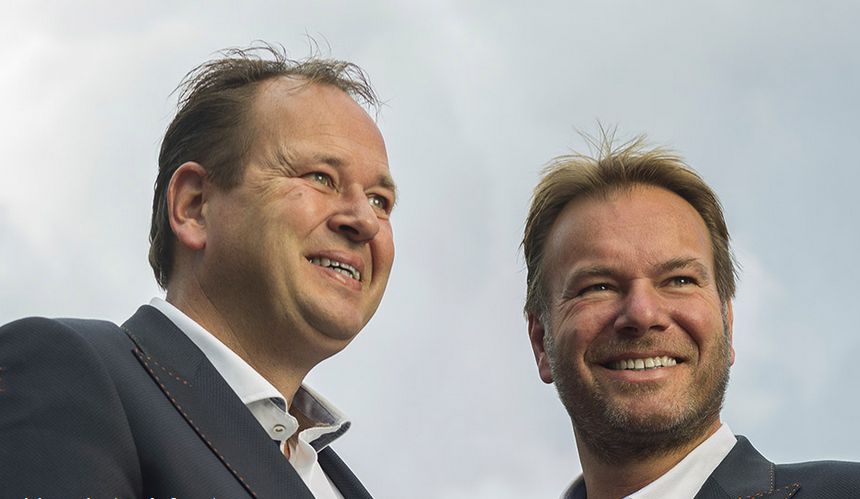 A Visit To The Grönefeld Watch Manufacture

This past October, I had a chance to visit the Grönefeld watch manufacture in Oldenzaal, Netherlands. Near the German border, this town of 32,000 which attained city rights in 1249 is home to the “Horological Brothers,” Tim and Bart Grönefeld. I first met them in 2013 and have enjoyed both their watches and their company each year at BaselWorld. So, I was eager to visit their manufacture – it was well worth the two-and-a-half-hour train ride from Amsterdam. Both Tim and Bart each have been interviewed as part of our “My First Grail Watch” series, Tim here and Bart here. 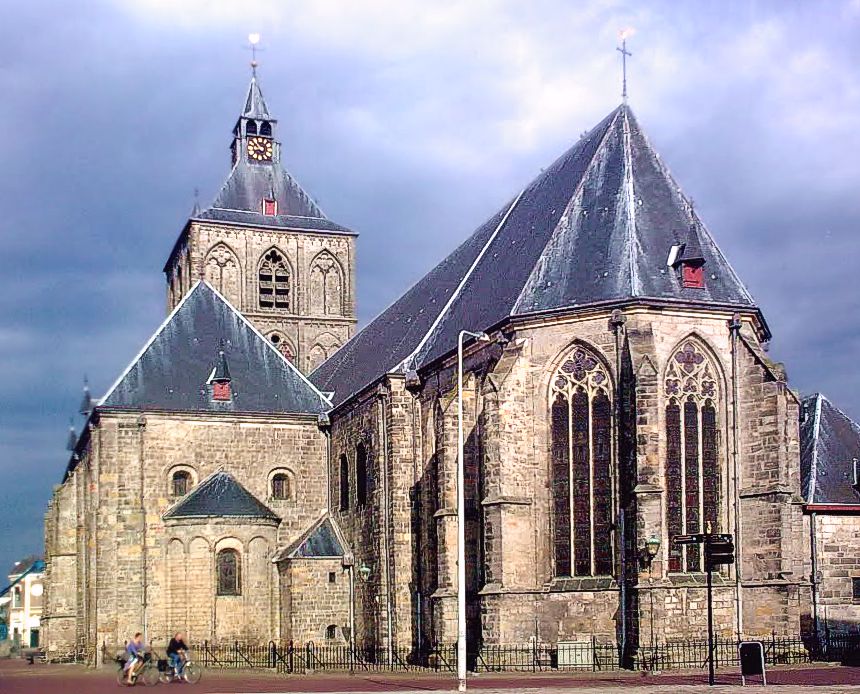 Across from their shop is where the family jewelry business is located. And literally a few meters from their shop in the center of Oldenzaal is Saint Plechelmus basilica with its tower clock that their grandfather Johan Grönefeld (who started practicing watchmaking in 1912) and then their father Johannes “Sjef” Grönefeld maintained. 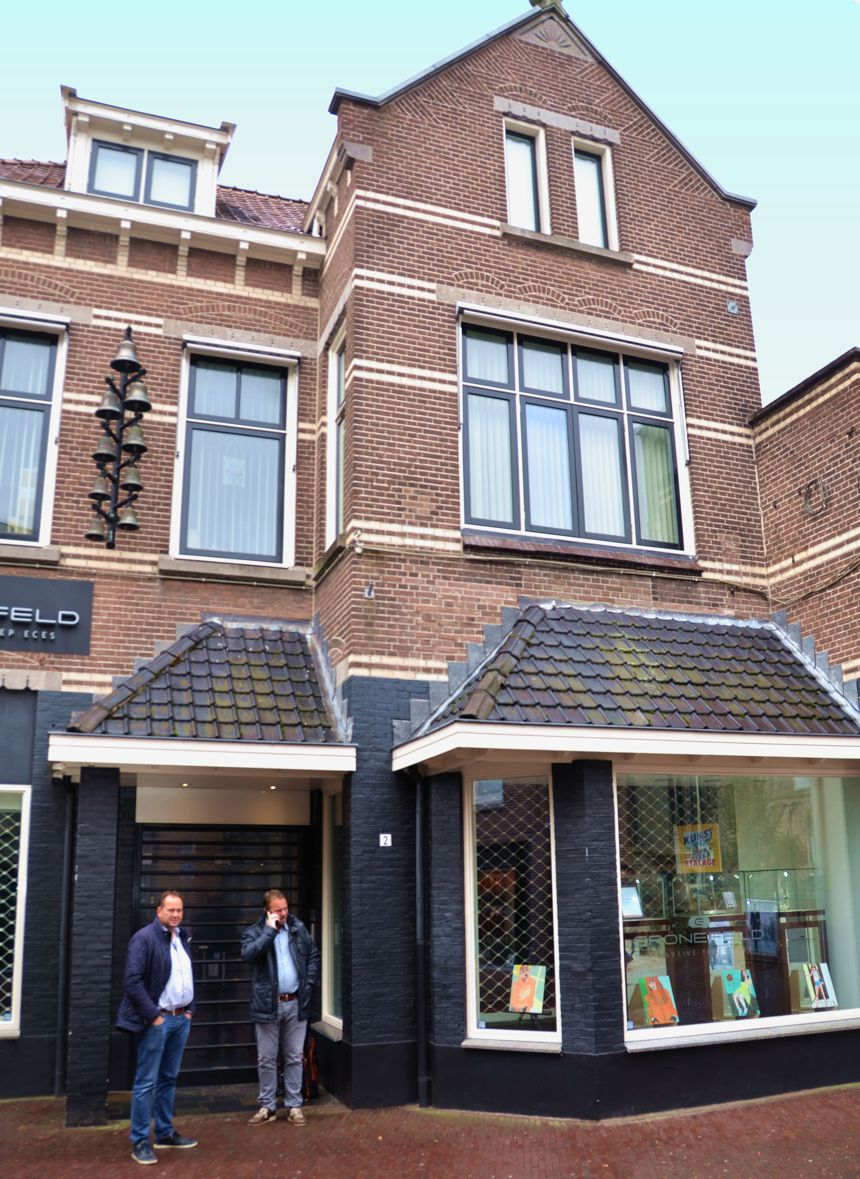 Bart trained in Oldenzaal and Rotterdam before attending WOSTEP. By the way, WOSTEP is widely considered to be the “finishing school” for already trained watchmakers around the world. Bart also worked in London before joining Renaud et Papi in the early 1990s. His work on minute repeaters, chronographs, and grande sonneries prepared him for the Grönefeld watches he and Tim would later produce.

After leaving the same technical school as Bart in Oldenzaal, Tim attended Vakschool in Schoonhoven and followed his brother to Renaud et Papi where he soon assumed responsibility for the training of other watchmakers. Subsequently, Tim was also placed in charge of the assembly of tourbillons and regulating escapements. 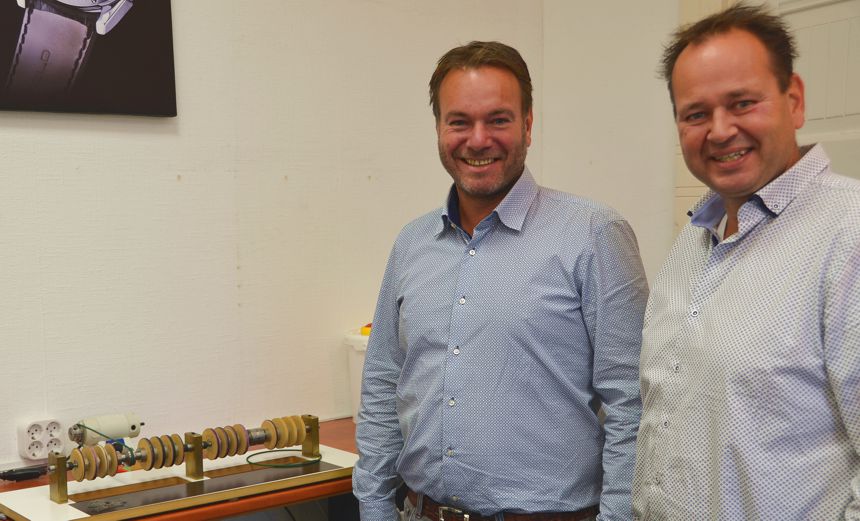 After a number of years working with Renaud et Papi in Switzerland (now owned by Audemars Piguet), Bart, who is the elder brother by 3 years, informed them that he intended to move back to the Netherlands. And he asked if they would have any work that he could do for them when he returned home. The answer was yes, and Grönefeld began as an outsourcer to Renaud et Papi. Only later did they start to produce watches under their own name.

Since then, the relationship with Renaud et Papi has become a two-way street as Renaud et Papi supplies movement parts custom-made from Gronefeld designs to Bart and Tim. In fact, they are the only watchmakers who receive OEM parts from Renaud et Papi – all other customers receive only completed Renaud et Papi movements. The brothers also have a finishing tool produced by Renaud et Papi which is the only one like it outside of Renaud et Papi. 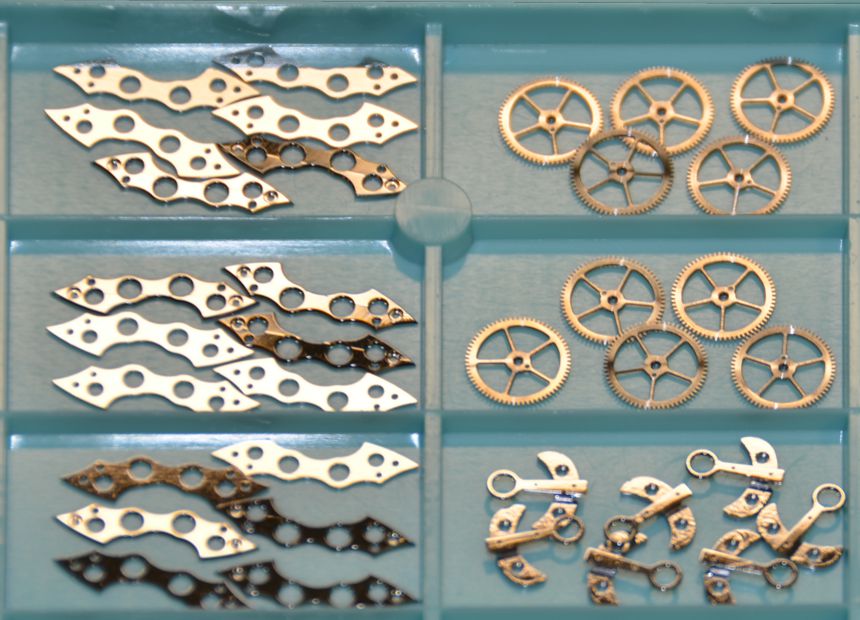 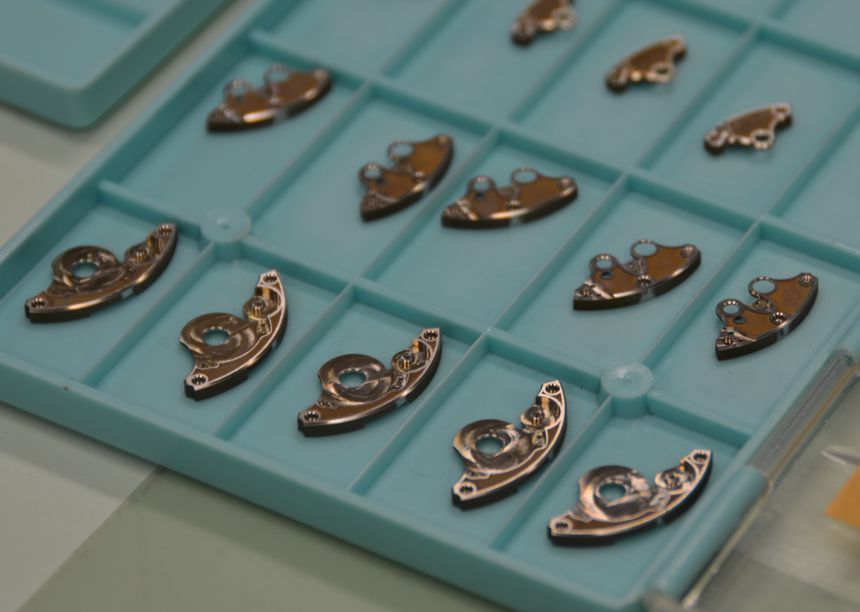 And Renaud et Papi is not the only one the Grönefelds do finishing work for. While I’m sworn to secrecy, I was impressed with the well-known watch brands for whom they do work. When I asked Bart why these brands have them do these meticulous jobs for them, he replied simply that “we can do it and we are good at it.” 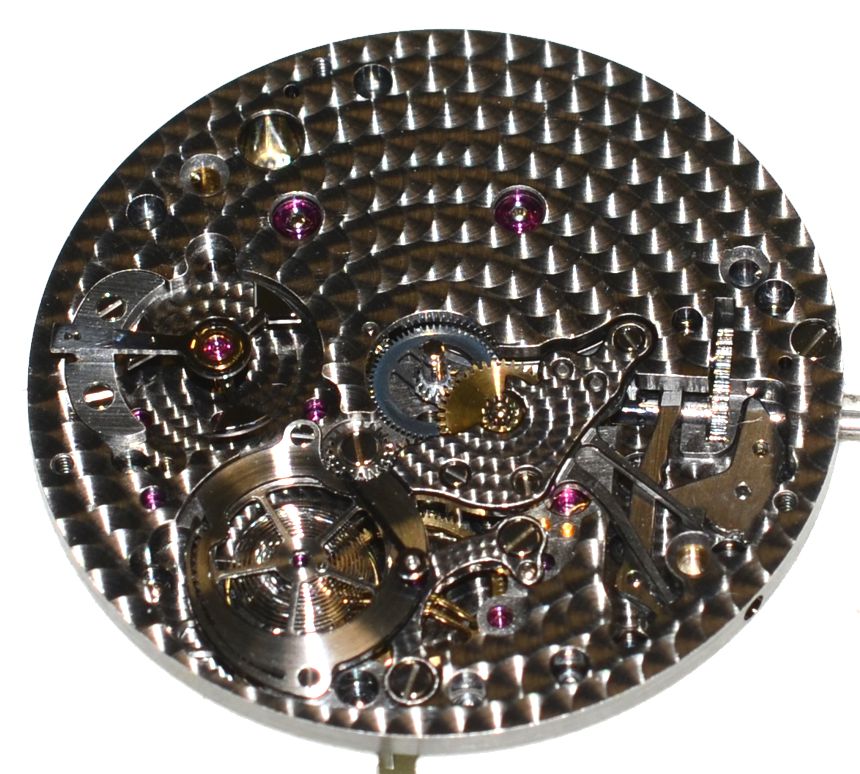 Dial side of Grönefeld 1941 Remontoire Movement

And this brings us to a little-known aspect of the European watch industry – that a lot of cooperation behind the scenes still goes on these days. Watch brands like to tout their in-house capabilities and vertical integration, but the reality is that specialty jobs are sometimes outsourced to trusted partners, some of whom are competitors on paper. 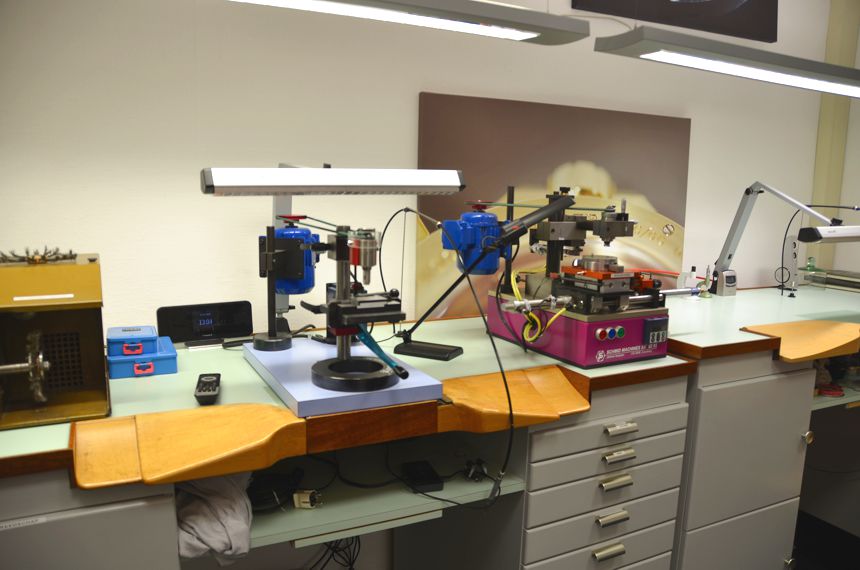 Bart and Tim are surprisingly open about the people they partner with and do work for – the exception being where they are bound by NDAs. In particular, they are happy to talk about cooperating with other independent watchmakers such as Stepan Sarpaneva, who called to chat with Bart while I was at their shop, and Kari Voutilainen. They also wanted to point out that some of the hard core engineering (gears and such) on their movements was done by Andreas Strehler. It’s almost like a club of friends within the ranks of the AHCI who don’t really see each other as competitors. 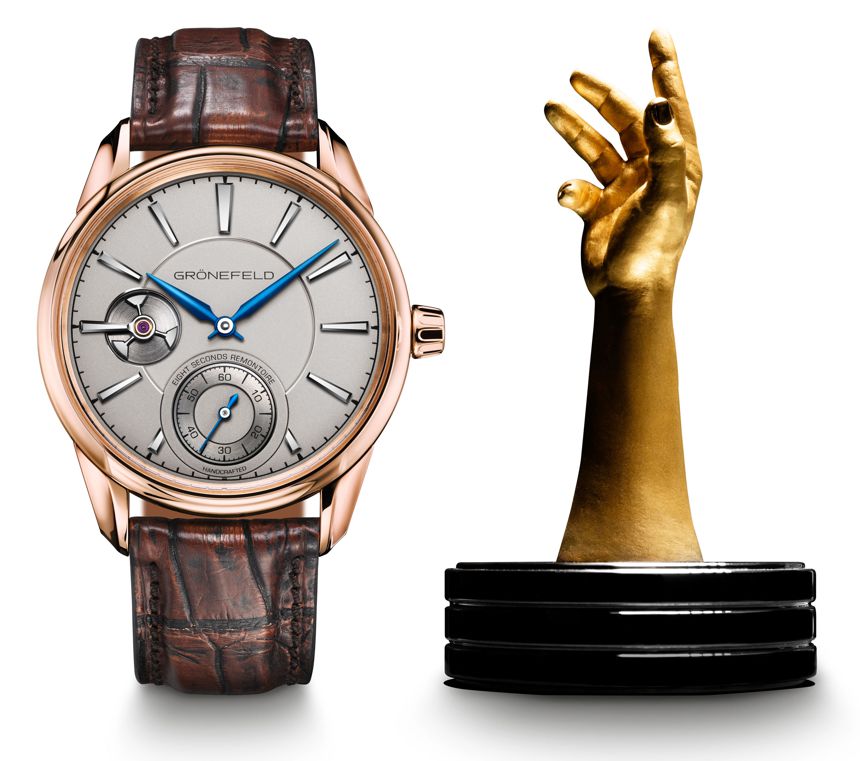 In November 2016, the Grönefelds again won the Grand Prix d’Horlogerie de Genève award, this time for their 1941 Remontoire watch which was voted the best in the “Mens Watch” category. Besides watching the visible portion of the remontoire at 9 o’clock on the dial whir every 8 seconds, when it recharges the extra hairspring which powers the actual assortment, there is a hidden treat – the minute hand is semi-dead beat. It advances every 8 seconds as well. So if you look closely, you can see it jump seven and a half times per minute and it does not move between those 8 second intervals. The seconds hand at 6 o’clock, on the other hand (pun intended), sweeps normally. 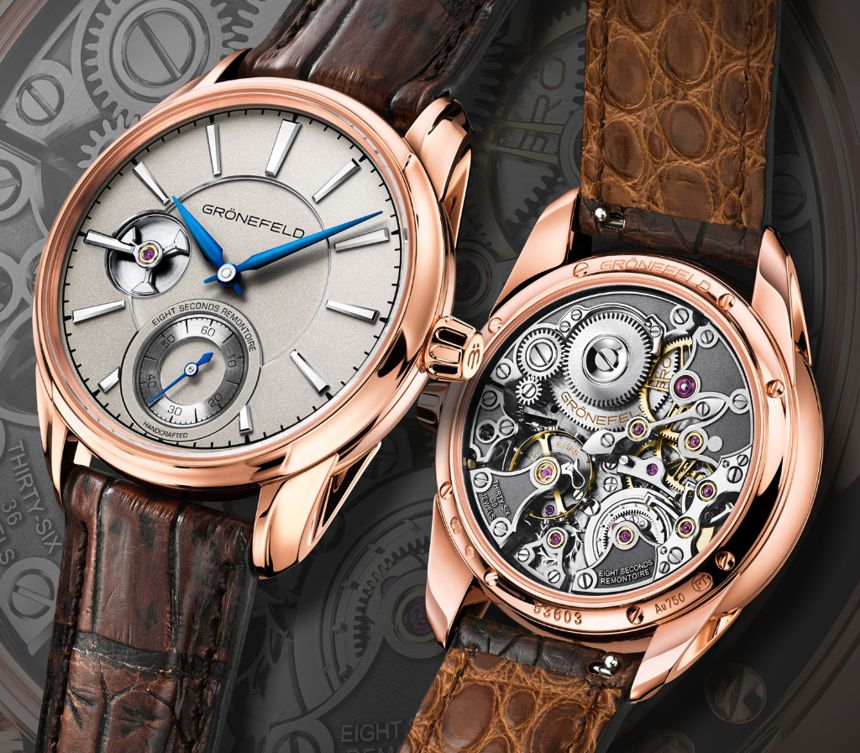 While I was at their shop, we had wide-ranging discussions about the watch industry and how current industry issues have, and have not, affected them. Prior to the financial crisis of 2007, their staff was a bit larger than it is today, roughly a dozen employees plus Tim and Bart. The 2007 downturn of the world economy did shrink their business for a few years, but these days they are back to full staff and growing, although at a controlled pace – it takes years for an otherwise trained watchmaker to attain their standards. I asked if the changes in the Asian market (China in particular) affected them and they said “not really,” as China never represented a large part of their business.

When we talked about retailers, they said that they only like to cooperate with the best retailers in the world. In particular, those who are used with dealing with independent brands. Unlike some brands, the Grönefelds are not looking to expand their retail presence for its own sake. They find that working closely with their current retailers (doing events with them, for example), plus watch fairs and also having direct contact with established customers seems to be the best fit for them. 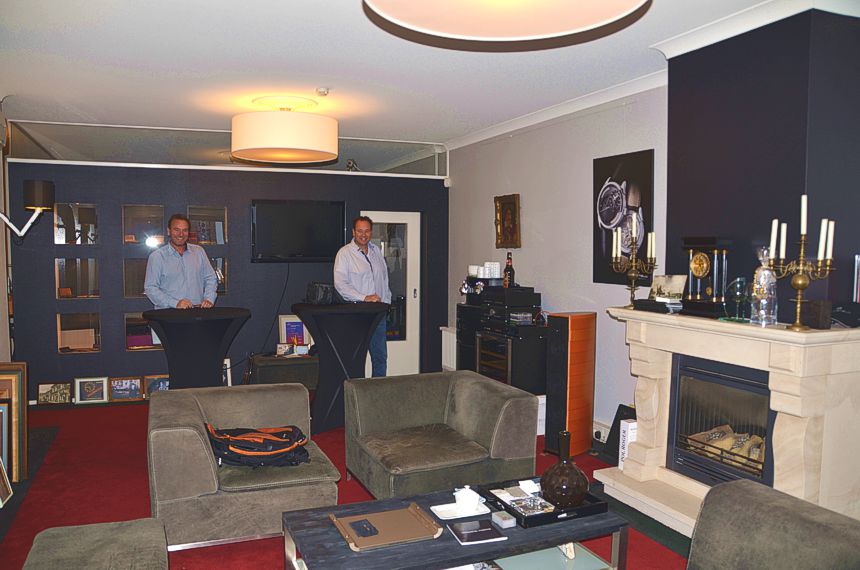 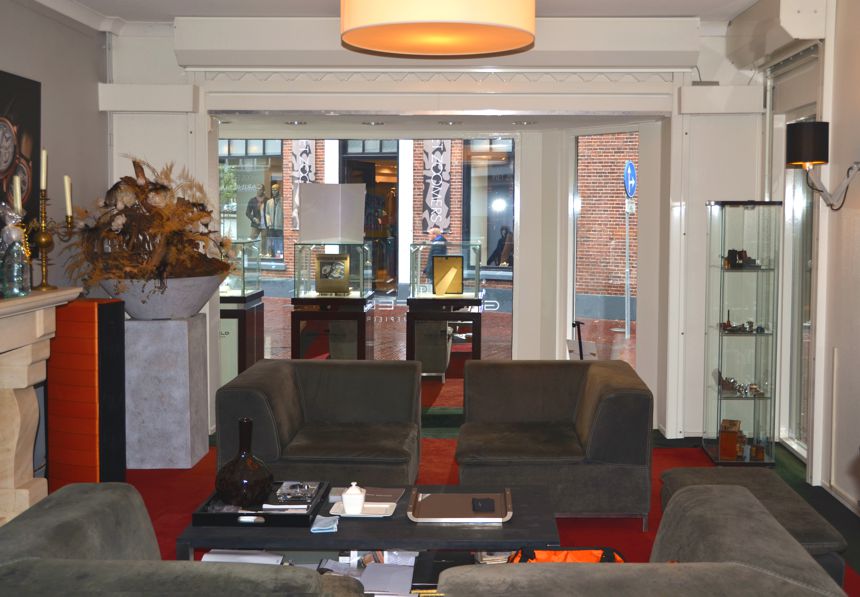 At one point in the past, the reception area on the ground floor of their shop was a “retail” watch shop where they had their watches along with some from other independents. However, Oldenzaal is not a major watch buying destination, to say the least, so they don’t operate that space as a walk-in retail shop any longer. They do receive customers there by appointment.

Okay, let’s go upstairs do where the real action is…