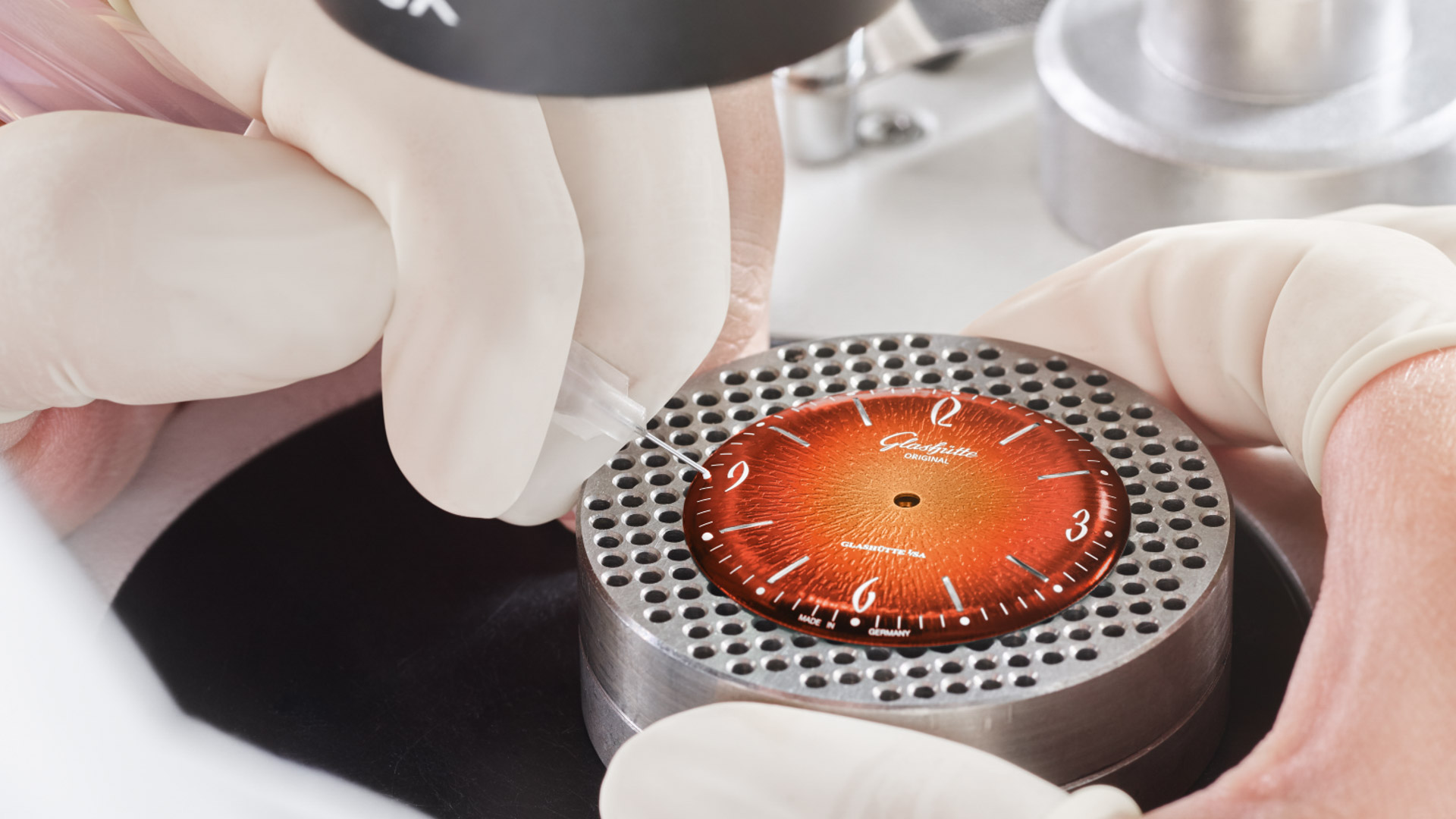 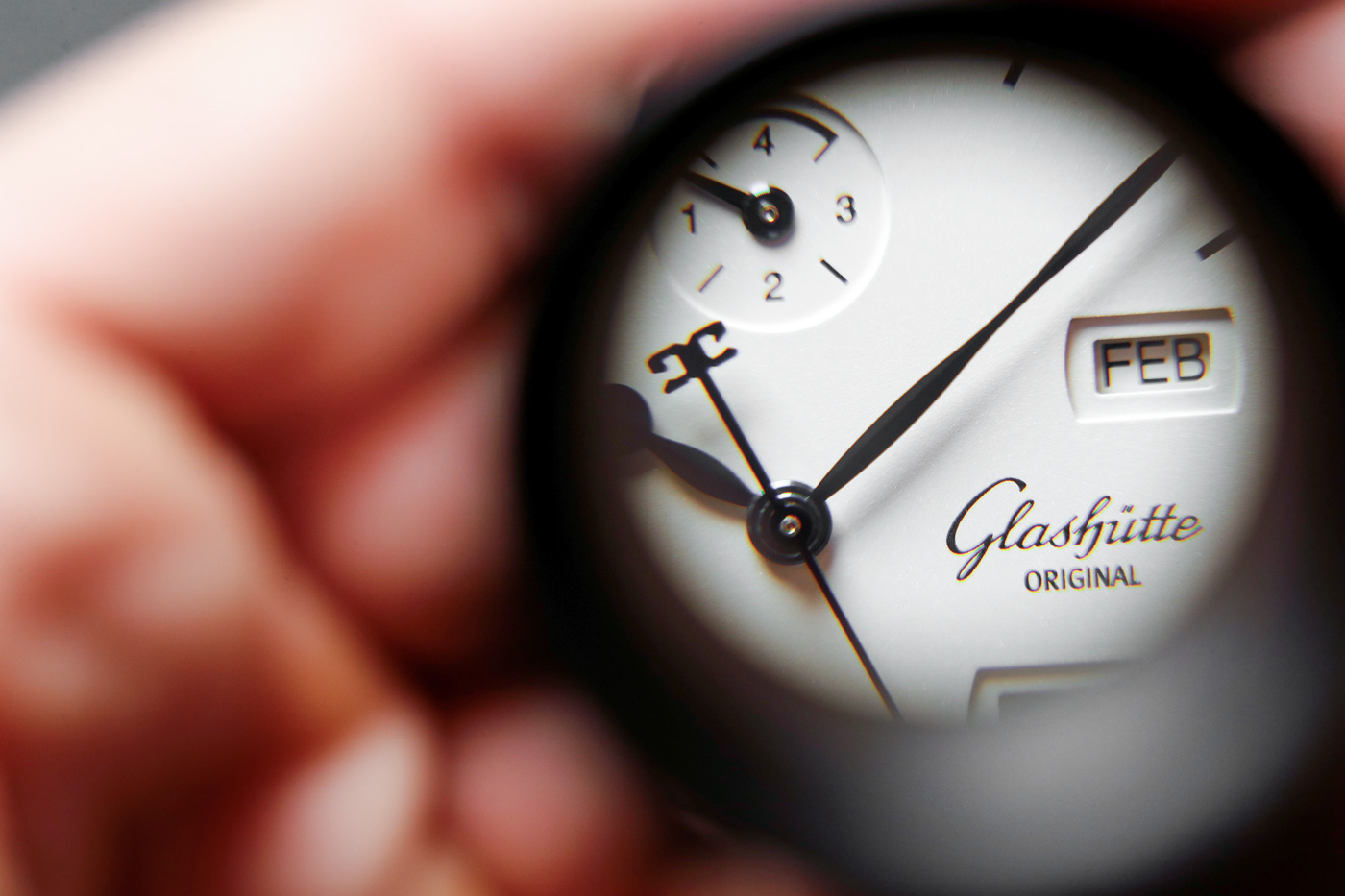 Almost two years back, we paid a virtual visit — and a truly in-depth one, at that — to the Glashütte Original Manufactory at the Saxon headquarters of the company. There, we discovered how watch movements are designed, manufactured, decorated, and assembled. Today, we follow up with a special look inside Glashütte Original’s other proprietary, wholly owned facility: its dial manufactory in Pforzheim, situated a good number of hours away from its headquarters in the federal state of Baden-Württemberg, in southwest Germany. It is here that all Glashütte Original dials are made, with exceptional care and a combination of irreplaceably traditional, as well as state-of-the-art, manufacturing know-how and machinery. 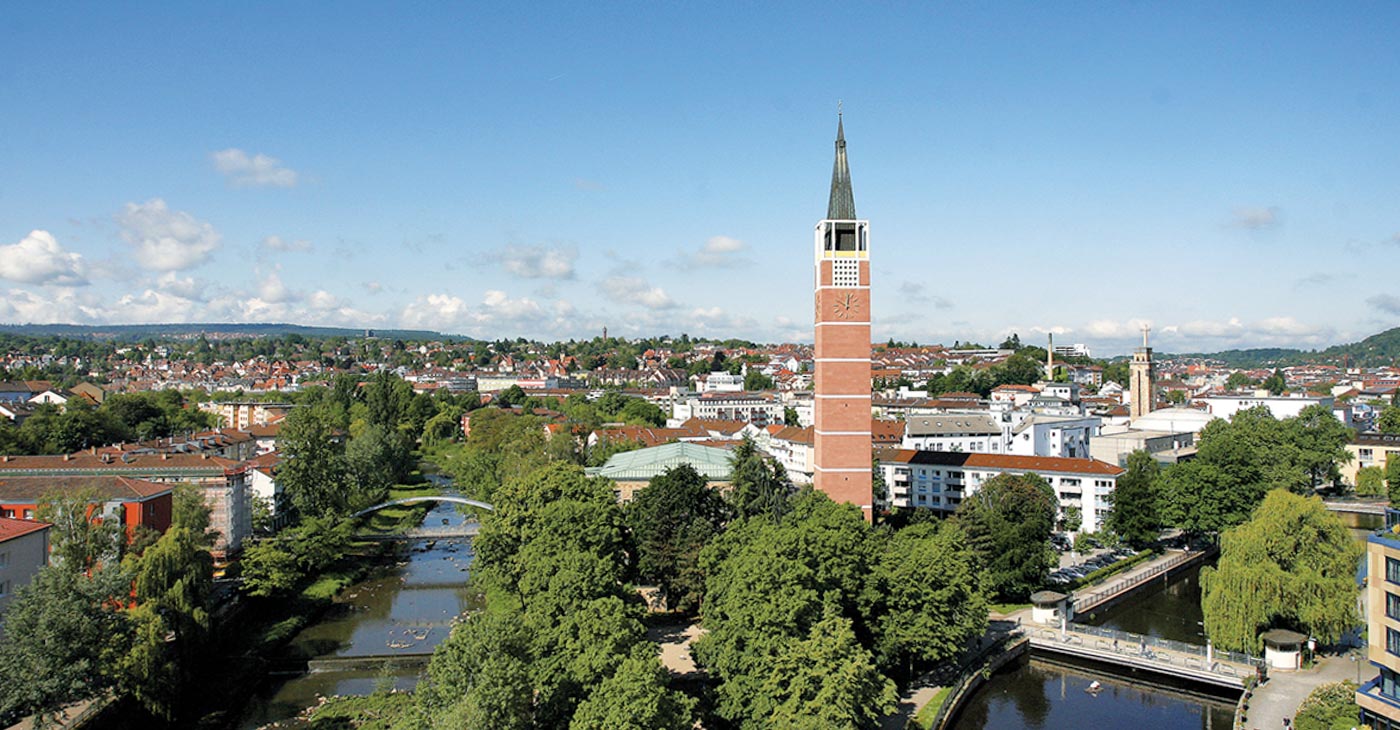 Nicknamed as the Golden City, Pforzheim is an historically important watchmaking and jewelry hub in Germany, with specialized industrial roots leading back to 1767. In 2017, Pforzheim celebrated its 250th anniversary as the Golden City. Today, the city accounts for nearly 70 percent of the total German jewelry and silverware sales, with over 80% of all jewelry that is exported from Germany crafted here. 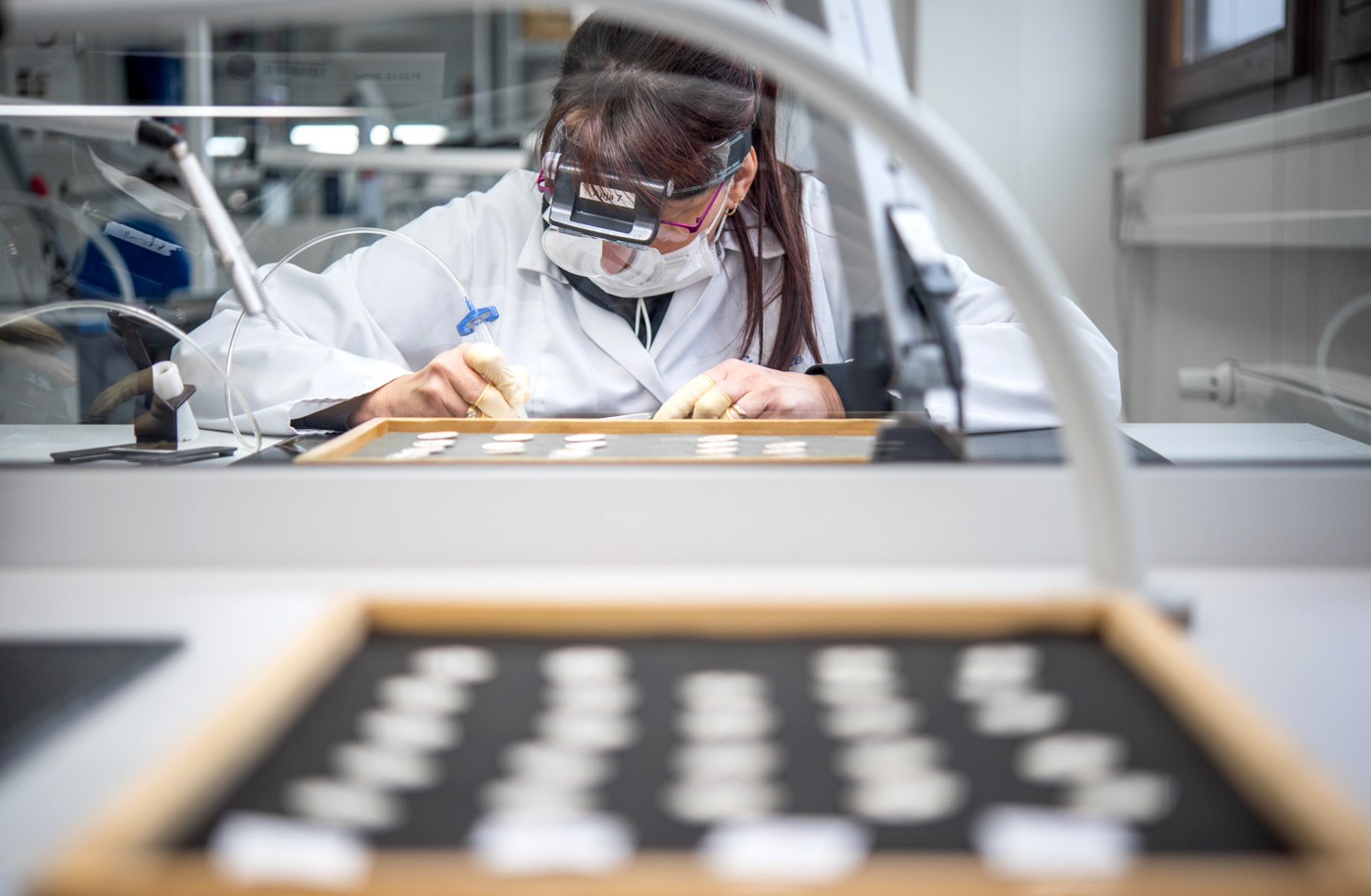 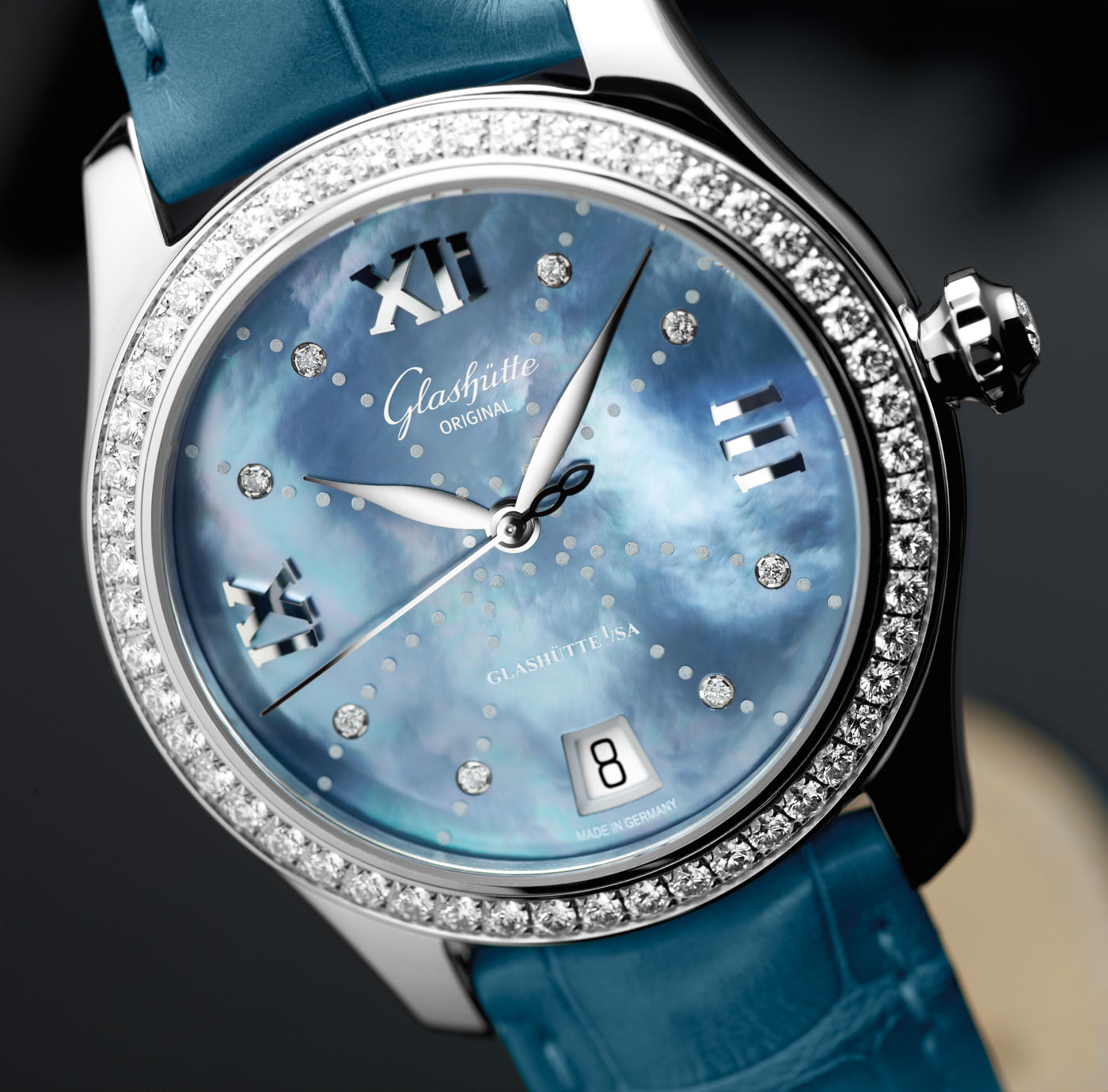 It is no surprise, then, that one of the most jewel-like components in any true luxury timepiece, its dial, is also crafted here for every Glashütte Original watch. Whereas cases are exposed and, therefore, need to be robustly designed and made, watch dials live in a perfectly isolated space and are only removed from their terrarium once in a blue moon, when the watch is serviced — and even at times like these, the dials are handled only by the trained and cautious hands of a Glashütte Original watchmaker — and nobody else. So, while the finely crafted Glashütte Original movement often remains the center of attention, there is just as much beauty and delicacy to be cherished in these magnificent dials. 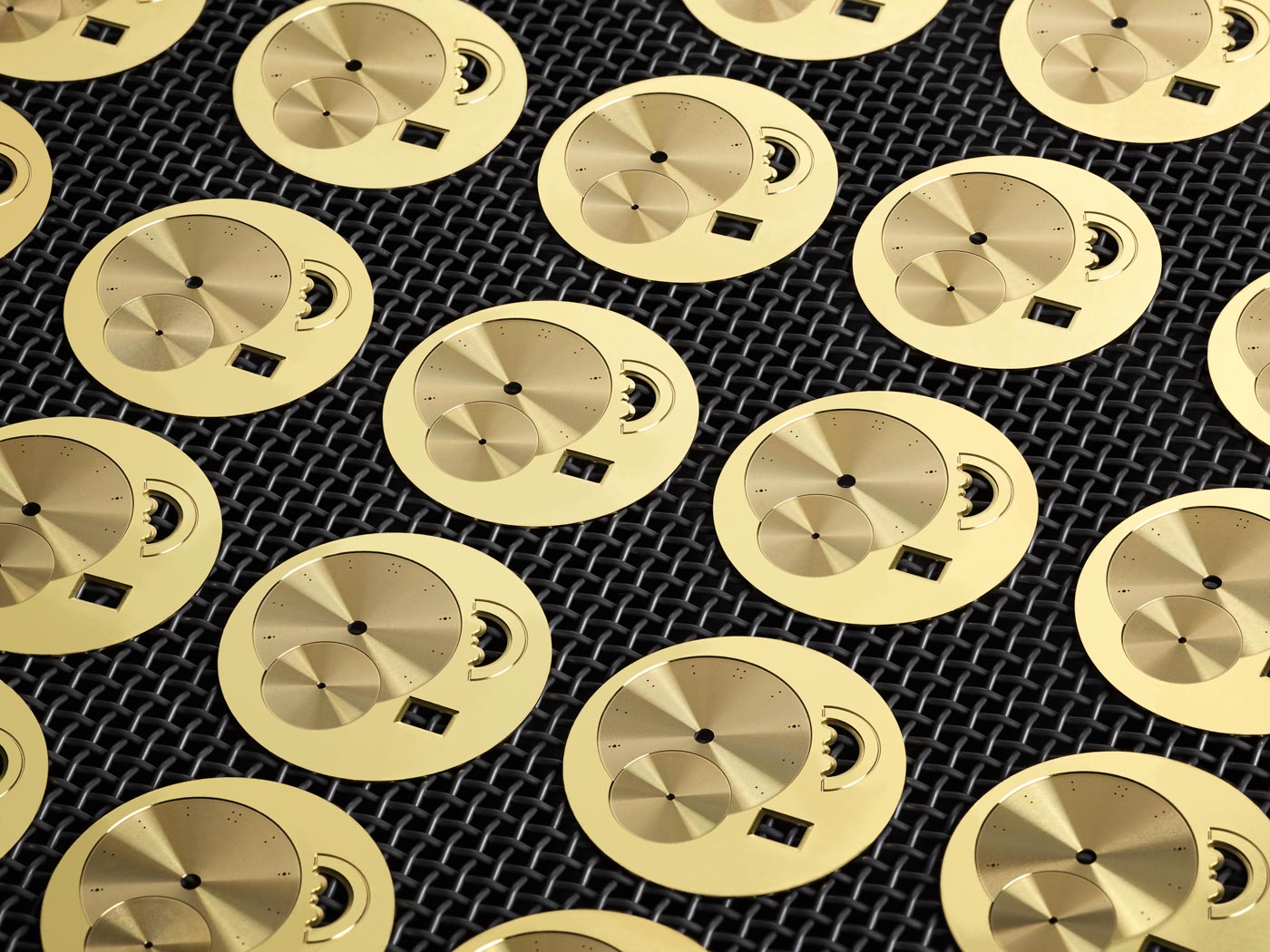 More importantly, a dial is often called “the face of a watch,” and rightfully so. A watch dial not only fulfills its practical duties, but is also expected to be on par with the excellence attained by all the other more frequently discussed components of a timepiece. Glashütte Original’s Manufactory calibers display a wide range of exceptional finishing techniques and proprietary engineering solutions — all raising the bar for the Zifferblatt, as it’s called in Germany. As we shall imminently discover, the creation of an ultra-high-end watch dial is as complex and challenging as the manufacturing of a fine watch caliber. 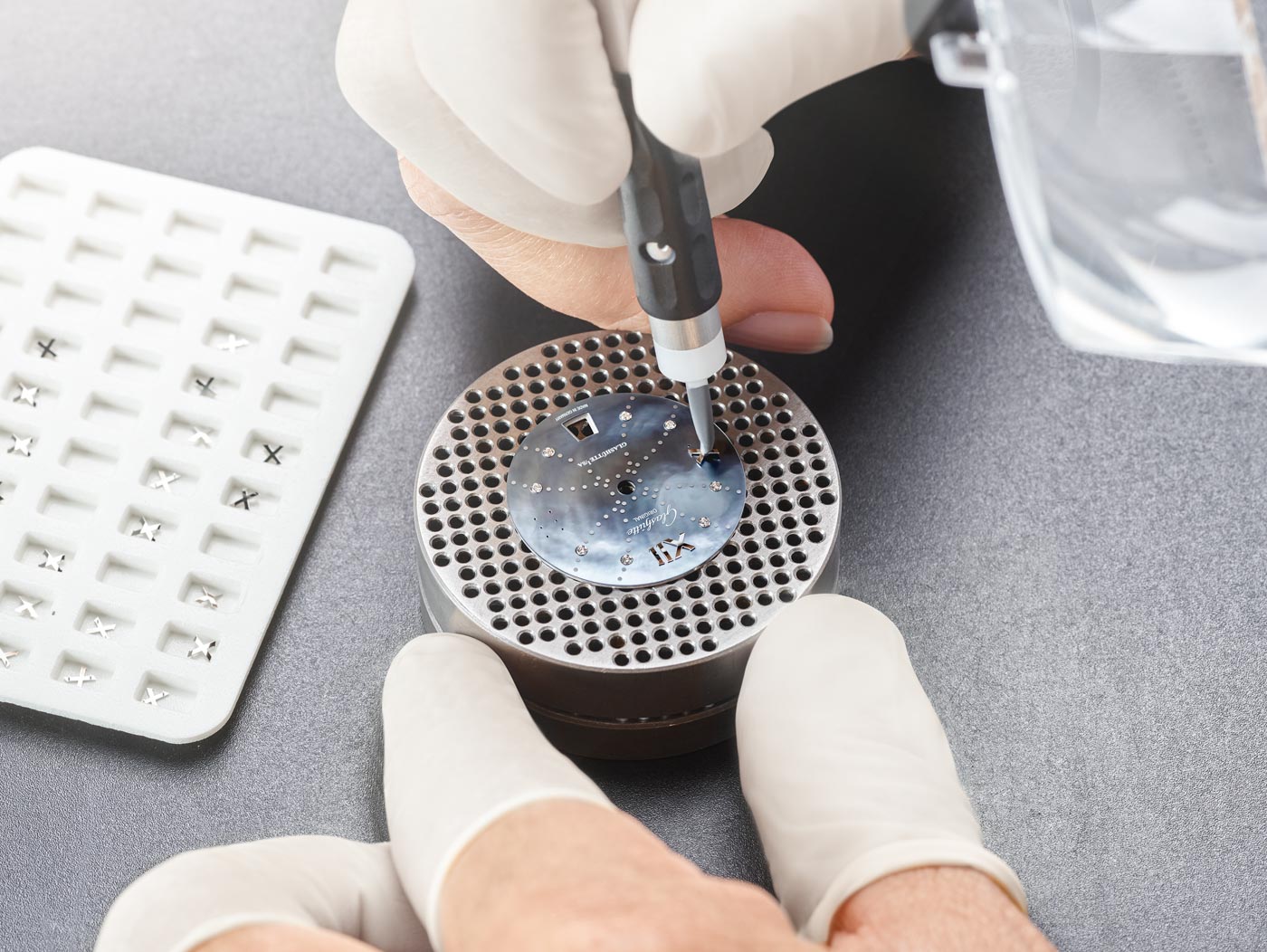 Dials begin their lives on a blank piece of paper or on a computer screen, as Glashütte Original’s designers make their first brushstrokes over a new design. Many of the current dial aesthetics pay homage to the company’s rich and longstanding heritage of nearly 175 years. In these instances, their sources of inspiration come from the Glashütte Original archives that are notably shared with the German Watch Museum Glashütte, situated just a few minutes by foot from the Glashütte Original Manufactory and Headquarters. 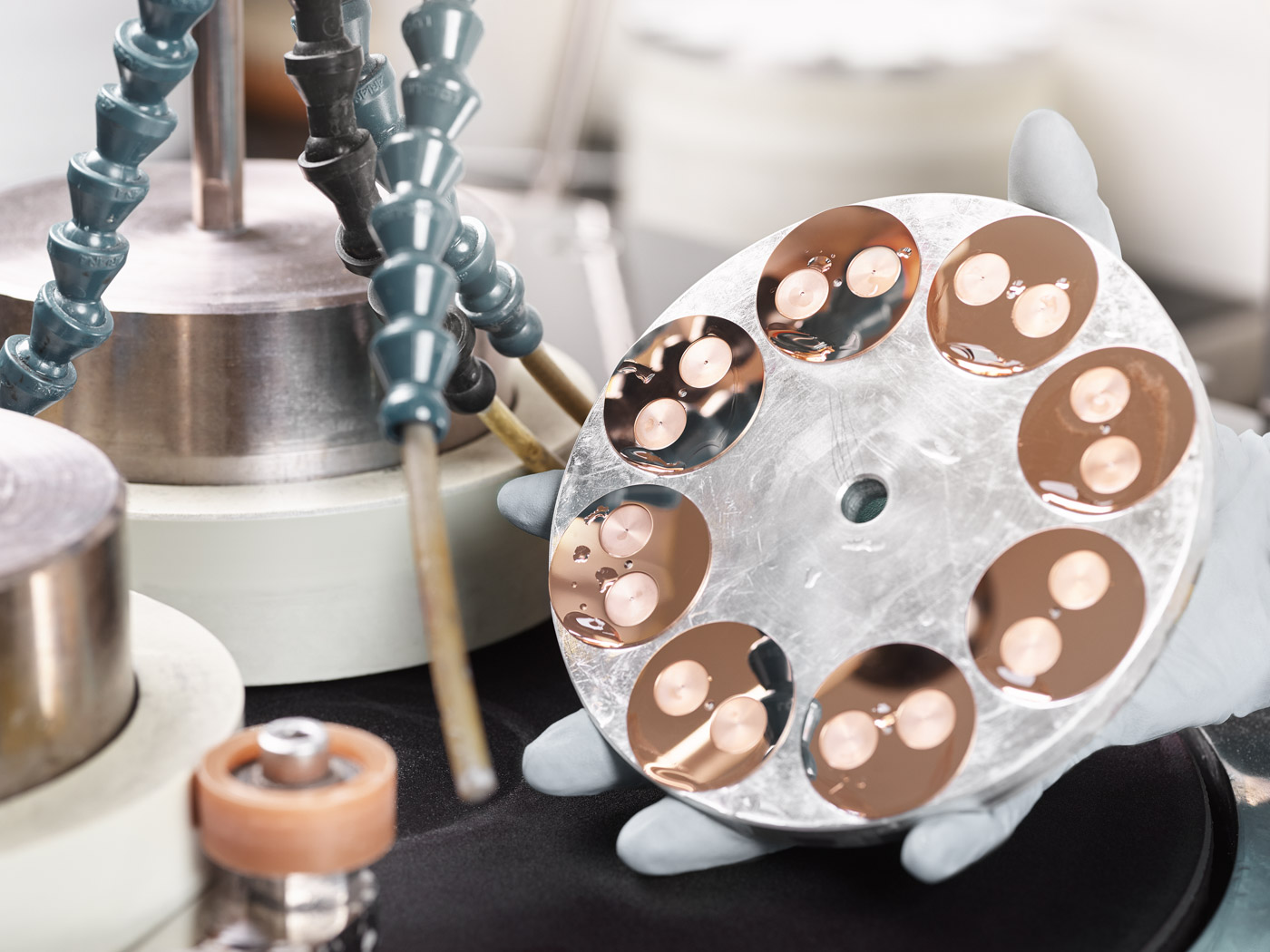 Nevertheless, an important aspect to remember is that dials do not exist in perfect technical isolation. Designed in conjunction with the required feature-set of its underlying caliber, as well as the determined style, mood, and inspirational era of the watch, a well-thought-out dial is as much a technical and practical achievement as it is an aesthetic one. It fulfills two main purposes: It serves as a mask, concealing those components of the movement that are, sadly, hidden to ensure optimal legibility of the watch movement’s indications; and the dial also serves to make up for the lost eye-candy by introducing its own beautiful details that more than make up for all that’s been concealed. 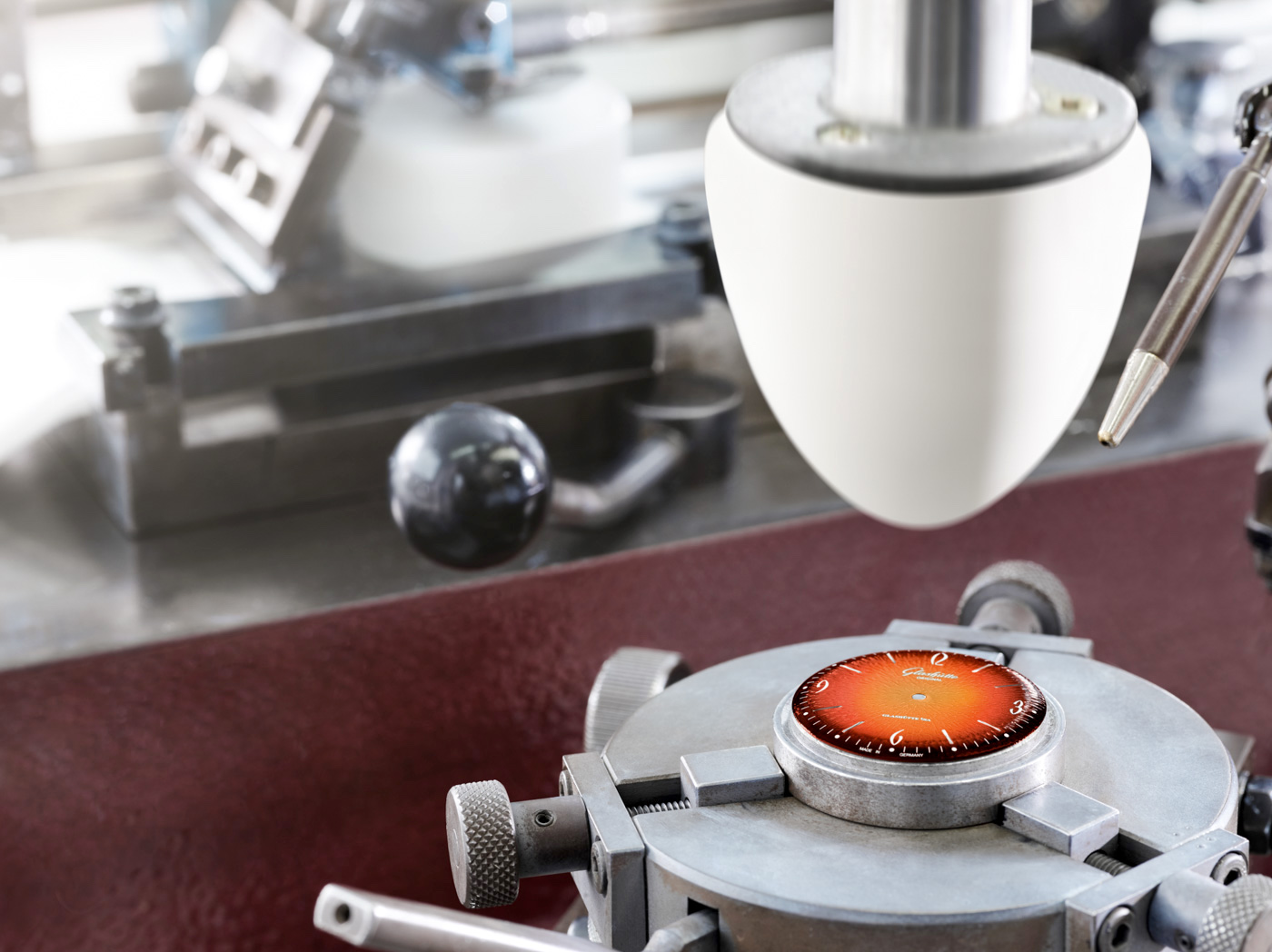 Not an overstatement by any stretch of the imagination: A dial is a piece of art unto itself, and that is precisely why these are crafted in a facility dedicated to this single task. Mixing dial manufacturing with any other process used for any other component of a fine watch is out of the question — the art of dial-making very much demands that it is provided its dedicated space, team expertise, know-how, and approach. 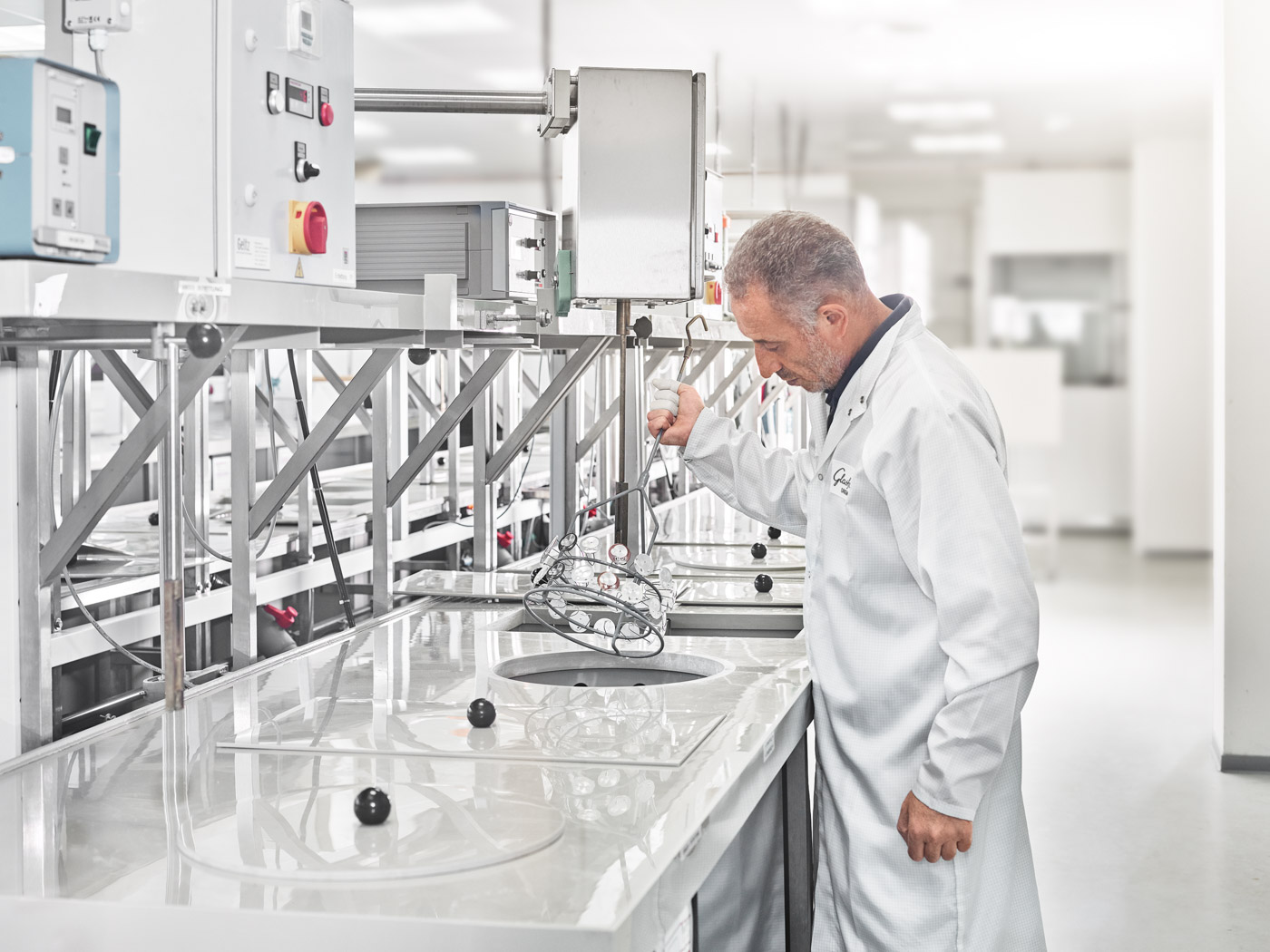 We said “just one single task” but you already knew that was a figure of speech. There are up to 75 steps that make up the production process of one single dial.

Watch dials, once their appearance and technical properties have been finalized through painstaking design tweaks and prototyping, begin their lives as blank sheets or “ribbons” of metal, namely brass or, in the case of some Glashütte Original timepieces, German silver. German silver is an alloy of copper, nickel, and zinc — it does not, in fact, have any silver in it — that gives off a special hue when compared to other metals more frequently used in watchmaking. 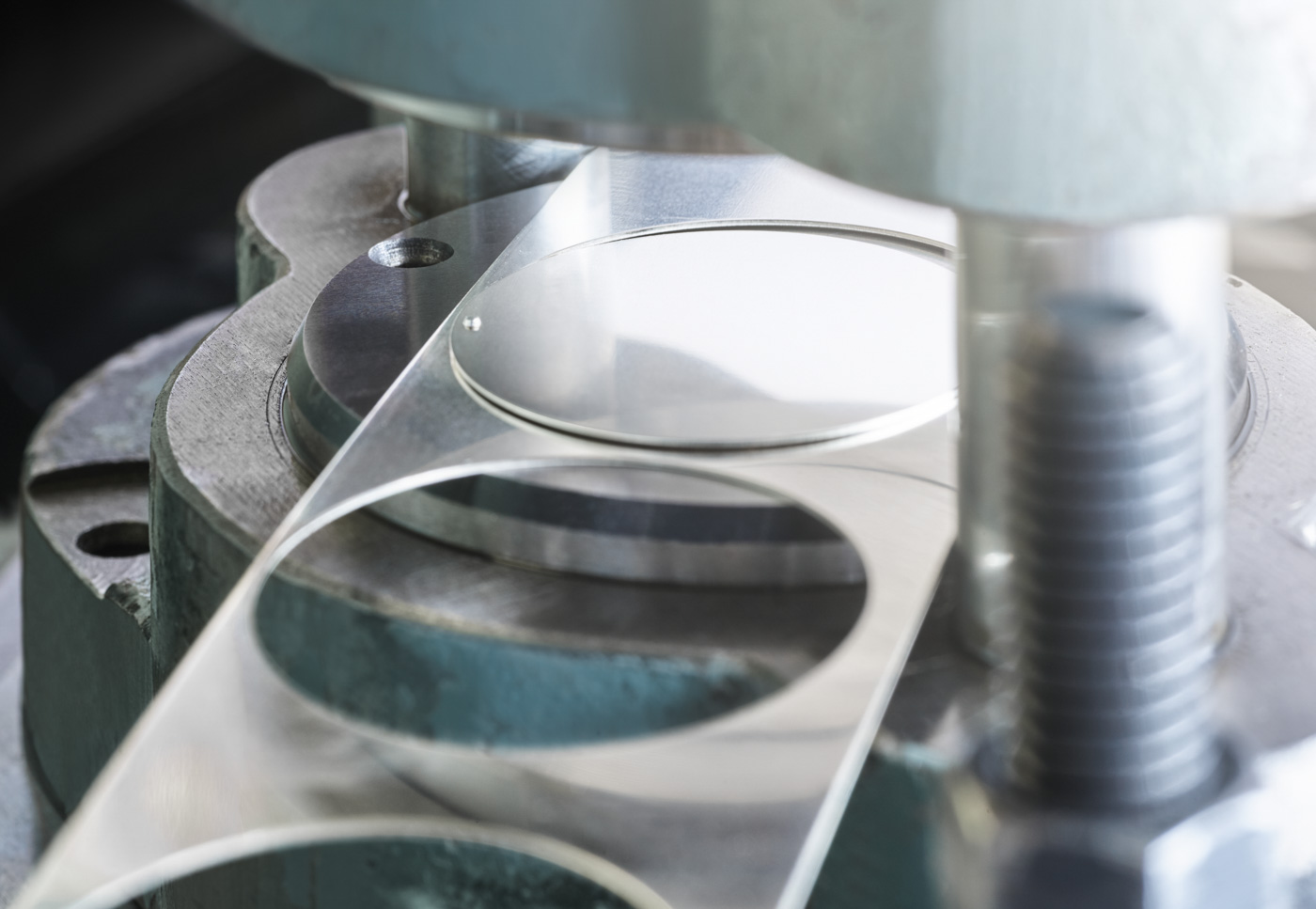 From these ribbons, preliminary stamps are produced. Massive machines capable of exerting tremendous pressure appear to gently squash these strips of metal — so gently, in fact, that they do not even punch through them. Merely an outline is created, something that allows for subsequent procedures to more accurately and carefully extract the dial from what once used to be a block of metal. 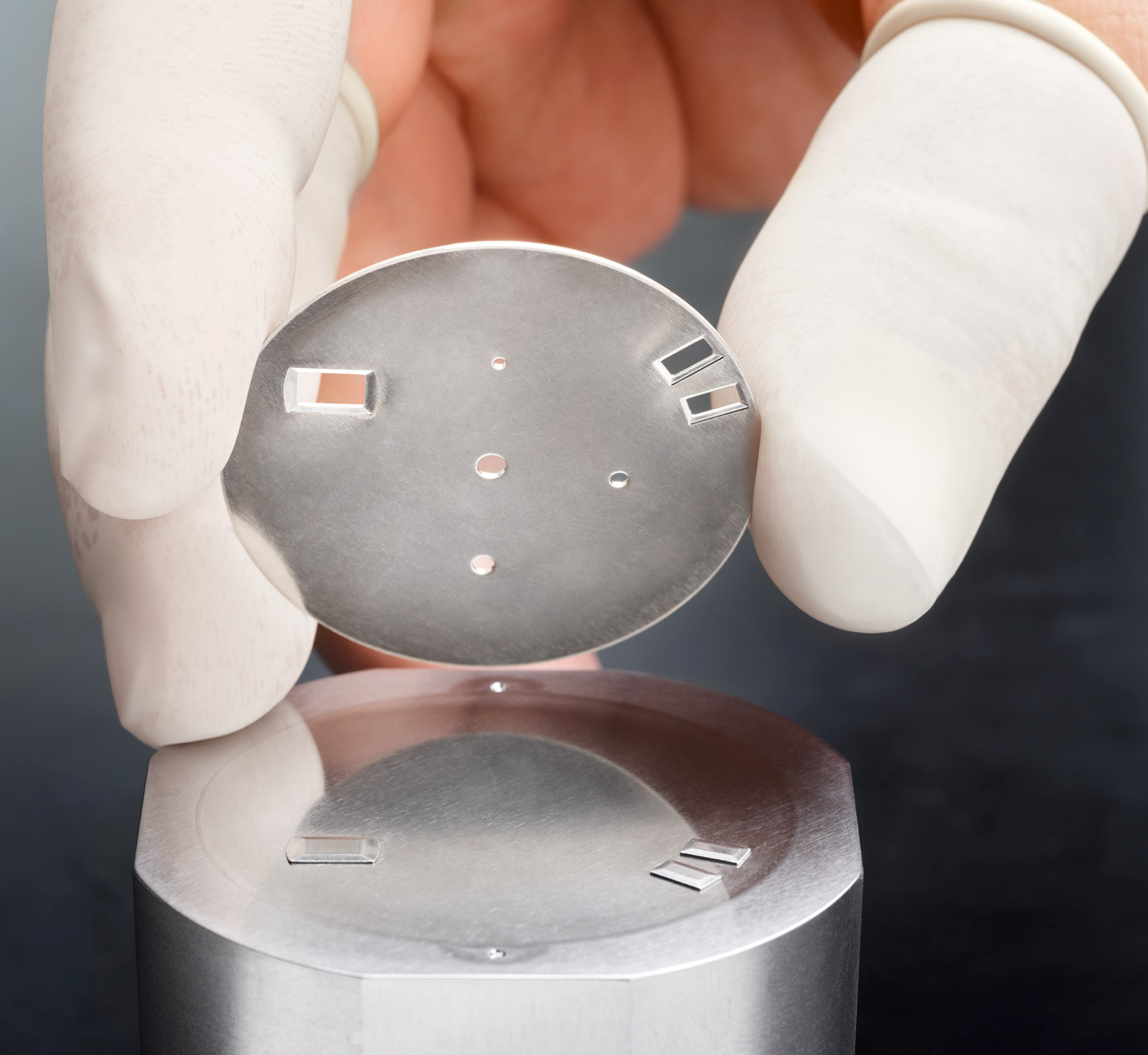 Further stamping procedures ensue, all designed to even more accurately define the final shape of what will ultimately be the face of a Glashütte Original dial. Different types of machines are used by trained operators who assess the workpiece before and after they perform their respective tasks. Relying on their trained eyes and tireless attention to detail, they catch any imperfections or irregularities, so as to only pass a workpiece on to the next station if it is absolutely perfect. There is a lot to be done yet, and performing work on a dial that will ultimately fall short of excellence in its properties is a waste of tremendous effort.