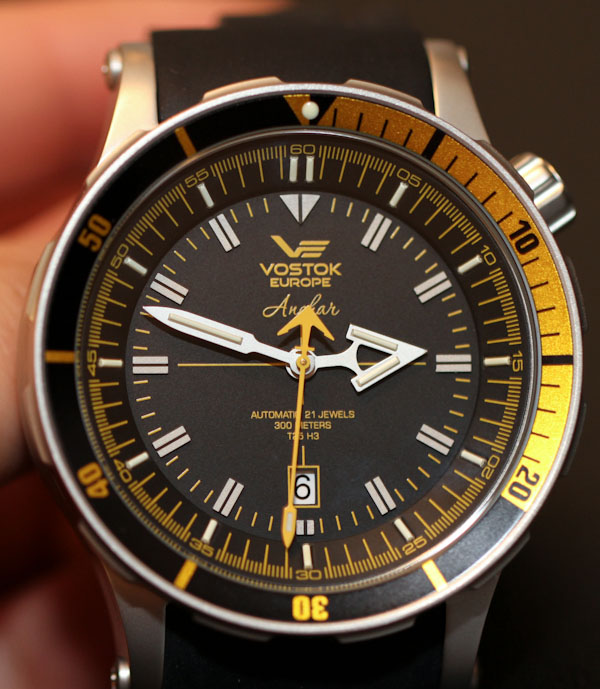 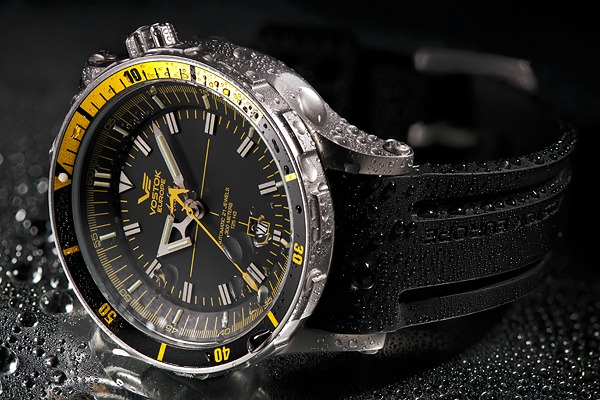 Without a doubt, the design of the Vostok Europe Anchar allows it to be greater than the sum of its parts. Read off the list of tech specs and it sounds like a thousand other sub-$1000 dive watches on the market. See it however, and it feels like something much more unique. Is it right for you?

Vostok Europe is a curious company that I understand as being a Lithuania-based off-shoot of the more historic Russian watch maker Vostok. Vostok Europe don’t use the traditional Vostok-base movements, but rather calibers from brands such as Seiko. I suppose there is nothing inherently wrong with that, but for those wanting a more pure Russian watch experience, there are some better choices. Then again, aside from novelty, I don’t know how awesome it is to own a Soviet-era mechanical watch movement. Having said that, some of them are known for being built like a tank and equally as ugly. 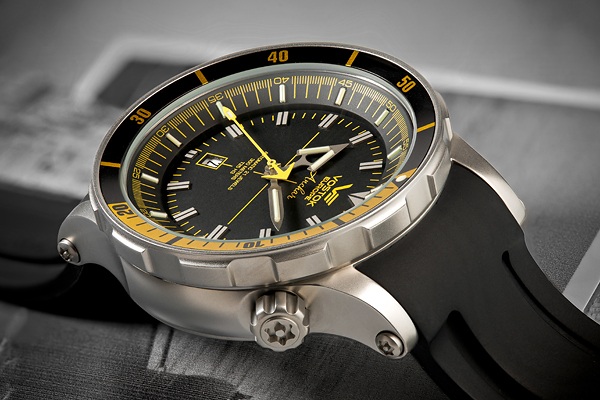 A couple of years ago, Vostok Europe came out with the Anchar. The name harkens back to the fastest submarine ever built, and yes it was Russian. Despite the removed nature of Vostok Europe’s relationship with actual Russian watches, the brand is still very much thematically connected to mother Russia. To be frank, I wouldn’t wear most of the Vostok Europe watches even though I like their designs. Does that sound strange? However, a few of their watches really speak to me. The Anchar is one of them. Since the collection’s launch I was curious about the piece, and later getting it on the wrist, I am not disappointed. Also, the Anchar comes in a lot of styles, this piece is the reference 5105143 with a mostly black dial and bezel with gold-toned accents. 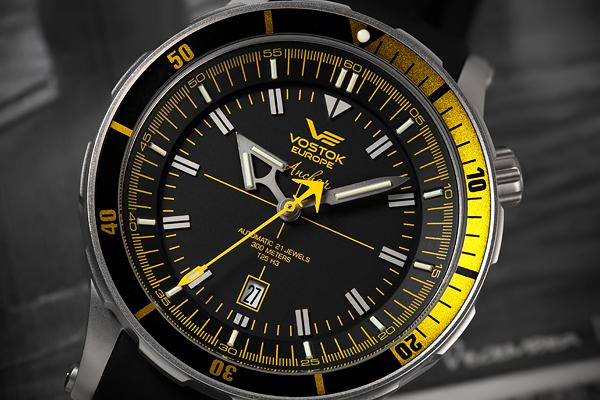 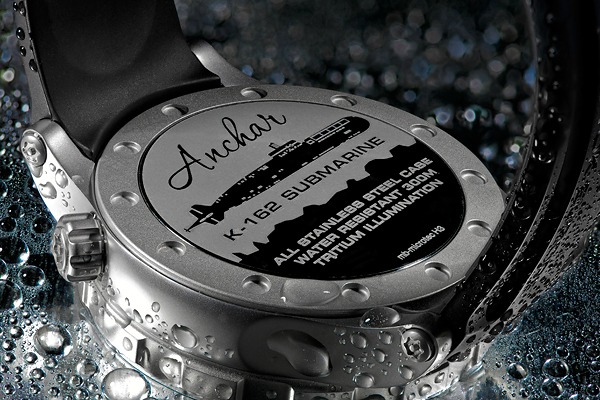 What do I really like about the Anchar? Two things really. The design and the feature set. But having both of those things together makes for a really interesting watch. It isn’t the best piece ever made for sure, even at this price range. However, the unique and well-conceived design make it worth your attention. The Vostok Europe Anchar is a big watch. Not too large for me, but for some people the 48mm wide case size will be overwhelming. The case is in sandblasted steel and it looks a bit like titanium due to the finish. The edges are soft, but the case still retains a tool-like persona. At 150 grams it isn’t incredibly heavy either. 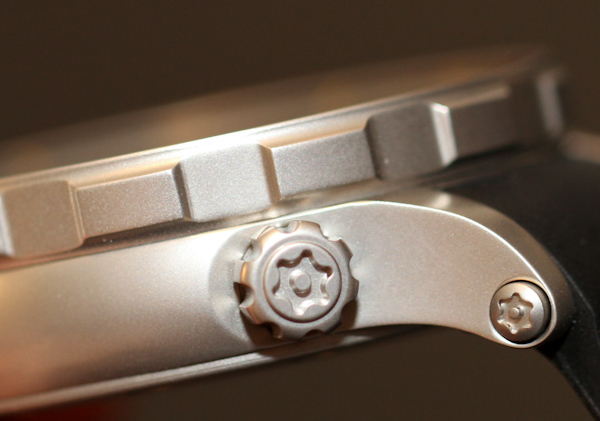 The wide case and tall bezel create a sort of valley for the dial. When looking down at the watch you see three sections that all visually work together and share a special instrument style that is really at the heart of the piece’s theme. The first ring is the bezel, then you have the flange ring, and finally the dial itself. While each section is rather distinct, they work together nicely. There is a nice balance to the elements here that has just the right amount of visual interest and open space for legibility. I have the same praise for the hands which are unique looking and legible – especially that cool looking “arrow” hour hand.

Another benefit located on the dial is use of Tritium gas tubes for darkness illumination. There are tubes on the flange ring for the hour markers and tubes on the hands. The layout of the hour hand tubes makes it easy to tell the hands apart in the dark – which I really like. Plus, taking the hour marker tubes off the main dial allows them not to interfere with the hands.

Vostok Europe makes the Anchar relatively durable with the case being water resistant to 300 meters. That and some other features such as the rotating diver’s bezel help make it a true dive watch. However, I believe the piece doesn’t have a sapphire crystal. But the mineral crystal it uses does have AR coating on it. On the rear of the case is an engraving of the Anchar submarine – which was designed in the 1960s. 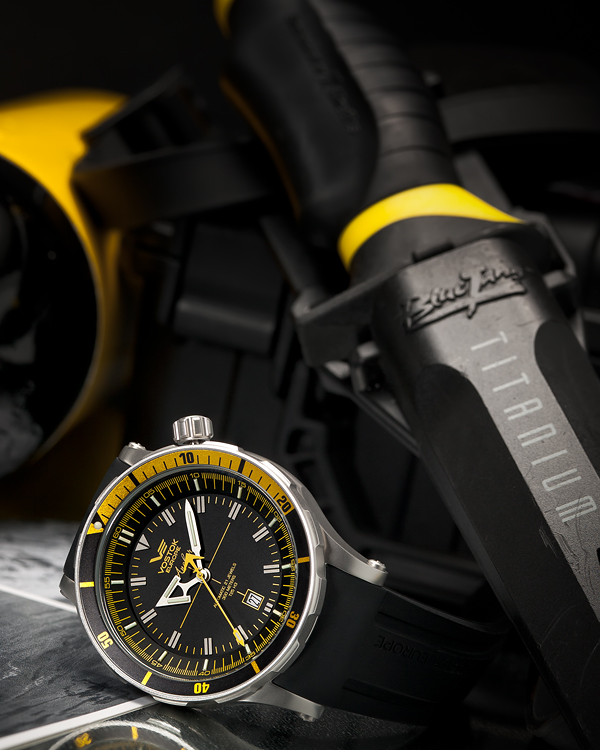 On the wrist the Anchar feels good. The crown is placed at 2 o’clock to keep out of your hand and you’ll notice the torx style screws in the lugs, and a mimic of that look in the crown – which was an interesting design touch. This model has a silicone strap, but leather strap versions are available as well. Overall comfort is high if you are OK with the size of the watch. There are actually a few models in PVD black cases which might make the size signature feel smaller.

Inside the watch is a Japanese Seiko automatic movement. Vostok Europe uses the Caliber NH25A from Seiko Instruments. This movement is rather durable and hardy, and includes the date. However, it isn’t the most accurate movement around a lot of the time. Seiko themselves rate the movement as being off by as much as 30 seconds a day. This is usually a liberal estimate, but even at 15 seconds a day accuracy you’ll still need to reset the time once a week or so. Also, the Seiko NH25A doesn’t manually wind (only via the rotor), which can be annoying. I think the Anchar would be much improved with a higher-grade Japanese movement inside of it. I think it would be an appreciated upgrade by the watch lover community for Vostok Europe to consider.

Accompanying the watch is a nice kit with the extra straps and changing tool. It all comes in a Pelikan-style waterproof case. The case is cool, but I still don’t understand why a diving watch needs to come in a water resistant case. Wouldn’t those be best for watches you don’t really want to get wet? The Anchar is actually a limited edition – with this piece being produced in a batch of 1000 pieces. Price via Vostok Europe’s website for this version of the Anchar watch is 419 Euros (about $545 US dollars)