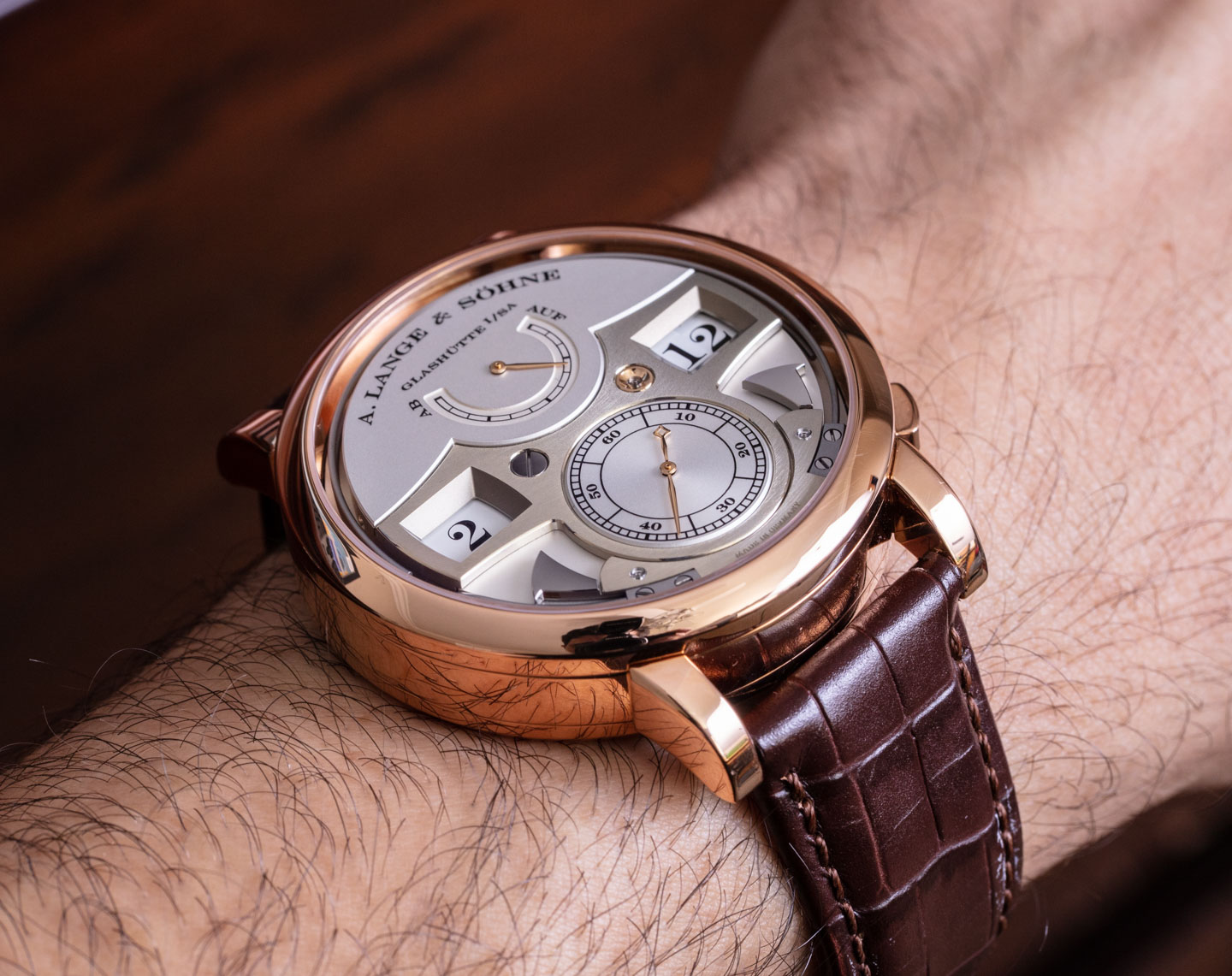 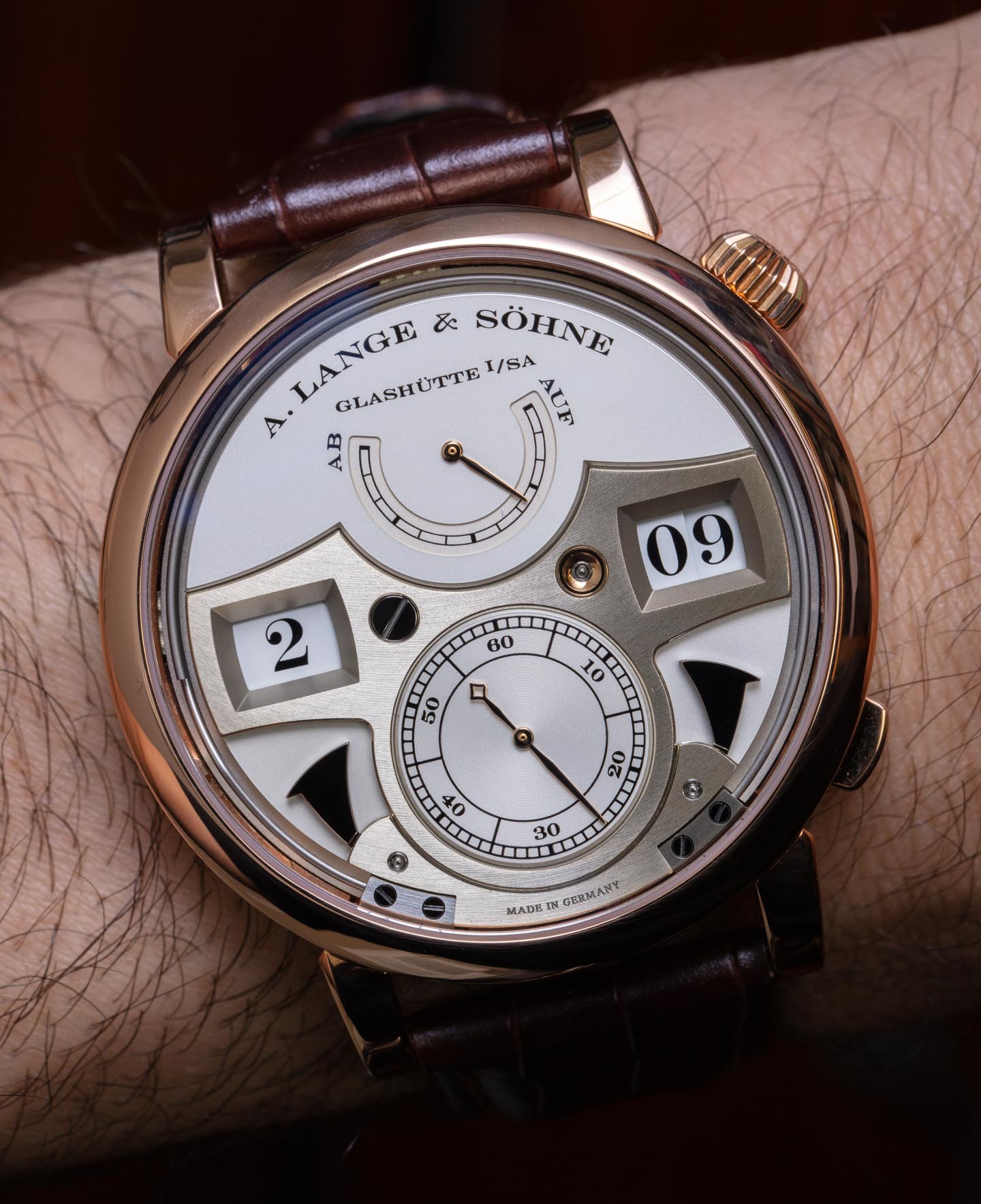 Easily the quirkiest and most entertaining-to-describe watch collection produced by German A. Lange & Söhne is the Zeitwerk. Originally debuted about a decade ago, the Zeitwerk collection is typified by its digital hour and digital minute display for the time, along with a traditional analog subsidiary seconds dial and power reserve indicator. The overall design of the watch is inspired by an historic “digital clock” in Dresden’s opera house that was developed in collaboration with the founder of the brand in the 19th century. A. Lange & Söhne watchmakers and movement engineers have clearly had a fun time with the Zeitwerk, which is now its own family of watches within the Saxon brand. What I think no one originally expected was for this more “modern-looking” collection from the otherwise highly traditional brand to be an area in which A. Lange & Söhne experiments with musical (chiming) watches.

Today, I take an in-depth look at the A. Lange & Sohne Zeitwerk Striking Time (originally debuted on aBlogtoWatch here) — which is a $100,000-plus timepiece that melodically chimes once every 15 minutes, acting as a “quarter-striker” (in the classical parlance). This function can be turned on or off and is a less common chiming function alongside the more common minute repeater. A. Lange & Sohne does, indeed, make minute repeater versions of the Zeitwerk — as well as other “strikers” that are a different breed (such as the Zeitwerk Decimal Strike). The complexity in explaining these watches overall and nuances that make these various models distinct from one another puts this assortment of watches into a basket that I will refer as being for “seasoned collectors and timepiece experts only.” 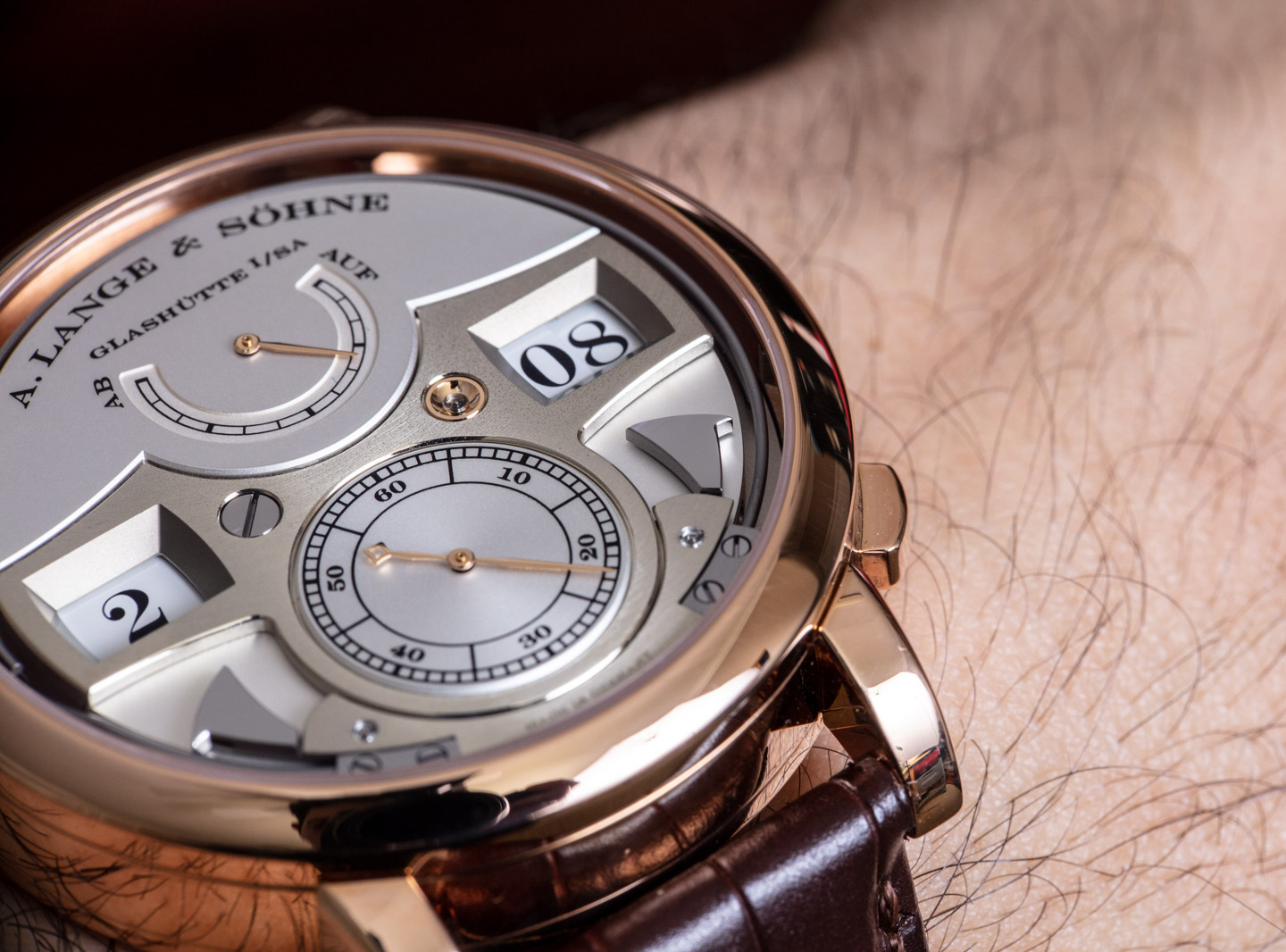 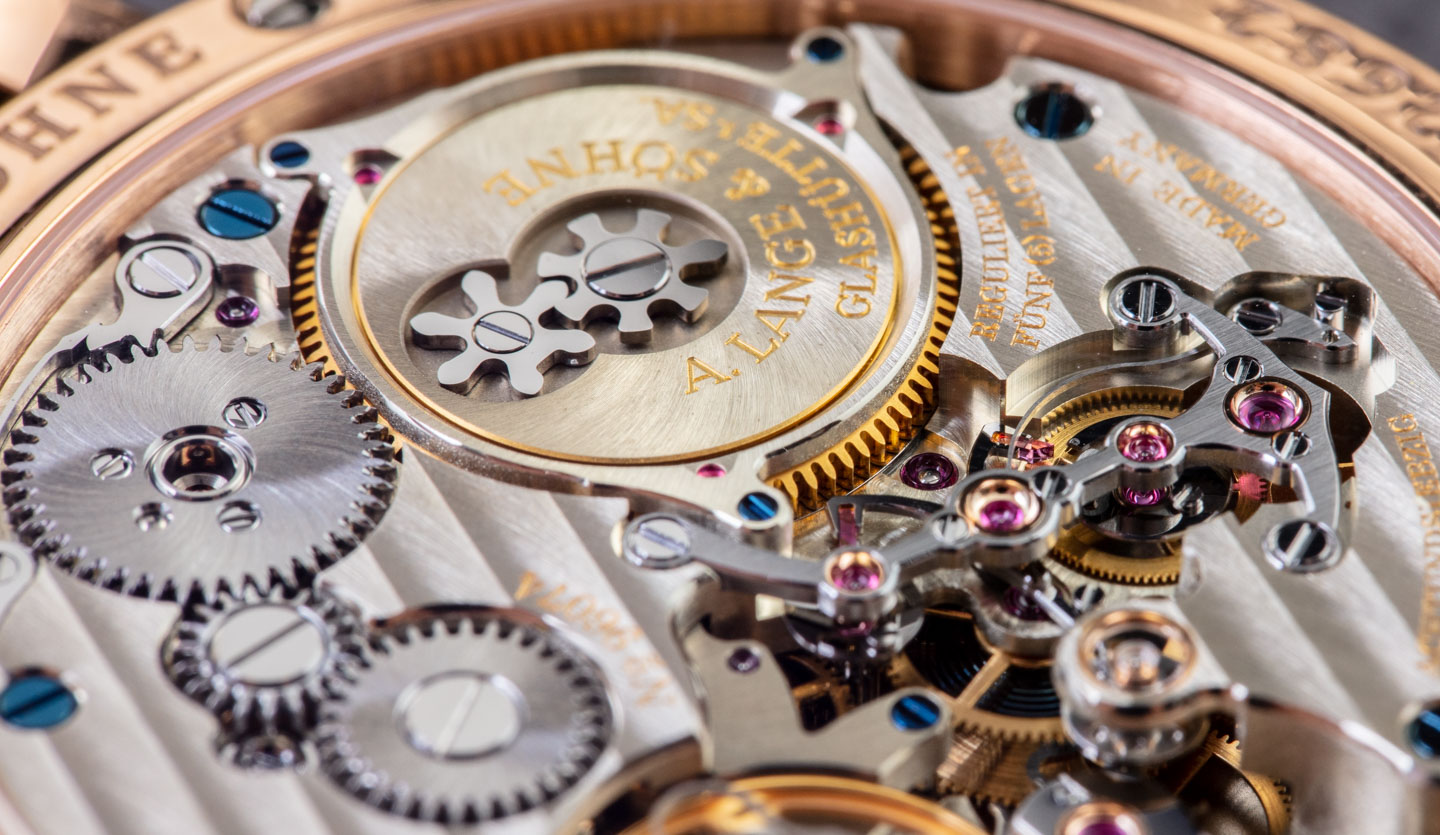 Let’s reflect on this concept for a moment. There is a tendency for well-funded novice watch collectors to go online, reference a handful of “top 10 lists” and reviews about the “best watches,” and then proceed to make a purchase not ultimately understanding or appreciating what they are buying. This is sometimes unfortunate because the road to understanding many fine timepieces is not one of merely earning enough money, but rather of being educated enough to appreciate the art form and engineering behind it. In other words, no one really understands what makes the Zeitwerk Strikng Time a fascinating machine or complex timepiece unless they have spent years being exposed to the topic of horology.

That said, put a Zeitwerk Striking Time watch into the hands of a novice watch enthusiast and they will no doubt be impressed. The weighty solid gold case, handsome dial, and gorgeous hand-decorated and -assembled movement are thrilling for anyone to experience. To understand how an A. Lange & Söhne movement feels different compared to lesser ones, to fathom the interesting complexity of the movement (such as the constant force mechanism), and to appreciate the many hours of decoration and craft that go into each watch is a level of culture that cannot be purchased — but only earned. 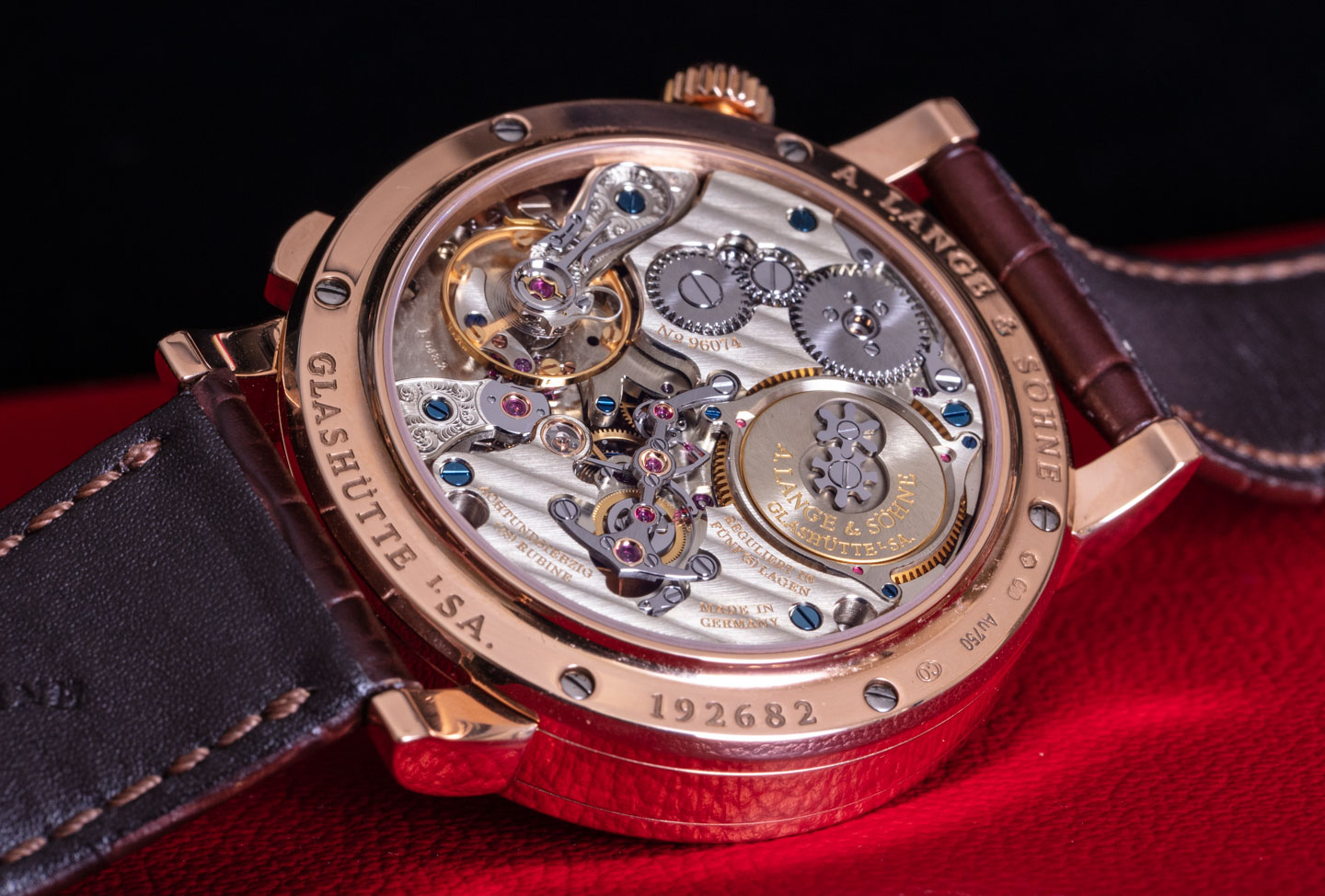 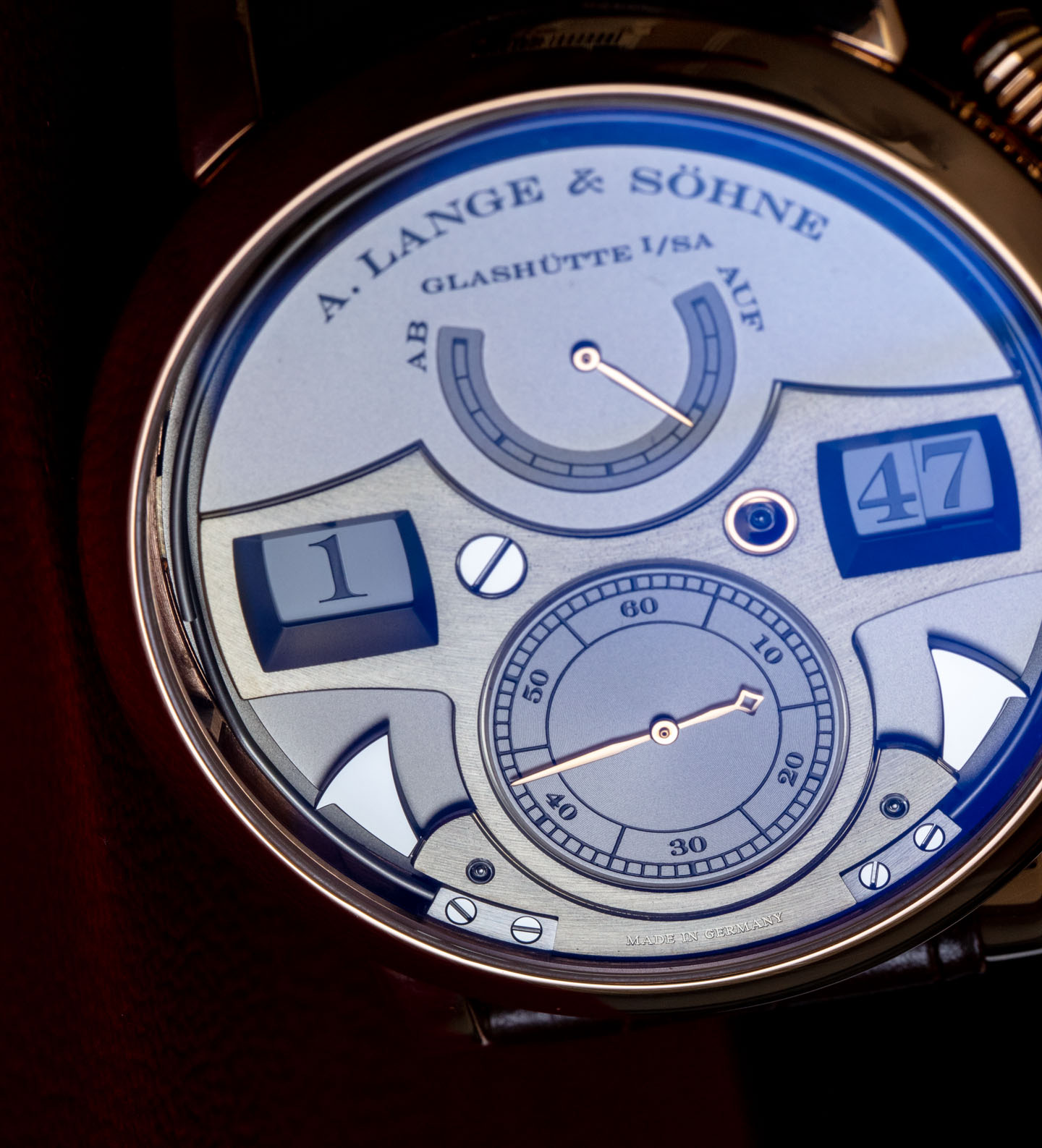 So, here is my summary of the Zeitwerk Striking. It is not only designed and intended by A. Lange & Söhne almost exclusively for watch lovers who have experienced so many other fine timepieces before it, but it also inscribes that forming the desire to actually get one can be seen as a true measure of one’s status as an educated watch collector.

That isn’t to say all seasoned watch collectors will ultimately form a desire for a watch like this. While appreciating the craft that goes into designing and producing a watch of this nature is something pretty much anyone can do, it has a niche appeal that gives the Lange Zeitwerk Striking Time a very special flavor. I really enjoy wearing this watch, yet I can’t articulate one reason why anyone actually needs it. At its best, this and any other Zeitwerk is a discreet pleasure to enjoyed privately by the wearer as they go about their day. 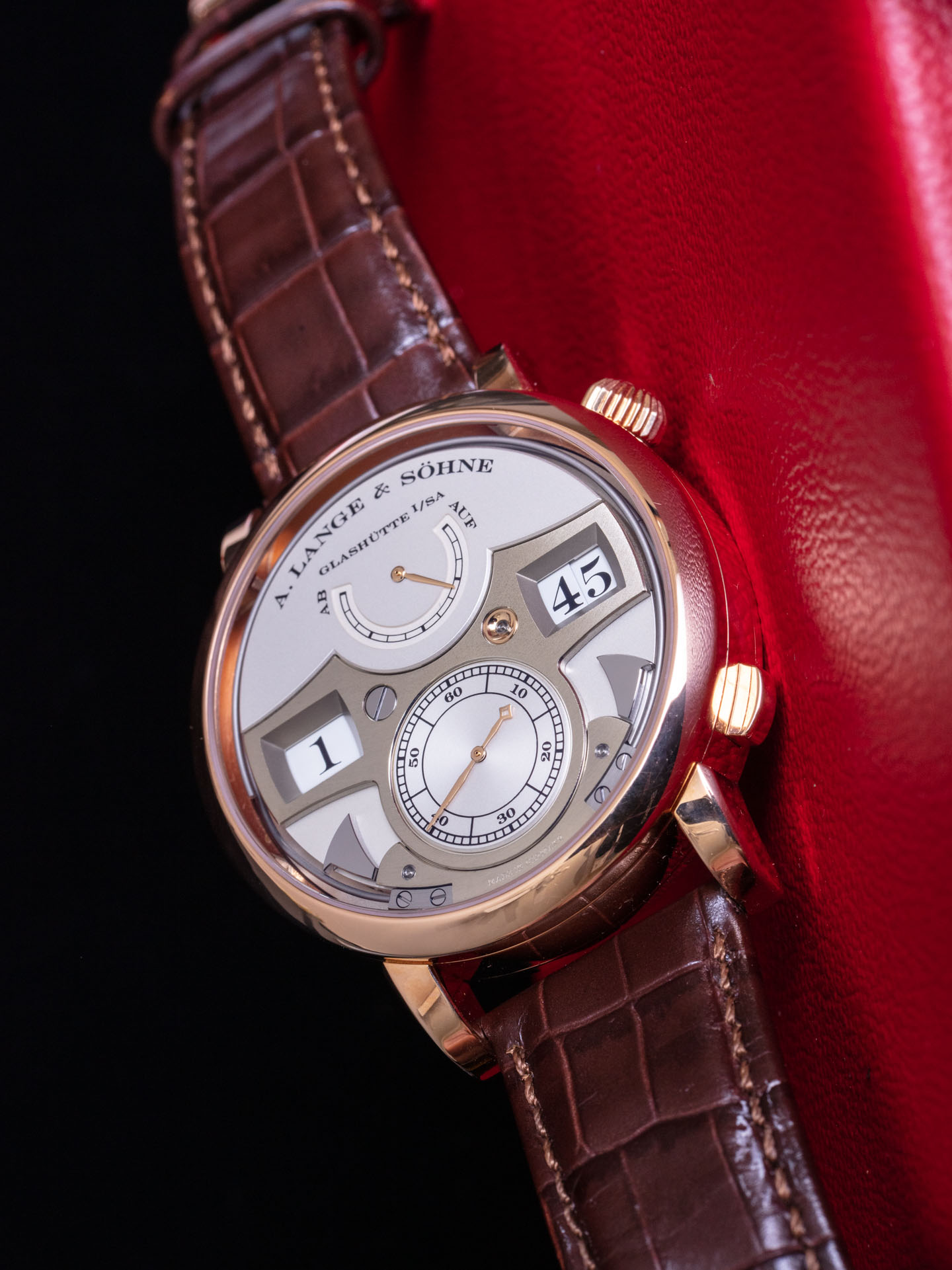 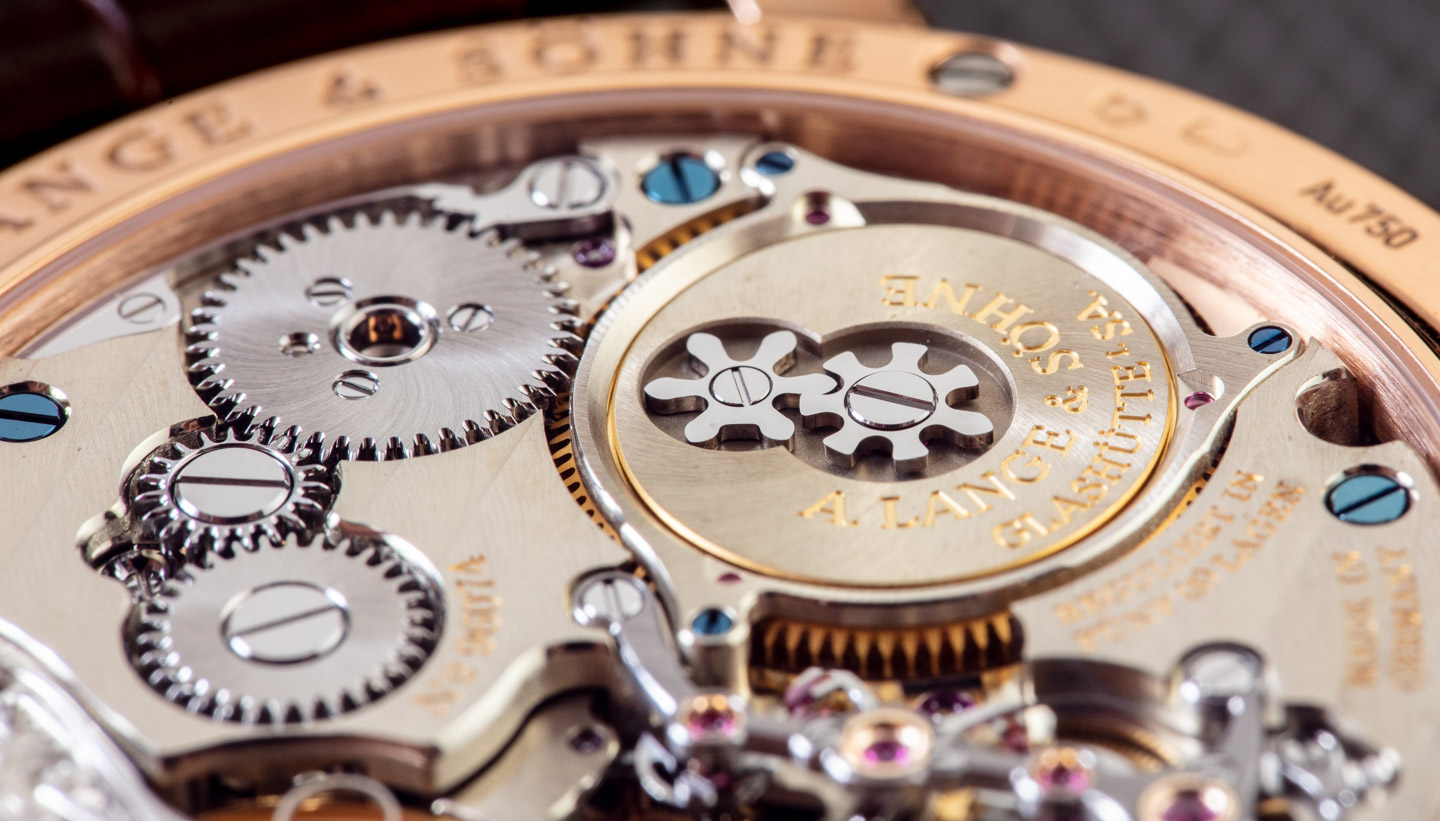 To form love and not just respect for the Zeitwerk Striking, one must be the type of person who has the utmost interest in the smallest details. A perfect example is the deep, sumptuous sound of the small hand-polished hammer as it strikes upon the hand-tuned circular gong — visible through the front of the dial. The sound — like a small bell — resonates and charms the ear despite being just one chime coming from a wristwatch mechanism. If this sound were less appealing, this watch would not be nearly as compelling.

Let me continue on the topic of sound for a moment. I truly wish to emphasize how important this is to the appeal of this timepiece. The striking hammer against the gongs produces an impressively loud sound with a slightly different (deeper) chime at the top of the hour and a slightly higher-pitched sound at each 15 minute interval. The quality of the sound is key since there are few practical reasons why anyone these days would need to be aware of such information. That said, once you have this little mechanical companion “sounding the bell” each quarter-hour, you can easily become lonely without it. 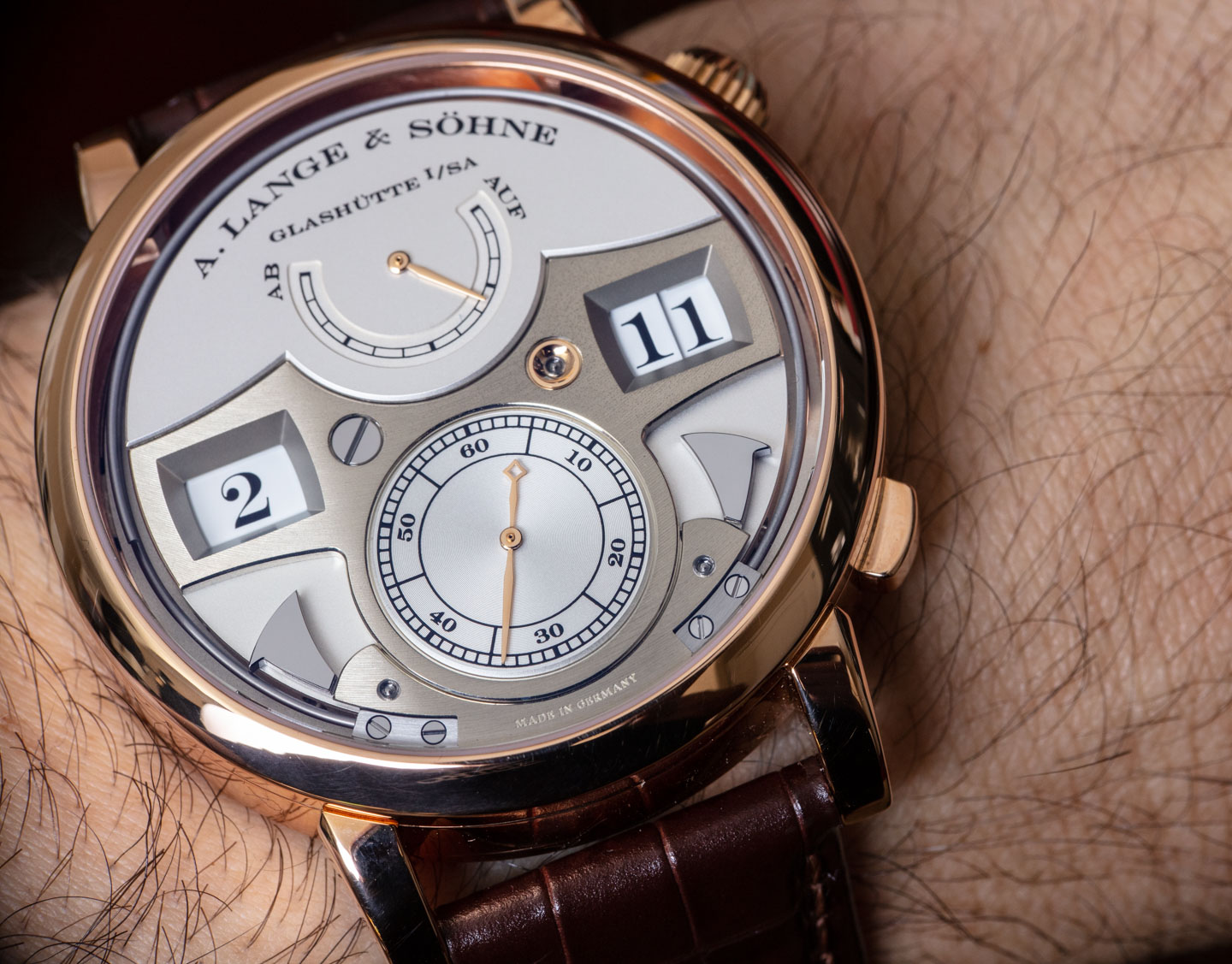 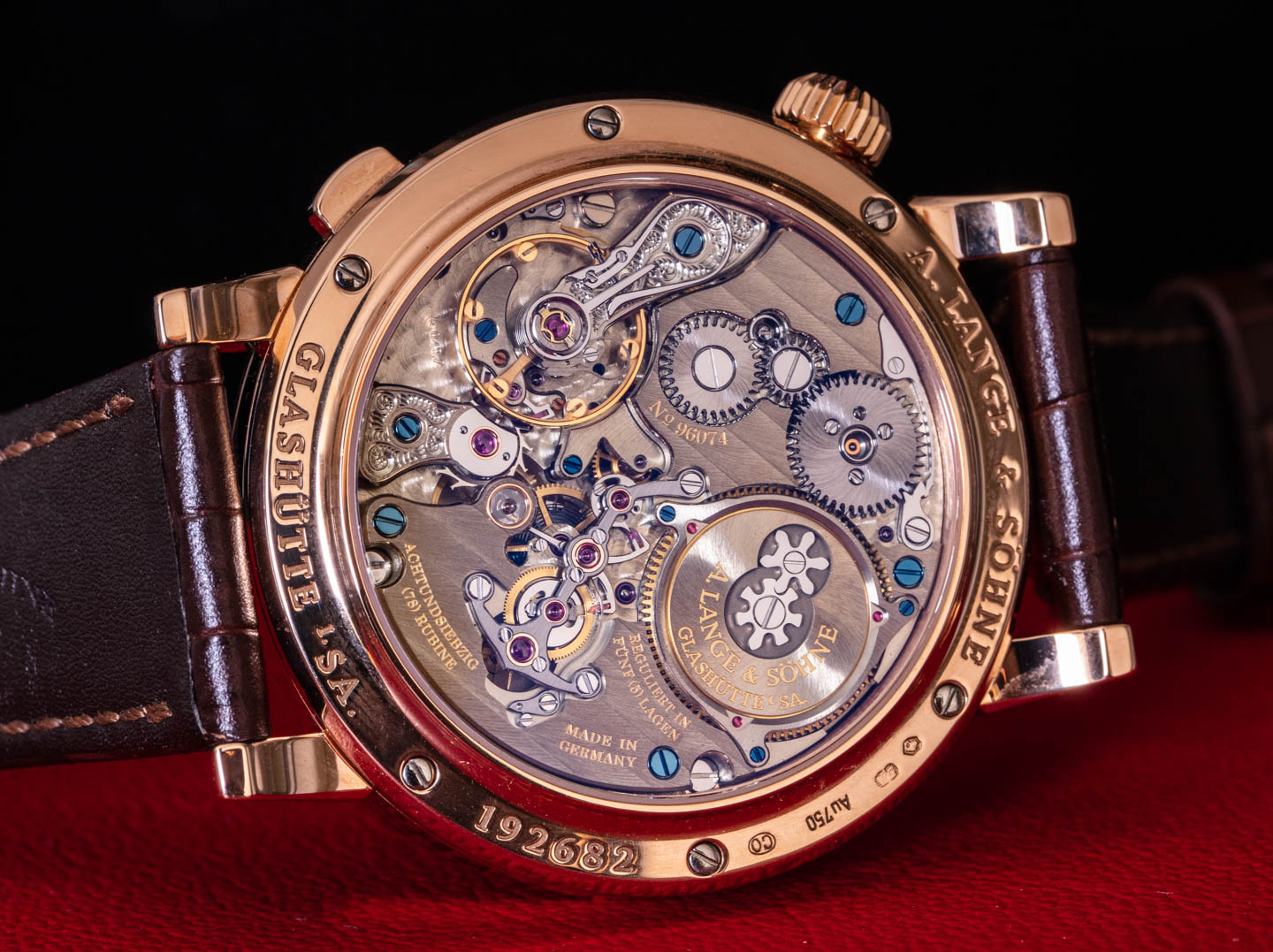 Another fantastic sound that emits from the case happens each time the time changes. Among the most complicated features the Zeitwerk is able to accomplish is using power stored from the movement to move the relatively heavy discs that tell the time. The watch has three large sets of discs. The sound the watch makes as the overlapping minute discs slide over one another is actually quite pleasant. It is a soft, sliding sound, and at least when I hear it, the sound makes me very definitely smile.

Speaking of power consumption, the in-house-made A. Lange & Söhne caliber L043.2 manually wound mechanical engine is trying to accomplish at lot at the same time. In more recent years, subsequent Zeitwerk watches have been able to crank out a bit more power reserve, but in general, the Zeitwerk is a really power-hungry watch. Event operating at 18,000 bph, the L043.2 has but 36 hours of power reserve. Having a power reserve indicator on the dial is an important help, but you will need to wind the watch daily. What I love about winding the watch is how solid it feels. Even though this and other A. Lange & Sohne movements are small enough to sit on your wrist, they have a “heavy, solid” feeling to them that can make other timepiece movements feel flimsy by comparison. 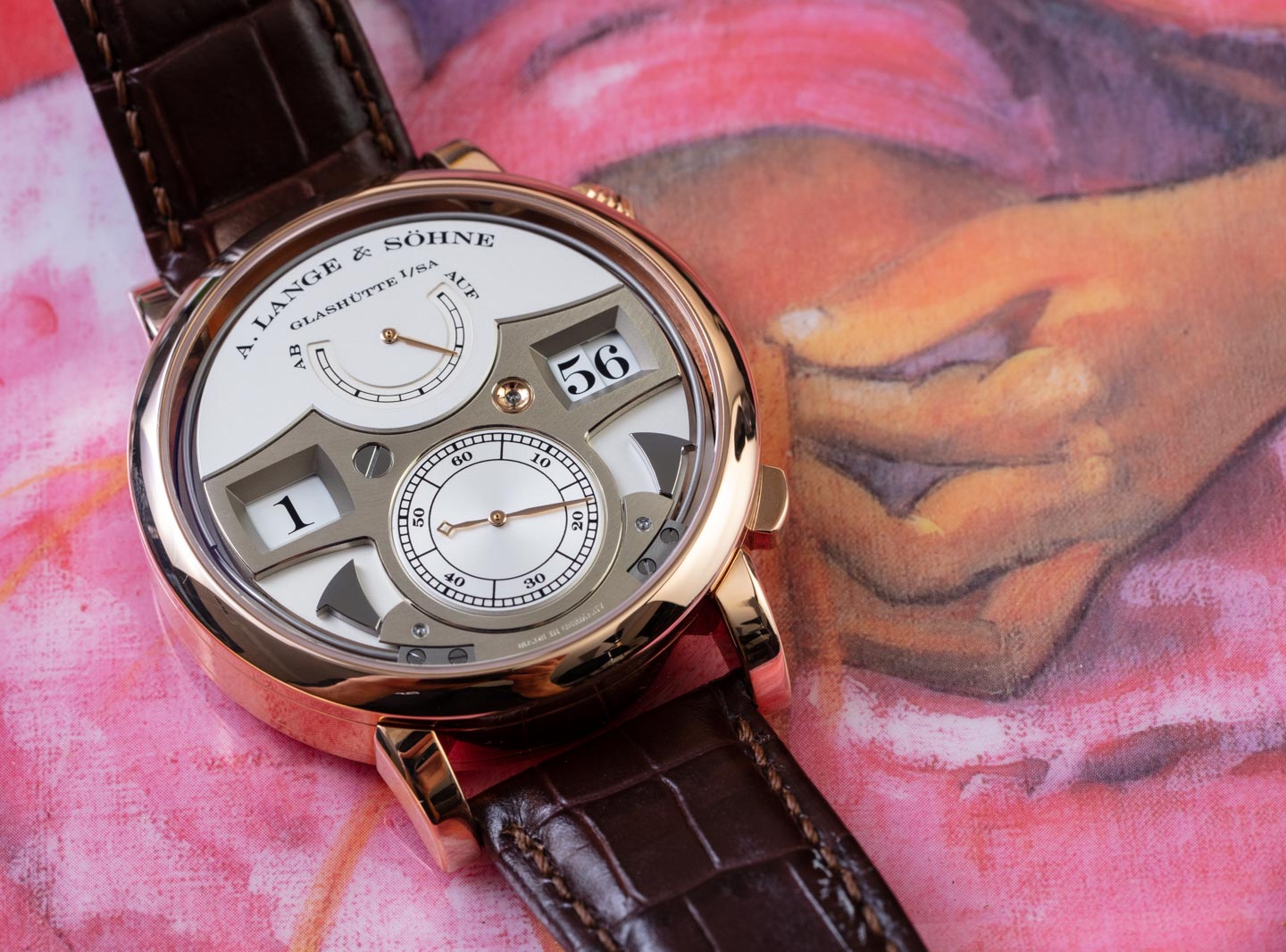 Produced from 528 parts, the L043.2 movement is visually stunning to behold. Like other A. Lange & Sohne movements, the mechanism is not only entirely decorated by hand, but once the movement is initially assembled, it is taken apart, inspected, and then re-assembled. I mentioned above how the mechanism includes a constant force escapement system. What this does is ensure a much more consistent volume of power to the gear train, which operates the time telling system, from the mainspring barrel that powers the watch. Visually observable through the rear of the case is the constant force mechanism in action as it builds up power that it then delivers in consistent pulses to the gear train. The movement is produced from German Silver (which forms an attractive patina over time) and uses plenty of high-end features, such as gold chatons and flame-blued screws.

The two digital dials for the time on the dial are balanced by the analog dials for the power reserve and subsidiary seconds. This particular dial on the 18k pink gold version of the Zeitwerk Striking Time is also produced from German Silver and actual silver — which is actually uncommon for the brand. A. Lange & Söhne also produces a version of the Zeitwerk Striking Time in 18k white gold with a black dial. The case is 44.2mm-wide and 13.1mm-thick. This is still very wearable, but on the larger side for an A. Lange & Sohne product. Attached to the case is a brown alligator strap. 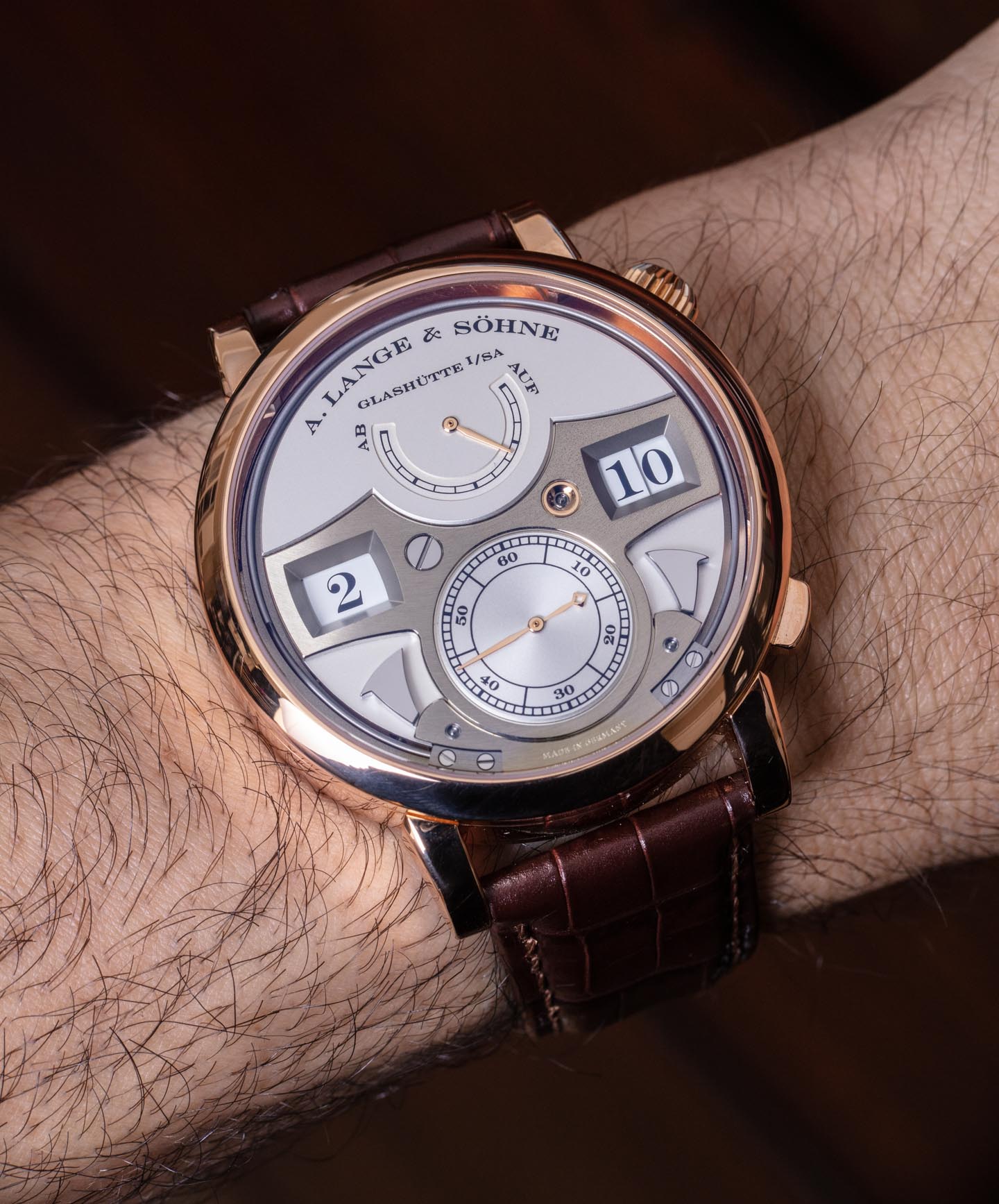 That A. Lange & Sohne continues to be a brand focused solidly on enthusiasts and not the mainstream is a fact collectors like. It is also based on a core value of the brand’s team: “Build something great and the right people will discover it.” That works to a degree for brands trying to grow, and much better for brands with a solid reputation around the world, as long as there are talkative watch enthusiasts like me willing to spread the gospel of good watches. A. Lange & Söhne will continue to stroll around quietly… while carrying a big stick. Price for the reference 145.032 A. Lange & Sohne Zeitwerk Striking Time watch is €112,000. Learn more at the A. Lange & Sohne website here.

Necessary Data
>Brand: A. Lange & Sohne
>Model: Pilot’s Watch Chronograph TOP GUN reference IW389101
>Price: €112,000
>Size: 44.2mm-wide and 13.1mm-thick.
>When reviewer would personally wear it: As an emotionally gratifying daily-wear (though it isn’t a sports watch) that reminds me of why I love well-made mechanical watches and why they give me so much to ponder and enjoy.
>Friend we’d recommend it to first: Luxury watch fan beguiled by interesting and beautiful mechanical movements who wants a timepiece that allows for a more visceral (versus merely intellectual) appreciation of the watchmaking craft.
>Best characteristic of watch: Exceptionally well-made and thought-out, even if it doesn’t always make sense who the watch is intended for or what purpose it serves. A. Lange & Söhne sought out to make the best possible combination of quarter-striker and digital hour/minute complications — and it did.
>Worst characteristic of watch: As a collector’s watch, the Zeitwerk Striking Time does not address any particular utilitarian and functional needs, so its appeal is entirely emotional. A. Lange & Söhne has produced an arguably confusing array of chiming watches within the Zeitwerk family, so it takes an expert to truly wrap one’s mind around this collection within the already challenging-to-penetrate brand. So, in other words, it’s for expert watch nerds only.