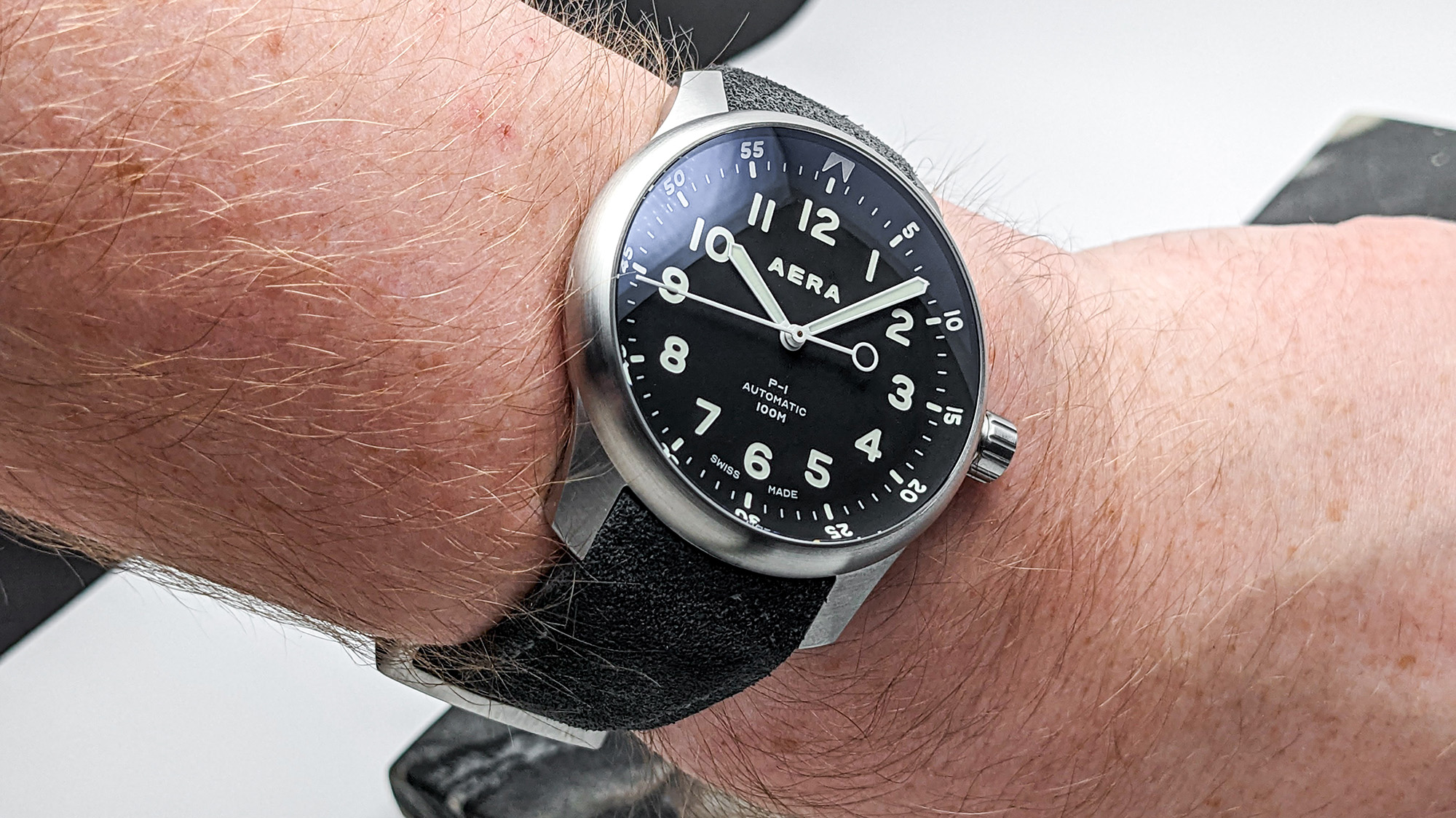 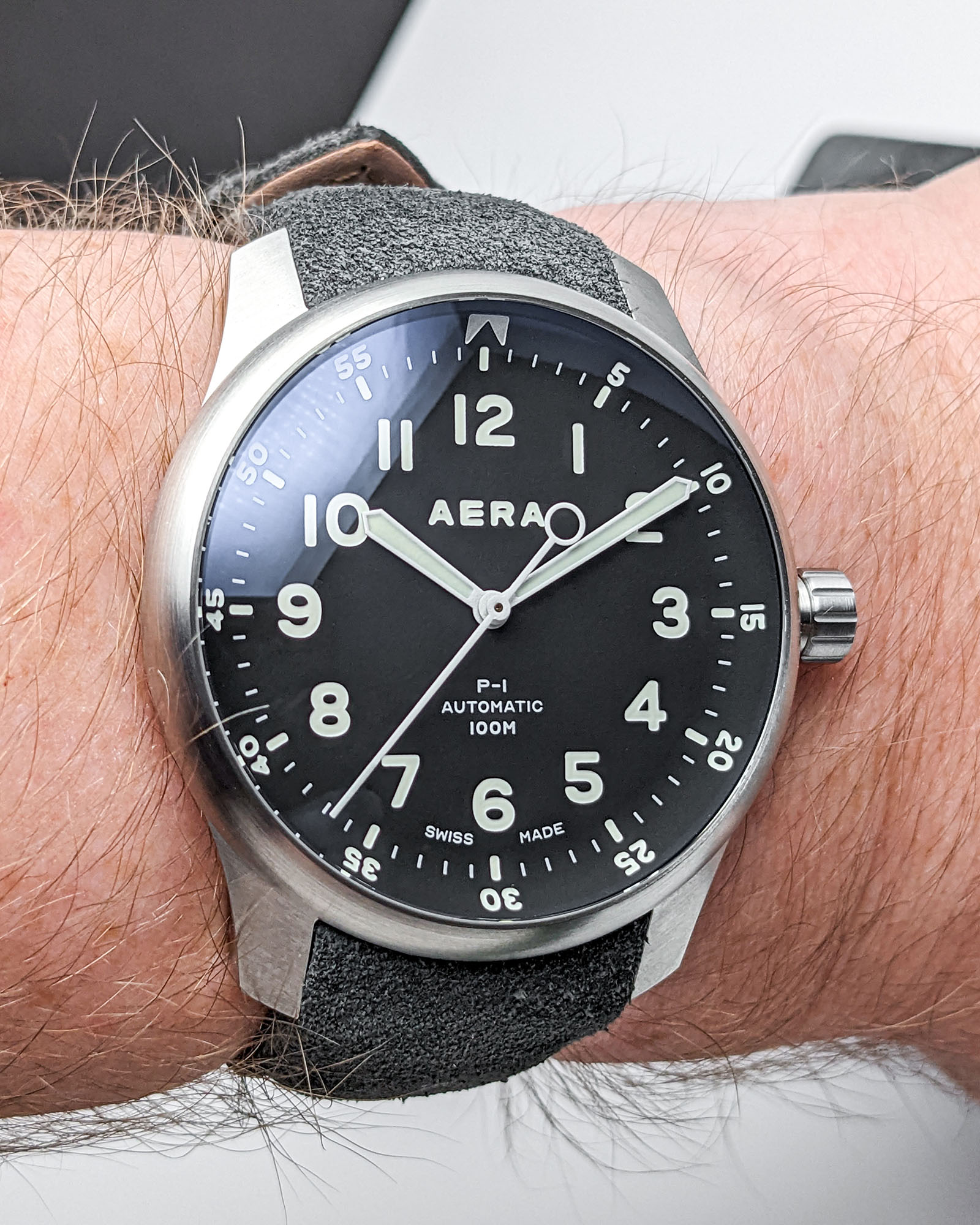 Of all the major sports watch categories (divers, field watches, sports chronographs, and the like), pilot’s watches are possibly the most difficult to consistently define. In many ways, it’s a “you know it when you see it” genre, encompassing designs that run the gamut from the baroque to the starkly minimal. Arguably, the only real criteria for a pilot’s watch are a large dial with easy legibility and a running seconds hand, and with such a broad potential scope it can be difficult to create something truly new in the pilot’s watch genre. Young British brand Aera has made a concerted effort to create a new pilot look with its latest release, however, combining classic pilot cues with a newfound sense of Marc Newson-esque visual softness and minimalism. The new Aera P-1 Pilot delivers a unique take on the core pilot watch design, blending solid utility, nuanced finishing, and a uniquely rounded visual style to create something with a far more welcoming character than the average military equipment-inspired pilot’s watch. 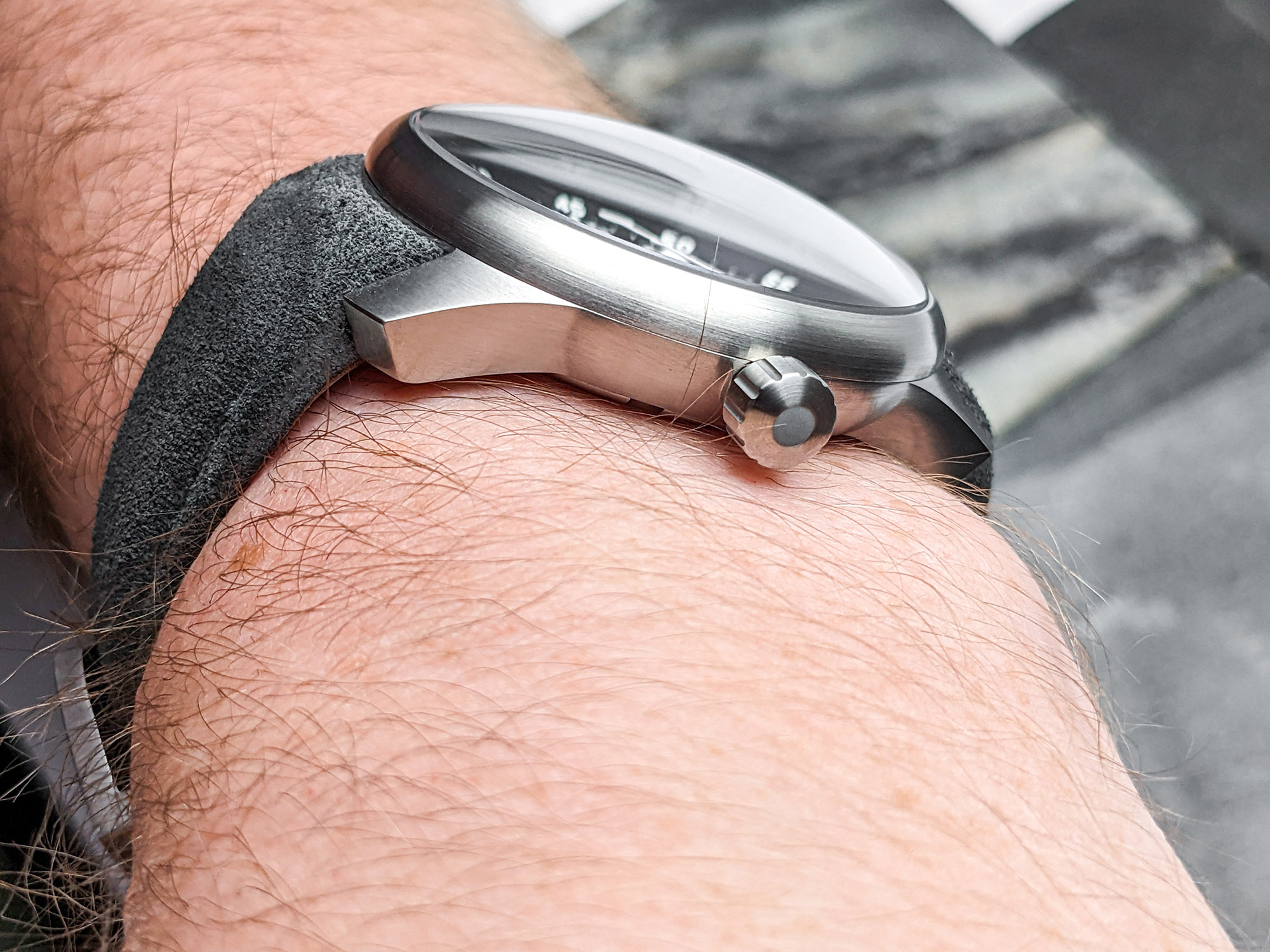 The Aera P-1 Pilot’s stylized design begins with its 43mm-wide 904L stainless steel case. At first glance from above, this shape is deceptively simple, reading as a slightly rounded take on the traditional pilot’s watch case design. When viewed in profile, however, the P-1 Pilot’s hidden nuances begin to reveal themselves. From the top of the tall domed sapphire crystal all the way to the solid caseback, the P-1 Pilot’s main case body forms a single continuous pebble-like curve, giving the design an organic, modernist look on the wrist. The fully brushed finish works to accentuate the curving surface while keeping things visually simple, and like many other curving case designs, this smooth form wears markedly different from what the figures might suggest. While there’s no hiding the 15mm overall height, the rounded undercut on the case sides makes the P-1 Pilot’s actual contact patch on the wrist rather small. This single element works to make this 43mm-wide case wear closer to 41mm in practice, with impressive comfort thanks to its rounded surfaces. This curving central case also gives the tapering lugs a hidden layer of dimension. Looking beyond the rather standard outline, there’s surprisingly complex surfacing on the lug sides, blending compound curves with an overall downward taper and an undercut that echoes the main case body. Thanks to its gear-toothed screw-down crown, the P-1 Pilot offers a solid 100 meters of water resistance, ensuring that this softer interpretation of pilot watch cues doesn’t lose out on functionality. 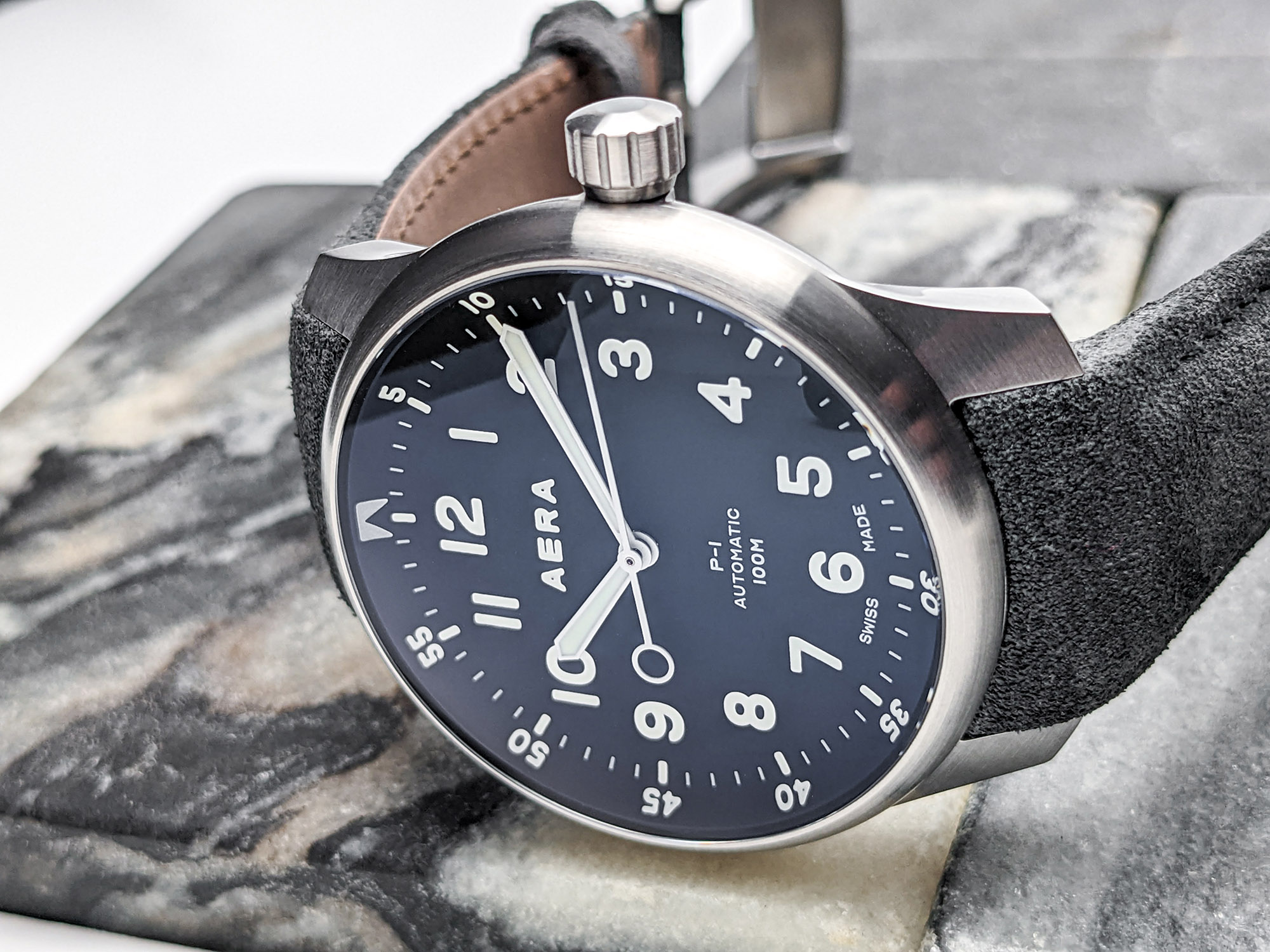 As with the case, the Aera P-1 Pilot’s dial appears rather conventional at first glance, but close inspection reveals a wealth of visual nuance. The most striking element here is the shape of the dial surface itself — rather than using a flat dial paired to a sloping chapter ring or rehaut, the dial surface itself curves upward at the edge to meet the crystal for a smooth, seamless look. Coupled with the dramatically domed crystal, the dial can look either entirely flat or immensely deep depending on the viewing angle, a visual effect that feels more akin to Ressence than anything in Aera’s price range. The dial texture adds its own left-field charm as well, with an ultra-fine matte grain pattern Aera refers to as “velvet black” cut through by shallowly engraved, clean white Arabic numerals with pale gray dial accents. These numerals, along with the rest of the dial hardware, echo the rounded organic look of the case for a softer and friendlier look than the average military pilot’s watch. Likewise, the gently tapering sword handset is far less aggressive than traditional flieger hands or even straight batons would be while remaining extremely legible at a glance. Aera wisely opts to omit a date display for the P-1 Pilot, allowing the overall dial layout to remain clean, symmetrical, and handsomely minimal. 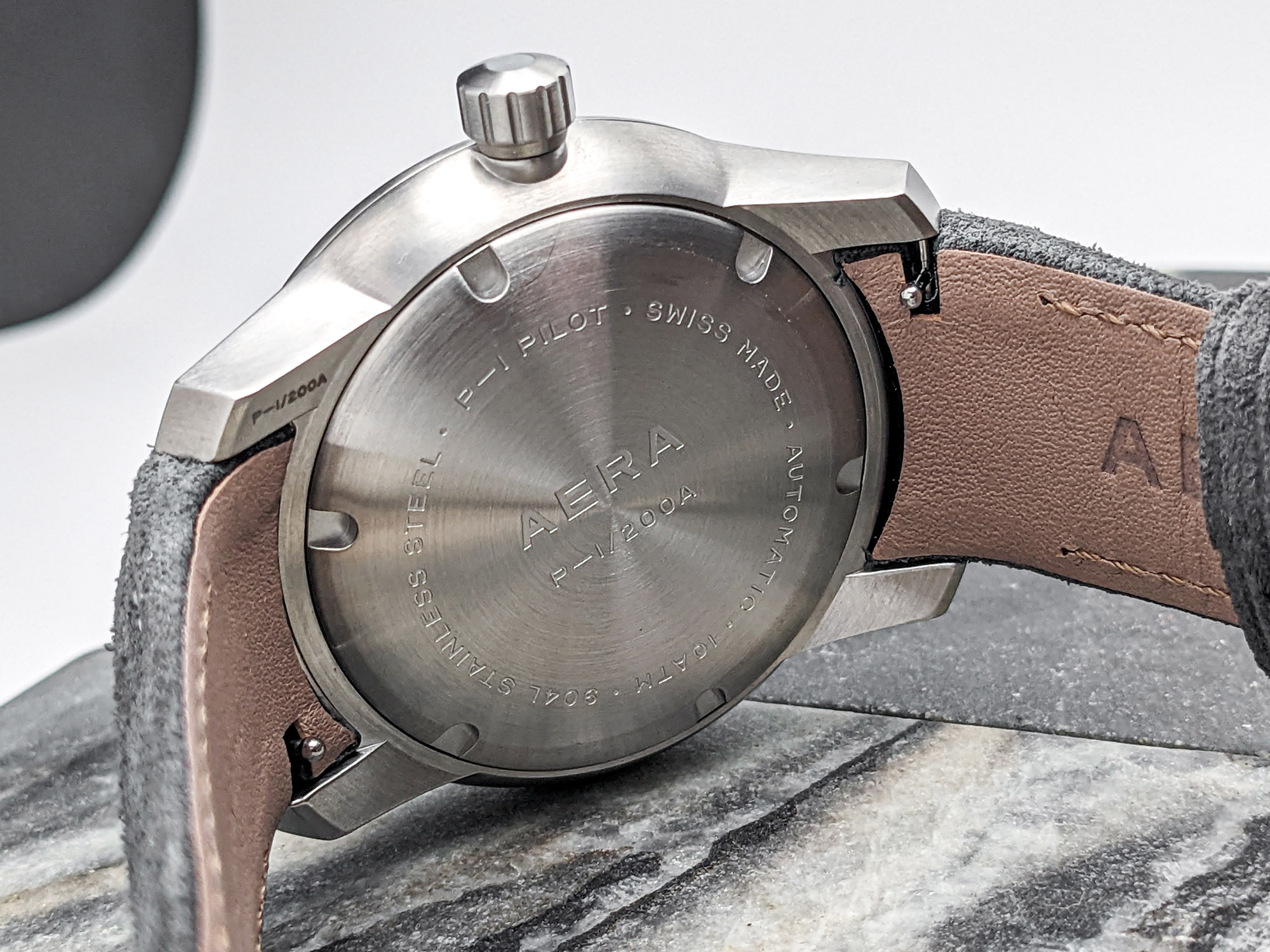 Aera powers the P-1 Pilot with the ubiquitous Sellita SW200-1 automatic movement. Although the SW200-1 is a fair and reliable movement on its own, with a 28,800 bph beat rate and a middling 38-hour power reserve, this familiar powerplant creates a few problems in this application. The first of these is the price. At the P-1 Pilot’s price point, many brands opt for more capable or in-house created movements, and while this certainly isn’t the most expensive SW200-1 powered watch it does bear mentioning. The other issue is the phantom date position for the crown. While the P-1 Pilot does not feature a date display, the crown does have a position for adjusting the nonexistent date window – an issue many brands at this price point resolve. With that said, the particular SW200-1 inside our Aera P-1 Pilot sample was a respectable performer, averaging -6 seconds per day through our testing period. 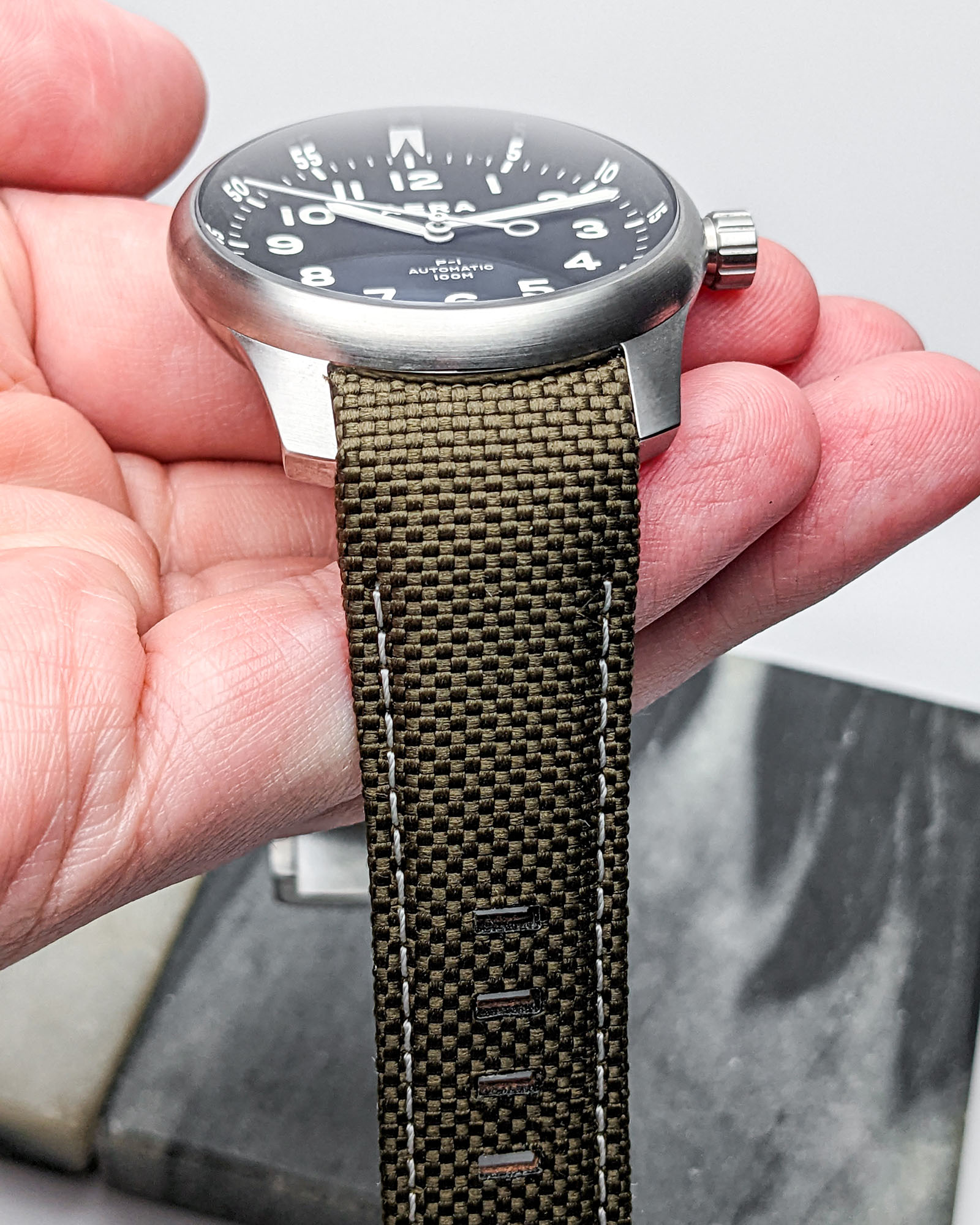 The Aera P-1 Pilot comes equipped with a wide variety of curved-end straps, including a classic black leather strap, a deep gray suede option, and a third strap of the buyer’s choice from the brand’s broad selection of options. Each strap in the collection is equipped with quick-release spring bars for easy changing, and as one might expect from such a simple layout, the P-1 Pilot works well with nearly any strap pairing. I spent most of the review period changing between the moody “Smoke Gray” Italian suede strap and a Cordura fabric strap in rugged olive green. Each strap in the series follows the same construction, with ample padding to flow seamlessly into the lugs and a pronounced downward curve to effectively hug the wrist. While these straps may be a touch on the stiff side out of the box, after a relatively quick break-in period these straps and the rounded case work to create an impressively comfortable wearing experience. 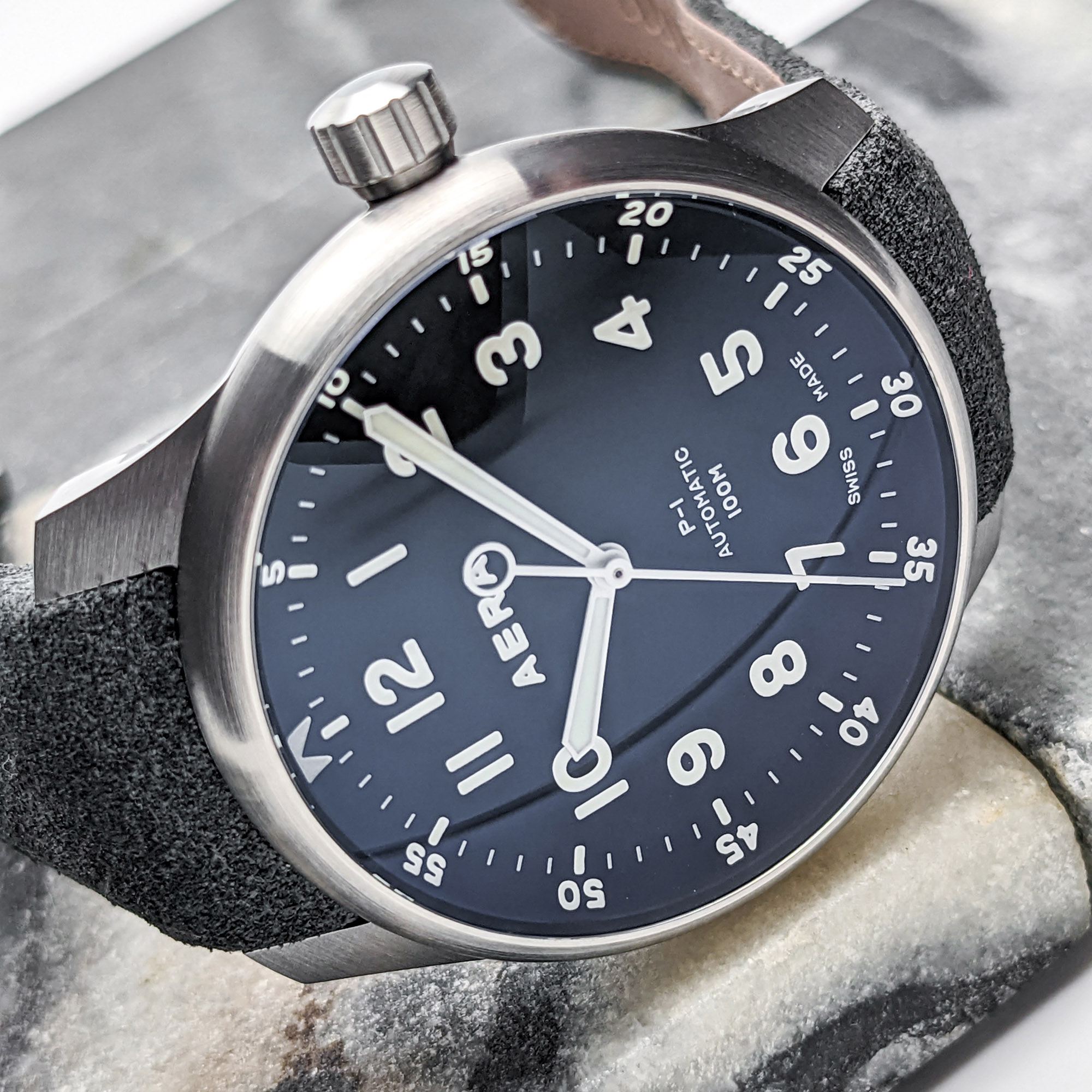 With a versatile, deceptively simple look that delivers both excellent finishing and a wealth of rounded, organic visual nuance, the Aera P-1 Pilot is a compelling offering from the young brand that pushes the boundaries of pilot’s watch design. While still in relatively early stages, it’s easy to imagine Aera’s design language adapting to a broad spectrum of categories with attractive results. The Aera P-1 Pilot is available now through the brand’s e-commerce platform, with an MSRP of $1,300 USD as of press time. For more details, please visit the brand’s website.