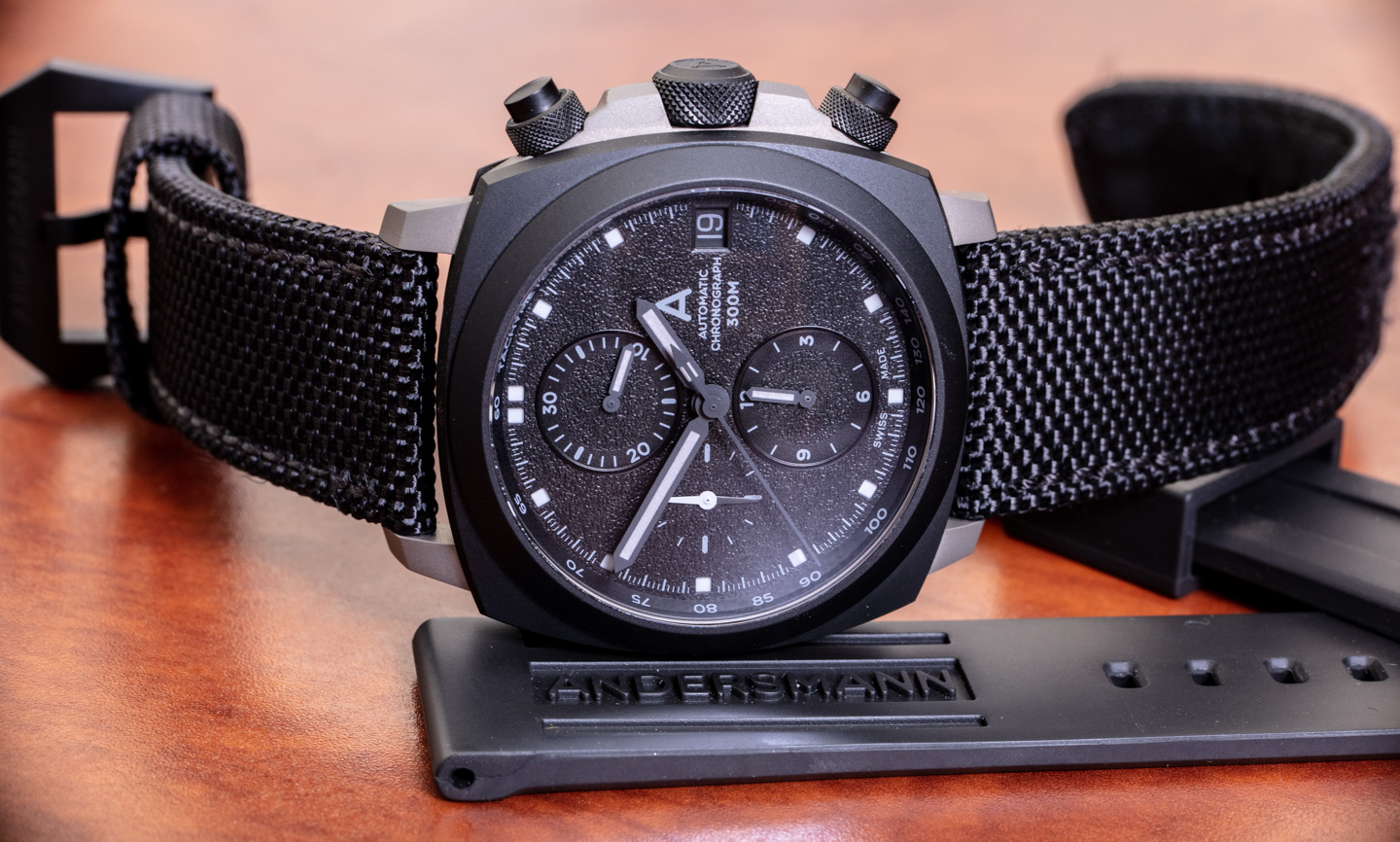 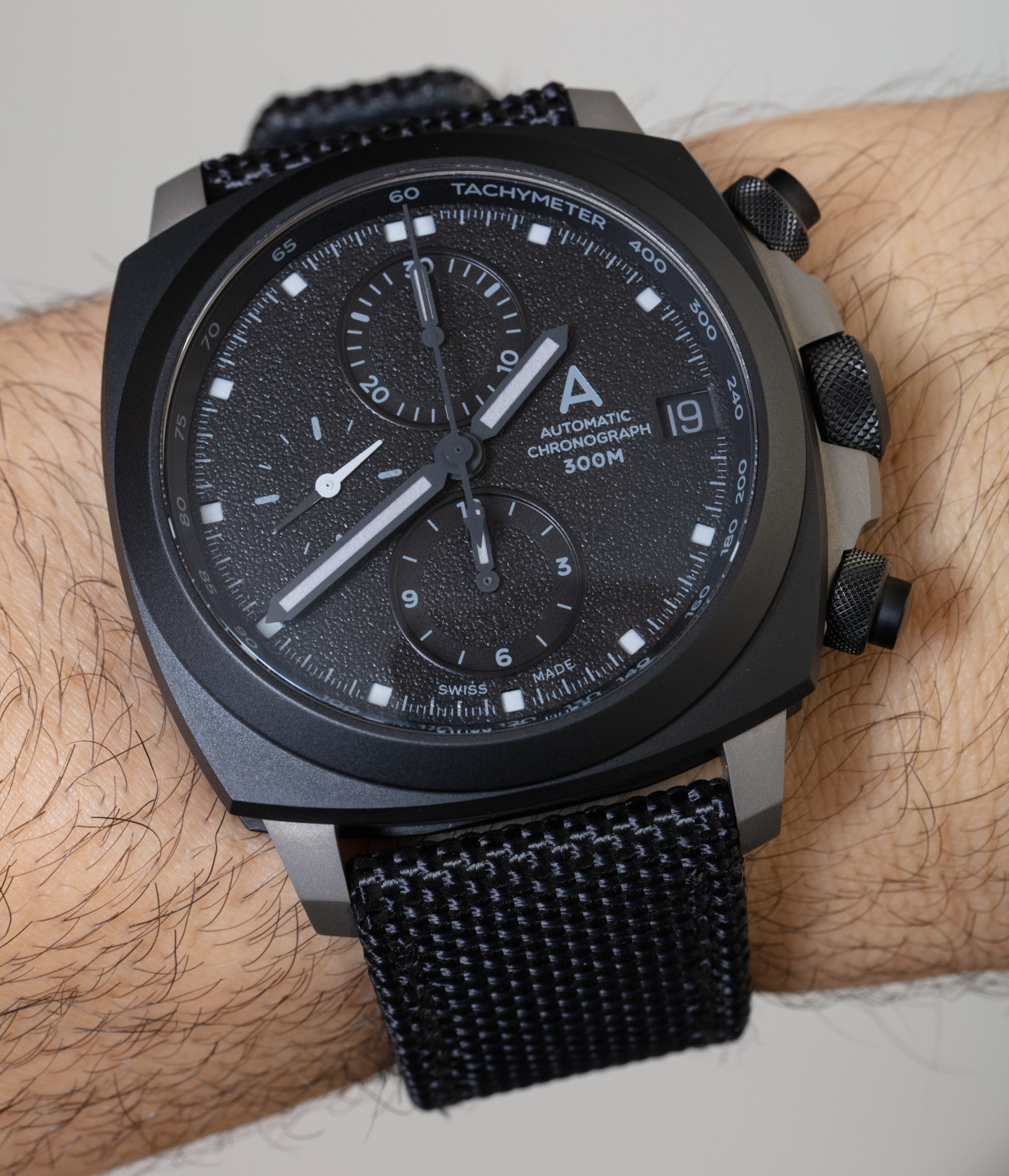 The Chronograph DLC is, indeed, still a diver’s watch (at least as far as durability is concerned), with 300 meters of water resistance. The Andersmann Chrono also comes in a lot of styles — mostly varying dial accent colors and whether parts of the case are DLC coated black, or not. The case is also titanium, which makes the Chronograph DLC remarkably lightweight. It also happens to include a cool and oddly still-rare Swiss Made movement produced by ETA known as the Valgranges caliber A07.211. More on that below. 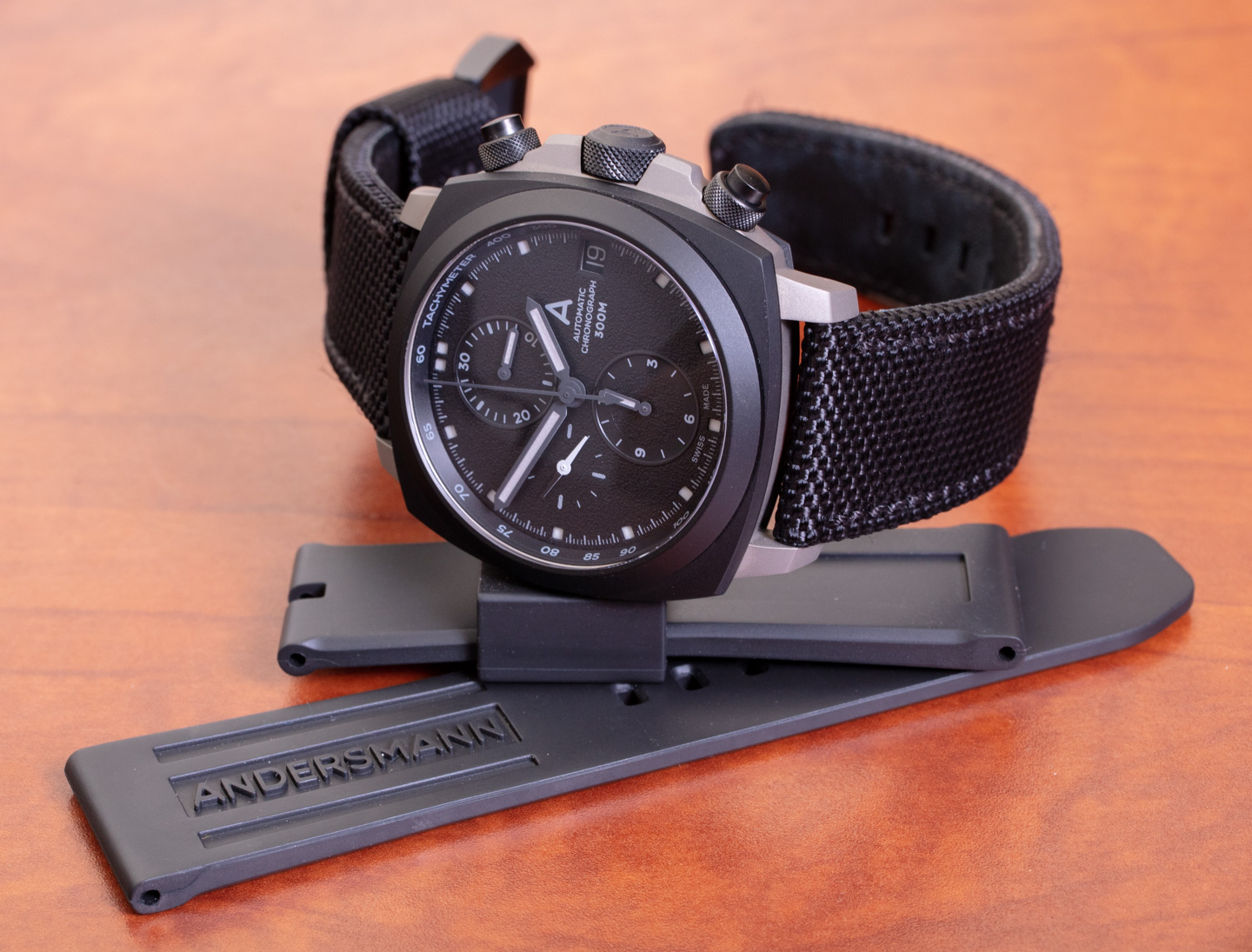 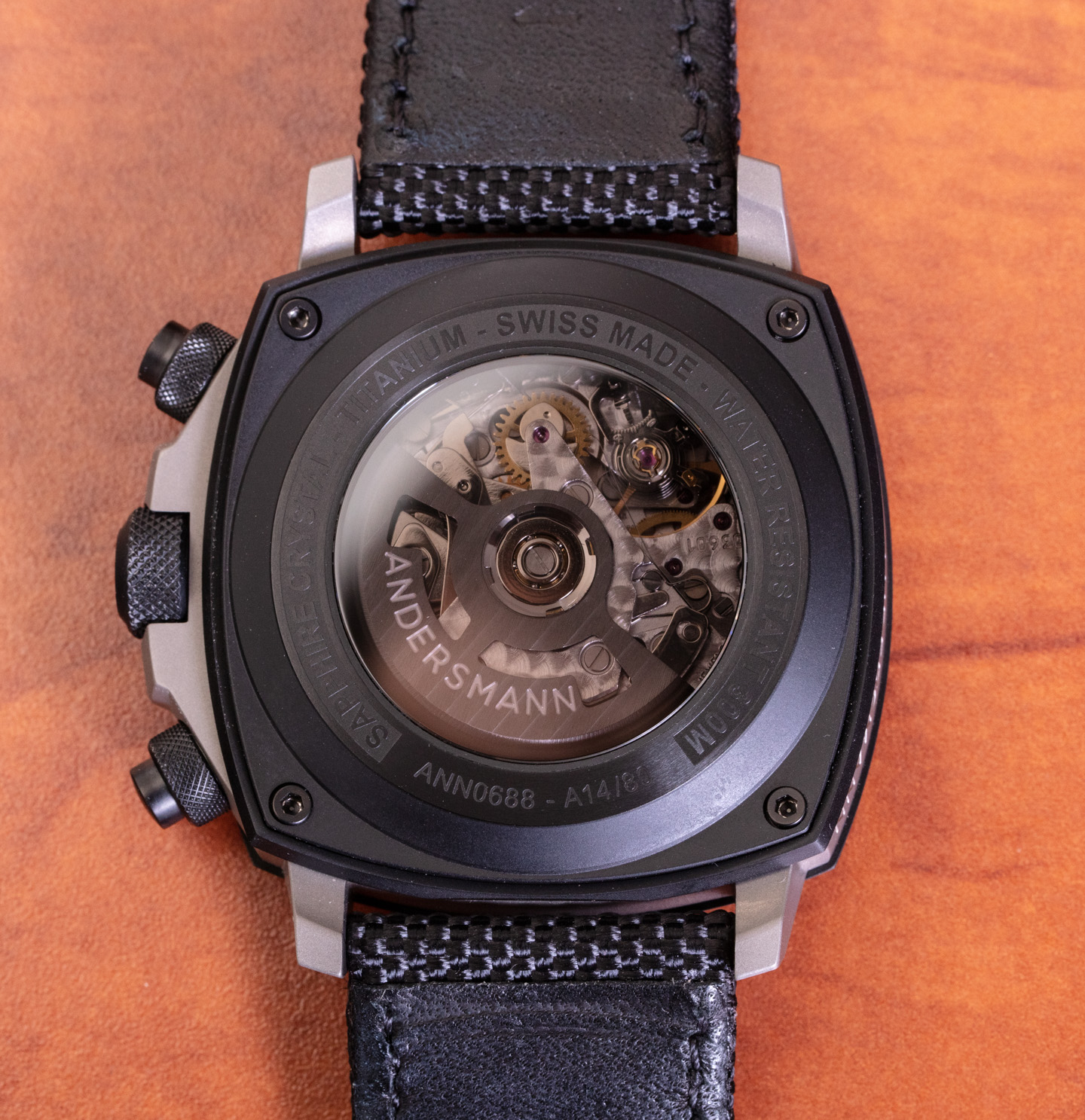 This reference ANN0688 version of the Andersmann Chronograph is among the newer models and supplements some of the existing Chronograph collection with a model that has part of the case DLC-coated. DLC stands for “diamond-like carbon,” and the coating is known for its high level of scratch resistance — more so than natural titanium, for sure. This is also the most military-mean-looking of the Chronograph watches, with a monochromatic look in various shades of gray. The picture of the Chronograph DLC ANN0688 on the Andersmann website might lead you to believe that the luminant color on the hands and hour markers is white, but it is actually a sort of cement-colored gray that seems to match the pale gray of the sandblasted grade 2 natural titanium middle case section.

The dial is very instrumental-looking, in a minimalist sense, which is nice but a bit sober. Over the dial is a domed and AR-coated (I would have liked more AR coating, personally, given the high curvature of the crystal) 3.8mm-thick sapphire crystal, but unfortunately, it attracts a lot of fingerprints, so wiping down the crystal with a cloth regularly will be important. The dial itself has a lot of details from the texture face to the sandwich construction for the hour markers that are windows to a lume-painted layer beneath. 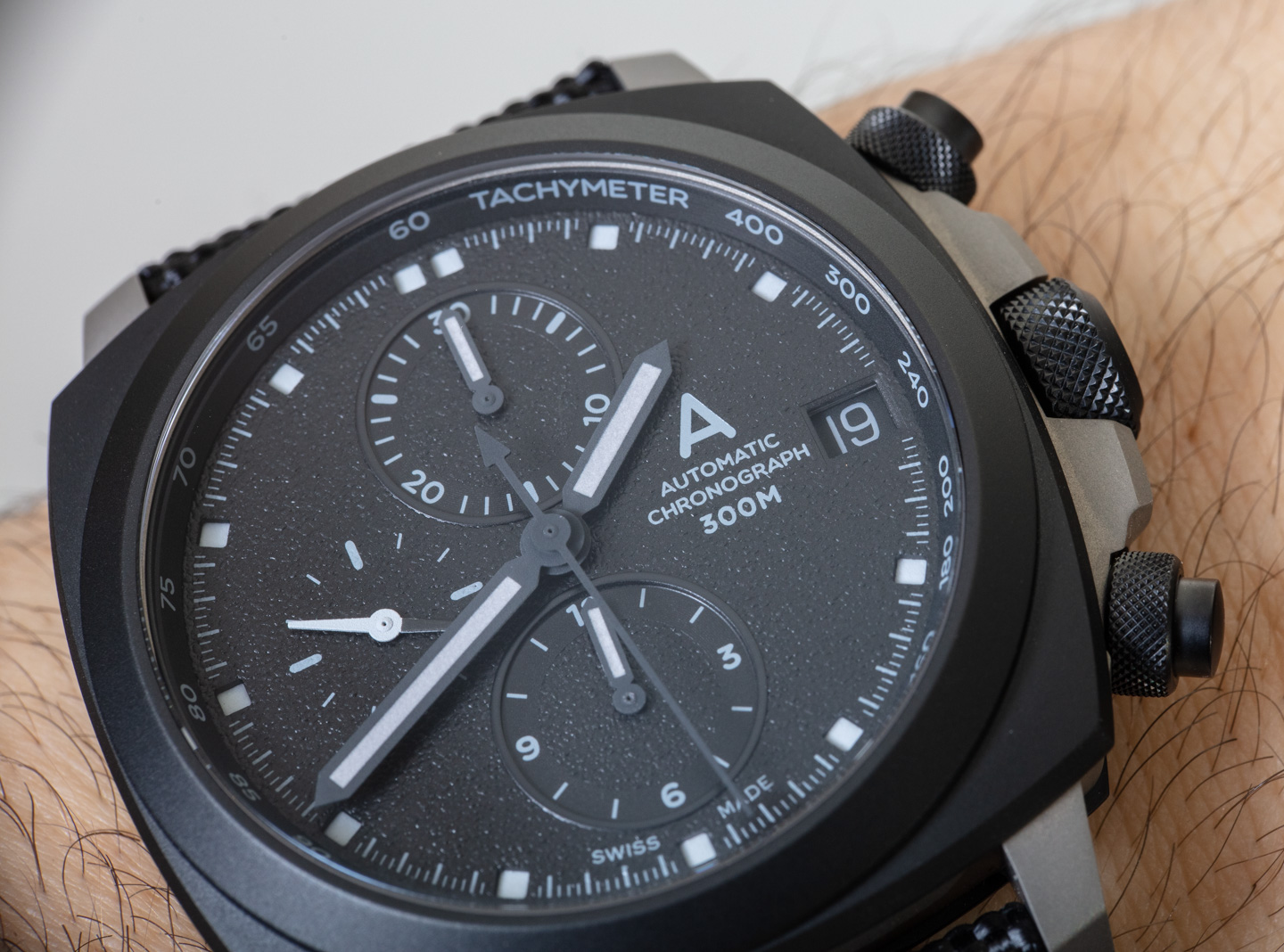 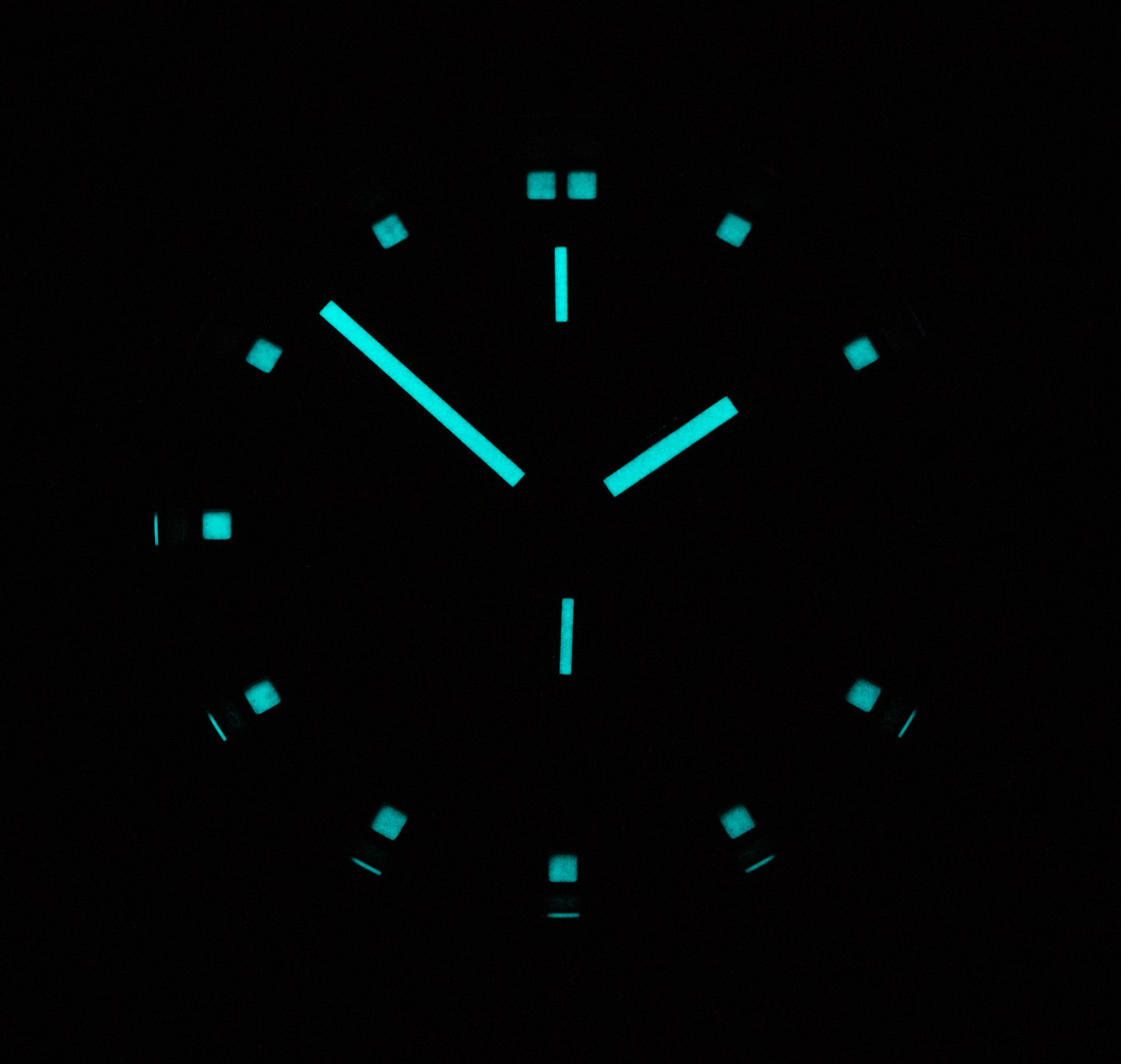 One oddity of the otherwise functional dial is the lack of lume on the chronograph seconds hand, which itself is in a matte dark-gray color that matches the dial. So, reading it is hard as it functions the exact opposite —  sort of like a bright red chronograph seconds hand might on a black dial. That said, most other versions of the Andersmann Chronograph (which have a more colorful dial) have more prominent chronograph seconds hands. Also, I know chronographs and tachymeter scales were secretly wed in a ceremony back decades ago, but I feel like having a diving watch-themed brand doing a chronograph with a motorsports feature is a missed opportunity to do something a bit more related to diving or general-purpose chronograph use. That’s also because the tachymeter scale is attractively printed on a nearly vertical flange ring around the periphery of the dial.

The cushion-shaped case isn’t directly trying to look like a Panerai, and I think it feels distinctive enough from Panerai that no one will accuse Andersmann of doing any homage designs. The slightly curved titanium case is 44mm-wide, 16.5mm-thick, and has a lug-to-lug distance of 51mm. The lugs are 24mm apart, meaning that most straps made for most Panerai watches will fit this watch as well. Andersmann includes two straps with the Chronograph DLC, and they include a high-quality FKM black rubber strap and a leather-lined black canvas-style fabric strap with a single oversized strap loop and matching DLC-coated black buckle. 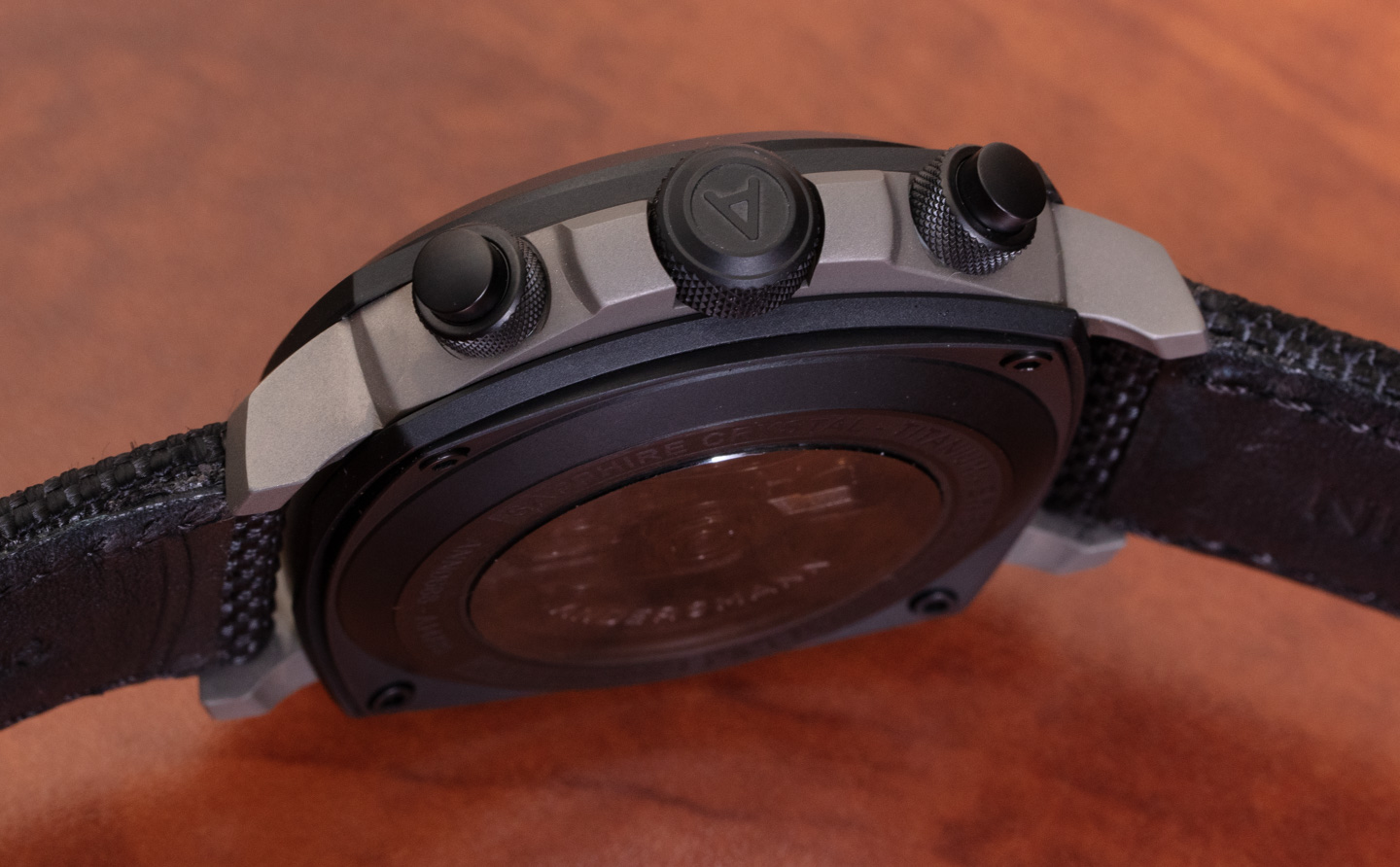 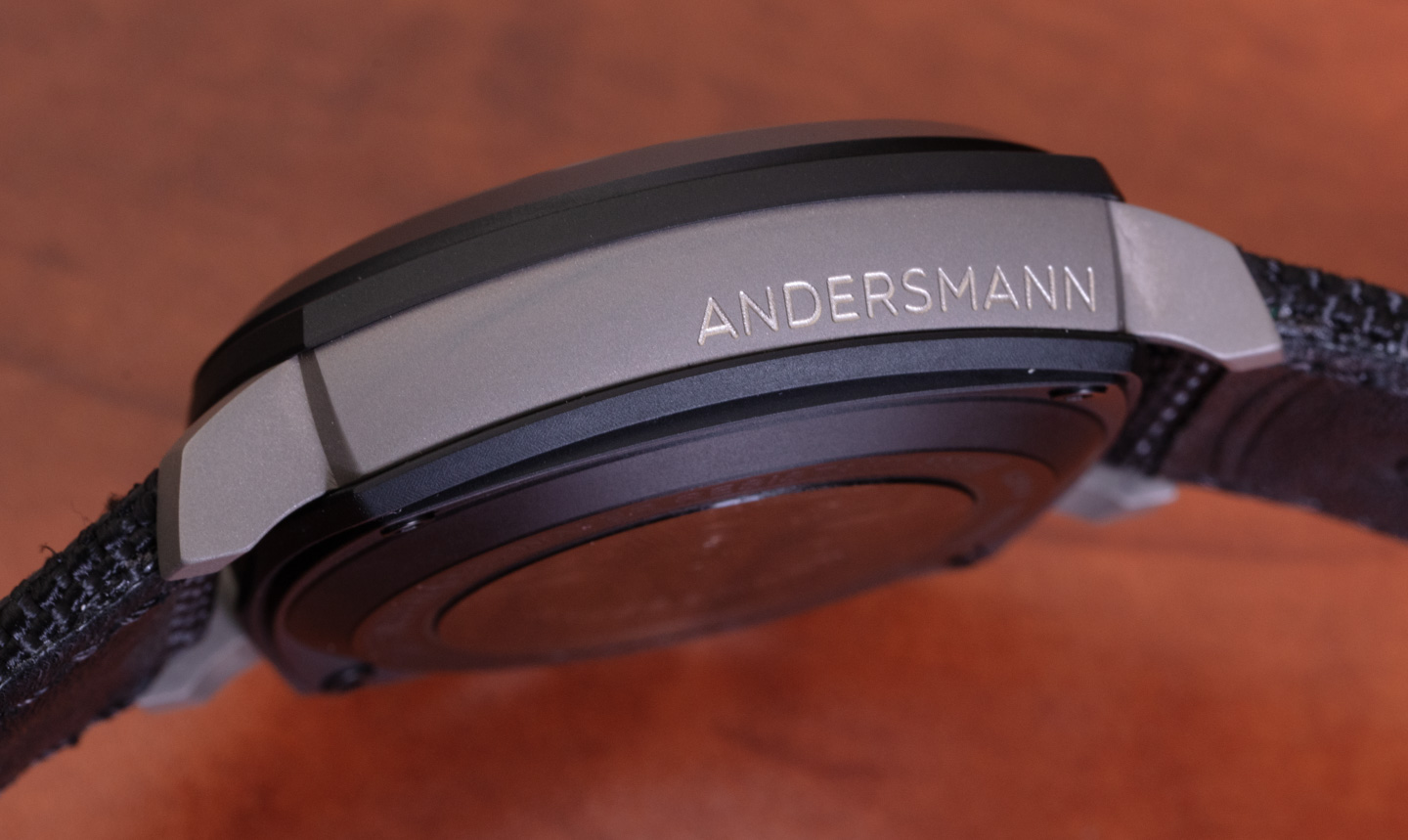 Through the rear of the case, you can view the automatic movement through the gray-tinted sapphire crystal window. The movement is a rare one even though it was supposed to be a more volume-production mechanism. The ETA A07.211 was part of the Valgranges mechanical movements that Swiss ETA released in 2009. Similar in function to the ETA Valjoux 7750, the A07.211 is a bit higher performance and wider, with the intention of fitting into larger timepieces. For example, look at how wide the date window is placed out on the dial. If you think about it, that is much farther from the middle of a dial than most people are used to. That’s because the A07.211 is a 16.5 lignes (diameter measurement), compared to just 13.25 lignes of the Valjoux 7750. The A07.211 (which happens to be a big 7.9mm-thick) is designed to be appropriate for wider dials, longer hands, and it also offers some performance tweaks. Running at 4Hz, the automatic movement has a power reserve of 54 hours. In addition to the time and date (no day of the week functionality), the movement has a 12-hour horizontal clutch-controlled chronograph. In this execution, the A07.211 has a nice level of perlage decoration on its bridges and a custom Andersmann black-colored automatic rotor. 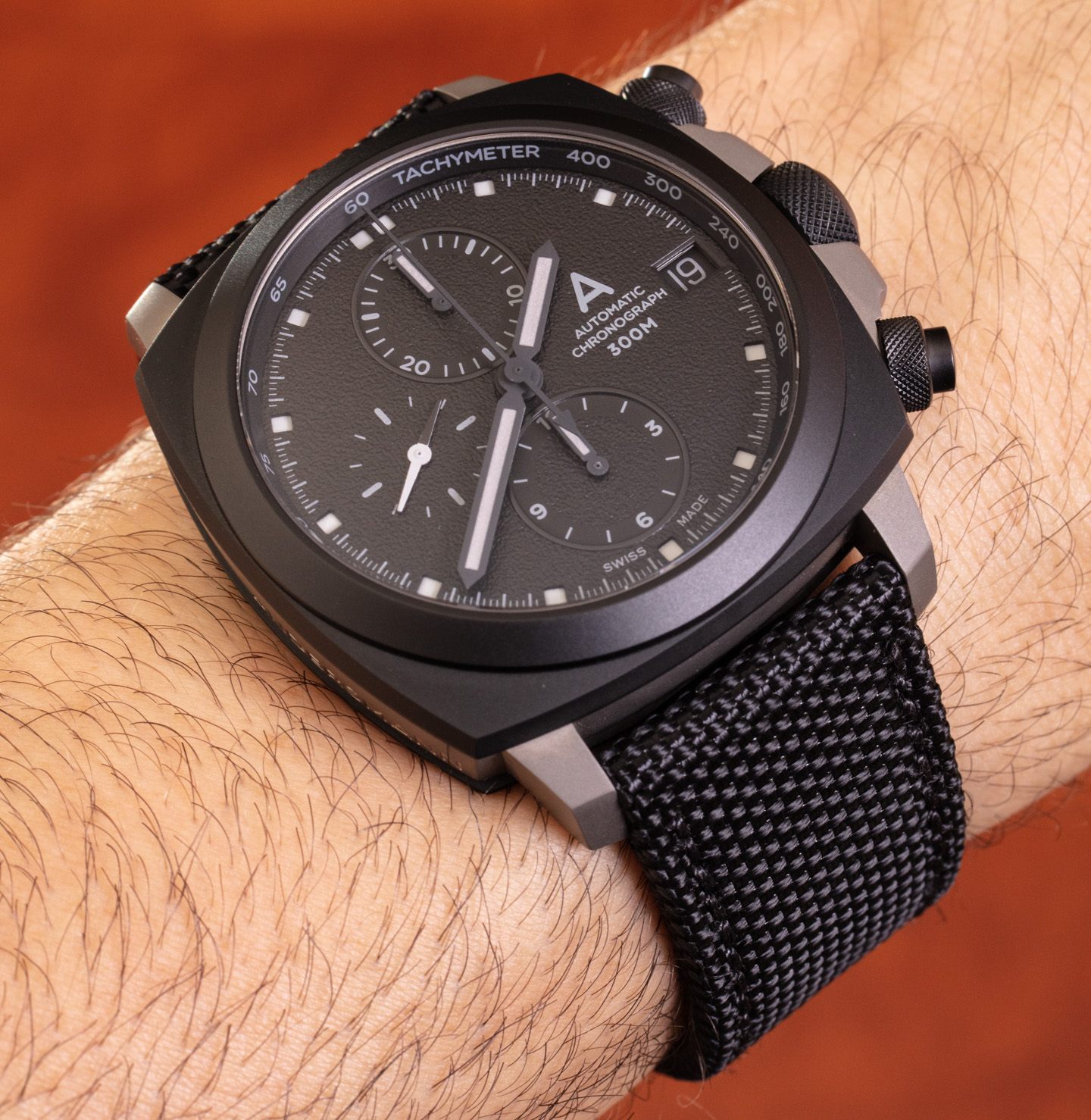