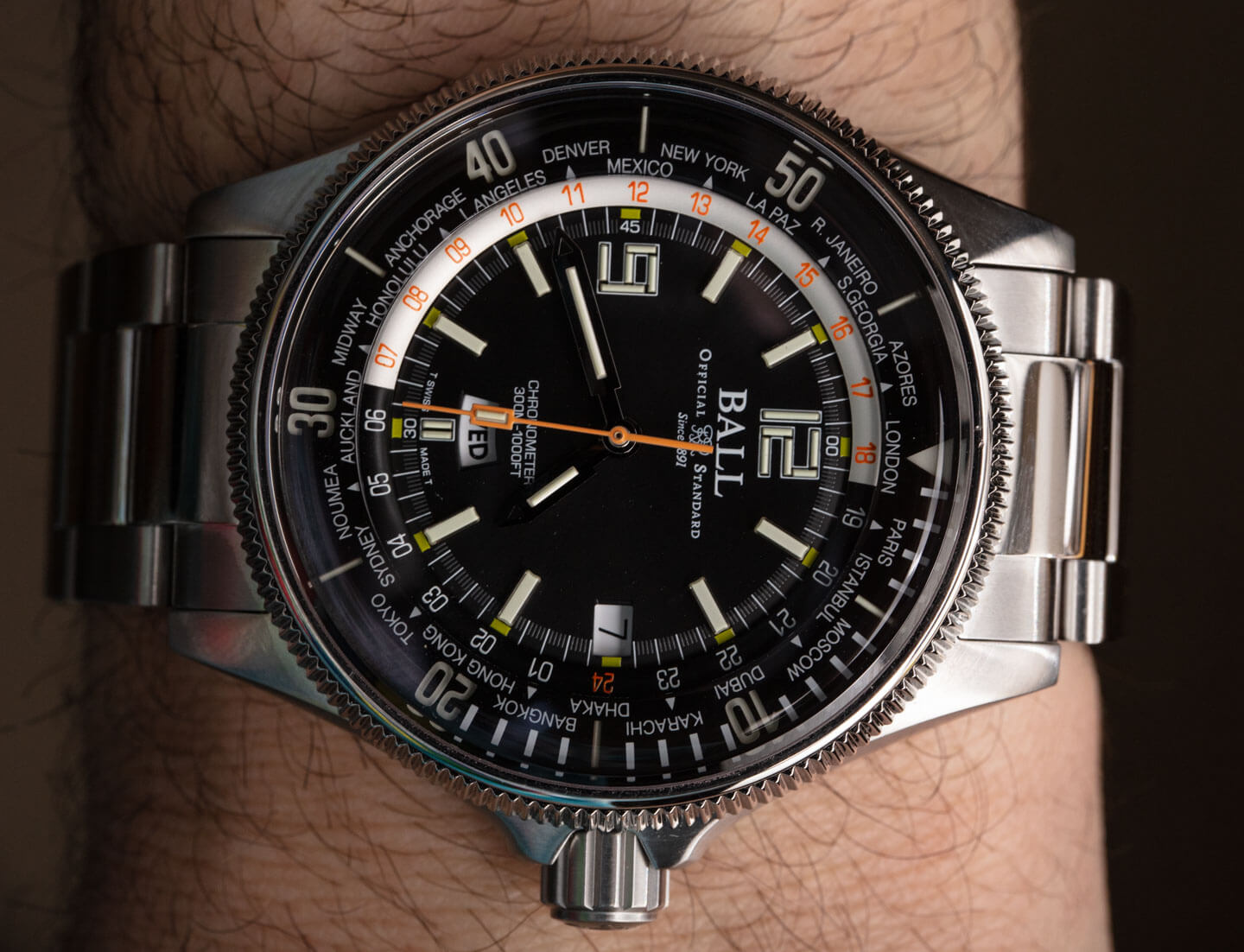 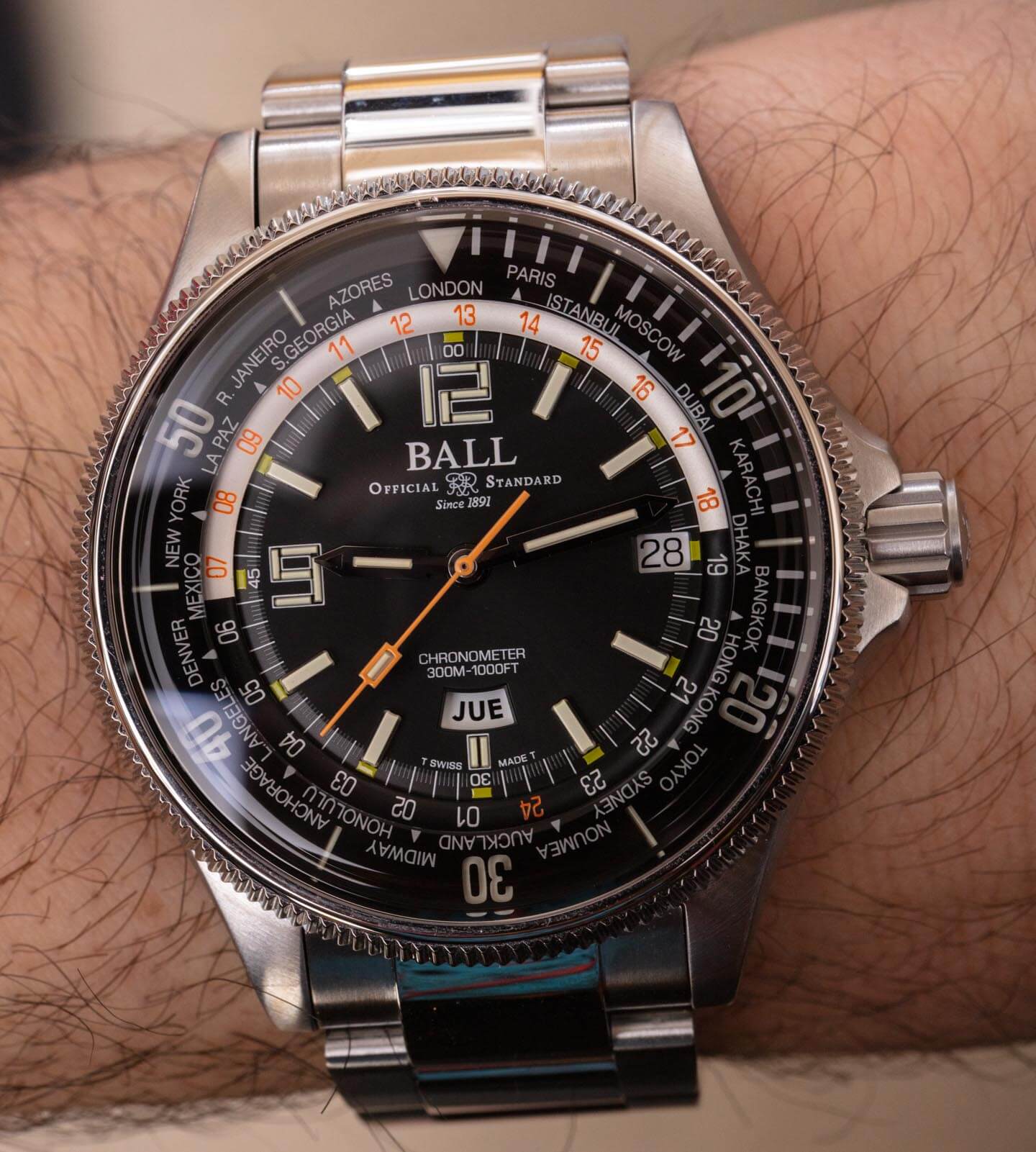 What I like about Ball watches is that they like to revisit their popular models and keep tweaking them over time. This gives Ball products a very iterative feel, which means that new models tend to be improvements of existing models. That is exactly the case with the Swiss watch maker’s Engineer Master II Diver Worldtime watches. Today, I review the reference DG2232A-SC-BK Engineer Master II Diver Worldtime (a limited edition of 1000 watches), and in 2016 on aBlogtoWatch I reviewed a watch with the same name in the reference DG2022A-S3AJ-BK. Let’s examine how Ball has tweaked and updated this particular model family, and when you’re done, be sure to catch yourself up with our report on what the brand has been up to these last few years.

Ball has a number of dive watches and a number of worldtimer (worldtime) watches. This just happens to be one of several models that seem to combine these two functionalities. Traditionally speaking, you’d have no need for a world time function in a diver’s watch (if you are diving), but the reality today is that diver-style watches are so popular that more than enough of them find a home on the wrists of regular travelers. The resulting mix of style and functionality offers a durable 300m water-resistant package with an elegant worldtime function that immediately allows the wearer to know the time in any of the 24 major time zones. 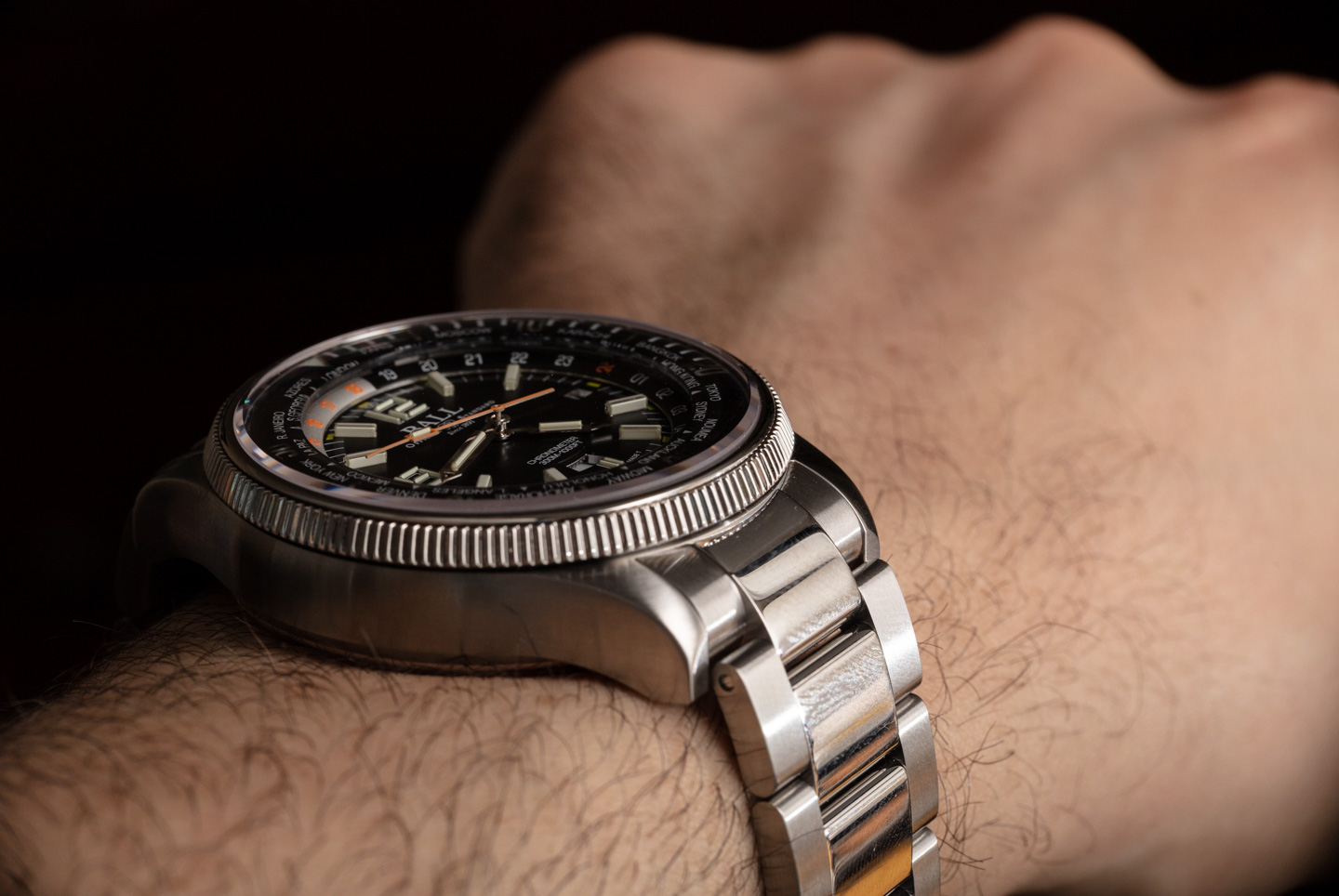 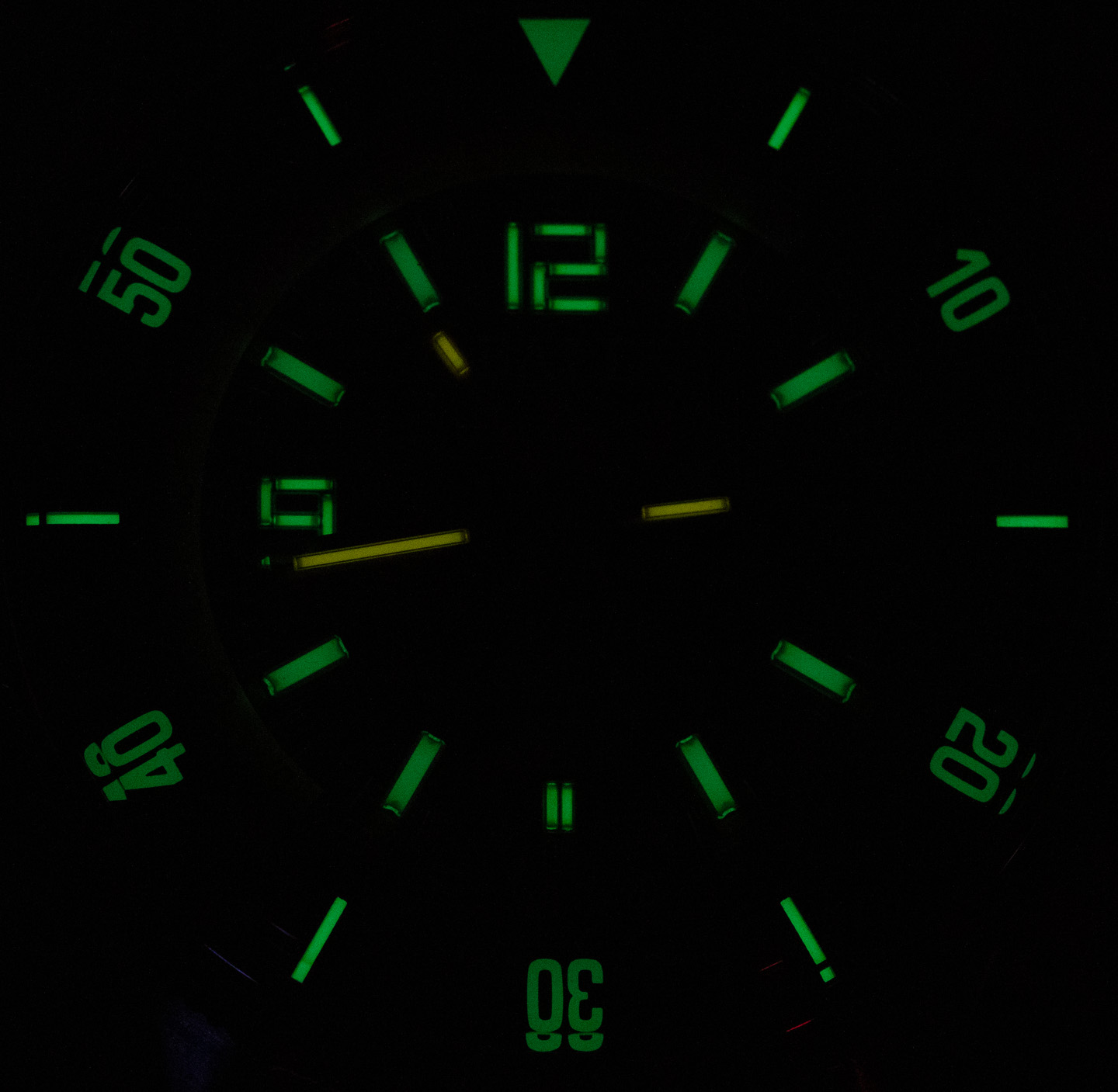 While the movement inside this watch operates the same as in the 2016 model, pretty much everything else about the watch has been changed. This is despite the fact that the watches are both named the same and exist in the same Engineer Master II family. Let’s start by talking about the 42mm-wide steel case (which is down from the 45mm width of the earlier model). While the proportions are similar, the case now has one crown, not two, is smaller, and now has a rotating bezel. The previous model had two crowns, with the second used to operate the internal rotating bezel. Ball has now developed a bezel that can be turned by hand, but still moves the inner ring while preserving water resistance.

This inner ring is used for two functions, but they can’t be used at the same time. One function is your standard 60-minute diver-style timer. Tritium gas tubes light it up in the dark, and I like the slightly curved look of it under the sapphire crystal. This watch has a much more elegant sense of dial depth compared with the previous model (even though they both had deeper dials). Going back to the bezel, it has a polished, notched periphery for better grip, and in general looks better than the asymmetric two-crown setup of the previous Engineer Master II Diver Worldtime watch. 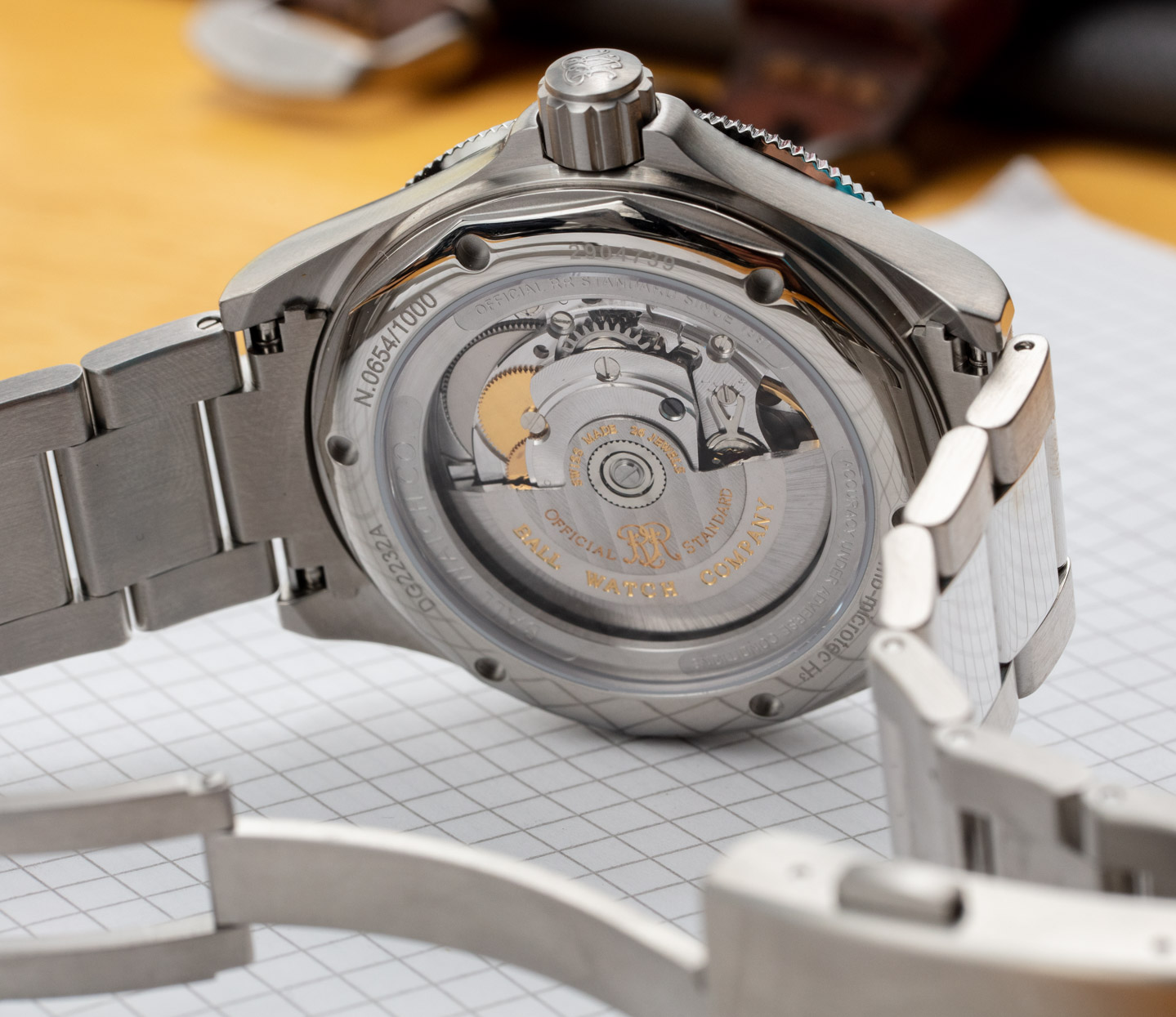 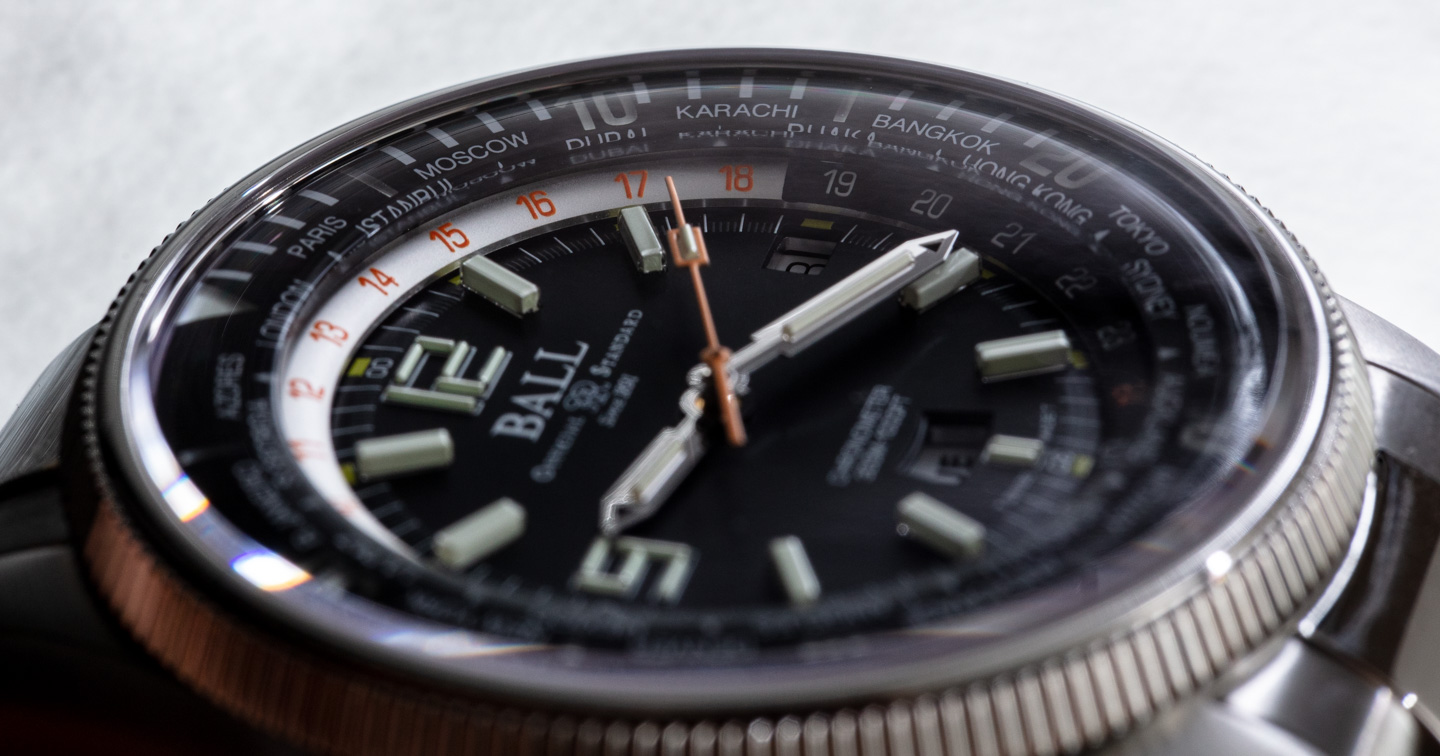 The 42mm-wide steel case is also 15mm-thick and has a roughly 49mm lug-to-lug distance. It also now features an attractive display caseback that offers a view of the decorated caliber BALL RR1501-C. This movement is a base Swiss Made ETA 2836, but it has been modified with the world timer ring feature. The movement has also been given a COSC Chronometer certification.  The world time ring moves when you adjust the time in one direction, but not in the other direction — that is how you initially set it. You then turn the bezel so that your local time zone city reference name is at the 12 o’clock position. From there, you can observe the current time in any of the 24 major time zones. The dial also includes a date and day of the week window, which are separated with one at 3 o’clock, and the other at 6 o’clock (a style that Ball pulls off rather well).

With accents of orange versus red, the DG2232A-SC-BK watch dial is more refined than the previous Engineer Master II Diver Worldtime in both visual aesthetics and legibility. Removed are some of the unnecessary dial textures, and the visual separation between the inner dial for the time and the outer dial for the rotating bezel is more distinctive. In a sense, the newer watch has a slightly more vintage-dial vibe but in a good way that celebrates rules of analog dial readability, which have been mastered long ago, and in many ways forgotten more recently. This is because most modern watches are designed in CAD, and brands don’t do enough physical watch prototyping to get things like dial colors, textures, and finishes done correctly. In the past, this was not possible, so by strictly relying on physical prototypes to design watches, designers of the past were never misled by the differences between how an object looks on a computer screen versus in real life. 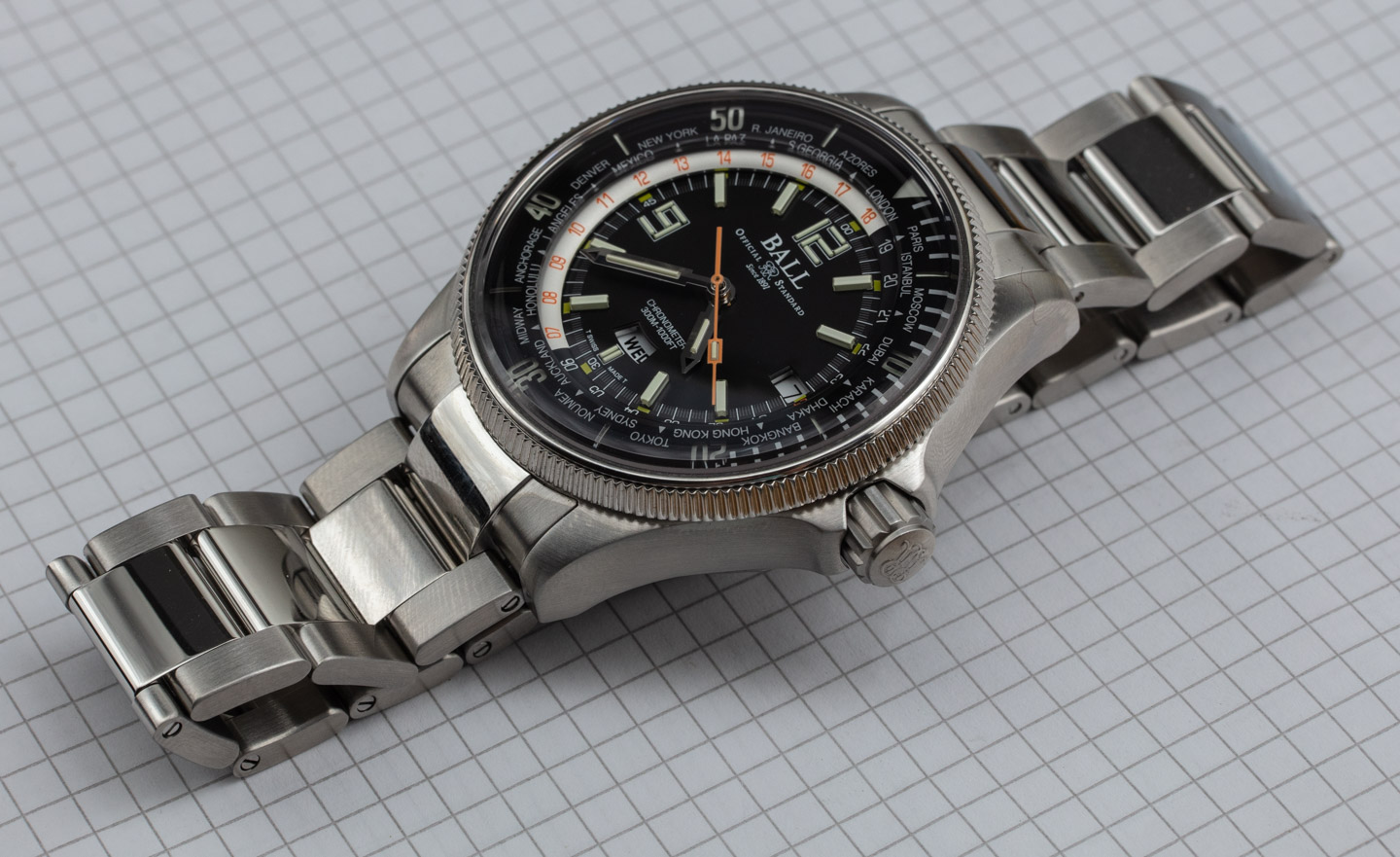 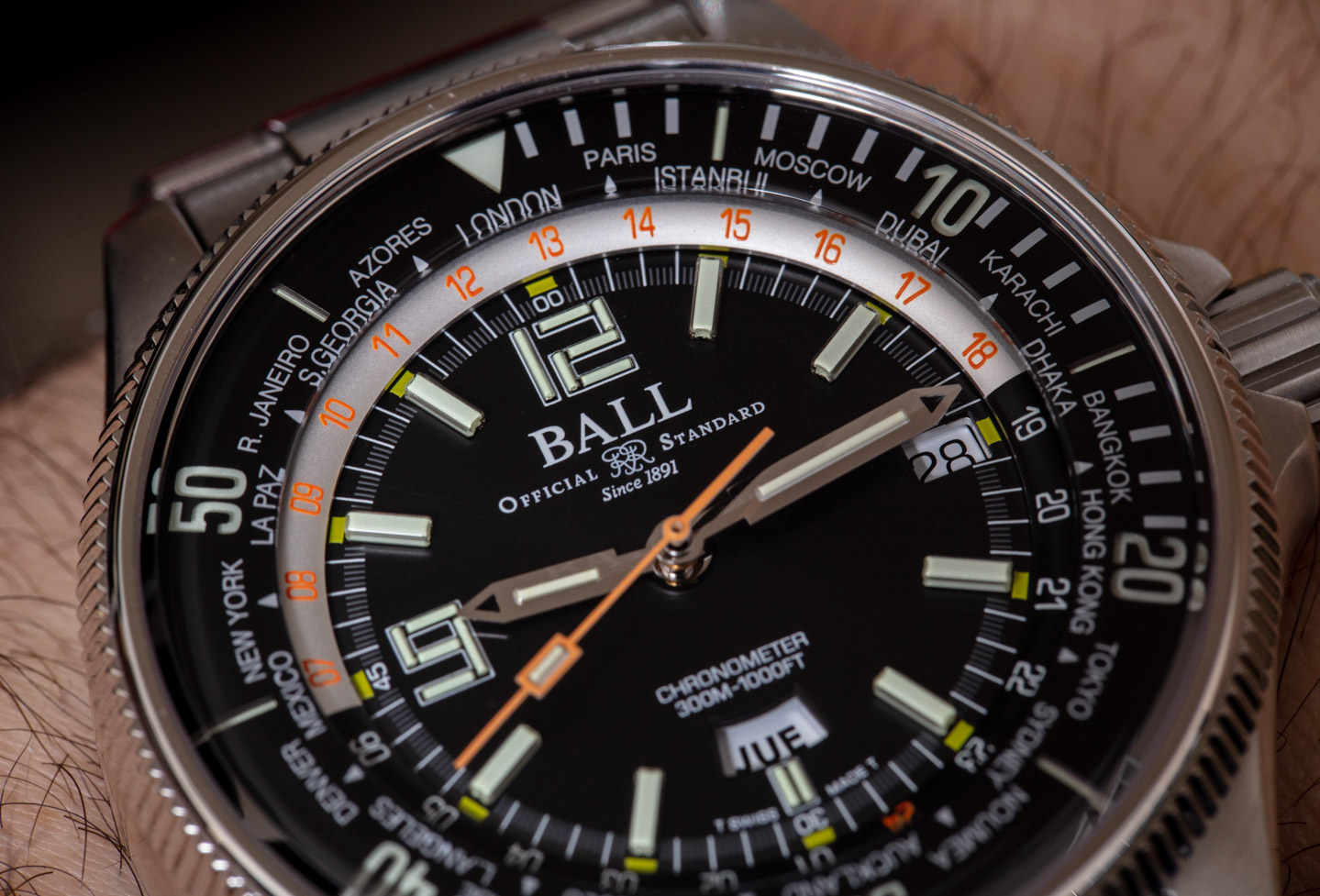 As always, Ball makes good use of self-illuminating tritium gas tubes on the dial’s hands, as well as for the hour markers. In the dark, the Engineer Master II Diver Worldtime is a sight to behold. By the very nature of how worldtime watches have outer rings and an inner dial, the face to read the time on the watch feels a bit small when compared to the overall size of the case. This isn’t that big a deal, but it does take some getting used to when you have what feels like a larger-sized watch on your wrist, with a comparatively small dial to read the time. Over the dial is a slightly domed, AR-coated sapphire crystal.

Attached to the case is a more traditional three-link steel metal bracelet as compared to the more Engineer Master II-style bracelet of the previous watch. The bracelet has brushed outer links and a polished center link, which is mostly popularized by watches such as the Rolex Daytona or GMT-Master II. In that regard, the DG2232A-SC-BK feels a bit more “generic” than the previous generation Engineer Master II Diver Worldtime, but the look is trendy and I think it suits the overall theme of the timepiece well. 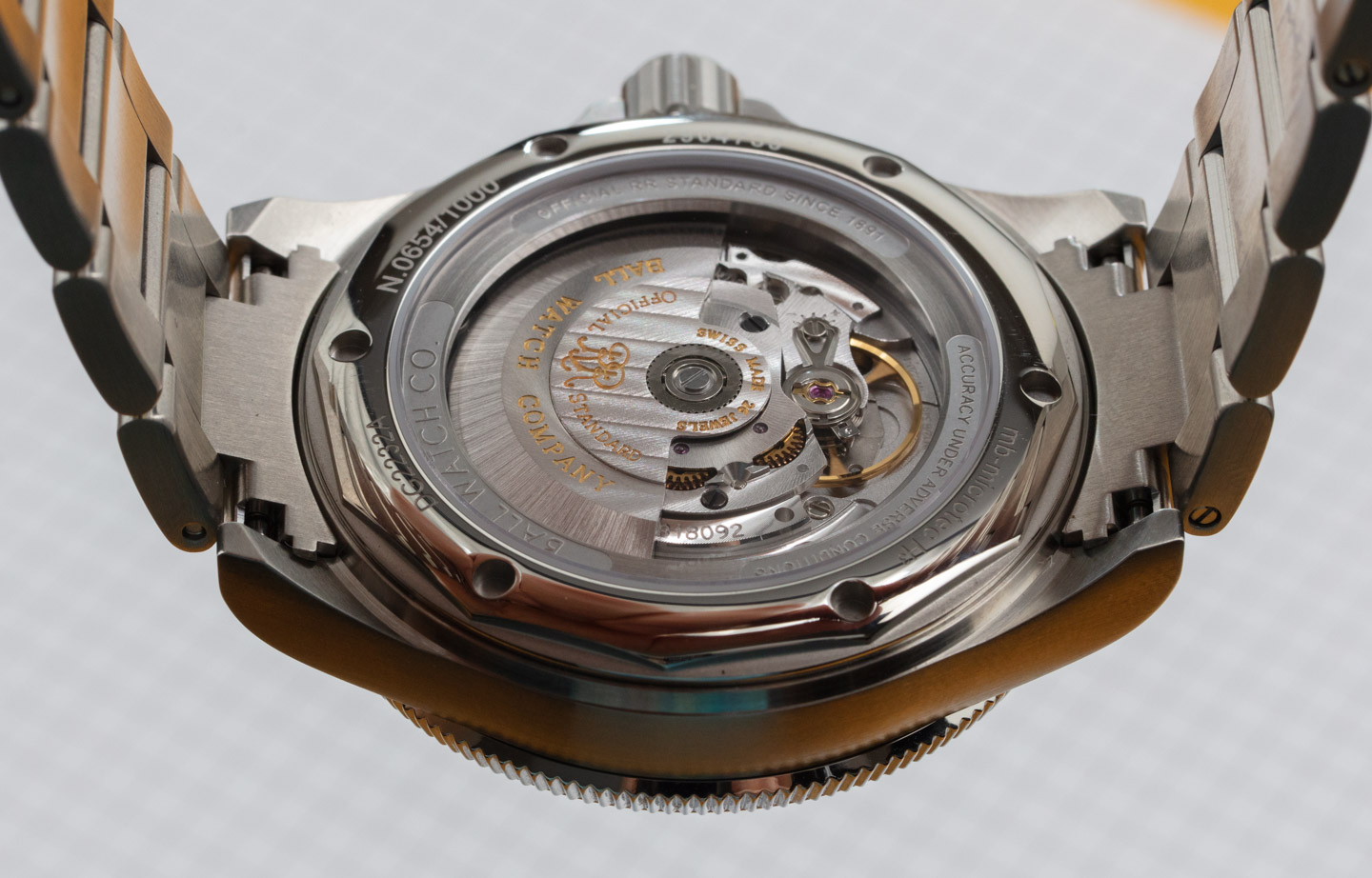 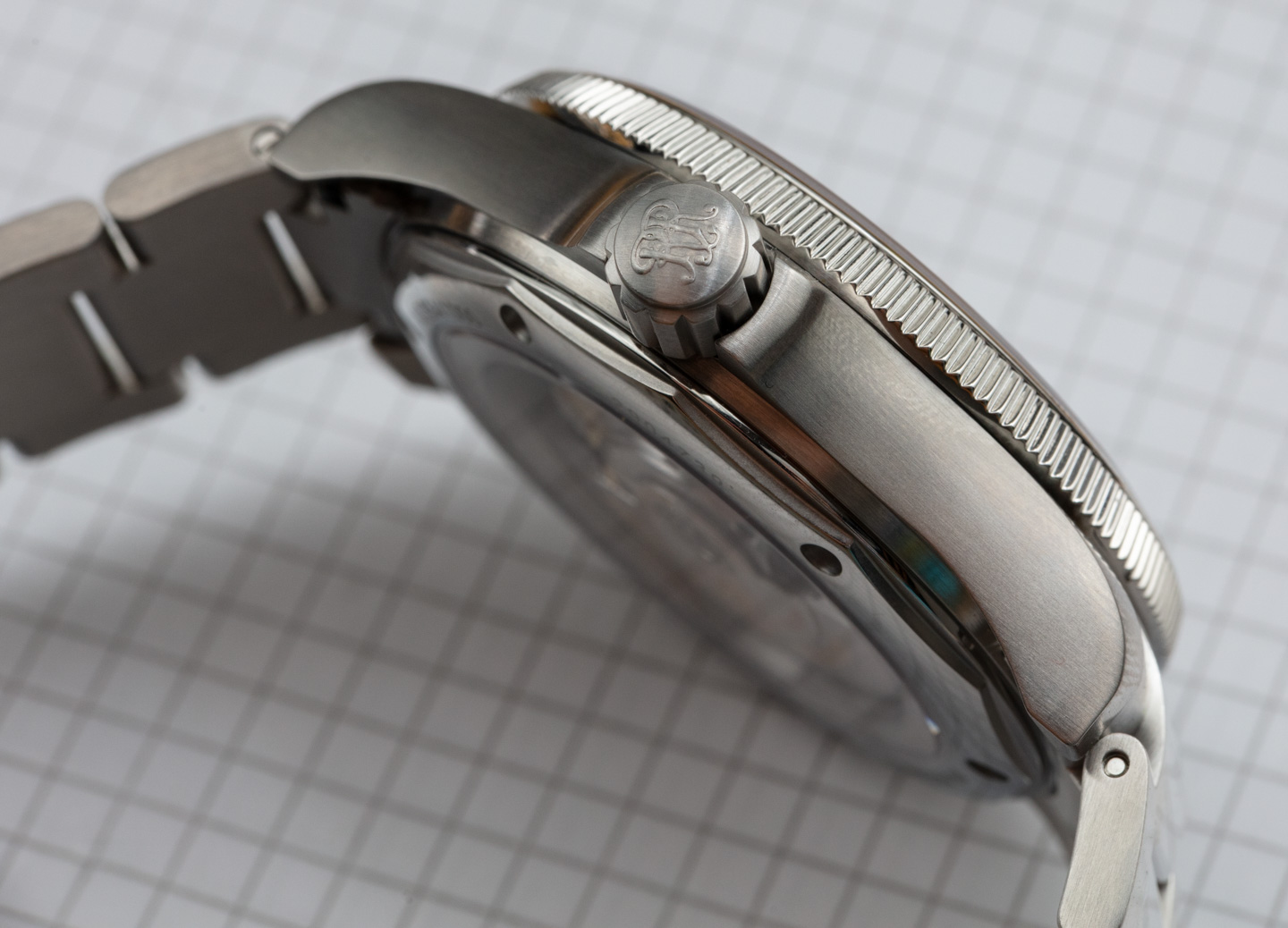 The 20mm-wide bracelet has a well-made fold-over deployant clasp that has plenty of adjusting options given the presence of a half-link, as well as the smaller holes in the deployant itself. It is last-gen technology, but it still works just fine. I do, however, take slight issue with the stamped metal diver’s extension clasp that doesn’t feel as solid as the rest of the watch. I don’t really feel that this is a concern (especially since maybe one or two owners of this watch will ever actually use it), but at this price level, I don’t think there should be any obviously stamped metal components on the case or bracelet.

It can be confusing to sort through the many timepieces that Ball watches produces. Even finding the model DG2232A-SC-BK on its website can be a challenge if you don’t know what to look for. Storytelling from Ball is also thin, meaning that unless you know what you are looking at on the website and on the product pages, it can be difficult to know why the brand made this product or how it is different from ones that came before it. Those who do their homework will appreciate (as I have) that Ball has made a lot of impressive strides to make the Engineer Master II Diver Worldtime a better watch that is more comfortable and is easier to read. It shows that Ball not only listens to consumer feedback, but is also dedicated to the iterative design approach that works so well in the watch industry (Rolex and Casio are also two companies famed with their iterative approach to product design and refinement.) 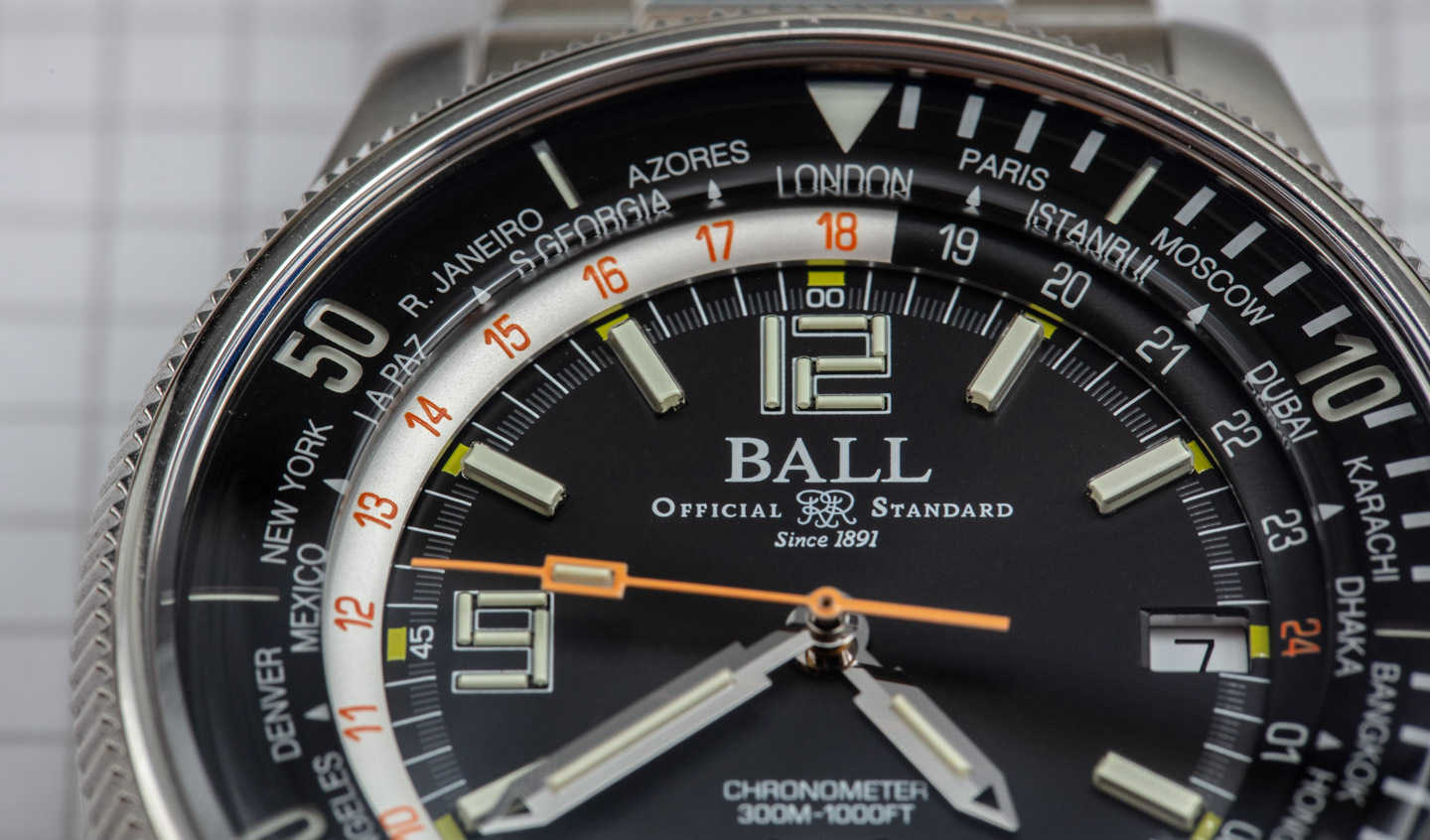 One again, the reference DG2232A-SC-BK Ball Engineer Master II Diver Worldtime is a limited edition of 1,000 pieces. Cost for the product is up a bit from 2016, but the watch is better product overall. Price is $3,349 USD. Learn more or order at the Ball Watch website here.

Necessary Data
>Brand: Ball
>Model: Engineer Master II Diver Worldtime reference DG2232A-SC-BK
>Price: $3,349 USD
>Size: 42mm-wide, 15mm-thick, and ~49mm lug-to-lug distance.
>When reviewer would personally wear it: As a durable watch for travel or other circumstances when knowing the time in other time zones would be useful.
>Friend we’d recommend it to first: A lot of collectors enjoy the idea of having diver’s watches with functionality you don’t normally find in such watches. Ball is certainly a place to go, and this is one of the more refined worldtime watches it offers in the sports watch collection.
>Best characteristic of watch: Appreciable refinements over previous generation Engineer Master II Diver Worldtime models. Comfortable case, good durability, and well-organized dial.
>Worst characteristic of watch: User must choose between using timing bezel and worldtime function. Bracelet is attractive but feels a bit generic and underwhelming at price point.