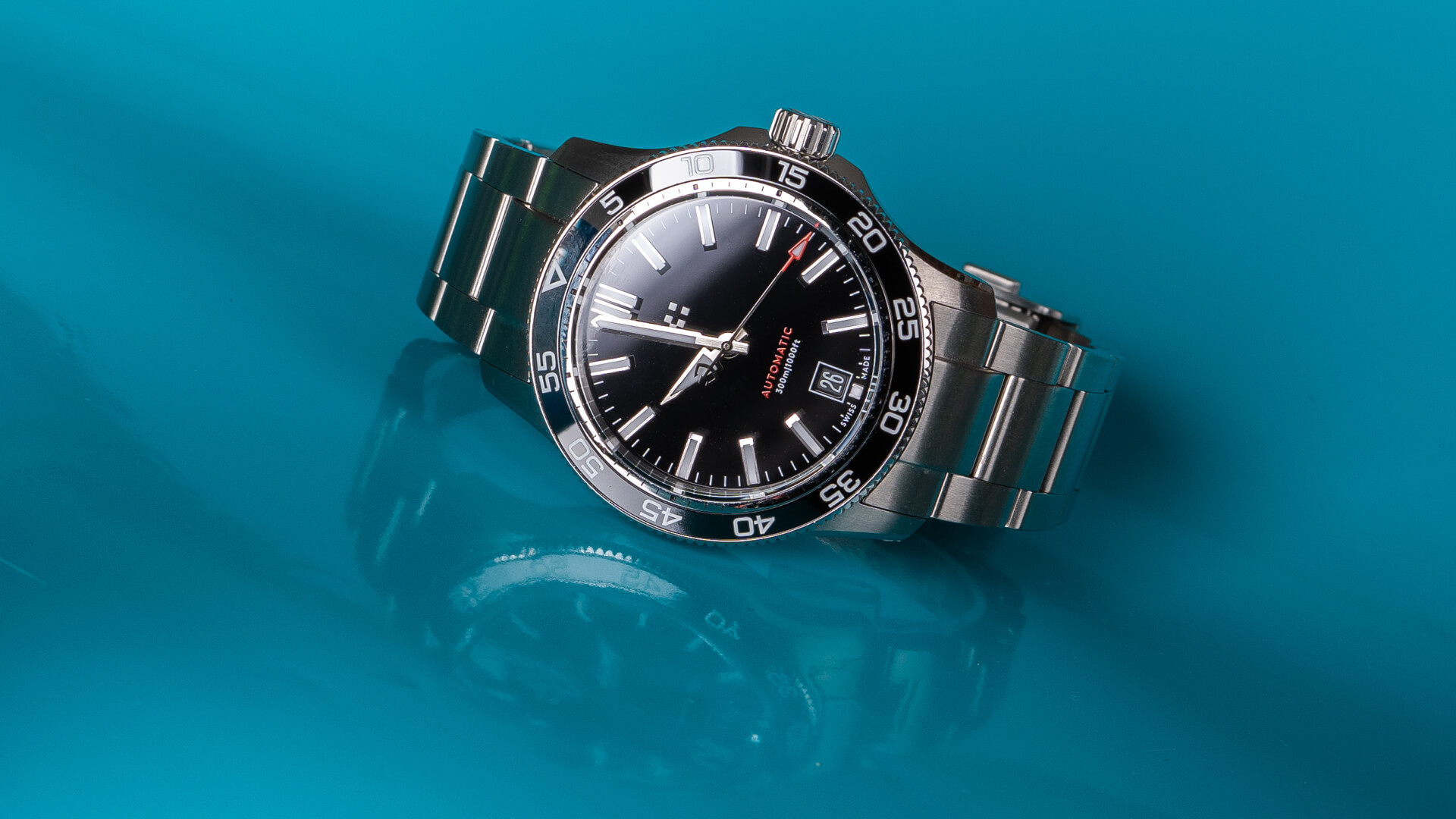 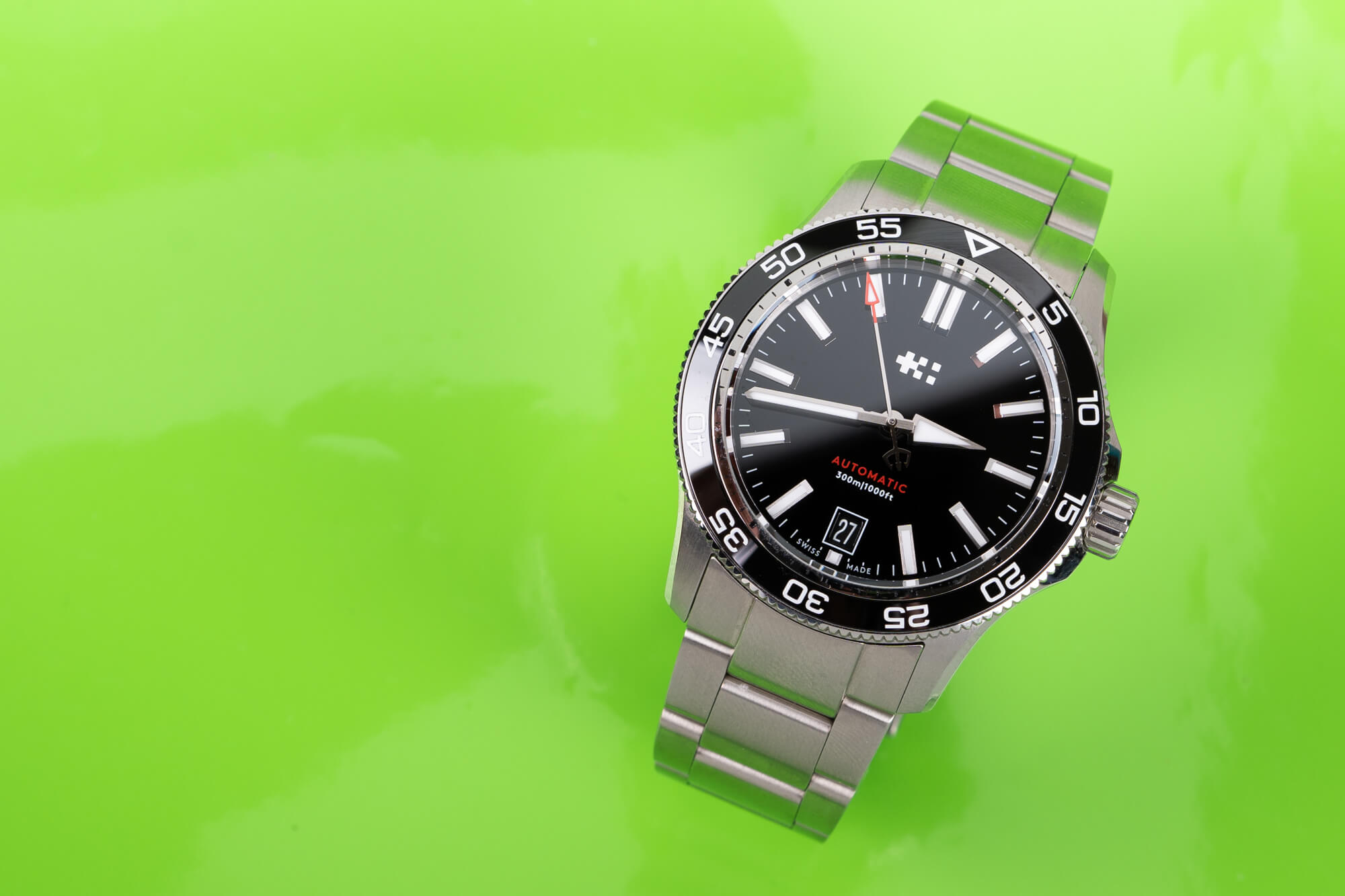 This is the latest Christopher Ward C60 Trident Pro 300. I’ve been sitting with this watch for quite a while. The benefit of this is that, unlike a lot of reviews, where the photos are rushed and the words only slightly less rushed, I’ve been able to experience this watch as a regular part of my collection (it’s not, even though it’s been with me for longer than some watches I have purchased). I’ve had the opportunity to review a handful of models from Christopher Ward, and while this isn’t my personal favorite (how could I not favor the Bel Canto?), I’ll say upfront that the new C60 Trident seems like a culmination of sorts; this watch is the fullest evolution of Christopher Ward, the brand. 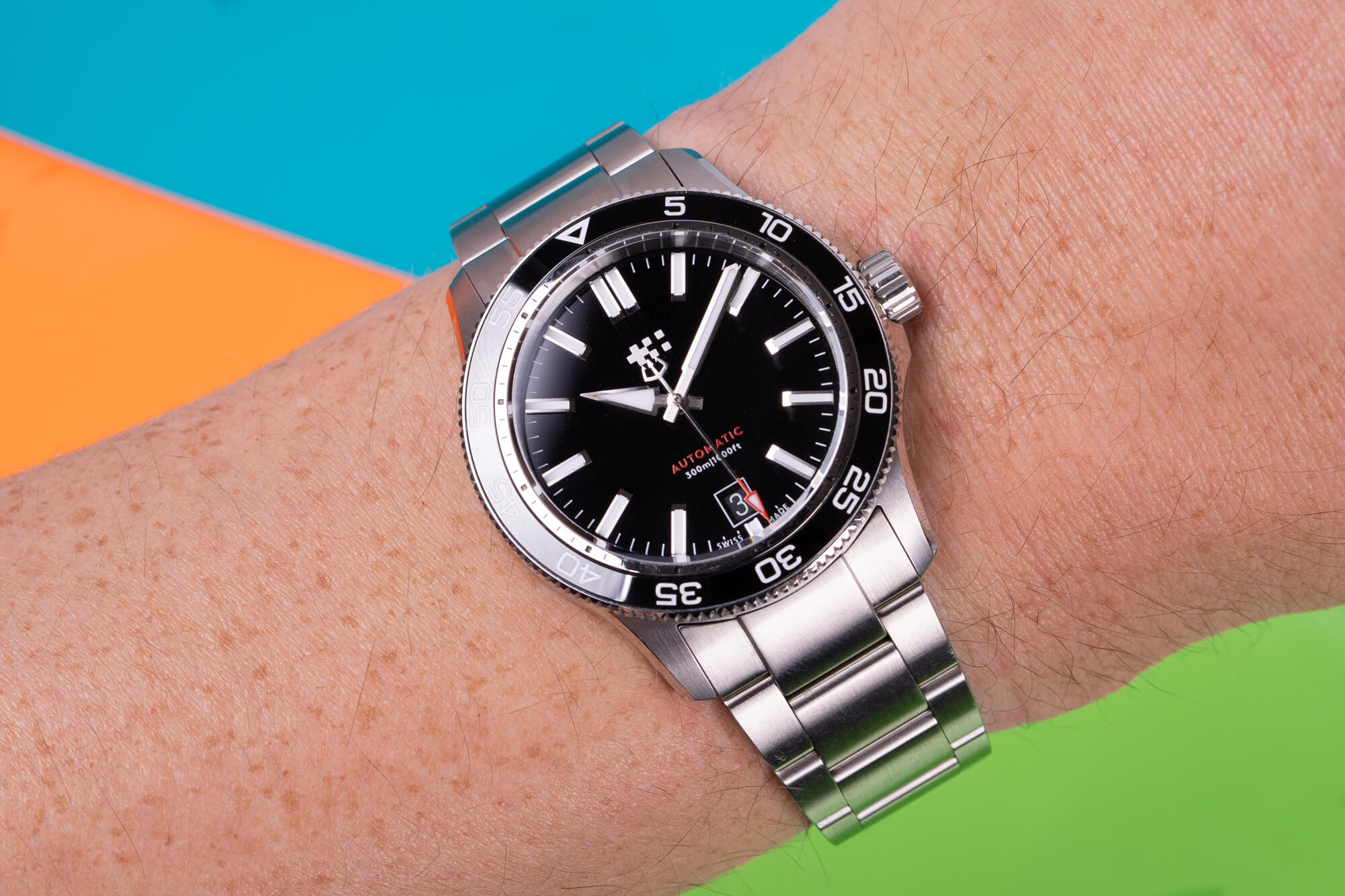 By this point, you must’ve handled a Christopher Ward, right? Though the only place to try them is in England, most watch groups have at least one person who owns one. The brand is wildly popular, and although prices have been creeping up, it’s regularly regarded as offering incredible value. In the past two or three years, the brand has been consolidating and refining its design language. As many people are more than happy to tell you [read: complain about], the brand is on its fourth logo since its founding 18 years ago. I’m sure we’d all love to think that every brand has or should have the same sureness of identity from day one as Rolex, but that’s a bit unrealistic, and Christopher Ward has adjusted its logo as its brand’s image and offerings have evolved and improved. In addition to (finally) settling on the current logo that blends the Swiss and English flags, the brand has also expanded the use of its signature light-catcher case, finally using it for its flagship dive collection, the C60. Save for a few models, like the Bel Canto, almost all of CW’s watches now feature the dynamic case design. 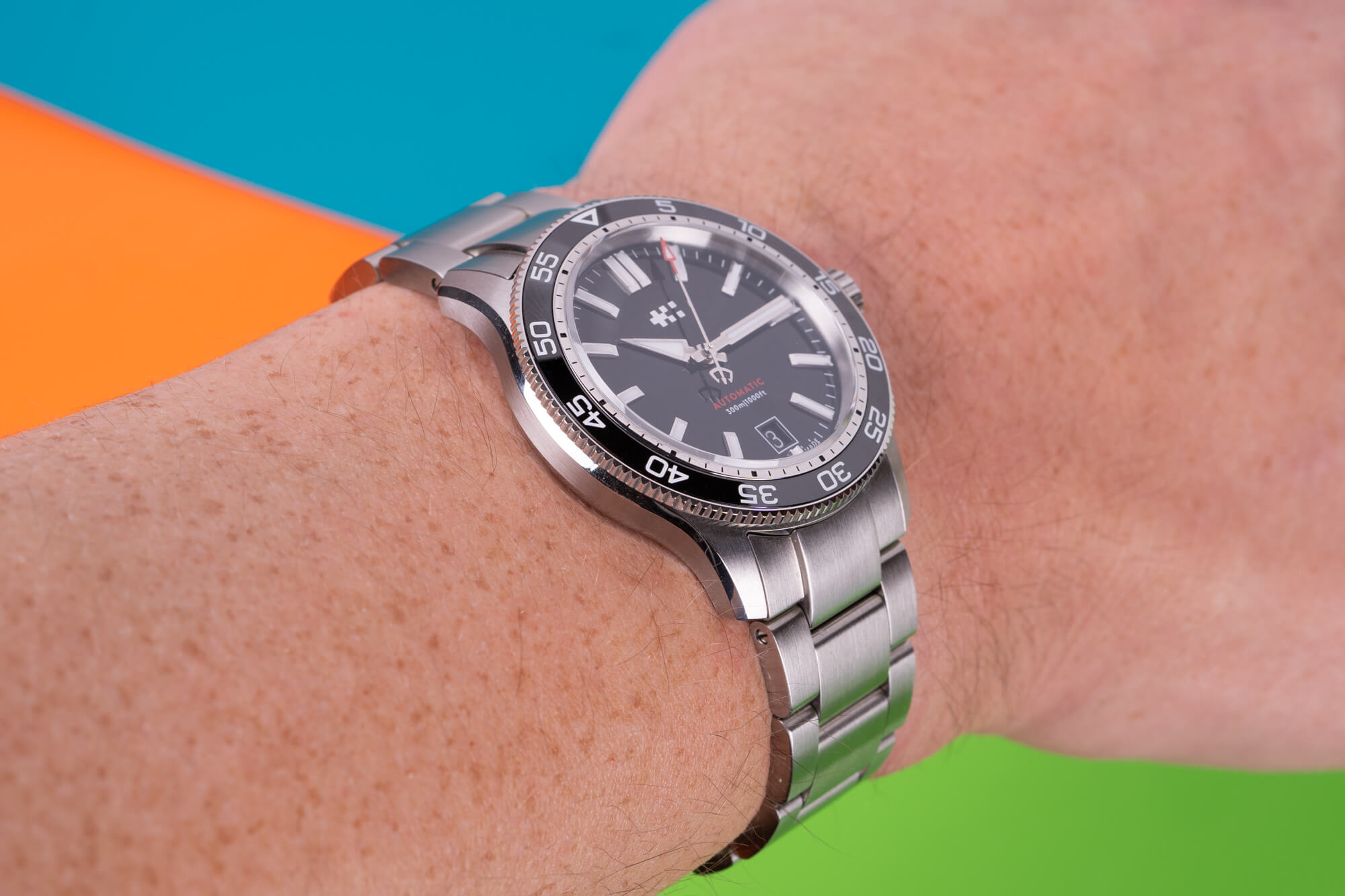 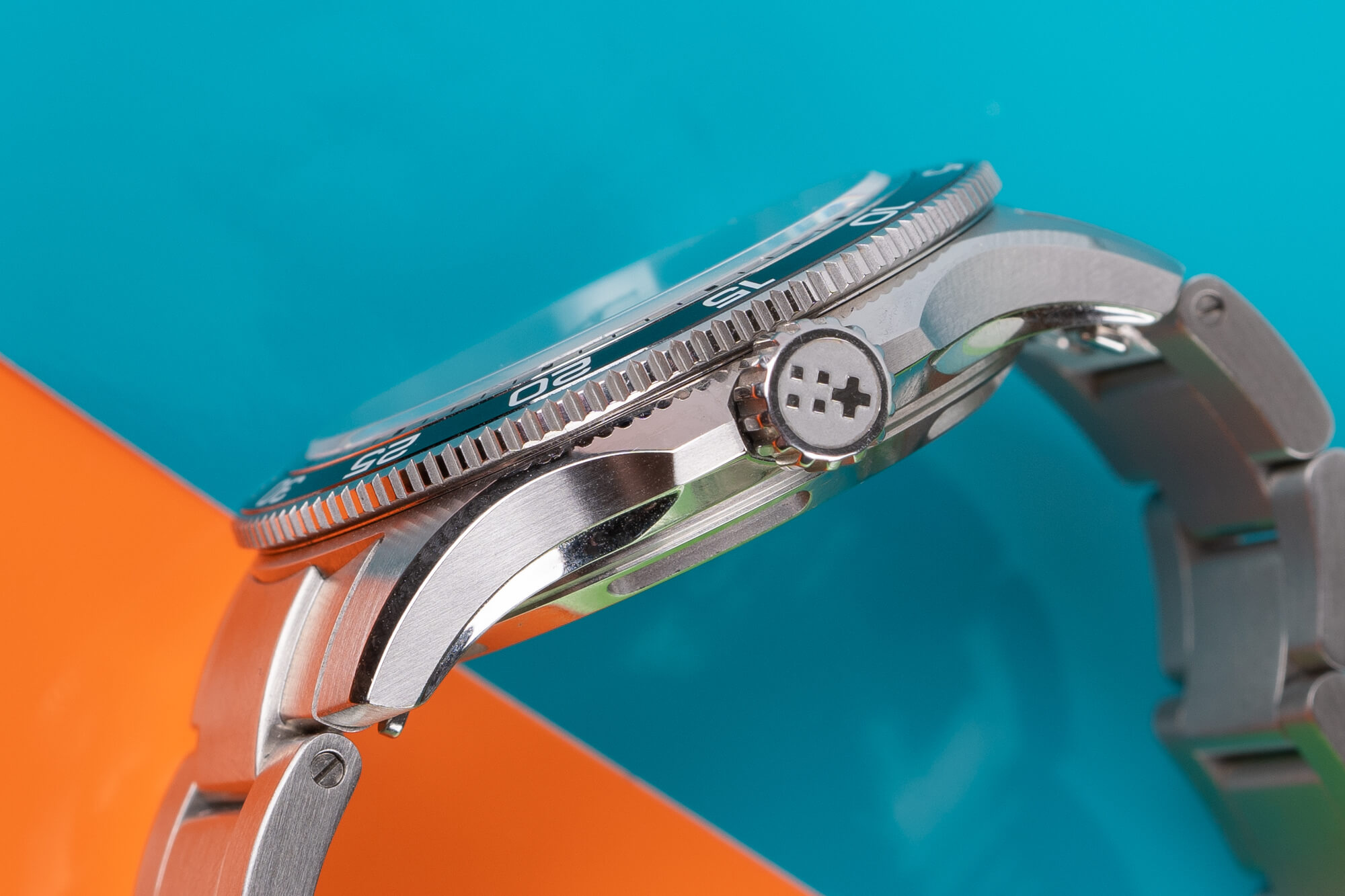 Here it is. The Christopher Ward light-catcher case, on its flagship Trident diver. I’ve described this countless times, and you’ve probably seen pictures or handled or read about it just as many times. Here are the highlights. It does what its name suggests, catching the light with alternating polished and brushed surfaces, none of the straight or flat, all sweeping and curving and creating a dynamic profile. The screw-down crown is perfectly sized and works without issue. The bezel slopes downward and has a two-part ceramic and steel insert that provides an extra minute scale; the fully lumed bezel operates flawlessly, wet or dry, with 120 satisfying clicks. As the name suggests, the watch has 300m of water resistance and the flat sapphire crystal keeps things modern. Design elements aside, the watch wears effortlessly and comes in three case sizes: 38 (seen here), 40, and 42. While the 38mm here is obviously the most compact, with a 45mm lug-to-lug and 11mm height, the lug-to-lug is under 48mm and the height is just over 11mm, making this an eminently wearable watch at any size. By maintaining the proportions, CW ensures that you won’t be dealing with a thick 38mm or a boxy 42mm. (For comparison, when Rolex sized its Explorer I down from 39mm to 36mm, the thickness went up from 11mm to 11.5mm.) 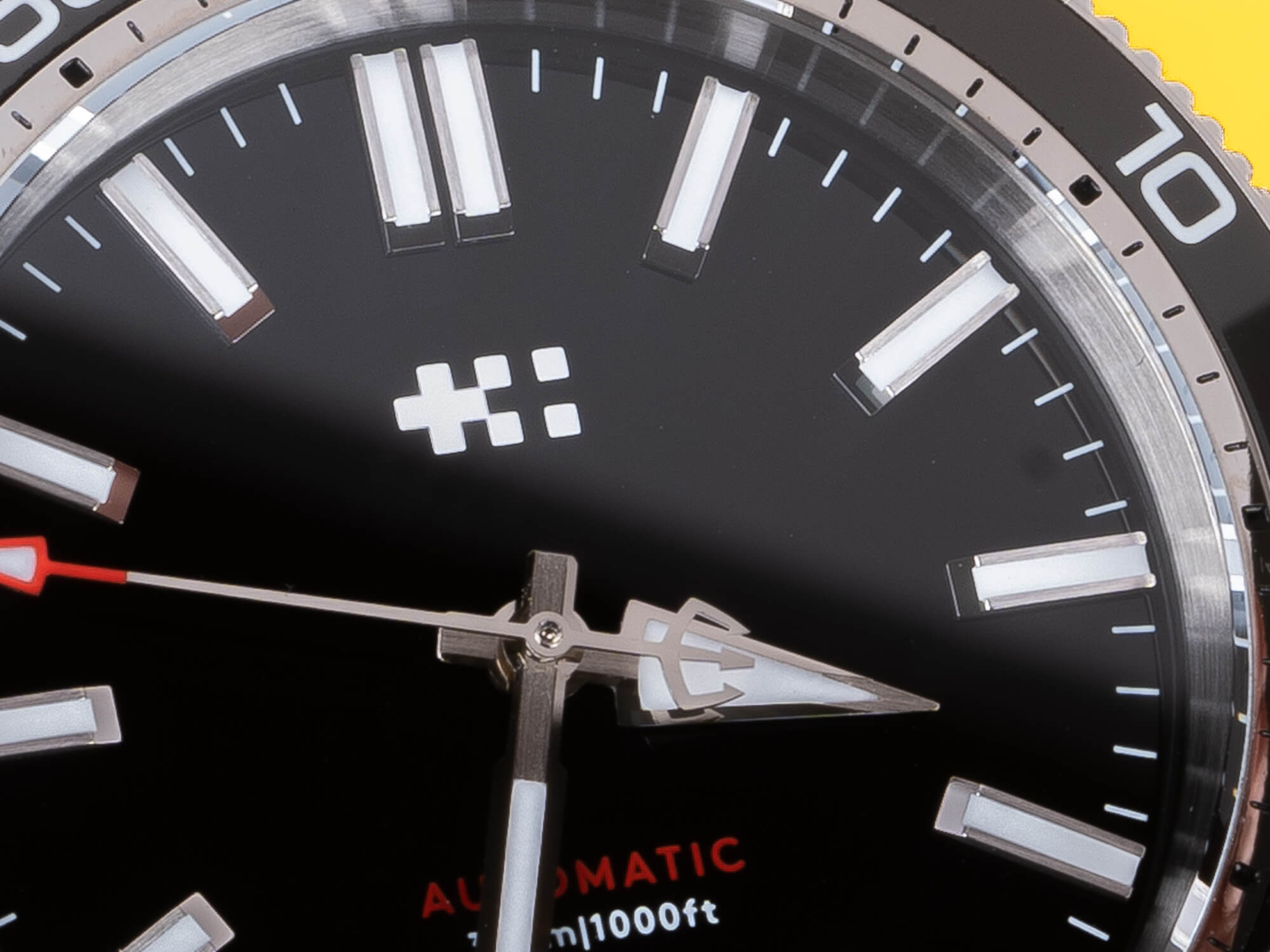 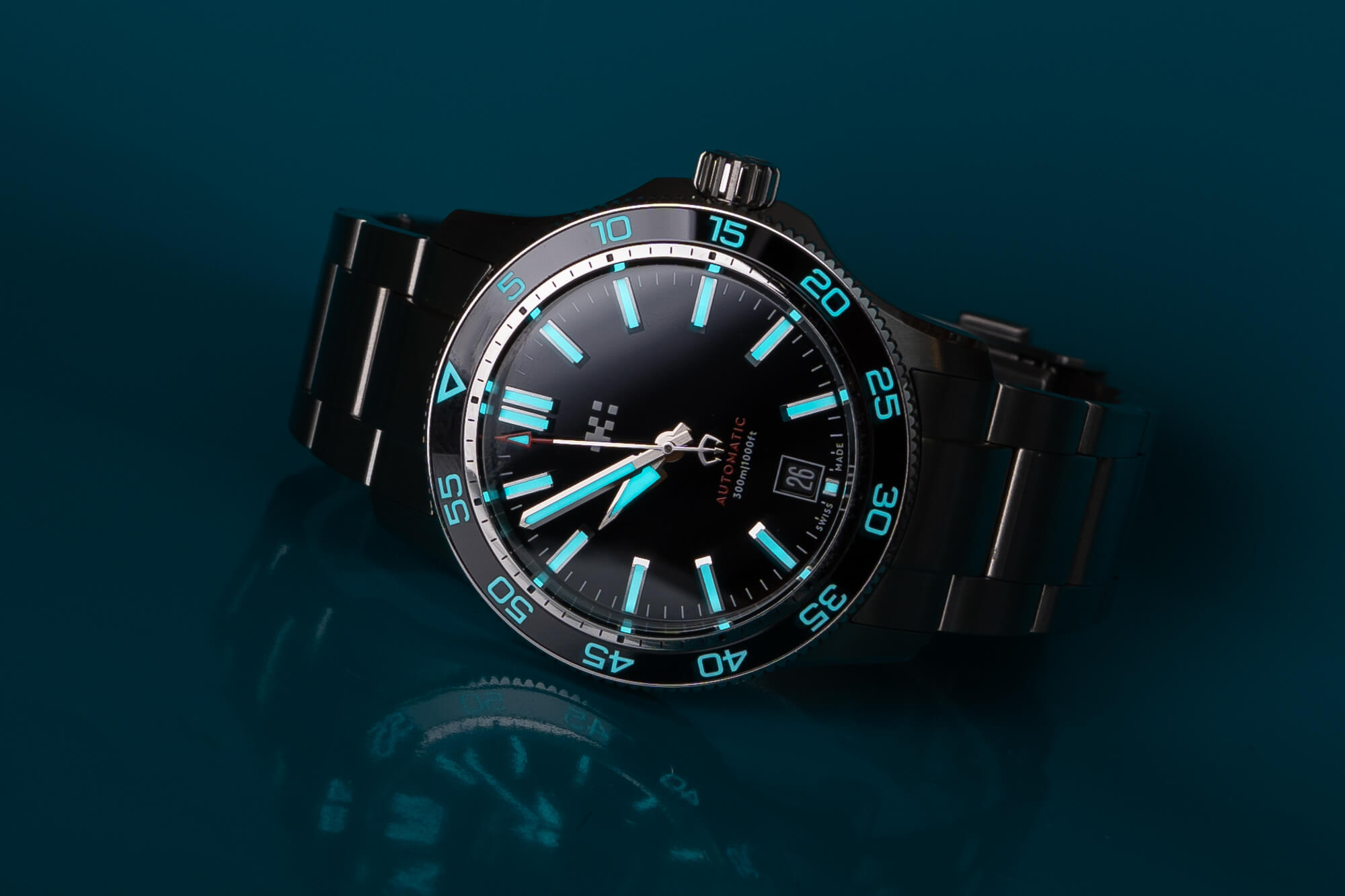 There’s nothing remarkable about the dial’s design. Double batons at 12 with singles around for the hours, the signature CW handset, a simple 6 o’clock date window, spare dial text. Easy. There’s a brushed steel rehaut that surrounds the dial and allows for a seamless transition to the bezel. The Trident Pro 300 is available in black, white, green, and blue, but note that the 38mm case only comes in black or white. While there are certainly trends toward smaller watches (and CW indeed sells colorful 36mm watches), the decision here to limit the smallest Trident to black and white suggests that Christopher Ward is still testing the waters. 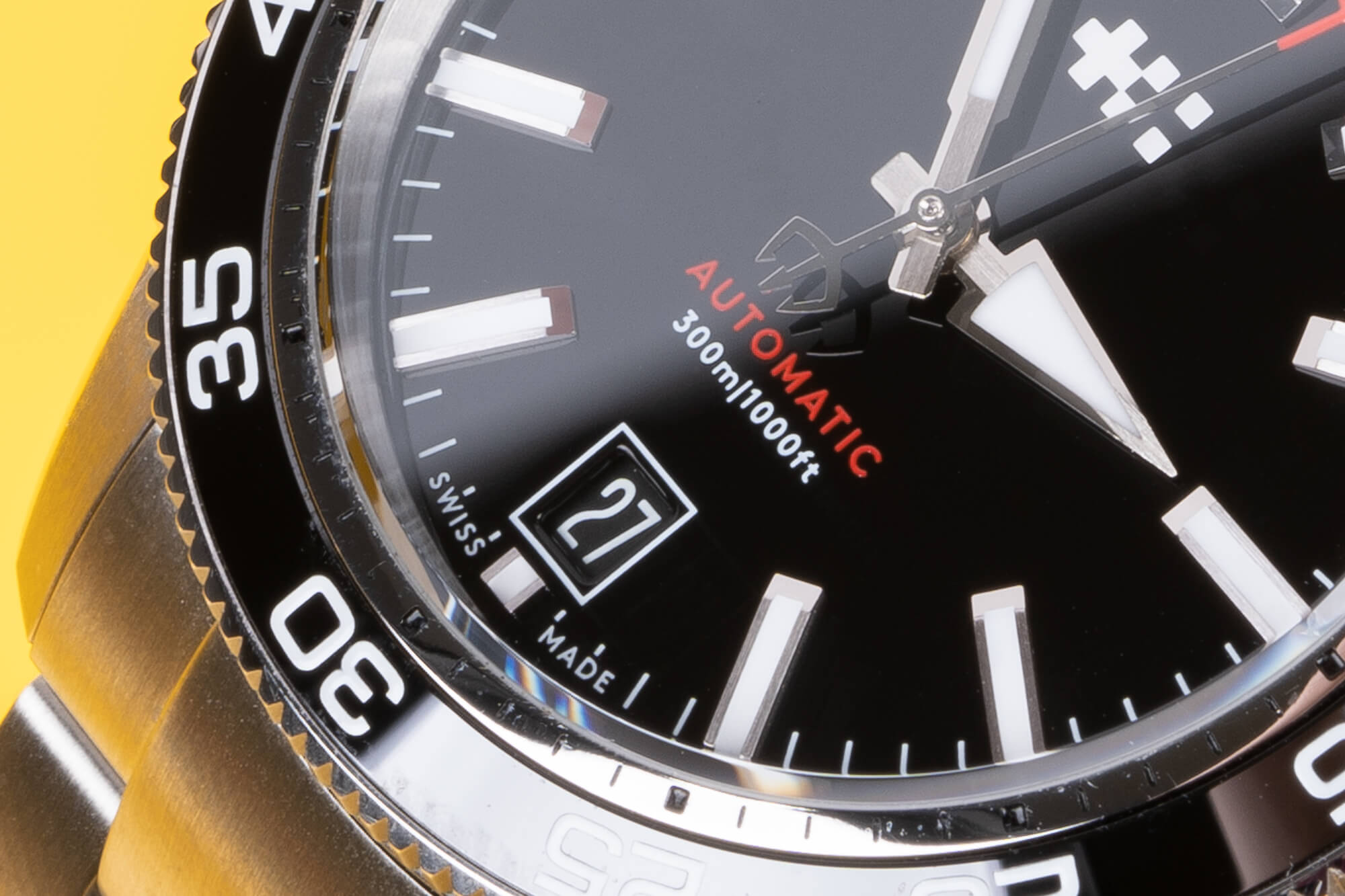 One thing I do wish the new Trident had taken from some of its brand siblings is the updated handset used on the C65 Aquitaine, Sandhurst, and Cranwell models. Those models (three of the most recent releases from the brand) have an obeliskine minutes hand that strikes a better balance between the long triangular hour hand and the applied baton indices. Hopefully, this is the next step for further establishing the brand’s look, but if it’s not, I’m very aware I’m in the minority when it comes to disliking the triangle/baton handset. Whatever my thoughts may be, the hands are well-executed, with polished bevels and ample lume; I’ve also always liked the trident counterweight (which CW does not limit to the Trident collection). And as long as I’m being nit-picky, let me get really granular here and talk about the date window. This is not a soft-edged watch. It’s a small detail but curious that the window has rounded edges on a watch like this, with a sharp-cornered frame. I’ll also admit that it does not matter and is really one of those things that stands out only under a macro lens. 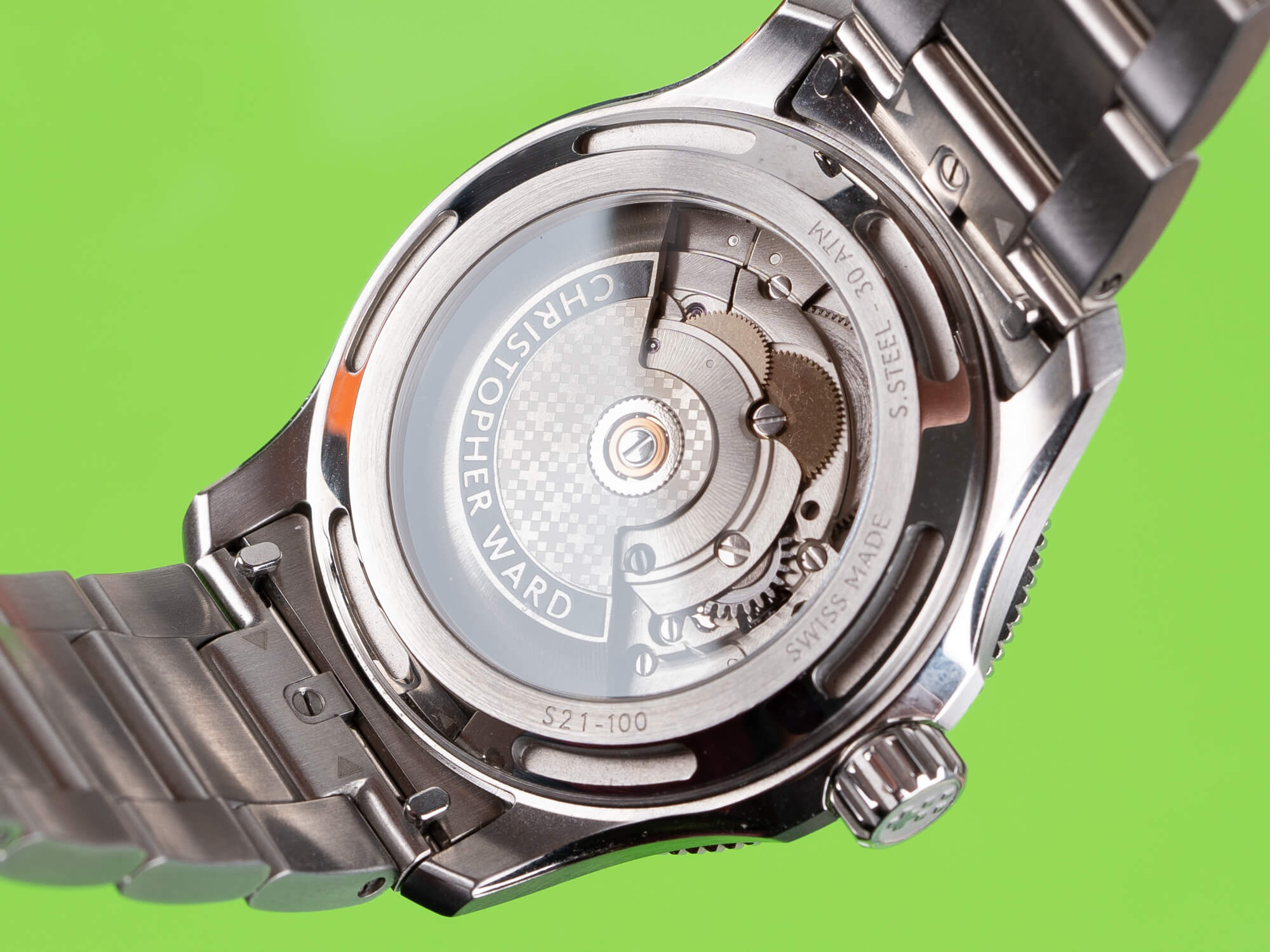 Christopher Ward has employed Sellita calibers for quite some time, now, save for its in-house work that shows up in some special pieces. Here it’s the Sellita SW200-1, and it’s got all the specs with which you’re familiar: 28,800 vph, 38-hour power reserve, 26 jewels, and accuracy at -/+ 20 seconds per day. It’s got a decorated rotor but is otherwise spare in its finishing. Given the brand’s proven capabilities and growing reputation, I would love to see some additional regulation, or perhaps a higher spec movement. Looking ahead, I hope to see one of two things happening with Christopher Ward and its movements. The first possibility is the brand bringing everything or nearly everything in-house. We’ve seen them demonstrate truly impressive watchmaking ability with its JJ01, SH21, and FS01; it would be a delight to see CW develop some more basic movements that can be used throughout its catalog, though this would likely come with a not-insignificant price bump. The other option is sticking with an outside manufacturer for the majority of its offerings, but either having that manufacturer custom-spec those calibers or doing adjustments in-house. At the least, I hope for some more impressive movements as the brand continues to grow—how they do that is up to them.

Recently, CW updated its bracelet in three important ways. The first is a more durable quick-release system. Gone are the flimsy tabs you see in most straps and bracelets, replaced by sturdy ones that are a cinch to engage. The second is the use of screw pins instead of friction pins for the links; one of the more frustrating aspects of old CW bracelets was the curse-evoking sizing process. The third and most exciting is the all-new micro-adjustment system that’s integrated into the (rather long) clasp. The news system is fully concealed and has to be operated off-wrist, but it allows for toolless adjustment of the clasp for fine-tuning the fit. These clasp systems aren’t quite commonplace, but they are growing in popularity, with even smaller brands like Nodus, Formex, and Halios developing their own. In three years, I expect there will be far more watches with them than without. 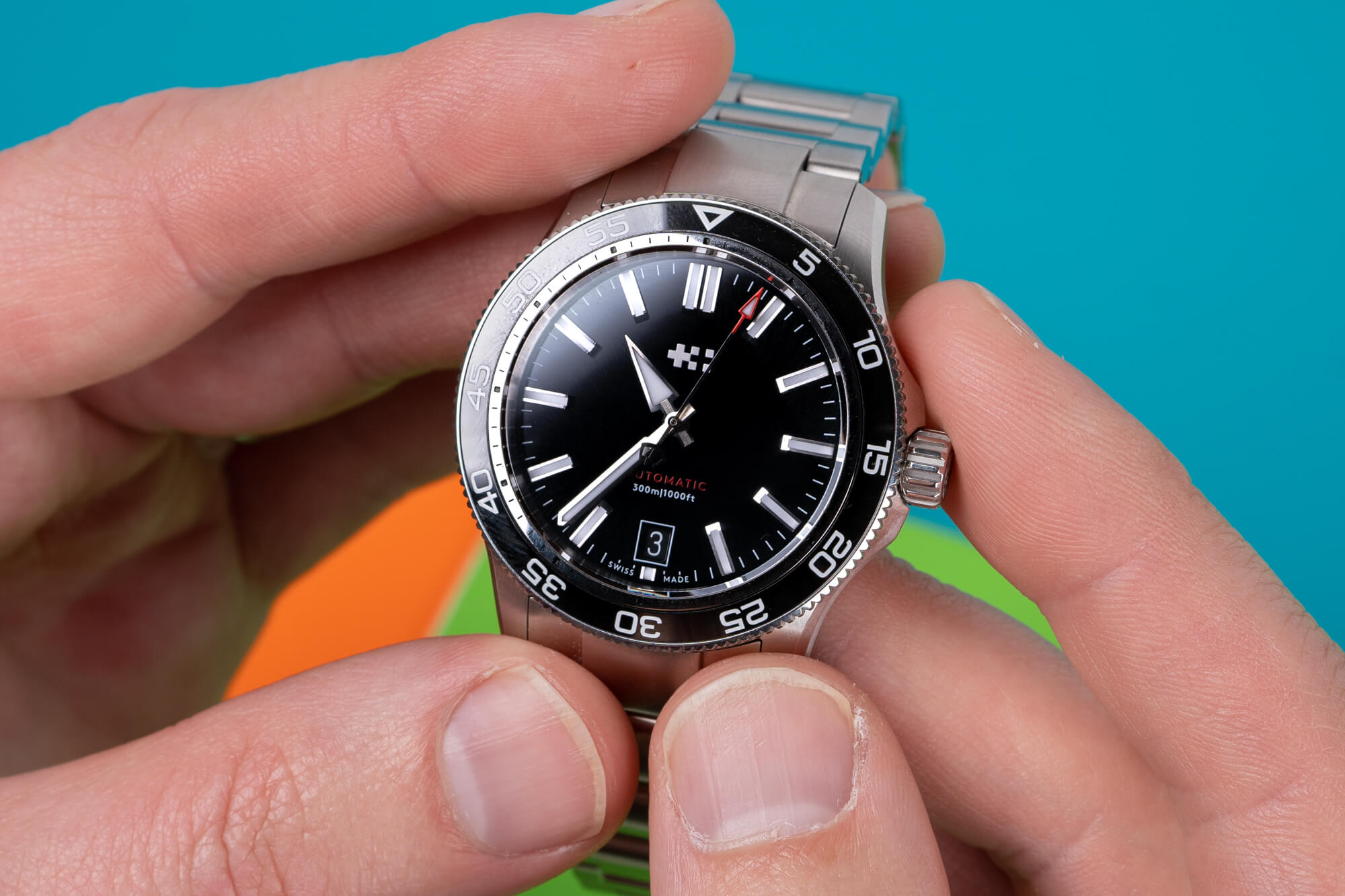 I’ve said it before, but it does really seem like Christopher Ward can do no wrong. Finally bringing the light-catcher case to the Trident series is a no-brainer and I’m frankly surprised it took this long. Now there will be no mistaking a Christopher Ward for anything else, or vice versa, and that has quite a powerful marketing effect. With three different sizes, four colors, and three different straps, there’s something for every wrist. You’ve got no shortage of choices when it comes to divers, but here’s one you can count on being a hit on the wrist. The Christopher Ward C60 Trident Pro 300 is priced starting at $850. For more information, please visit the brand’s website.