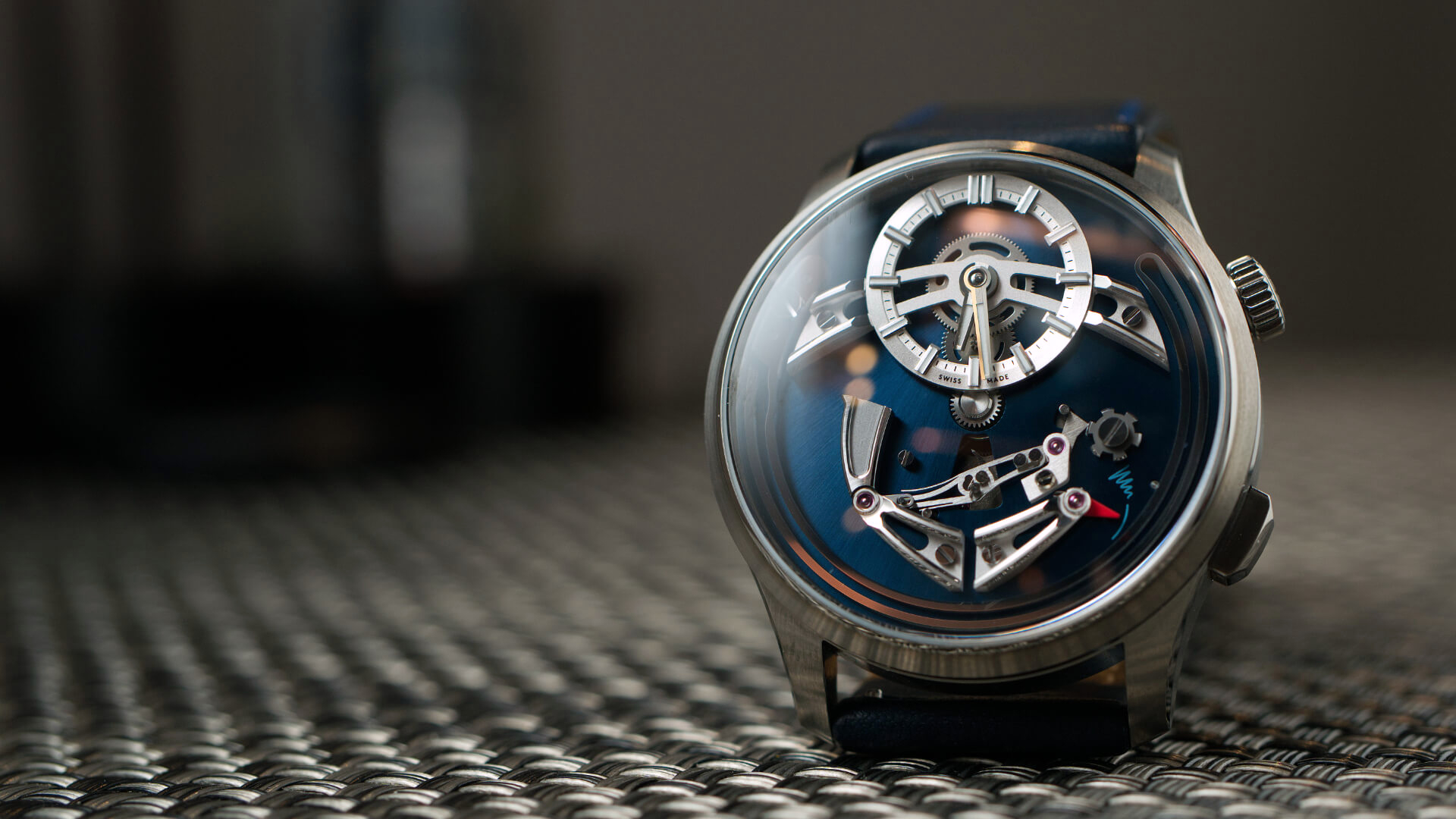 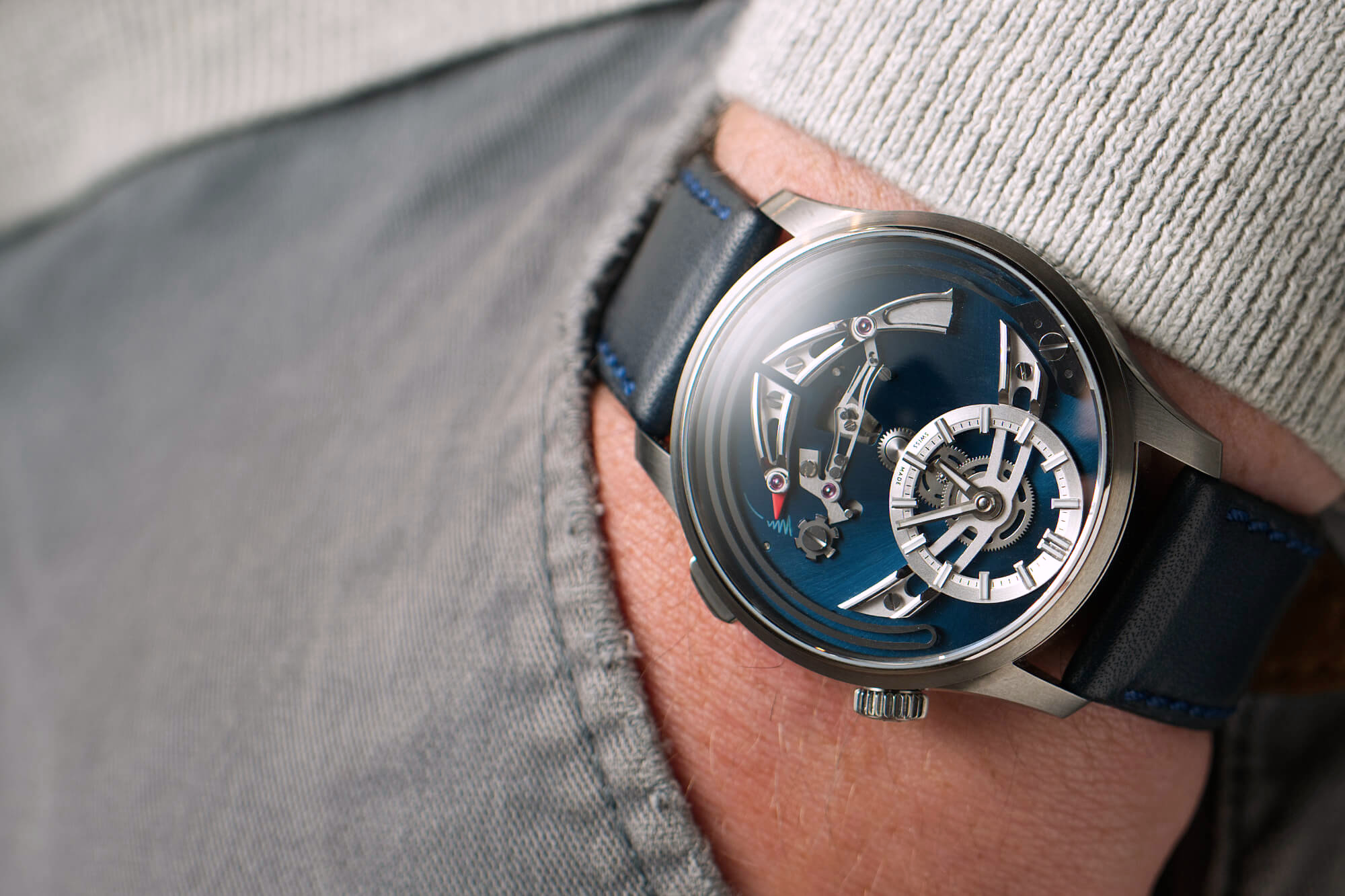 I don’t think anyone saw this coming. Sure, Christopher Ward has been dropping hit after hit, and we know it’s got its own in-house movement and has recently started getting pretty wild with skeletonized models and releases with carbon cases and dials and recessed crowns. The brand has always punched above its weight, a powerhouse at the front of the horological British Invasion that’s been evolving and improving since its founding in 2004. Gone are the days of slab-sided, uninspired dress watches; now are the days of dynamic faceted cases and sapphire dials. But no one was expecting this. No one could have seen the Christopher Ward C1 Bel Canto coming. 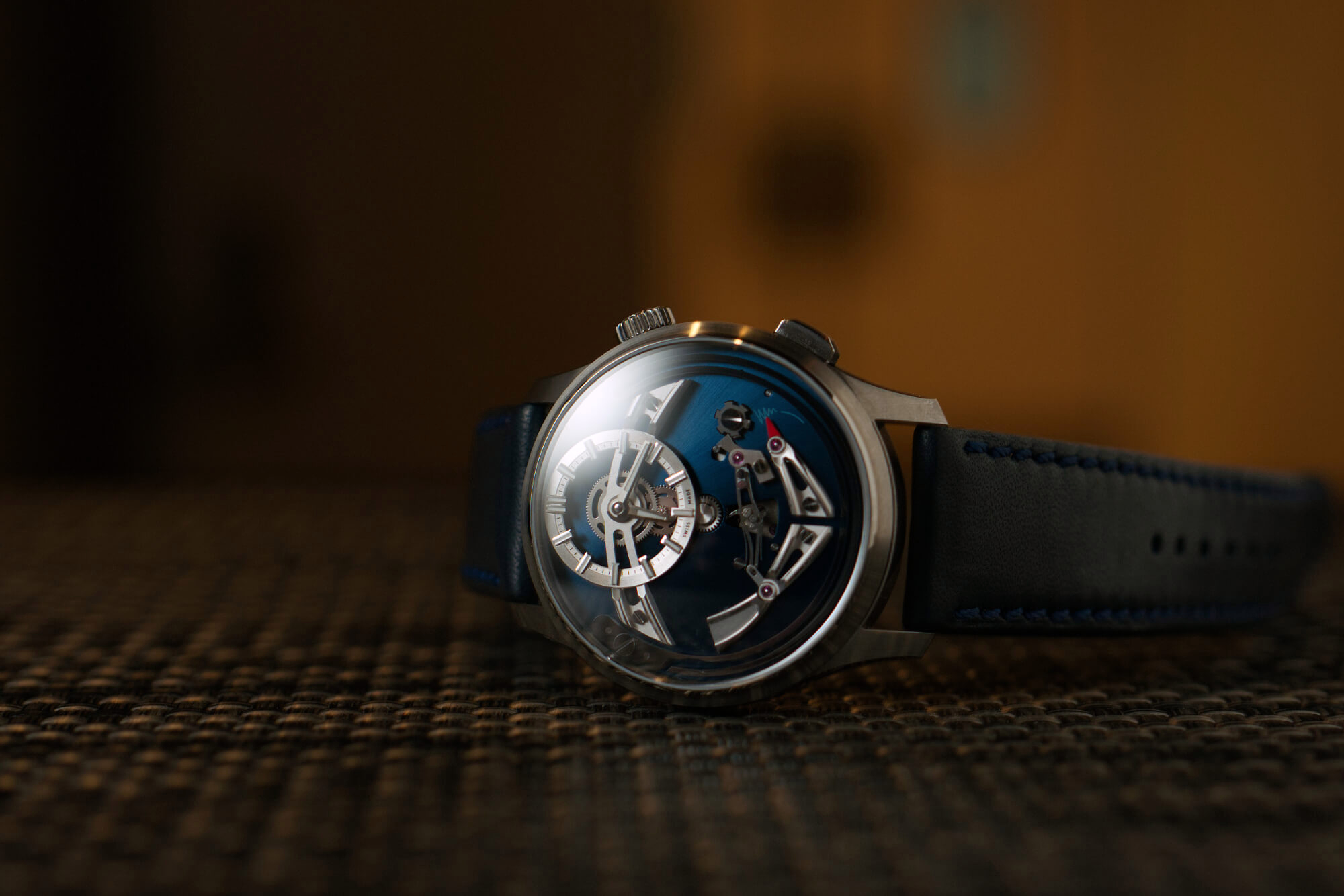 The Christopher Ward C1 Bel Canto is a passing chime timepiece: When the chime is active, the watch will emit a single chime at the top of every hour, and the mechanism is on full display for the wearer. You may be saying to yourself, “So? That’s nothing new.” Well, sure. Most high-end brands offer a minute repeater, and Omega just came out with that nifty Speedmaster Chime. Brands like MB&F and Greubel Forsey have defined themselves with their dial-side mechanics that blur the line between horology and art. But let’s face facts — of the minute repeaters we’ve covered this year, the cheapest was $285,000; that Omega is estimated around $450,000; MB&F “machines” start at $56,000; and Greubel Forseys clock in around $200,000—if you can find one. The point is that chiming watches and watches with dial-side movements are produced in low numbers at high prices, and watches that sit at the intersection of those two categories are even rarer and pricier. Christopher Ward, though, has made a name for itself by making impressive watches at reasonable prices, and the C1 Bel Canto—a chiming watch with its inner workings in full view—is priced starting at $3,595. 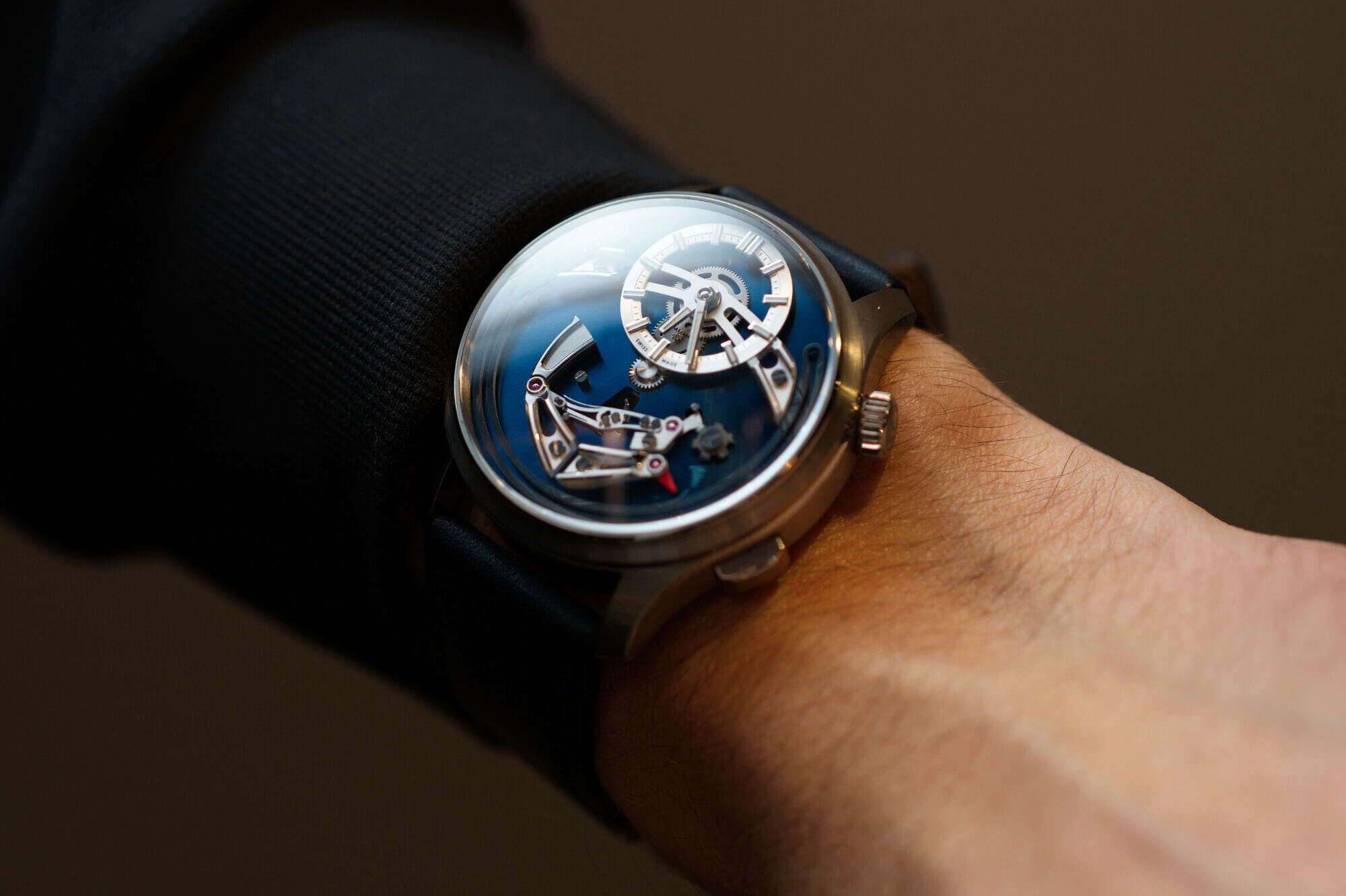 The case design is a surprise. Not for what it is, but for what it’s not. It is not the Light-catcher case that now defines the majority of Christopher Ward’s models. The 41mm grade 5 titanium case features a simpler, more refined design that, while not as engaging as its faceted peer, allows the Bel Canto dial to take center stage. That said, the case still benefits from a curved profile that makes its already accommodating 13mm thickness and 48mm lug-to-lug sit easily on the wrist. The case is brushed on the top and sides, with a thin polished chamfer tracing the outline and a polished surface at the base of the fixed bezel. The fluted pull-out crown at 2 o’clock affords an acceptable 30m of water resistance—I’m not sure why you would need more from this kind of watch—and at 4 o’clock, there’s a polished pusher, but more on that later. The screwed-on caseback is closed (which I wasn’t bothered by, given the dial display) and features a stamped soundwave motif with arced lines emanating from the center (it reminded me a bit of the Windows sound icon). 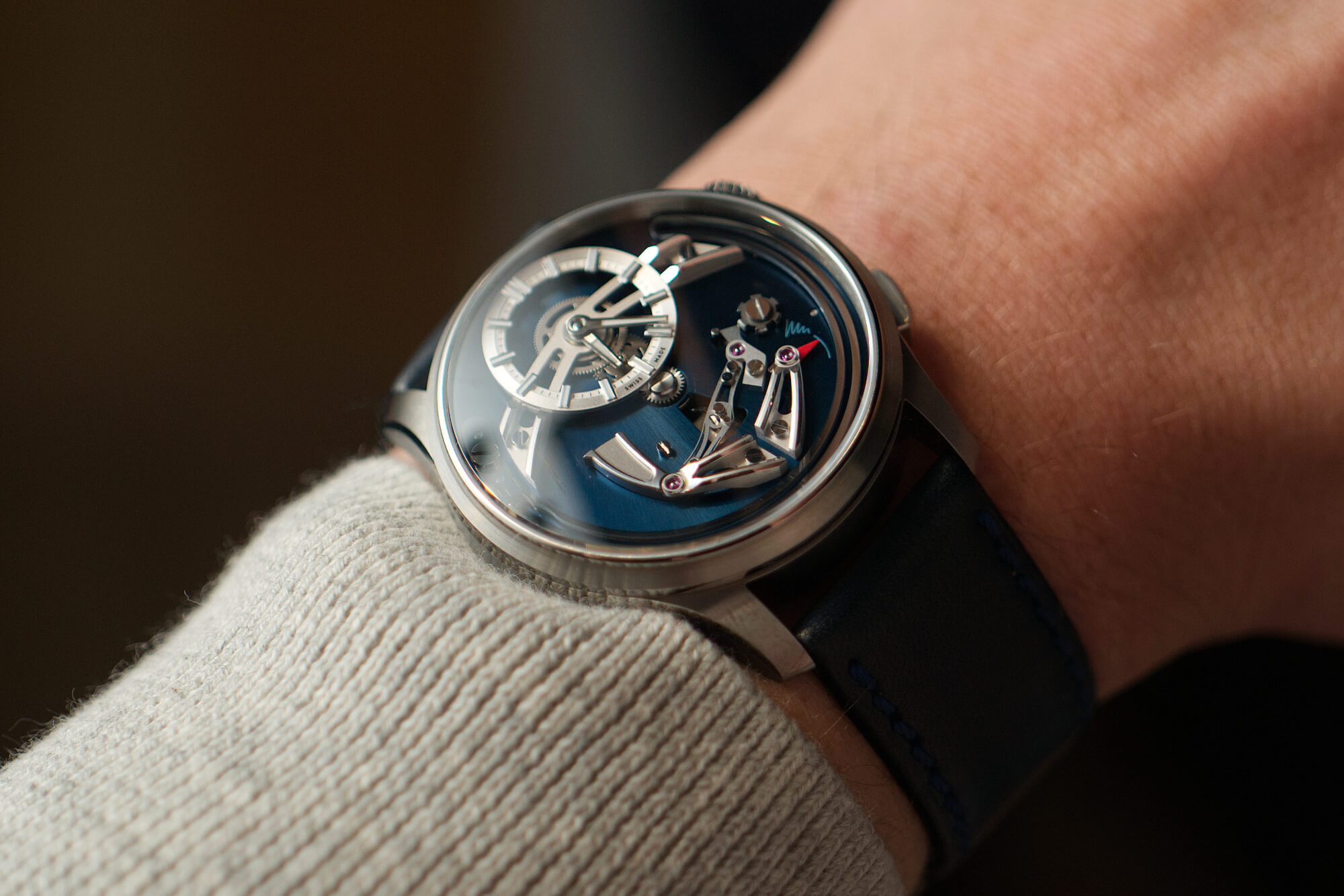 Curiously for a 41mm watch, the lugs are 22mm; this has the effect of making the case seem smaller than it is, though I’d argue that at 41mm, that isn’t entirely necessary. It’s a standard lug size, though, so who really cares? The watch is available on the leather seen here, which is soft and comfortable and features a leashed floating keeper (the keeper can’t just slide up to the lugs while on the wrist), or Christopher Ward’s new bracelet, offered for the first time in titanium and featuring screwed links, quick release tabs, and a micro-adjustable ratchet clasp. As always, I recommend buying on the bracelet, as you can customize with your own straps after the watch arrives. 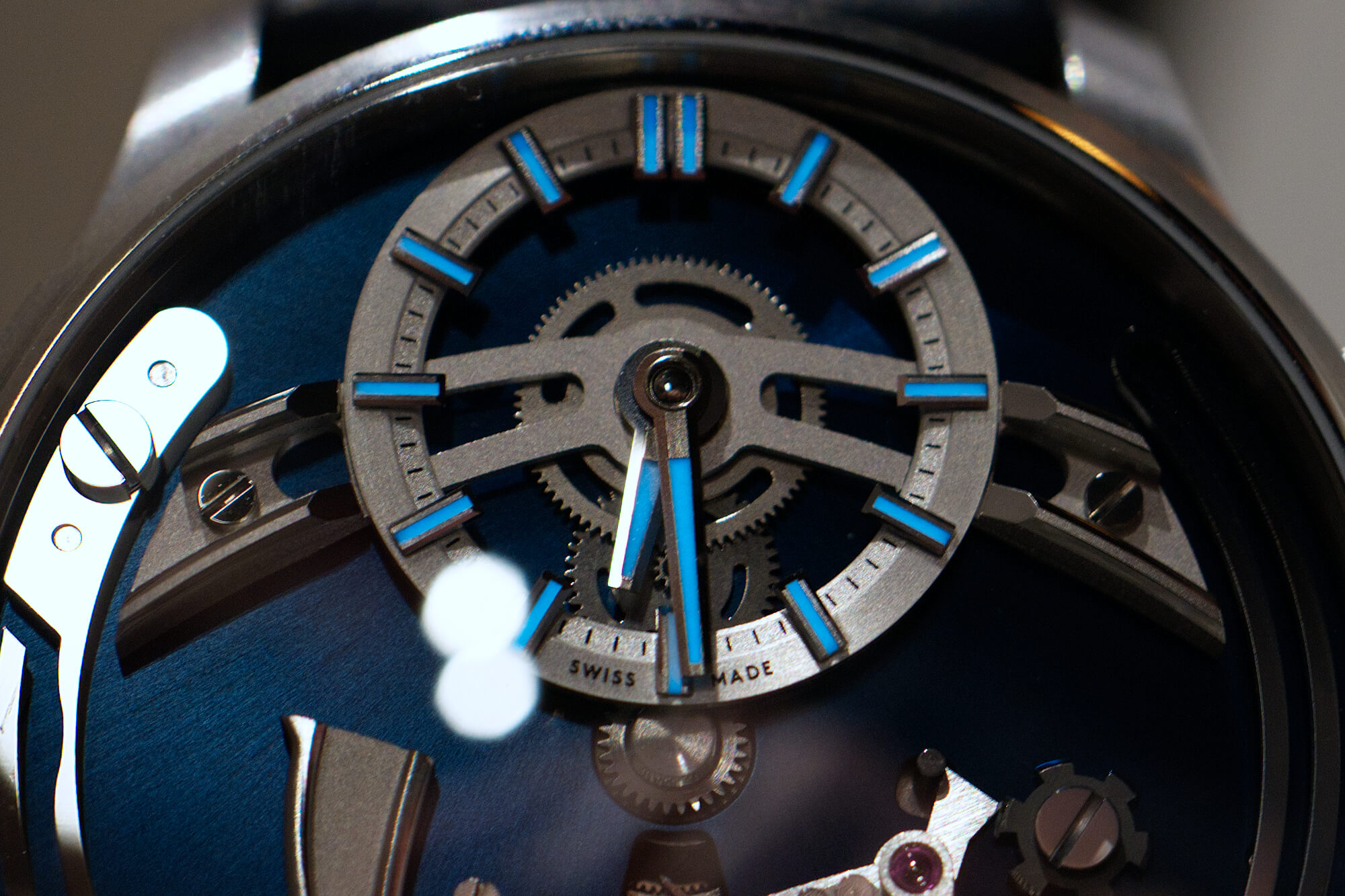 The action takes place under the domed sapphire crystal, though. The main dial features an Azzuro blue color with a sunburst finish that radiates from the floating, offset time display. The blue creates a brilliant play of light, and the shadows cast upon it by the movement add unusual shifts in color that are lacking in traditional dials. The time display is offset at 12 o’clock, suspended by a sweeping bridge that spans the dial. The display has a predominantly frosted finish and hands that blend brushed tops and polished bevels, and it’s a beauty in its own right. Admittedly, the reduced size and the steel-on-steel look don’t make for the easiest reading. One interesting decision is the use of Super-LuniNova (top grade C1, for those wondering); the style of the dial and the use of lume suggest a sportiness not typical of chiming watches, which often lean heavily toward dressy. But I think it may work here, and here’s why: The C1 Bel Canto isn’t your typical chiming watch. It’s not a $295,000 platinum timepiece. It’s an under-$4,000 chiming hour watch from a brand that’s best known for its tool and sports watches, not its dress watches. The dial design and lume create a connection to the brand’s identity that might otherwise be weak or missing. 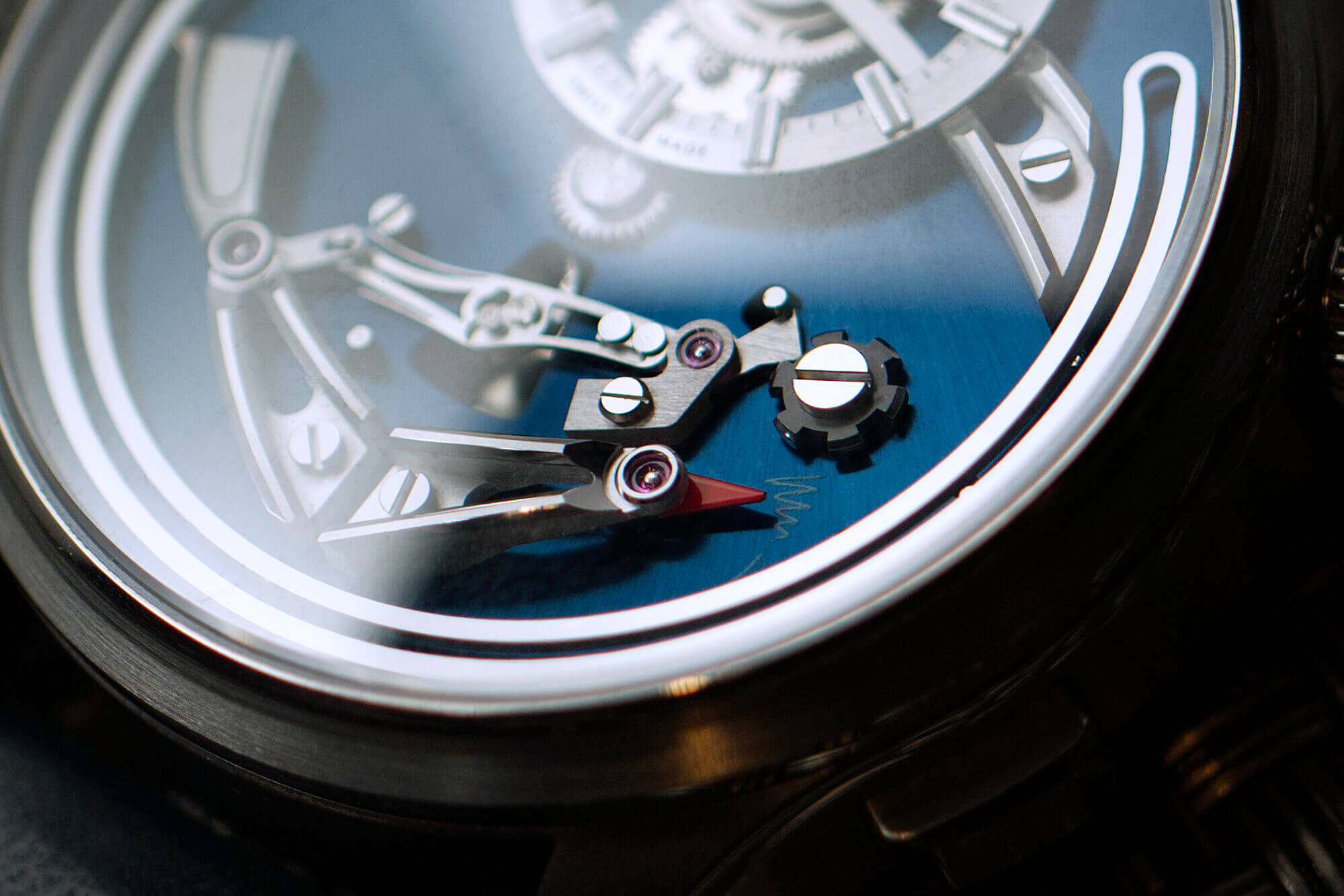 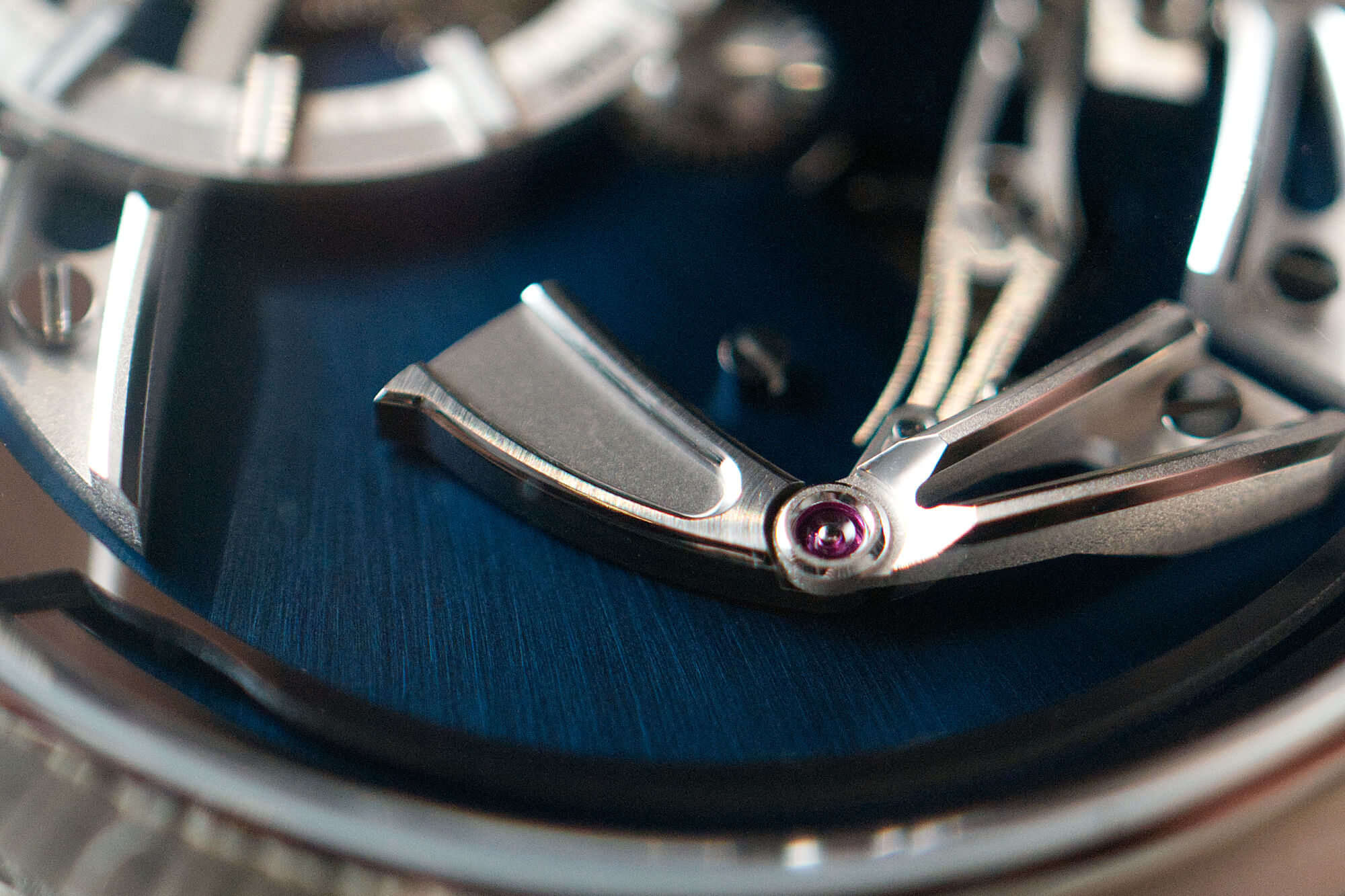 Christopher Ward collaborated with Swiss firm Chronade to design and hand-finish the dial-side components, with a blend of frosted and polished surfaces on the rhodium-plated mechanism (if you saw or were lucky enough to handle Christopher Ward’s C60 Concept, the finishing here may seem familiar, as Chronade also helped with that movement). Covering the bottom half of the dial is the entirety of the chiming mechanism, toggled by the 4 o’clock pusher. Upon activation, the mechanism snaps to attention: the program wheel at the far right rotates, the red on/off indicator flips to point at the waveform, the central arm shifts as a pawl engages the geartrain, and finally, the hammer comes into position to strike the gong that extends around the periphery from 10 to 2. Each hour, on the hour, the hammer strikes the gong; the chiming itself is a rather restrained, higher pitch ding, simply marking the hour rather than making a show of it. I’d love to hear something a bit more resonant, but at this price, I did not and do not expect the aural satisfaction of a Patek Philippe minute repeater. 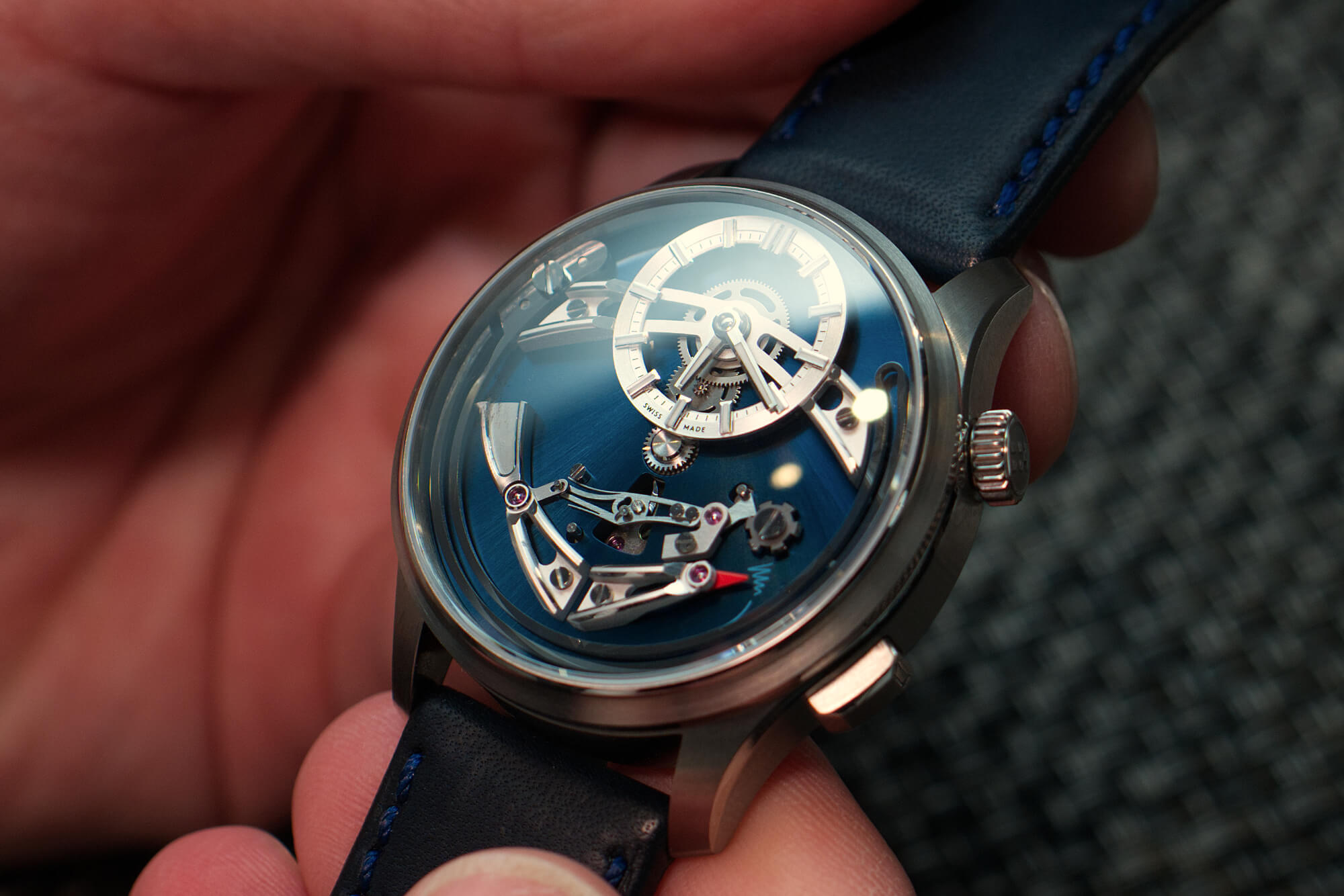 The movement itself isn’t actually so new. Christopher Ward master watchmaker Frank Seltzer realized that the brand’s jumping hour module in the JJ01 caliber—first seen in the C9 Harrison and retired for some time—could be modified and linked to a chiming mechanism to sound at the hour. 50 additional components later and the automatic Calibre FS01 was created. The movement has 29 jewels and a power reserve of 38 hours at a rate of 28,800 vph. Accuracy can be expected to be -/+ 20 seconds per day, and I’m sure leaving the chime on all the time will eat into that power reserve. 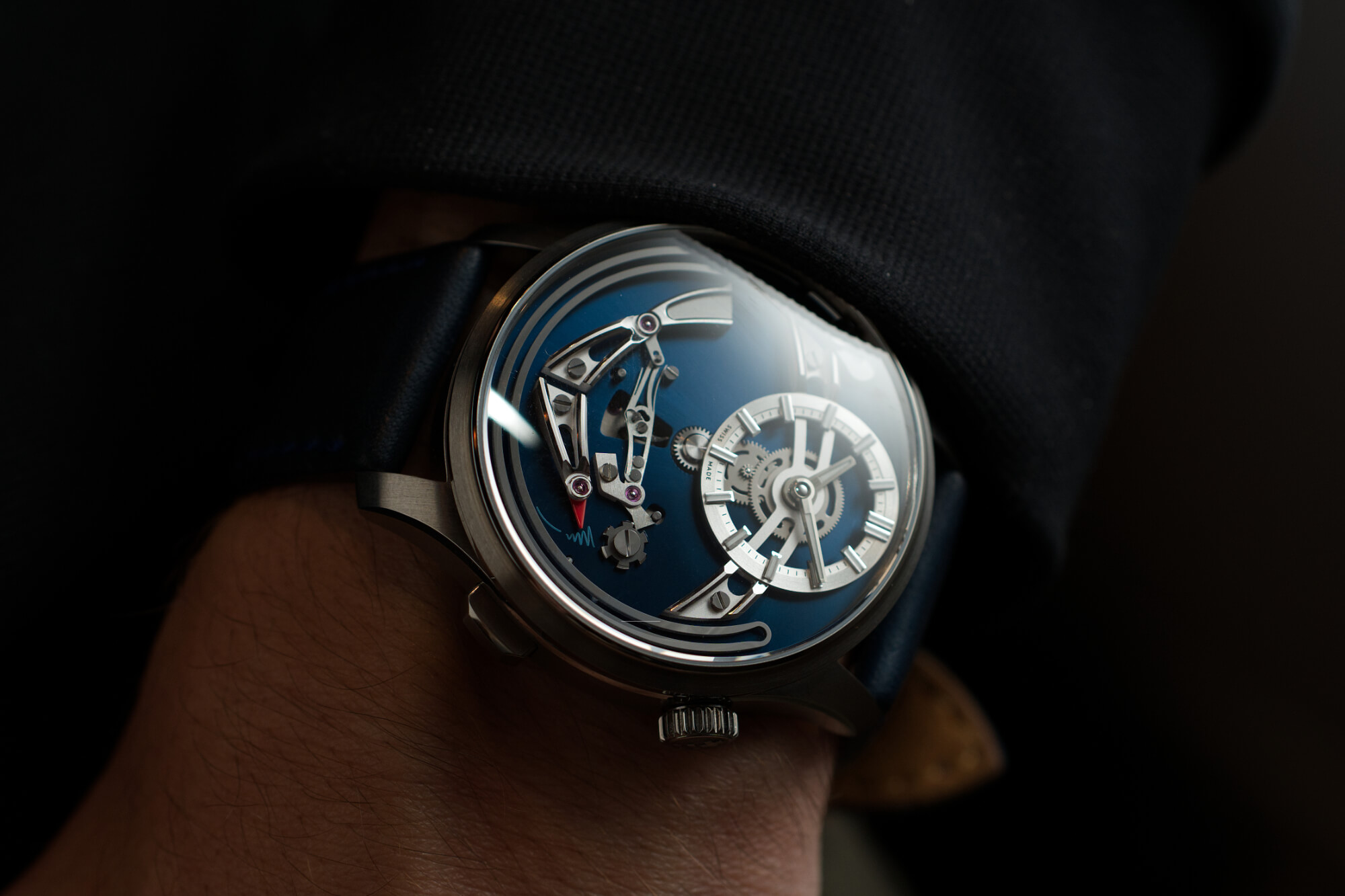 Like Christopher Ward’s C60 Concept, the C1 Bel Canto isn’t meant to herald a new direction but rather to further demonstrate the brand’s abilities as a watchmaker beyond its typical dive, military, and sports offerings. This watch is not a minute repeater, and it’s not made by Swiss elves using ancient magic. It would lose in a horological fight against a watch like the MB&F LM Sequential Evo or the H. Moser Endeavour Minute Repeater Tourbillon, but it’s also not even entering the ring. Instead, it’s offering a taste of those haute horlogerie icons at a fraction of the price, while still delivering exceptional quality. The Christopher Ward C1 Bel Canto is priced from $3,595 and limited to 300 pieces, available now directly from Christopher Ward. For more information, please visit the brand’s website.