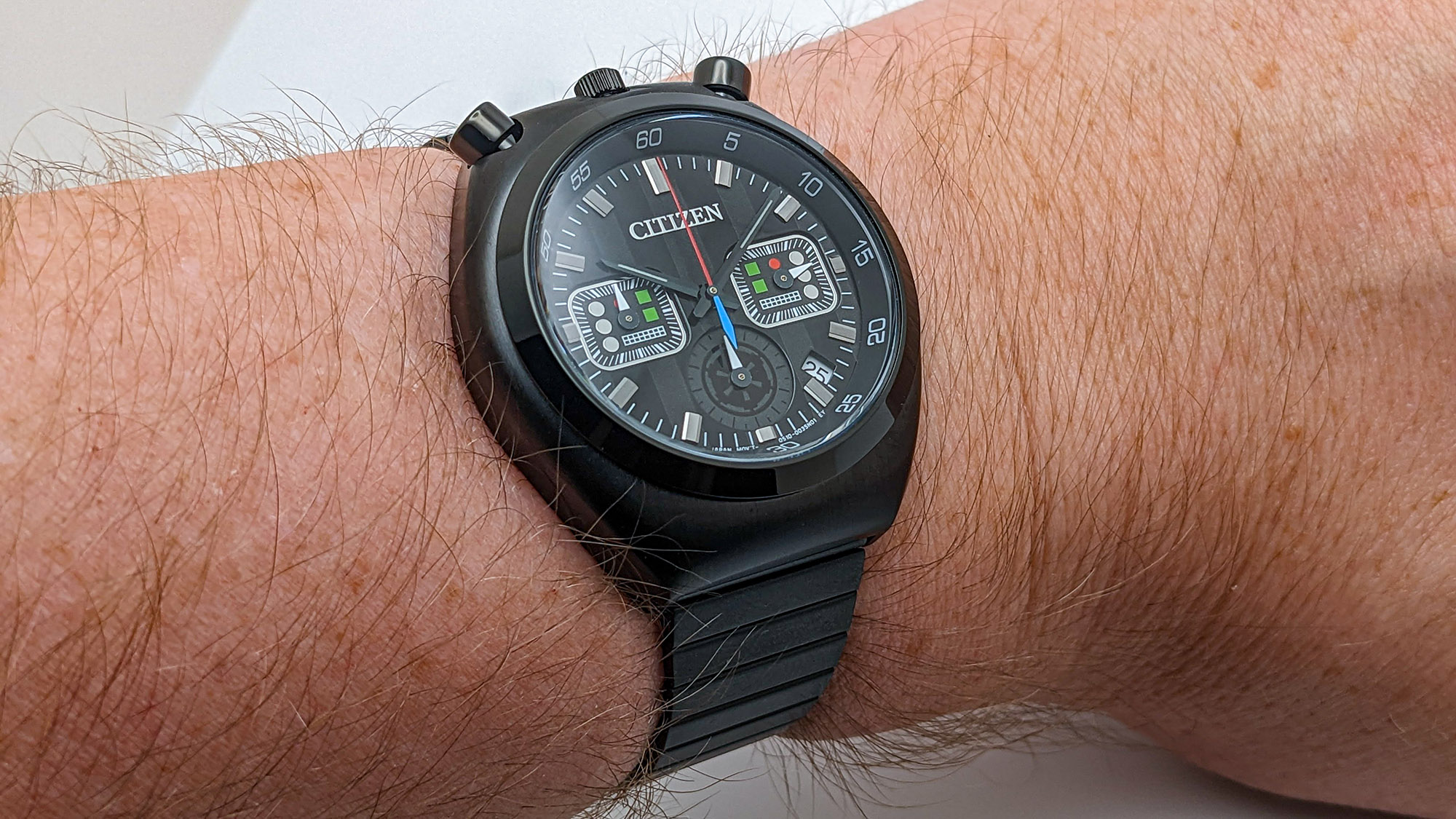 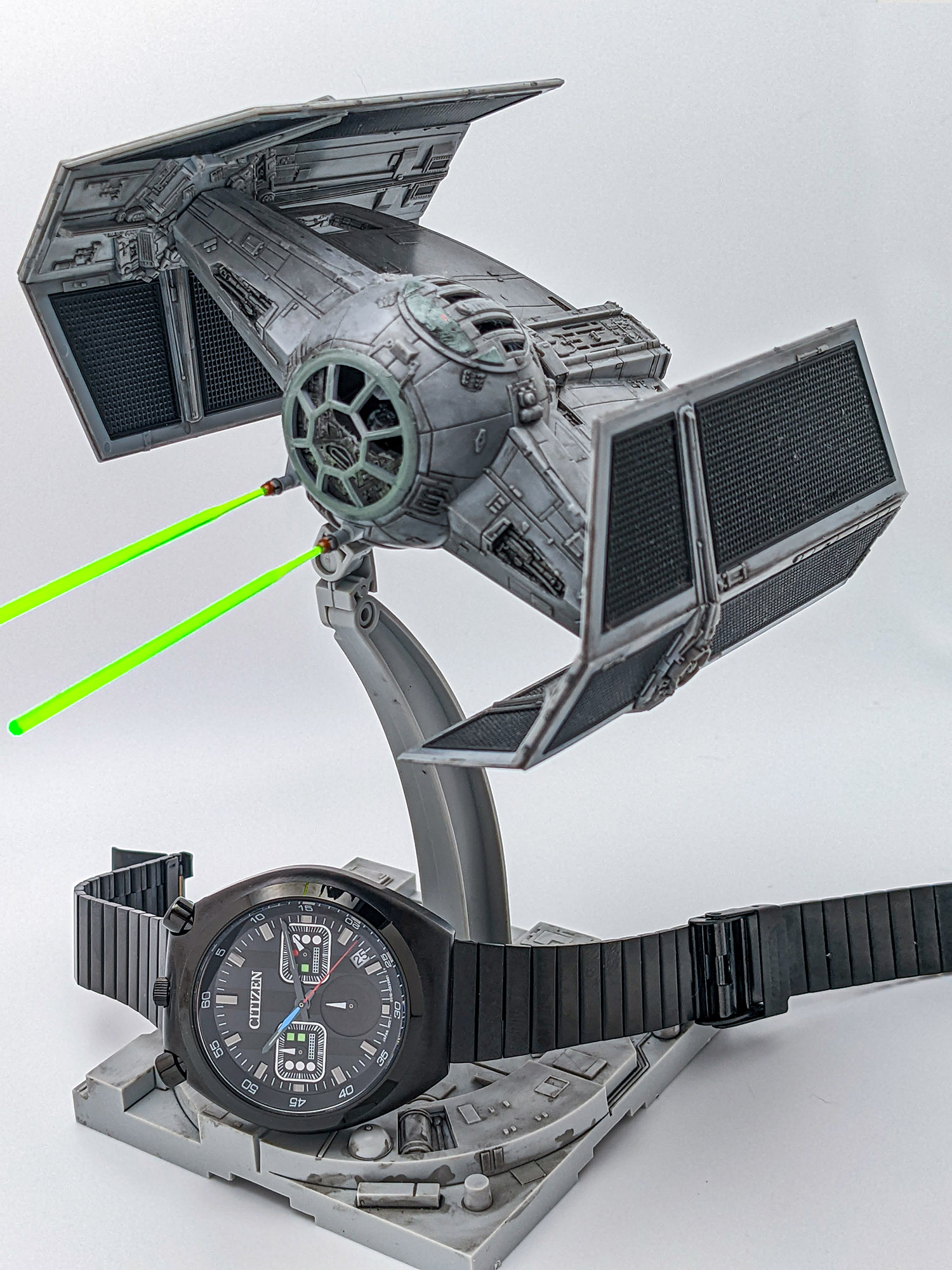 “Lord Vader, your watch is ready.” It’s a safe bet to say most enthusiasts have said this at some point or another in their lives when pointing out a properly sinister (and obviously black) timepiece design. While that sort of aggressive, dark, and futuristic look covers a lot of ground in today’s watch market, Citizen’s official licensing agreement with Lucasfilm allows the Japanese giant to take things one step further and directly reference the “Star Wars” franchise. Although this is nothing new, and the brand has produced Star Wars-themed models for years, in more recent times, the brand has shifted to supplement the traditional Mickey Mouse-style “character watch” approach with designs more directly aimed at enthusiasts — think less “character watches” and more “watches with character.” The new Citizen Tsuno Star Wars collection is a solid example of this line of thinking, blending the layout of Citizen’s classic ‘70s bullhead chronograph collection with visual cues inspired by some of the biggest characters in the sci-fi franchise. At the head of this collection sits the Citizen Tsuno Darth Vader, which blends charismatically funky ‘70s chronograph design with visual hallmarks ripped directly from Darth Vader’s iconic black costume for an eclectic, unabashedly fun, and surprisingly well-integrated overall look. 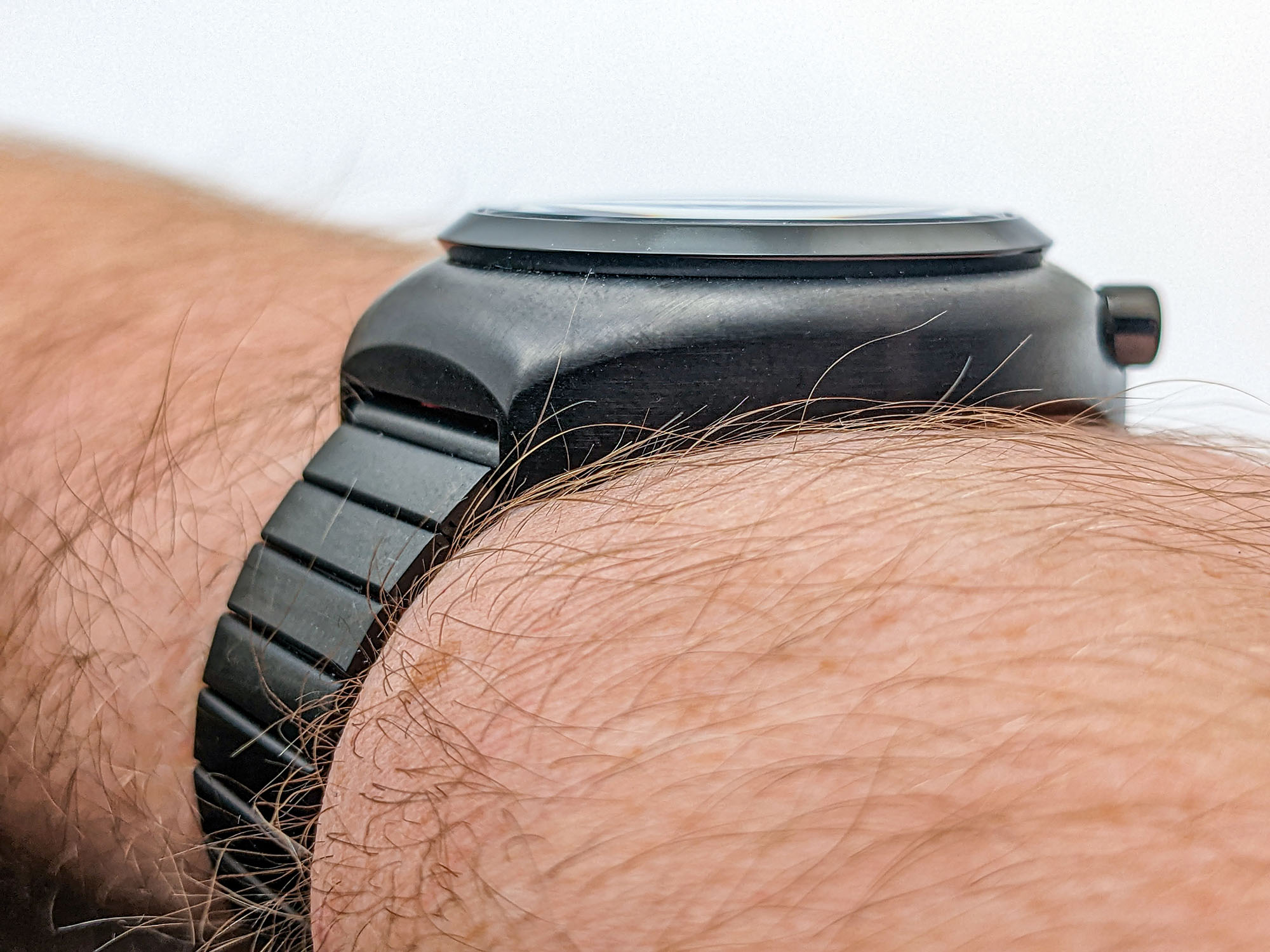 At 38mm-wide, the black ion-plated stainless steel case of the Citizen Tsuno Darth Vader cuts a remarkably compact figure on the wrist. The rounded, almost pebble-like overall shape is carried over from Citizen’s popular ‘70s-era Tsuno bullhead chronographs, and with the slimming power of black and its extremely short-hooded lugs, the Tsuno Darth Vader is adaptable for nearly any wrist size. That said, the Tsuno Darth Vader does not lack wrist presence, thanks to a relatively thick case profile and a polished sloping bezel that provides a striking contrast with the brushed main case body. Of course, the most striking feature of all is the series’ signature 12 o’clock crown, flanked by chronograph pushers at 11 o’clock and 1 o’clock. While this is a Citizen touch dating back to the same ‘70s era in which Star Wars first premiered, it also introduces just enough of an offbeat, sci-fi flavor to the design that helps it to visually integrate into the look and feel of the Star Wars galaxy. However, it’s worth noting that the overall finishing on this case is more on the simplistic side. The brushing here is light and even, with cleanly polished elements and a flat-topped mineral crystal. For the caseback, Citizen opts for a detailed engraving of Darth Vader himself in profile, which forms one of only two explicitly recognizable visual nods to “Star Wars” throughout the design. Citizen rates the watch for a somewhat underwhelming 50 meters of water resistance. 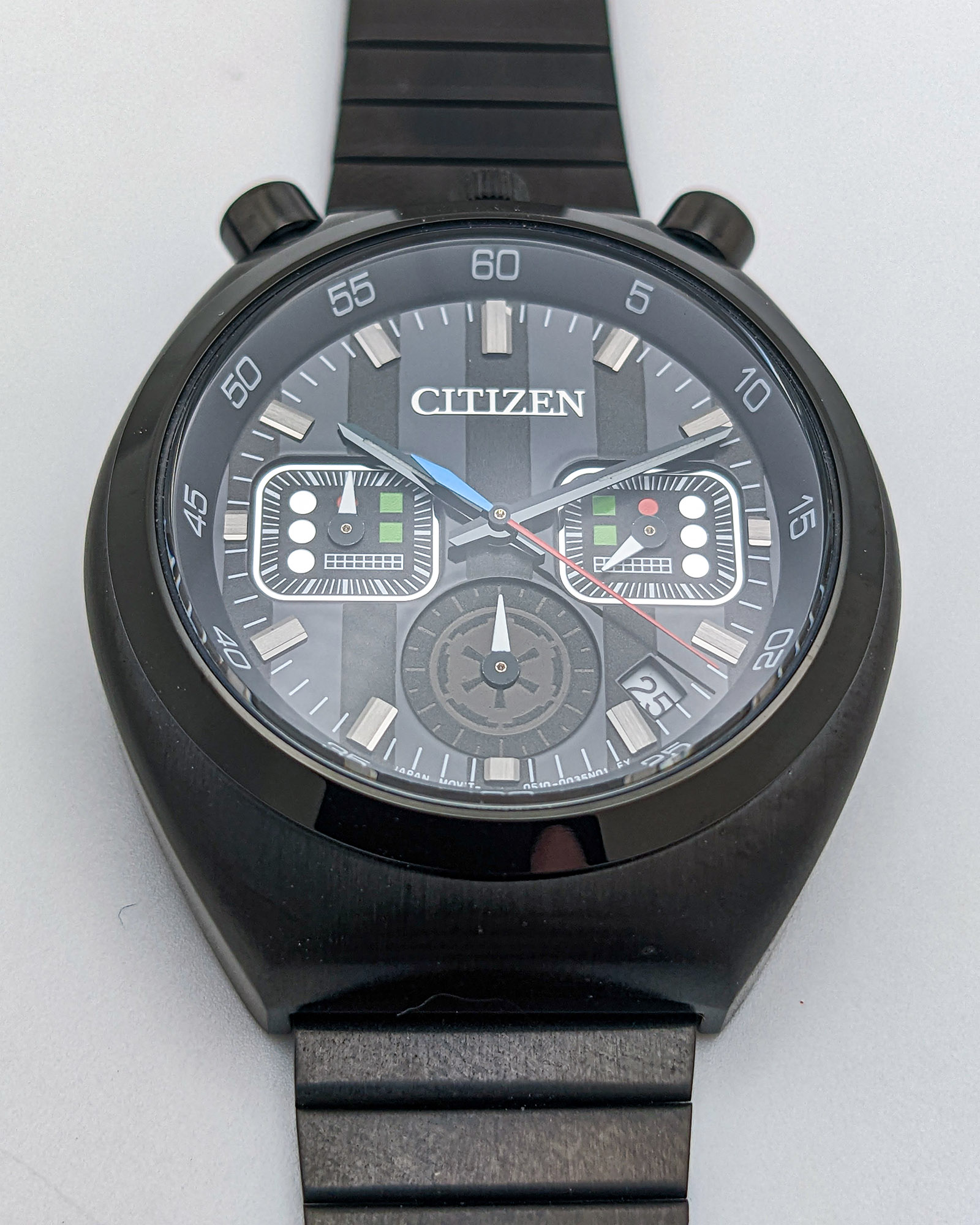 For the dial of the Tsuno Darth Vader, Citizen aims to mix the Tsuno line’s three-register chronograph layout with cues lifted directly from Darth Vader’s imposing black suit. The end result is playful, but impressively wearable, with a mostly muted color palette and stylish rectangular subdials. The main dial surface itself takes inspiration from the character’s armored mantle, with alternating vertical stripes in glossy black and matte charcoal gray that offer a dynamic look without breaking up the overall colorway. The 3 o’clock and 9 o’clock subdials (the running seconds and chronograph minutes counters, respectively) instead capture the look of Vader’s chest-mounted life support control panel. While the mix of applied polished circles, printed red and green elements, and printed grids may seem chaotic at first glance, each of these elements functions as a marker for five-second (or five-minute) intervals. This gives Citizen the chance to have its cake and eat it stylistically, bringing in stylized Star Wars visual elements while actually aiding legibility at a glance. By contrast, the chronograph hours subdial at 6 o’clock is far more subdued, with a black-on-gray printed rendition of the symbol of the franchise’s villainous Galactic Empire. Unfortunately, the main handset is also heavily subdued, and these polished black batons can be difficult to discern against the black dial surface at times. The central chronograph seconds hand has no such problem, however, with a simple and colorful design that aids both legibility and visual storytelling. The deep vibrant red used for the main length of this needle hand stands out starkly against its surroundings and harkens back to Darth Vader’s blazing red lightsaber, but the sky blue counterweight also hints toward the lingering good side still within the character. With so much thoughtful design at work here, the mismatched cutout date window at 4:30 comes off as something of an afterthought, however. 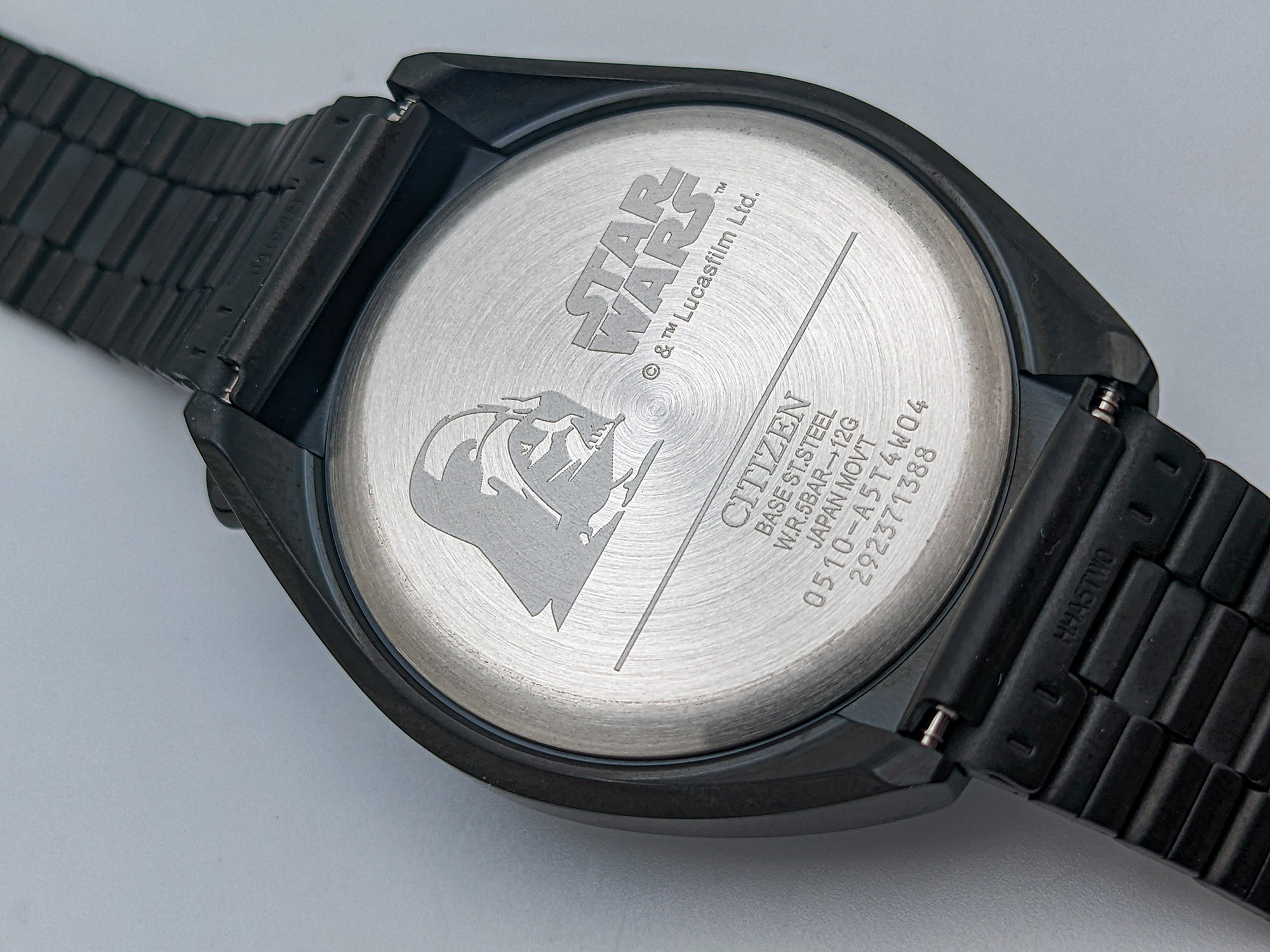 Citizen powers the Tsuno Darth Vader with its in-house 0510 quartz chronograph movement. This is a solid, affordable workhorse chronograph movement, with a respectable accuracy rating of +15/-15 seconds per month. Chronograph operation is pleasingly snappy with the 0510, with none of the mushy pusher feeling that often plagues quartz chronograph movements. To complete the sinister blacked-out look of the Tsuno Darth Vader, Citizen pairs the watch with a simple folded rectangular link bracelet in matching black ion-plated stainless steel. Like much of the rest of the design, this bracelet channels the late-‘70s/early ‘80s era that gave birth to Star Wars, but not in an entirely positive way. The folded link design, along with the simple stamped sliding clasp, is extremely lightweight, with an old-school flexible feel on the wrist that will likely divide enthusiasts. 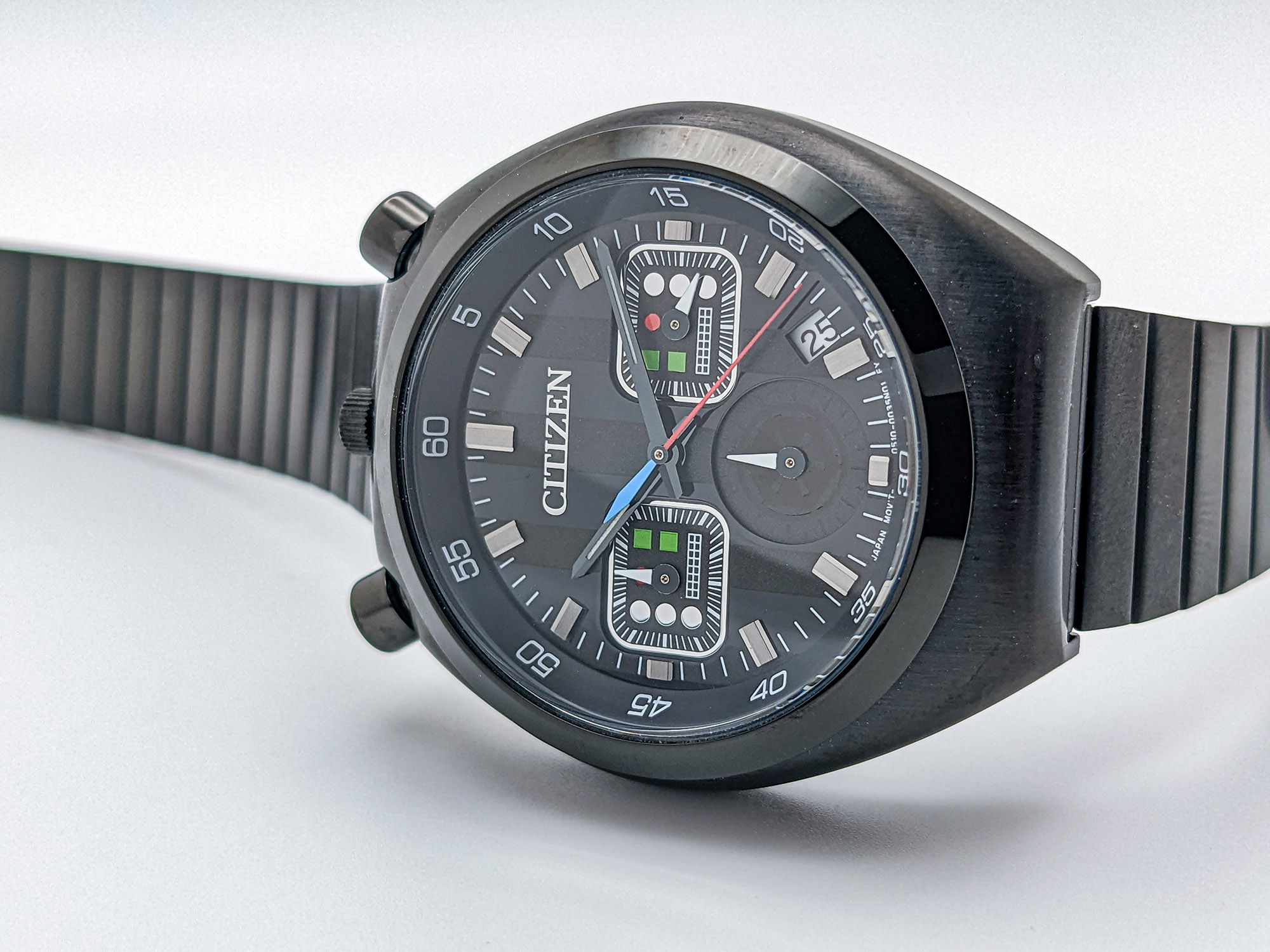