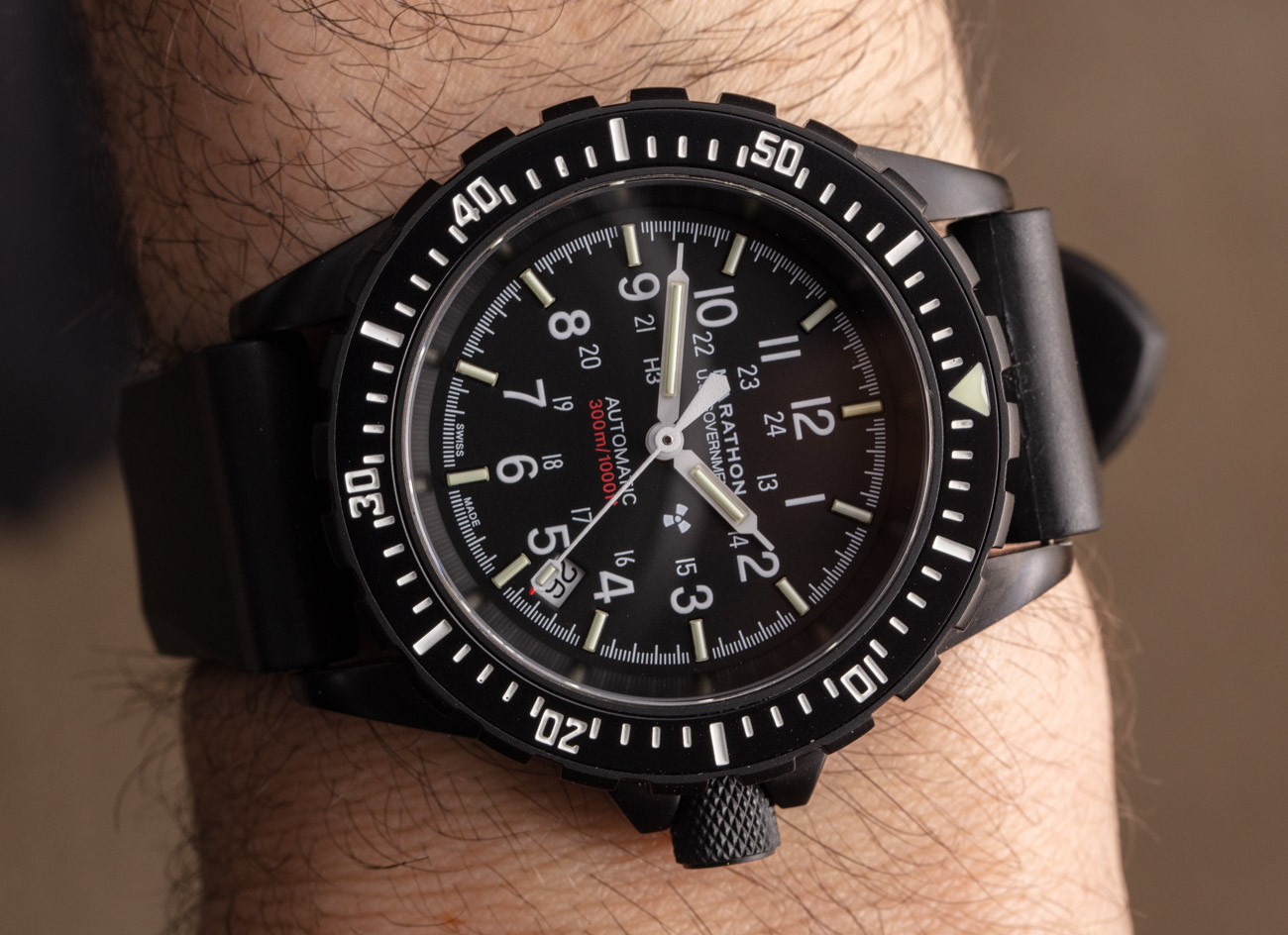 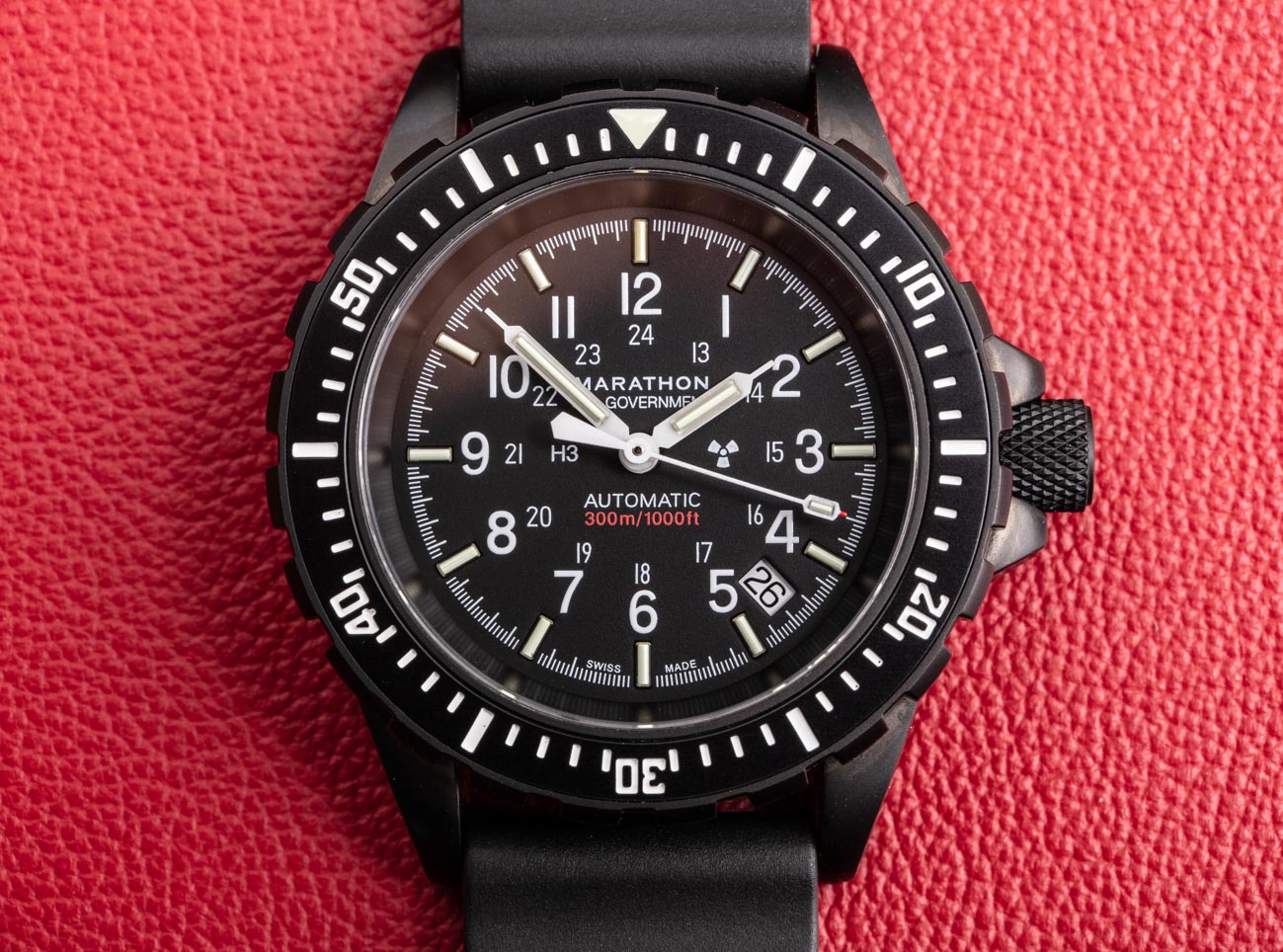 Canada’s Marathon Watch Co. currently has but one “blacked-out” watch and that is the anthracite color-coated steel large diver’s automatic “GSAR” 41mm-wide watch. I’ve personally nicknamed the this Marathon reference WW194006BK watch the “GSAR Knight Rider” because the one red line of “300m / 100ft” text reminds me of the bouncing red light on the otherwise black “KITT” modified Pontiac Trans Am featured in the 1980s TV series called Knight Rider. The General Search & Rescue (GSAR) watch by Marathon is a fantastic tool-style watch that is noteworthy for being a rare modern timepiece that is still officially issued to various government active professionals (including some elite soldiers). That also implies the watch meets military standards for durability and functionality.

Most GSAR watches look the same as the Anthracite PVD-coated model, save for the black coloring on the case components including the case, bezel, and crown. Watch lovers have known for years that a mere color change can, in many instances, remarkably alter the personality of a watch. In all black, the 41mm-wide GSAR actually feels a bit larger simply because the dial appears larger. This is due to an optical effect caused by the inner wall of the dial being in black to match the black dial, versus in steel-tone. Similarly, the bezel appears larger because there is a seamless visual integration between the bezel itself and the black-colored insert. 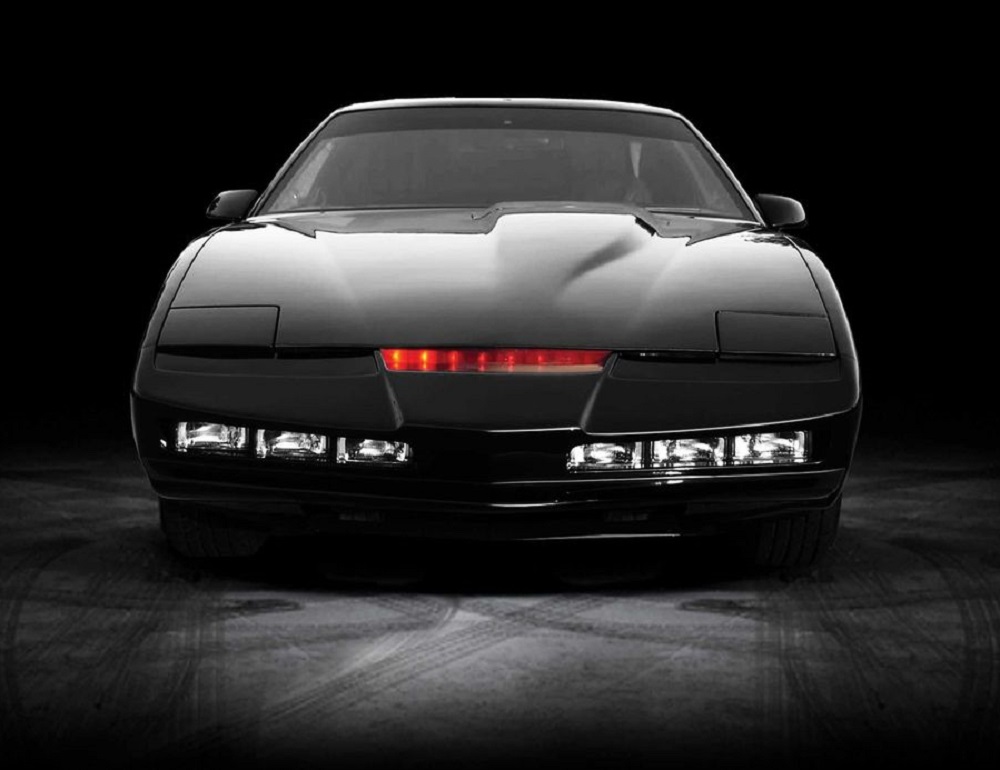 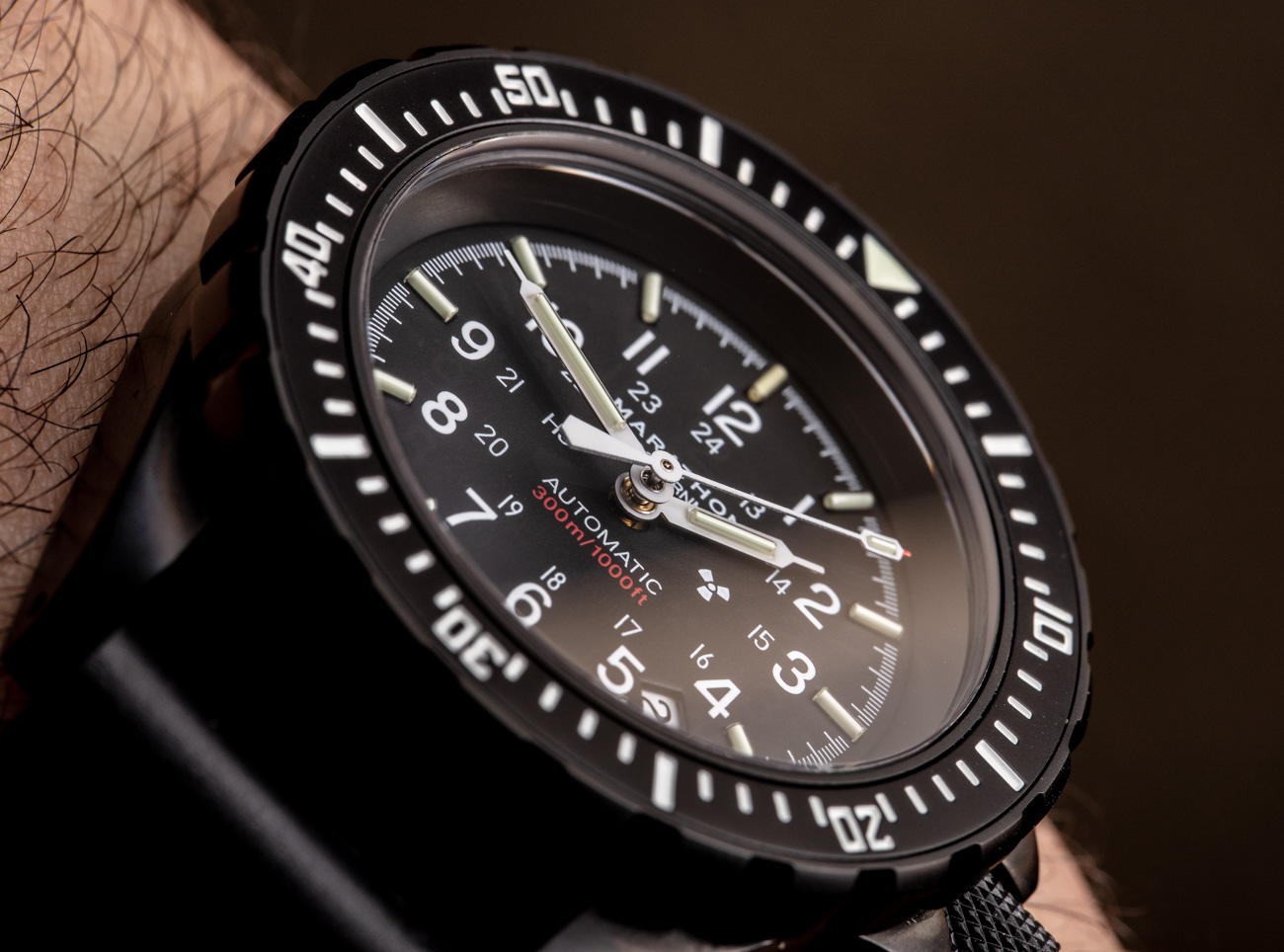 In black, the Marathon Anthracite GSAR takes on a different personality. See, for example, my aBlogtoWatch review of the Marathon GSAR “Grey Maple” watch here. Not all GSAR watches are printed with “U.S. Government” on the dial, but this WW19006BK is one of them — which is just fine to me, as KITT was a pretty darn American car. Featuring David Hasselhoff as the lead character, Michael, KITT was an oddly prescient semi-autonomous car that is probably just waiting for a body kit to put on top of a modern-day Tesla Model S.

When I first started to wear the Anthracite GSAR, I felt that the design was beautiful, functional, and a little bit Darth Vader-esque. But it doesn’t feel like the bad guy’s watch, even though the timepiece does have a sinister “tactical gear” vibe to it at times. No, the watch is more a celebration of durable tools and the sometimes-wild things people do while using them. Nothing celebrated that concept more than the entertainment car culture of the 1980s. Speaking of Star Wars, if you watch the video clip above, when David Hasselhoff’s Michael character first sits in KITT’s seat, he muses that it “looks like Darth Vader’s toilet.” So, I wasn’t all that far off in my association.

Produced at Marathon’s own manufacture in La Chaux-de-Fonds, Switzerland, the GSAR is powered by a Swiss Made Sellita automatic movement (that I believe is produced with some unique elements just for Marathon). The case is 41mm-wide, 14mm-thick, and has a roughly 48mm lug-to-lug distance. It wears smaller with 20mm-wide lugs but doesn’t feel small given the case thickness and tall bezel (which has become a signature Marathon watch look). As a sport/professional watch, the GSAR has a sapphire crystal, is water-resistant to 300 meters, and uses self-illuminating tritium gas tubes for darkness illumination on the hands and hour markers. 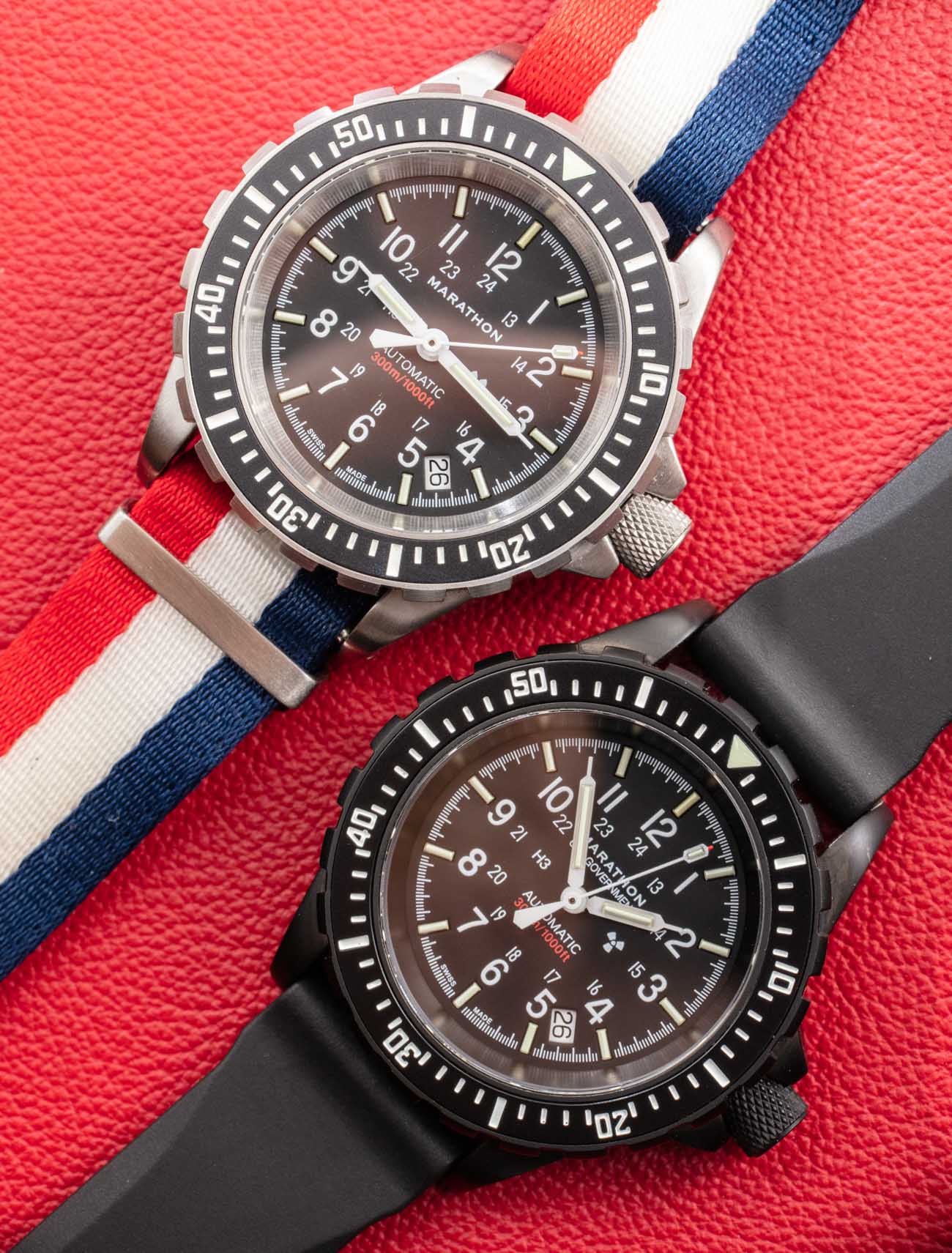 What makes the GSAR so legible as a tool timepiece is the depth of the dial, as well as the lack of reflective elements. The depth is a side-effect of the space needed for all the gas tubes, but it also helps the watch have a really functional appeal that has made General Search & Rescue models so popular for the brand. The watch also has some traditional luminant material (such as on the bezel) for added visibility in dark conditions.

Technically speaking, the GSAR is a diver-style watch, but that doesn’t mean you can only wear it if you are going to get wet. As all watch lovers know, mechanical dive watches are probably the most versatile type of contemporary watch around. What Marathon will probably start to do is offer more of its watches in the black-coated variety, but it won’t happen overnight. 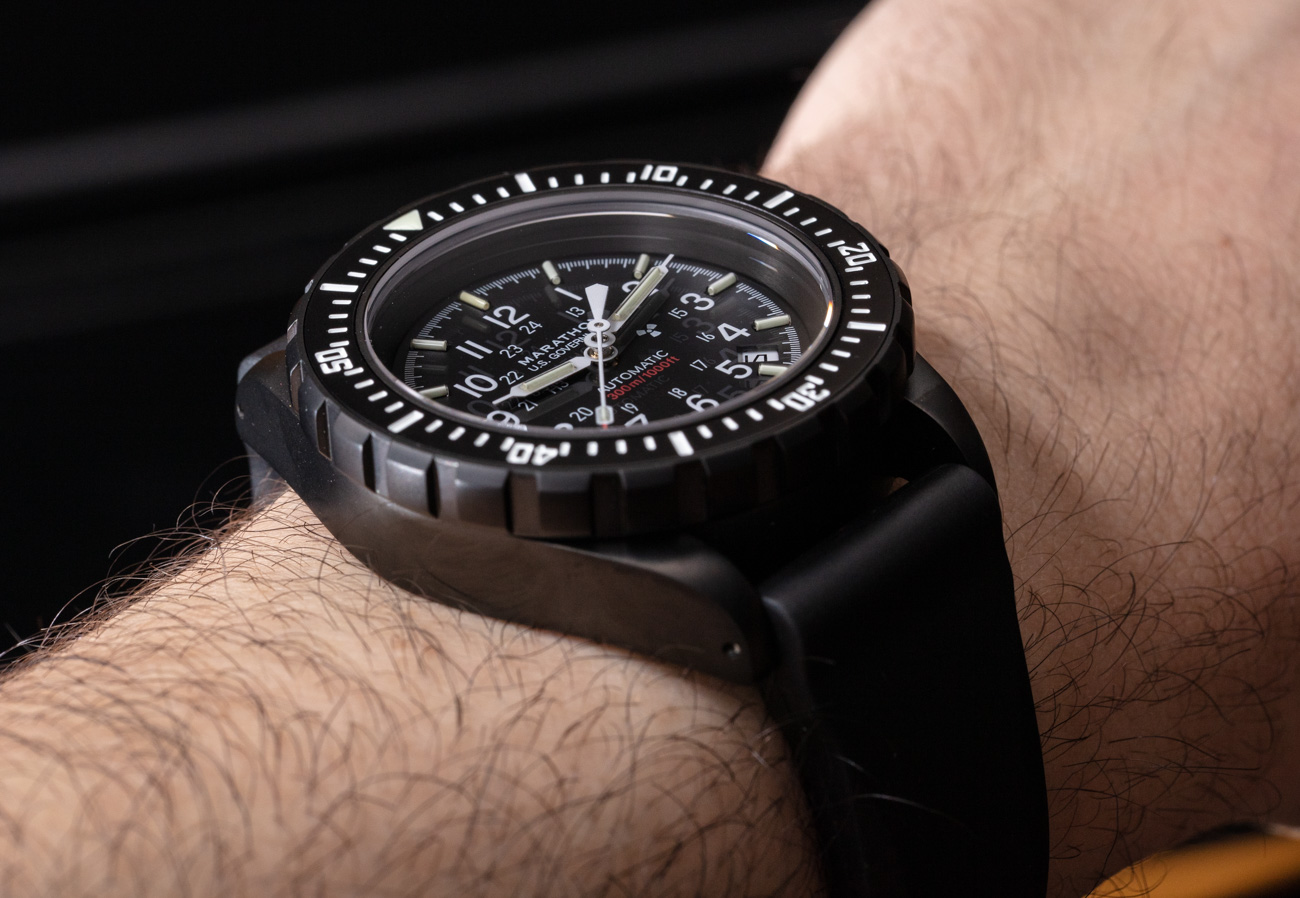 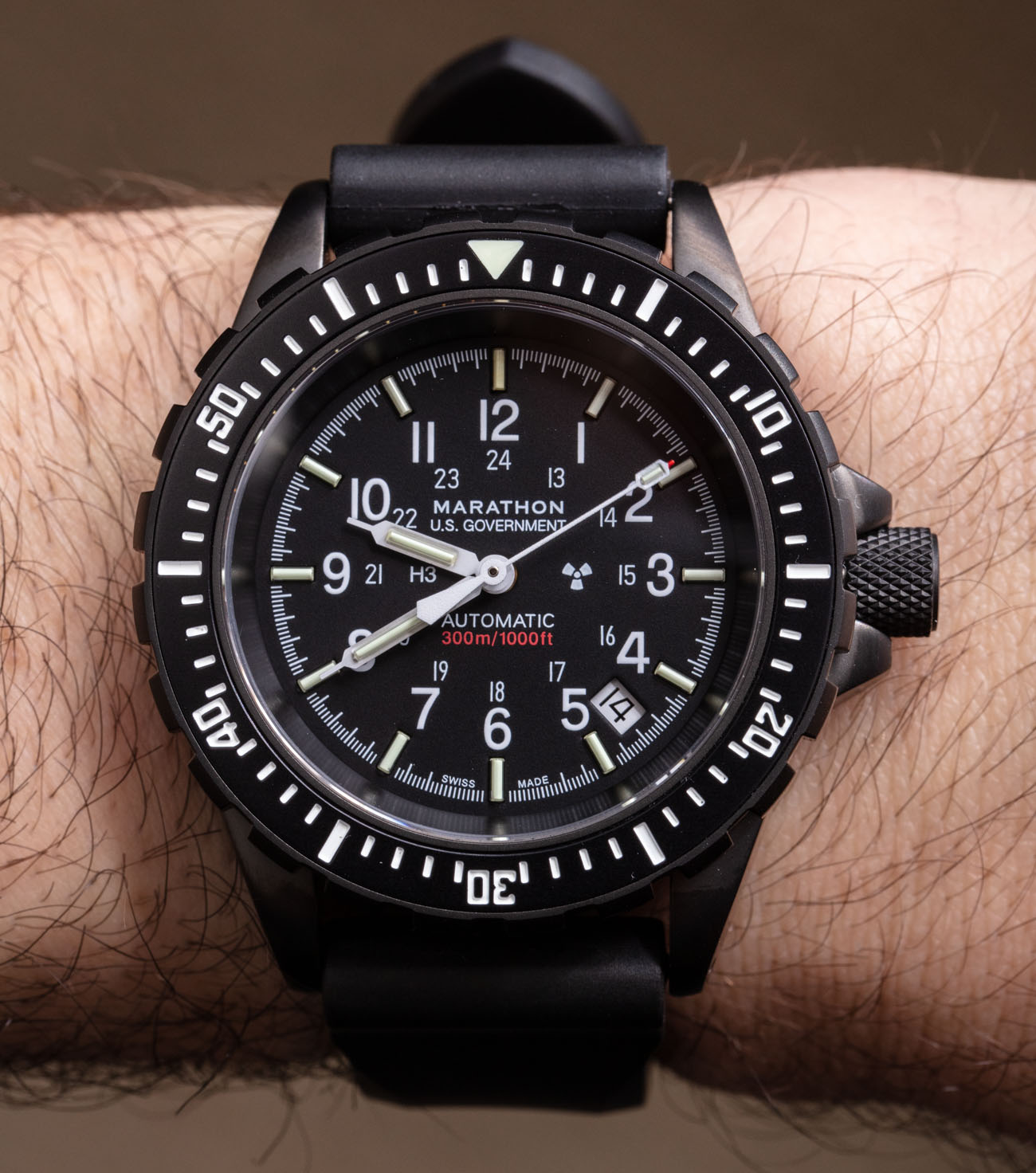 According to Marathon, in order to get just the right type of consist, durable black-coating application, they needed to go through many rounds of experimentation. “Pain in the ass” was thrown around a few times when describing what it took to achieve a black color application that met Marathon’s high standards. For that reason, a matching black-coated steel bracelet is not yet available, though I believe it may be coming. That will make the GSAR Knight Rider look all the more appealing.

Even though the rubber strap supplied with the watch is of decent quality, it lacks the personality of the watch itself. A wise move for consumers of this WW194006BK watch is to live with it for a few months and then decide what 20mm-wide strap to put on this next. There are a lot of interesting options for a really versatile watch. Price for the Marathon reference WW194006BK Anthracite Large Diver’s Automatic (GSAR) US Government 41mm watch is $1,500 USD. Learn more at the Marathon website here.