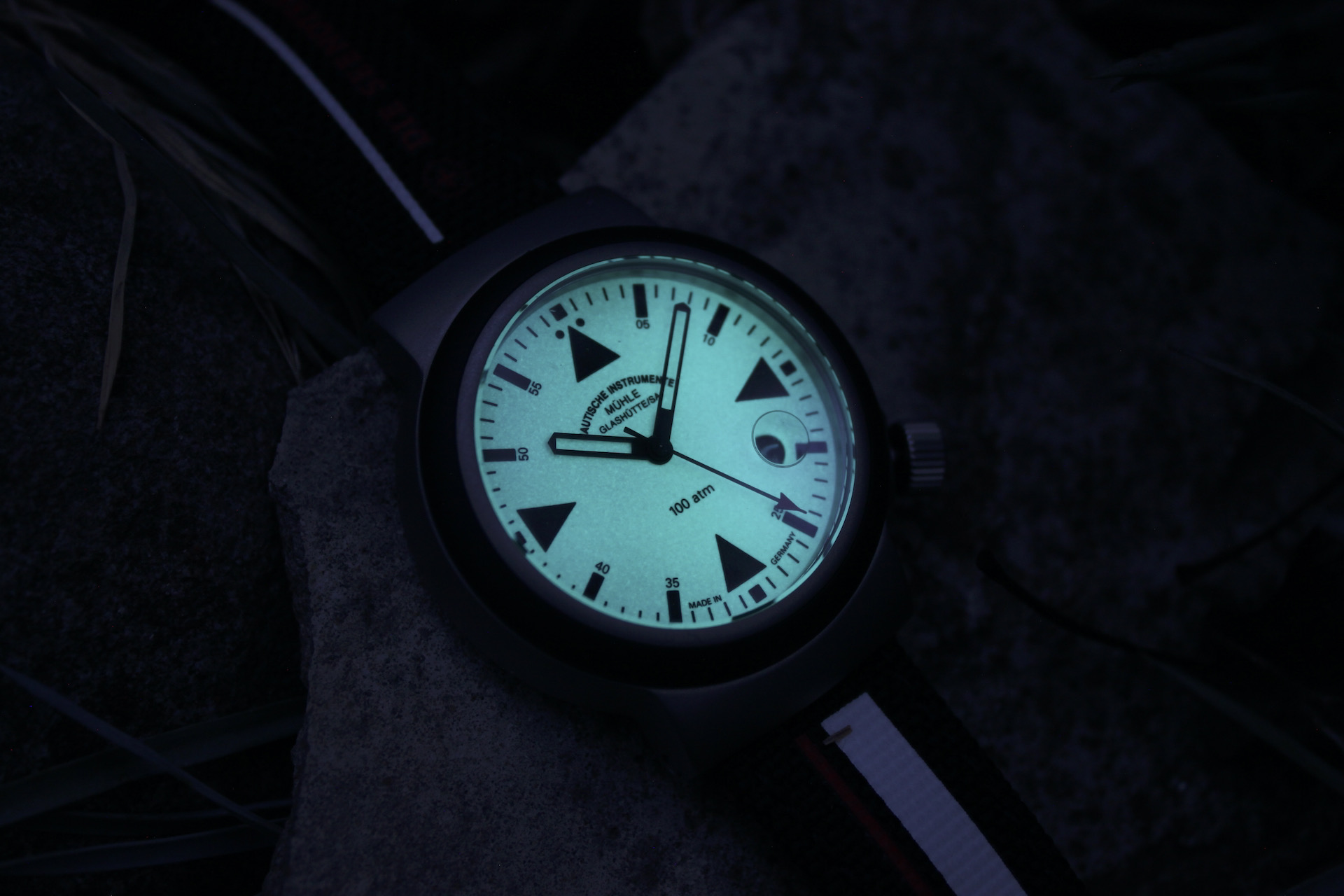 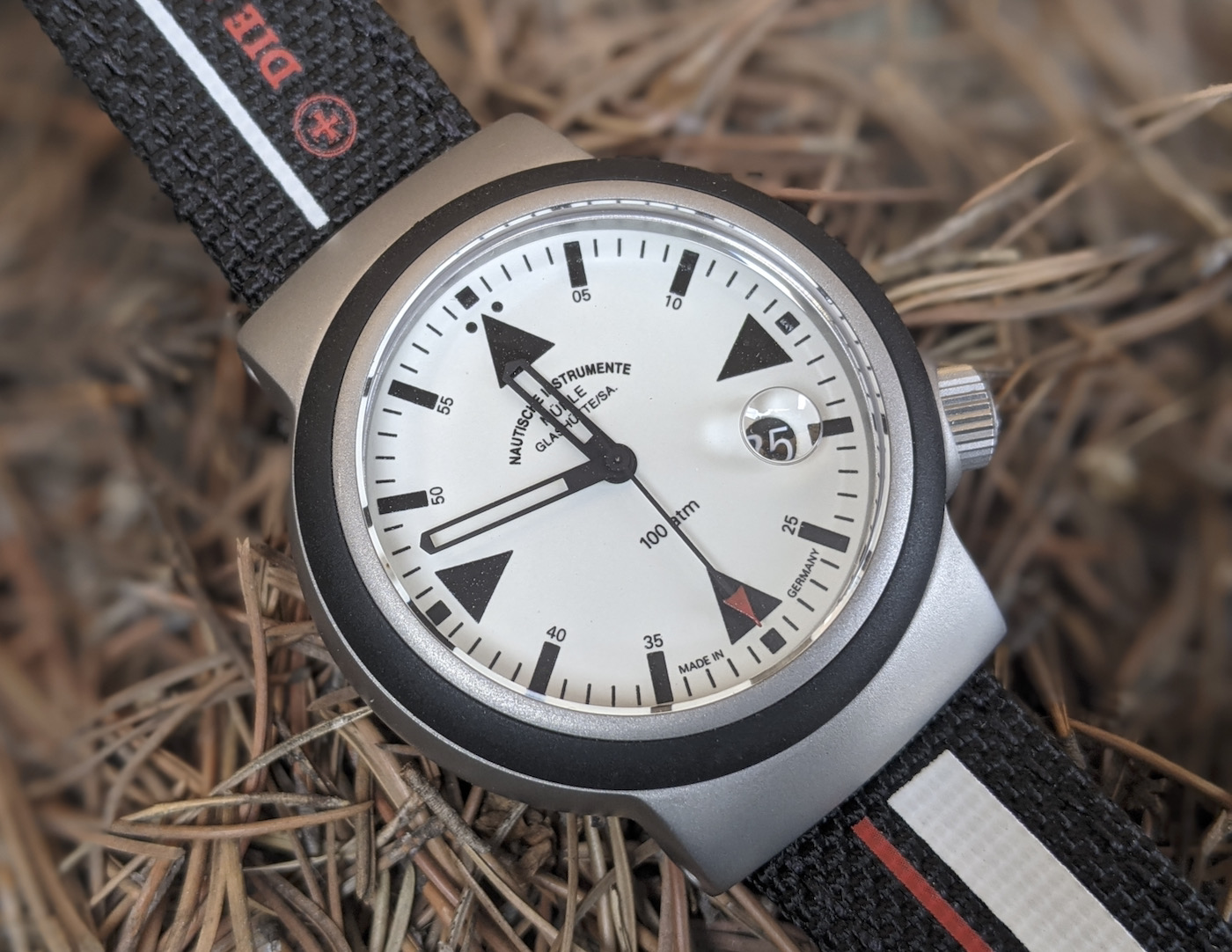 The S.A.R. Rescue-Timer is a mainstay in Mühle Glashütte’s collection of incredibly functional and robust watches, purpose-built for the German Maritime Search and Rescue Association (DGzRS). And while most of us will never need a watch to stand up to the rigors of a rescue operation in the tumultuous North Sea, it’s always nice to know you’re wearing a watch that will stand up to much, much more than you’ll ever need it to. The original S.A.R. Rescue-Timer, which was produced in collaboration with the DGzRS, came with a black dial and oversized luminous markers. With its newest iteration of the now-classic S.A.R. Rescue-Timer, Mühle Glashütte has flipped the script with a fully lumed dial set off by oversized black markers and skeletonized black hands. 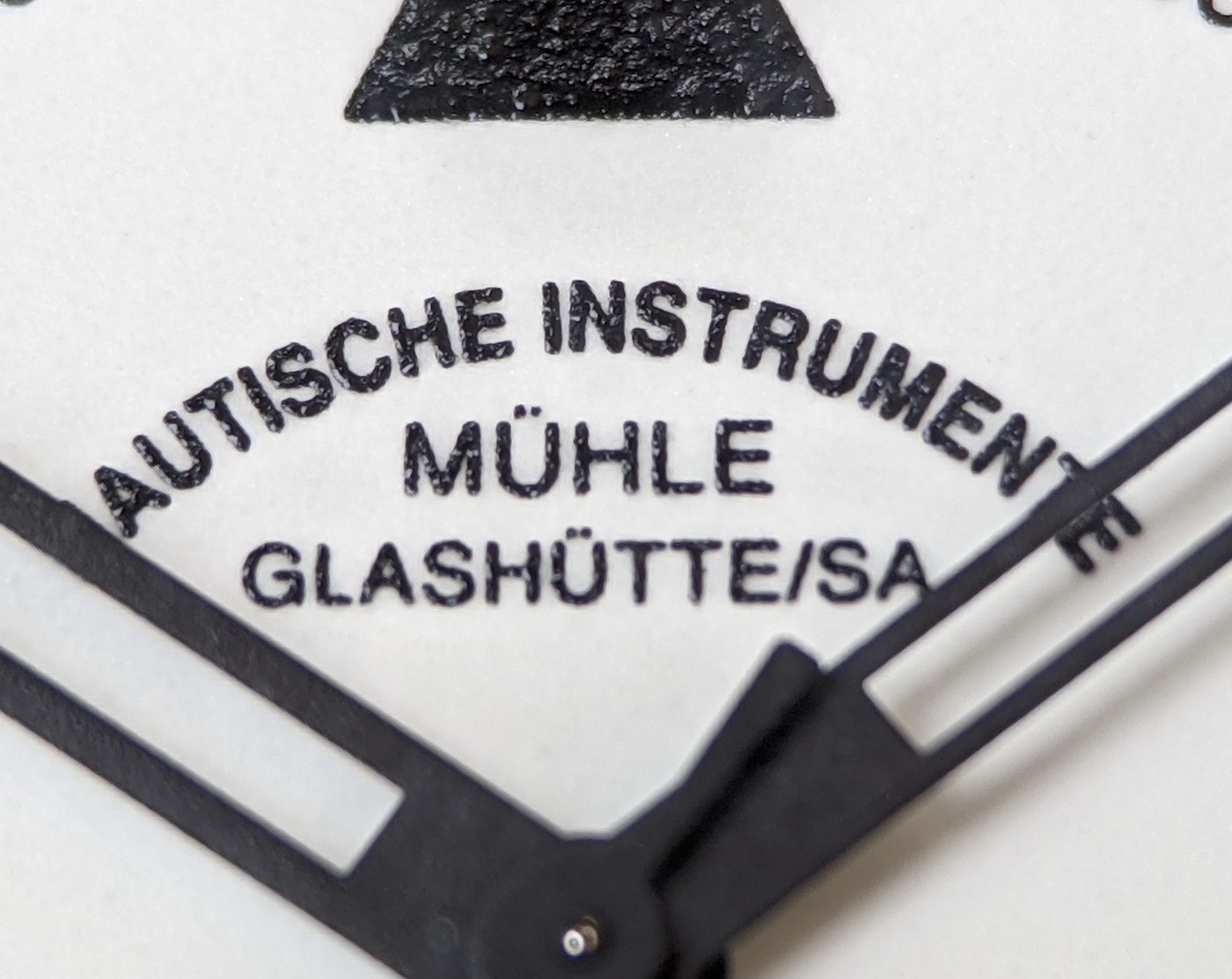 With a watch like the S.A.R. Rescue-Timer, it’s hard to pinpoint the most distinctive feature – is it the über-legible monochromatic dial or the distinctive case shape with hooded lugs and rubberized bezel? Tough call, but I’ll start with the case as it’s really unlike anything else out there. Built from stainless steel, the S.A.R. Rescue-Timer measures in at 42mm; however, that measurement is a bit deceptive. The case tapers from the caseback to the crystal (rather than having straight, slab sides), so on the wrist, the watch appears visibly smaller than 42mm. This effect is compounded by the black rubberized bezel framing the dial. Add in a 20mm strap and the effect is a watch that wears smaller and more comfortably than its dimensions would suggest. 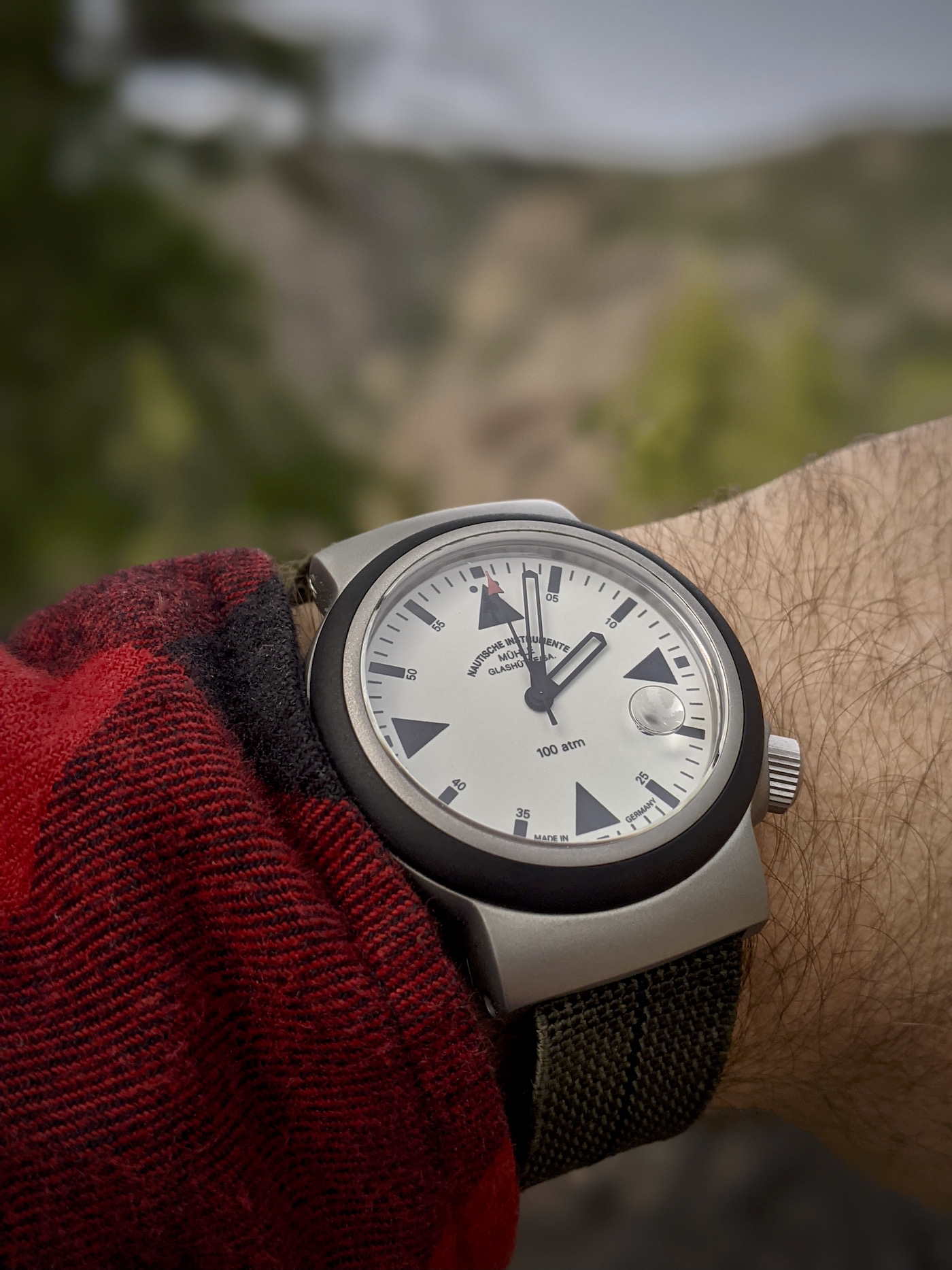 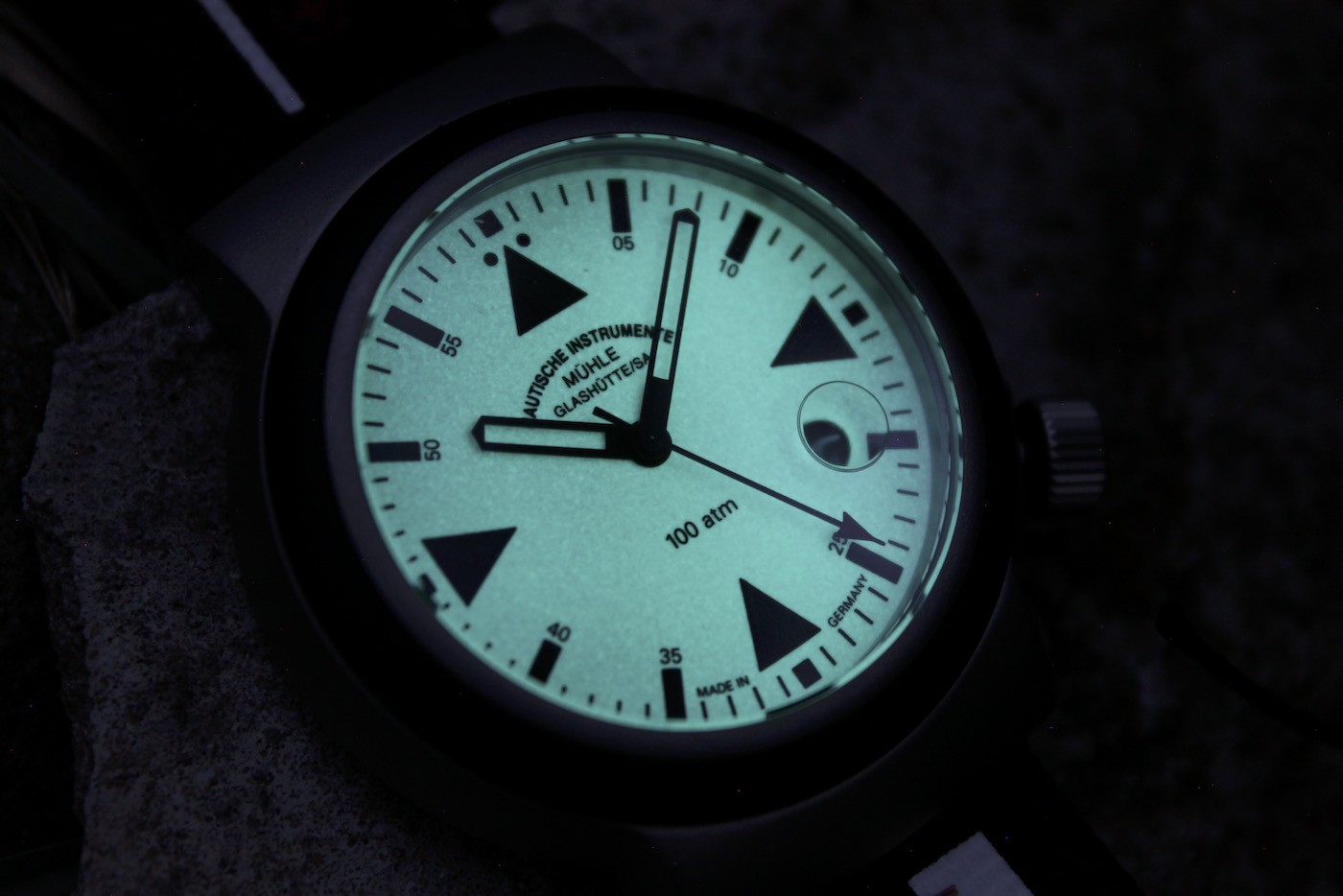 As with any good tool, form is derived from function. So, to appreciate why the S.A.R. Rescue-Timer looks the way it does, you need to consider why the watch was made in the first place. The S.A.R. Rescue-Timer was produced to suit the needs of the German Maritime Search and Rescue Association, an organization that has 60 cruisers and boats patrolling North Sea with personnel specially trained for maritime rescue missions. When the DGzRs collaborated with Mühle Glashütte in the development of the watch, they had specific requirements that needed to be fulfilled. High water resistance called for a 4mm-thick crystal and 1000m of water resistance; shock resistance required rubberized bezel; avoiding spring bar failure was achieved by employing hooded lugs and screw bars; and, to keep the watch from catching on material or injuring people being rescued, the watch needed soft lines and smooth surfaces throughout the case and the crown tucked away at 4 o’clock. In other words, the aesthetics of the watch are derived almost entirely from functional considerations. Whether those resonate with you or not is another matter. Personally, I’m a huge fan of well-made tools whether on my wrist or in my workshop, so I certainly appreciate the consideration that went into each element of this watch, and they make me appreciate the unique look all the more. 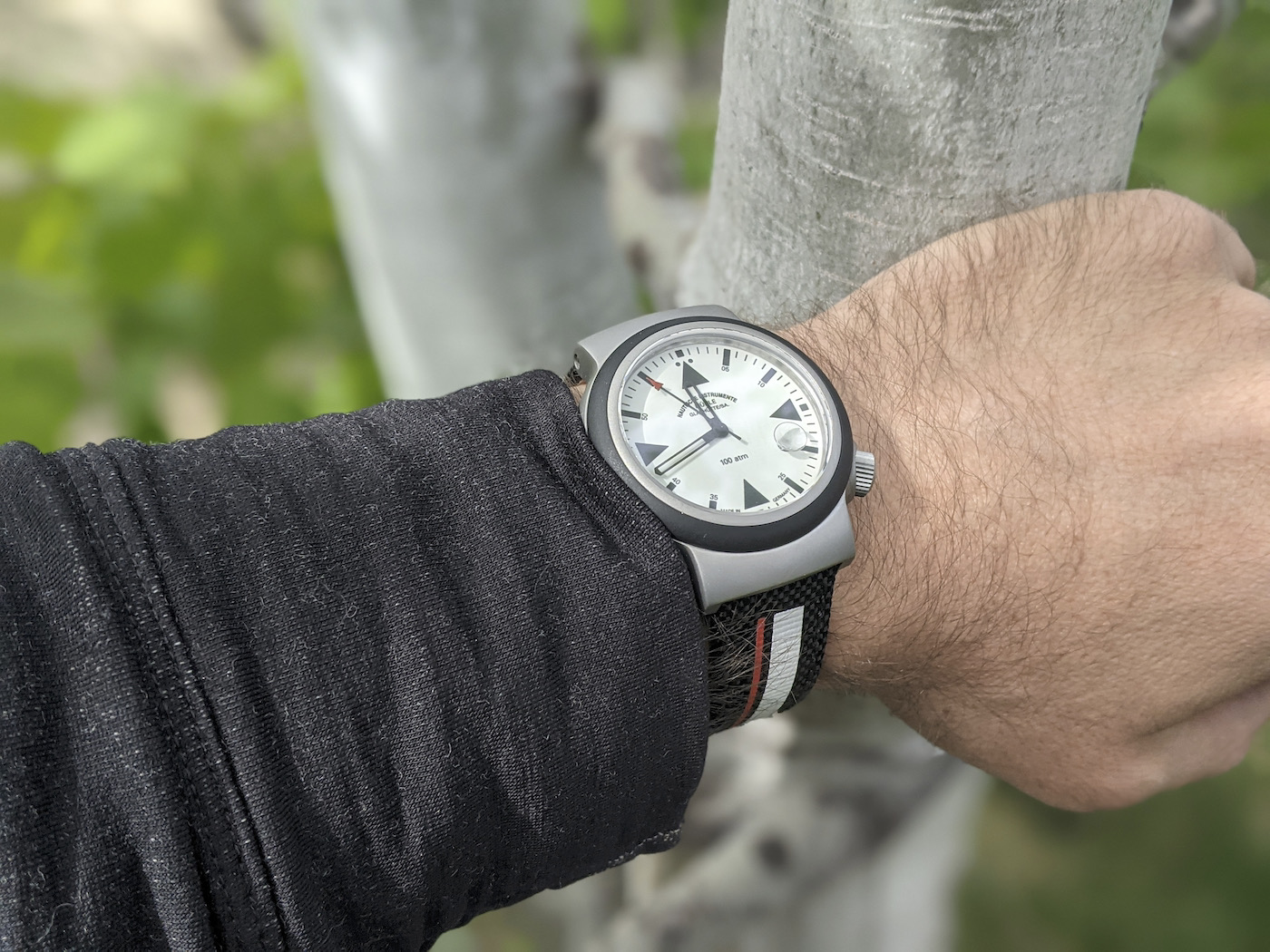 I mentioned that, visually, the watch wears smaller than you might expect at 42mm; however, the heft is certainly there. This is definitely not a lightweight watch and it feels as bombproof as it looks. That’s not to say it’s overly heavy, just robust. The lug-to-lug length is ~49mm, but the strong curvature of the lugs results in a watch that hugs my 6.75” wrist without overhang. Because I like robust watches with high water resistance, I spend a fair bit of time wearing dive watches. The S.A.R. Rescue-Timer gives you that same confidence-inspiring feeling of wearing a dive watch, but I’ve been appreciating how easily it slips under cuffs doesn’t catch on anything with all the smooth lines. One thing I do wonder about is how well the rubberized bezel will hold up over time. The soft material will likely pick up marks more easily than a steel bezel (though those marks will be less noticeable). Personally, I wouldn’t change it — I like the character it provides the case and, if it did get gouged, I’d happily just swap out the bezel when it’s time to get the watch serviced. 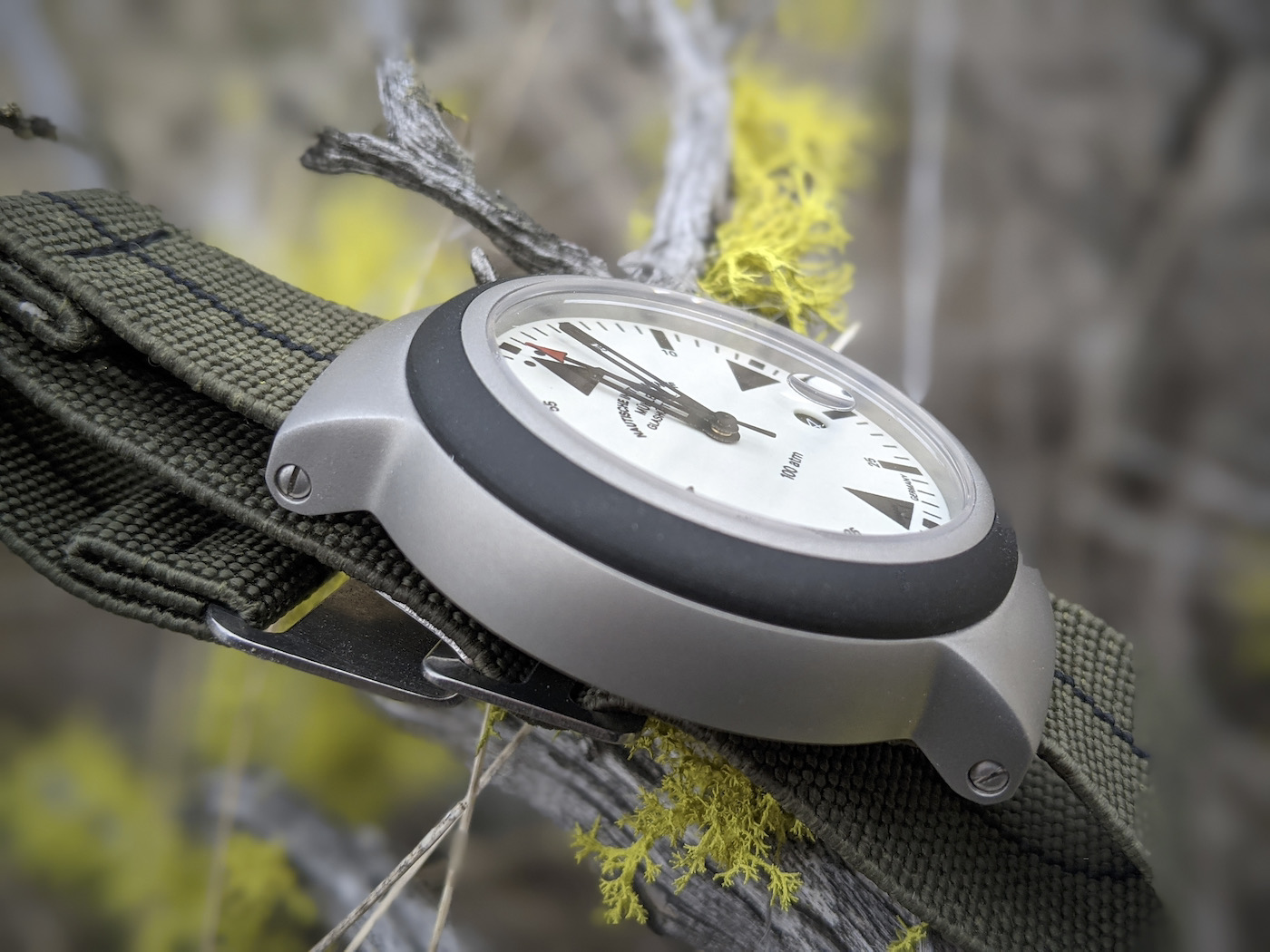 The dial on the original S.A.R. Rescue-Timer was all about maximum visibility and legibility – just look at those massive triangular markers at 12, 3, 6, and 9! The S.A.R. Rescue-Timer Lumen is no exception, but now that legibility is even stronger at night with the addition of a full-lume dial. Lume freaks will be very, very happy. The dial color is called cream, but I’d call it more of an off-white. It’s certainly not a pure white, but I personally wouldn’t go so far as to call it cream. Mühle Glashütte doesn’t specify which Super-LumiNova they use, but it glows as a cool blue (so perhaps C1?) and doesn’t bleed through as a muted green during the day like C3. 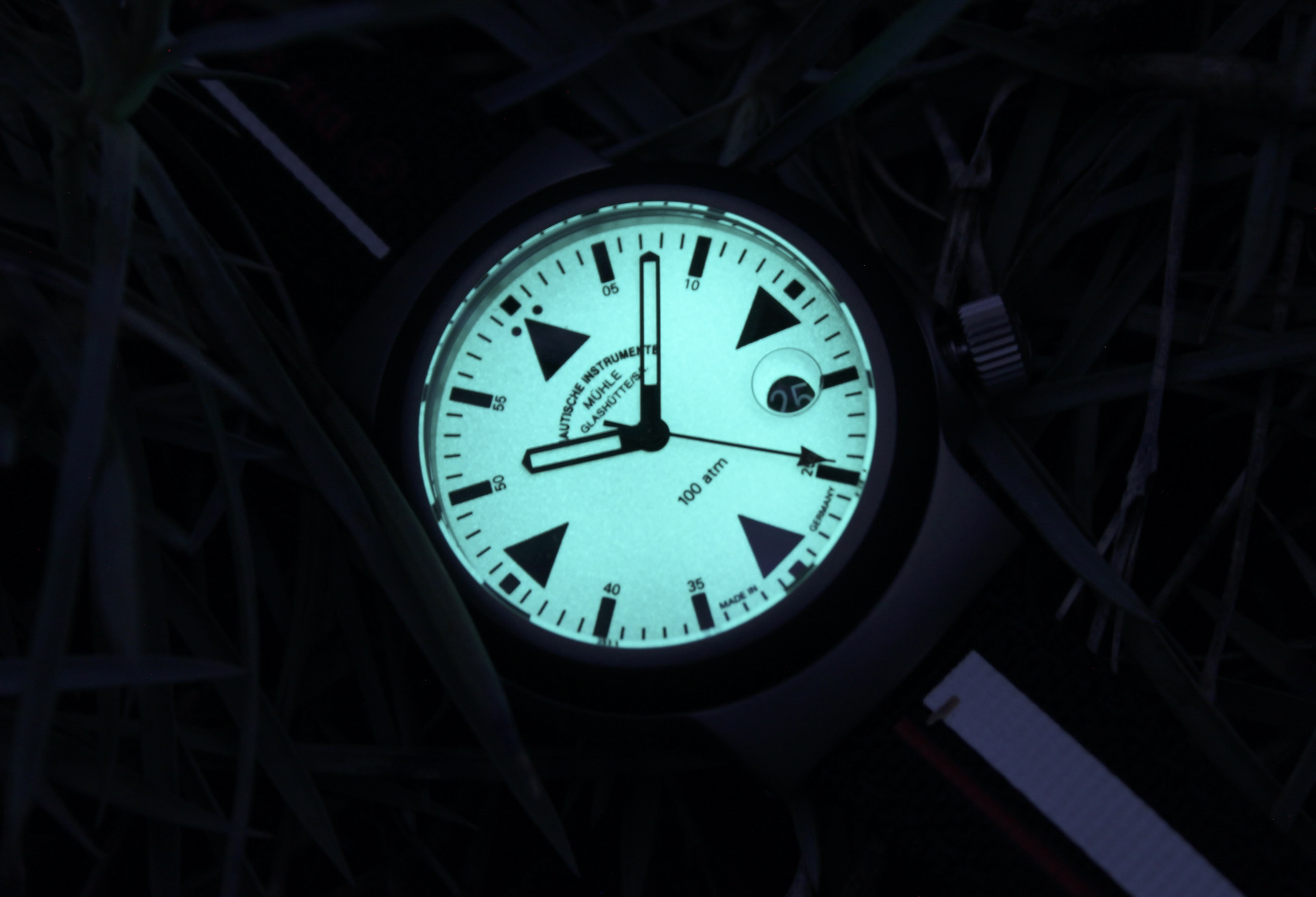 To complement the bold, black indices on the white dial, Mühle Glashütte adds skeletonized black hands, which result in a cool effect during the day and night. I dig it. The seconds hand is also black but has a bright red arrow at its tip. Typically, I dislike the watch industry’s over-reliance on red as an accent color for seemingly everything, but Mühle Glashütte’s restraint here (not adding a fully red seconds hand or additional red text) works quite well, and adds a touch of visual interest without being overbearing. 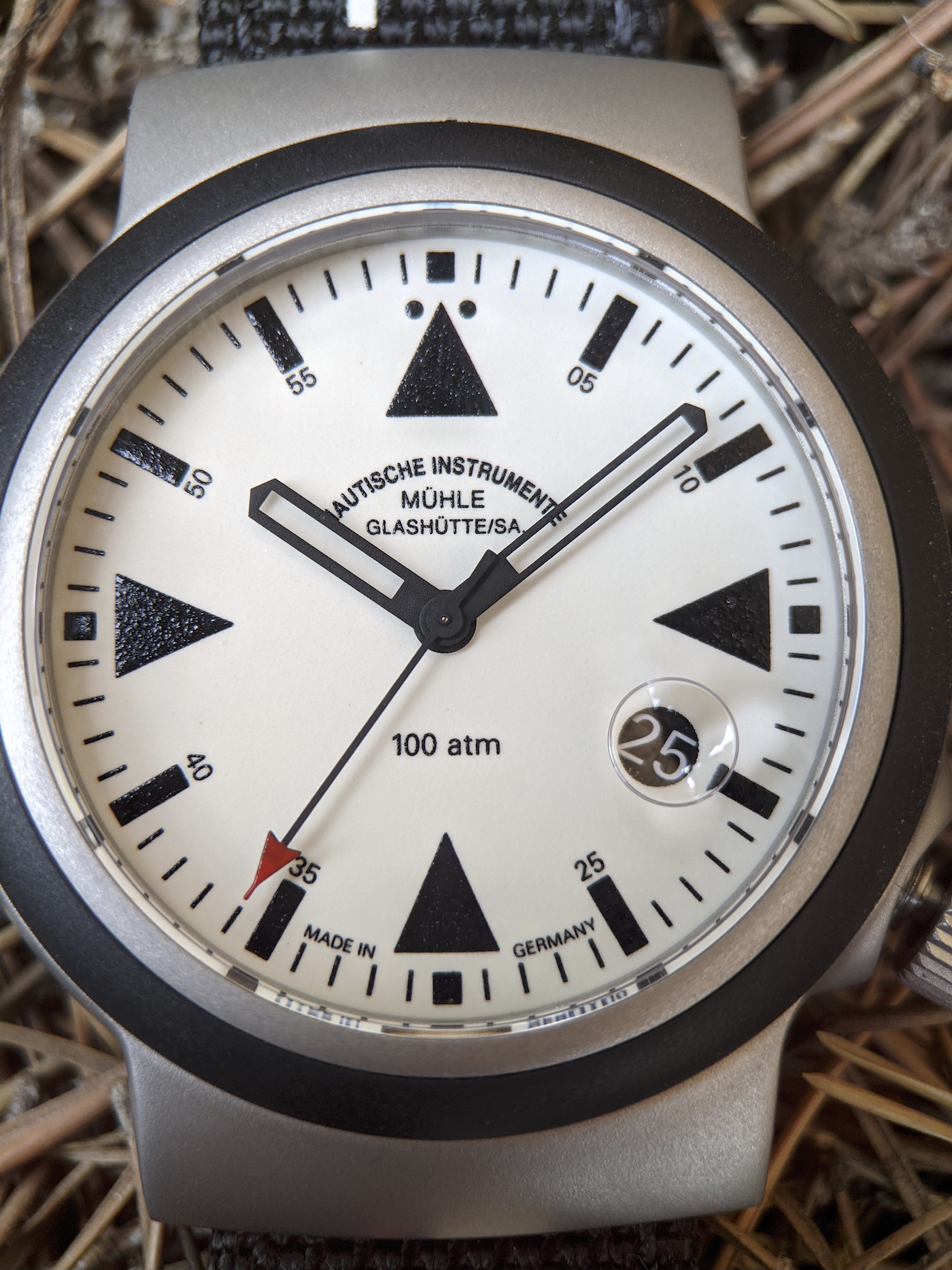 Watch aficionados are quite particular about date windows (myself included) and Mühle Glashütte seems to have committed every date window sin that brings out the pitchforks: date window at 4 o’clock, cyclops date magnifier, and a white-on-black date window that contrasts the dial instead of matching. And yet, it works. The date placement at 4 o’clock aligns with the 4 o’clock crown, which provides visual balance. And, instead of a date magnifier on top of the crystal (which tends to attract dust and some see as a wart on the crystal), Mühle Glashütte places the magnifier on the inside of the crystal. Sadly, my eyes aren’t what they once were, so I for one, appreciate the date magnifier if there’s going to be a date. Finally, the white-on-black makes sense visually – if you’re going to call attention to the date, it’s logical to make the date a focal point and visually contrast against the dial while retaining the monochromatic color scheme. Don’t get me wrong, I think the watch would look great without a date, but the way Mühle Glashütte executed the date window simply works with the overall function-focused and funky aesthetic of the watch. 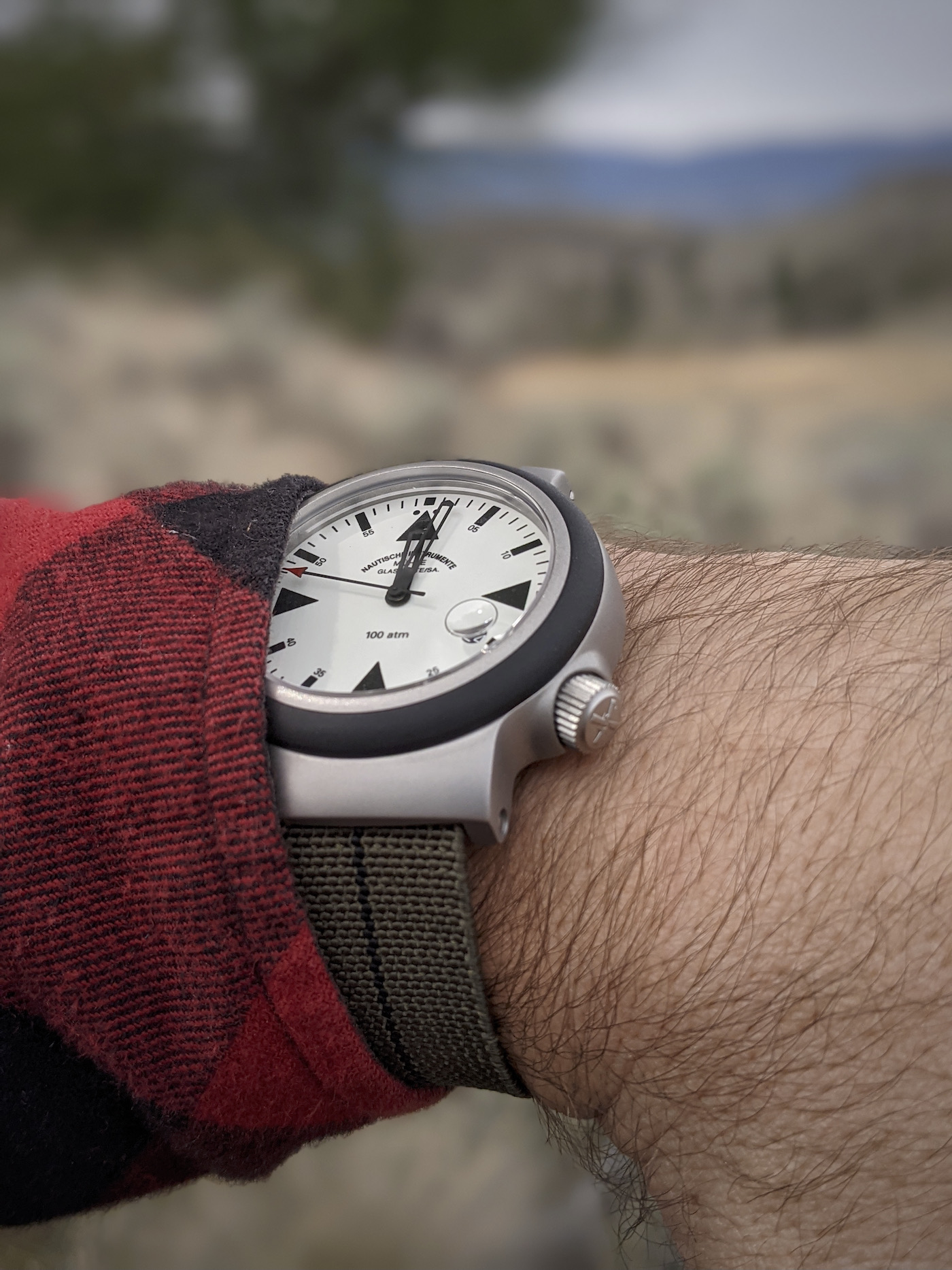 Now, we get to the strap – to me, this is the one aspect of the watch that lets it down… but luckily, you can choose to purchase the watch on rubber or bracelet instead. The textile strap has leather backing and is sturdy and well-made, but the issues are two-fold. First, the strap is quite short – even with my relatively small 6.75” wrist, I was on hole 5 of 7 (I’m usually on the second or third hole for most straps), meaning that the strap simply won’t fit large wrists. Second, the painted stripes and text feel a bit cheap and, to my eyes anyway, are over-the-top for the aesthetics of the piece. A simple, striped NATO-style strap would have been an easy option to add color. Finally, the strap is quite stiff and I did not find it very comfortable, though I’m sure it would break in with time. So, for most of my time with the watch, I mounted it up to an Erika’s Originals MN strap, which did the trick. Enough complaining about the strap – it’s an especially minor issue considering you can purchase the watch on a custom-fitted rubber strap with an overbuilt clasp for the same price or pay 100 euros more for a bracelet. Personally, I’d go with the rubber strap and switch things up from time to time with an Erika’s Originals or NATO-style strap. 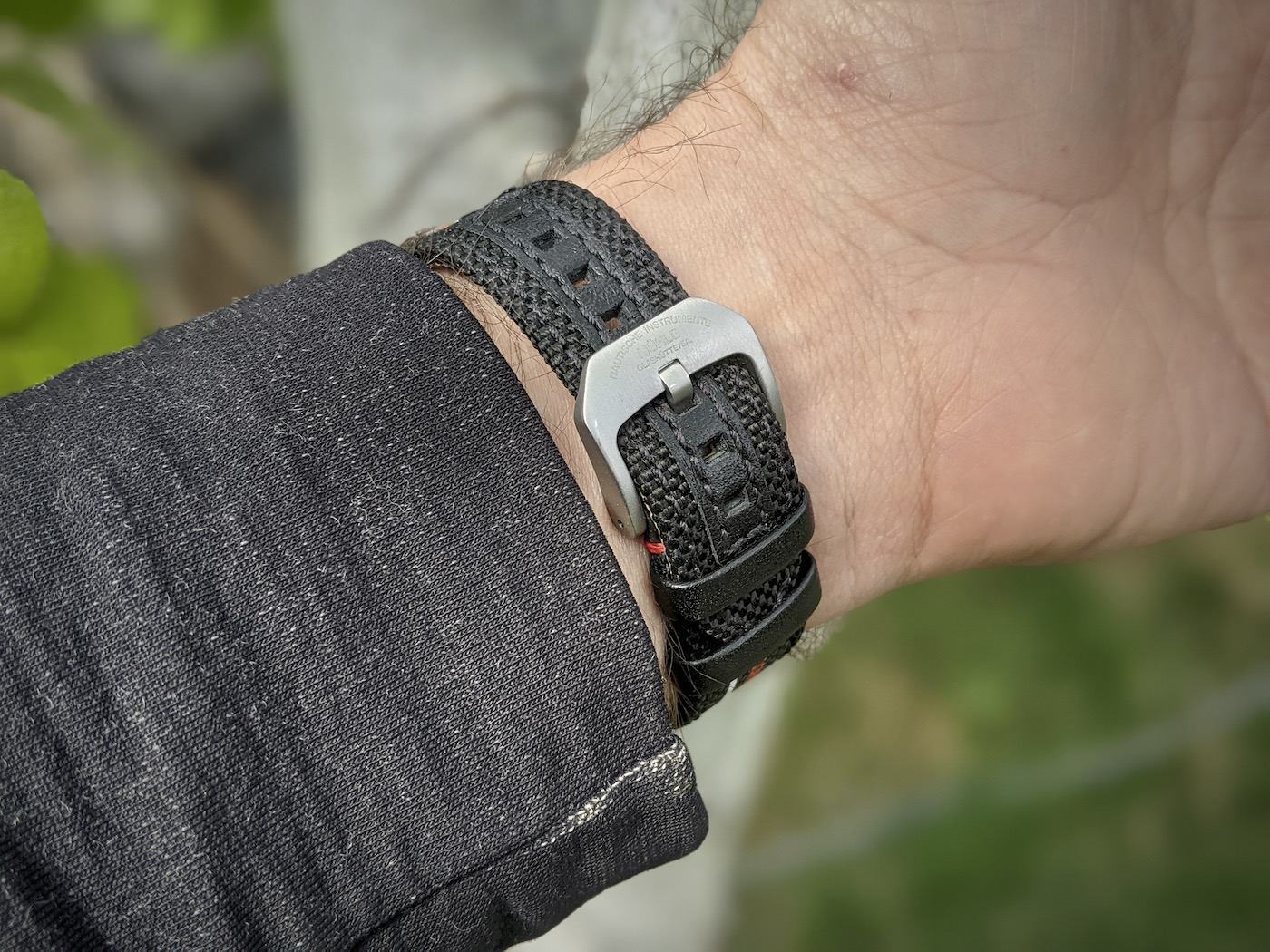 A couple quick notes on the lugs and lug-width. Though the website lists the watch as having 22mm lugs, the lug width is actually 20mm – my guess is that it’s listed as such because the rubber strap and bracelet flare out at the case to match the wide hooded lugs. Now, the lugs are certainly going to be a divisive element, but from a functionality standpoint, they’re excellent. I’m a big fan of screwbars instead of springbars simply because they’re so robust, and hiding those beneath the hooded lugs ensures that you’re not going to dislodge a springbar simply from smacking the watch against a rock. Overbuilt for ease of mind and to serve a purpose – exactly what I’d expect from Mühle Glashütte. 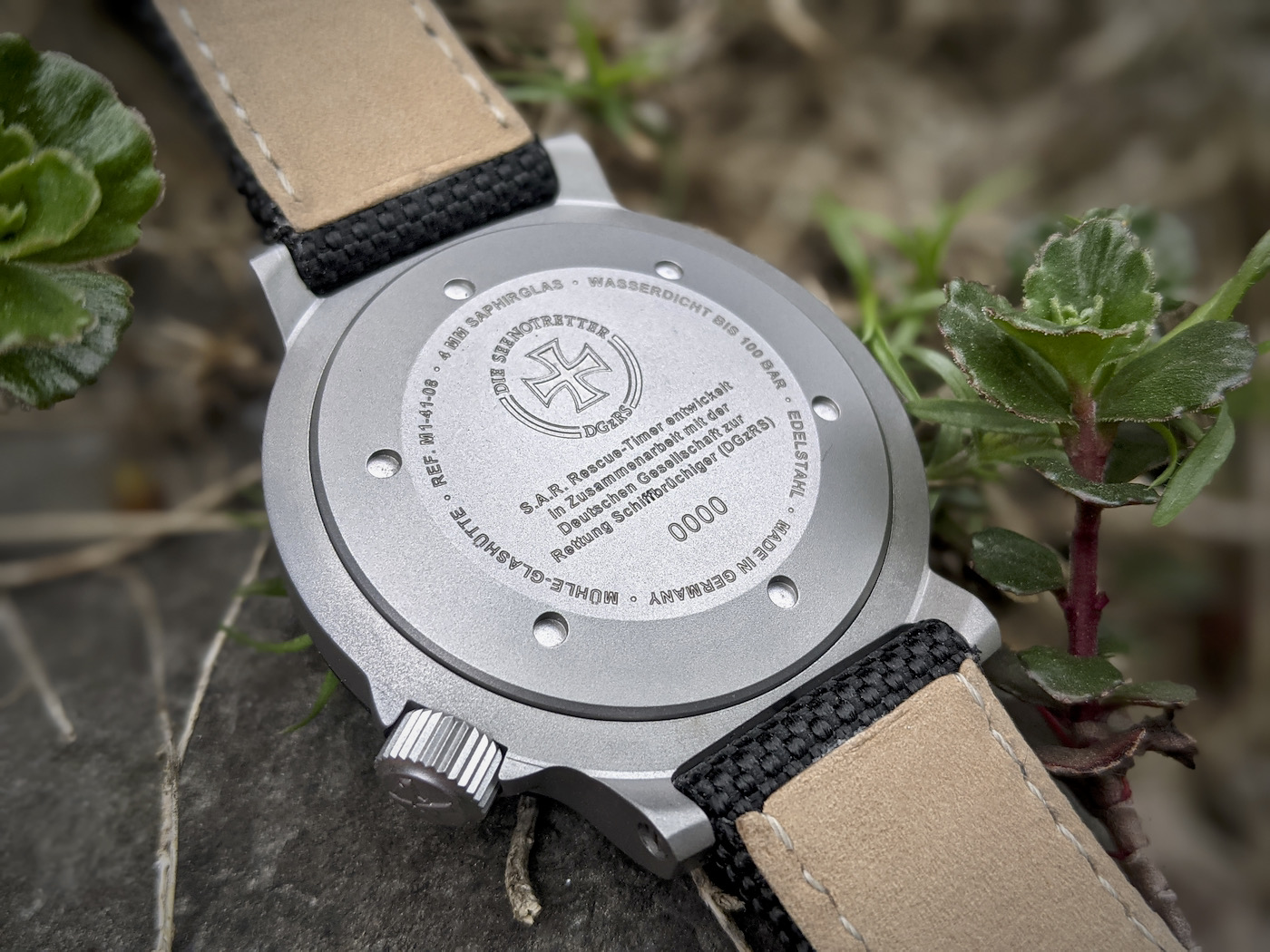 The S.A.R. Rescue-Timer Lumen is powered by the Sellita SW 200-1 automatic movement. However, in order to earn the Glashütte designation on the dial, the movement is substantially reworked by Mühle Glashütte. Aside from a custom rotor and finishing, Mühle Glashütte adds their patented woodpecker-neck regulator. This is an interesting alternative to the classic swan-neck regulator and modification that allows the regulator to resist movement during impact between the fine-adjustment screw and counter-pressure spring. The end result is a shock-resistant movement that can be regulated with high precision. In other words, they’ve taken an already robust and time-tested movement and made it even more robust and functional. Works for me. 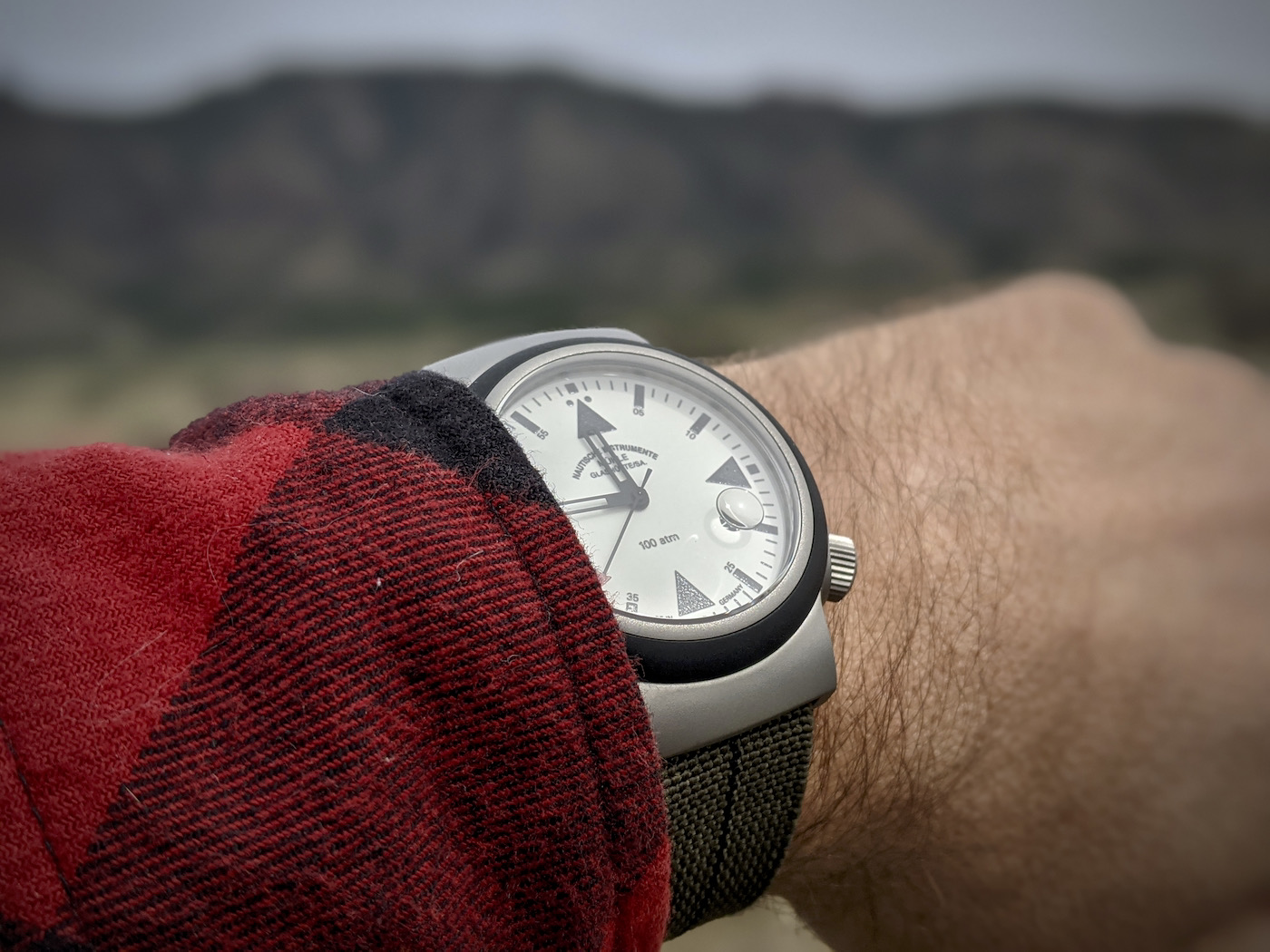 So, who is this watch for? Well, technically the German Maritime Search and Rescue Association, but you certainly don’t need to be spending your days rescuing errant sailors from certain doom to enjoy the S.A.R. Rescue-Timer. If you appreciate the aesthetics of this piece, either on their own merit or because of the functional considerations that led to this unique look, then this is a watch that certainly won’t let you down when it comes to the rough and tumble. If you’re in the market for an overbuilt tool watch, chances are that you’re already looking at German stalwarts like Sinn and Damasko. While Sinn has offered full-lume dials in some limited-edition models, Damasko offers a number of different models with full-lume dials, both with and without timing bezels all in roughly the same price bracket. That said, the aesthetics of the S.A.R. Rescue-Timer are one of a kind, and there’s really nothing else like it. If the aesthetics of this watch resonate with you, the S.A.R. Rescue-Timer is certainly worth a long, hard look (especially in the dark). The Mühle Glashütte S.A.R. Rescue-Timer Lumen is available for €1850 (including VAT), on a textile or rubber strap and €1950 on bracelet. For more information, please be sure to visit the brand’s website.

Necessary Data
>Brand: Mühle Glashütte
>Model: S.A.R. Rescue-Timer Lumen
>Price: €1850 including VAT
>Size: 42mm-wide, 13.5mm-tall, 49mm lug-to-lug
>When reviewer would personally wear it: Anytime, but especially when I’m heading out hiking or on any sort of adventure.
>Friend we’d recommend it to first: Fan of function-first aesthetics who wants a purpose-built watch that will stand up to pretty much anything. Also, someone that wants extremely high nighttime visibility.
>Best characteristic of watch: Fantastic legibility day or night and bombproof construction.
>Worst characteristic of watch: The textile strap, but it’s an easy swap.