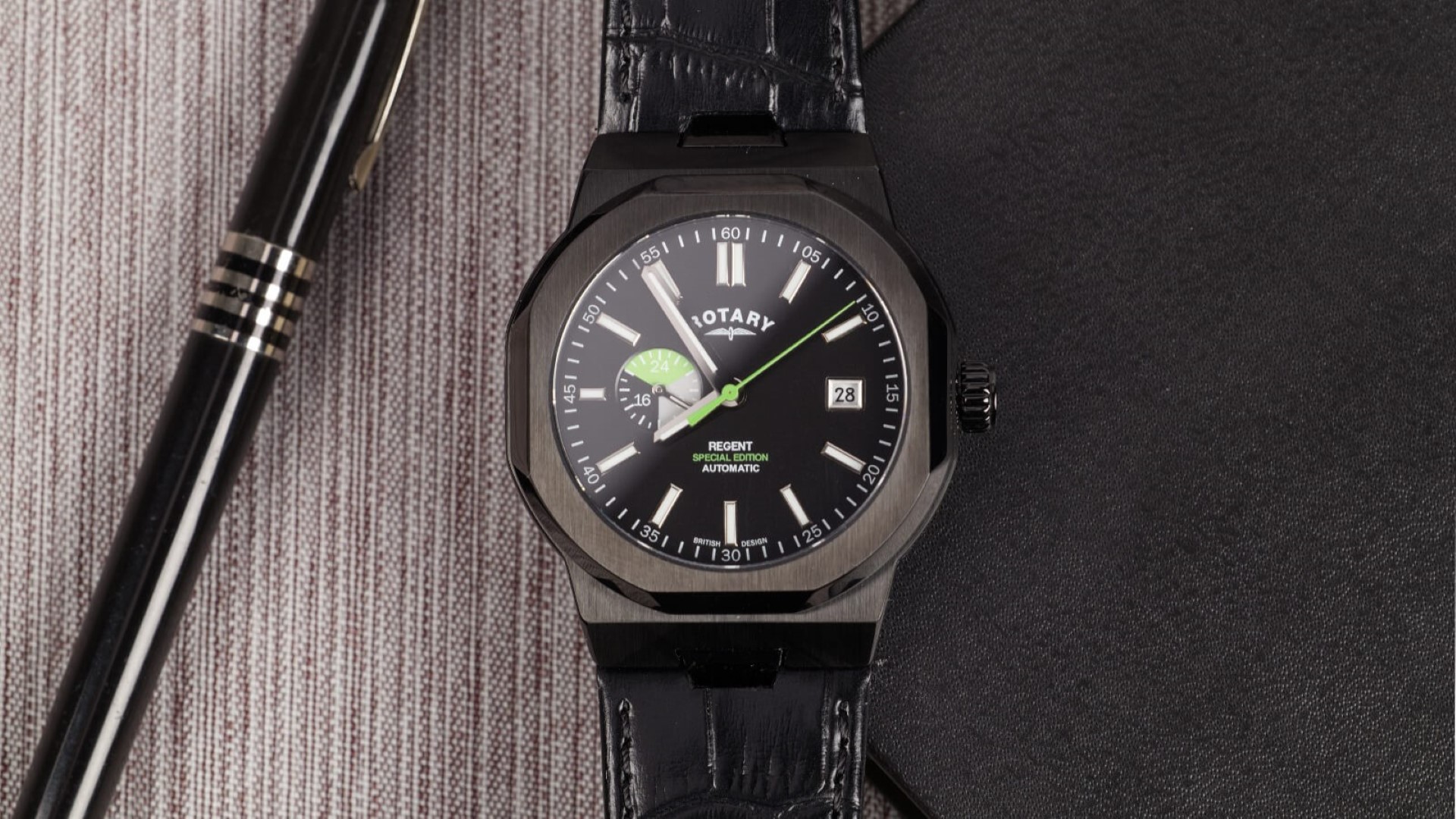 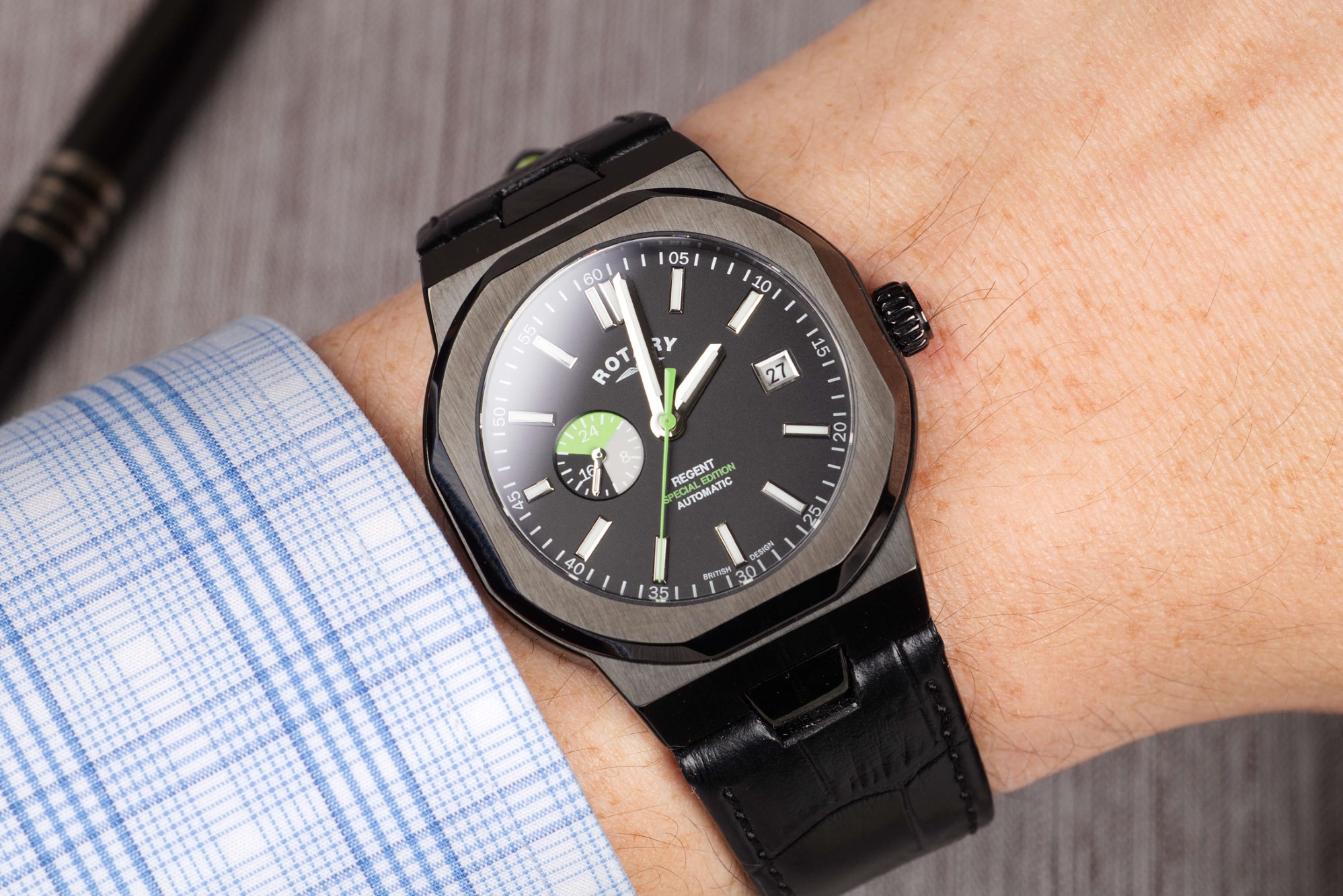 James Bond may wear an Omega, but Sherlock Holmes wears a Rotary. At least, Benedict Cumberbatch as Sherlock Holmes did. And not this one, but that’s not the point. Plenty of people buy any Omega because James Bond wears one; I see no reason the same shouldn’t be true for Rotary. Rotary is a brand with Swiss roots that, these days, finds itself located in London after its founder opened up shop there in 1905. As such, the brand prides itself on being British, with all its marketing copy pointed in that direction and even its dials featuring “British Design” in lieu of the aspirational (and often dubious) “Swiss Made” that adorns other brands’ dials. A brief perusal of the brand’s catalog reveals quite a mishmash of Affordable Luxury staples: mother of pearl, gold-tone quartz dress pieces, open-heart dials, skeleton watches — you know the type. If you take your time and browse, though, there are some standouts with legitimate appeal — the Heritage collection and the Super7 divers are examples, but the Regent collection is arguably the most on-trend offering from the brand. Today, I take a spin with a new all-black special edition of the Rotary Regent, an online exclusive with an integrated strap, a bold case, and a pop of color. 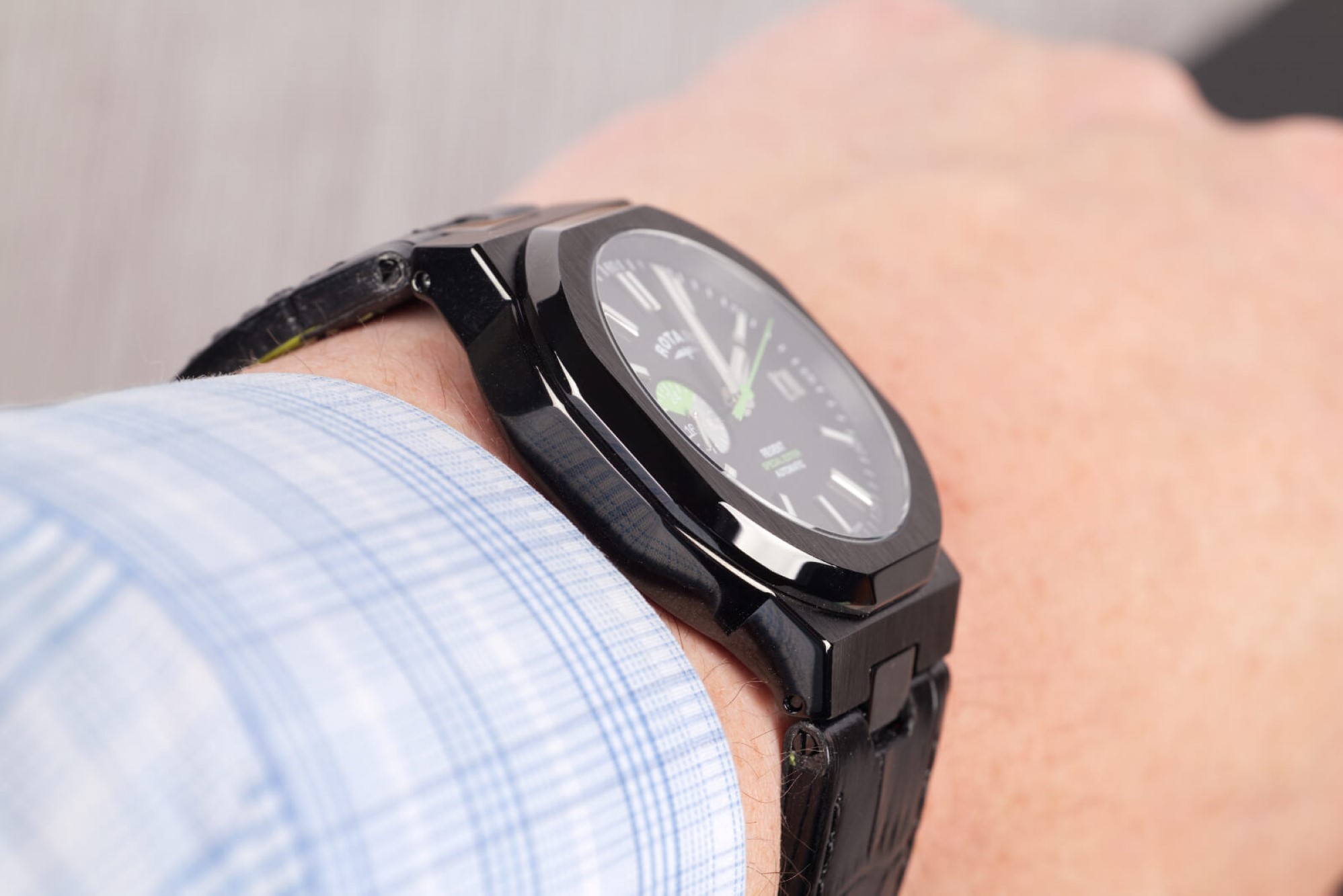 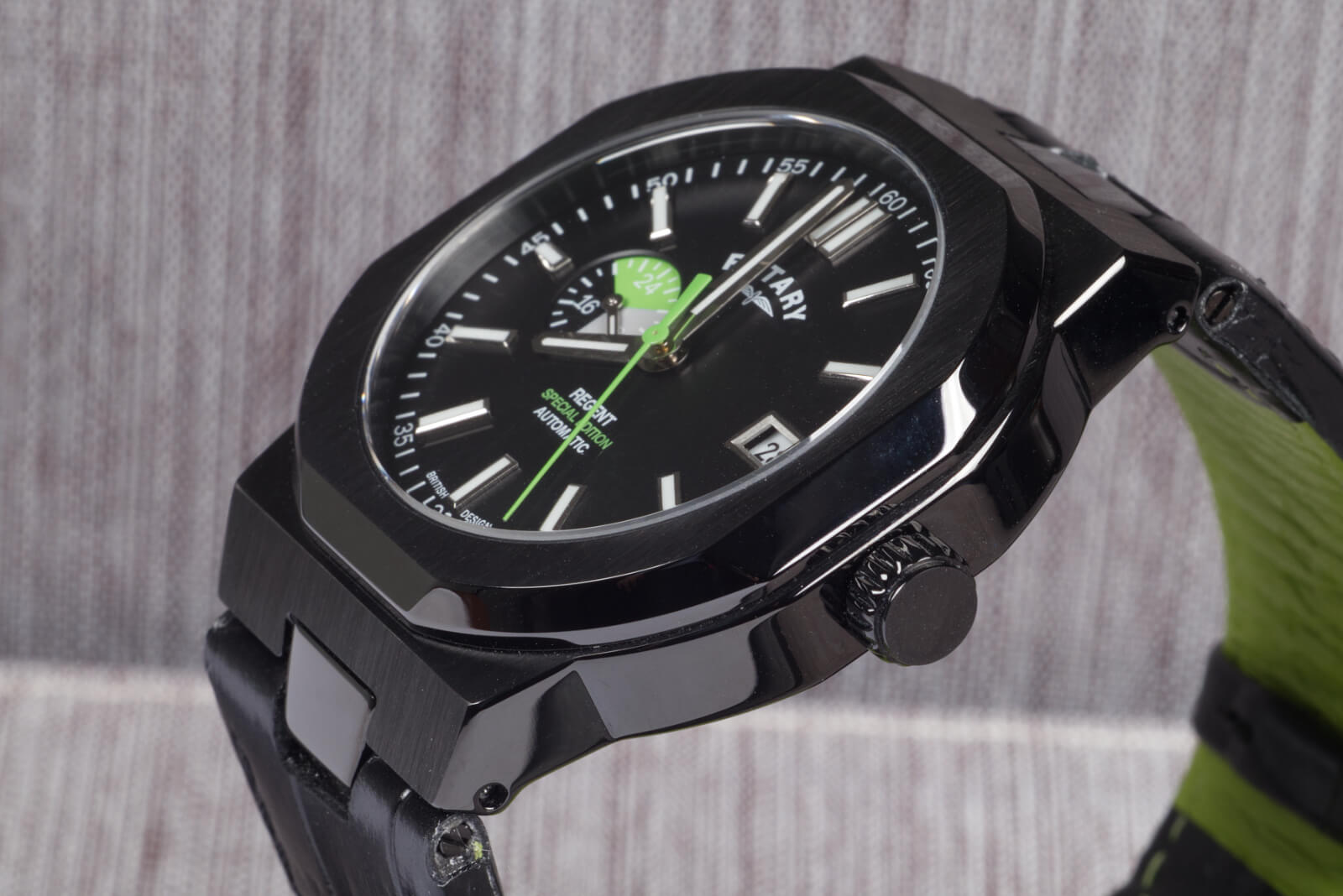 One of the hallmarks of this style of watch is a case with plenty of angles and facets, and the Rotary Regency doesn’t disappoint. The 41mm case has a pleasing blend of polished and brushed surfaces, with brushing dominating the top-down view. The brushing itself is well-defined — this isn’t some gentle, high-grain brushing, but a grittier finish that acts as a balance to the polish black of the bezel’s slopes and the case sides. I like the contrast, as it reinforces the edginess conveyed by the black PVD coating. The transitions between finishes are certainly adequate for this price range, but objectively could be a little sharper. The varying finishes also break the watch up a bit, and along with the modest 47.5mm lug-to-lug, this makes the watch wear smaller than its dimensions might suggest. Coming around to the side, the 3 o’clock pull-out crown helps ensure 100m water resistance, but I found it to be slightly undersized. Further, it has an odd softness to its ridges and overall shape that contradicts the angularity of the watch; I’d prefer something more robust and more in keeping with the case’s form. 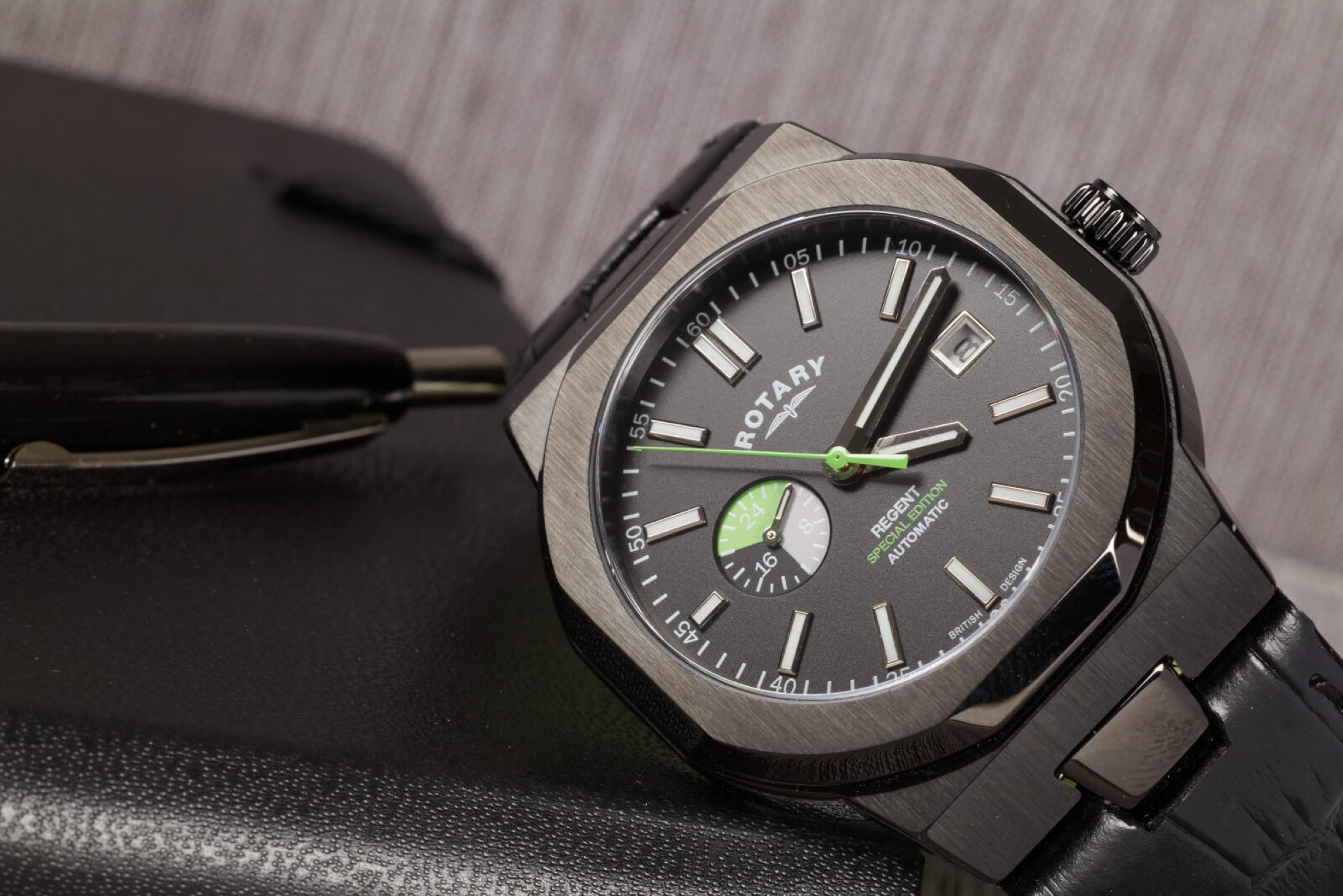 The crown isn’t a dealbreaker, though, for some, the integrated strap may be. Strap addicts like me who feel compelled to rotate not just watches but straps, dread feeling stuck on a bracelet (or worse yet, a single strap). One of the advantages of such a strap or bracelet, though, is that it creates an organic flow of the case down onto the wrist, and as such often yields an incredibly comfortable wear and allows a watch to seem smaller than it is (if you’ve ever tried a square Bell & Ross on its fitted strap, the effect is the same). Both are true with the Rotary Regent. The integrated strap (affixed with a screw bar through a single metal endlink) features a polished black DLC pin buckle and was comfortable and pliable right out of the box; conversely, its sheen and obviously embossed pattern make it look cheaper than it feels. 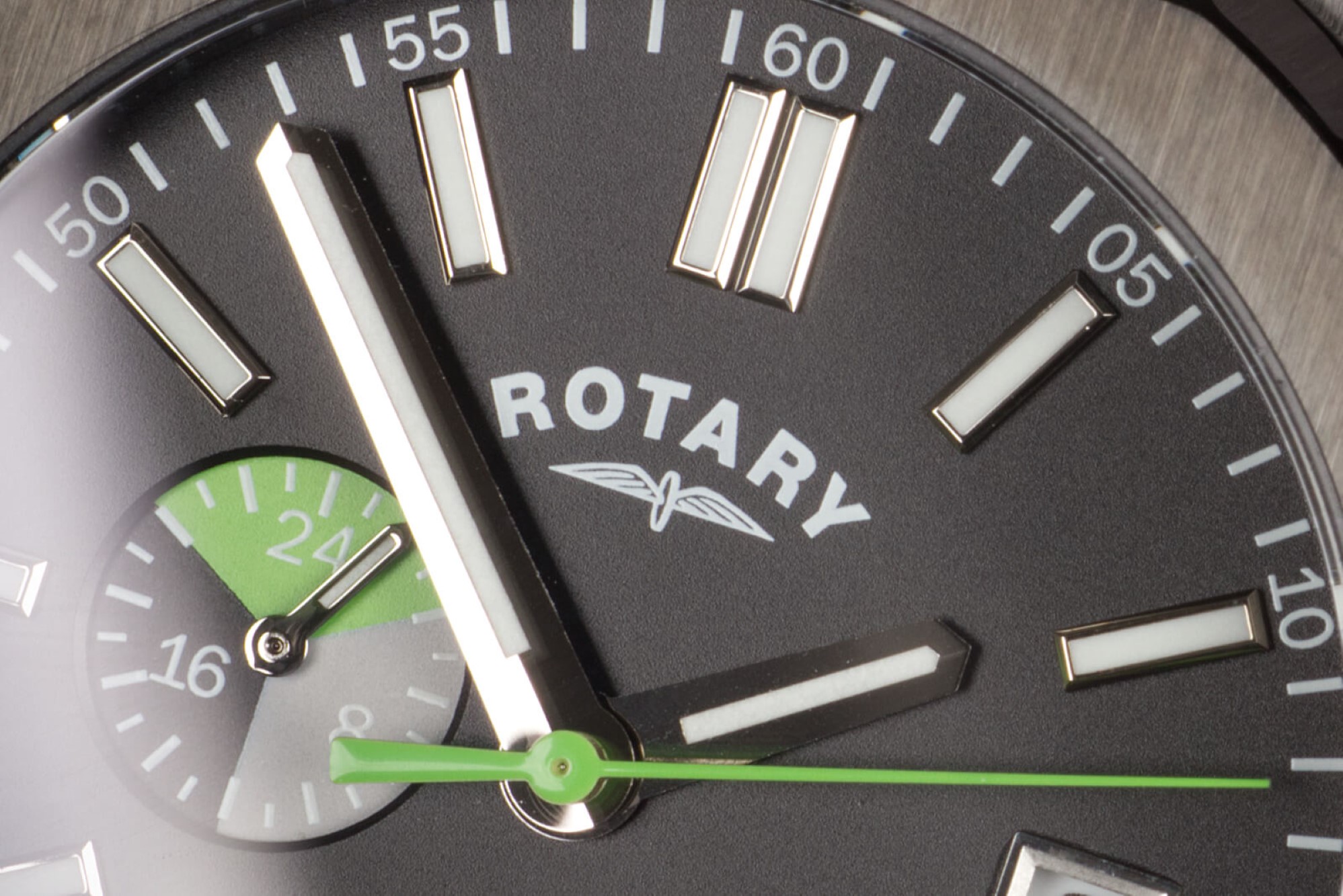 I don’t think it would be unfair to say the Rotary Regent’s dial is the draw of this watch, though it’s admittedly a close race with the all-black case. More accurately, it’s the splash of color, here in green but also available in yellow and red.  For what you’re paying, the dial is quite exceptional. It’s got a very subtle texture that adds a hint of personality, upon which build the green accents on the glossy hand, dial text, and 24-hour sub-dial. While I like the color segmentation of the sunken sub-dial, I don’t really understand the relevance of the segments; personally, having a segment fall from 8:00 AM – 4:00 PM would make more sense and let me know when I’m within “Maybe Get Some Work Done, Ya Jerk” time. On top of that, while it doesn’t bother me, I’ve never understood the purpose of a 24-hour sub-dial on a watch that only shows a single time — is this for the end times when we’re all crouched in a windowless bunker for months if not years and lose track of day and night? 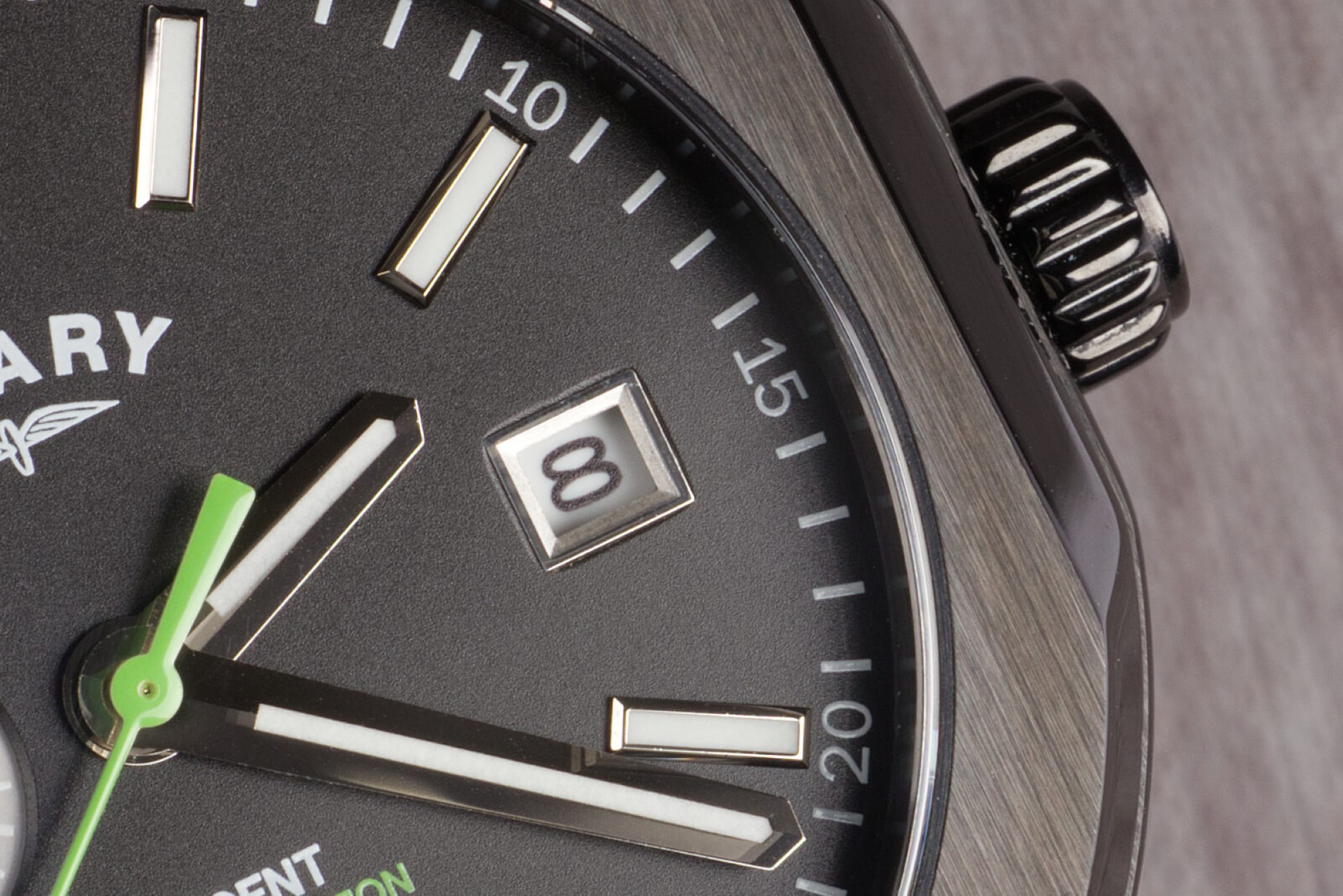 Anyway, I like the colors, and I like the applied indices that give the dial some depth and match the obelisk handset in their polish and lume. The lume is as you’d expect: not stellar, but not terrible, glowing enough to be read in low light, but not enough to surprise you and not for very long. One issue you often see in more affordable watches (to be sure, it seems the lower the price, the worse the offense) is haphazard date windows. They either float too far into the dial or sit too far at the periphery and are frequently simple cutouts with no thought given. Happily, the Regent’s date is perfectly situated within the arc of the hour markers and features a polished frame that complements the hands and indices. While it’s not color-matched, I think it still works, given the white of the lume, the dial text, and the minute track. 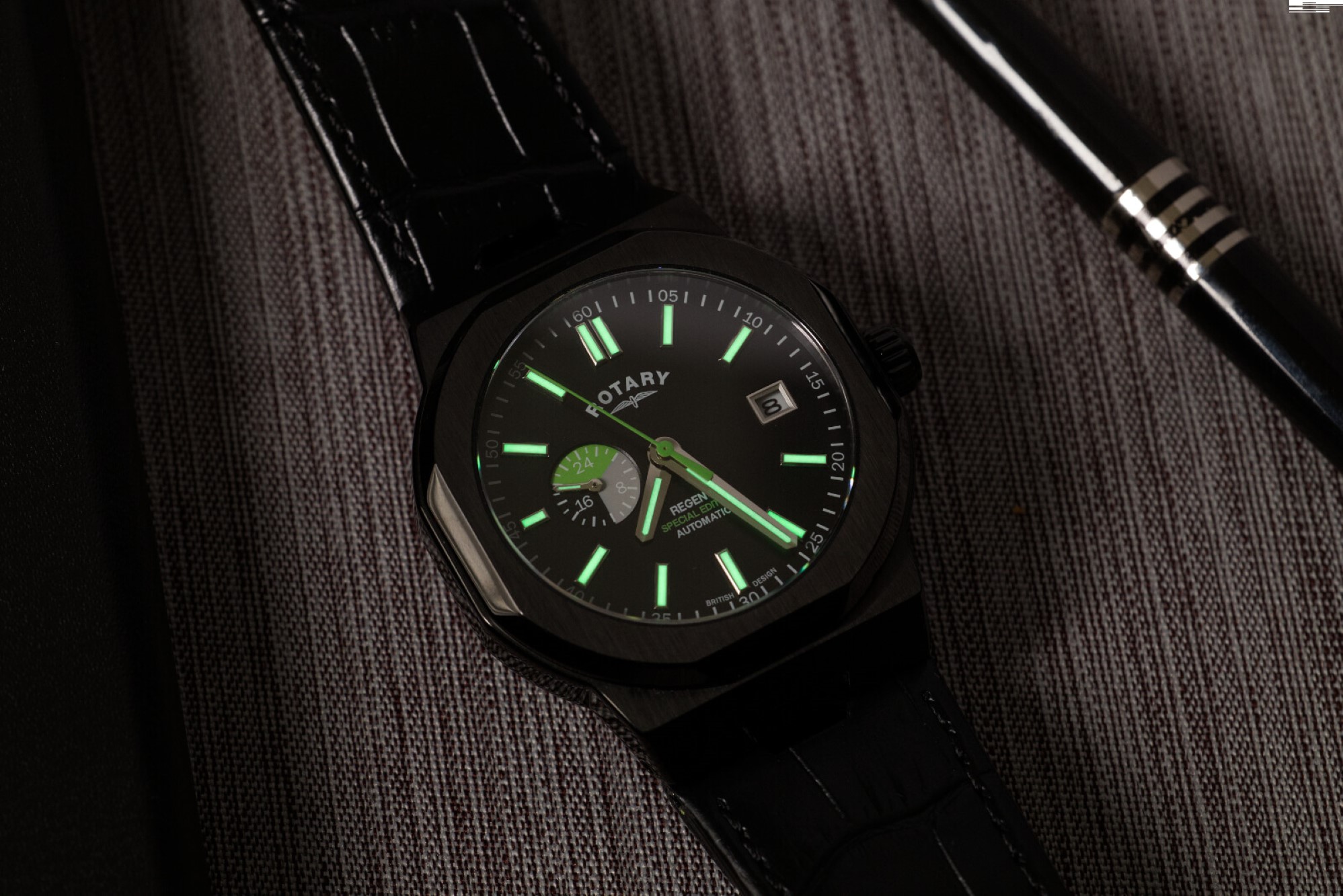 The Rotary Regent Special Edition is powered by a no-fuss Japanese Miyota 8217 caliber (which Rotary simply lists as “Movement: Automatic”). It’s not winning any awards, but coming from Miyota, you’re almost guaranteed a movement that will be reliable and easy to service — and if it fails, it can be easily and affordably swapped for a new module. The movement runs -20/+40 seconds per day, has 21 jewels, a rate of 21,600 vph, and a power reserve of 42 hours. It also features hacking and a quickset date. All told, you could do quite a bit worse. The movement is on display through a sapphire caseback and to its credit, does have a bit of decoration in the form of striping. I do wish there was a decorated rotor. Rotary appeals to a lot of first-time buyers, who tend to like “the spinny part,” as my friend calls it; I say they deserve a bit more than the generic Miyota rotor. 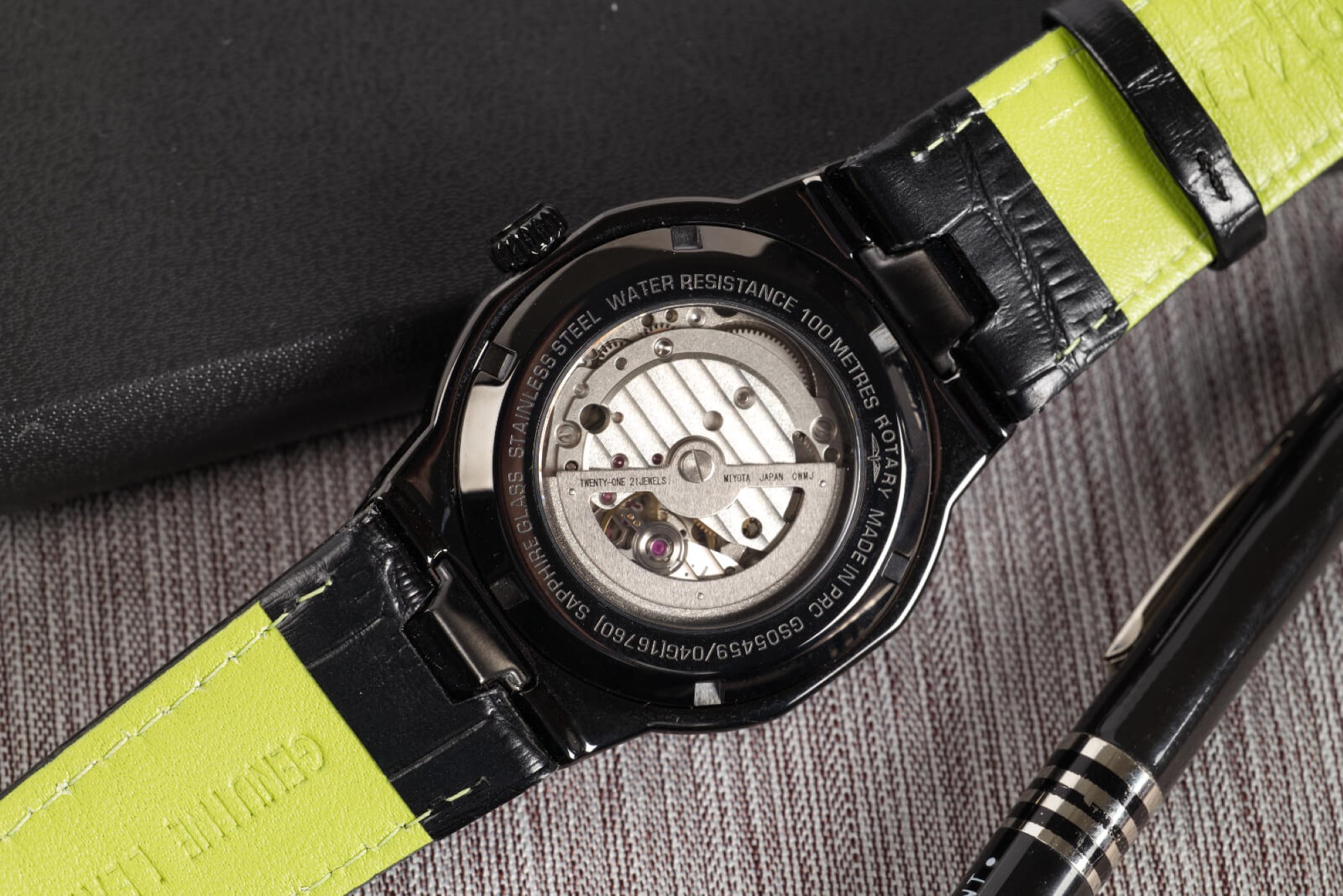 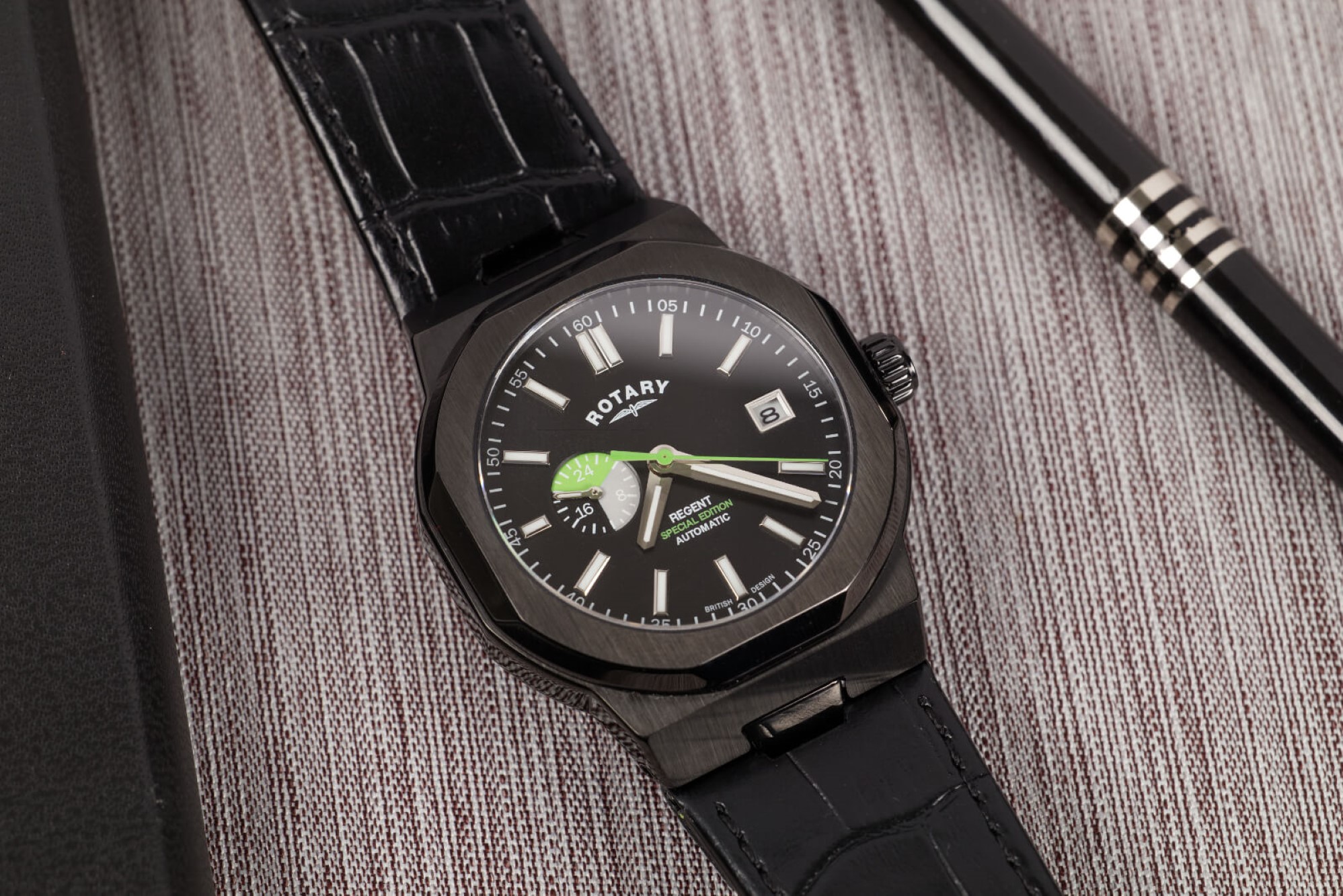 Right now, watches with integrated bracelets and straps are hot fire. Everyone. Is. Making. Them. The trend has its ostensible roots with the Audemars Piguet Royal Oak, created by Gerald Genta in 1972 (it just celebrated its 50th anniversary, which has been marked by a slew of auctions and special editions). Other entrants, of course, include the Patek Philippe Nautilus (eagerly awaiting its successor after a confusing double swan song), the old IWC Ingenieurs, and current offerings from brands ranging from A. Lange & Söhne to Tissot. My point is that there’s a lot of competition, and making your mark is no easy task; it’s easy to dismiss any offering as derivative, but that’s facile in the extreme. Watches like the Rotary Regent Special Edition — part of a collection that also includes bracelet options, quartz chronographs, and a gold PVD skeleton model — allow access to a design that many wouldn’t be able to afford otherwise: most mechanical, integrated bracelet/strap watches start in the thousands, and some go well beyond the tens of thousands. The Rotary Regent Special Edition here not only represents that important access point from a consumer standpoint but offers quality and tons of character for those willing to see and appreciate it.

Necessary Information:
>Brand: Rotary
>Model: Regent Special Edition GS05459/04G
>Price: $479 USD
>Size: 41mm wide, 11.35mm thick, 47.5mm lug-to-lug distance
>When reviewer would personally wear it: To a concert, with jeans and a t-shirt, or every day if I owned a Slingshot roadster.
>Friend we’d recommend it to first: Someone who wants their watch to stand out and make a statement, but doesn’t want to spend on a solid carbon or ceramic case
>Best characteristic of watch: Contrasting case finishes, strap comfort, pop of color on the dial (and the strap, for that matter)
>Worst characteristic of watch: Small date window, strap changes nearly impossible/no strap versatility, no real explanation for the watch’s existence