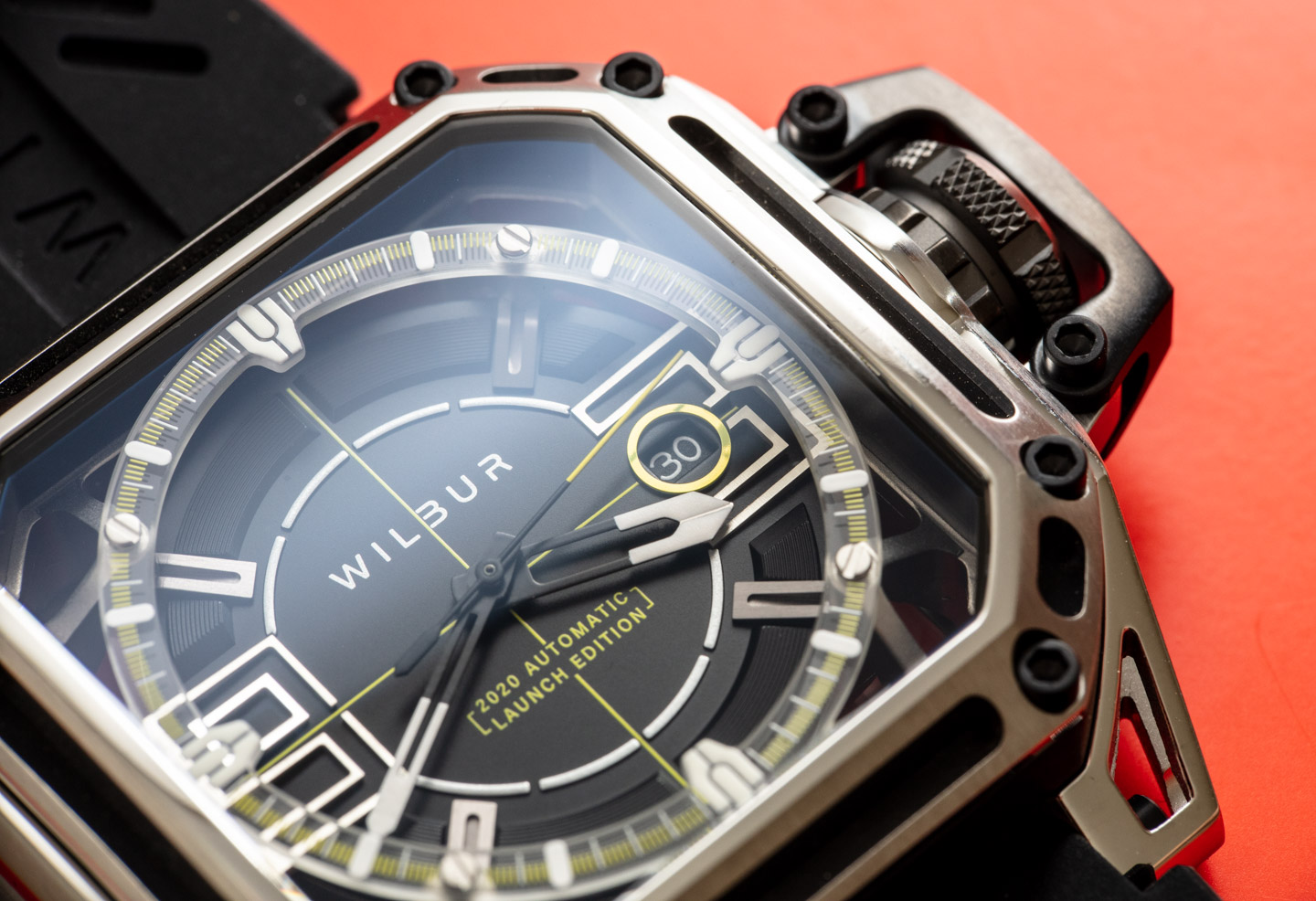 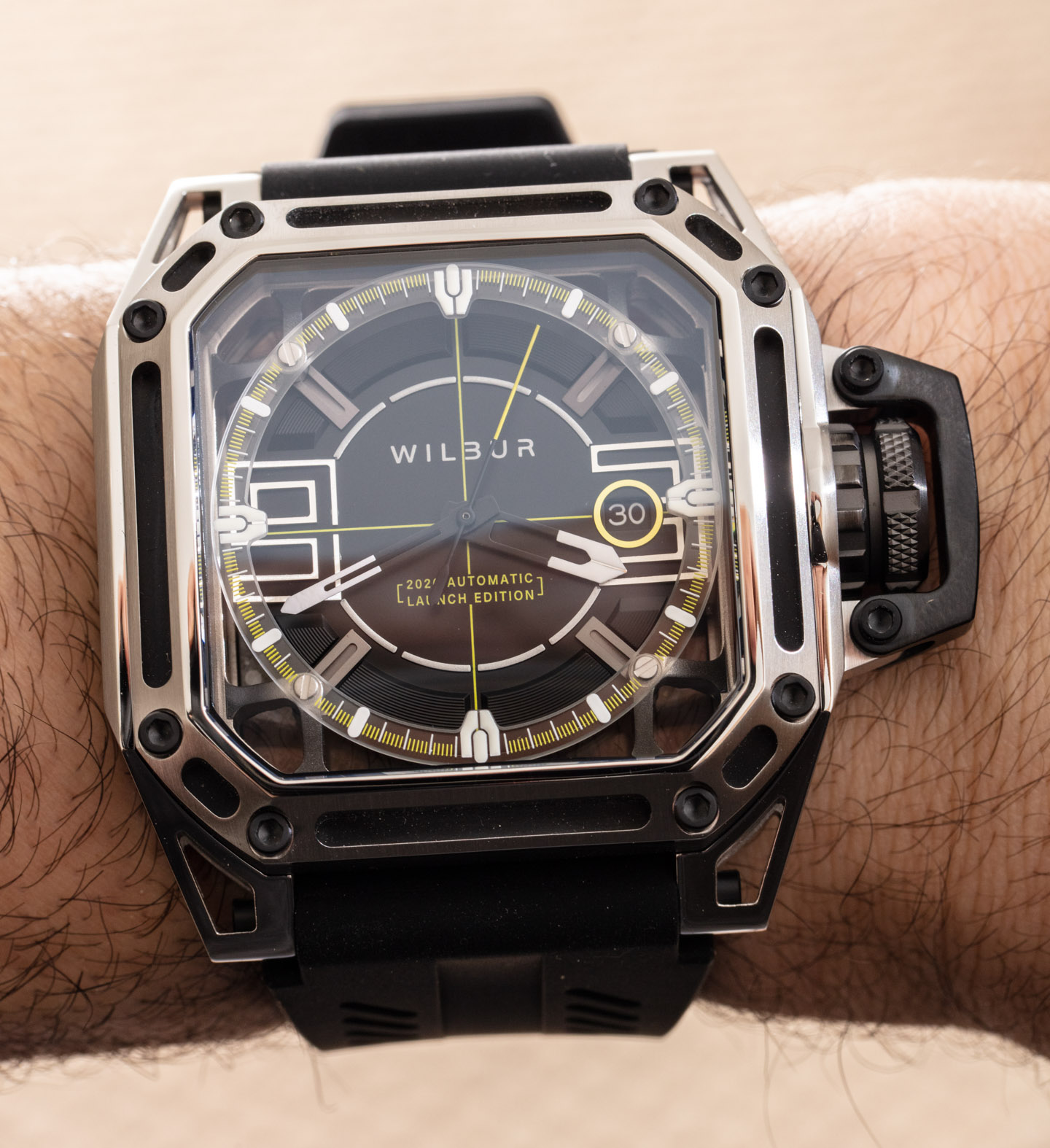 Jason Wilbur is the talented designer behind the still-fresh Wilbur Co. watch brand. He is based right here in Southern California and has a background in both graphic and industrial automotive design. Most watch collectors know Wilbur’s work in the form of the iconic Tread 1, a luxury belt-driven watch produced by the American brand Devon. Founded by Scott Devon, the Devon brand made a name for itself with the over-the-top design of the Tread 1 and Tread 2 watches, as well as the fact that they were powered by small one-step motors and used an integrated circuit board. These are electronic elements, and they proved quite controversial in the market of mostly mechanical watches. Devon is actually going to make a re-appearance in 2021, but back in 2020, Jason Wilbur launched his own brand — with an entirely mechanical watch.

Professionally, Jason Wilbur has more or less stopped designing for third parties and is now all about the Wilbur brand. His particular form of optimistic pop-macho futurism is born of a love for and study of modern California vehicle design theory. Wilbur loves function equally, as well as various “wow” factors, and his products are certainly representative of this. 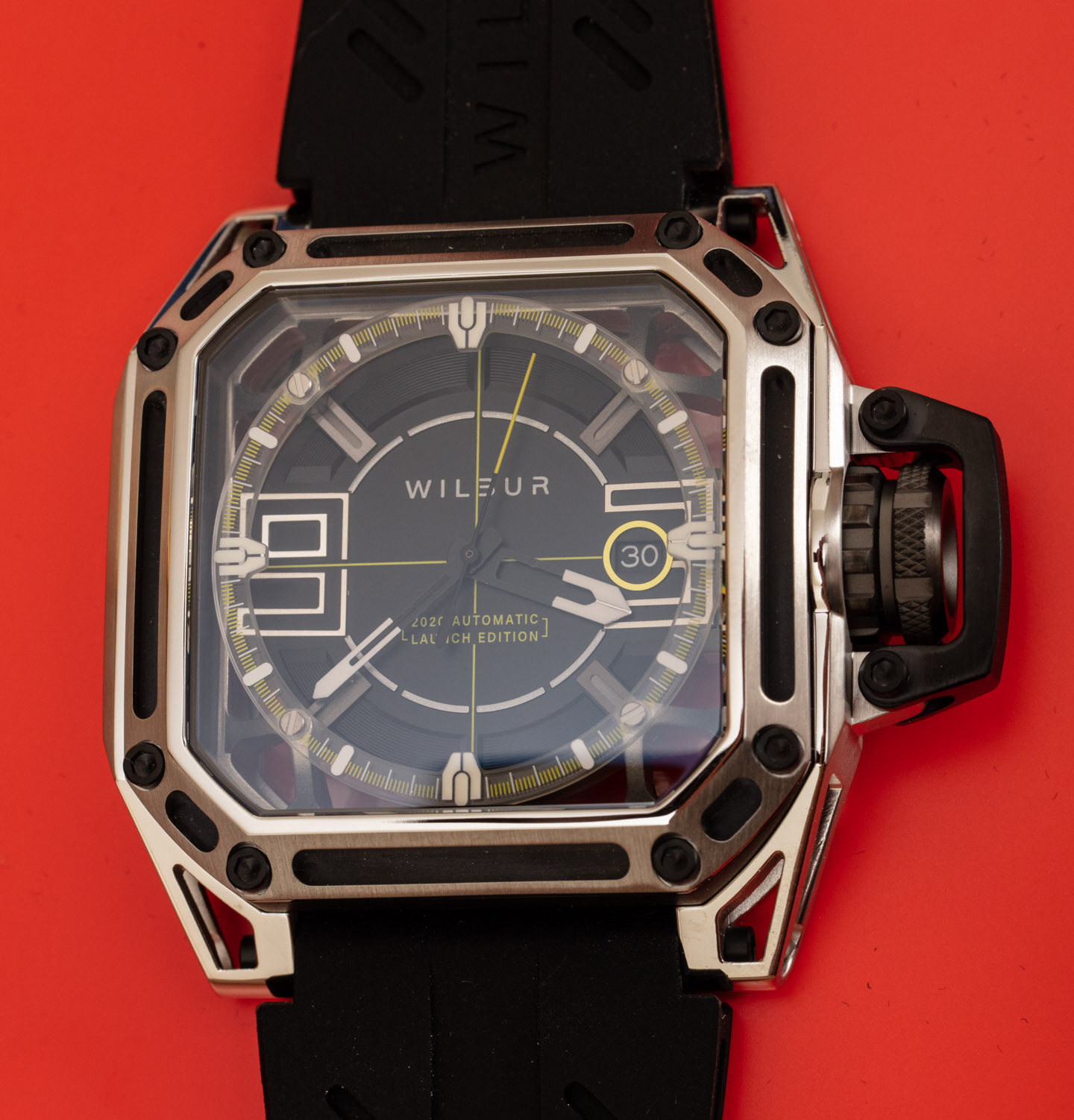 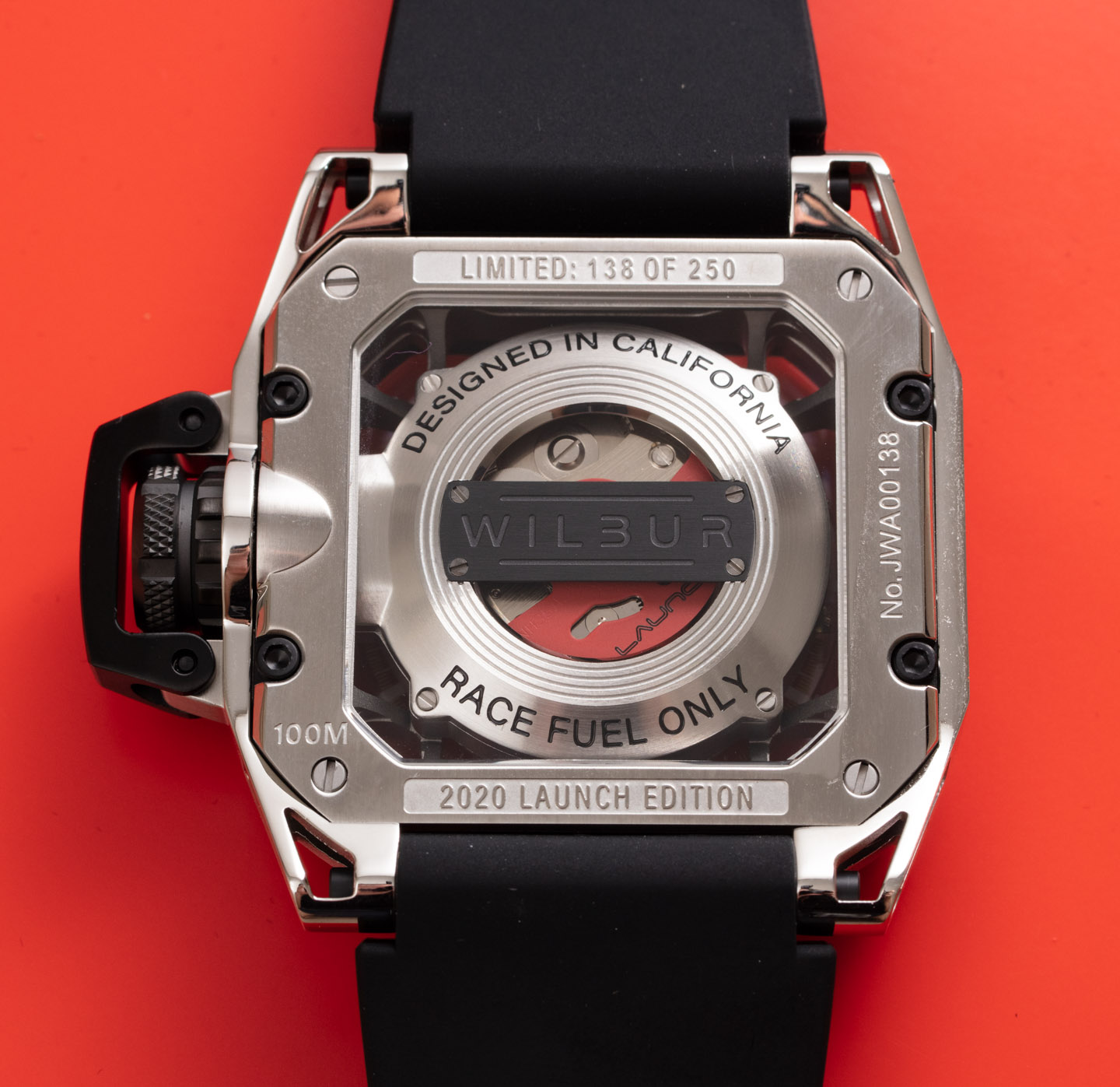 Now, I’m probably going to embarrass Mr. Wilbur by talking about his underpants. Well, his underpants watch, that is. This is actually a great story, only made humorous by the fact that the clothing brand 2Xist is mostly known as a producer of men’s briefs. The clothier wanted to expand and ended up working with Wilbur to design the 2Xist New York City watch (that I reviewed back in 2013 here).  If you look at that timepiece series, you will immediately see where this Wilbur JWA watch evolved from. The JWA is a superior watch in all ways from a production standpoint, though I do think the New York City watch had some slick lines to it. Suffice it to say that 2Xist’s dream of becoming a more adept “men’s lifestyle brand” never came to full fruition.

Wilbur Co., as a brand, has launched with a small number of “2020 Automatic Launch Edition” watches, such as this Wilbur JWA. The JWA is a limited edition of 250 pieces — and really, a remarkably designed watch. It is pure Jason Wilbur in both its proportions and ambition. It is so much a “design piece” that no one could ever claim it is a tool watch. Then again, the JWA’s design is a love poem to tools and modern gear design. Skeletonization of the case reflects industrial performance weight-saving needs, and the large exposed bolts are similar to a lot of custom mechanical great is help together. The watches are also modular, meaning they are designed in a way so that the nine case parts (for example) can be easily swapped. 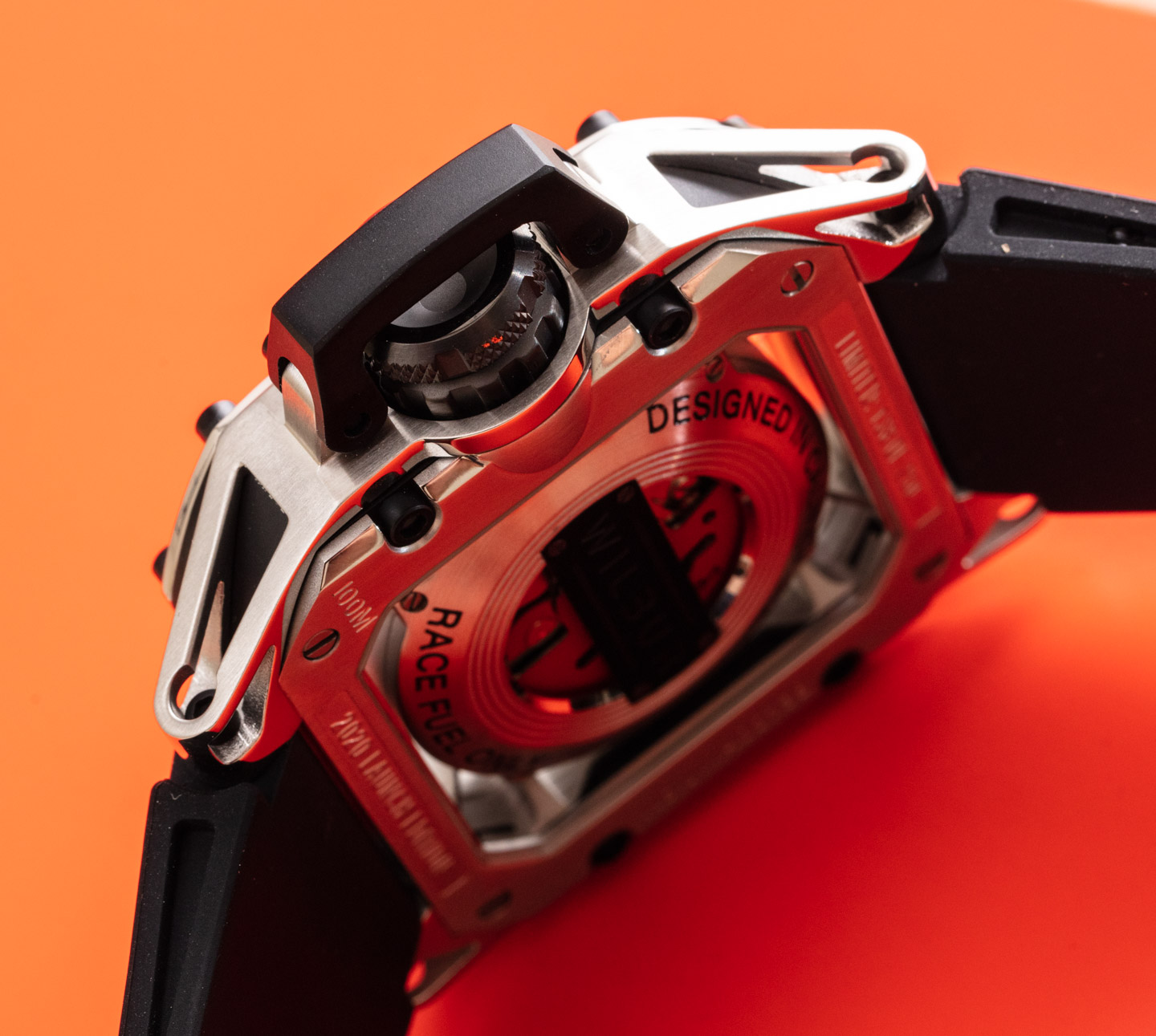 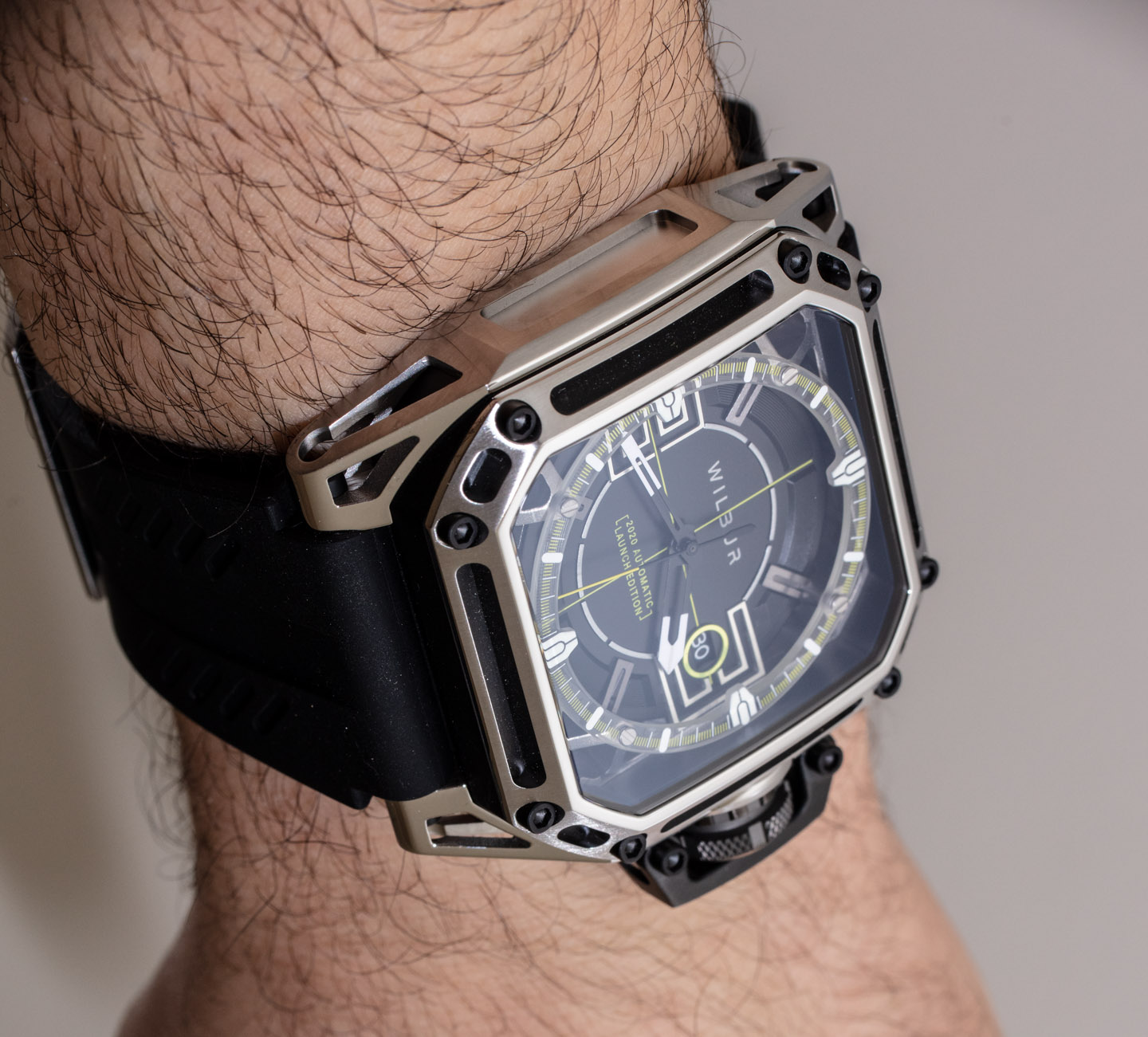 The JWA watch (with its electric lime-green dial accents) plays with the concept of space and size in interesting ways. The polished steel case is 44mm-wide (not including the crown and guard which, together, make it about 56mm-wide), 16mm-thick, and had a roughly 54mm lug-to-lug distance. The case is big and heavy, but that doesn’t mean it isn’t comfortable. The case is ergonomic, even if it looks a bit too large on your wrist. It also doesn’t jab into your wrist as it might appear in images. As long as you can wear the Wilbur watch snug on your wrist, it should prove pretty comfortable.

The steel case here is in all-natural steel, but DLC-coated black versions are also available. The case is also water-resistant to 100 meters and has AR-coated sapphire crystals over the front and back. Reading the time is an exercise in visiting Mr. Wilbur’s “video game interface” design mindset. The techno punk theme is rich with layers and feels like it would be ideal for a science fiction movie prop – if only the piece were not so obviously trying to have fun as a design item. 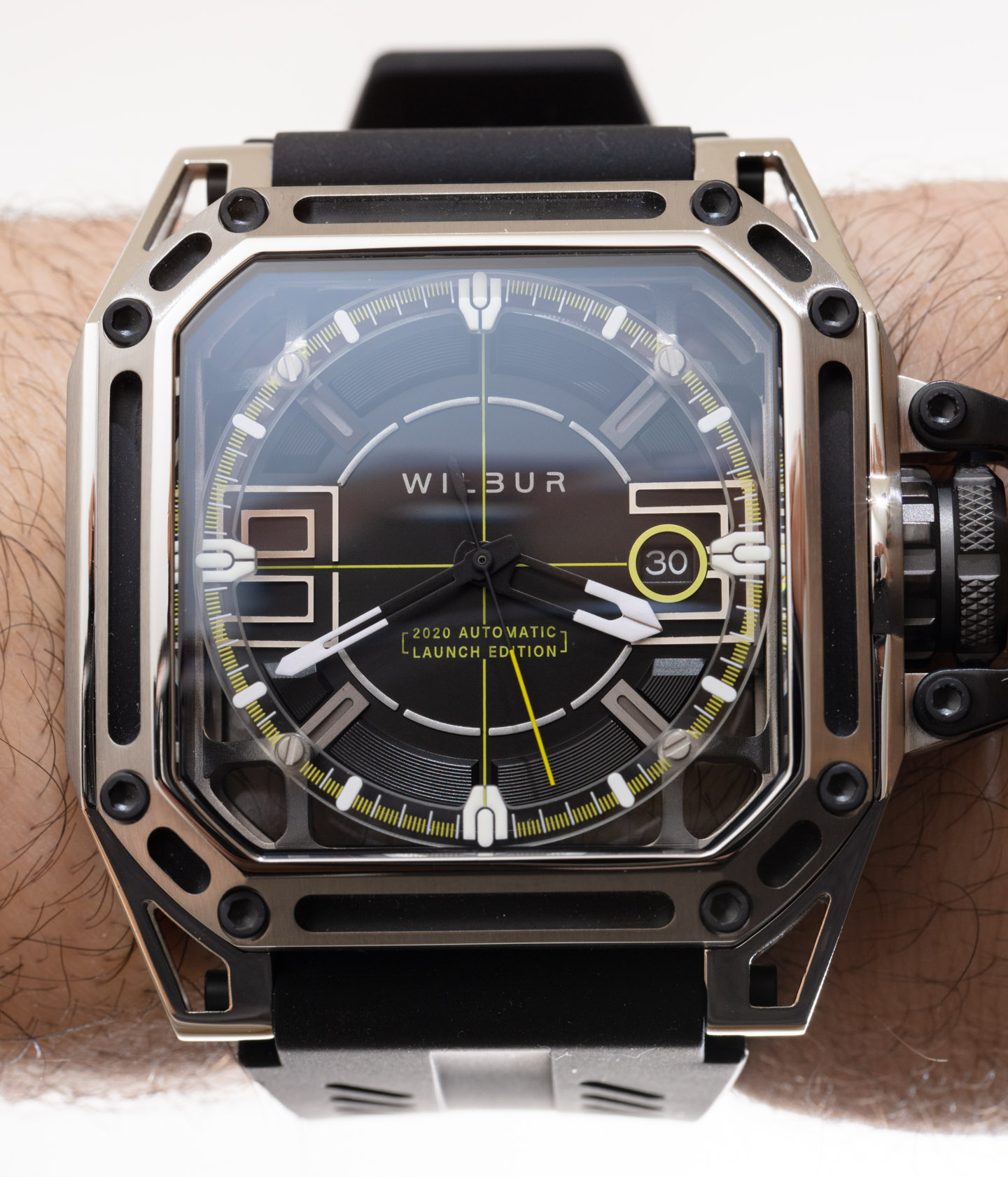 Suspended in the middle of the case is a section holding the movement. The sharpest criticism one can lob at the Wilbur 2020 Automatic Launch Edition watches is that they use a relatively ignoble movement. Not that anything is wrong with the Japanese made Seiko Instrument caliber NH35A, but there is also little “luxurious” about it. The rank-and-file 3Hz automatic movement is used in a large number of watches today and is a true “workhorse” by most mechanical standards. Wilbur insists that the NH35A was chosen because he wanted this movement, and it make sense from a size and performance standpoint. That may be so, but collectors are a prideful bunch, and it will take just that much more prodding to get finicky enthusiasts to purchase if the movements don’t immediately pass snob muster.

In my experience, the presence of a Japanese versus Swiss movement doesn’t really matter. The movement presentation is not bad with the custom red-colored Wilbur rotor, and the movement doesn’t have any trouble moving the properly sized hour, minute, and seconds hands. Jason even designed a window for the date on the otherwise complex three-dimensional dial structure. 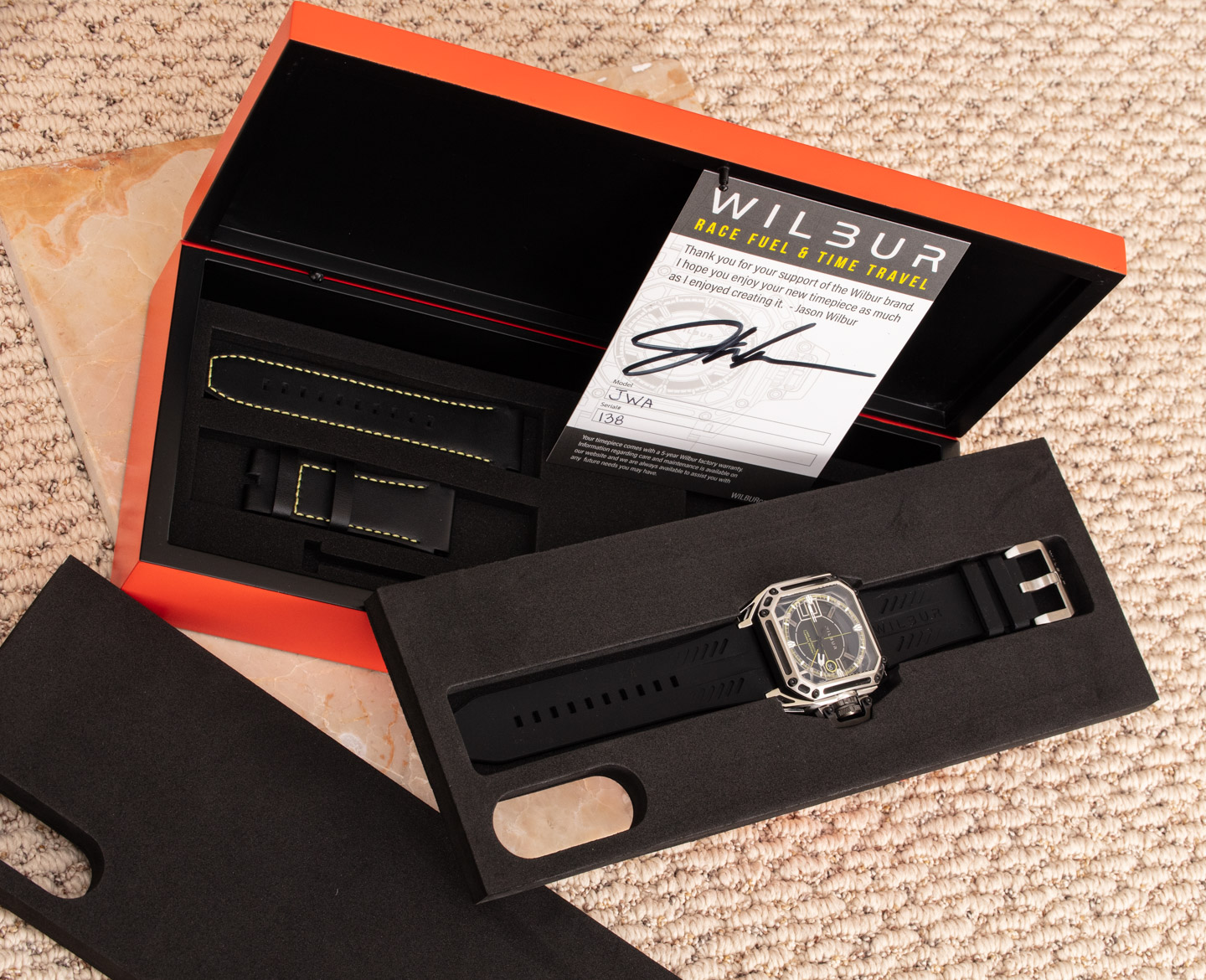 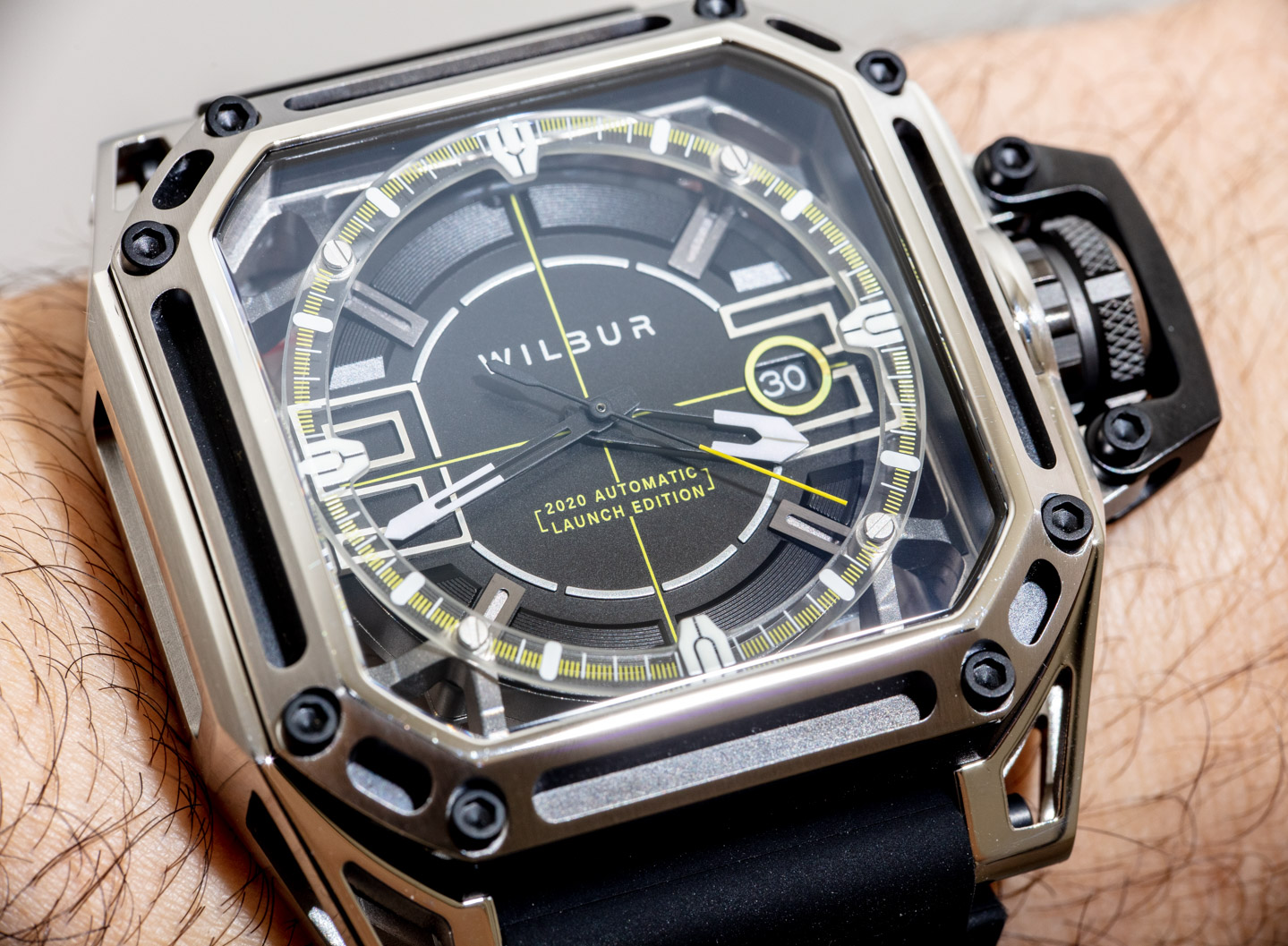 The rear of the watch makes two things clear about this watch — each is an aspect of Mr. Wilbur’s personality that I mentioned above. “Designed in California” is a statement that Apple probably made popular, but it helps add credibility to the state’s “novelty creator” reputation. California is a hotbed of new ideas and cutting-edge automotive design, and this is where the “Race Fuel Only” statement comes in. This automotive-to-horology creative migration is the same school of thought that spawned a large number of popular European watch designers. Thus, the car/watch crossover in California is simply an American extension of a common practice already occurring back in Switzerland for some time now. This is probably why Jason Wilbur’s designs feel so competent, even though they are entirely non-traditional.

The look of the watch on the wrist really sums up the personality that wearing a JWA watch gives you. It’s macho without being violent, and it’s bulky without being staid. The “see-through” sensation of this otherwise big watch is really fun and something you can really only appreciate if you handle it. Wilbur is also not unfamiliar with his designs being polarizing. It is guaranteed there will be as many people who don’t find his work to their taste as there will be hungry zealots who feel Wilbur is seemingly creating watches with customers like them in mind. 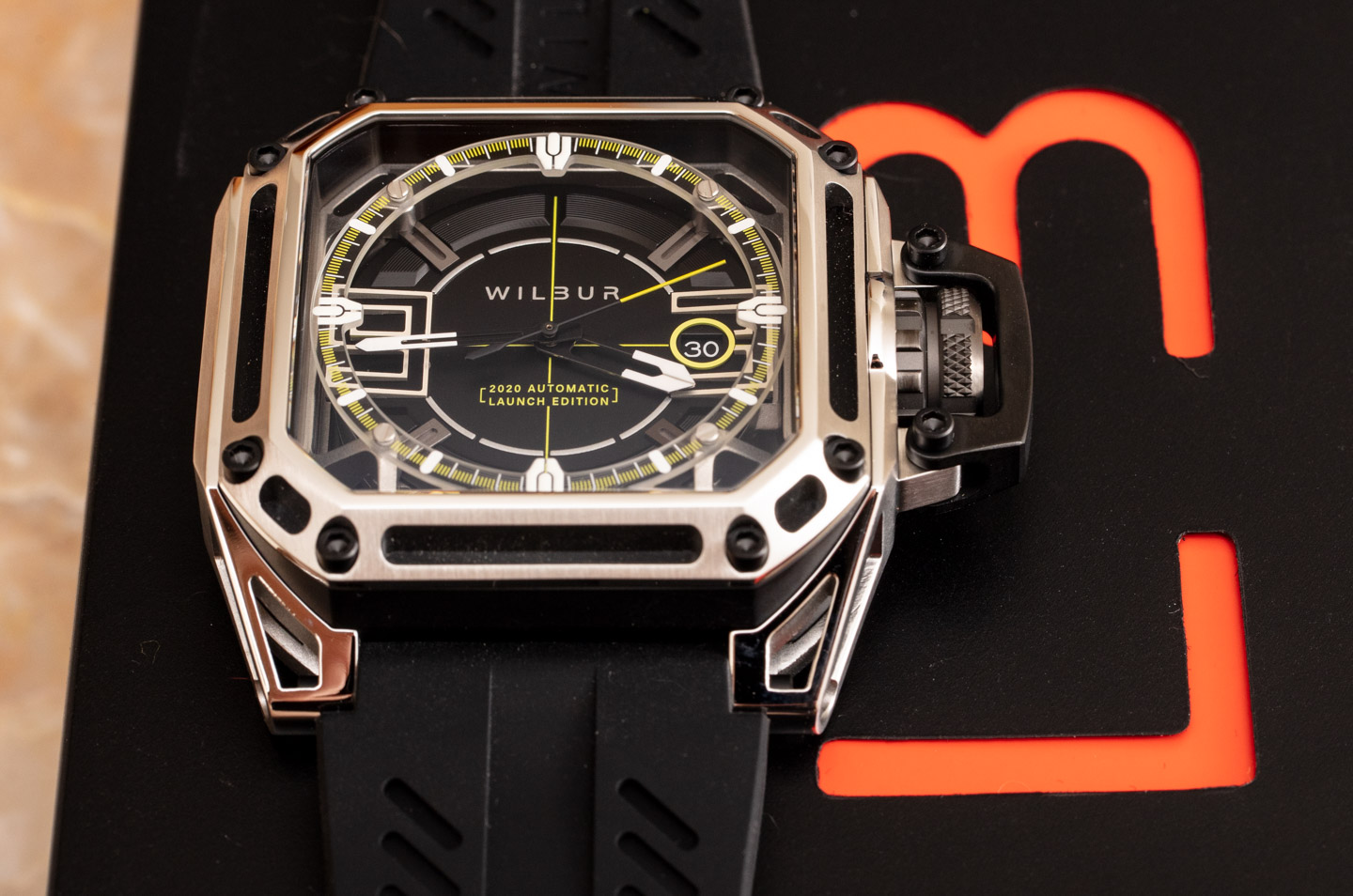 In addition to pretty fancy packaging, the JWA watch comes with both a comfy black silicone strap (I would have preferred rubber, but tooling costs for the molds such custom-designs need are very pricey) and a black leather strap (here with appropriately matching stitching).

Each of the Wilbur 2020 Automatic Launch Edition watches will be limited to sets of 250 pieces each. The price isn’t cheap, but for the amount of watch, it isn’t high either. This isn’t a situation where you are buying a fancy movement in a basic case. Rather you are buying loads of custom parts and years of prototyping with a simple but competent movement inside. Price for the Wilbur 2020 Automatic Launch Edition JWA watch is $2,700 USD. Learn more at the Wilbur Co. website here.