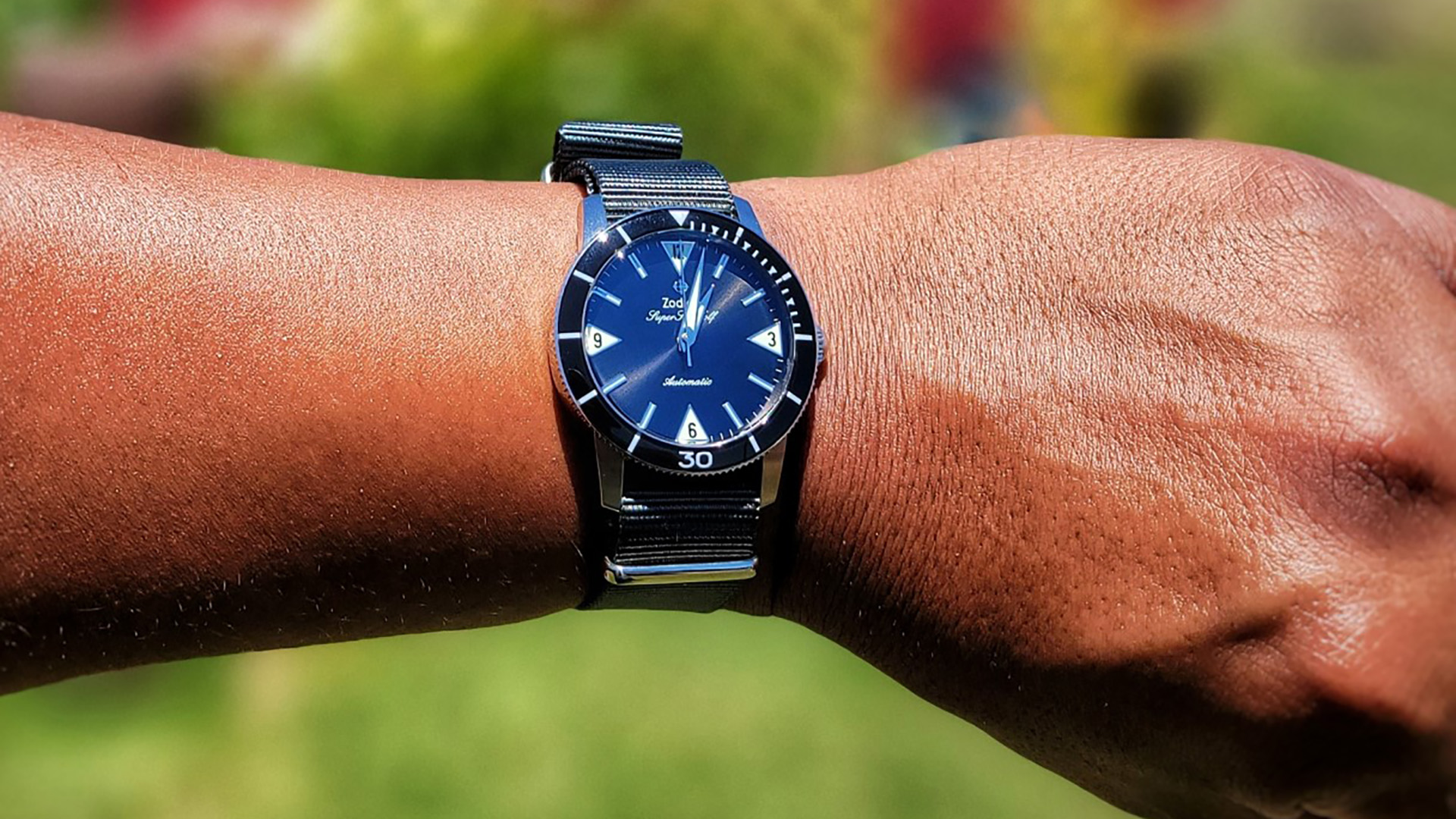 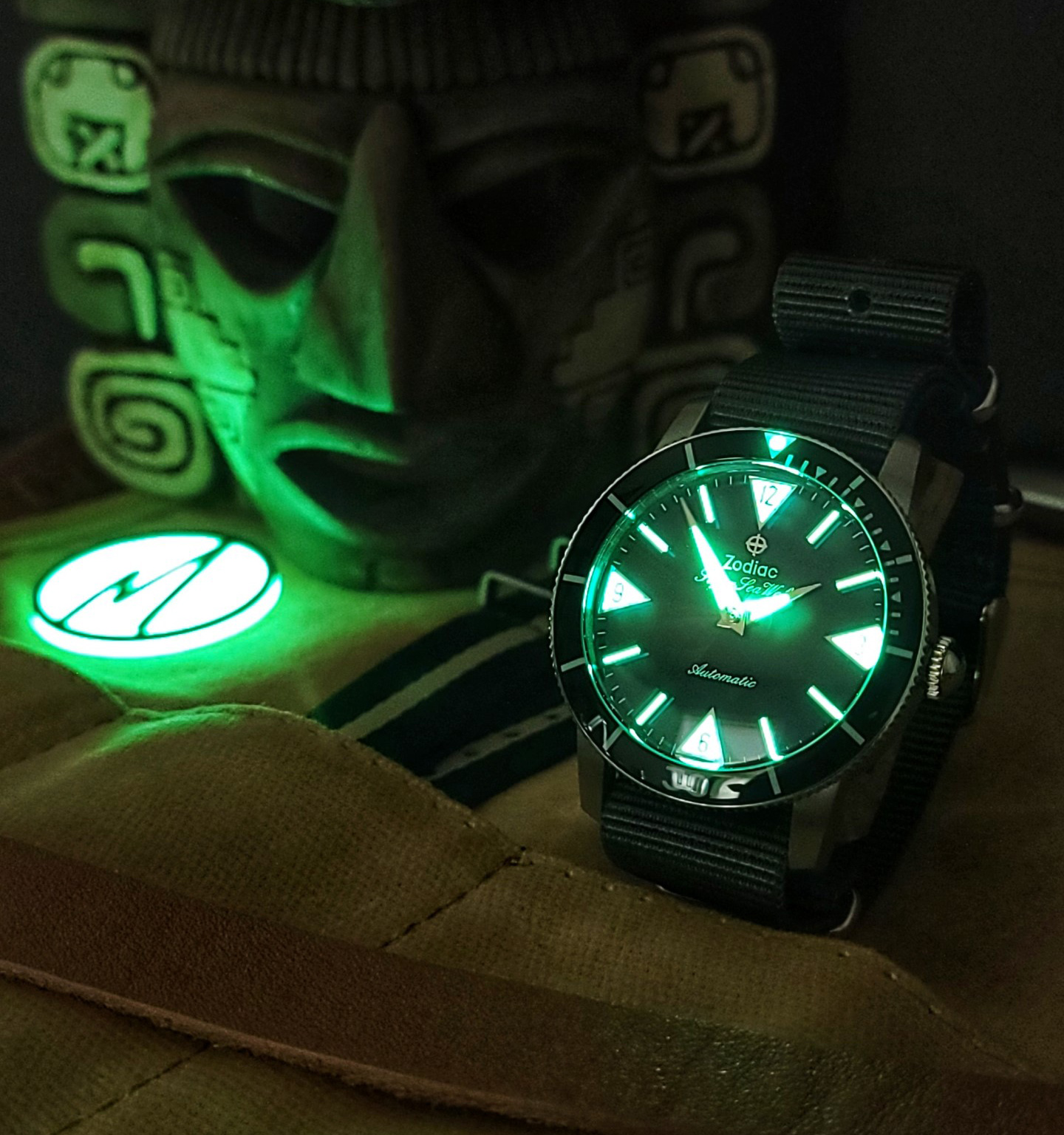 Editor’s Note: Today we’re happy to feature a guest review by Jason Nofsker, creator of Watchrolling.com and a U.S. Navy veteran. Jason brings his own unique military perspective to this review, offering enthusiasts a point of view that goes overlooked far too often even as military-style timepieces remain hugely popular.

As a relatively new yet enthusiastic watch collector, as well as a retired member of the U.S. military, I was recently enlisted to help a good friend purchase his first timepiece – a Zodiac Super Sea Wolf Z09209. My good friend, whom we’ll call “T,” is currently on active duty with the U.S Navy. His family’s military legacy is storied and can trace its lineage across three generations of U.S. Navy Submariners. T and I work in the same circles and, as such, he has been a sounding board for me as I’ve grown in my watch-collecting journey. As our conversations evolved, T became increasingly interested in obtaining his first timepiece. Some specific criteria were clear: It had to be a tool, be utilitarian, and be capable of handling a modern active-duty lifestyle. 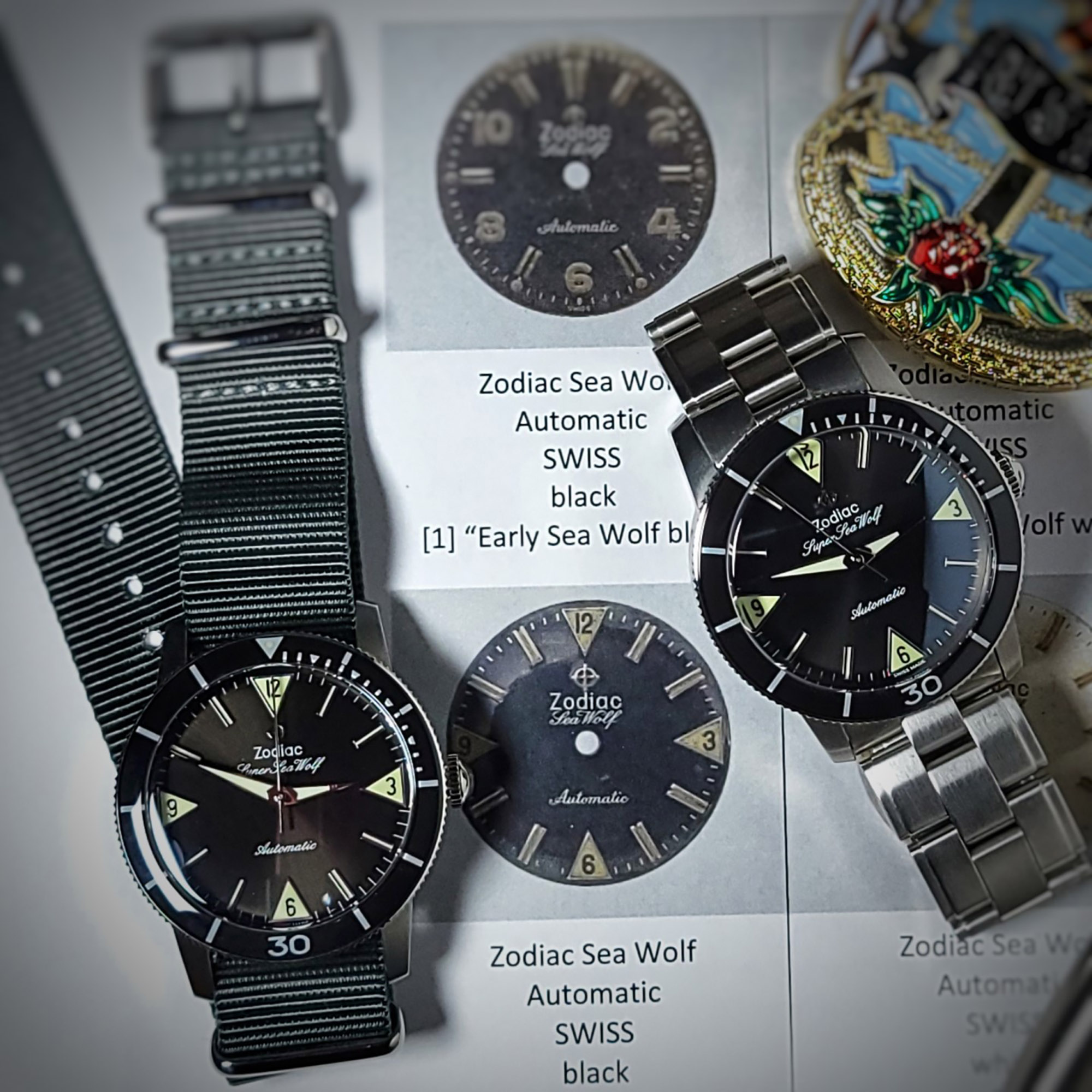 I offered to go with him to check out what was available at the Navy Exchange. The Navy Exchange is one of a series of exchange stores that provide quality goods and services at a competitively low price to all branches of the military. They are designed to provide one-stop shopping for most items one would usually have to go to multiple stores to get. It‘s a no-nonsense type of store that provides no-nonsense solutions. It’s with this practical mindset that most military members choose a timepiece. I could go into the current state of affairs with Apple watches, Garmin smartwatches, and operational security concerns, but that is best left for a separate article. That said, I still see many sailors wearing the tried and true (especially during my time serving) G-Shock. Military members wear G-Shocks because they are durable and dependable; some units are even issued these watches. They are also readily available at most military exchanges. In our initial conversations, I mentioned the G-Shock to T, and he was not interested in them. Armed with this knowledge, I offered to accompany him to go with him to look at some options. One day after work, we met at the Navy Exchange and looked over the usual suspects: a Seiko Prospex, Rado Captain Cook, a Bulova chronograph, Longines V.H.P., and so on. T liked most of them, but didn’t love any of them. Then we stumbled across the Zodiac Super Sea Wolf ZO9209. T tried it on and was hooked. Its simple yet refined design, legibility, and sleek dimensions were instant draws. We knew of the Zodiac brand but didn’t know much about the ZO9209 — we soon learned how special it is. 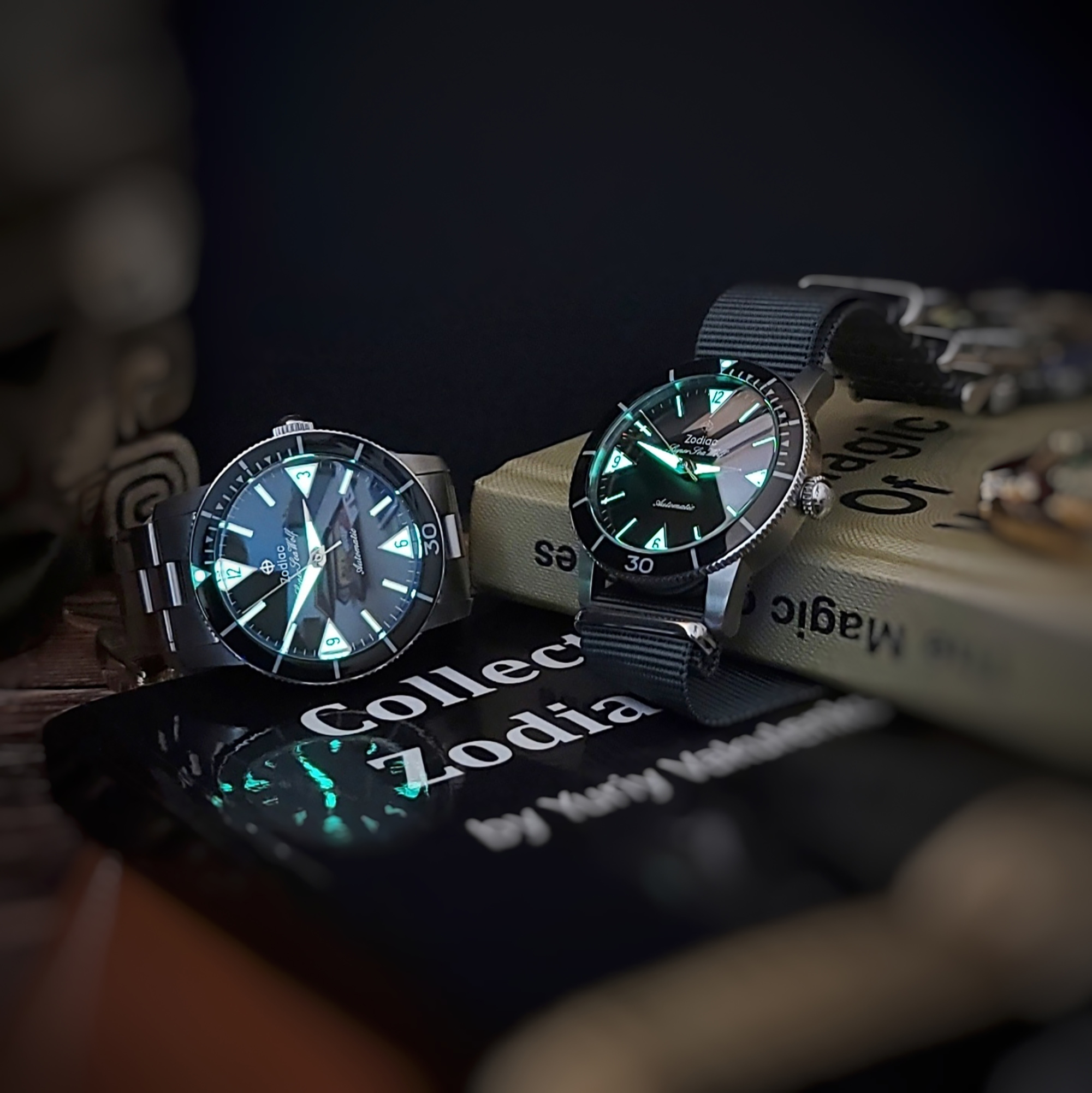 The ZO9209 is sold primarily in post exchanges and at authorized watch dealers.  The ZO9209 is a standard three-hand dive watch with a rotating bezel. The case and bracelet are the industry standard 316L stainless steel and come with a screw-down case back with “Super Sea Wolf” engraved in an elegant script that matches the dial. Speaking of the dial, it is a beautiful black sunburst dial with hints of gold. It’s captivating. The timepiece is 40mm in diameter and 11mm thick, and it wears like a dream on my 7 ½-inch (19.05cm) wrist. With a 20mm lug width and 200m of water resistance, the ZO9209 looks great on either a bracelet or leather strap, and it flows seamlessly from the surfboard to the boardroom. 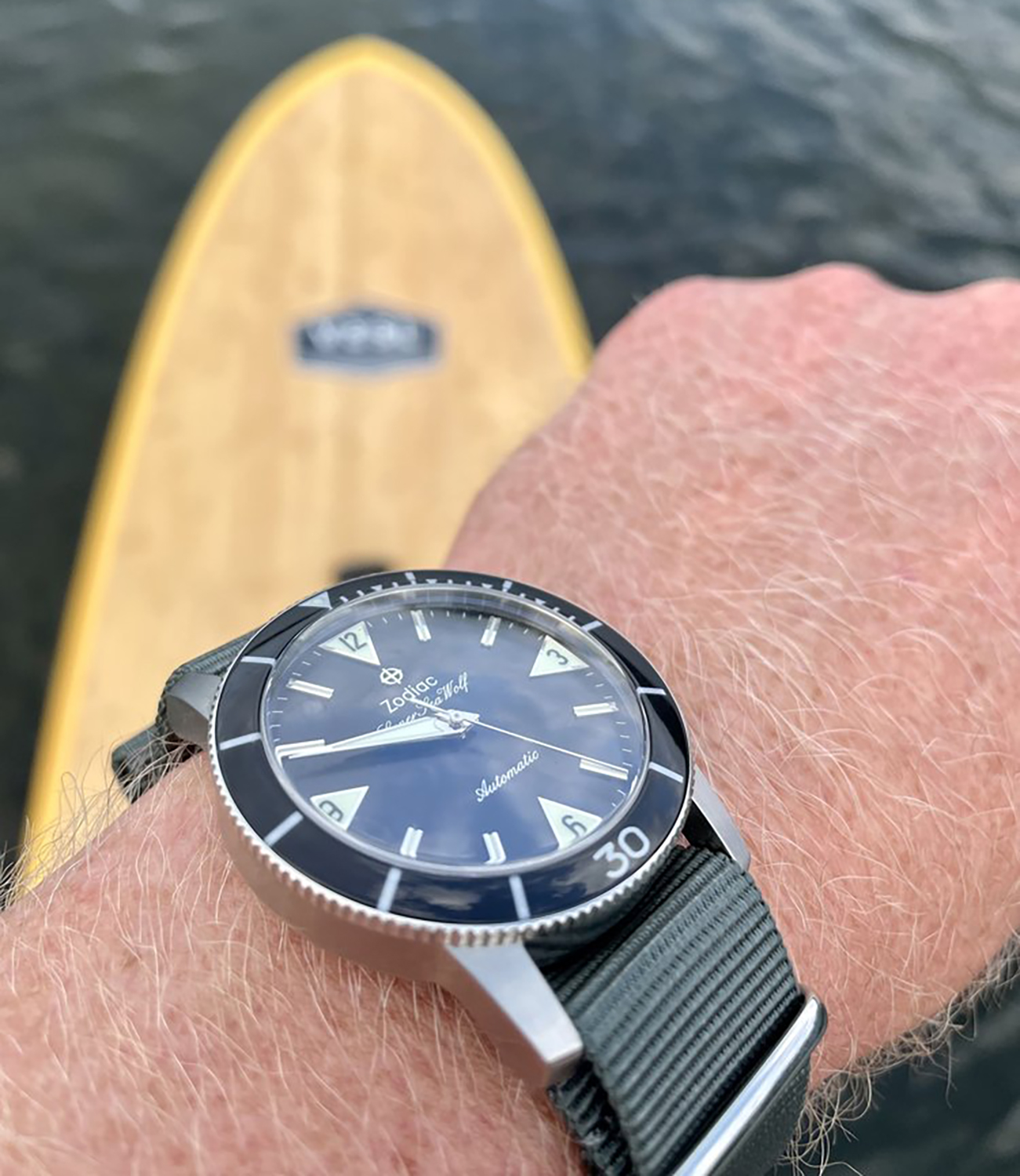 The ZO9209 is based on models sold in military post exchanges (PX) in the United States and Southeast Asia during the Vietnam War. American service members came to trust the build quality and reliability of Zodiac timepieces, and in areas as diverse and daunting as the Central Highlands and Mekong Delta, that’s saying something. The design caught on in Vietnam due to its capable and rugged design. Zodiac’s capability and dependability during Vietnam War earned it a staunch reputation. Its heritage, coupled with a modern design and construction process, made it an easy choice for T, and that decision quickly worked its way into the rest of our watch-collecting journeys. Fast forward a few months, and T has put the ZO9209 (this thing needs a nickname; more on that later) through its paces. T has taken the ZO9209 from the engine rooms of U.S. Navy ships to the Sandbridge surf break, and the Super Sea Wolf has met all challenges. It has become his go-to timepiece. 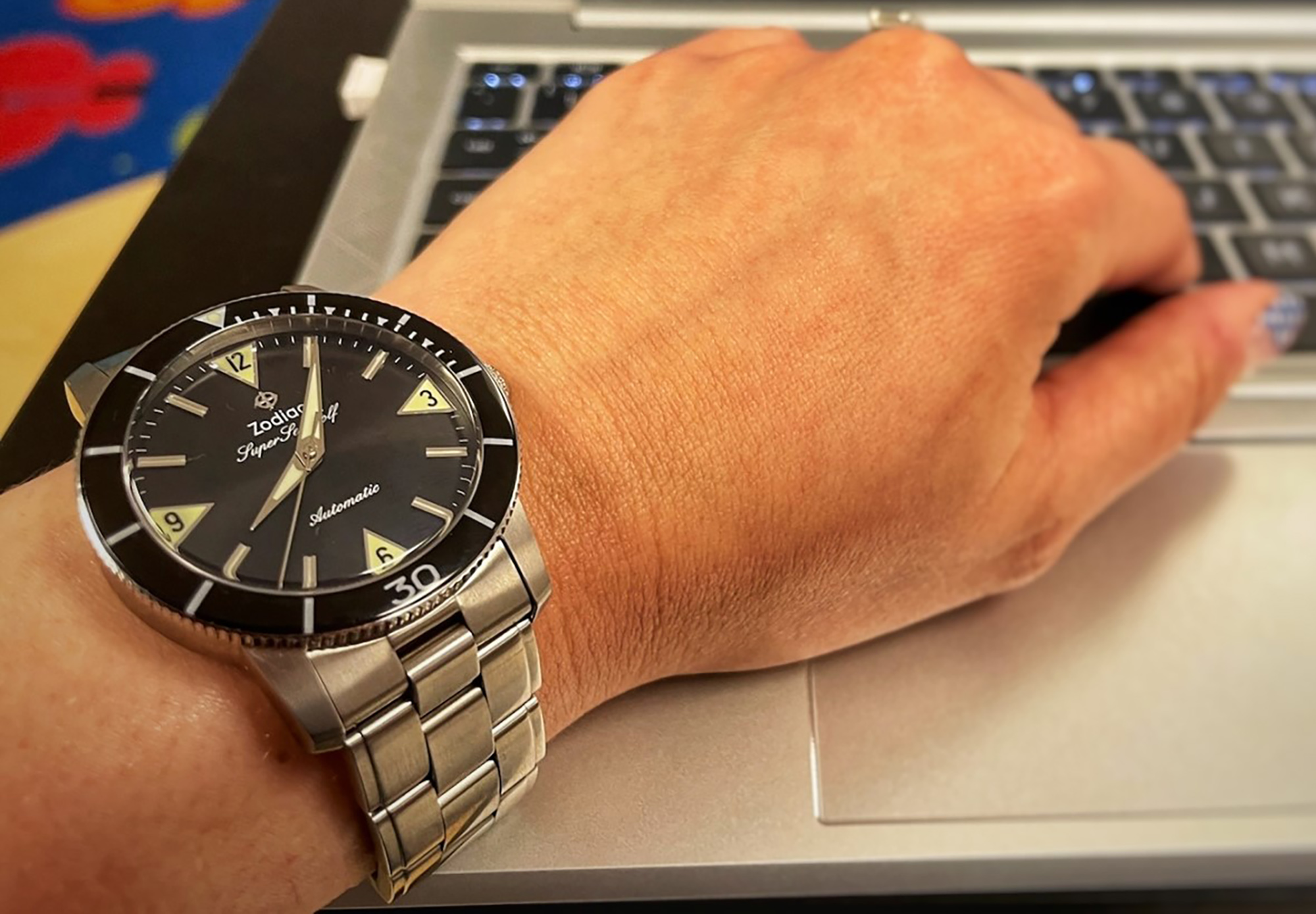 In the meantime, I have since gifted my wife and myself each a ZO9209. My wife is part of a large military family and is also a teacher. While she loves sporty watches, she often has difficulty wearing them due to her 6 ¼-inch wrist. That’s not the case with the ZO9209. It provides presence without being too big, and she loves the balance of the dial design. The kids in her class love it, and she appreciates the fact it isn’t a distraction as checking a smartwatch or phone can be during class. Her students also loved learning to use a dive bezel timer for their activities. 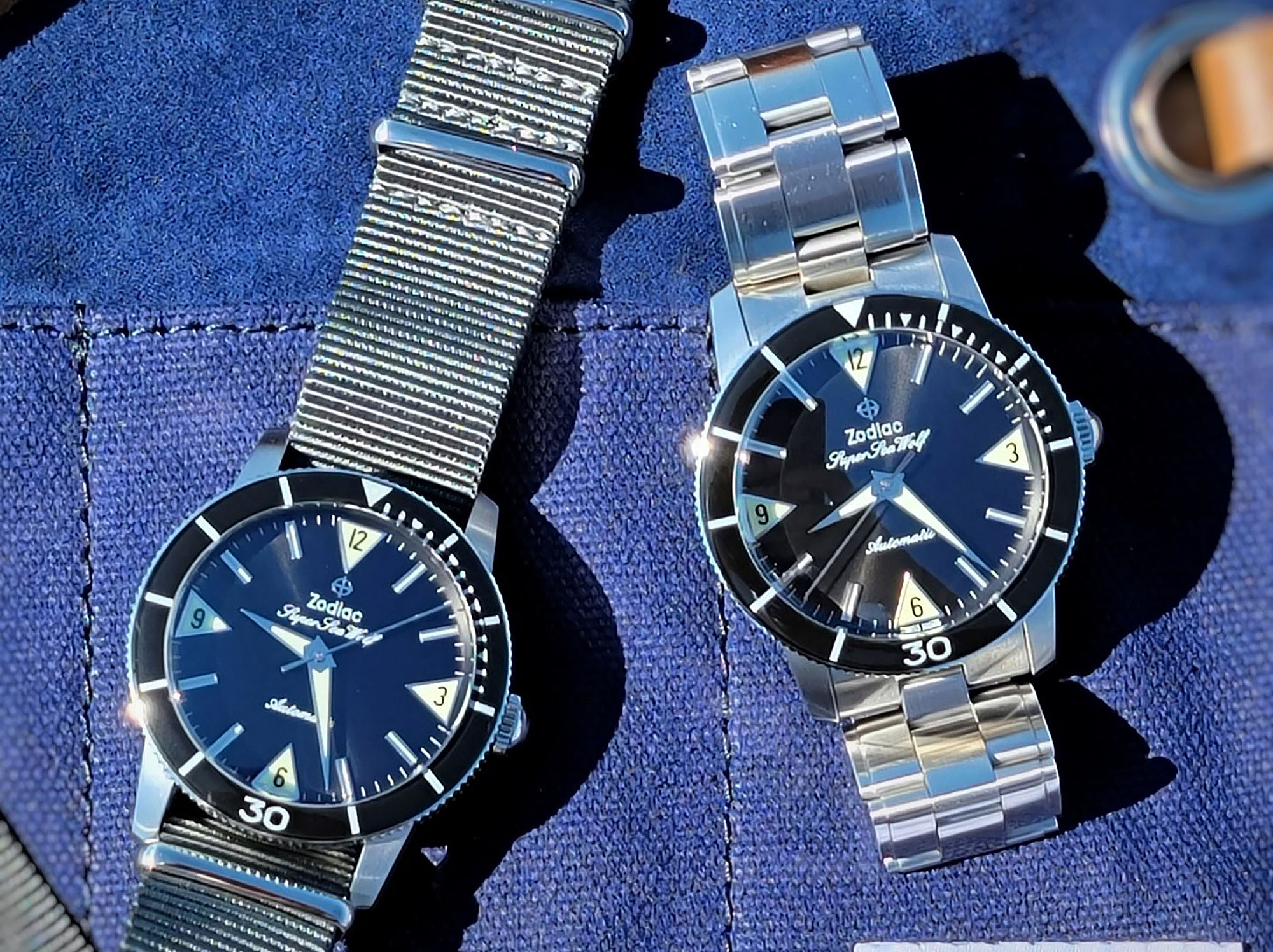 I round out this Navy family, having served twenty-plus years in the surface fleet. All of us have the Navy in our blood, which plays a huge part in our expectations of people and the tools we use. It’s a unique perspective, really, and one that is difficult to put into words. Being the inaugural member of our watch-collecting family has been fun, but is not without pressure. I want to help them make the best decisions, especially since this hobby can get expensive quickly. Nobody joins the military to get rich, and don’t even get me started on teachers’ salaries. But I digress. All told, we are on the watch collecting journey together. We each have different tastes, and our respective collections reflect that. The coolest part is that we now speak the same language, can appreciate each other’s opinions, and celebrate our watch purchases together. It’s an exciting place to be. 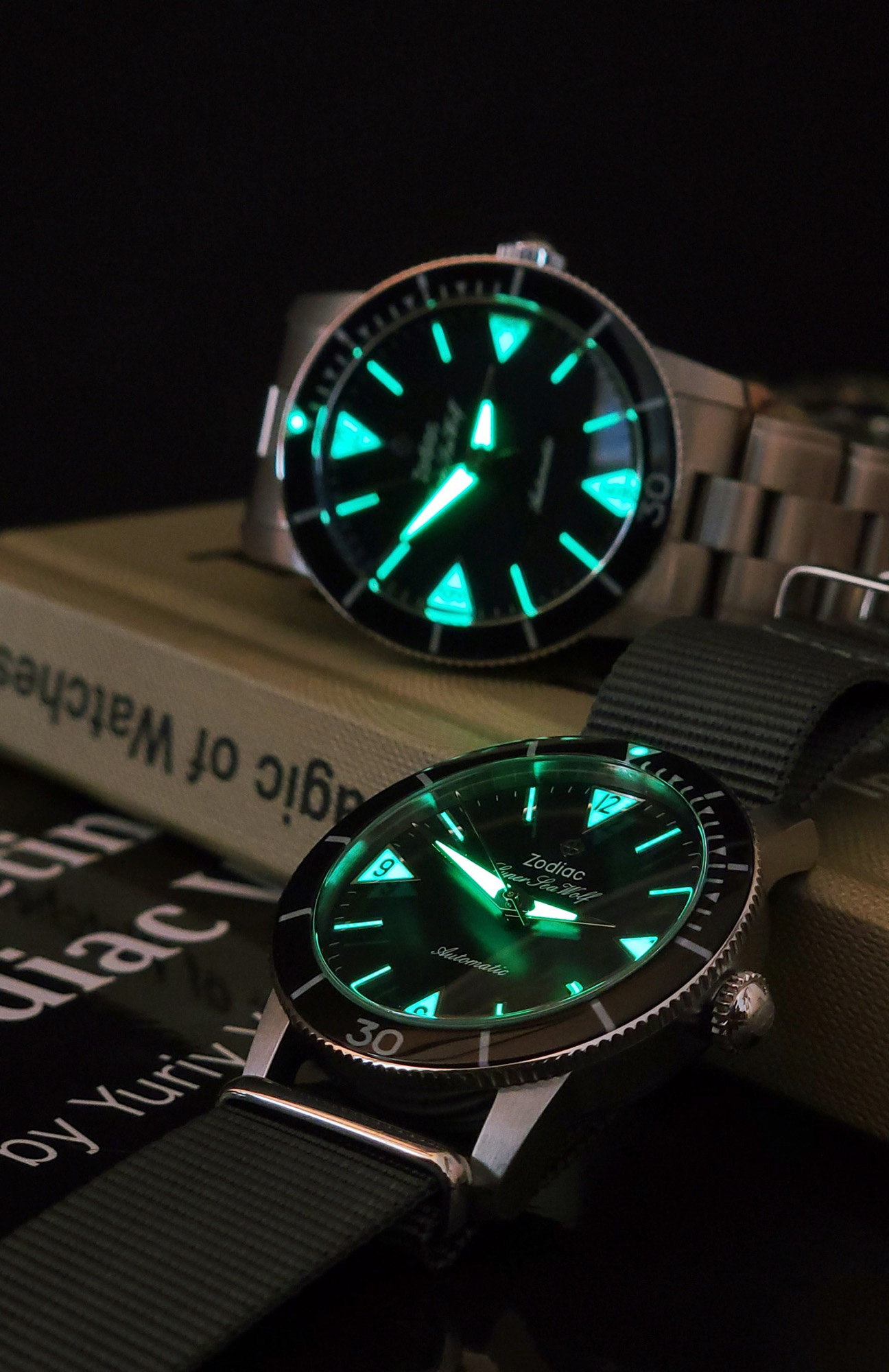 As the military becomes more and more technically advanced, it has been interesting to see T choose a timepiece that bucks that trend. I wonder if it is something more service members are doing. There have recently been issues in the military with Apple watches, Garmin smartwatches, and data/GPS exploitation. I know this was also a concern for T and a consideration in purchasing the Super Sea Wolf. In the Super Sea Wolf, he’s found a timeless solution to a modern problem and not one that I think most civilians consider. In the military, especially in the Navy, we love our tools, especially the dependable ones. We don’t baby them, but we try our hardest to maintain them. We need them to work the first time as we often might not get a second chance. Tools not properly vetted can cause irreparable harm, and in the military, we have too many true stories to draw on to demonstrate that. It feels good knowing that T is continuing to serve with an excellent tool on his wrist. For civilians purchasing this timepiece, I can see how its military heritage has appeal. As a veteran, I ask you to look deeper than that. Consider what is on your wrist. Think about the men and women who have worn a similar design in the past, present, and future. The Zodiac Super Sea Wolf and other military-linked tool watches are cool due to the blood and sweat of those who wore them when it mattered. The MSRP is $1295. Learn more at the Zodiac website here.

Jason is the creator of Watchrolling.com,  a veteran-owned podcast that focuses on watch collecting with the goal of helping fellow veterans. His three-part review of the Zodiac Super Sea Wolf ZO9209 titled “A Pack of Wolves” can be found at WatchRolling.com.