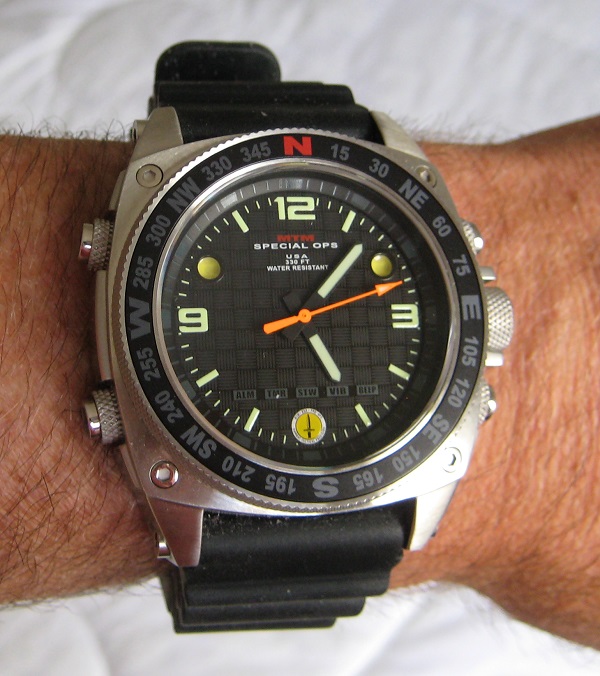 I was very pleased to hear that I had won the MTM Special Ops Silencer from aBlogtoWatch and am grateful for the opportunity to share my impressions of this timepiece. I selected the silver model being a traditionalist and was not disappointed when it arrived by FedEx.

I opened the shipping box to find the MTM Special Ops box which contained the Barracuda case (which is waterproof) and which provided an extra layer of protection. The watch was also encased in dense foam. Inside were the watch, warranty card, manual, dog tags, link removal tools, two extra link pins, and induction charger.

The first impression, once removed from its confines, was the feel and weight. This is a substantial timepiece, solidly built and definitely not for the weak of wrist. The other noticeable aspect is the girth or thickness of the watch. The casing is made of titanium and is 15.4mm thick whereas my daily wearer, an Omega Seamaster Professional Titanium, is only 11mm but without the features found in the Silencer. Regardless of the thickness, this watch could be worn on different occasions and even pulled off under a cuffed dress shirt. 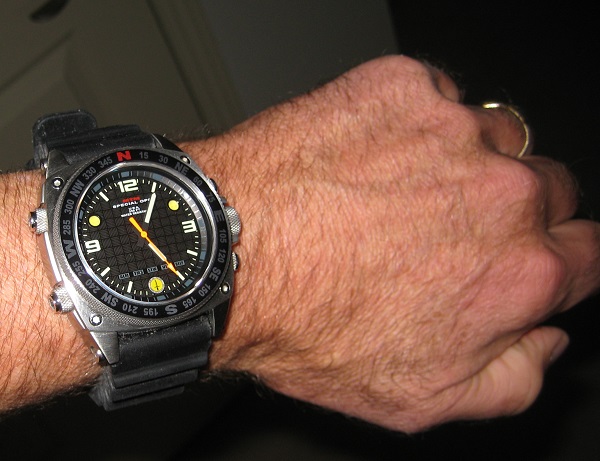 After reviewing the manual, it was time to adjust the band to size. Which, by the way, is well put together and would be almost impossible to rip off someone’s arm.  I especially like the fact that there are two hex pins for each link, so even if one came off the bracelet, it would likely remain intact. The hex pins are screw-in with a rubber gasket. The adjustment was easy and the instructions clearly laid out. Keep in mind there is a sequence to follow in removing the links as they vary in size which is not readily visible to the naked eye. The bracelet has a double clasp system like the Omega and a fold over which, in my opinion, doesn’t fit the curvature of the bracelet and sticks out a bit too much and could get snagged on something.  One of the tools supplied (the allen key) was too small so I had to use the hex screwdriver to remove the pins.

The time (analog & digital) was easy to setup as were some of the other features like, alarm (beeping & vibrating), timer, and stop watch.  The LED light and strobe are two surprise features that I could see using in an emergency or under adverse conditions.

Accessing the pusher to activate the features does require a fine touch as they can stick or become difficult to lock or unlock. To my misfortune, the pusher at 5 o’clock wouldn’t lock so I took an allen key to it only to learn that the face opening on the pushers is cosmetic only.

On the plus side, the customer service at MTM has been nothing but stellar, they are easy to reach and have called me long distance to ensure that I was satisfied. MTM has done a great job marketing their brand and one of their watches is featured in yet another action movie which also has a giveaway ending May 1st.

The brand is becoming well known and I have had discussions about MTM with folks in Calgary which was somewhat surprising to me. I also noted that several retail stores in the U.S. which carry MTM Special Ops watches, were sold out. A credible sign and acknowledgement that these watches will be around for a while.

In conclusion, the watch and its features are impressive and I plan on making it my daily wearer. I have also ordered a rubber strap to change up the look and see if that moderates the weight downward. I am also contemplating the purchase of a titanium model with tritium markers. Check out the MTM website as they have an ever changing selection of watches which, in my opinion, offer very competitive pricing for what you get.