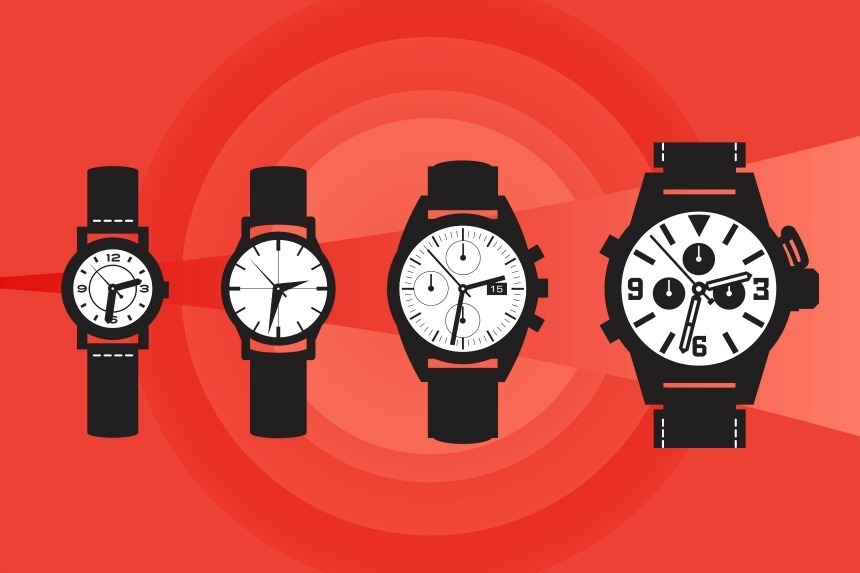 Why are watches today so big? That is a question we at aBlogtoWatch get asked a lot – and it is a typical source of conversation (and contention) among people who like watches. It is true that wrist watches today are larger than they have been historically, but perhaps not as large as they were a few years ago. What we are talking about is mostly the diameter of a watch case (usually measured in millimeters) and to an extent the thickness of a case.

How do you define a “big watch?” There is no specific size at which a watch becomes “big” or “massive” or “small.” Though, I will say that people started commenting on large watch sizes when timepieces measuring 44mm wide from companies such as Panerai and others started to become popular in the early 2000s and, to a degree, the late 1990s.

In the 1990s, the typical size for a men’s watch was in the 37-39mm wide range. A few years later that size went up to 41-44mm, and by the mid 2000s it was common to see watches sized from 45-48mm wide (and even larger). Historically men’s watches were perhaps 35-37mm wide, though in the 1970s we did see a lot of larger men’s sport watches. It is true that over time there has been a gradual trend to increase the size of men’s watches, but starting in the early 2000s, that trend rapidly accelerated.

Even though many of the aBlogtoWatch writers are fans of large timepieces the purpose of this article isn’t to defend them or convince you to wear one. Our goal is to explain the reasons why timepieces for both men and women have become larger, and help consumers feel comfortable with the watch sizes that they prefer. 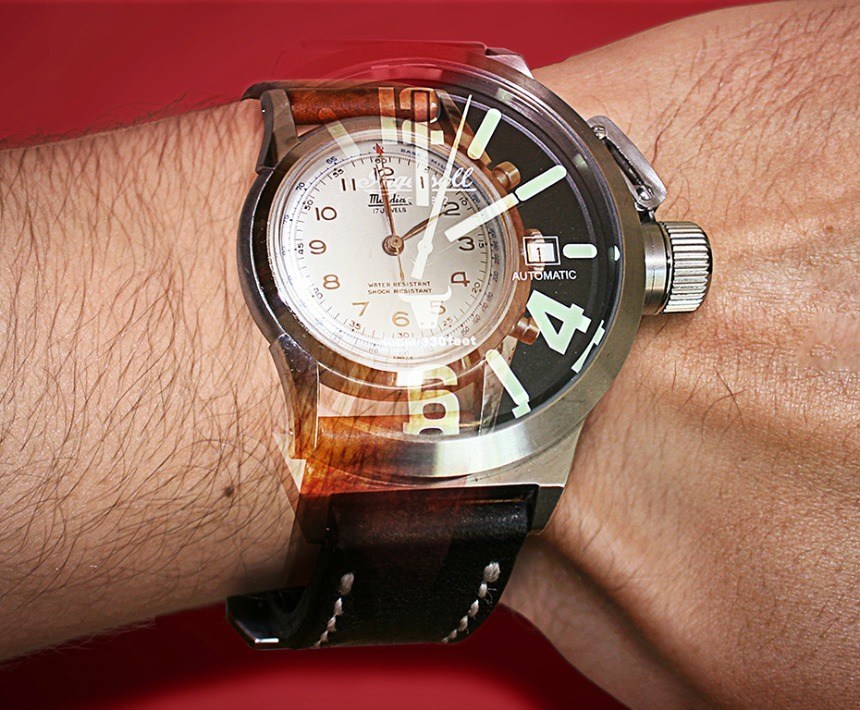 Watch lovers literally argue about the “proper” watch size. People who like comparatively larger watches say that smaller-sized watches look like timepieces for women or boys, and people who prefer smaller-sized watches complain that large watches look silly or indicate that the wearer is trying to compensate for something. The bottom line is that members of each faction are literally insulting one another on a regular basis in an on-going debate. That is how passionate people are about this topic.

The watch industry often uses the term “oversize” to indicate that a watch they are producing is larger than “average.” While there is no “average size” any longer, they are referring to the size of their watch in comparison to traditional sizes of 40mm wide and under. We won’t use the word oversize because we don’t like the term oversize. aBlogtoWatch fans have heard me complain about this before, but the term literally means “too big.” If it is too big, you can’t wear it. Thus, an oversize watch is a watch too large to wear – and logically speaking, you can’t actually refer to a watch you are wearing as oversize if it actually fits. So, if you see this term being used, you know what it means, and now you know why we won’t be using it ourselves. 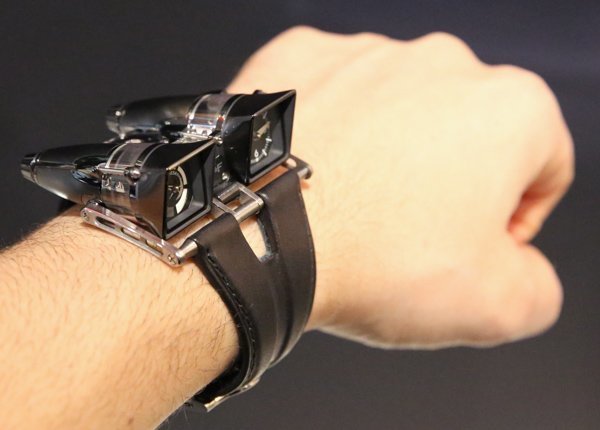 Large watches are a big issue because they make it difficult for people to wear “traditionally sized” watches. Often times “larger watches” are also called “modernly size” or “contemporary.” Vintage watches are often smaller and thus often don’t conform to modern size taste. In any event, this watch size issue is a huge source of debate among watch wearers.

So why all the fuss and what does it mean for you? It really comes down to personal taste, as we will discuss, and there is no correct or incorrect watch size. There are, however, certain rules to see if a watch is too big for your particular wrist. The first thing to do is put on a watch and see whether or not the lugs stick out past your wrist. If your wrist does not have enough real estate space for the watch to fully sit on, then in our opinion the watch is too large for your wrist. If the watch – no matter the size – completely sits on your wrist from top to bottom, then you can technically wear it without breaking style rules. It is also a good idea to make sure that the crown of a watch doesn’t jab into your wrist while wearing it and moving your hand around.

So if a watch passes the above test then have no qualms about wearing it. The bigger issue is the emotional element, and deciding whether or not a watch is worth showing off as much. 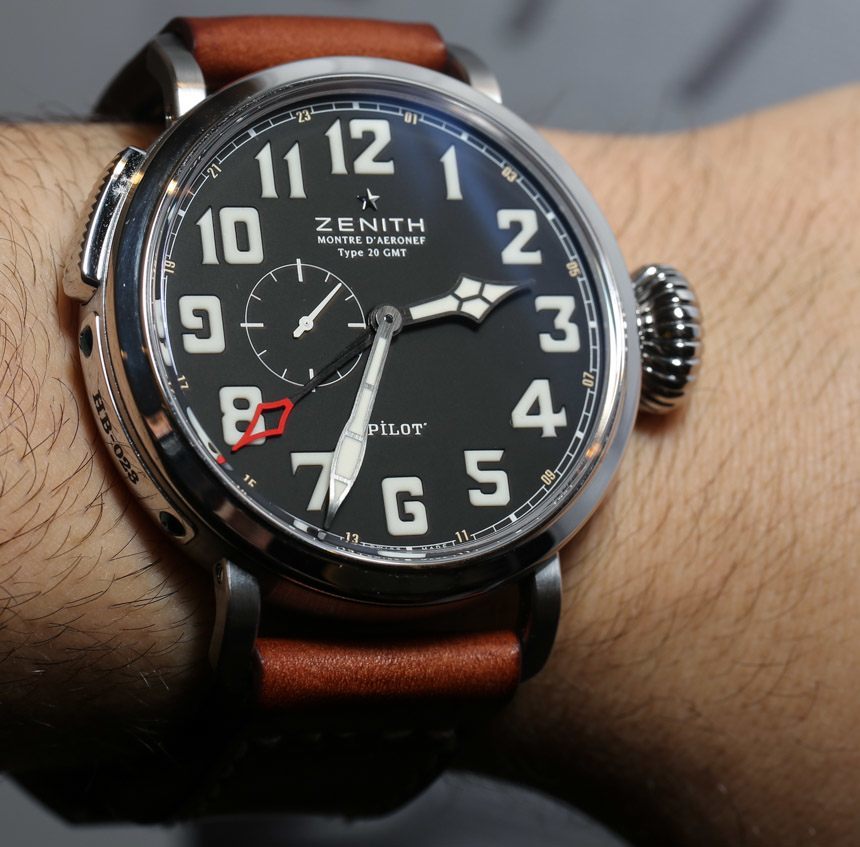 With its 48 millimeters width, large indicies and protruding crown, the Zenith Pilot Montre d’Aeronef Type 20 offers plenty of real estate to show off the aviator inside of you

Space To Show Off

In the late 1980s the mechanical watch was slowly coming back into fashion after the quartz watch market more or less killed it with cheaper prices and superior timing accuracy. Swiss watch brands were able to rebound (in a manner of speaking) by upgrading the status of the mechanical watch to being a luxury item versus a utility item. Case designs and quality improved, and by the 1990s timepieces were more than ever a status symbol and designer product versus mere tool to indicate the time. This meant that more emphasis was being placed on people seeing you wear a watch versus just the wearer being able to see it.

Further, as watch case and dial design became more complex, it was increasingly desirable for wearers to show off the artistic and decorative value of their watches – which meant that larger cases and dials were increasingly of interest. More so, as (mostly) mechanical watches became luxury items, watch features often increased in complexity. Thus, brands needed more dial real estate for the many complications that were becoming more and more popular compared to the traditional popularity of mostly time-only watches.

Therefore, one major reason for the overall increase in watch size is that timepieces became much more of a visual status symbol, and because watch designers began to offer increasingly complex designs that merited larger case sizes to show off.

Once You Go Big, You Don’t Go Back

Size is a funny thing, and once someone buys a larger car, larger home, or bigger television it is difficult to return to a smaller size. The same is true with watches. When I first started getting into mechanical watches I was buying timepieces sized from between 36-40mm wide. Today I barely wear anything under 42mm in width. Once I began to wear larger timepieces smaller ones seemed petite by comparison, and the same is true for many people who go from more traditional watch sizes to modern ones.

The funny thing is that sometimes when I go back to wearing a smaller watch, I recall what I am missing. But the sensation is bitter sweet. On the one hand, I appreciate the diminutive nature and comfort of a 40mm wide and under timepiece (especially because you don’t notice it as much), but I also miss the visibility and boldness of larger diameter watches. The bottom line is that once most people begin to wear a larger watch, in the 42-44mm wide range and above, it becomes very difficult for them to go back to wearing a smaller watch again. 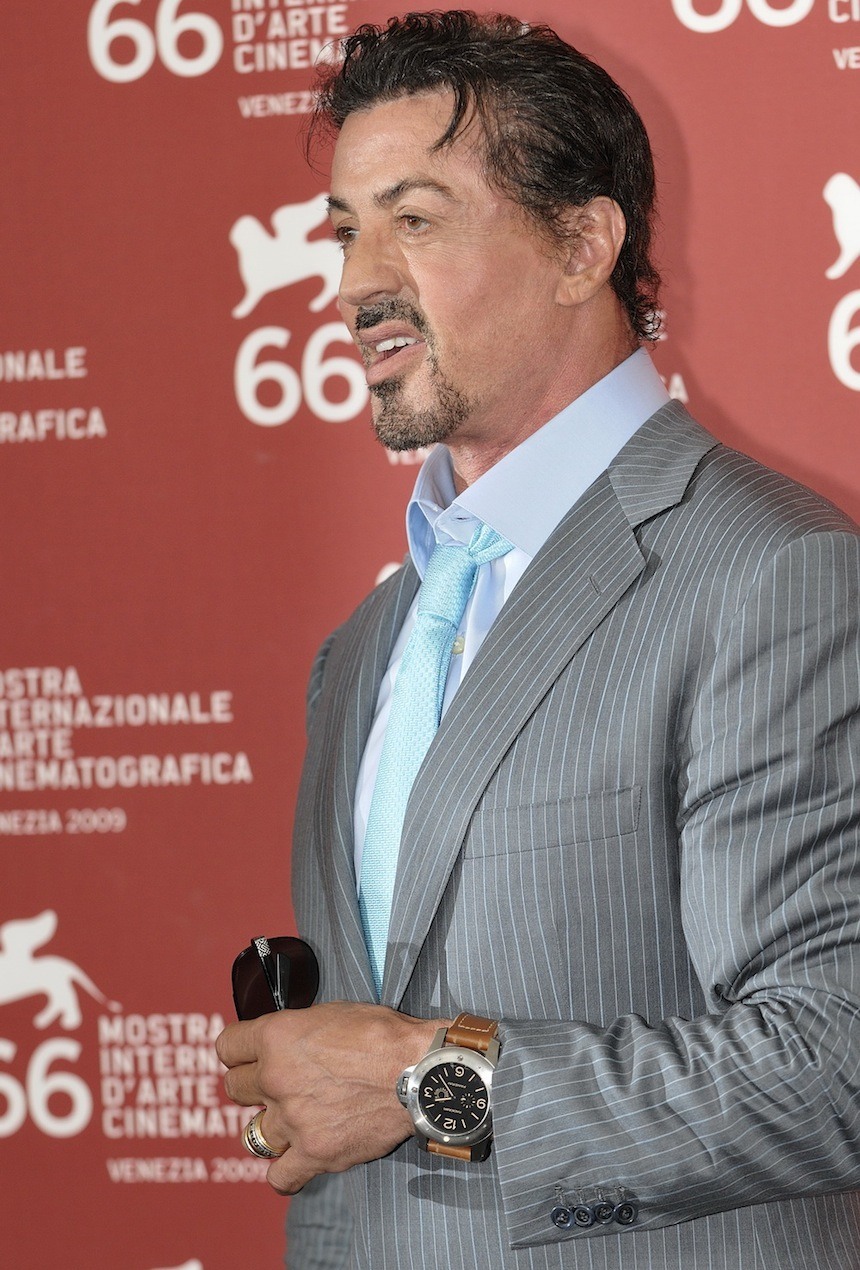 Sylvester Stallone wearing the humongous, 60 millimeters wide Panerai L’Egiziano PAM341, a tribute to a massive piece Panerai originally made for the Egyptian army around the ’50s.

As much as we don’t like to admit that fashion trends play a part in what fine timepieces we wear, they do. Many people credit celebrities for helping to popularize large sport watches that eventually led to the popularity of other large watches being made. It was in the late 1990s that actors such as Arnold Schwarzenegger wearing an Audemars Piguet Royal Oak Offshore and Sylvester Stallone wearing a Panerai Luminor began to capture media attention with these larger-than-average (at the time) watches. The public seemed to quickly warm to the idea of wearing larger sport watches with a bold personality, especially because on larger or bulkier guys they looked much better than smaller watches.