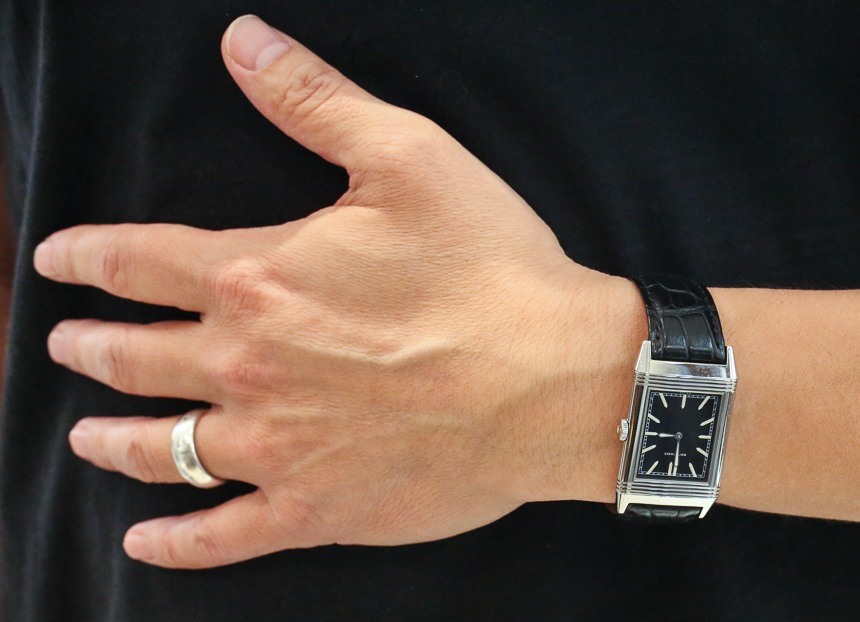 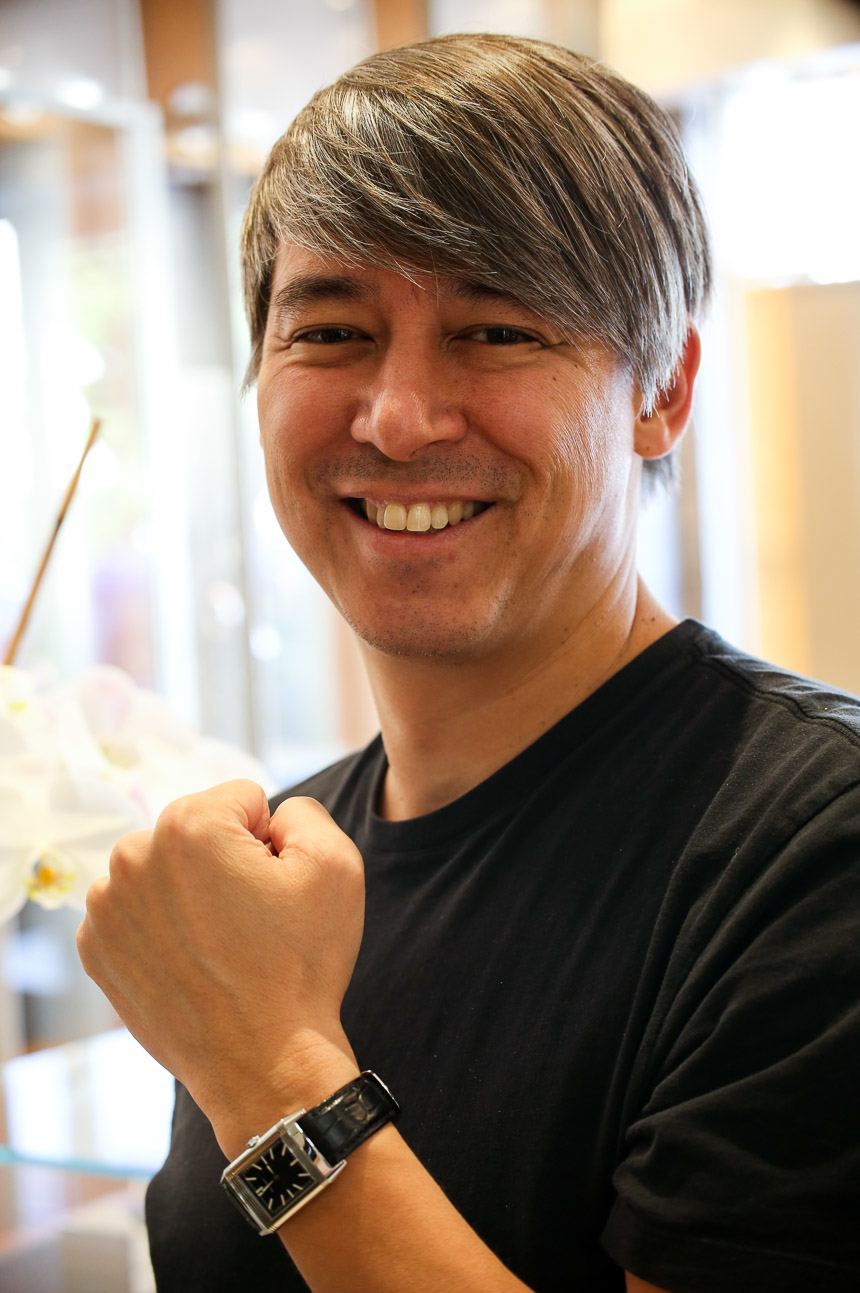 So, what watch does one wear to the Academy Awards as a first-time Oscar nominee? Admittedly, this was a new first-world problem for Tom Cross, who, as editor of the film Whiplash, recently received an Academy Award nomination for “Best Editing” – one of five Oscars Whiplash is up for this year. UPDATE: Tom Cross received the Academy Award (as well as Independent Spirit Award) for Film Editing for the movie Whiplash. This was a scenario Tom Cross did not anticipate when he started work on the labor-of-love indie drama. “We were just happy to find out we got in to Sundance,” explains  Cross of Whiplash’s long, unexpected trajectory: first debuting at the 2014 Sundance Film Festival, then becoming one of – if not the – most acclaimed films of the year.

Shot in 19 days on a minuscule budget, Whiplash captures the psychological warfare between a young jazz drummer striving for virtuosity (Miles Teller) and his sadistic teacher/bandleader (J.K. Simmons) who punishes as much as pushes his disciple to the limits of his talent. The film’s combination of intense drama and complex, dazzling musical sequences earned both the Jury Prize and Audience Award at Sundance, going on to earn multiple nominations and awards from all the most prestigious film critics’ societies, film festivals, and industry honors. Recently, Whiplash took three awards – including a “Best Editing” statuette for Cross – at the British Academy Film Awards, the U.K. equivalent of the Oscars, and wraps up its award run this weekend with the esteemed Independent Spirit Awards and the Academy Awards.

In the wake of this success, Cross found himself set to attend more formal events than he’d ever had to in his life – let alone the mother of them all, the Oscars, whose ceremony is broadcast to millions worldwide. A renowned film editor, Cross is best known for his work on edgy indie-cinema productions like Crazy Heart and We Own the Night, as well as notable TV shows like The Bridge and Deadwood. Seeing the dynamic precision timing of his cutting on the silver screen, it’s not surprising to discover Cross is also a passionate watch enthusiast.

Tom Cross has already built up a succinct collection of interesting timepieces – a beautiful ‘40s-era Lemania chronograph and ‘50s Omega dress watch, both family heirlooms; a Hamilton X-01, the fascinating limited-edition recreation of a futuristic timepiece from the film 2001: A Space Odyssey (which will also be the subject of its own upcoming aBlogtoWatch article); for daily wear, he alternates a mil-spec quartz Marathon and Hamilton Thin-O-Matic on a quite cool, trés-‘70s, custom expansion bracelet. Still, nothing in Tom’s watch box reached the level of formality demanded by a televised awards show like the Academy Awards. To help Tom Cross with his award-season timepiece needs, aBlogtoWatch put him together with one of horology’s most revered and innovative manufactures, Jaeger-LeCoultre. 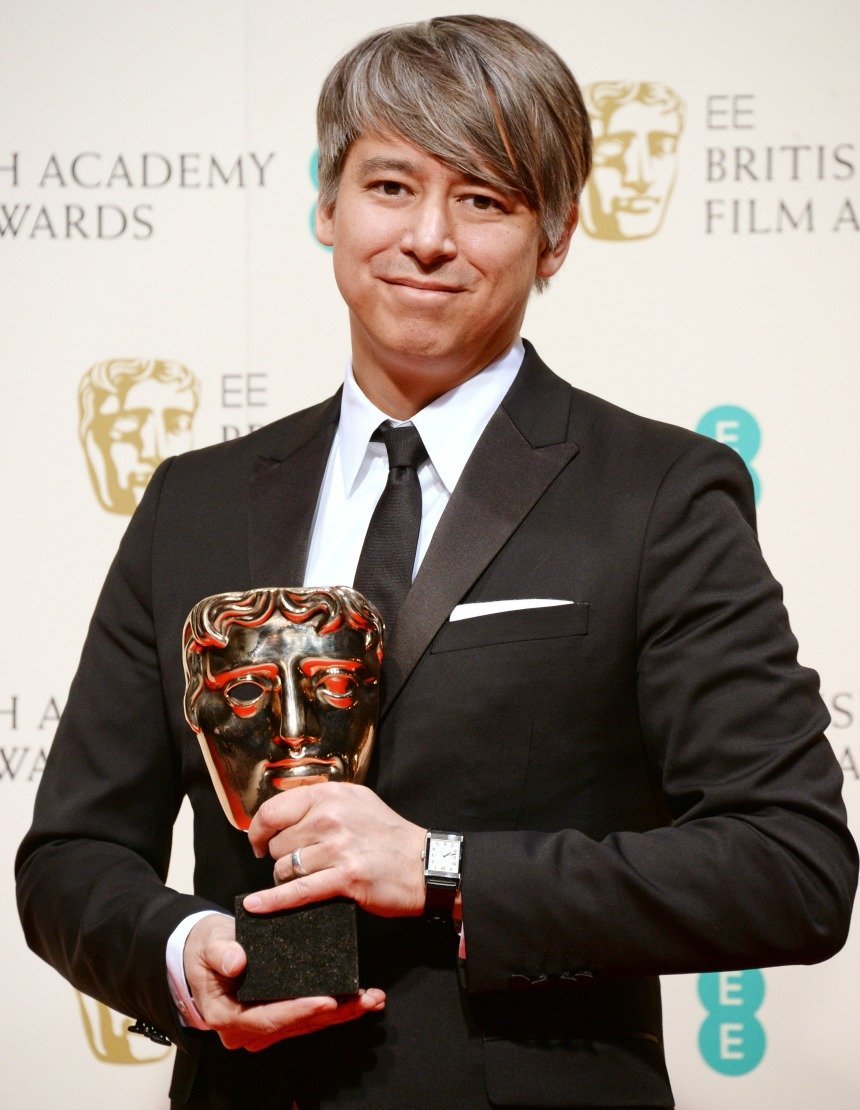 Tom Cross with his Film Editing Award for Whiplash at the BAFTAs. 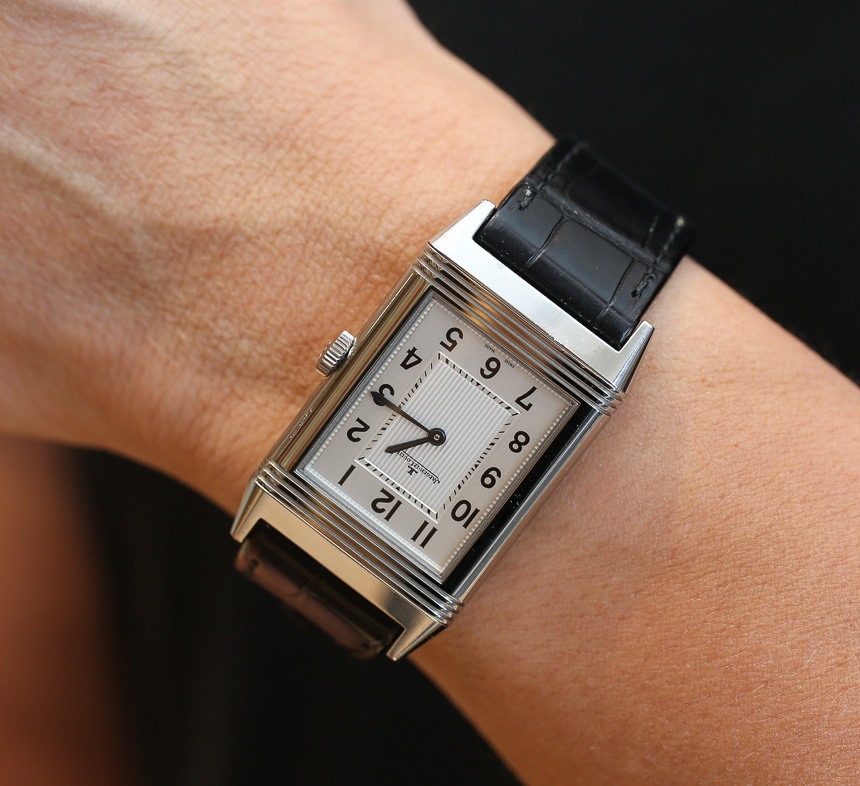 Jaeger-LeCoultre is in fact one of the biggest supporters of filmmaking in the watchmaking world, as the longtime official partner of the Venice Film Festival, the founder of the New York Film Festival’s “Filmmaker In Residence” program, and a patron of prestigious film fests spanning San Sebastian and Toronto to Shanghai and Dubai. Beyond the cinematic connection, more than anything, Tom Cross has been a longtime fan of JLC’s epitome of modern classicism. “I’m a fan of modern design, and a watch like [Jaeger-LeCoultre’s signature model] the Reverso is an icon up there with the Speedmaster, or even an Eames Chair,” Cross says. “It’s completely distinctive. At the same time, I’m fascinated by a watch’s mechanism and complications, and Jaeger has such an innovative heritage in this area.” 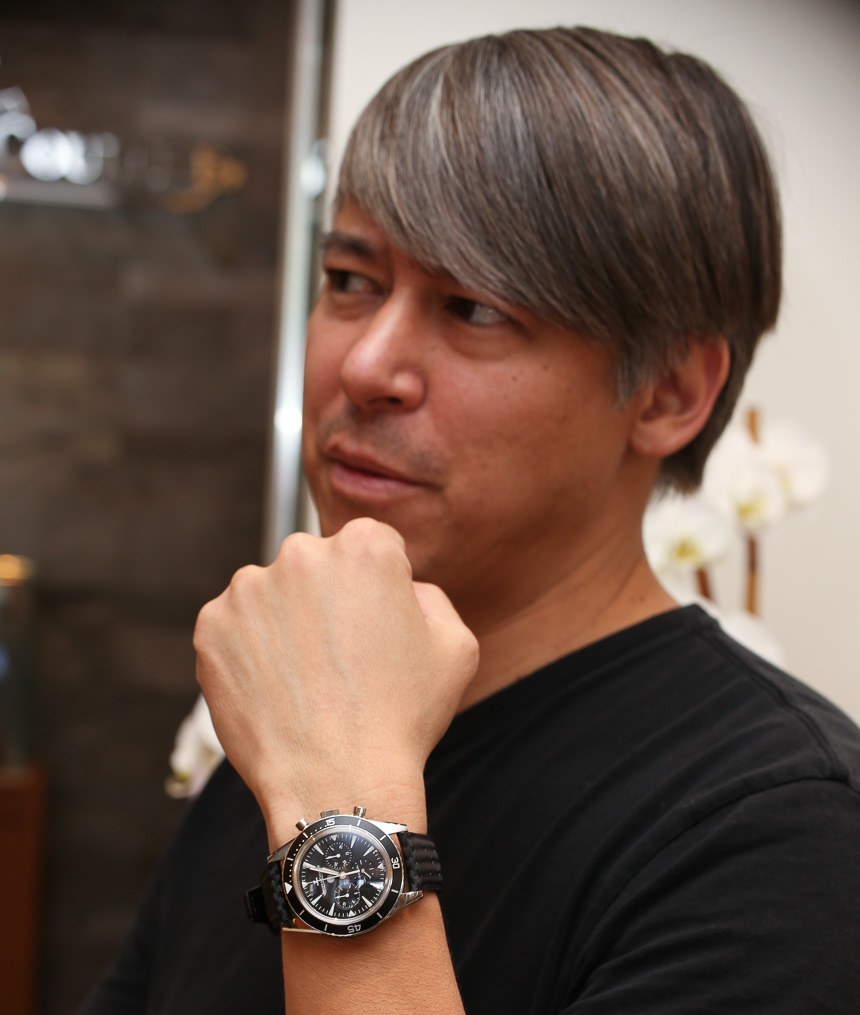 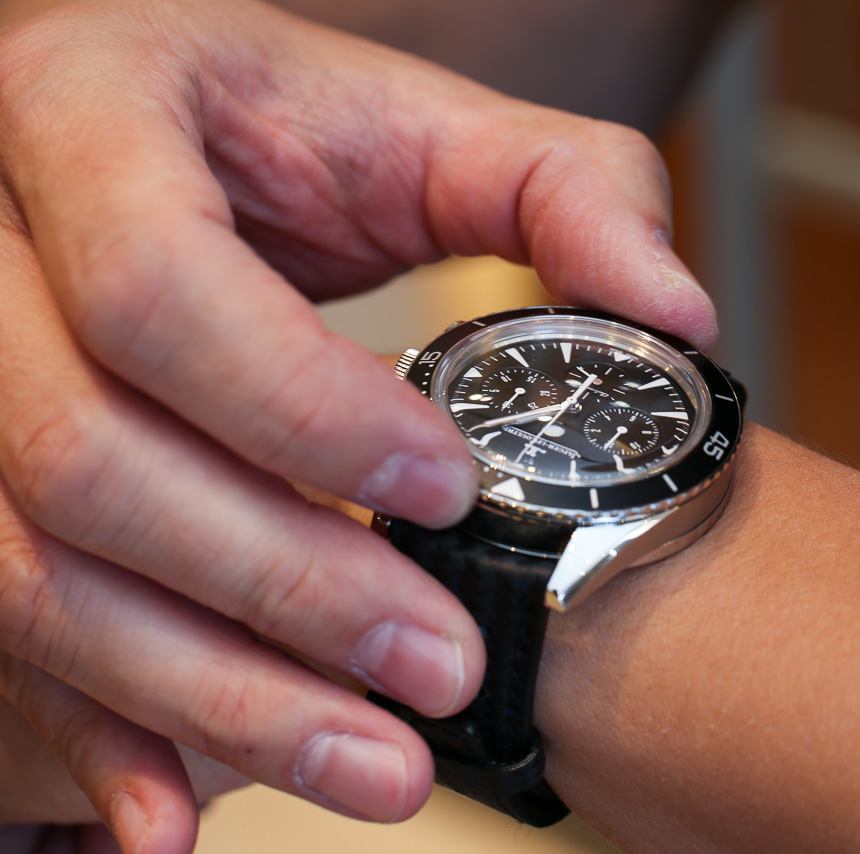 “Jaeger-LeCoultre has well over 1,000 of its own in-house movements,” interjects Nicola Cagliata, the voluble and charismatic Italian boutique manager at Jaeger-LeCoultre’s Beverly Hills boutique. On an afternoon not long before the awards season commences for Tom, Cagliata is assisting Tom in his timepiece selection, and it’s stunning just how many JLC models could rise to the occasion for the job at hand. For the less formal events and parties around the film awards season, Tom considered some of Jaeger’s sportier options. A fan of chronograph complications, he tried on the Jaeger-LeCoultre Deep Sea Chronograph Ref. 208A570, which looked great on Tom’s wrist but ultimately seemed too casual. Next up was the Geophysic 1958, whose clean modernist lines, retro details, and feats of engineering contained a contemporary casing definitely appealed to Tom’s sensibility. Seeing it on the wrist, it’s clear why this is one of JLC’s most desirable recent creations. 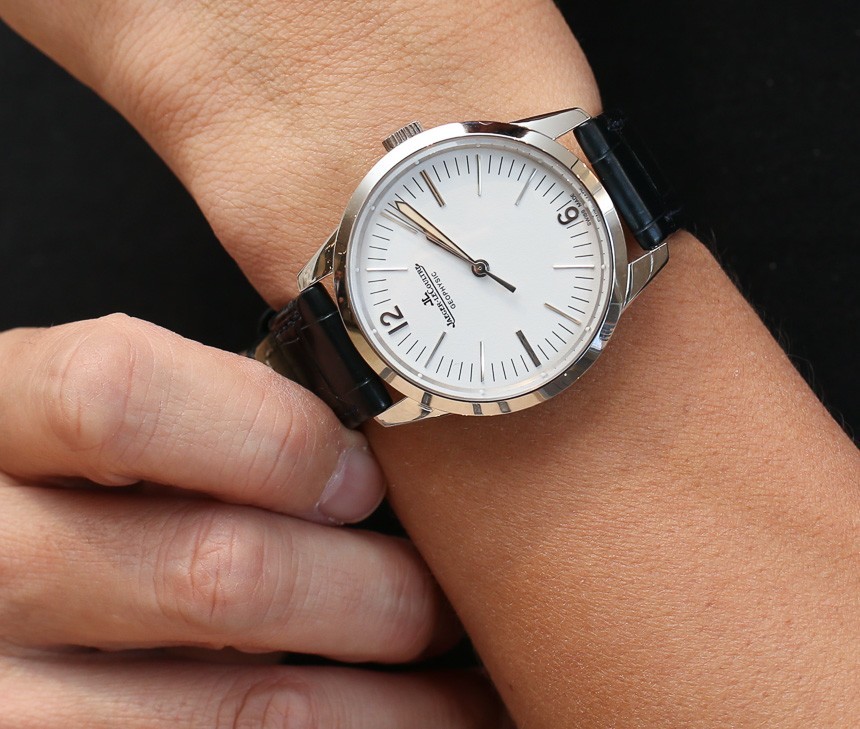 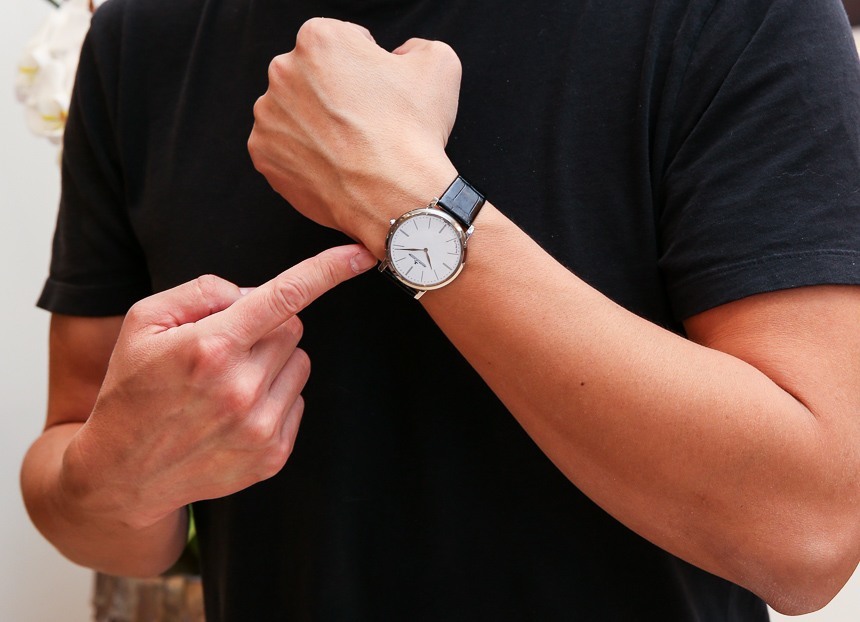 For the next option, though, Nicola brought out the big guns. He strapped onto Tom Cross’ wrist the Jaeger-LeCoultre Master Ultra Thin Grand Feu – which, with its exquisite white gold case, incredibly finished enamel dial, and sleek profile at 5mm thickness, is one of the most formal and elegant watch options available today (and appropriately expensive, at $40,900). Indeed, as James Stacey wrote in his aBlogtoWatch review of the Grand Feu, “When I first laid eyes on the new Jaeger Le-Coultre Master Ultra Thin Grand Feu only one question formed in my mind – Does it come with a tuxedo? I’m going to need a tux to pull that off.” Seeing the Grand Feu on Tom’s wrist, it brought home both the Grand Feu’s true elegance as well as its technical innovation. Outfitted with Jaeger’s 849 calibre – a manual-wind single-barrel movement that’s astonishingly svelte at 1.85 mm – gives it ideal dimensions to wear under shirt cuffs. “It’s one of the thinnest, if not the thinnest, mechanical wristwatches ever made,” Nicola noted. “And the technique of the dial, applying the enamel by hand with a brush, makes it pretty special, too.” 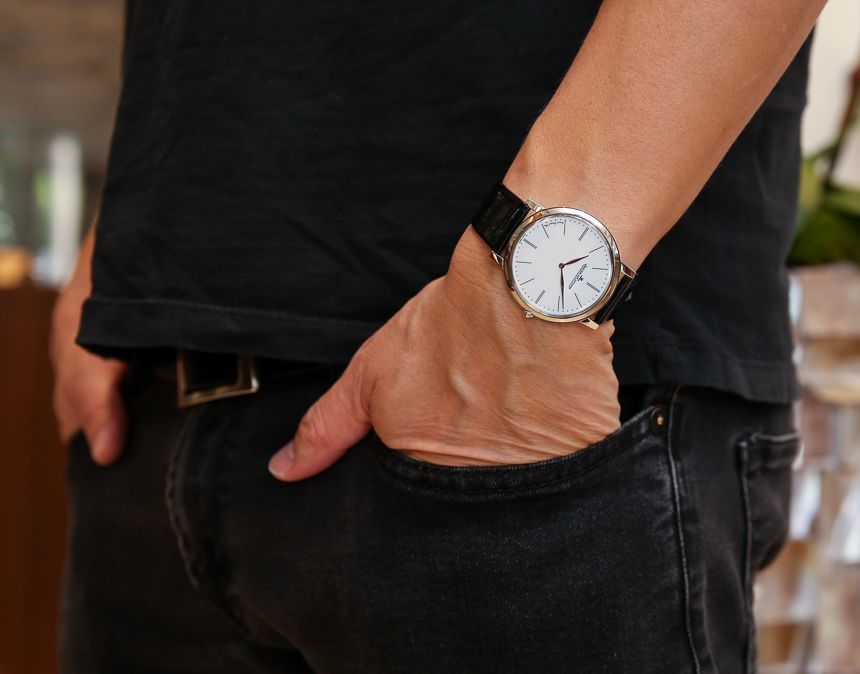 Tom admired the Grand Feu, especially its artful sapphire crystal; it also looked great on his wrist, and would clearly hold its own with, and maybe even elevate, a tuxedo’s formality. While the Grand Feu looked like a shoo-in for the win, though, there was another contender remaining among the finalists.

Envelope, please: “And the winner for the watch that Tom Cross will wear to the Oscars goes to…” None other than the brand’s signature model, the Jaeger-LeCoultre Reverso. “The Grand Feu is amazing, but the Reverso is more me,” Tom noted. “Of all the watches I’ve tried on, the Reverso immediately fit so well. I have smaller-than-average wrists, so with contemporary watches, it’s difficult to find something I feel comfortable with. But once I put it on a Reverso for the first time, it fit like a glove. It just felt like it was made for me. And it’s Jaeger’s signature watch, so it has all of what makes the brand great, in my opinion.” 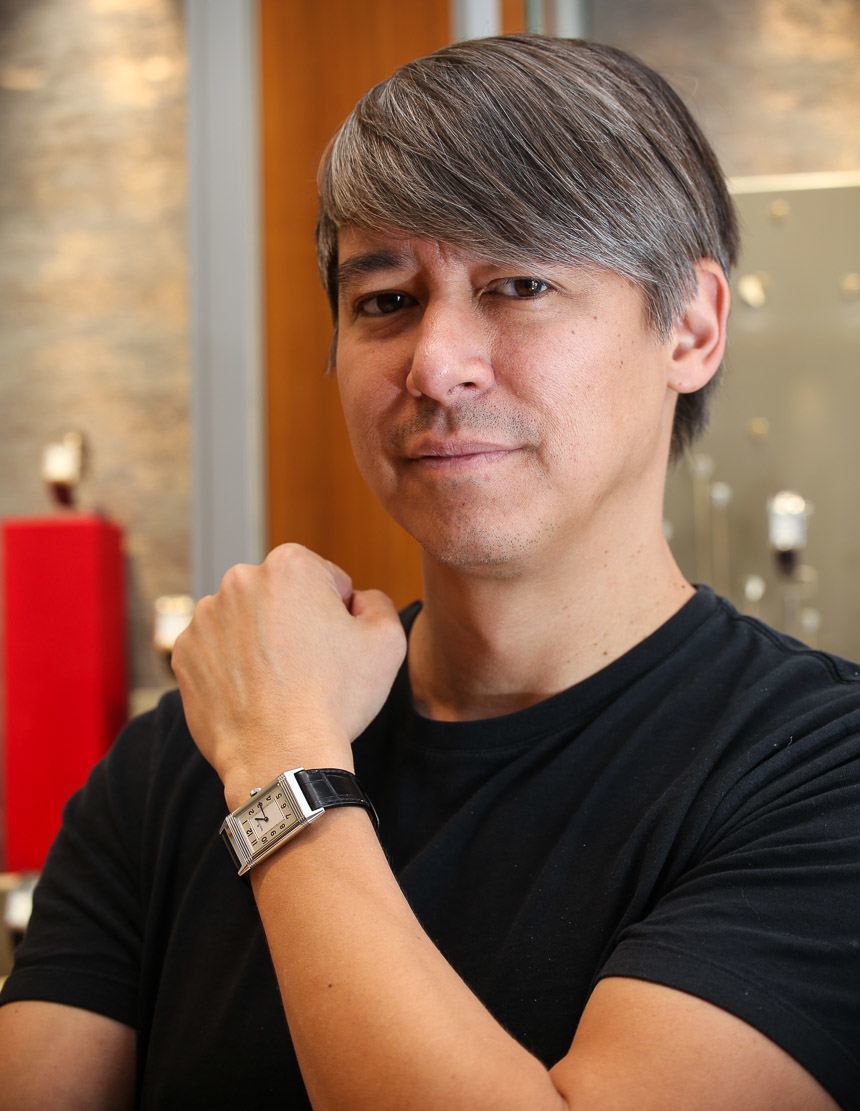 The first Jaeger-LeCoultre Reverso Tom tried on was the Ultra Thin reference Q2788520 – ultimately choosing to wear it to the British Academy Film Awards ceremony on February 8th at the London Opera House, where he took the “Best Editing” honors. With its Arabic numerals in a classical font, exquisite detail finishing on the dial, high-quality alligator strap, expertly blued hands, and iconic case, Tom found the Ultra Thin “perfect for the British atmosphere, and it worked for every occasions. Of course, it was perfect to wear with a tux at the BAFTA ceremony; at the same time, I found it sporty enough that it felt completely appropriate for a cocktail party, or just walking around London. I was surprised at how addictive the actual Jaeger-LeCoultre Reverso complication is as well. I found myself reversing the watch constantly, polishing the back, trying to imagine what I’d engrave on it if I had the opportunity to do so. The possibilities are so many.” 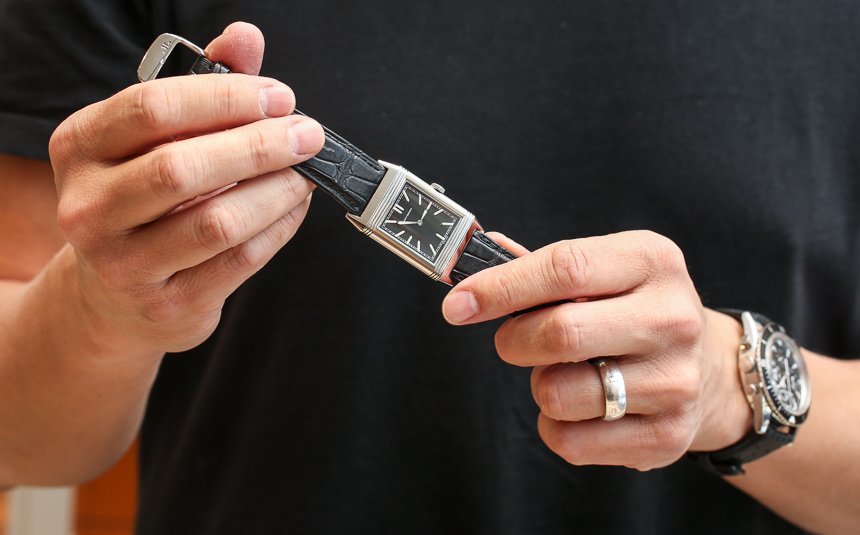 To attend the Oscar ceremony, which is broadcast this Sunday, February 22nd, however, Tom chose another masterful Jaeger-LeCoultre Reverso variation: the Grande Reverso Ultra Thin Tribute to 1931 with the black dial, patina hour markers, and, in a nod to the model’s Polo history, a strap crafted by elite Argentinean polo bootmakers Casa Fagliano. “This is the dream one,” he noted while strapping it on. “I love the index markers for hour hands, and the fact that it has the vintage look, but with modern lume.” 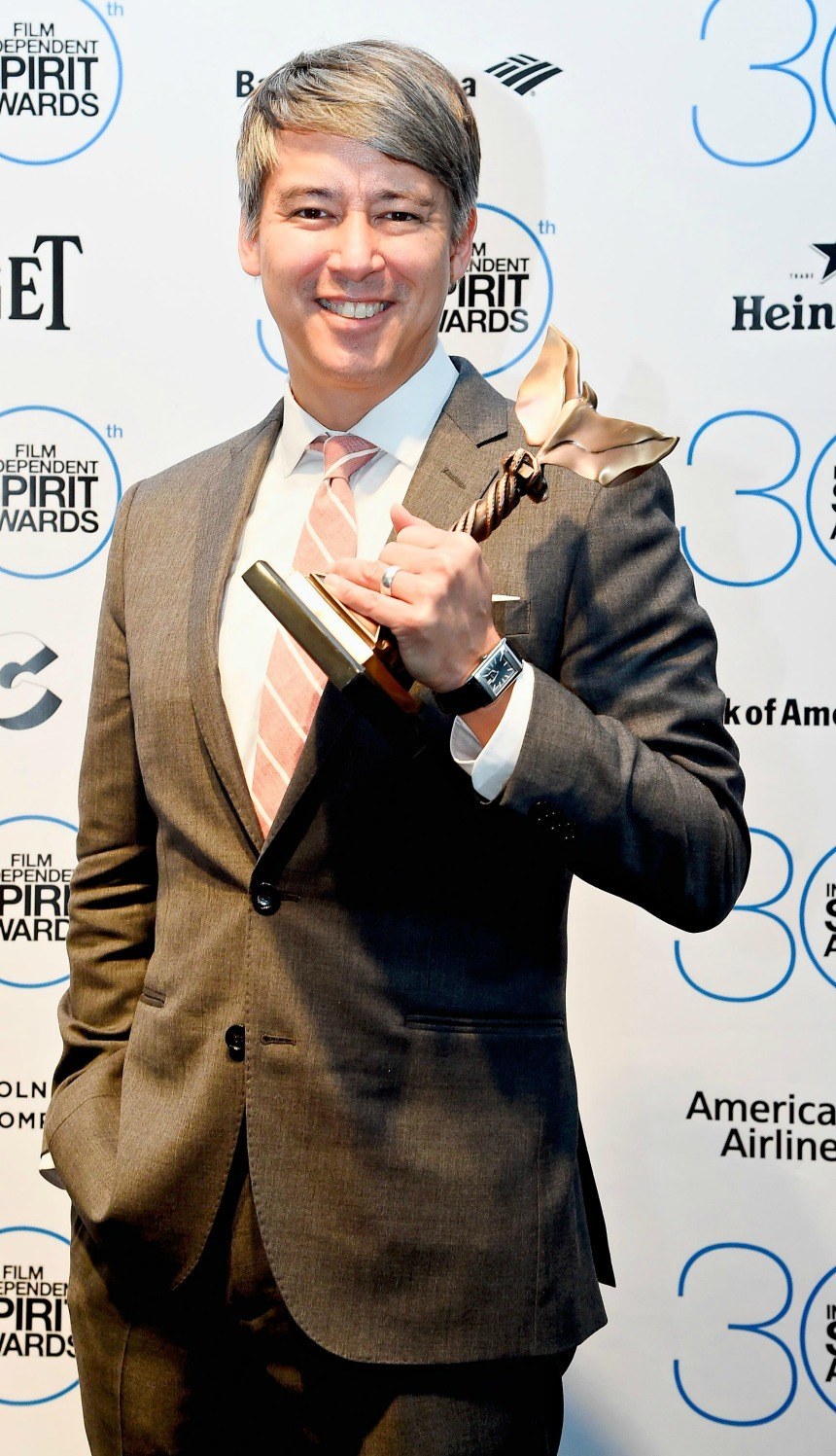 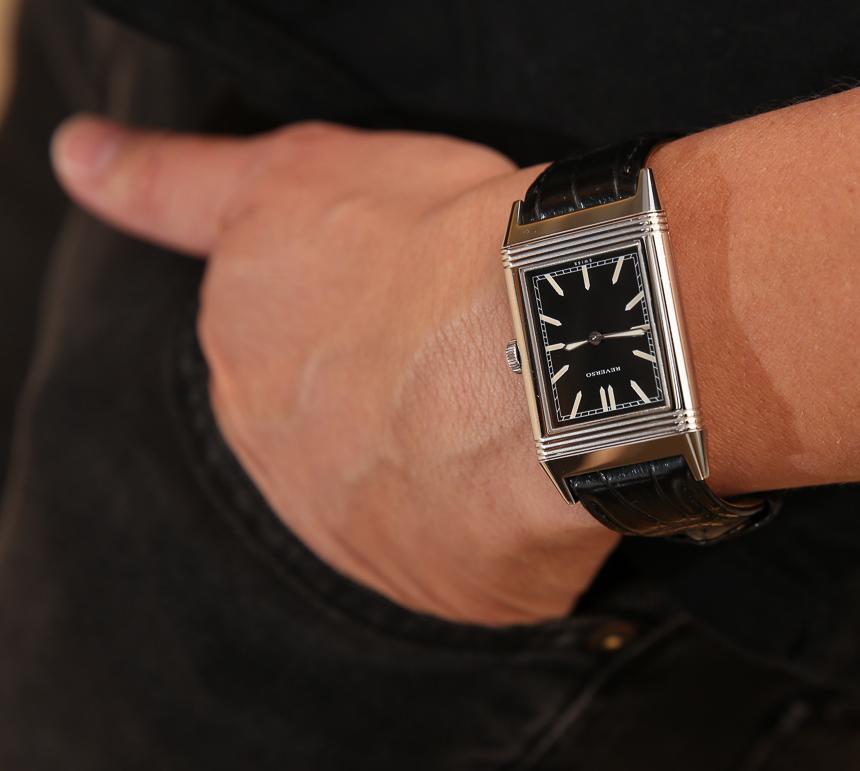 Again, Tom Cross found the balance between classic and modern ultimately what compelled him to this choice. “The minimal aesthetic both enhances the Art Deco elements, yet also makes the design even more timeless,” he said. “I’ve always found myself gravitating to that look, whether on vintage Omega Seamasters, Timex, or a Jaeger-LeCoultre Reverso – it’s such a mid-century hallmark. The Reverso just looks endlessly futuristic because of its classic lines and shape. And while the 1931 will of course go perfectly with a tuxedo, you can also wear it with a t-shirt, and it works. I’d wear this all the time.” 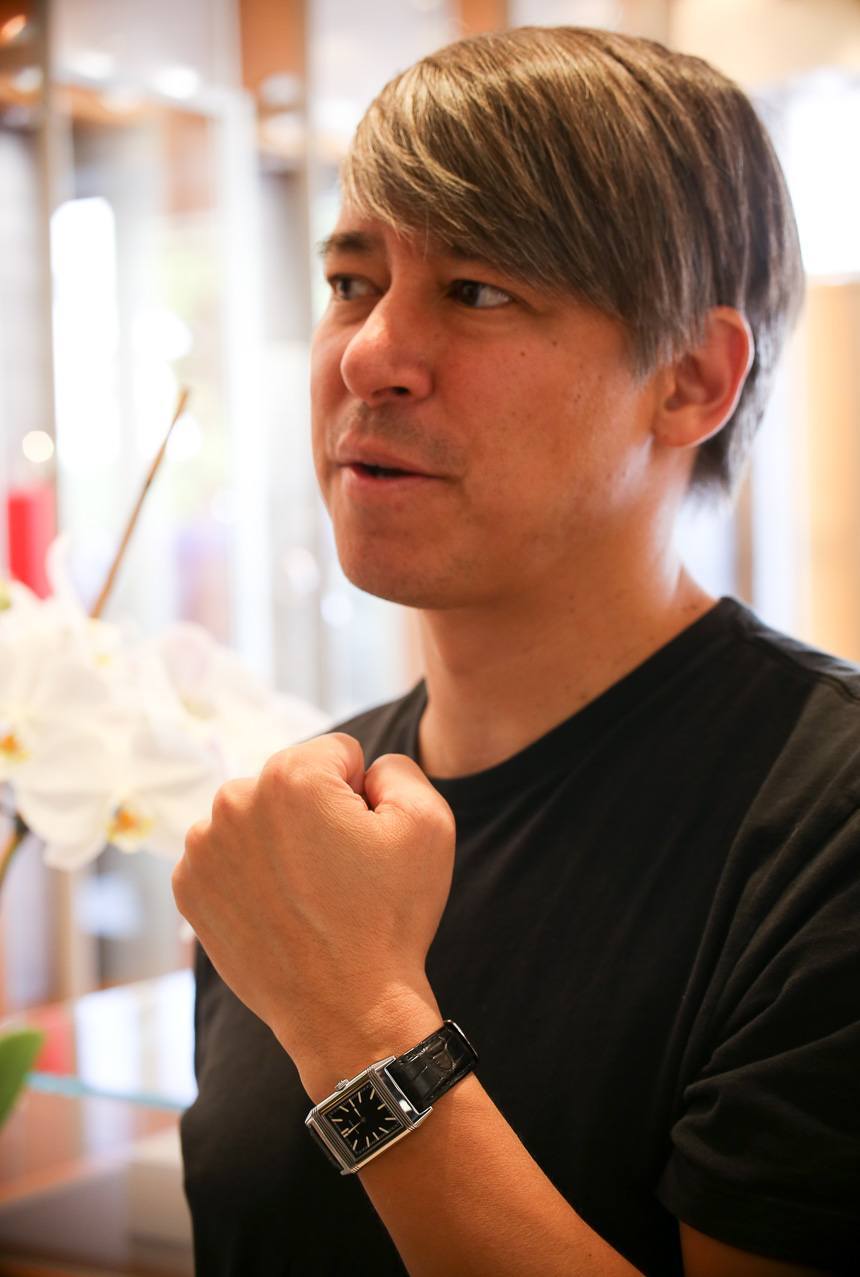 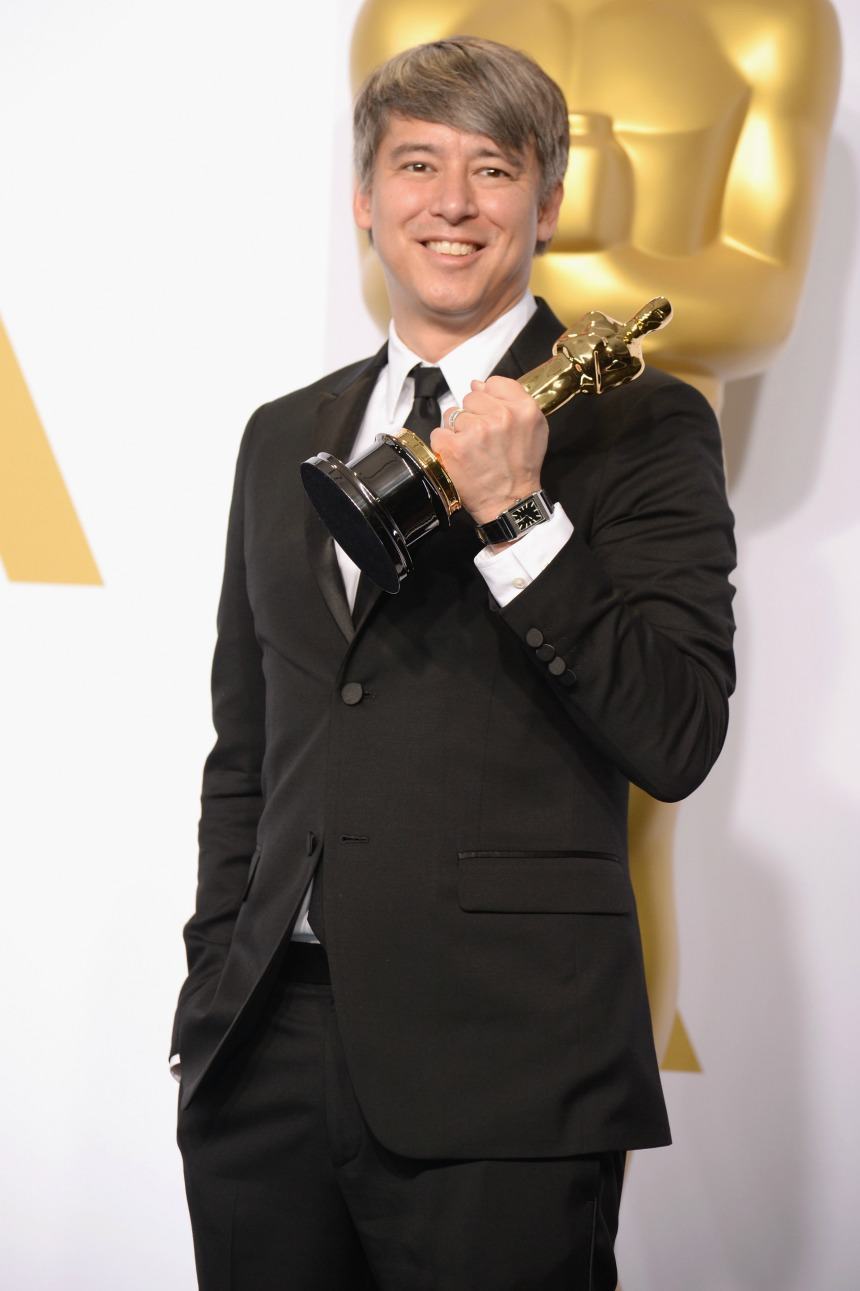 Tom Cross with his Film Editing Award for Whiplash at the Academy Awards.

Flipping the watch back once again to its shiny steel case back, Cross notes how the blank canvas of the Jaeger-LeCoultre Reverso’s flipped case back would prove ideal to mark a personal milestone like, say, being nominated for your first Academy Award. “I knew I would like the Reverso because it’s an icon, but when I actually wore one, it immediately became a must-have,” he says. “It’s really the ideal watch to commemorate something momentous in your life. It just calls for that.” jaeger-lecoultre.com

UPDATE: Congratulations to Tom Cross (and the Whiplash movie crew) for winning best Film Editing Awards in 2015 for his work on Whiplash at the BAFTAs, Independent Spirit Awards, and for getting an Oscar at the Academy Awards (we made sure he was well-wristed for each of them).
Advertising Message