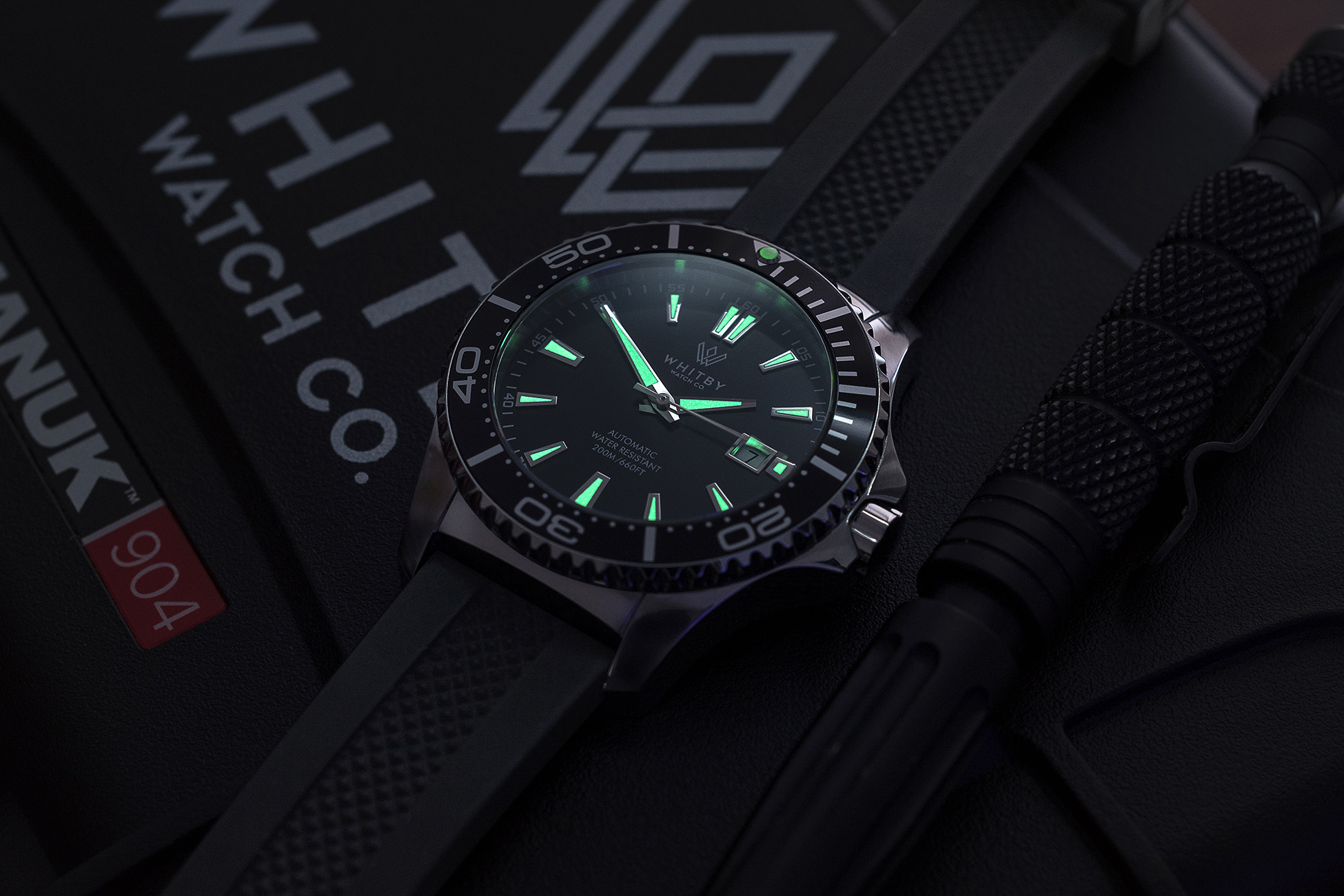 As the resident Canuck of the ABTW team, I’m always on the lookout for something interesting north of the border to share. When I crossed paths with the Intrepid Diver, I felt compelled to get my hands on the Whitby Watch Co.’s inaugural release. The watch and brand were developed as a way to honor the memory of William Stephenson and his creation of the spy-training facility known as “Camp X.” The facility itself was built in Whitby, Ontario in 1941 as an Allied covert operations effort during World War II. Stephenson himself was the real-life inspiration for Ian Fleming’s James Bond, so the attraction to his legacy definitely makes sense. Being a former resident of Whitby myself, I’m happy to push this slice of Canadian content to the watch loving public. 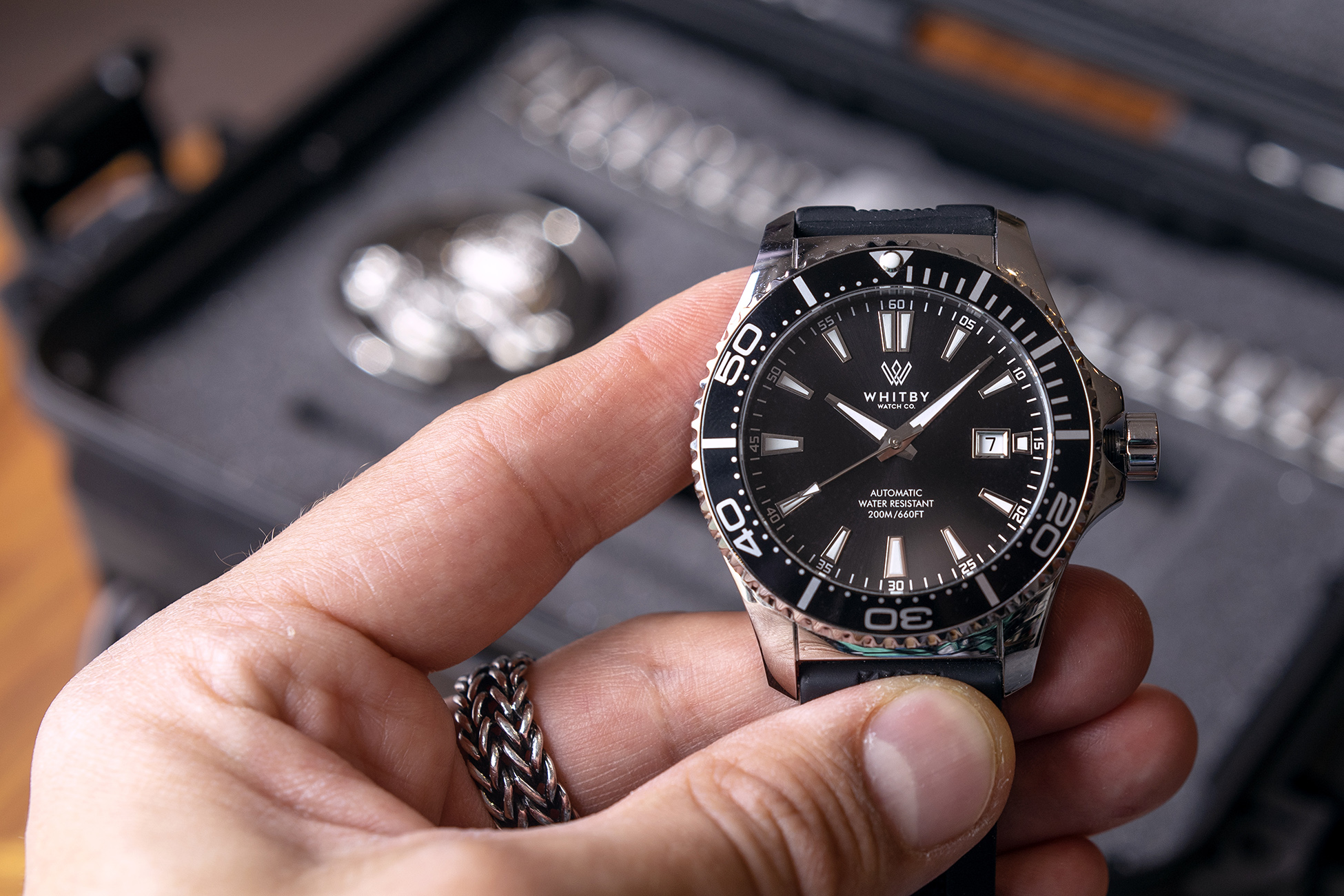 The Whitby Watch Co. brand is co-founded by Jay Harrison and Greg Tsagris. Jay is a former NHL defenseman who played for the Toronto Maple Leafs, Carolina Hurricanes, and Winnipeg Jets. In recent years, he decided to take on the development of a watch brand as a passion project. The brand mission? To deliver a high-quality Swiss watch for the lowest cost possible and spread the appreciation for mechanical watches within the entry-level market.

Did they achieve their objective? Let’s take a closer look at the watch itself. 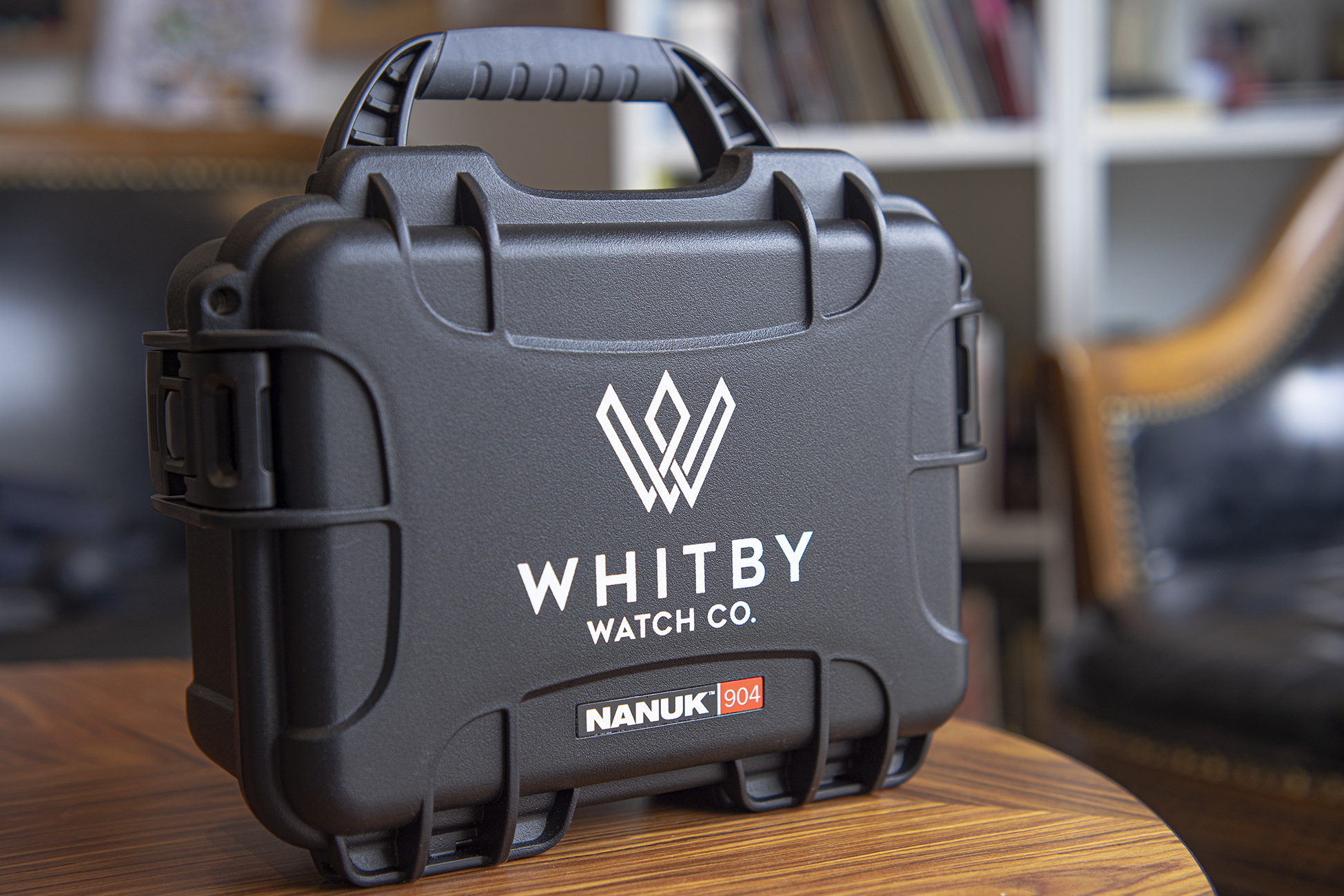 Whitby Watch Co.’s Intrepid Diver certainly sets the tone for the piece right out of the gate. Arriving in a branded Nanuk pelican case, the theme is already clear. Upon opening the case, you are greeted by the Intrepid Diver centered in a display with a short introductory writeup about Camp X. 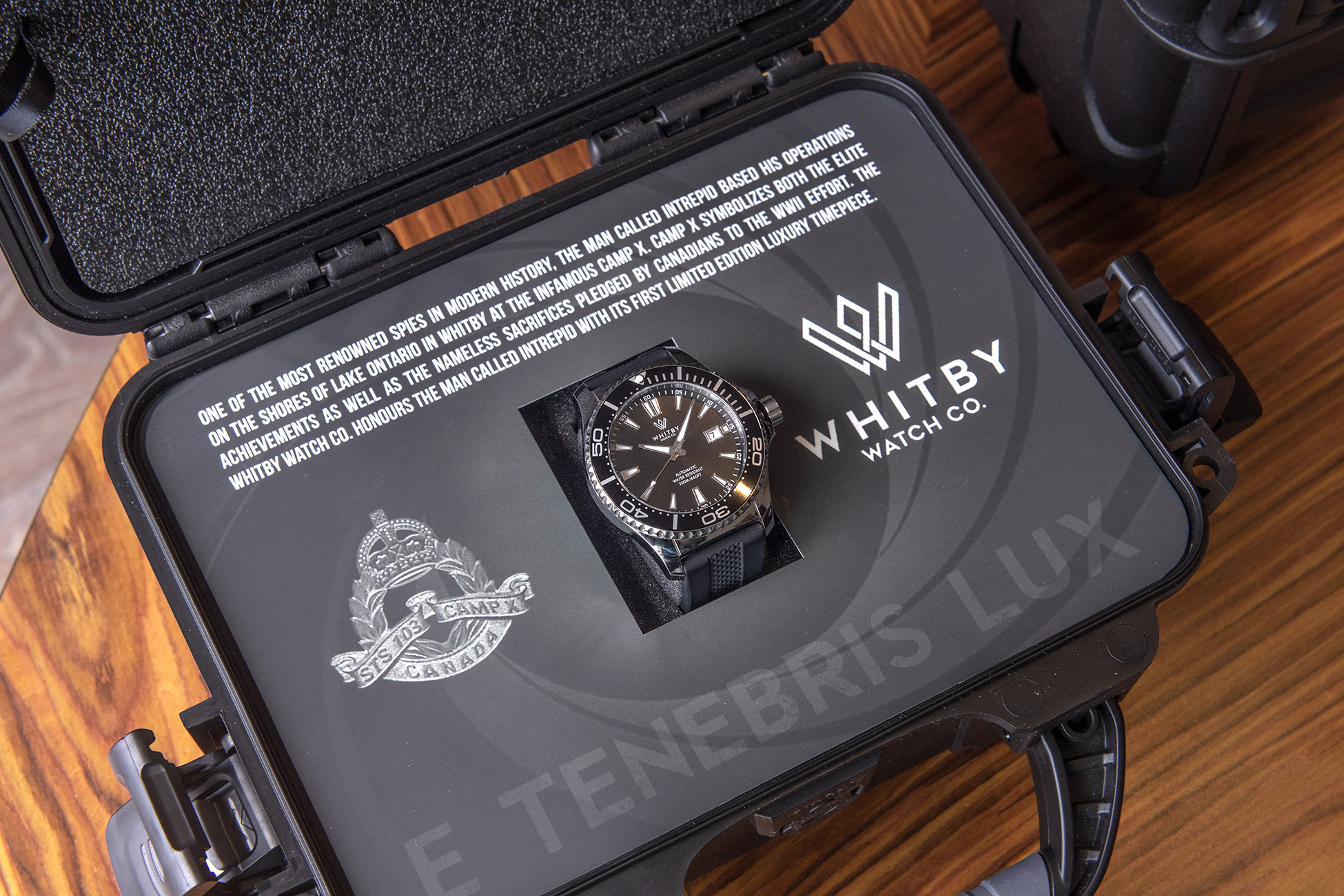 After removing the watch and the info card, you will find the stainless steel bracelet and commemorative challenge coin. The coin is emblazoned with a crest and “STS 103 CAMP X” for “Special Training School 103.” The corresponding production number is laser etched just below the crest, and the reverse of the coin carries the compass rose of the Canadian Forces Intelligence Branch.

There is also a hidden compartment with a few extra top-secret goodies inside, which definitely adds to the fun factor. There are pictures of William Stephenson and some historic Camp X training scenes, which help flesh out the story behind the inspiration. 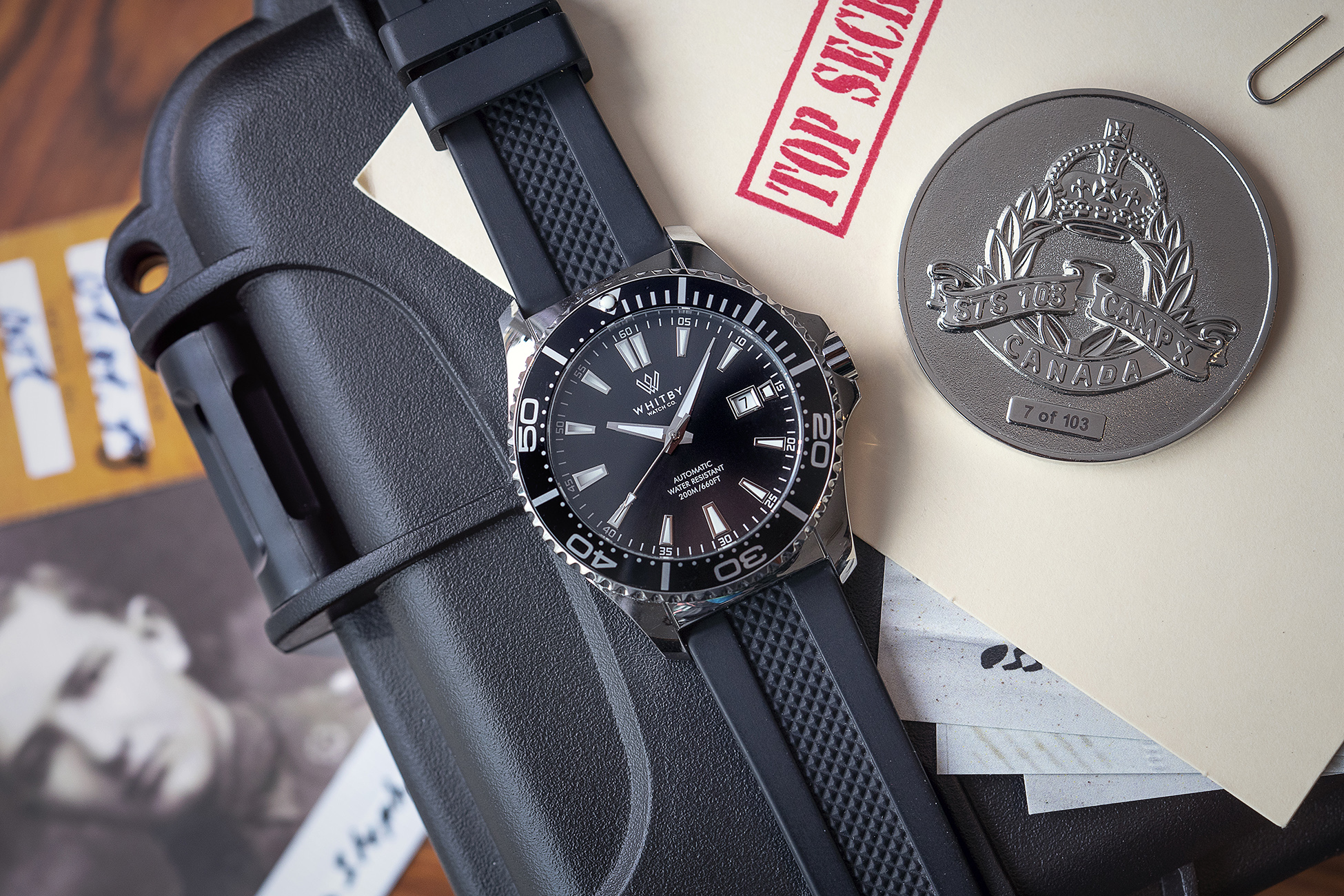 I know you wear the watch and not the box, but it is certainly heartening to see such thought put into the presentation of the Whitby Watch Co. Intrepid Diver — especially considering the $700 CAD price tag. Furthermore, given Whitby Watch Co.’s mission of engaging and exciting entry-level buyers, this presentation makes a whole lot of sense. 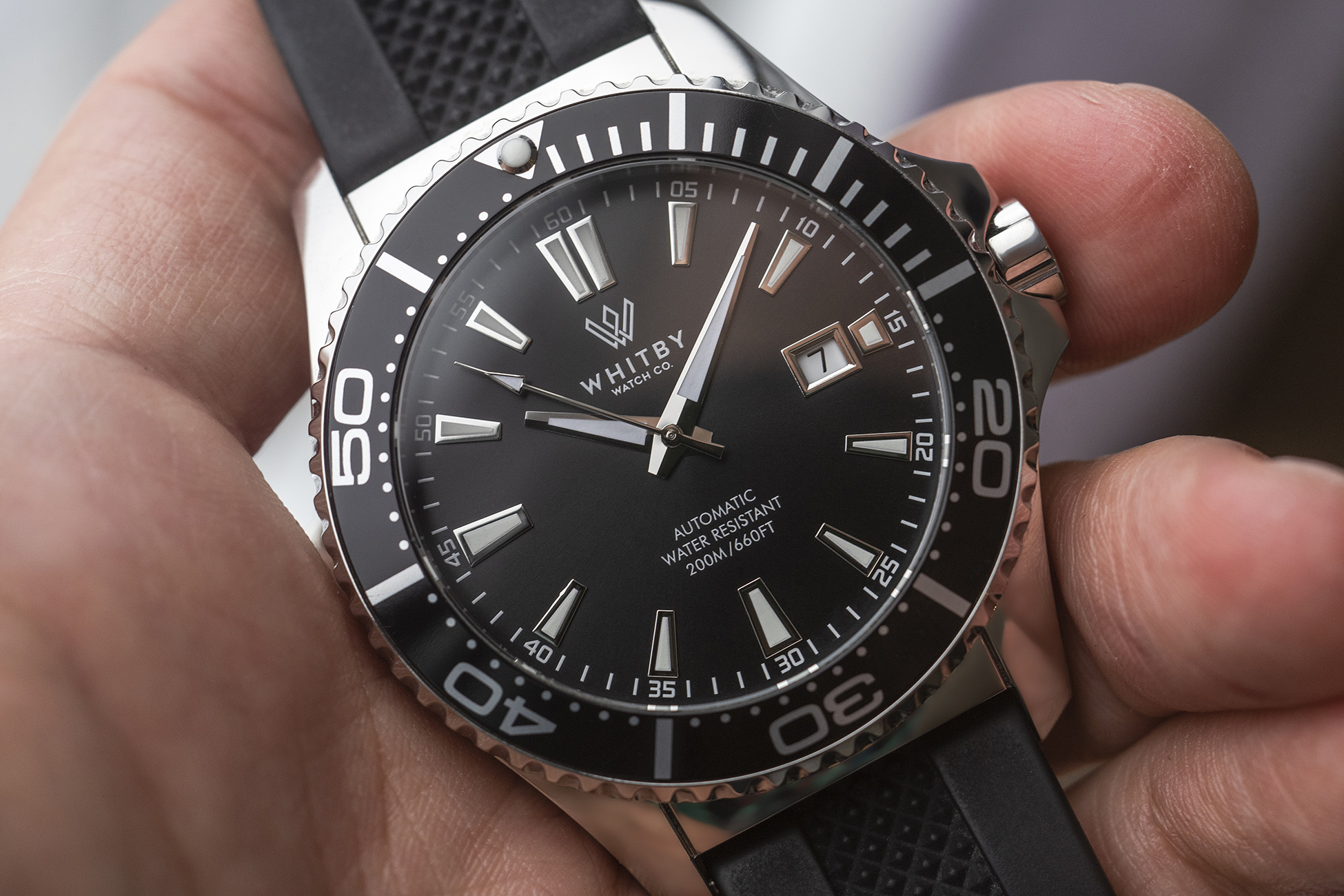 Starting with the overall look and feel, the watch certainly has a sufficient heft to it at 44mm of 316L Stainless Steel. The case is entirely polished, with the production number laser-etched on the side. Whitby Watch Co. sent me a prototype for hands-on review, which is fittingly numbered #007 for the William Stephenson tie-in. The screw-down crown helps achieve the 200M water resistance rating and is branded with the “W” icon from the logo. 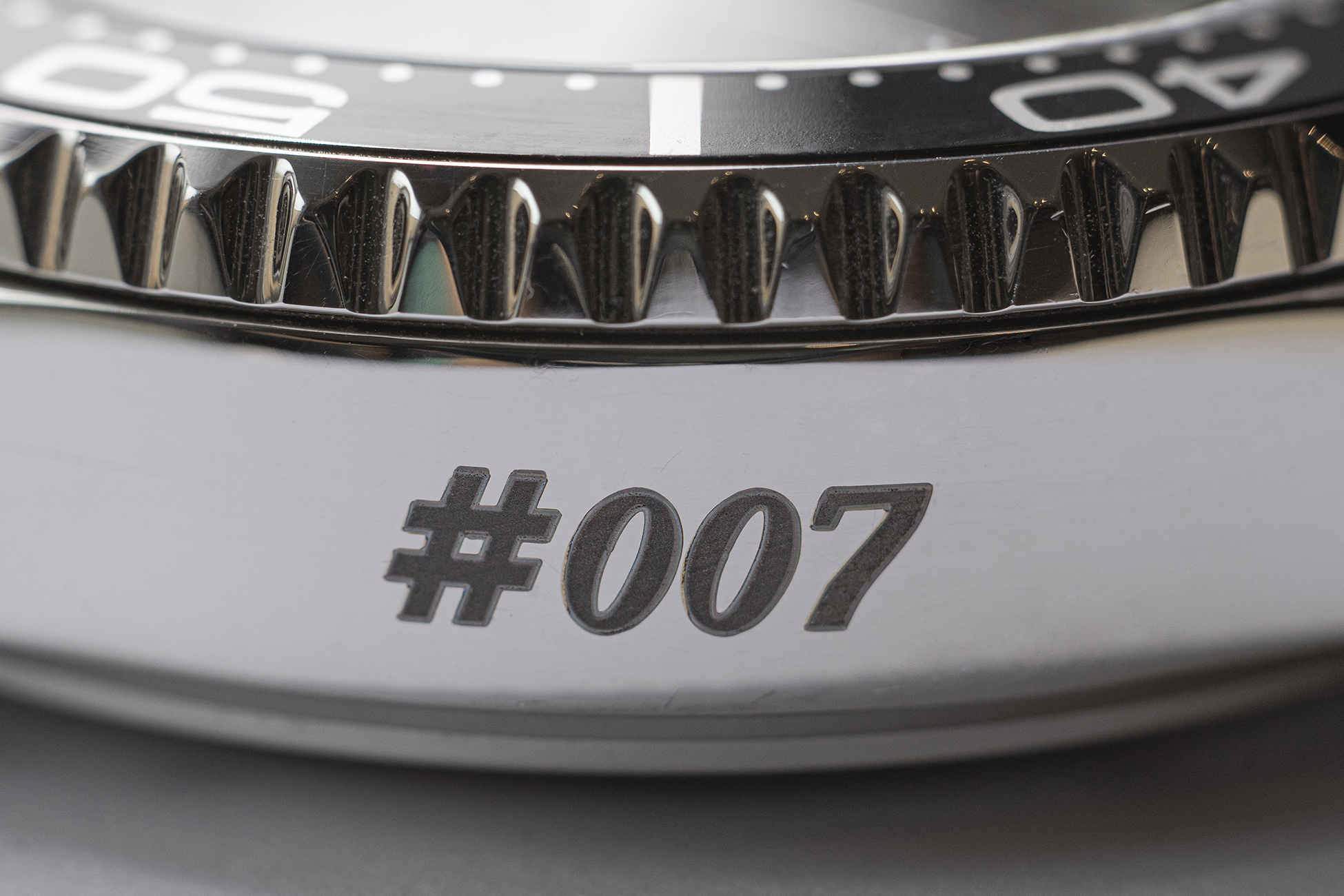 On the prototype I reviewed, a generic caseback gave a glimpse of the ETA 2824-2 that powers the Intrepid Diver. However, the production model does have a much nicer solid back that features the same compass rose of the Canadian Forces Intelligence branch. I have included an image of both so you still get to see what’s on the inside. Also, the case itself is manufactured in Germany, which is another mind boggle, given the affordability. 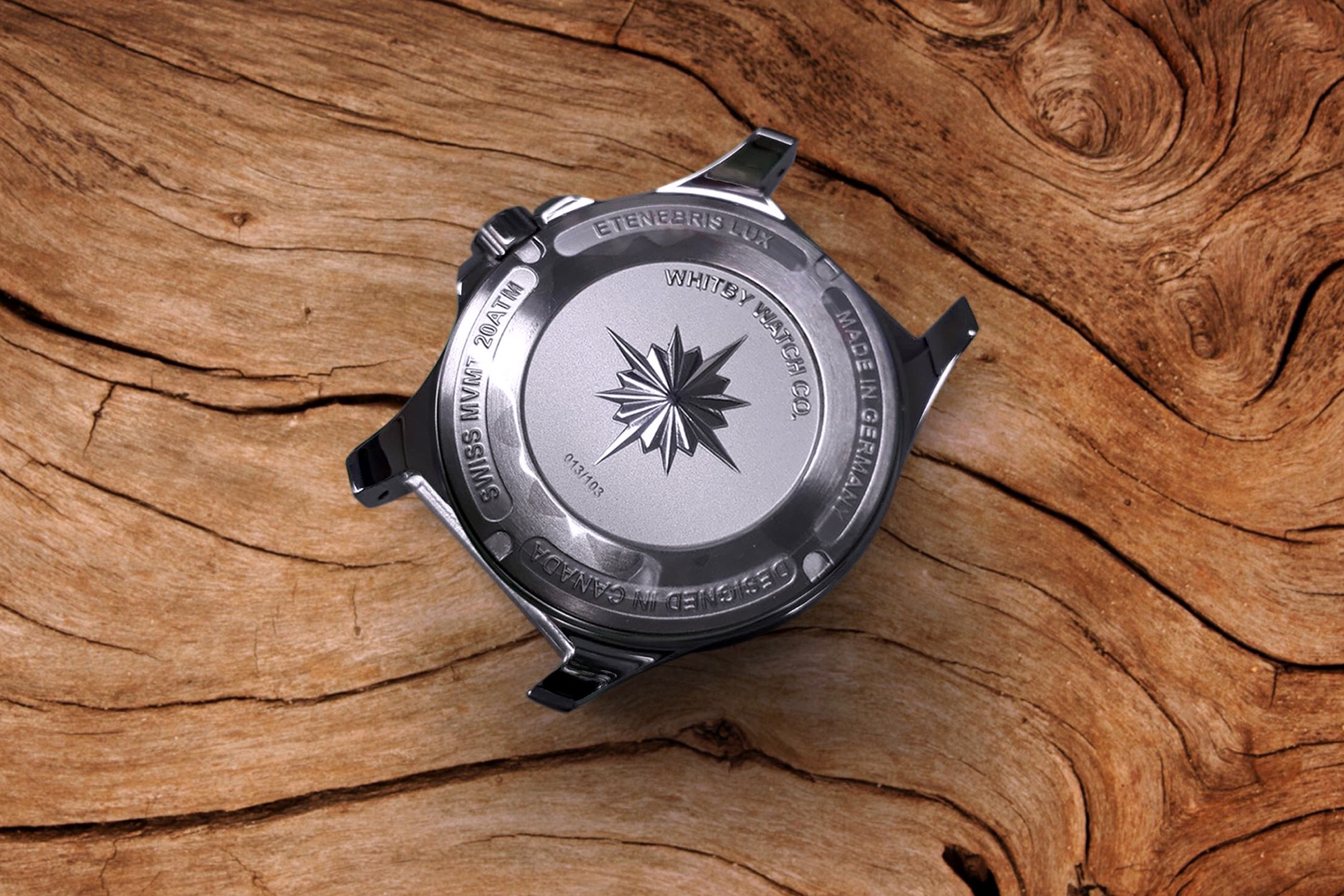 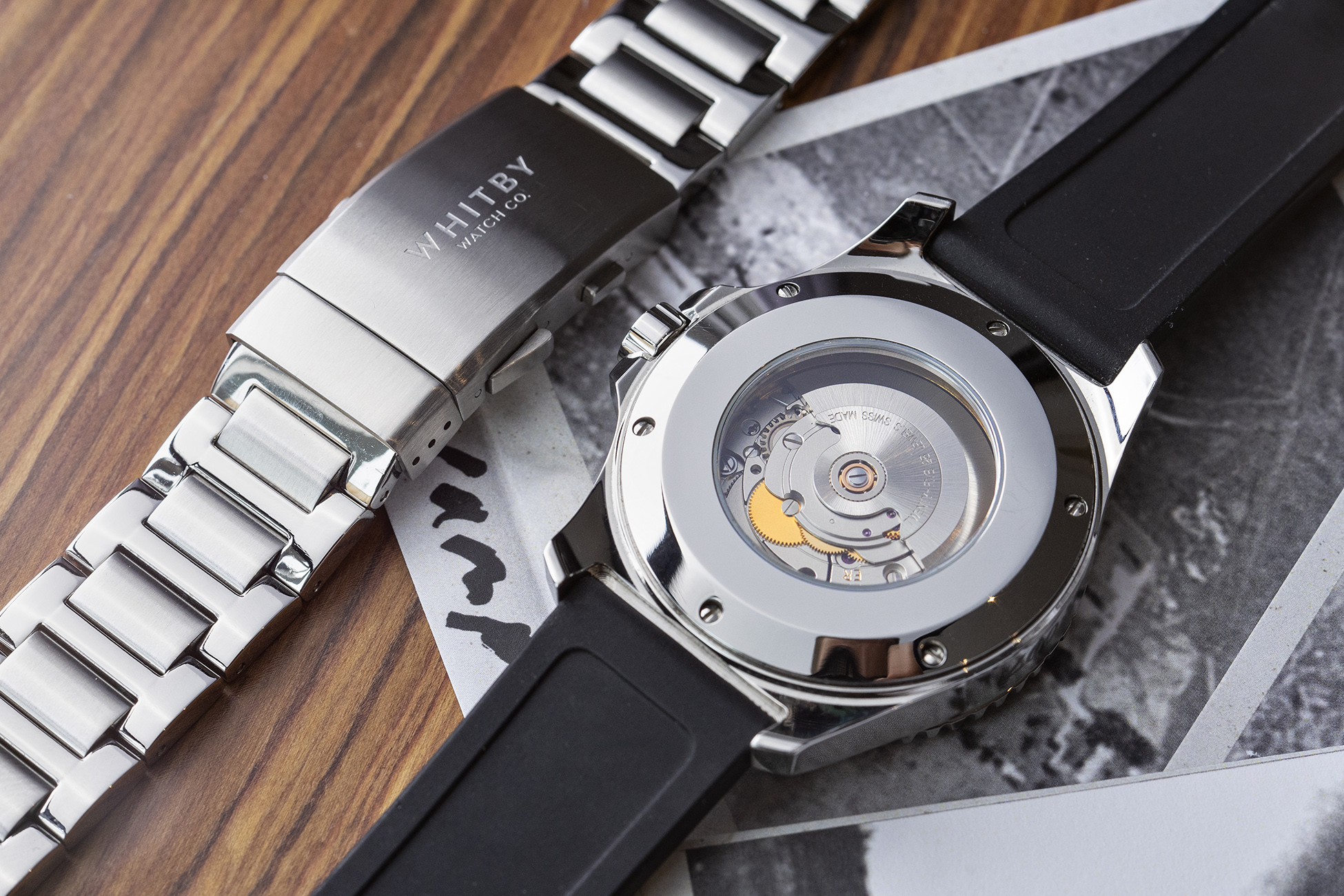 This display case back was for prototype preview purposes only. However, The ETA 2824-2 movement you see is what you get in the production model.

The uni-directional bezel is good and chunky, although the design of the insert does really remind me of the Omega Seamaster 212.30.41.20.01.003. Still, it operates crisply and there are no functional concerns when giving it a twist. It’s legible and functional, although perhaps it could be a bit more unique.

Applied indices mark each hour on the Whitby Watch Co. Intrepid Diver, and the markers do compliment the hands quite well. Pad-printing on the dial is crisp, and the date window is trimmed out to match the applied indices. A subtle sunburst finish is applied to the base of the dial, and all of this is viewable through the AR-coated sapphire crystal. 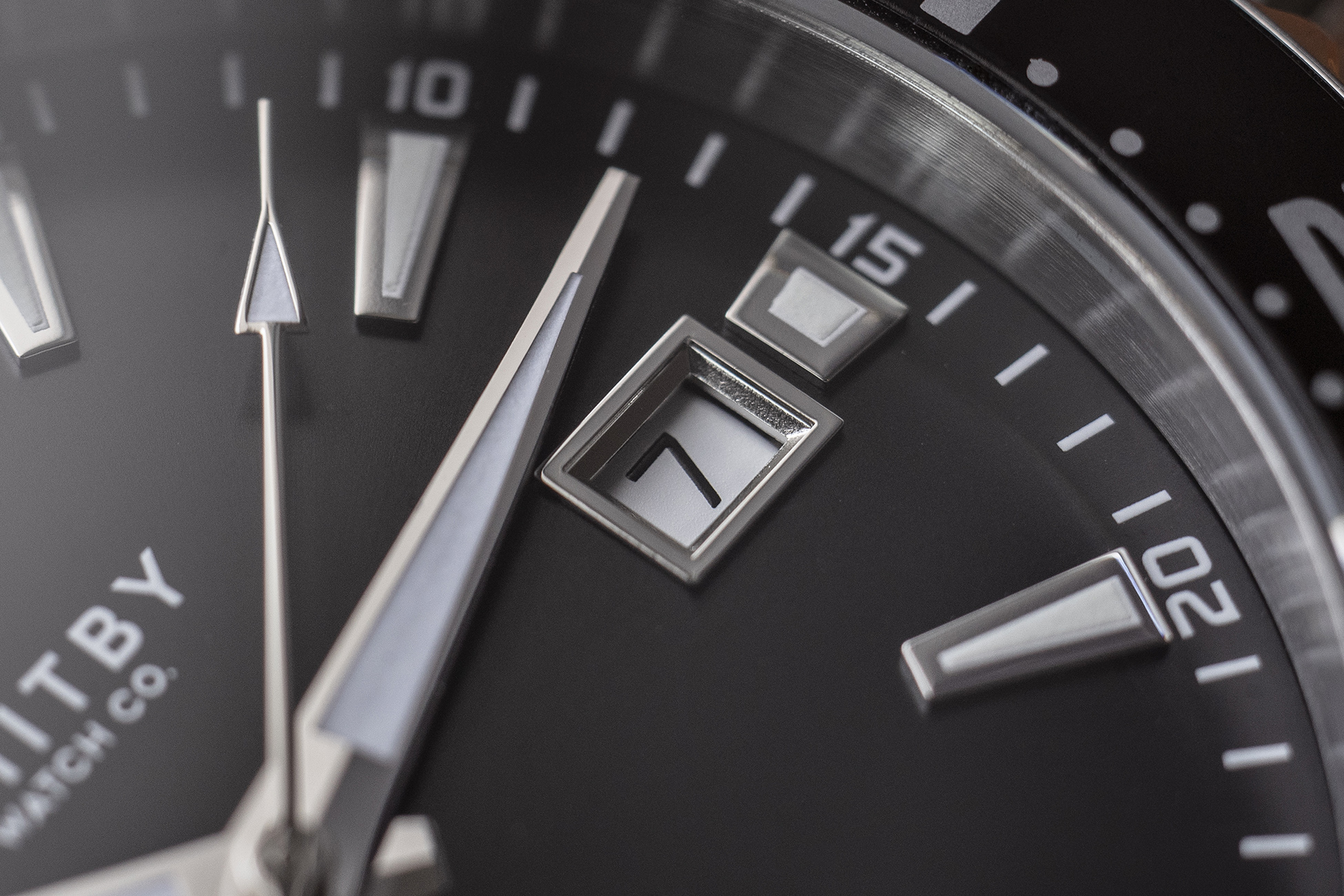 A pin buckle silicone strap was fitted to the Intrepid Diver for my review. The bracelet was included but without end-links for me to try it out. Polished H links with brushed centers and clasp made up the hefty linkage on what I did receive. Definitely substantial and weighty. Although I didn’t get a chance to try it out, the construction and clasp quality surely increase the bang-per-buck factor.

On the wrist, the watch wears well, though 44mm is large for me — but the short lugs made this a good fit for my wrist. It does sit a bit tall to fit under the cuff of my formal shirts, but I think it’s more suited for casual attire and active wear. 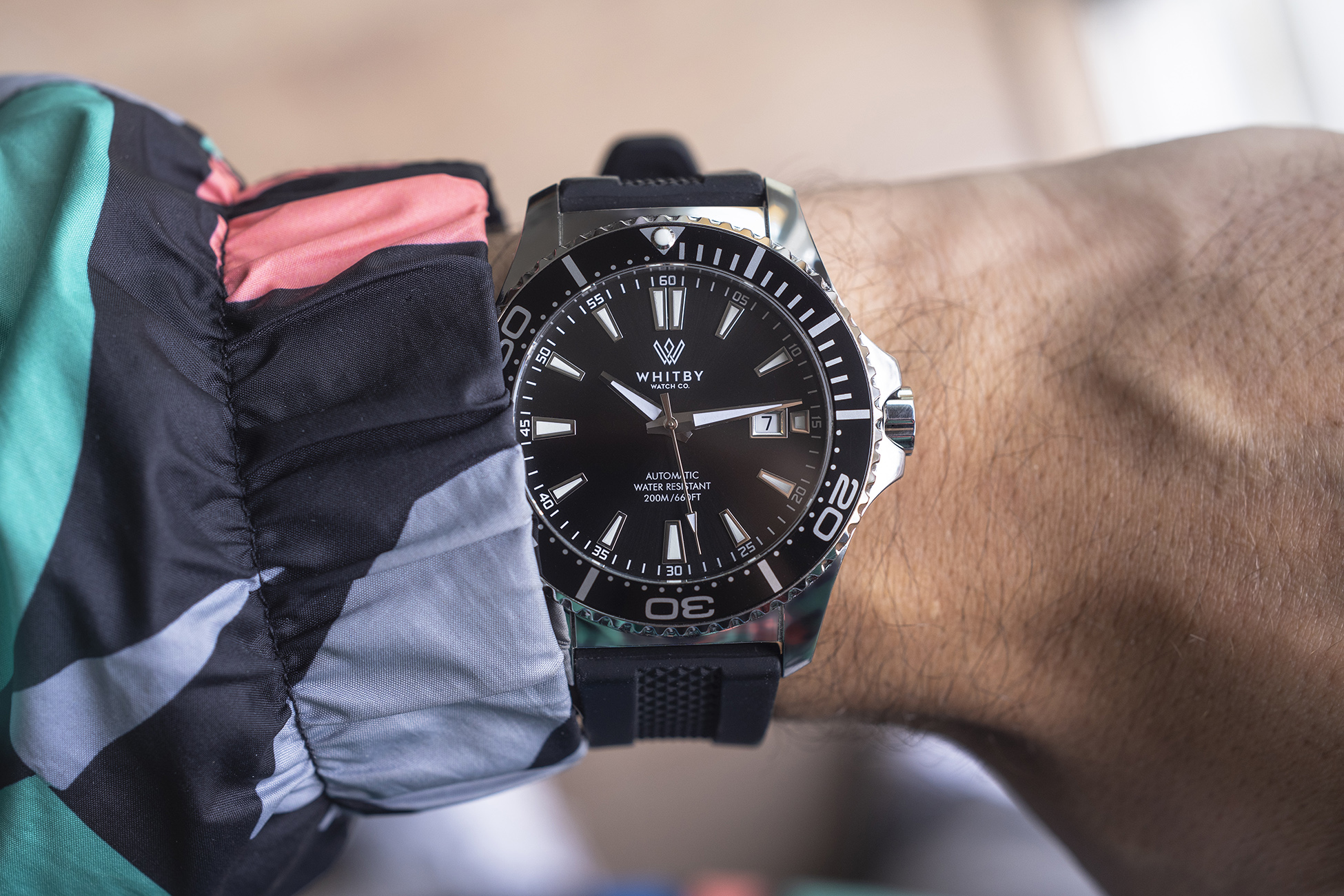 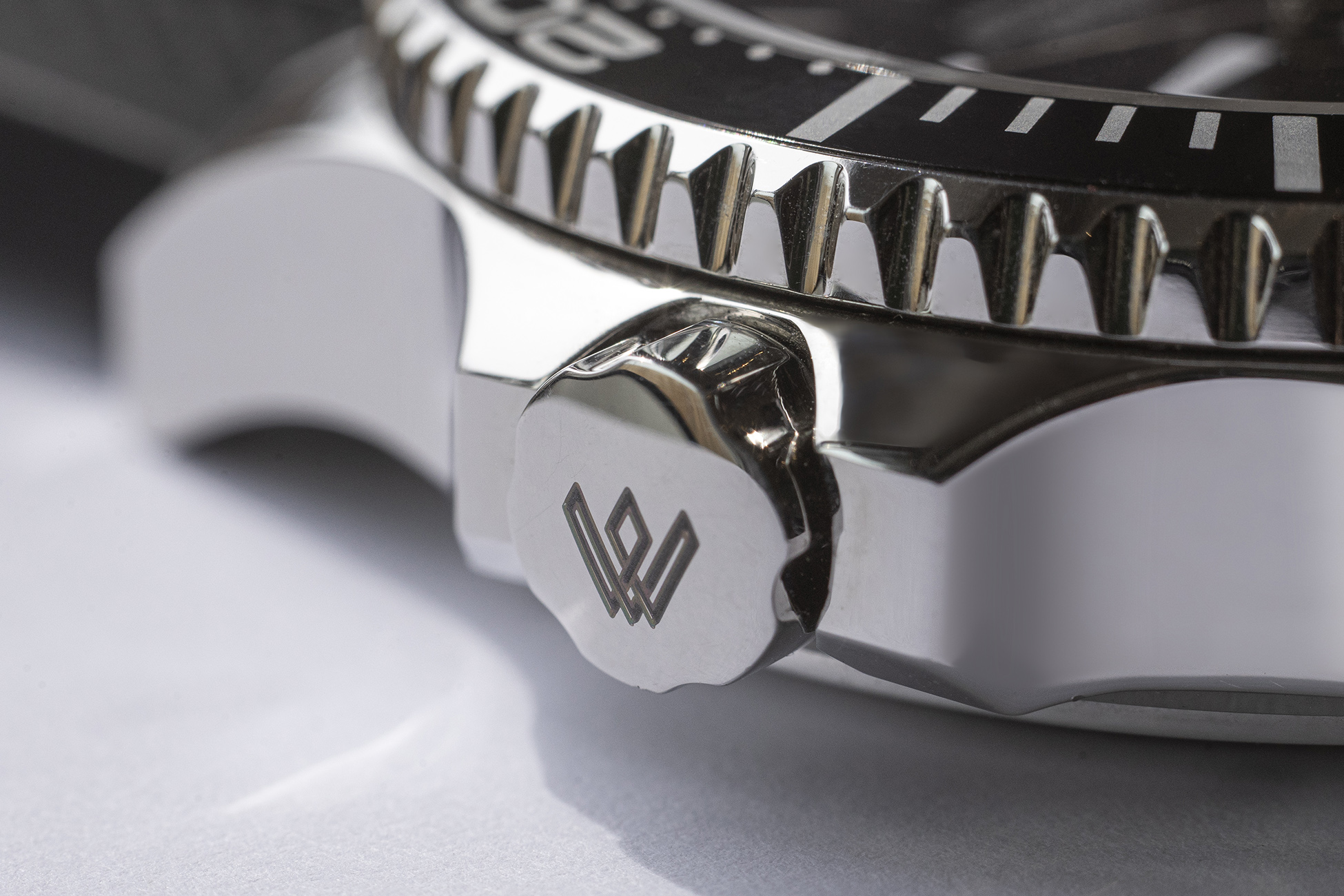 It’s sporty and technical looking overall, and although it certainly doesn’t appear to be of the era of William Stephenson, I don’t think a throwback design would have been the right call, either. If Camp X were still in operation today, perhaps this would be what they handed out to modern-day agents of espionage in the Great White North. The government would likely appreciate the sticker price, too, at $700 CAD for each Intrepid Diver. 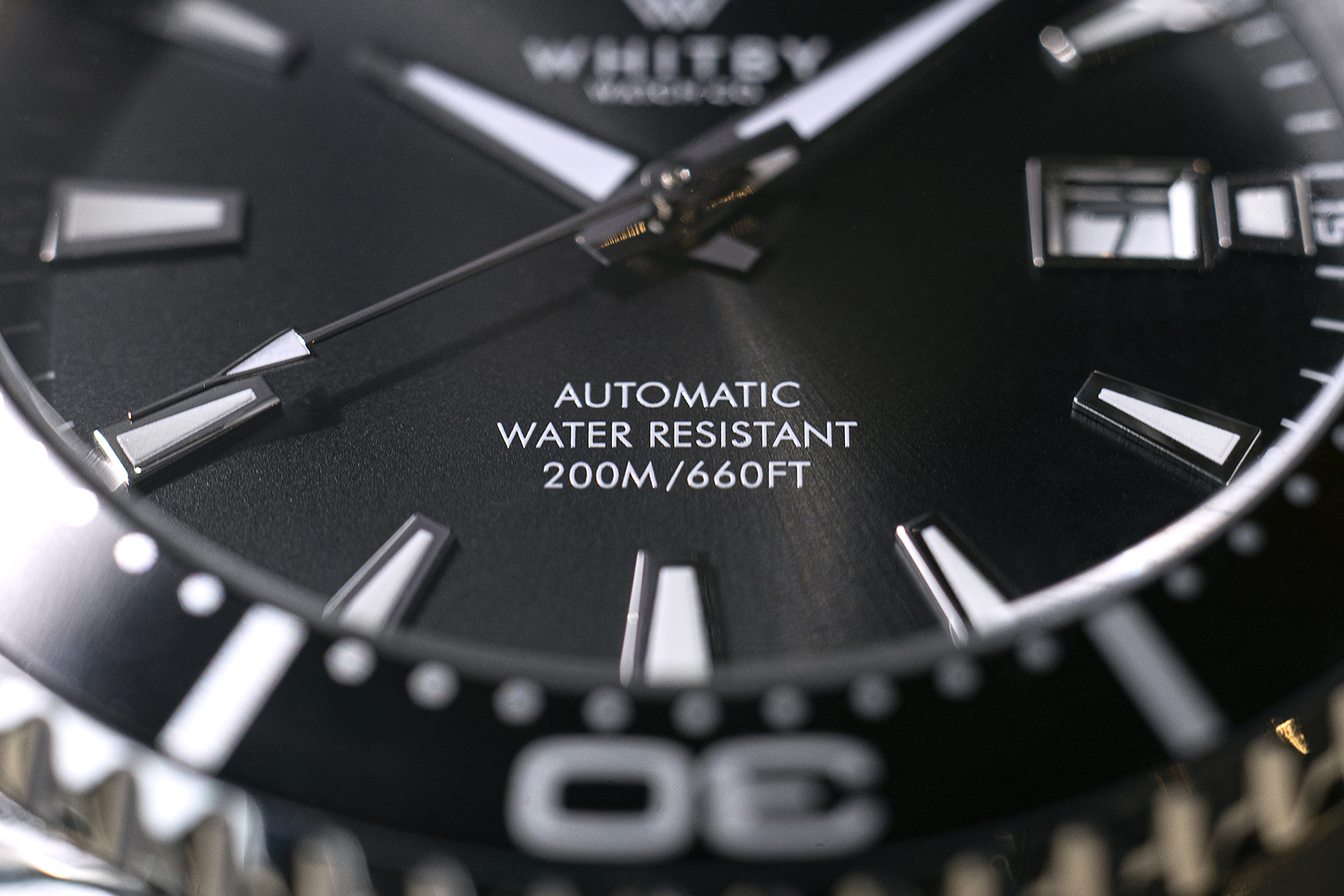 So, do I think Whitby Watch Co. was successful in its mission? Is the Intrepid Diver an affordable watch that delivers on quality and experience? I think so. Although the design isn’t groundbreaking, the quality and clever presentation certainly make for the right experience. Co-founder Jay Harrison obviously cares about the mission of Whitby Watch Co., and I hope the Intrepid Diver helps inspire budding enthusiasts around the globe.

The Whitby Watch Co. Intrepid Diver is available in three colorways and priced at $522 USD. Check it out at whitbywatchco.com, and embrace some wrist-worn Canadian content.