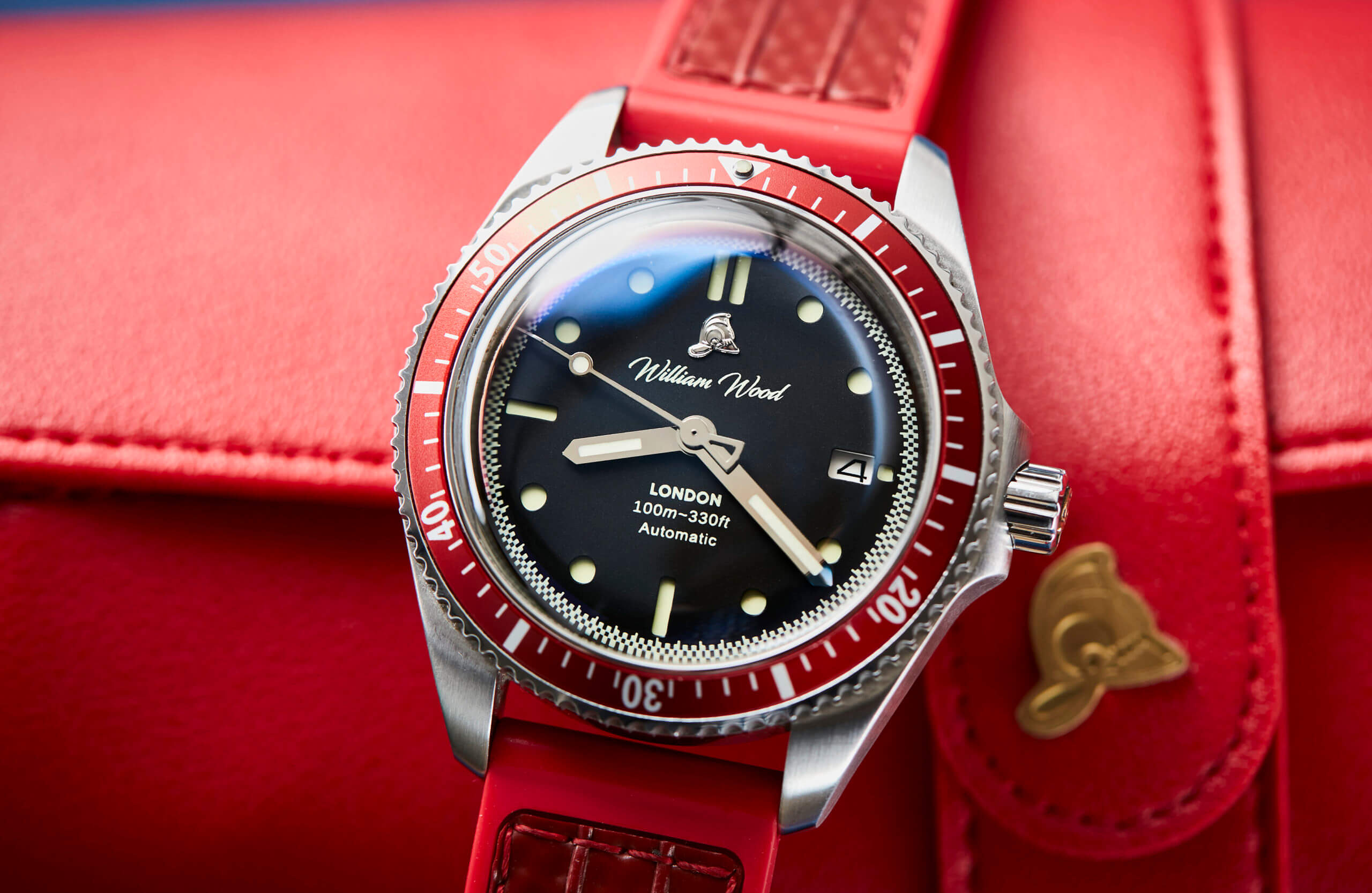 3 Comments
by SponsoredPost
Sponsored post presented on aBlogtoWatch by advertiser

British brand William Wood Watches is the brainchild of Jonny Garrett, the grandson of William Wood, an esteemed British firefighter with 25 years of service and a host of accolades to his name. It’s his grandfather’s story of courage and perseverance that led Garrett to honor him with a watch brand designed around his core values. In addition to offering quality timepieces with original design elements, William Wood Watches utilizes upcycled rescue-service materials in the production of its luxury watches. The new limited-edition Valiant Collection is the most recent line from the brand, which has also raised $10,000 this year for charities helping victims of the Australian Bushfires in January and supporting International Firefighters’ Day in May.

Since its launch in 2016, William Wood has grown to sales of a quarter-million GBP with 600 customers across more than 30 countries around the globe. Garrett’s vision is to convert a defunct British fire station into the company’s future headquarters.

The Valiant Collection, which debuted five months ago, is a diver’s series that is gaining momentum for its creative features, including straps made from upcycled British fire hoses used by the UK Fire & Rescue Service for more than a decade, and crowns made from a 1920s London Fire Brigade brass helmet, crafted in the heart of London’s iconic jewelry district. And remarkably, the price tag is under £1,000. 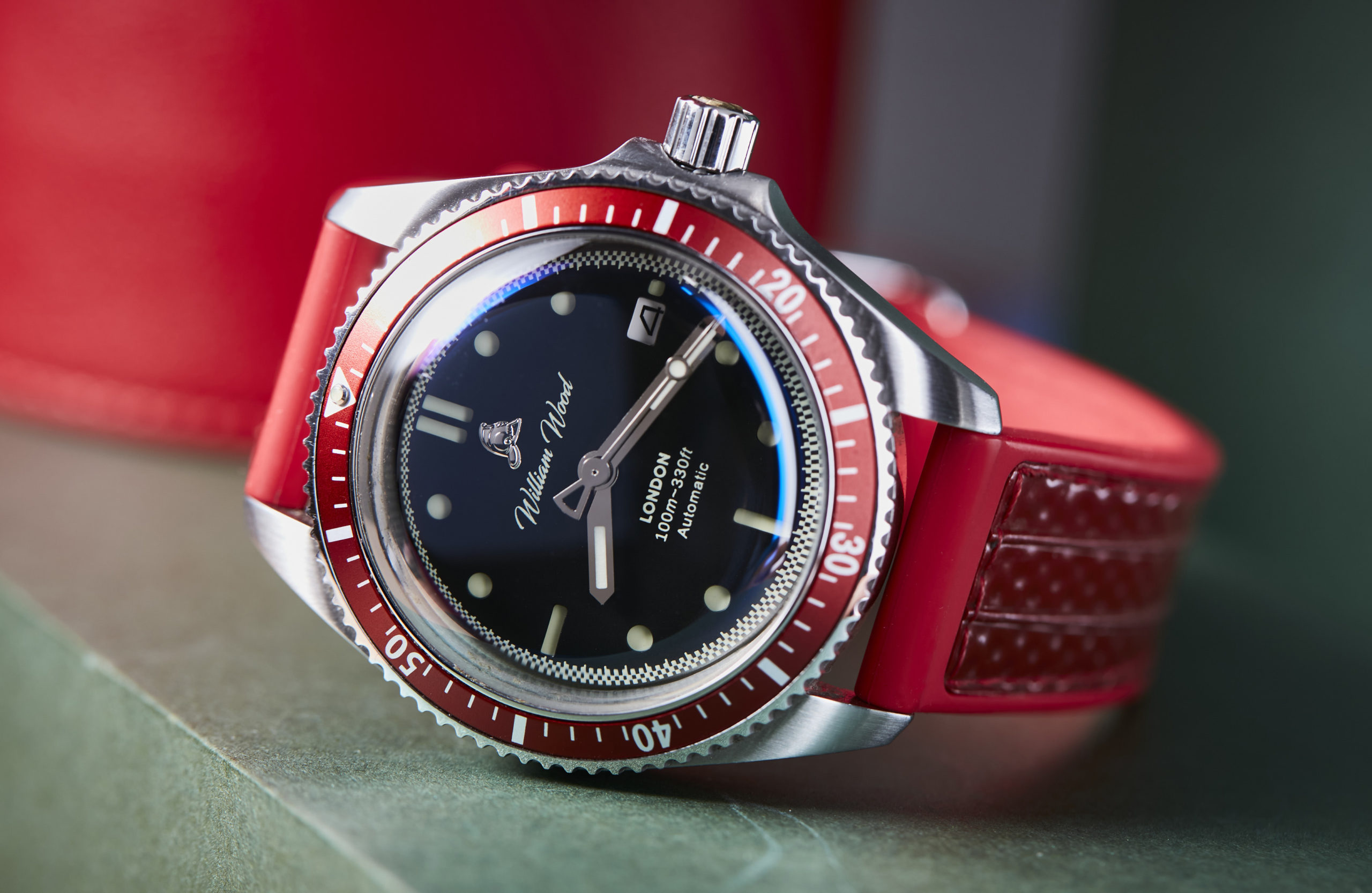 A watch’s movement is, arguably, the most important aspect of a timepiece purchase. One of the unique features of the William Wood Valiant Collection is that, because the 41mm case fits both a Swiss ETA 2824 automatic movement and a Japanese Seiko NH35 automatic movement, you’re able to choose the movement that’s right for you and your budget. The Red Watch (model above) with the Seiko movement is priced at £695 and comes with red fire hose straps and a red travel roll that holds up to three watches. The ETA option for the same watch and accessories sells for £995. If you forgo the fire hose straps, each model goes for £595 and £895, respectively. 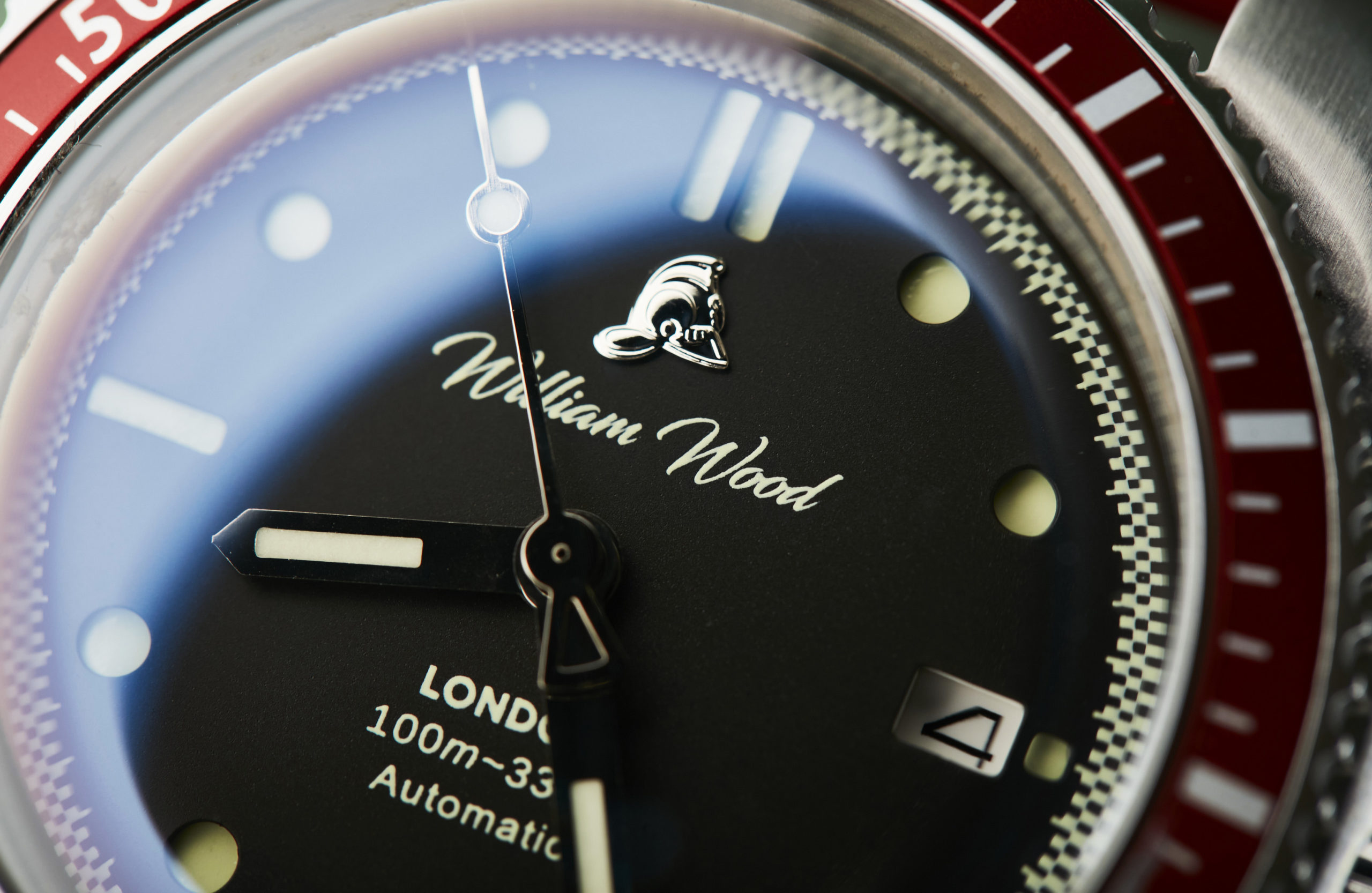 The design of the watch has been thoroughly planned, evidenced by the subtle design features in tribute to the fire service, which are not too overt. The two stripe indices located at 12 o’clock represent the markings a crew manager in the UK Fire & Rescue Service would have on their uniform lapel. Printed around the perimeter of the dial is what looks to be an Omega-style checkered racing flag. In fact, this is the exact checkered marking design found on the side of a British fire engine. The sweeping seconds hand has been designed to look like the chime from an old fire engine bell. All understated yet complementary to the watch and Garrett’s grandfather’s story. 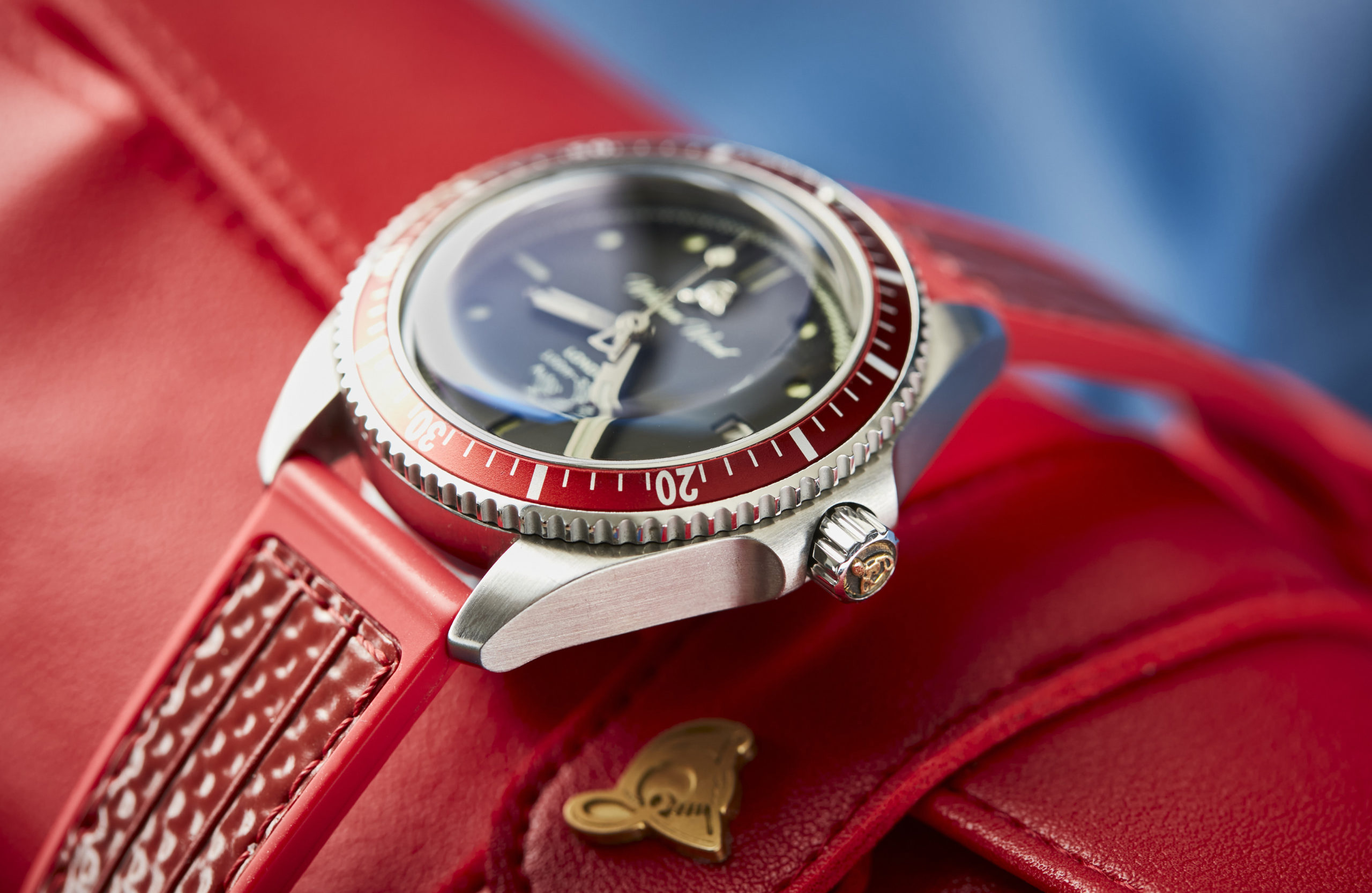 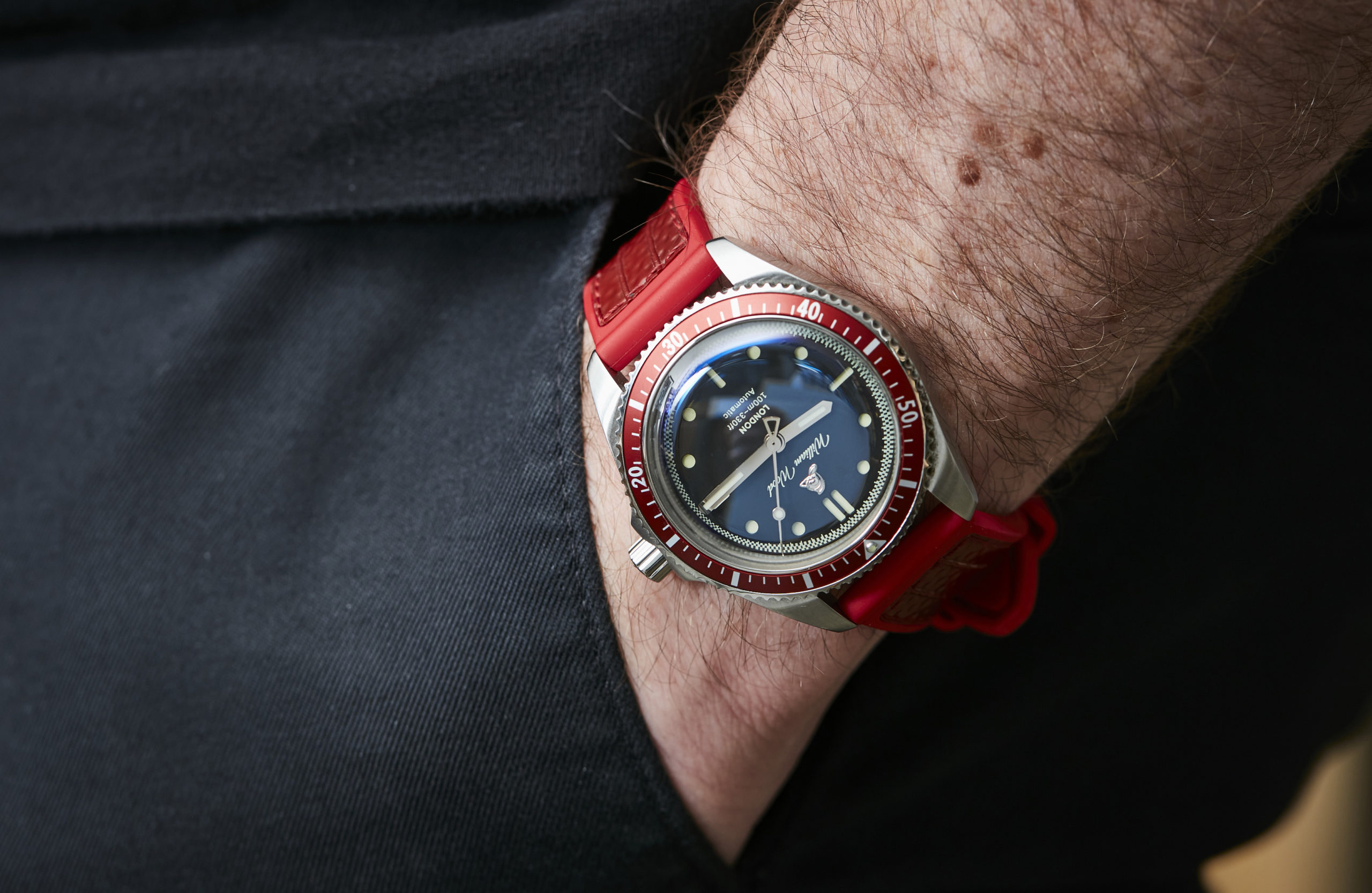 But the upcycling is, by far, the coolest element of this collection. Visibly striking when looking at the side of the watch is not only the double-domed sapphire crystal glass (tinted blue in tribute to Mr. Wood’s 25-year tenure on The Blue Watch in the British Fire Service) but also the contrast between the vintage upcycled watch crown (made from a melted down 1920’s firefighter brass helmet, as stated above) and the modern brushed stainless steel case. The crown is stamped with the William Wood Watches iconic logo boasting the side profile of a vintage British firefighter’s helmet. And the fire hoses used to make the straps would normally be marked for landfill — William Wood has given them a new life that also results in a unique look at feel on the wrist. 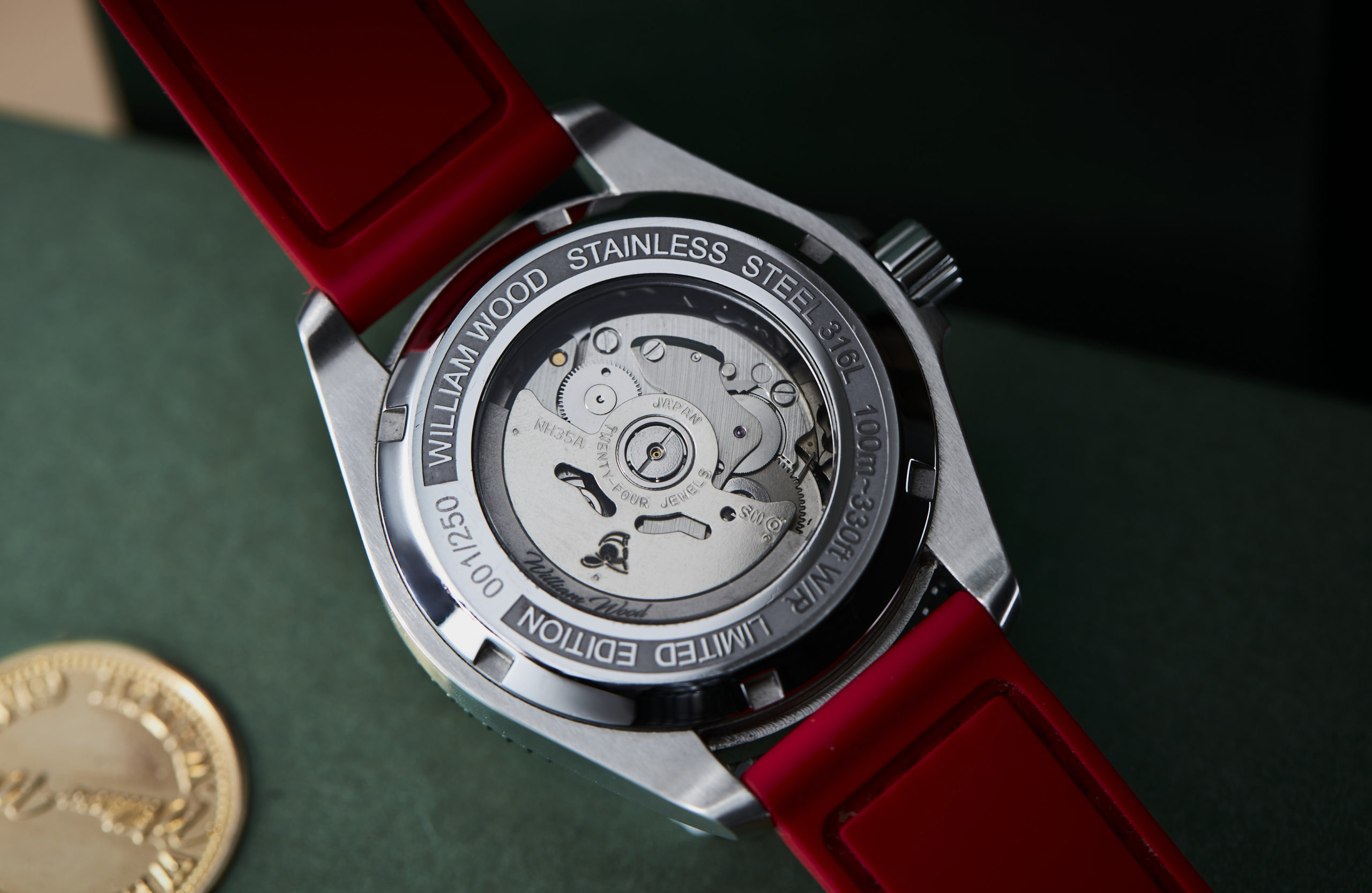 Let us not forget that this is also a functional diving watch, with a screw-down crown and 100 meters of water resistance. The indices, hands, and 12 bezel dots are all coated with Super-LumiNova, allowing you to tell the time in darker conditions. Each watch is engraved with a limited-edition number up to 250 in all five colors — black, white, blue, rose, and the iconic fire-engine red. 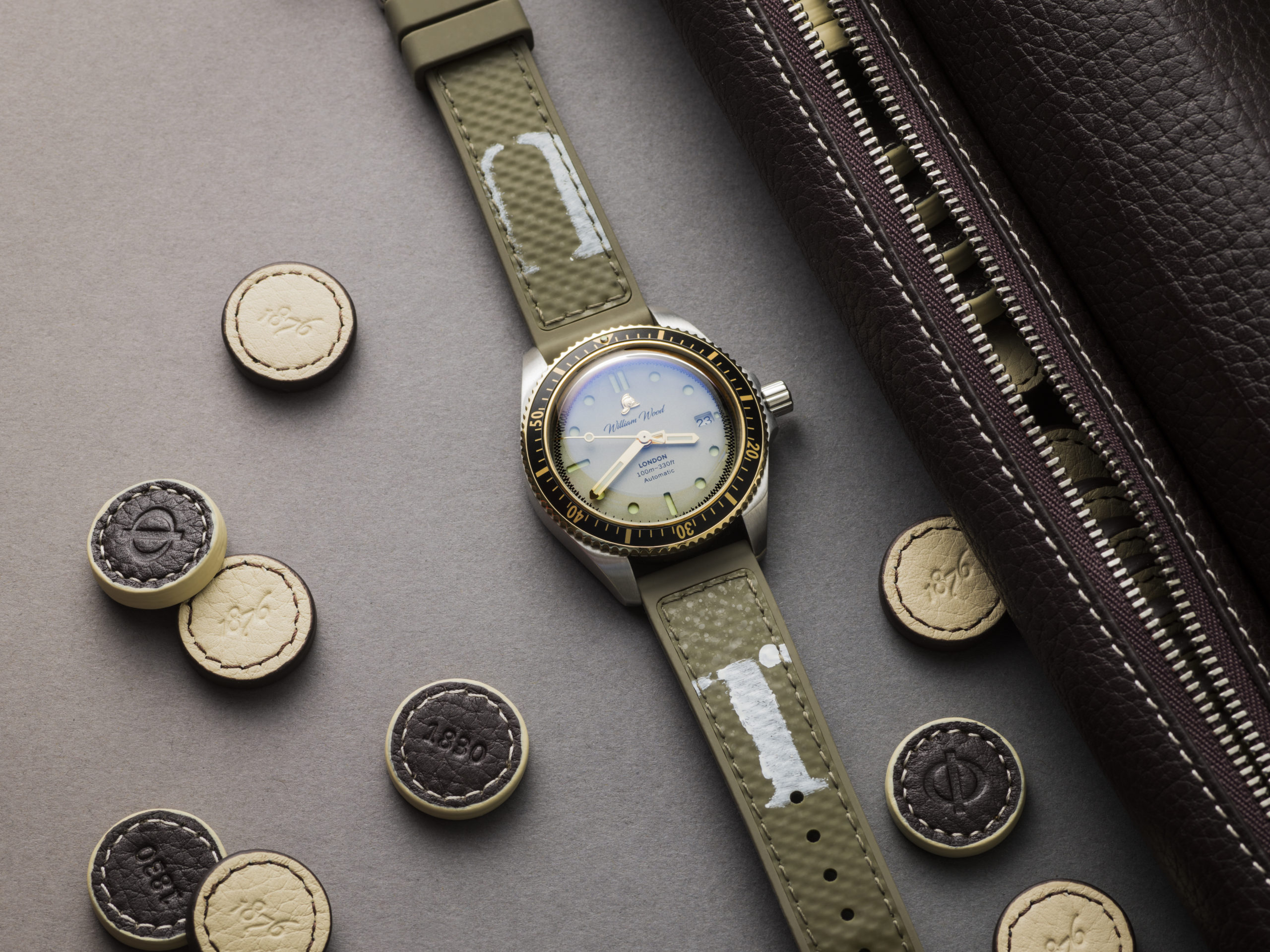 Again, the price for all colors (each limited to 250) begins at £595 with the Seiko NH35 automatic movement on metal bracelet and £895 with the Swiss ETA 2824 automatic movement on metal bracelet. (Add £100 on either model for the fire hose strap.) For more information about William Wood Watches Valiant Collection you can find further information at their website www.williamwoodwatches.com.