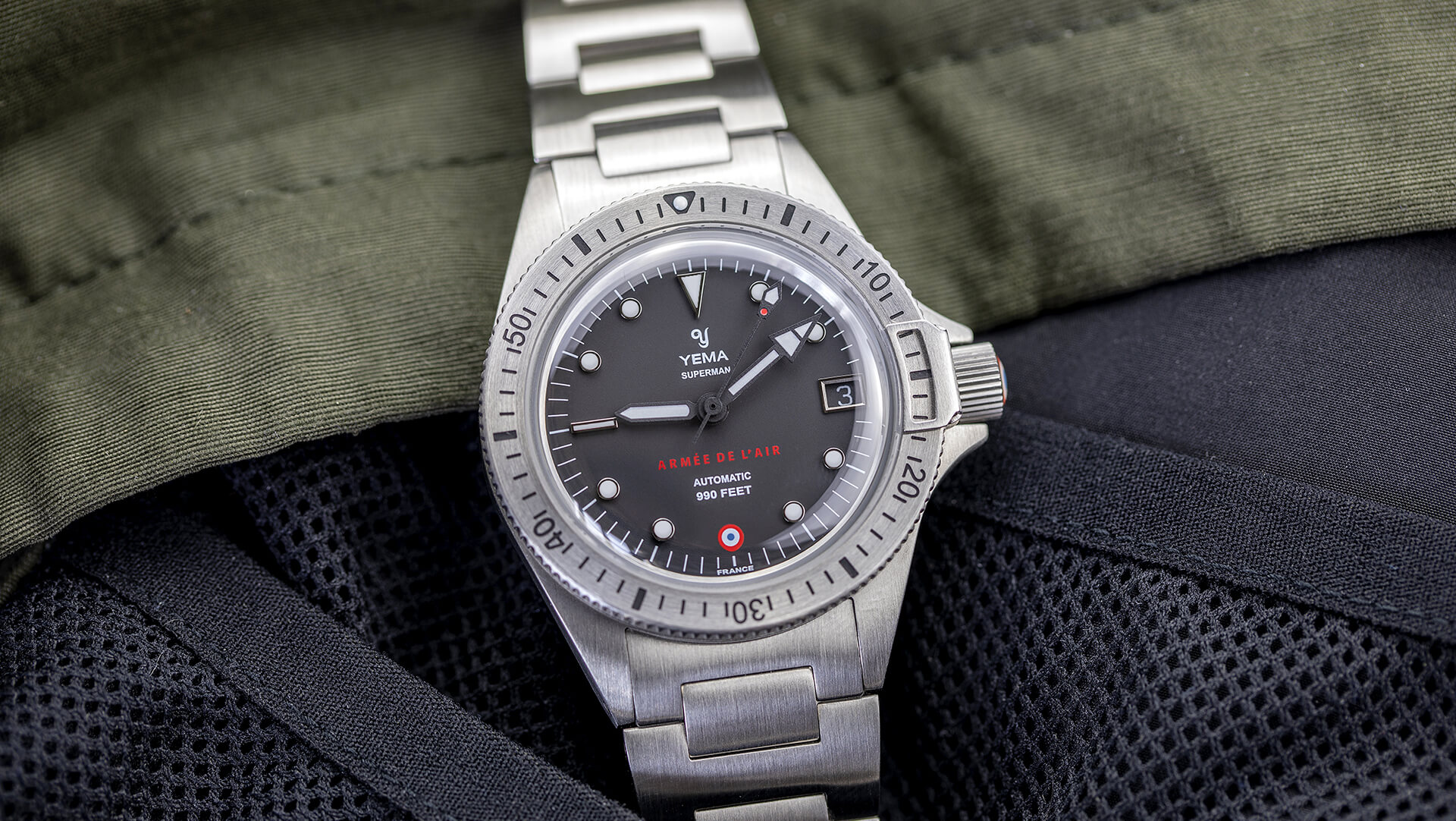 For nearly 50 years, French watchmaker Yema has proudly served France’s armed forces, providing a variety of timepieces to multiple branches of the military. As the brand continues this patriotic legacy into 2020, it has created two new additions to its Superman Heritage lineup of dive watches at the request of the Armée de L’Air, or French Air Force. The limited edition Yema Superman French Air Force series pays tribute to Yema’s very first watch for the Armée de L’Air in the 1970s, combining Yema’s finest modern watchmaking techniques with the iconic Superman design to meet the exacting specifications of the Armée de L’Air’s elite helicopter search and rescue divers and fighter pilots. Far from just a handsome tribute to France’s heroic aviators, these special timepieces will be offered first to Armée de L’Air personnel and partial proceeds from all sales will go to benefit FOSA, the official French Veterans Foundation. 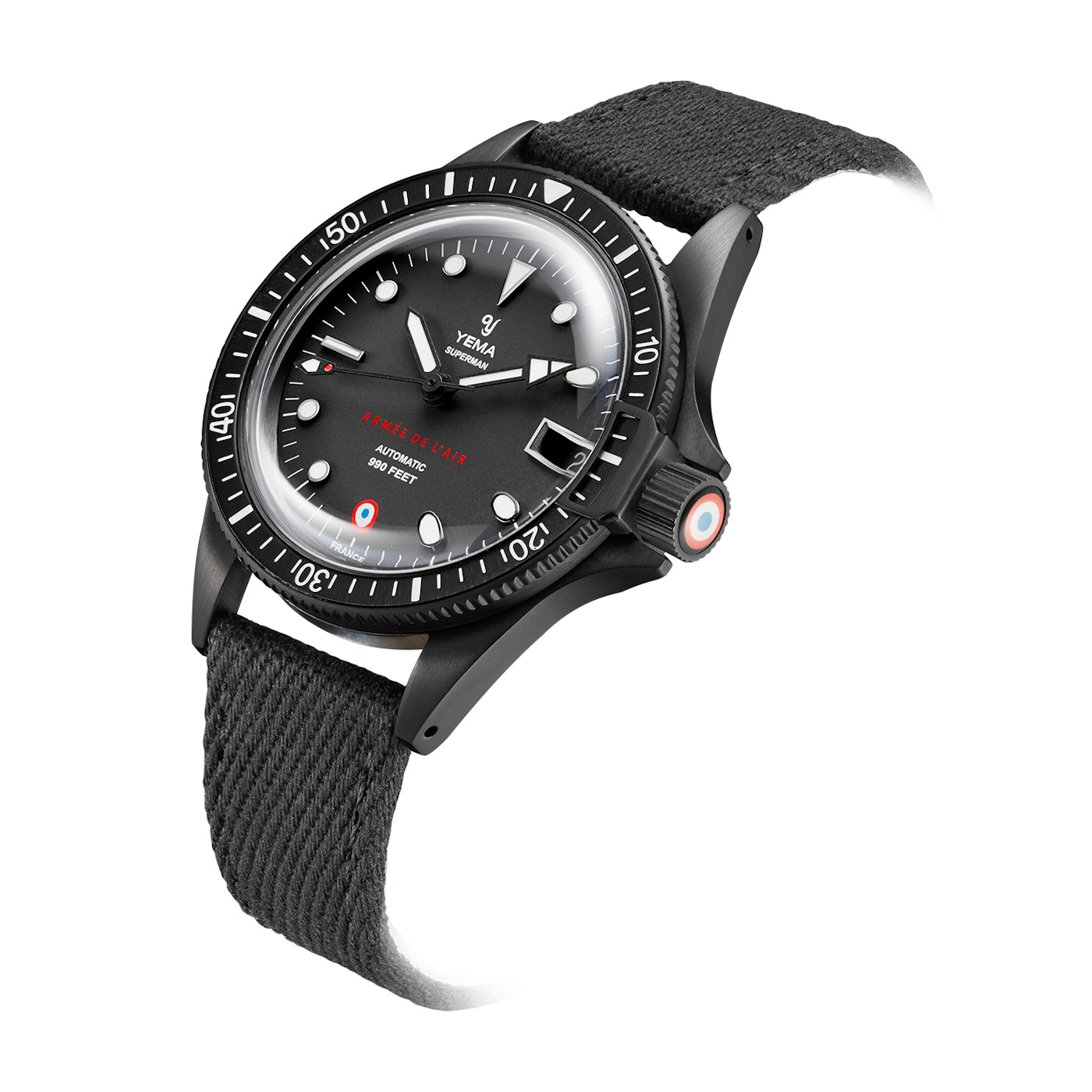 Both versions of the Yema Superman French Air Force begin with the compact and classic 39 mm stainless steel case of the Yema Superman Heritage. The athletic tapering lugs and unique bezel locking mechanism of the Superman Heritage remain, but the classic dive watch design has been substantially reworked for military service. The standard bezel insert has been replaced with a unique brushed stainless steel rotating bezel for a more cohesive look, while polished surfaces are eliminated completely from the case in favor of an aggressive overall brushed finish to reduce unnecessary glare in the cockpit. If a mission calls for greater stealth than brushed stainless steel can provide, the Superman French Air Force is also available with a matte black PVD finish, providing a modern flair to this classic design. Both the brushed stainless steel and black PVD versions of the Yema Superman French Air Force also add unique design touches in tribute to the tireless work of the Armée de L’Air. The screwdown crown at 3 o’clock is now signed with a vibrant tricolor roundel, the unmistakable insignia of the Armée de L’Air since World War I. The distinctive caseback features the sharply embossed crest of France’s Armée de L’Air, flanked by a limited edition serial number. Even with these unique additions, the case of the Yema Superman French Air Force series is capable of a robust 990 feet of water resistance, making this the perfect tool for the Armée de L’Air and its demanding mission requirements both in the air and under the sea. 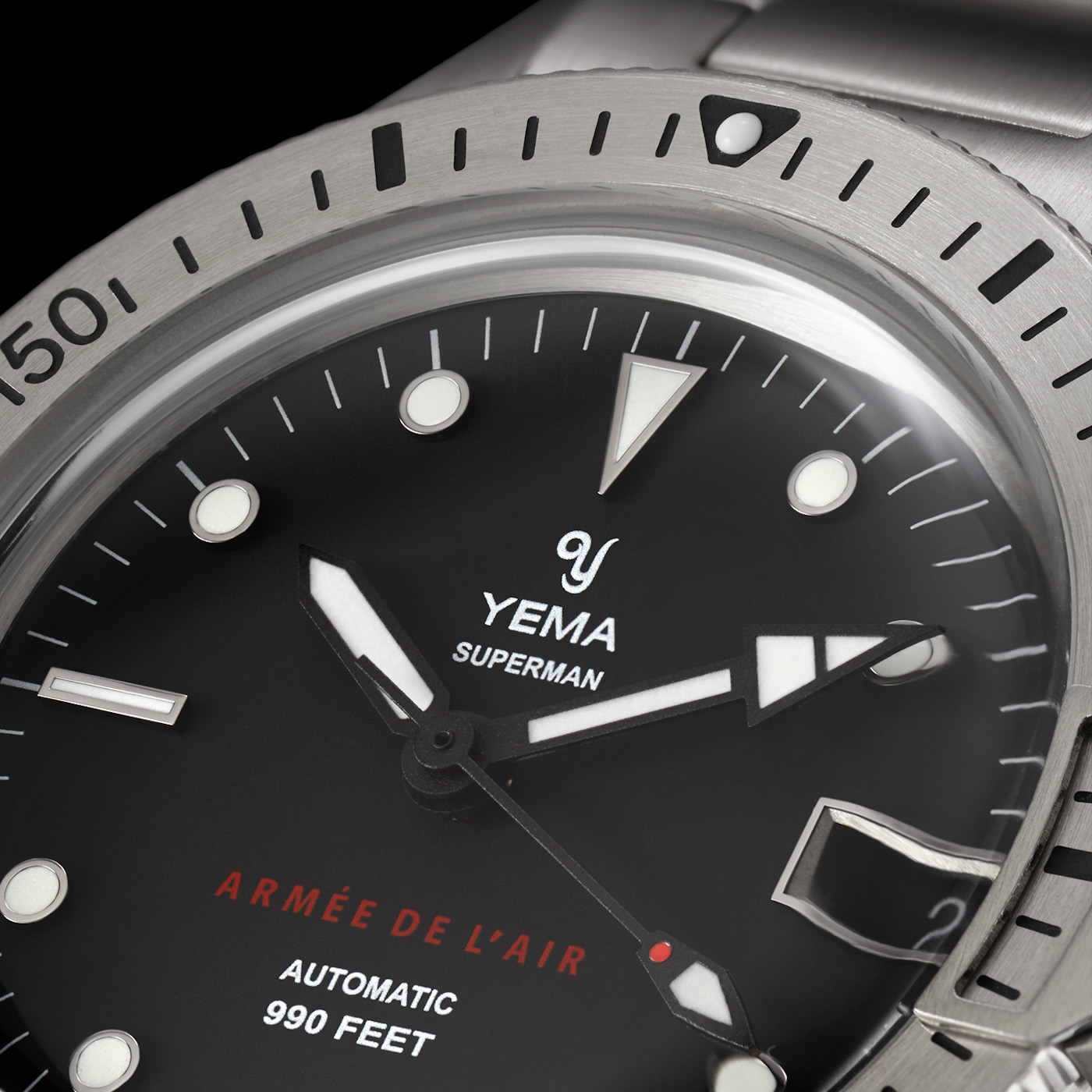 Like the case, the dials of the Yema Superman French Air Force series convert the iconic forms of the Superman into an effective and handsome modern military tool. The dial surface is a clean matte black, while the Superman’s signature sword hours, arrow minutes, and shovel seconds hands have been PVD treated in black for reflection-free legibility from any angle. The large applied dive watch indices are filled with bright Super-LumiNova C1 lume, keeping the wearer’s focus on reading the time as quickly and easily as possible in any conditions. As an added tribute, Yema replaces the 6 o’clock marker with another Armée de L’Air roundel, giving a pop of eye-catching color to the serious military design. 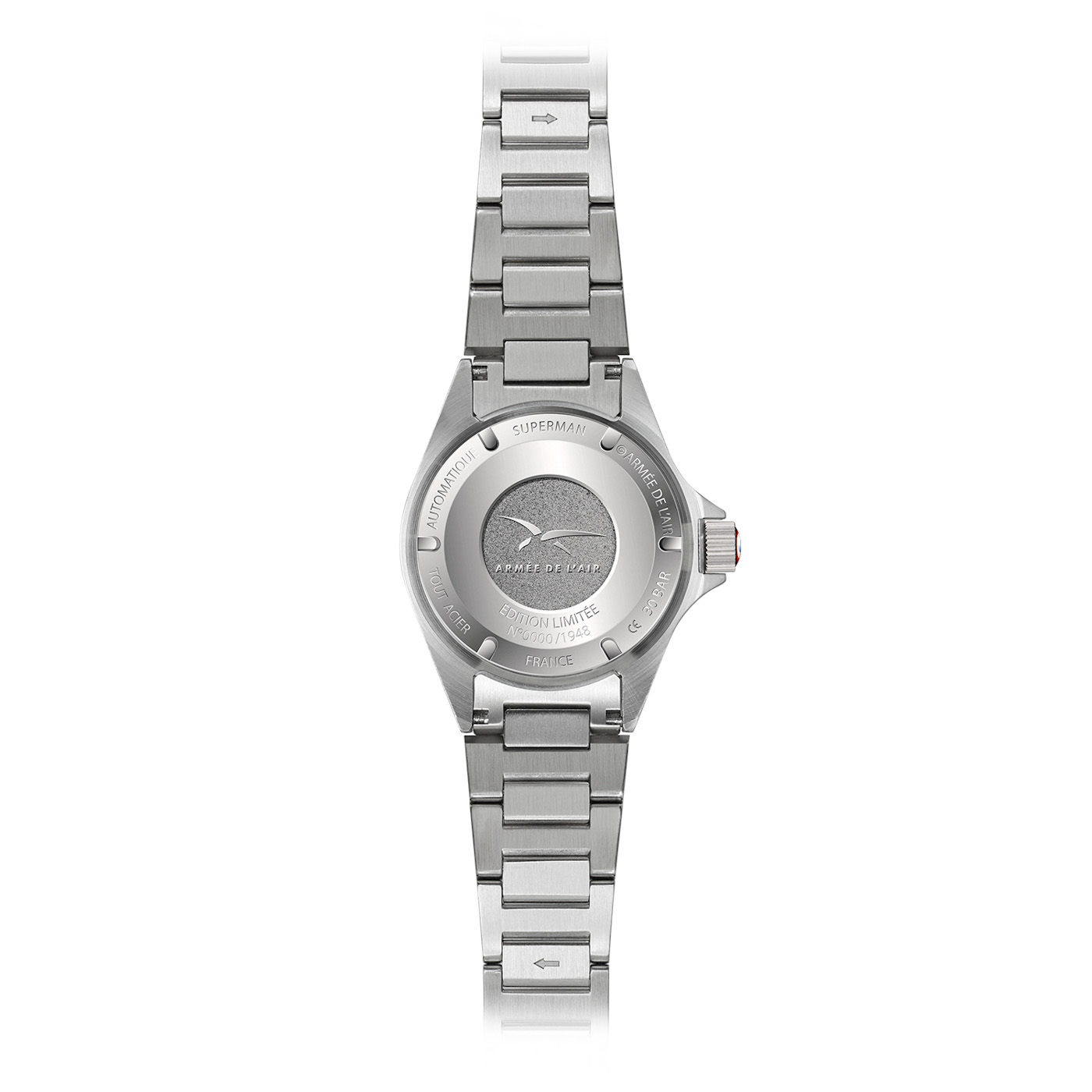 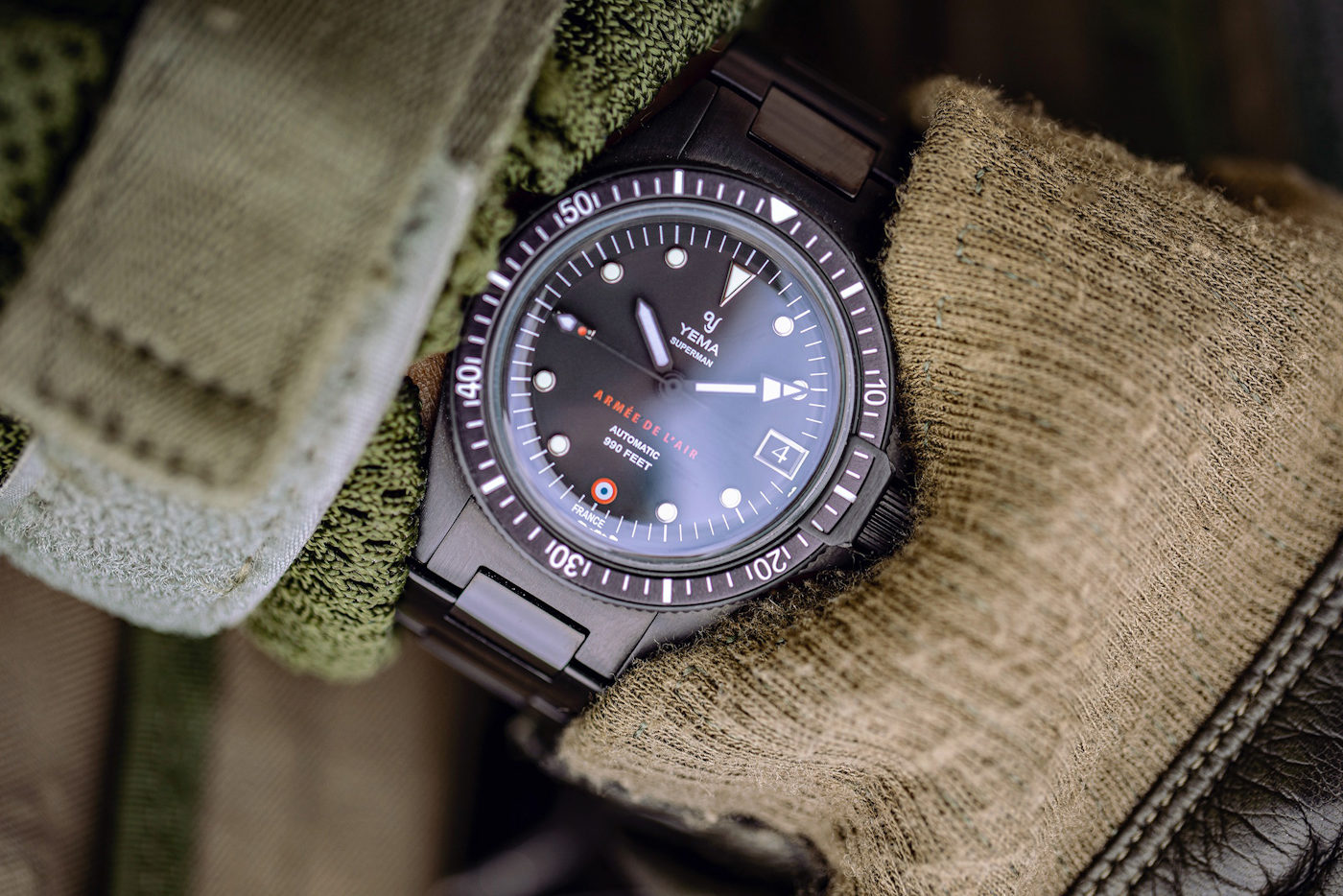 Each Yema Superman French Air Force model is equipped with two durable strap options. The first is a lightweight three link bracelet in 316L stainless steel, finished with a signed extending diver’s clasp. In addition, each watch includes an exclusive leather lined black canvas strap, designed in concert with the Armée de L’Air for comfort and durability in even the direst conditions.

As the latest in a long line of Yema timepieces for the French armed forces, the Yema Superman French Air Force series is a stylish and effective tribute to this decades-long military partnership. Only 1,948 examples of each model will be made, with preorders available now online at a starting price of $999. As an added benefit, 12.5 percent of total sales will be used to benefit French military veterans through FOSA, the official French Veterans Foundation. For more information about these watches, please visit Yema’s website.