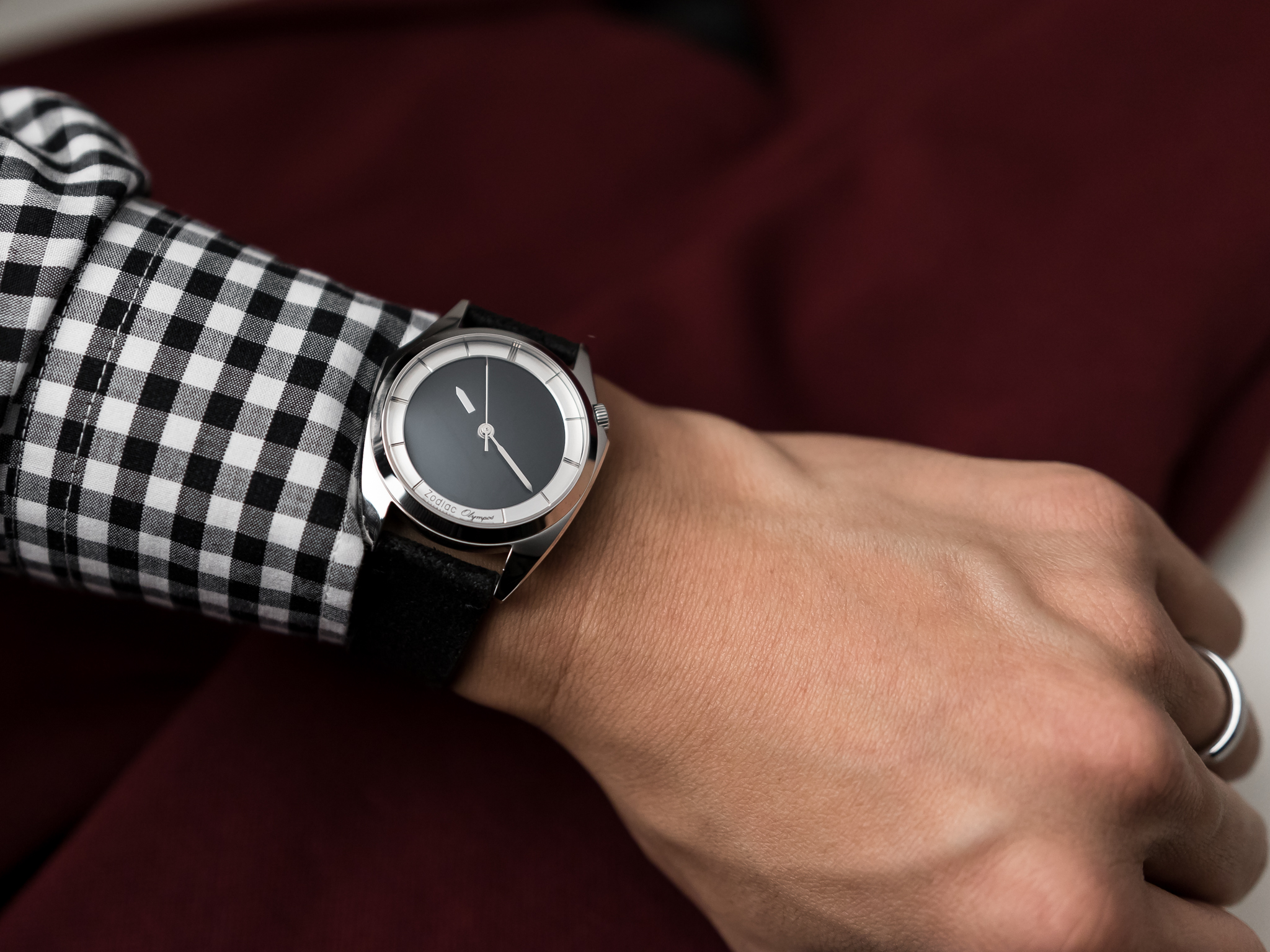 It’s a manta ray… It’s a coffin… It’s Batman? Actually, it’s a Zodiac Limited Edition Olympos Mystery Dial, and if anything, it’s a sharp-lined, asymmetrical watch with tons of retro throwback character. Only, there’s nothing to “throwback” because the watch is virtually identical to the original release from the 1960s. Mystery dials were all the rage back then and almost every watch brand had its own variation on the “complication.”

Let’s start with the elephant in the room; mystery dials in horologically technical terms are not a complication, but a mere whimsy in visual aesthetics and optical trickery. Fortunately, it no less diminishes the fact that, when done properly, can have a very impactful presence on a watch and can also be very complicated to manufacture. And while the mystery dial in itself is usually the star attraction to a timepiece, I actually think it sits third to the Zodiac Olympos’ case design and finishing details. 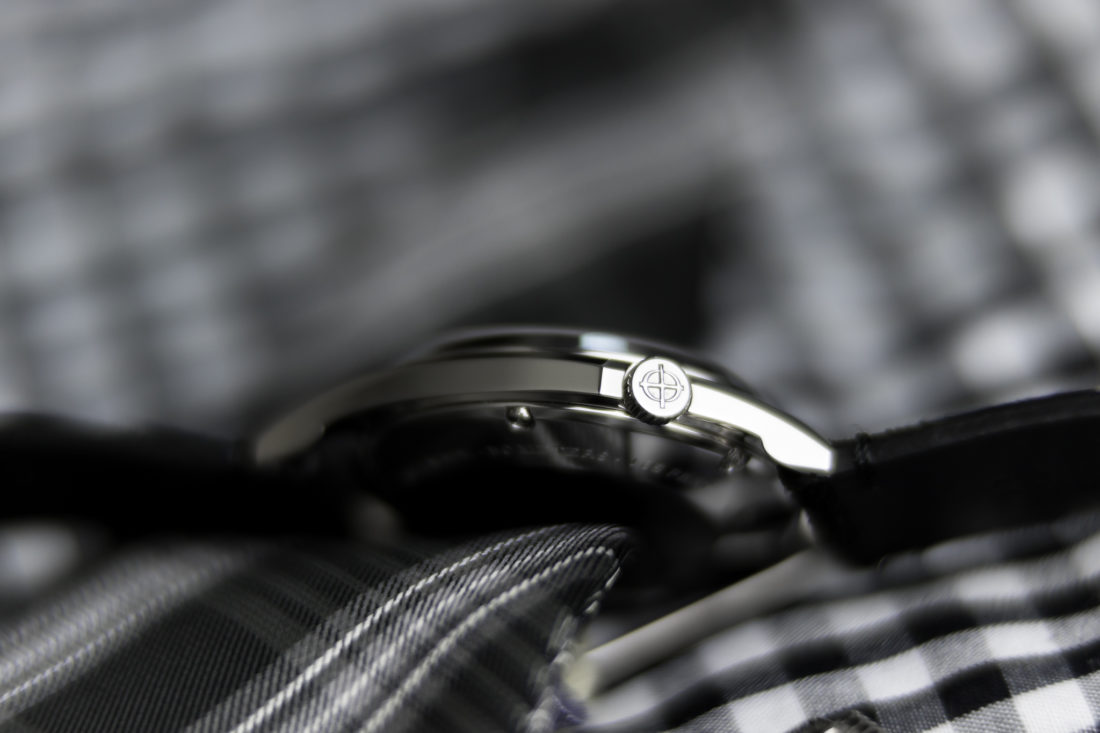 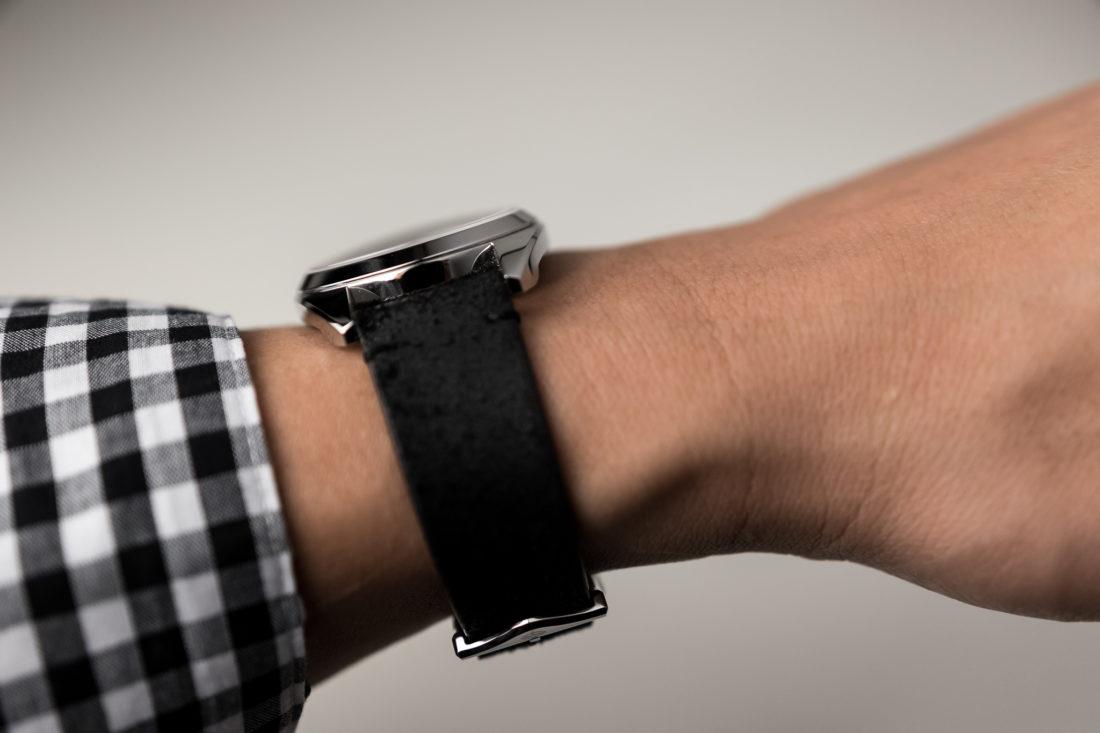 Case dimensions stay roughly the same at 37.5mm horn-to-horn (fin-to-fin?) throughout the entire Zodiac Olympos line-up as well as the two types of finishing, including the “Military Dial” covered here, during its launch at this years Baselworld. Easter egg surprise: in that hands-on review you got to see a glimpse of the Limited Edition Olympos Mystery Dial in the top center of one of the photos.

While I don’t think the Crocodile Hunter would wear this watch even with a nickname regarding the case shape, manta ray, and its lack of usable water resistance, there is a dark knight that would possibly wear it. No, I’m not talking about a mortician, although another nickname for this case is a coffin. I’m talking about Batman, or more precisely Bruce Wayne. 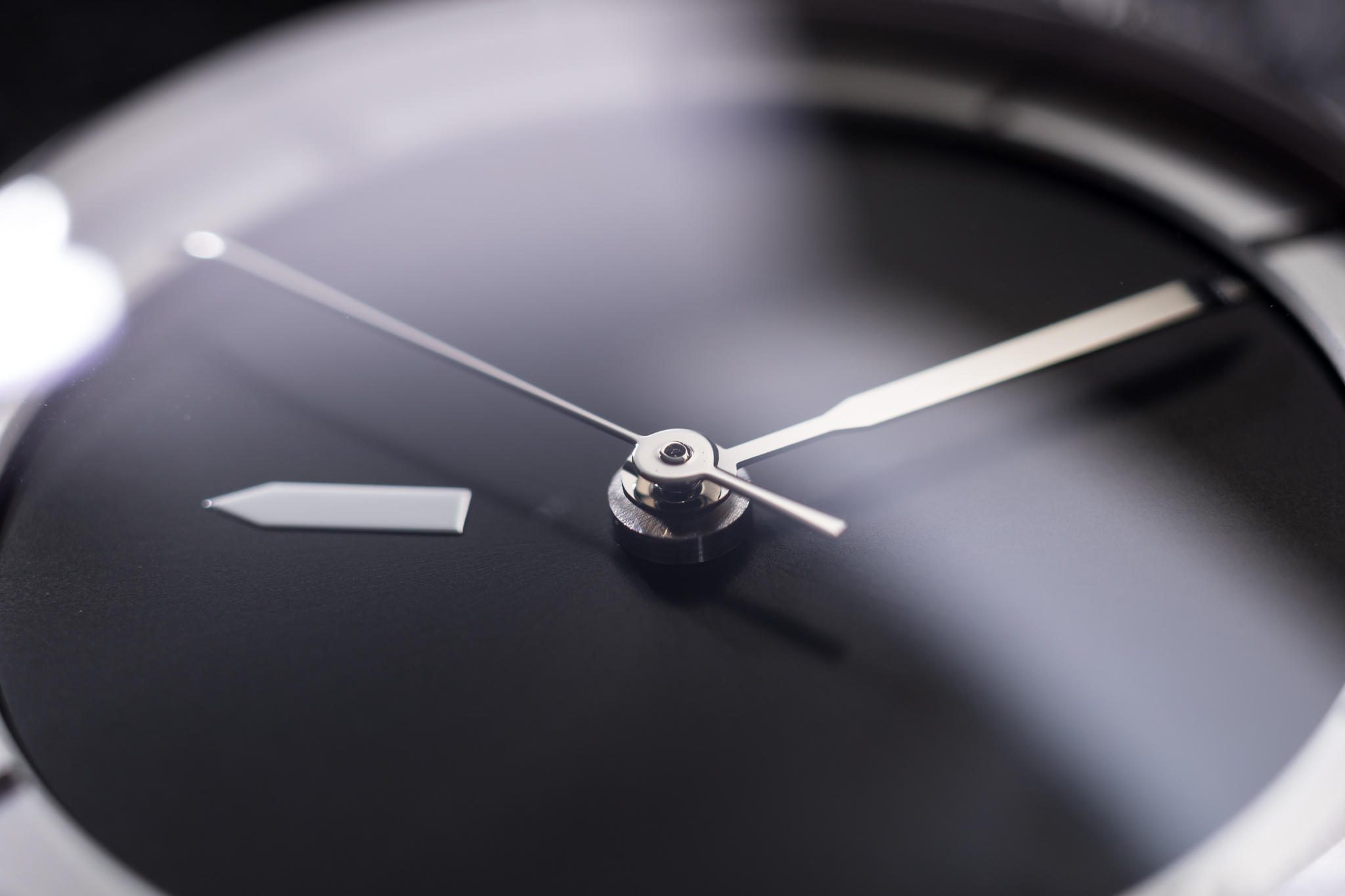 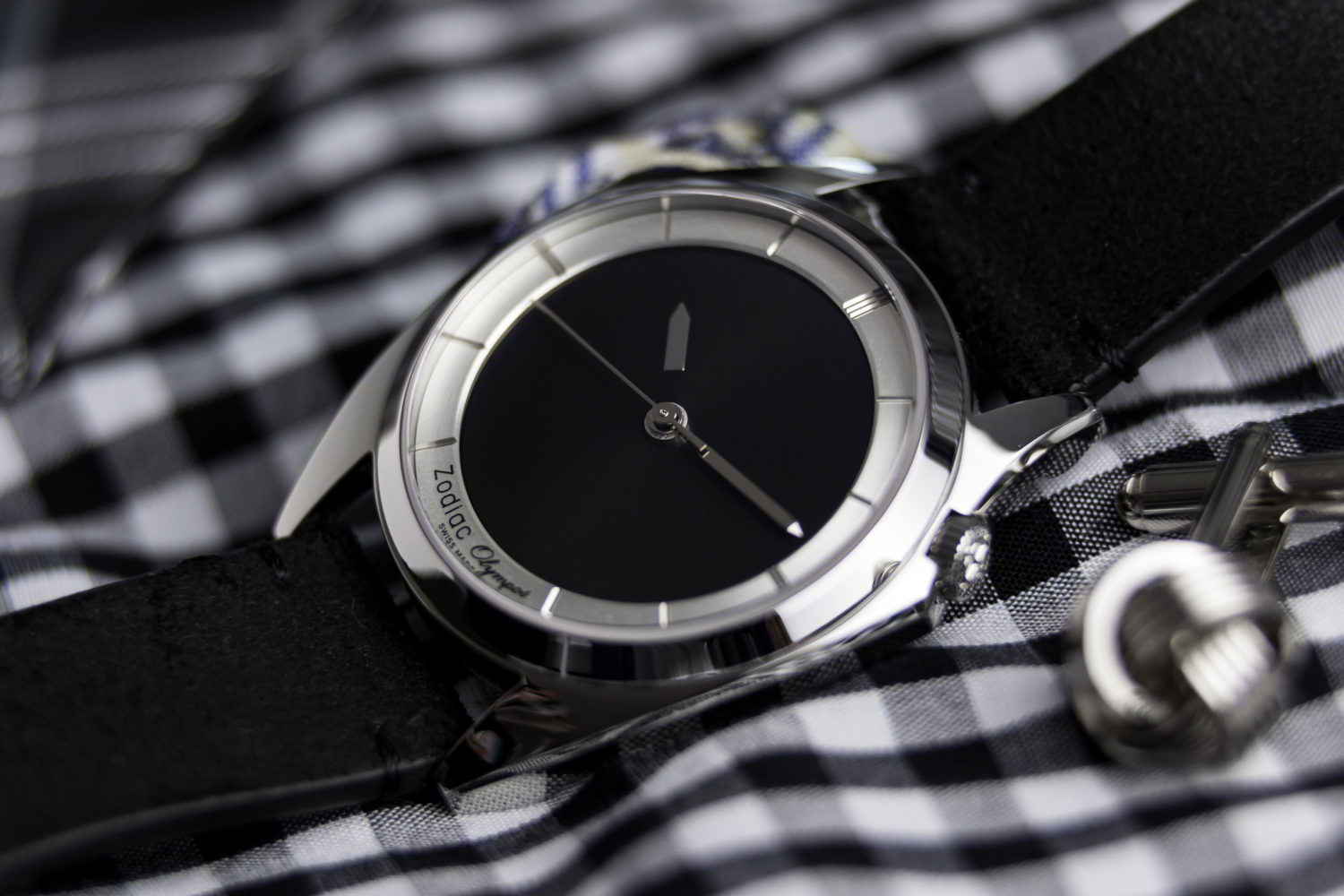 Also known as the Batman case, one could easily see the correlation to Adam West’s Batman era, what with its swooping sharp edges, polished accents, and minimalist design cues from the 1960s. Yet, I think the watch is less like the 1966 logo and original Batmobile (West mobile), and more like the 1992 Batman Returns Batmobile (Keaton mobile). And, as far as which Bruce Wayne would wear this watch, I’d have to pick Christian Bale. Let me explain.

In Batman Begins, Bruce Wayne wears a JLC Grande Reverso between crime fighting and attending an opera or billionaires soiree. While the price disparity between the JLC and the Zodiac is quite immense, much like the IQ of Batman (being almost omniscient) and a normal person, the similarities in minimalistic design, classic aesthetics, and novelty are very alike. 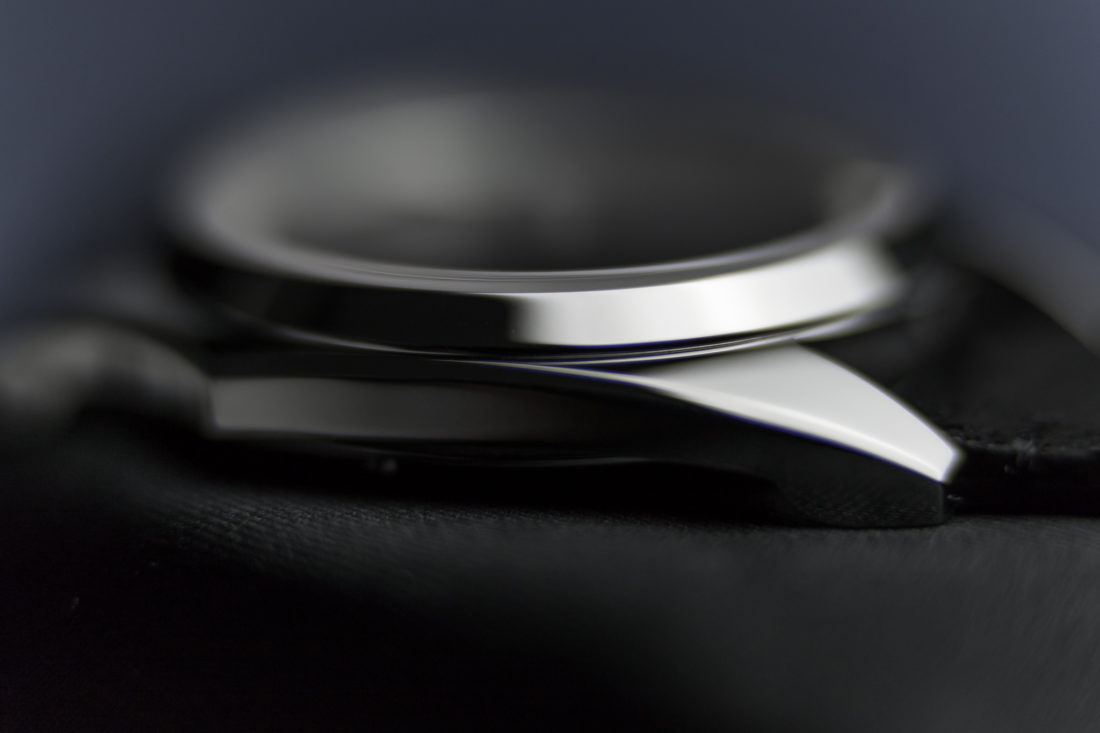 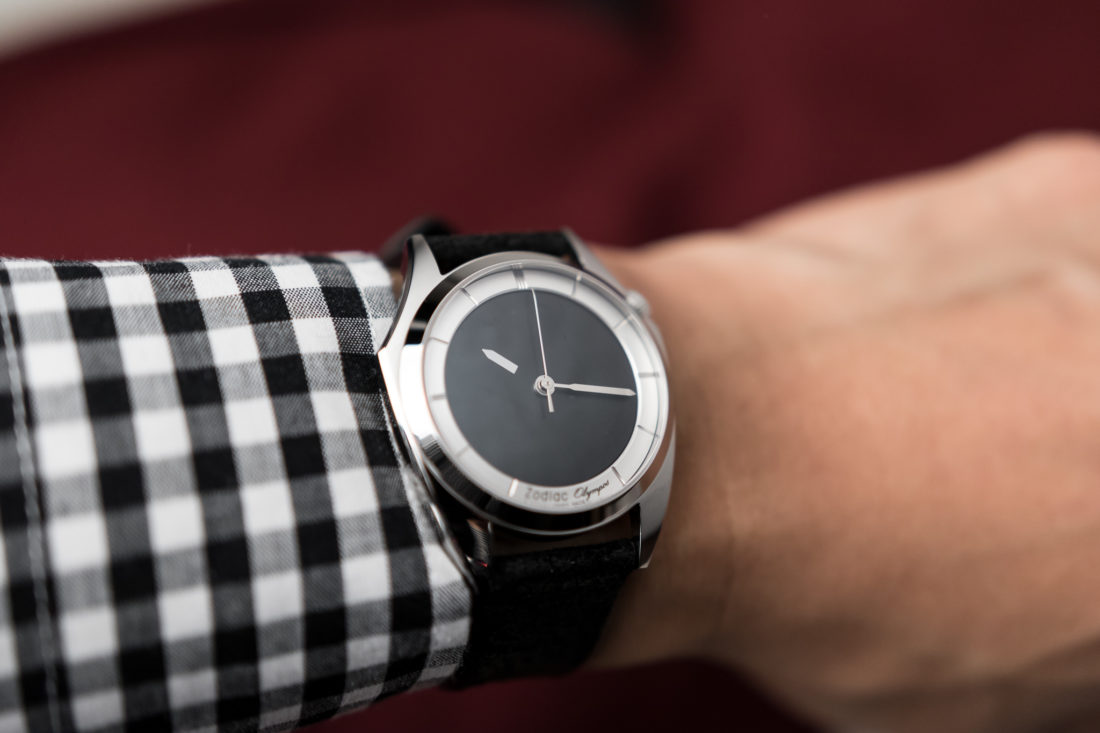 The case is multi-faceted and dances with the light at almost every angle, which seems to be the overarching theme of this watch. If the case wasn’t so heavily polished, I would think it would visually wear even larger than its dimensions suggest. The lugs continue the theme with sharp edges and clean square angles, but the underside of the lugs seems like an afterthought on where to put the spring bar holes. I’m sure the case is authentic to the original design and engineering aspects, but the rounded bottom of the lugs seems aesthetically out of place in relation to the entire watch case and the radius of the curve looks to be slightly square versus a continuous curve. 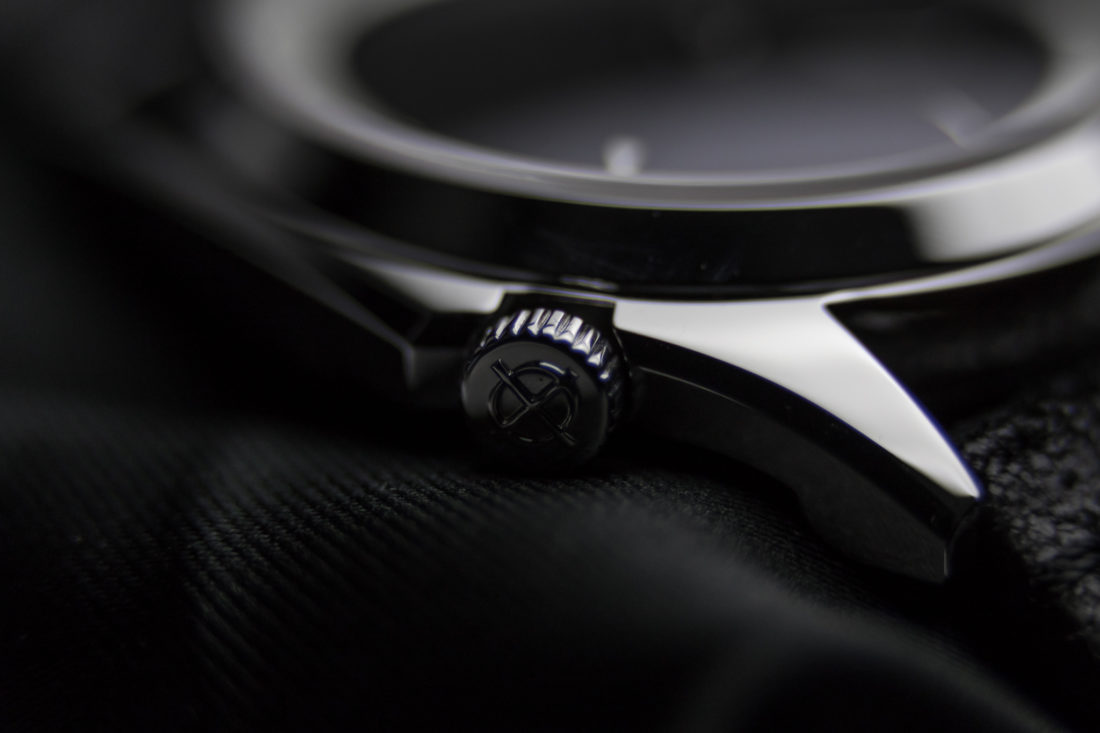 A minor complaint about the clean lines and unobtrusive design of the crown is that it’ll give you calluses on your pointer finger and thumb. It was hard to get a good grip on the deeply inset crown at 2 o’clock flanked by the haunches of the bullhead like crown guards which rest almost flush to the top of the crown. The actuation is very stiff when winding the mainspring of the watch and the rotor is a little loud and hollow sounding when rotating while worn on the wrist. Even when pulling the crown and setting the time, the gear mesh seems to be rather tight and requires more force than usual. 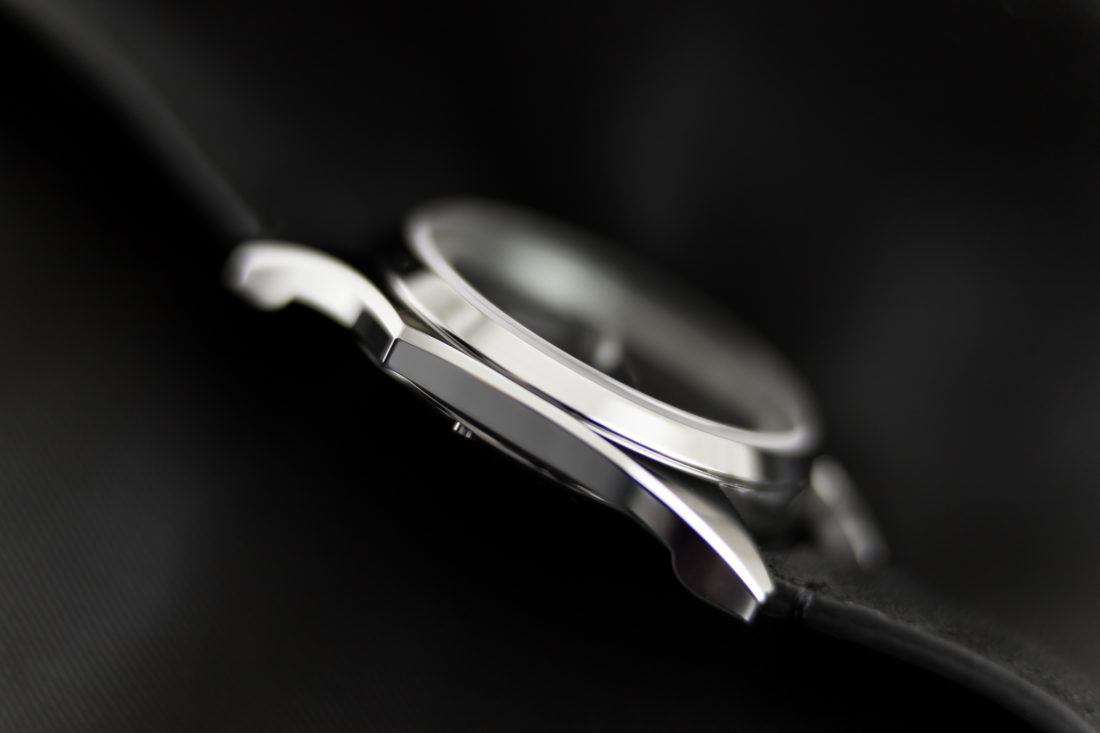 Invisible, but there is the 44 hours power reserve, 4Hz, STP 3-13 automatic movement with all things blued, perlaged, Cotes de Geneve, and a swan neck regulating system, hidden behind a solid “screwed down” case back. 6 symmetrically placed polished screws hold the case back against the body and it’s finished with a polished outer bezel and brushed center area. Engravings on the case back are both informative and cryptic at the same time. More on that later. 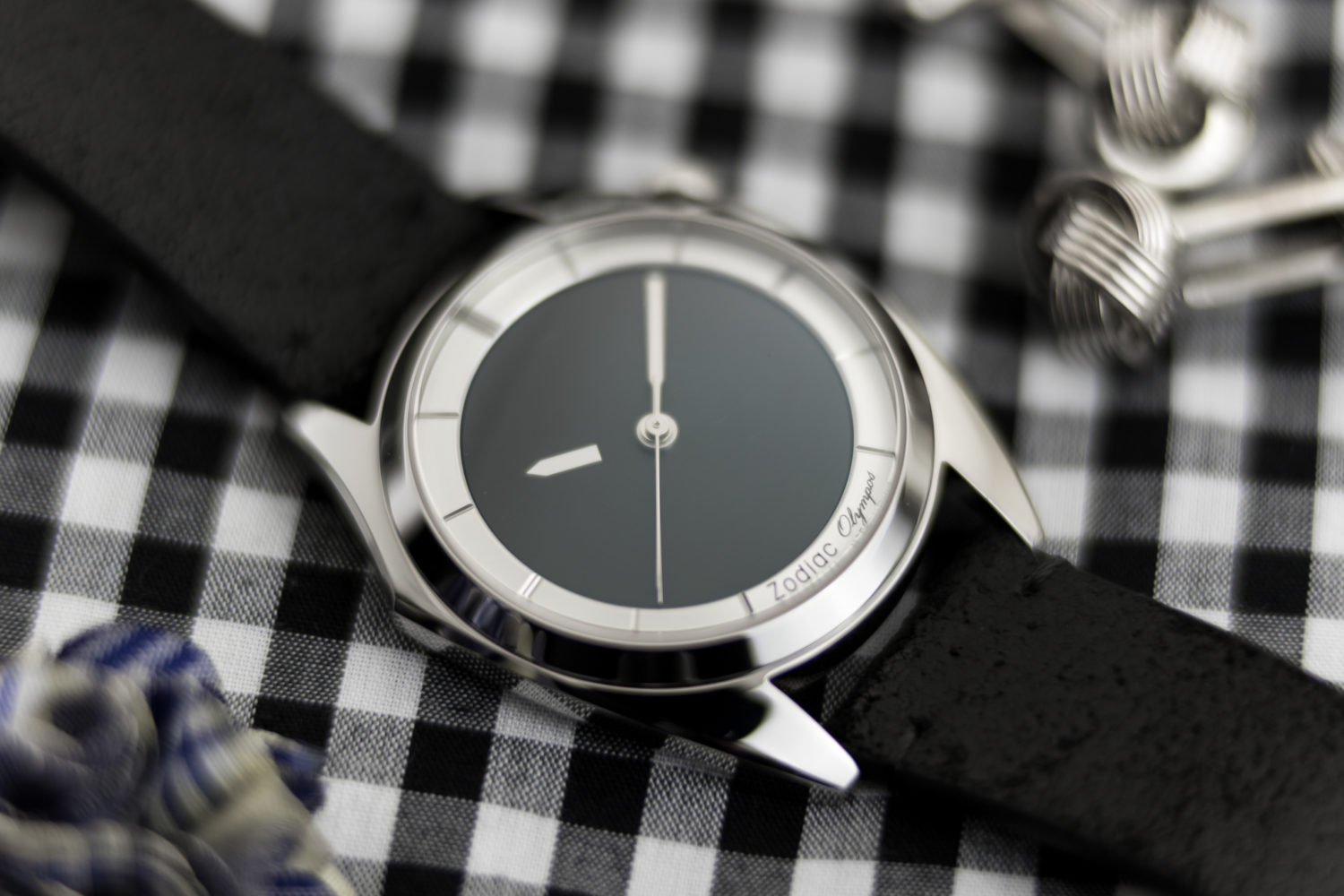 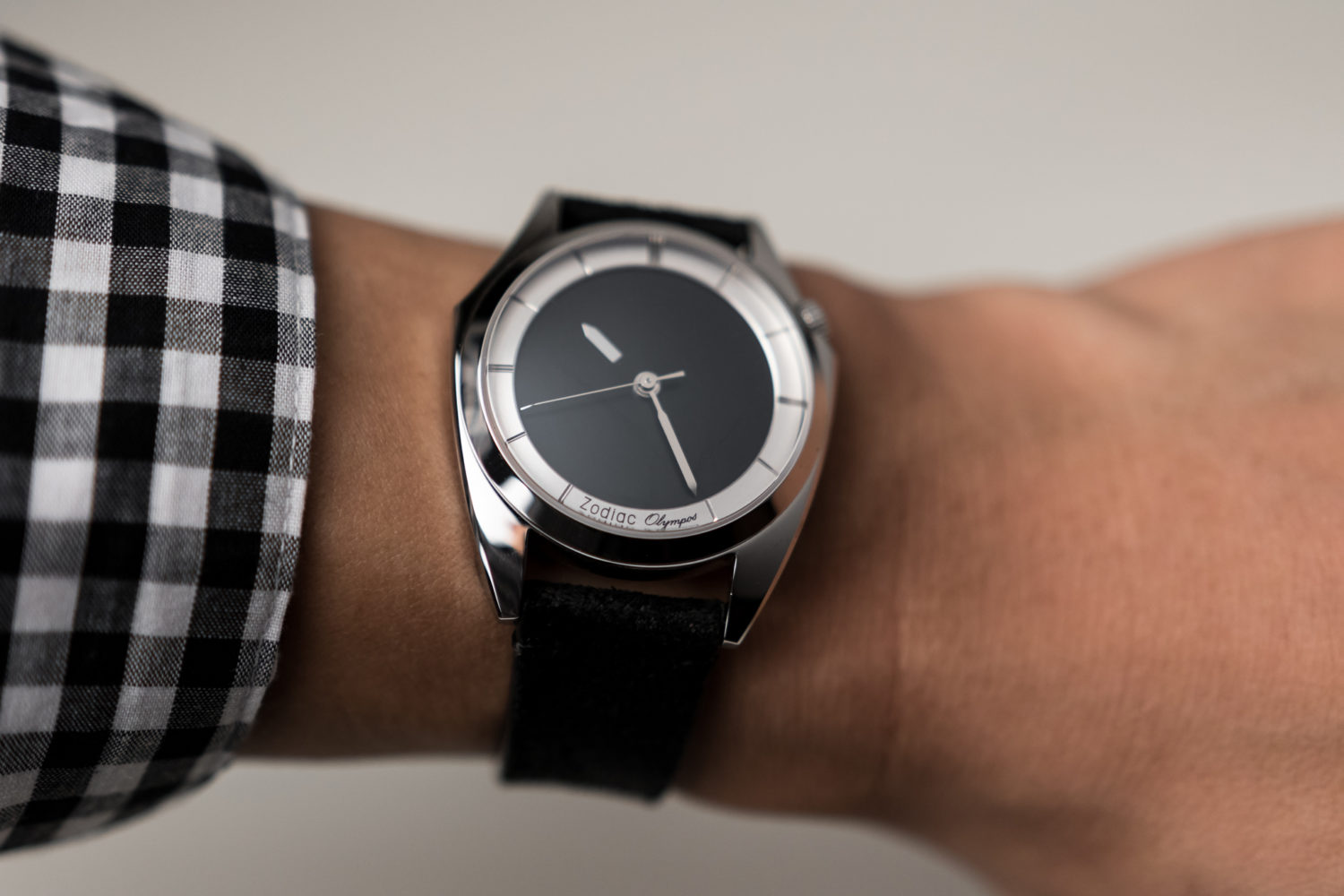 The dial is a flat black void of darkness, sucking in any reflections in its path while only reflecting the photons from its gliding silver sliver of an hour hand. The minute hand hovers over the “mystery dial” along with its secondary companion ticking away the seconds only to be attached by a rather thick and robust cannon pinion. The rather simple and legible execution is quite remarkable considering the hands are mirror finished and mostly two-dimensional. When the hands do reflect a darker color and become illegible, the cleverly bent tips of the minute and second hands add that last bit of three-dimensionality to play backup and bounce just enough light to allow reading of the time. 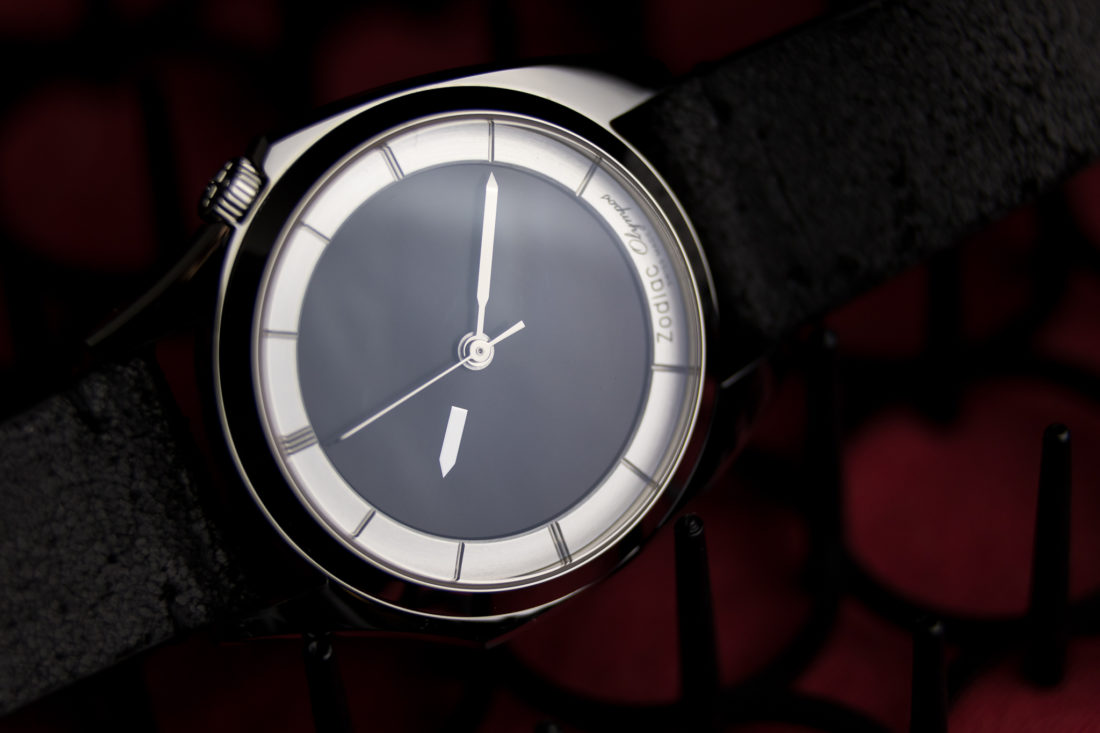 Its chapter ring floats tightly above the “static” dial face and has hash markings as follows: 3 hashes for 12 o’clock, 2 hashes for 3 & 9, and a single hash for all the other numbers, except 6 o’clock which is occupied by the Zodiac branding. Although minimal, they are highly legible and again reflect just enough light, much like the mysterious and highly secretive method of zaratsu-polish on the cases and hour indices of the cultish Grand Seiko line of watches. Even the buckle is multi-faceted and beveled but feels normal in comparison to the case. I would have liked to see a more dynamic design to the buckle that more closely mimicked the shape of the case. 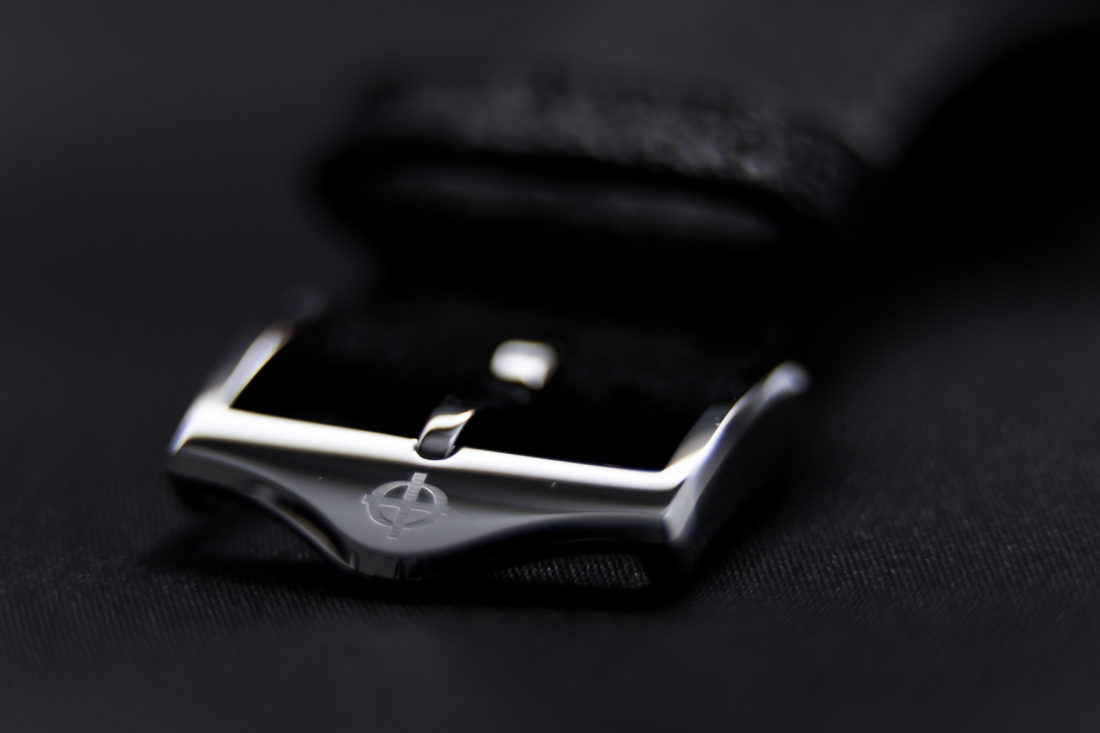 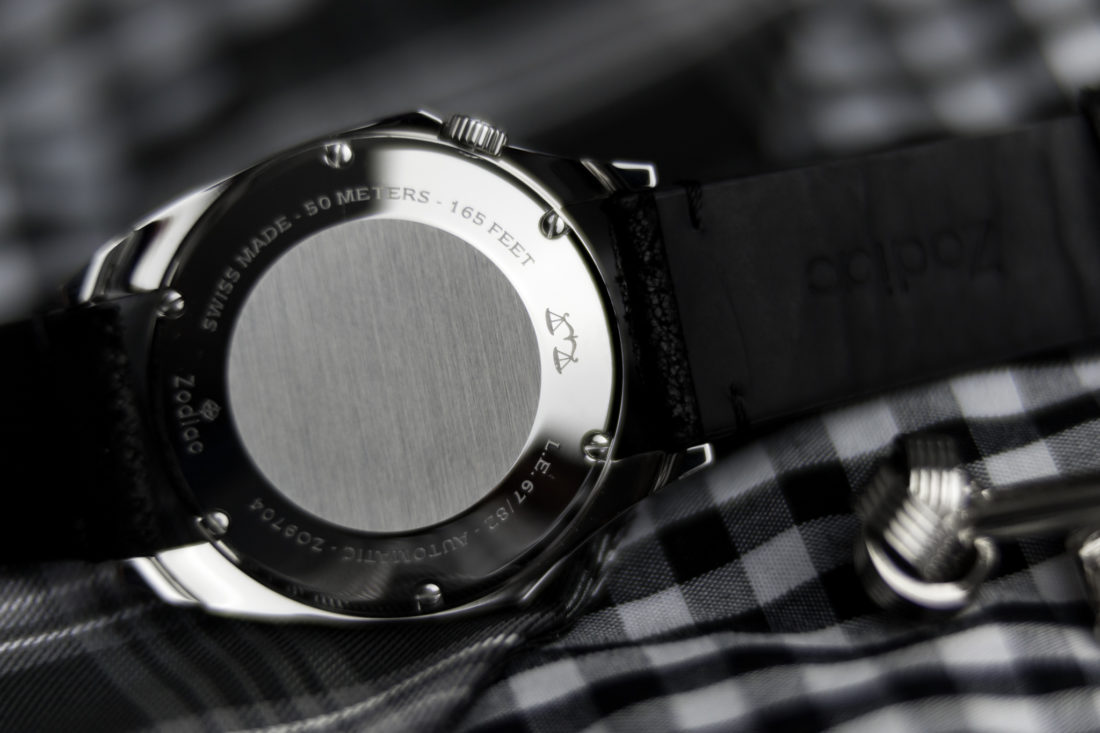 Speaking of mysterious and interesting, the case back of the Zodiac Olympos watch has an engraving for the zodiac sign of Libra at 12 o’clock, and the Zodiac watches “sun cross” logo at 6 o’clock. There may be no correlation to all of this, but here’s my best postulation. The Libra symbol, also known to mean balance or scale, is for the Greek goddess Themis and Greek gods lived on Mount Olympos, which just so happens to be the name of the Zodiac watch collection. Themis was the goddess of Justice. Bruce Wayne, the Dark Knight of justice, also happens to be part of the Justice League. Therefore, all signs point to this being Bruce Wayne’s watch. 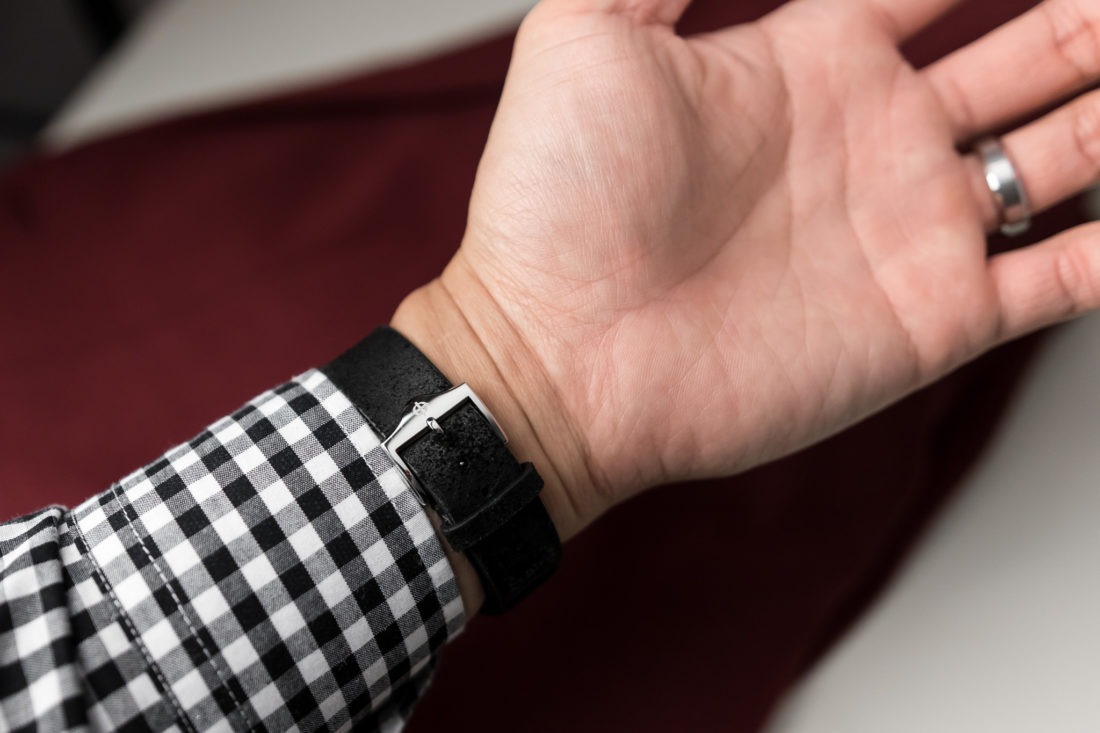 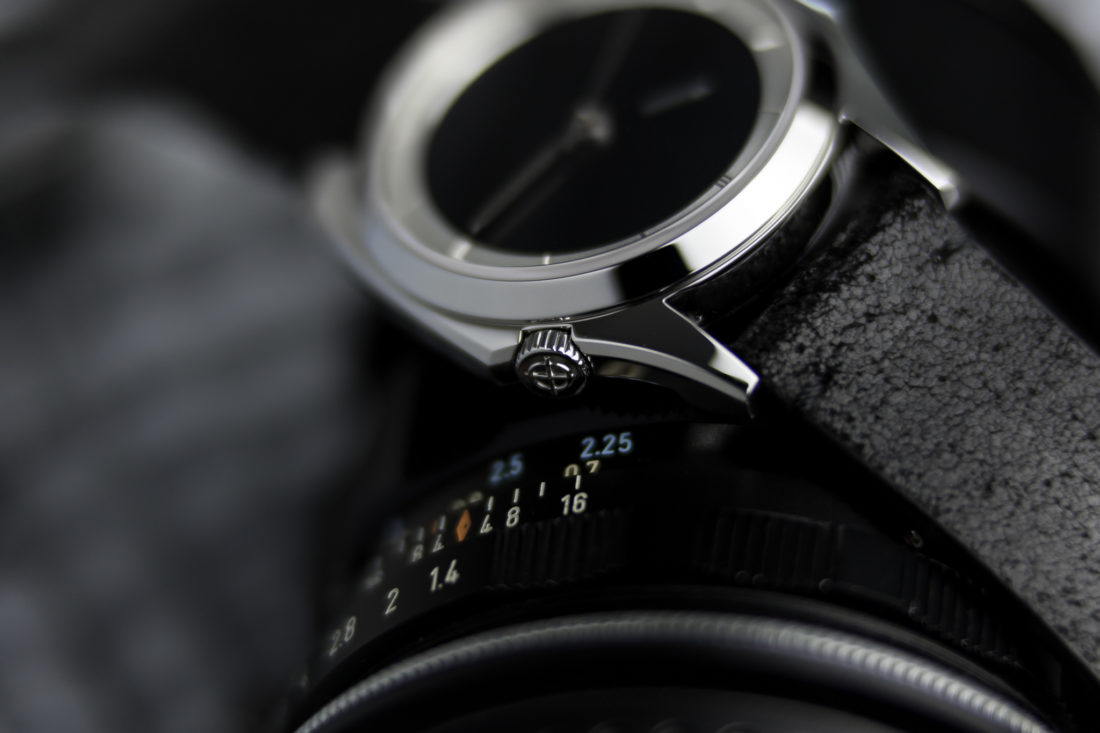 Meant to be worn with casual attire under light skies or paired with formal wear through dark nights, the Limited Edition Zodiac Olympos Mystery Dial is clearly dressed to impress with its tuxedo like monochromatic high contrast color scheme, “mystery dial,” and classic sharp lines. Unfortunately, this $995 limited edition piece is sold out at the time of this review. To keep abreast of future limited editions and to see the current Zodiac Olympos collection, head on over to zodiacwatches.com.

Necessary Data:
>Brand: Zodiac
>Model: Limited Edition Olympos Mystery Dial
>Price: $995.00
>Size: 37.7mm x 45mm
>When reviewer would personally wear it: When I feel like Bruce Wayne. Seriously though, I’d actually wear it as a daily, if my your work or everyday attire floated from business casual to semi-casual. I’d definitely wear it with a suit as it slides right under virtually any sized cuff.
>Friend we’d recommend it to first: Someone who dresses and acts like (Morgan Freeman) Lucius Fox . Hip and trendy business professionals looking for a visually different and eye-catching daily watch, but also to a no-frills, get-it-done type of friend who needs a timeless piece of kit that won’t go out of fashion.
>Best characteristic of watch: Case design and size, including the domed sapphire glass. Chapter ring comes in second.
>Worst characteristic of watch: Wish it was more mysterious. Although the dial is aesthetically pleasing, I wish all the hands were “mysterious.” Possibly the next iteration will have a flat black dial and 3 floating hands on glass discs?