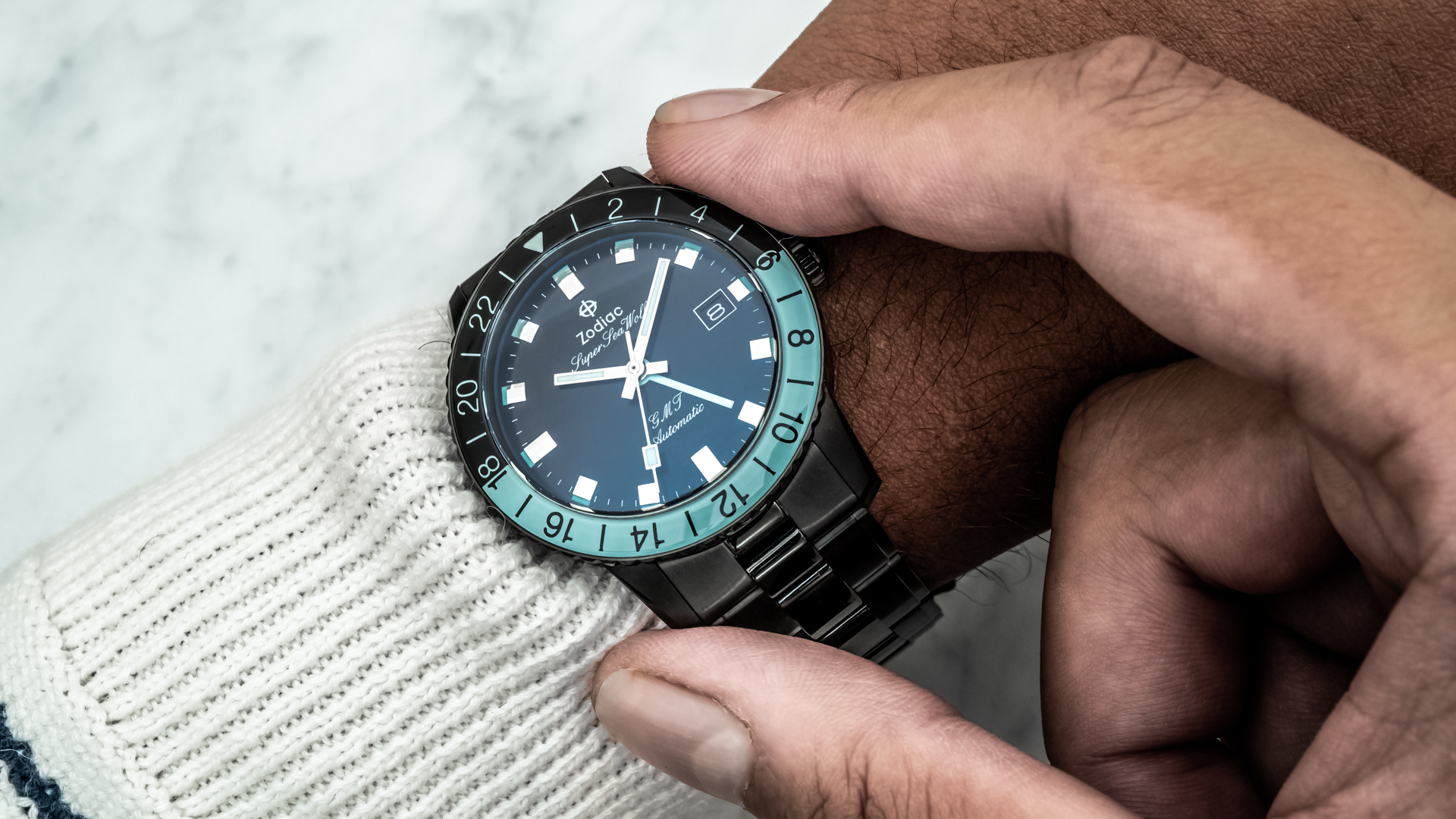 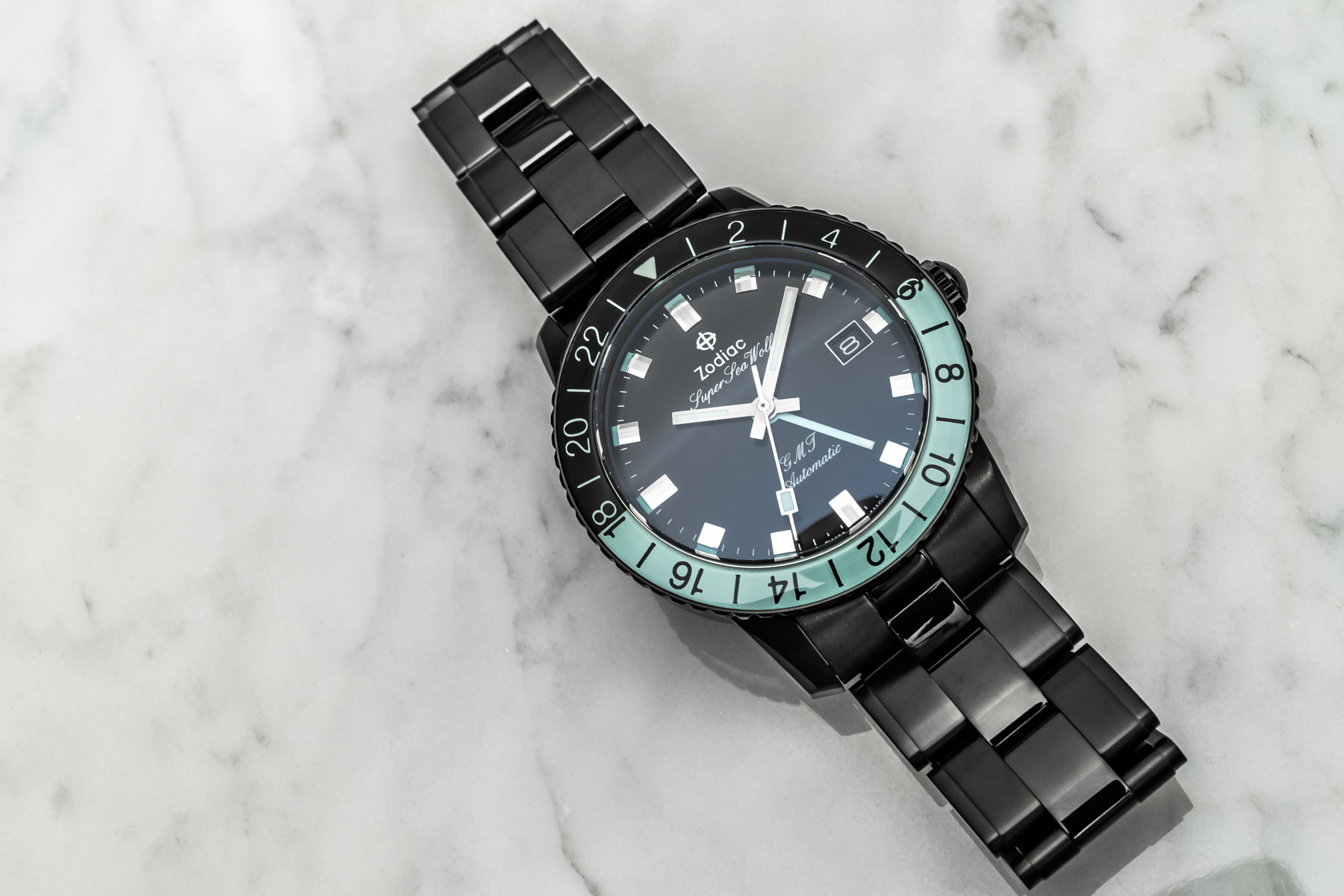 Zodiac’s Super Sea Wolf GMT Limited Editions have been enthusiast darlings with a supply and demand ratio akin to a seesaw with an elephant on one end a child on the other. However, just released is this Zodiac Super Sea Wolf GMT “Blackout” Edition done with Timeless Luxury Watches in Texas. Yes, it is limited to 82 pieces, which I actually think is the smallest batch of these GMTs so far. Done in a black DLC case and bracelet, this dark and, for lack of a better word, aggressively styled Super Sea Wolf GMT is mellowed by light blue accents on the bezel and dial. 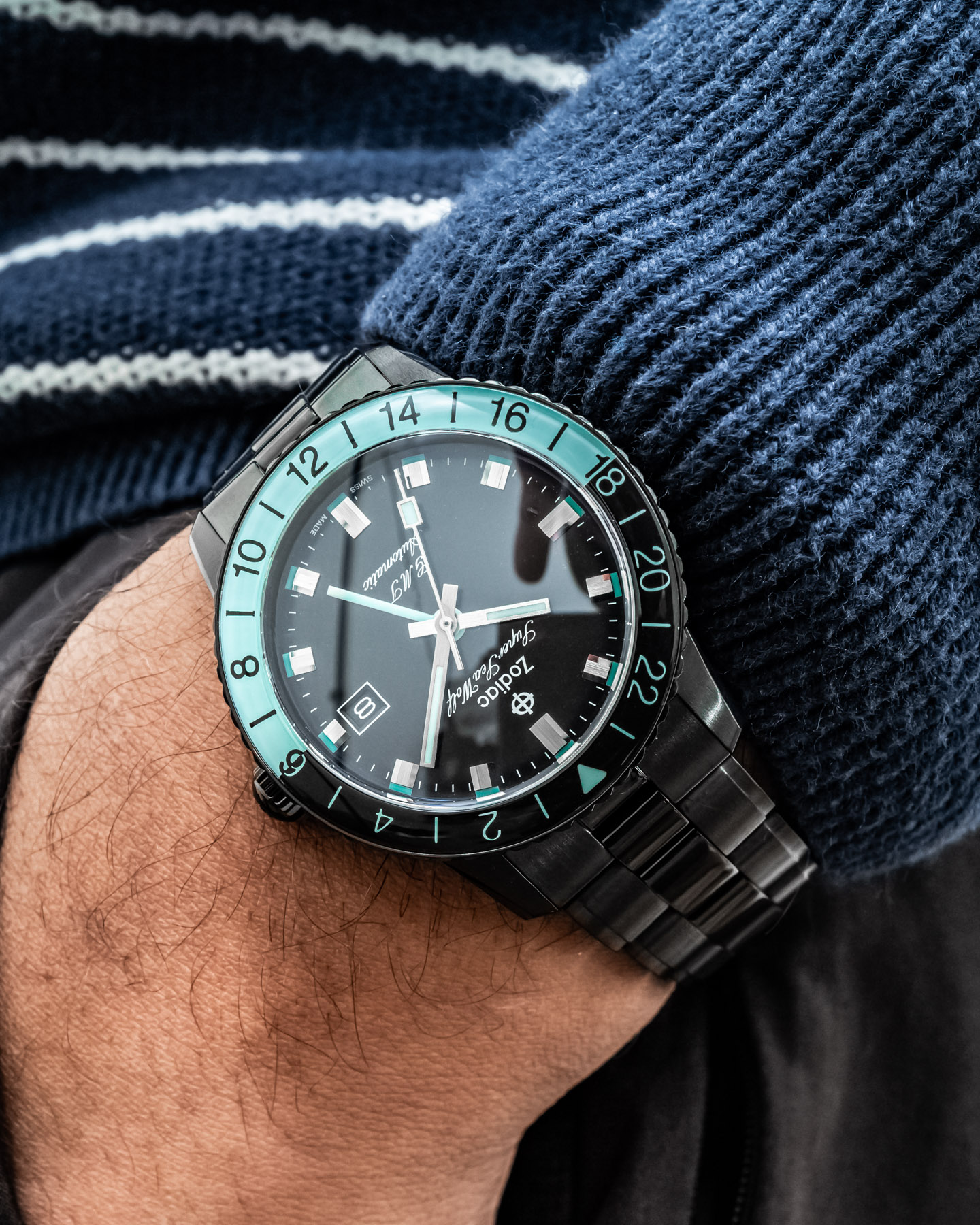 This is actually the first time Zodiac has used DLC coating (previously having only used PVD), and both the case and bracelet are finished with it. That’s a dark watch for sure, but the light blue (baby blue?) used on the bezel, indices, and hands is calmingly radiant in a way that cuts through the darkness so effectively. Dan Broadfoot from Timeless Luxury says, “This watch was inspired by night diving. When I think about diving at night, it gives me chills. I wanted black and a light blue colorway, so the blue against the black would almost appear glowing — it’s alluring.” For me, this “Blackout” GMT is a much better realization of a blacked-out Zodiac when compared to, say, the Super Sea Wolf 53 Black Z09276 (though that one does begin to show just how much a little bit of light blue can really shine on a black background).

While I’m not 100% certain, the blue used here looks a bit different than that used on the first batch when these were still called the Aerospace GMT. The model I’m referring to had the blue and orange bezel, which were meant to represent the sun and water. 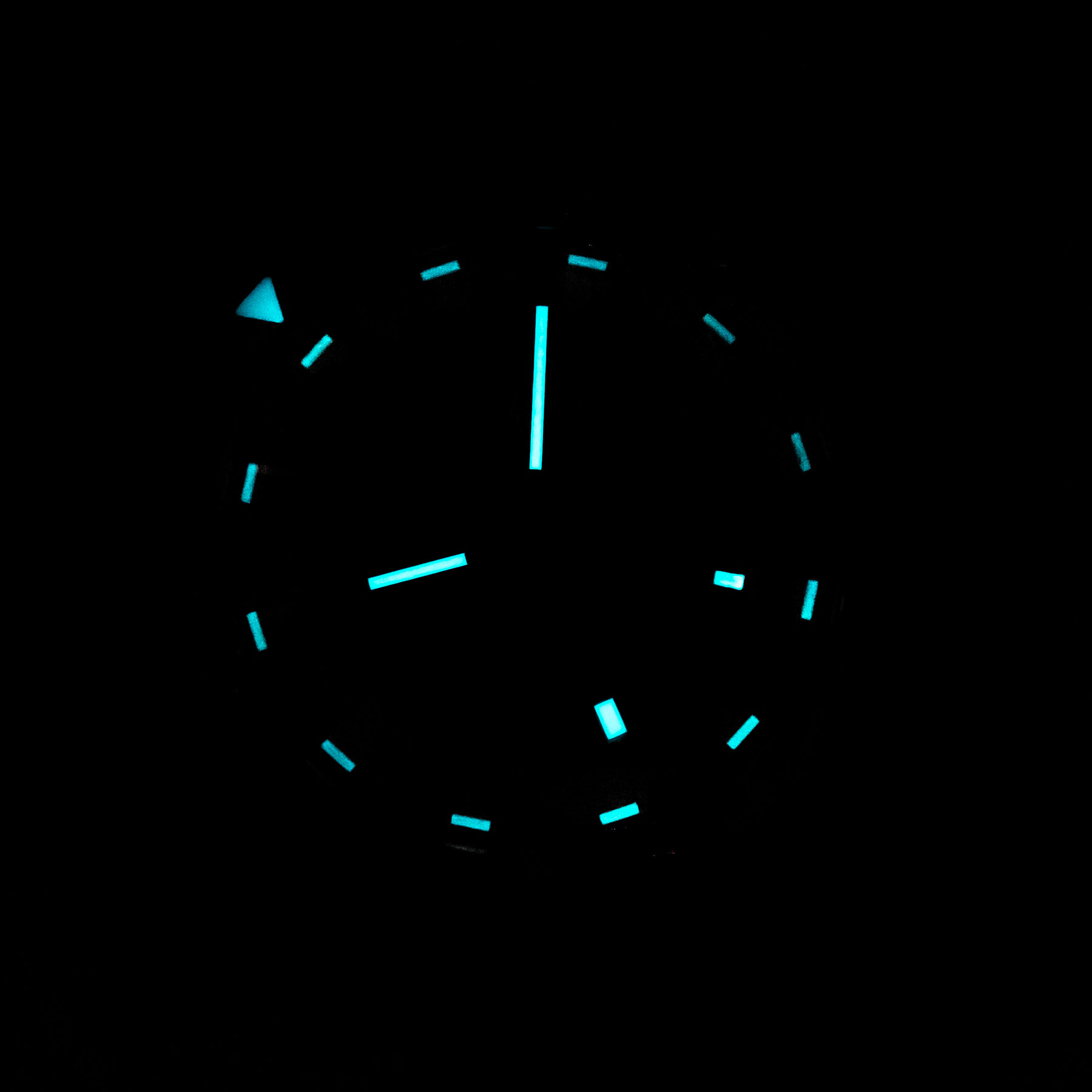 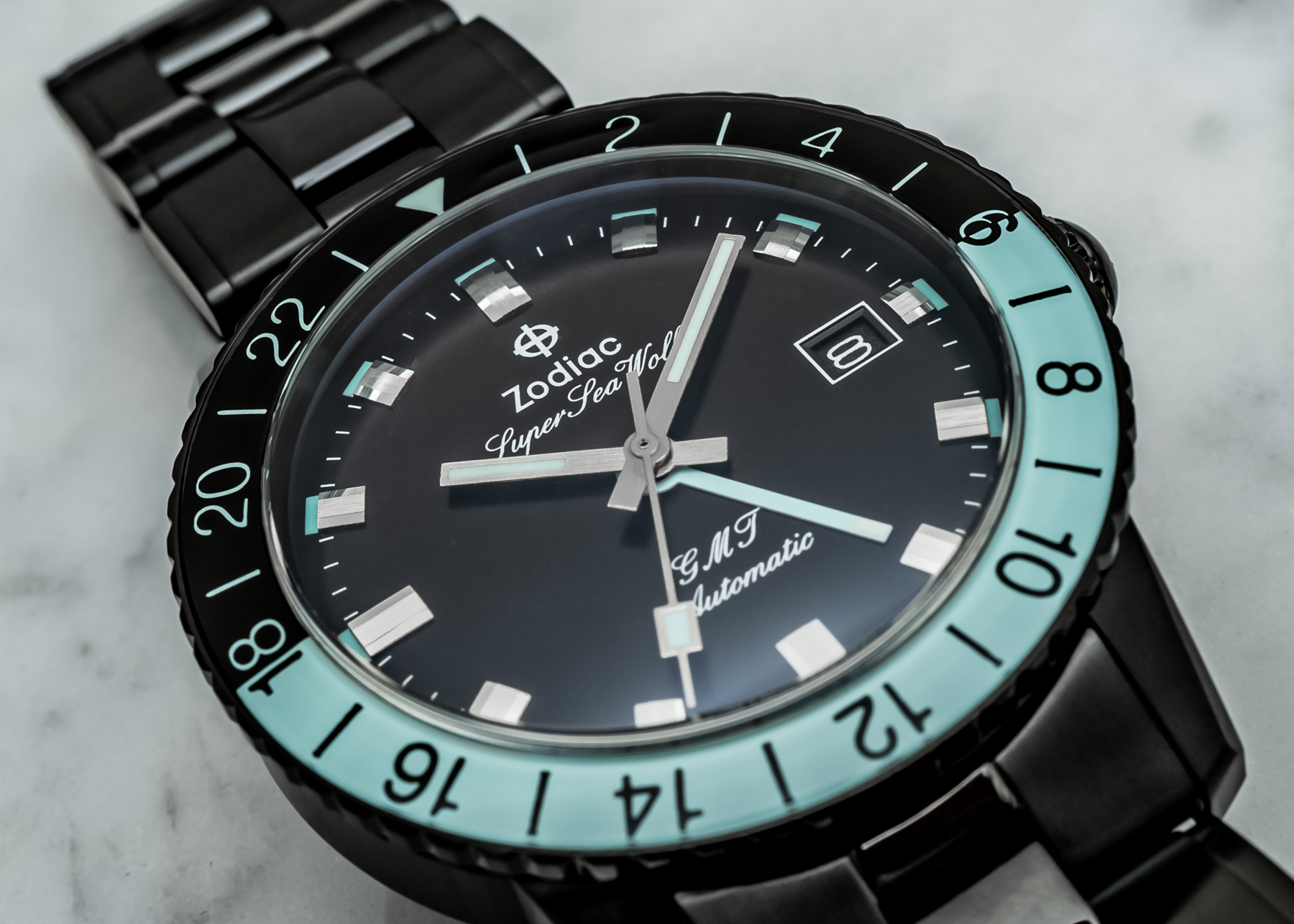 Other than the new color scheme, you’ve got the same basic dial and layout as the previous iterations of the Super Sea Wolf GMT. The rectangular hour and minute hands, the blocky seconds hand, and matching blue GMT hand are all lumed, as well. The eye really is drawn to the blue on both the dial as well as that classic bidirectional bezel. While the dial uses a sapphire crystal, there is mineral glass done over the bezel. 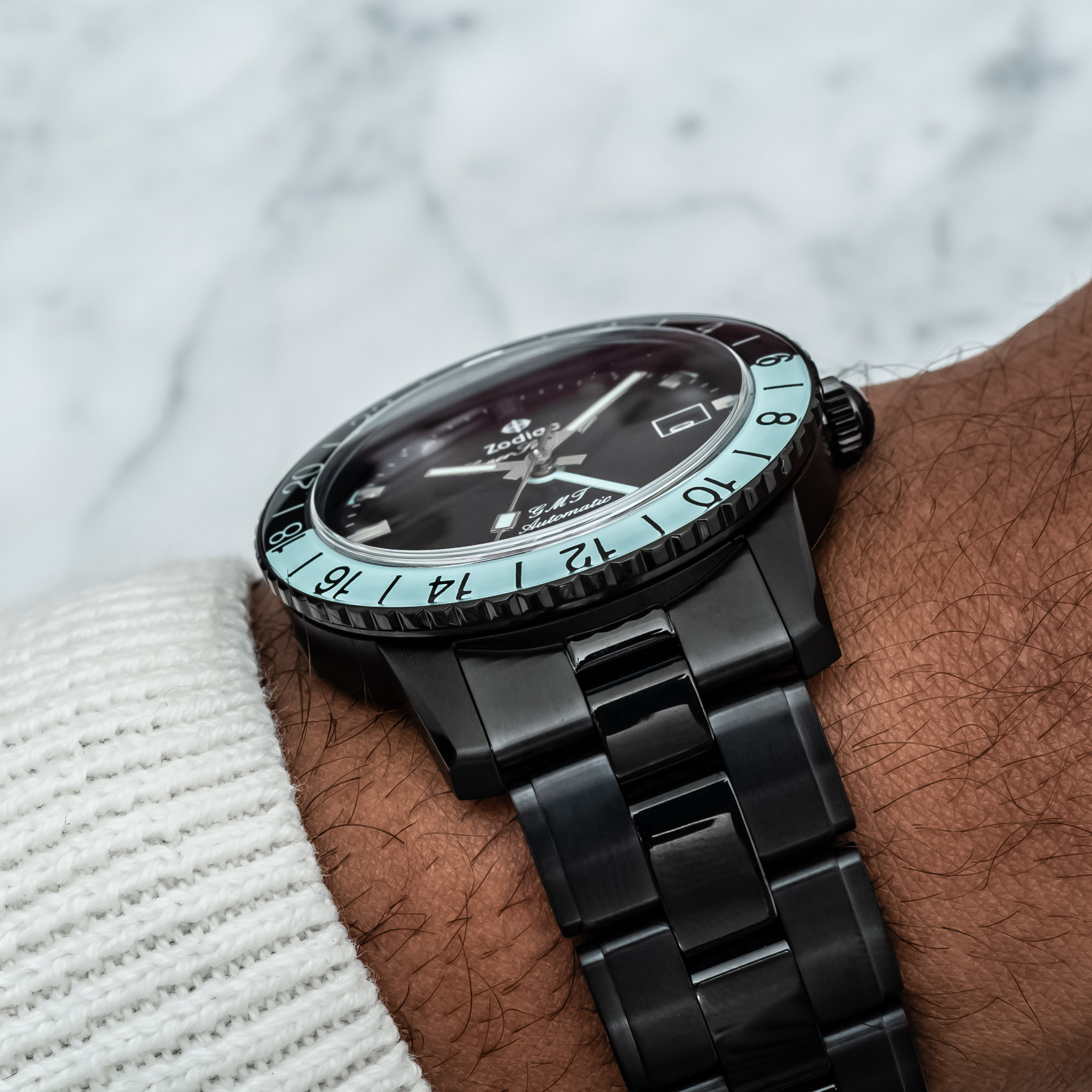 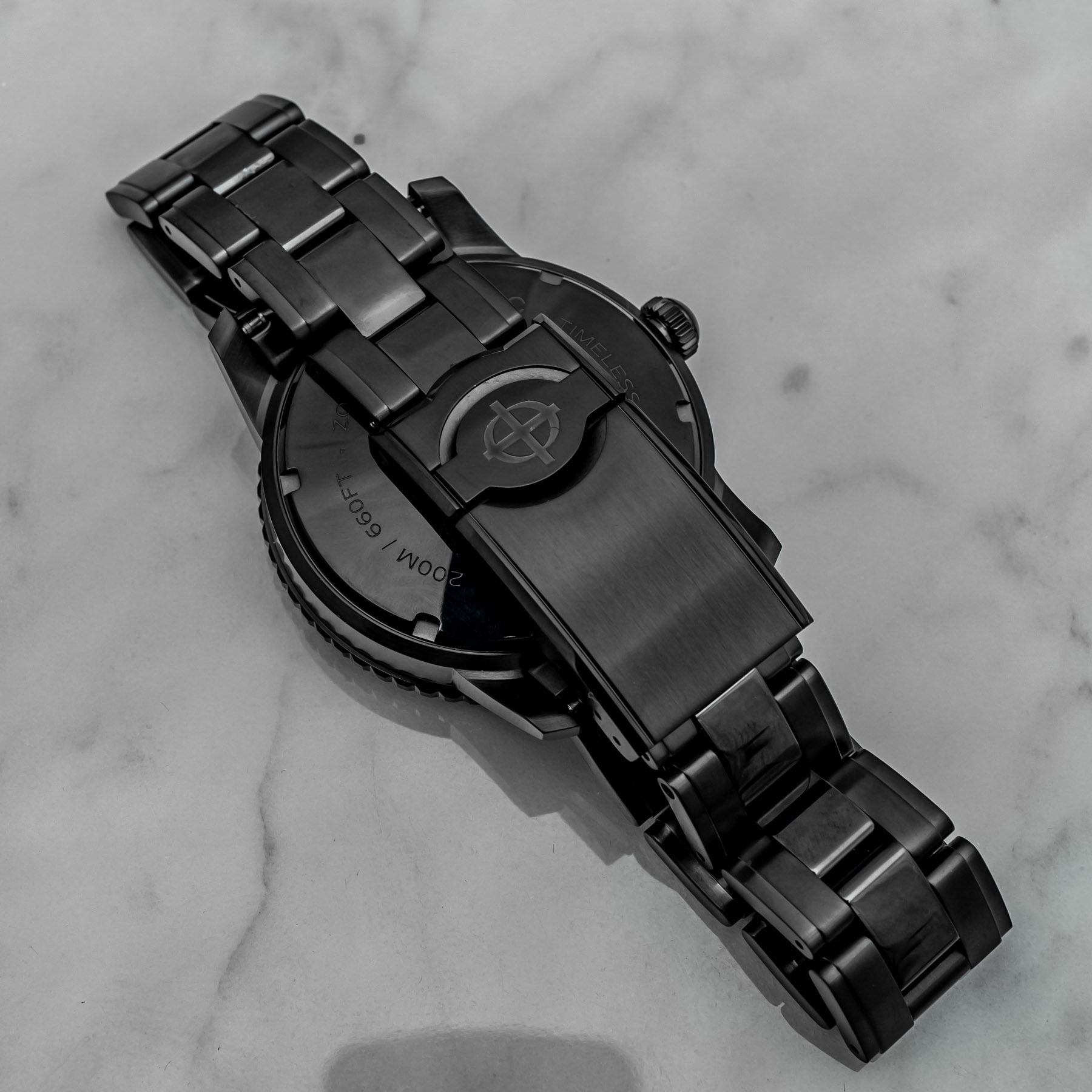 With 200M of water resistance, the case measures 40mm-wide, 14mm-thick, and has a lug-to-lug height of 48mm. The use of all black DLC on the case and bracelet is a bold move, but I do think it makes the blue pop in a really appealing way. The bracelet still hits the same nice touches as the simple steel version with a glossy polished center link and nice stepped edges on the outer links. It’s solid feeling and quite nicely finished, which is high praise coming from someone who has never particularly been a fan of blacked out bracelets. Note that the version I shot is a prototype. 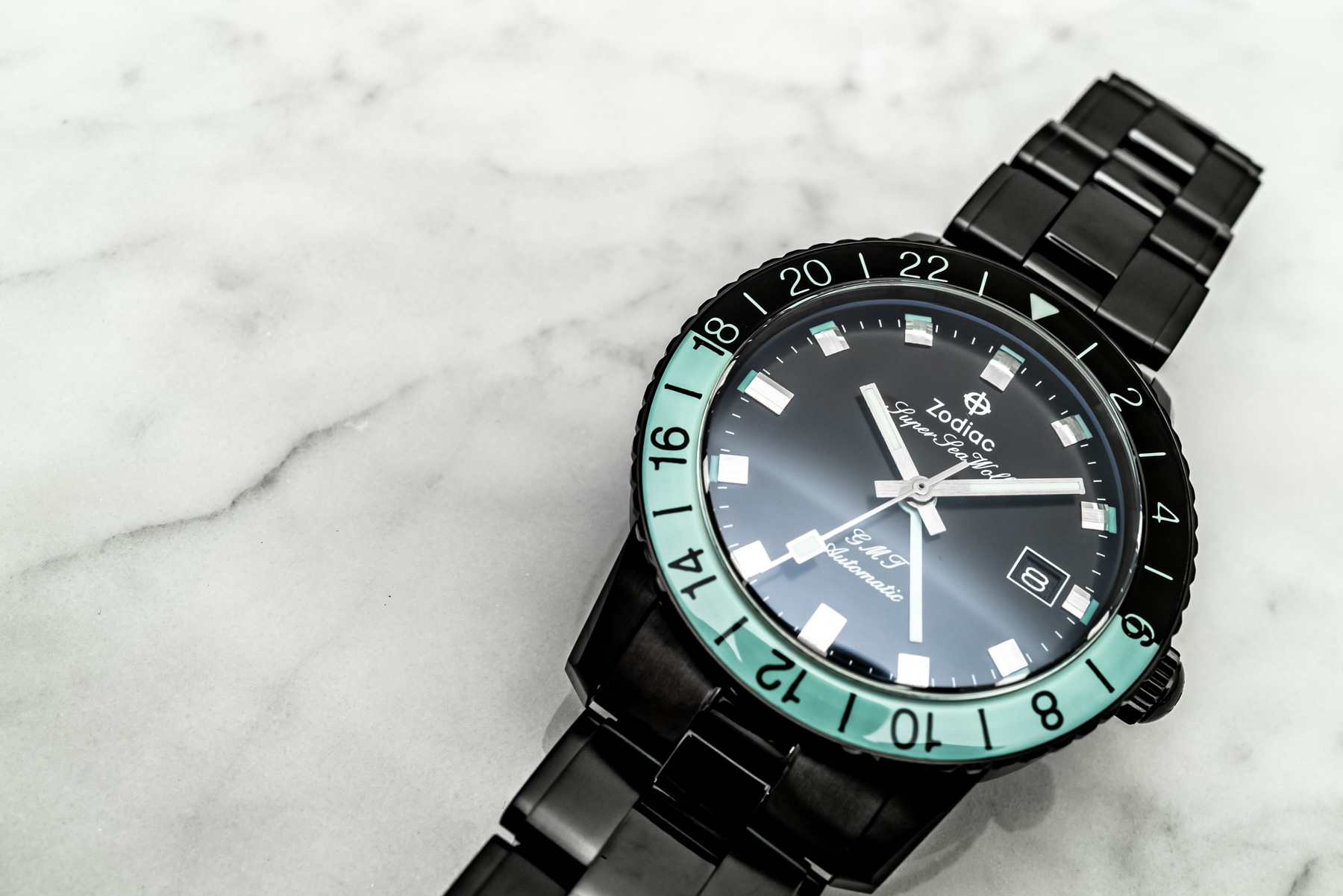 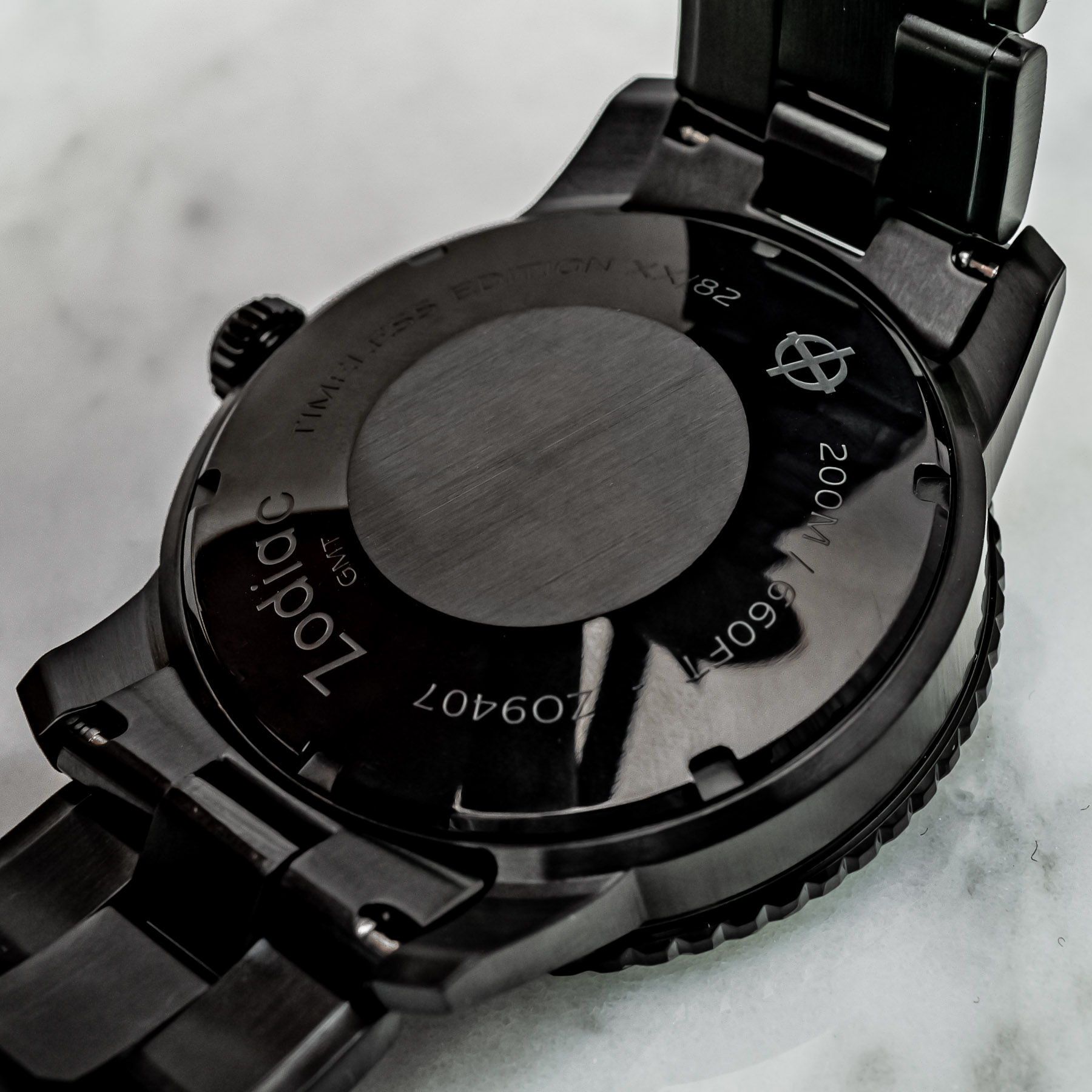 The Super Sea Wolf GMT “Blackout” uses the ETA 2893-2 automatic movement, which is quite difficult for non-Swatch group brands to source. This helps explain just why the production numbers are so limited for these Zodiac GMTs. While the appeal of immediate sellouts and hype is nice, demand for ETA GMT movements keeps production numbers limited. The movement itself is a reliable staple that operates at 28,800 vph with a 38-hour power reserve. 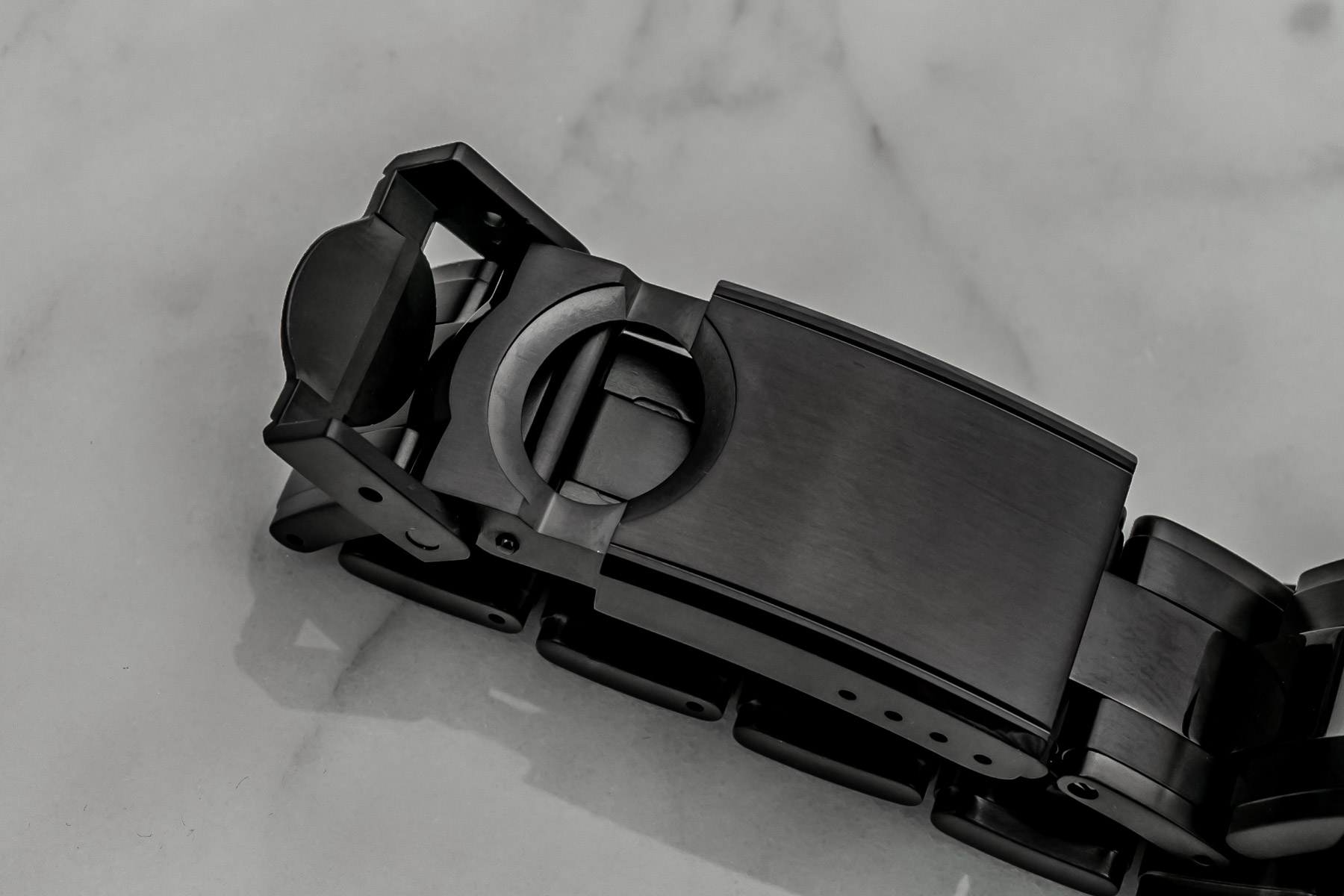 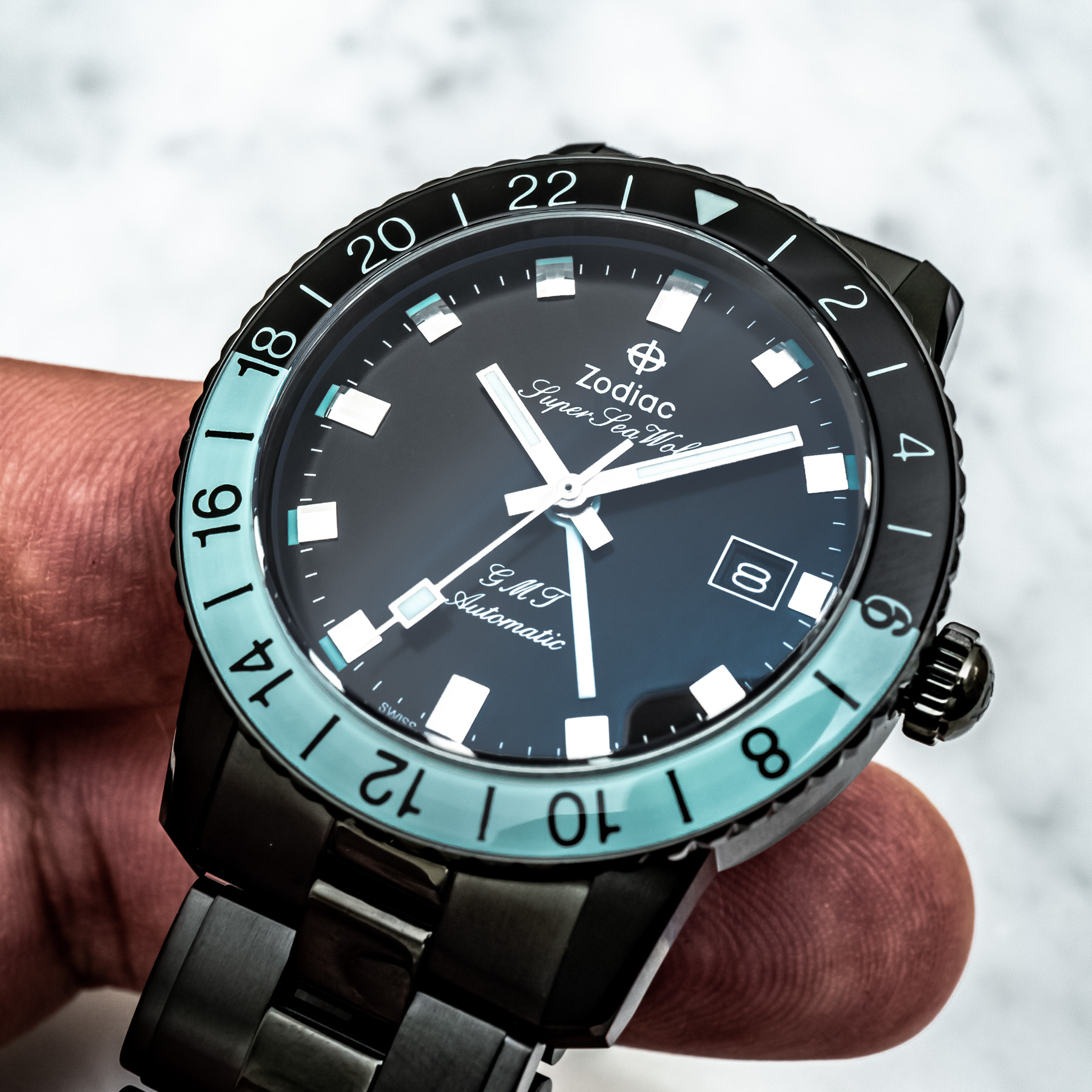 This is the first collaboration between Timeless Luxury and Zodiac, but they’ve got a long track record of some pretty attractive pieces. The last one I got my hands on was this Grand Seiko SBGE249 GMT with the “Blizzard” dial. While the shades of blue change, I do know that the color is a bit of a hallmark of Timeless. Personally, I would love to see this light blue shade used more.

The Zodiac Super Sea Wolf GMT “Blackout” is limited to 82 pieces and comes with both the bracelet seen in this article as well as black Tropic style rubber strap. As far as I know, this is the only Zodiac GMT that is actually available to buy (at least at the time of publishing) and is priced at $1,895 USD. You can see and shop it here at timelessluxwatches.com.