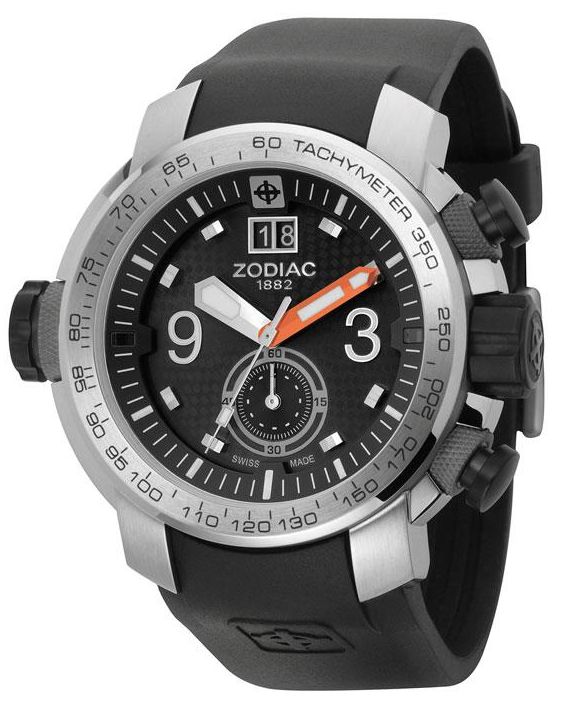 It is easy to see how this watch came into existence. Zodiac is part of the uber-mediocre Fossil watch company. Think of a committee sitting around together. Maybe only one or two of them knows anything about the technical side of watch making. The rest are product designers, hipsters, and marketing people who like to gauge market trends. Someone blandly comments, “Zodiac has a deep history with diving, let’s create something bold, that fits in the existing product line.” The non-technical designers go to work, basically ignoring most of the functional elements, and only focusing on pure form, or what their teachers awarded them on in product design school. They take into consideration the memo that big watches are in, they look at other diving watches, and have some idea of the materials they can work with. Oh, and watches tend to look more ‘legitimate’ when there are lots of instrumental looking hash marks on the dial. Who knows what odd impractical thing they came up with initially?

Then the people in production come in. Perhaps a few engineers, and figure out how to make it all work. “This is too expensive, this makes no sense, and why is there a chronograph that only counts sixty seconds?” And it just goes on like that. In another meeting the compromises are made because the design people can’t fit in the dials for a full chronograph, and the marketing people needed a chronograph, you keep in the seconds counter, and have… a 60 second stopwatch. Really useful right? No, its not. Which sort of makes me understand the placement of the tachymeter (to measure speed) on the bezel, but that has next-to-no functional placement on a diver’s watch. Usually this is where you place a rotating diver’s bezel, which is absent here. The chronograph pushers are screwed in, which is cool, but the water resistance is curiously only 100m. So the point here is that while this resembles a diver watch, and has “diver” in the name, it is not a diver’s watch in any functional way.

A cool part of this watch is the LED light which can be turned on and off via the crown on the left side of the case. Switching this on lights up the face for really easy night reading. See the recessed area between the dial and the chapter ring? This is the hole for light to flow through when the light is turned on, illuminating the face. This is a nice little feature, just don’t use it too often to preserve the battery life.

There is also the big date function, which looks nice, and the subsidiary seconds dial, which is also ‘OK.’ The watch epitomizes acceptable boldness, standard eccentricity, and mediocre excitement. The best part is likely the hands. So those are pretty well done, but then again they look like Japanese cartoon swords stuck in a watch face. Inside the Zodiac ZMX 03 is a Ronda Startech quartz movement, and the 50mm sized case is massive with 28mm wide lugs. A sapphire crystal face helps to give this watch some justification for its price, but not much. Retail is $695, but don’t spend a penny over $450.