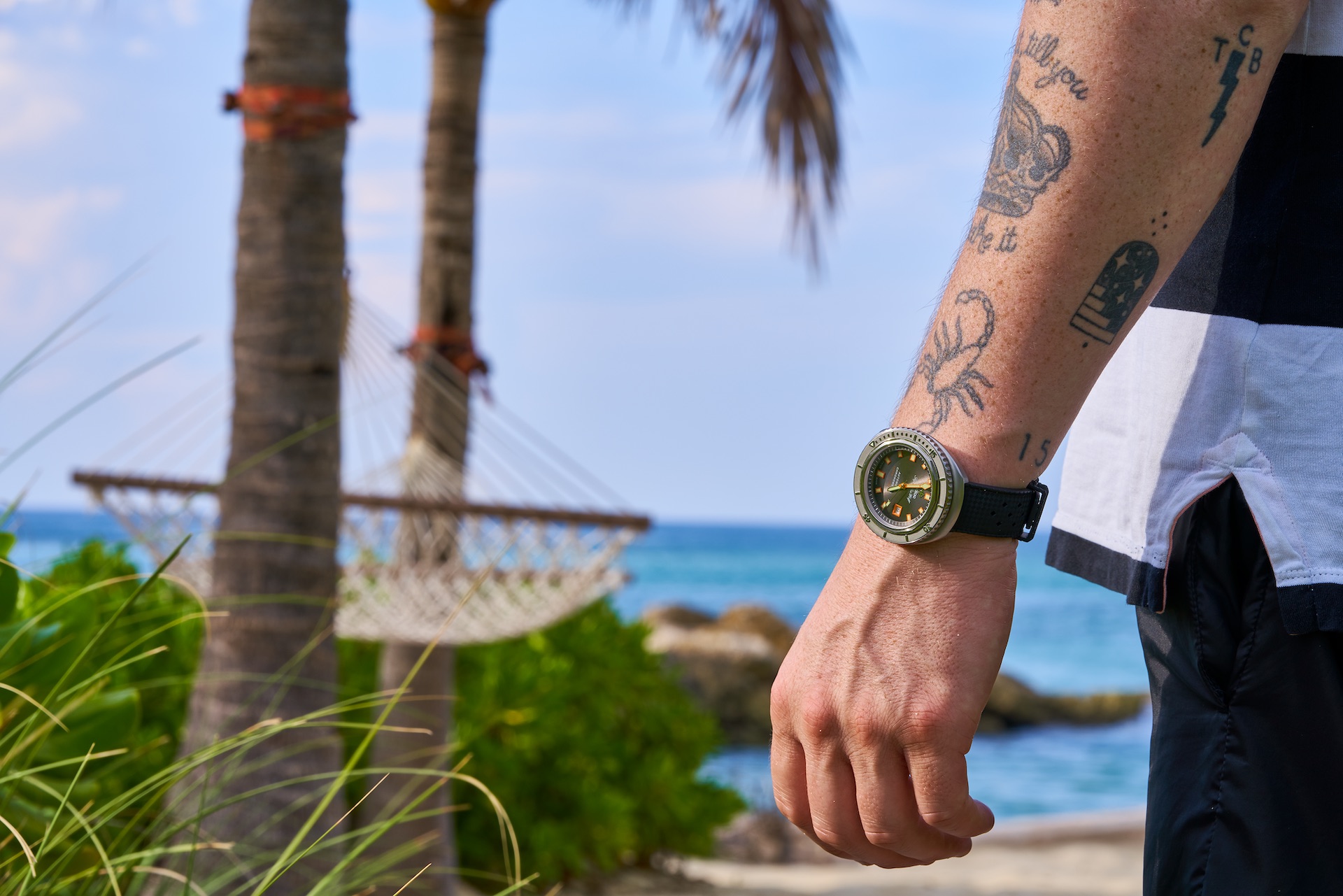 WATCH WINNER REVIEW: 48 Hours Of Adventure In The Bahamas With Zodiac Watches

In December of 2018, the monthly giveaway watch on aBlogtoWatch was a Zodiac Sea Wolf watch. The winner was Taylor Welden from Austin, Texas, USA, and after enjoying his new Zodiac Super Sea Wolf 68 Limited Edition 50th Anniversary (retail price $1,995), he has given a watch winner review for us to share with you, the aBlogtoWatch audience. Thanks to Taylor and all the other watch winners who share their experiences with the world. Here is Taylor’s review:

Here I am, wading alone in the crystal-turquoise open water, one shark spotted so far. Our speedboat bobs 100 meters behind me, and there’s only one direction to go. One deep breath, and I follow my diving partner from the Zodiac Watches team who has since disappeared, down toward the unknown. There’s nothing but an even larger wall of rock below the surface waves, save for a brightly contrasted cave filled with sunlight 8-10 feet below. I kick my fins, aiming for the tunnel of light. I’m a strong swimmer and probably a bit too confident at times, but this is stuff for an experienced diver. My heart races as I kick forward, grabbing handfuls of water as I visually search for my next breath of air. I rise up into the liquid mercury air bubble just ahead, and it all begins to come clear. My head breaks the surface tension of the saltwater into the hidden natural rock cathedral. 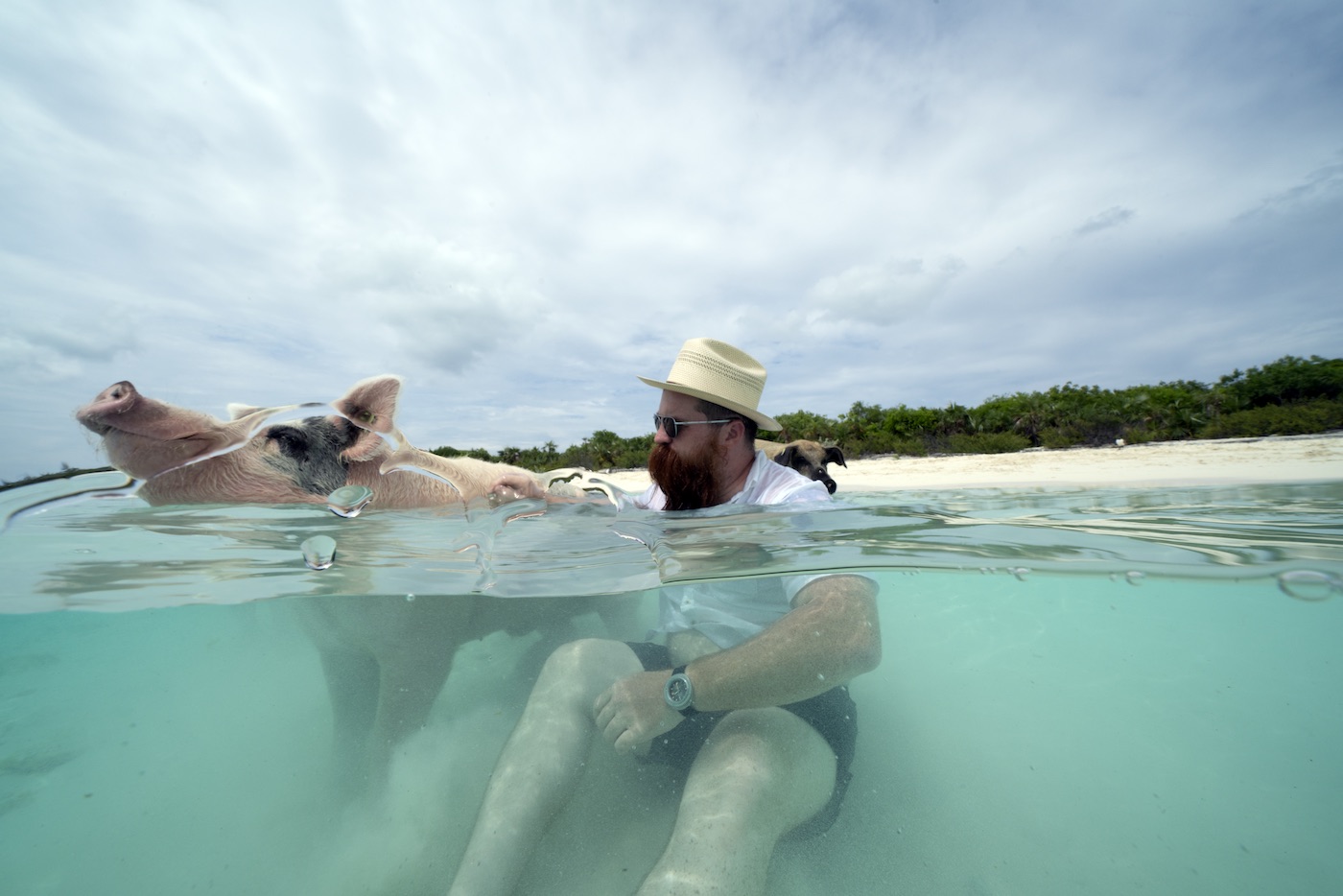 Through my roles as senior editor at Carryology.com and as a full-time product designer (focusing on outdoor and travel gear), I’m very lucky to get to go out and test outdoor adventure gear in some really exciting places around the world. I prefer some element of danger or discomfort — otherwise it’s a bit boring. Sure, it might get me killed someday, but that’s where I feel most alive, so these are considered and calculated risks that I’m happy to take. 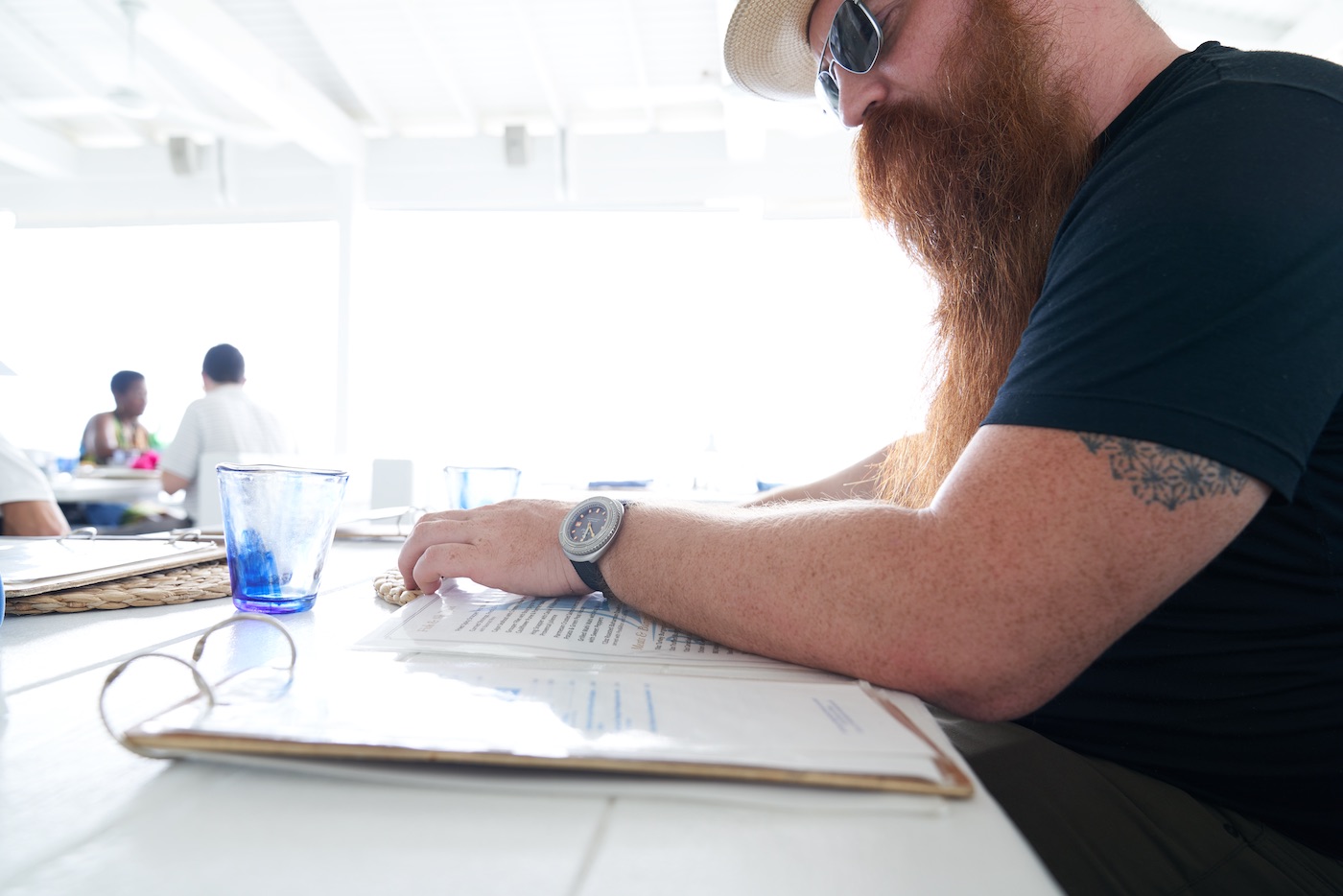 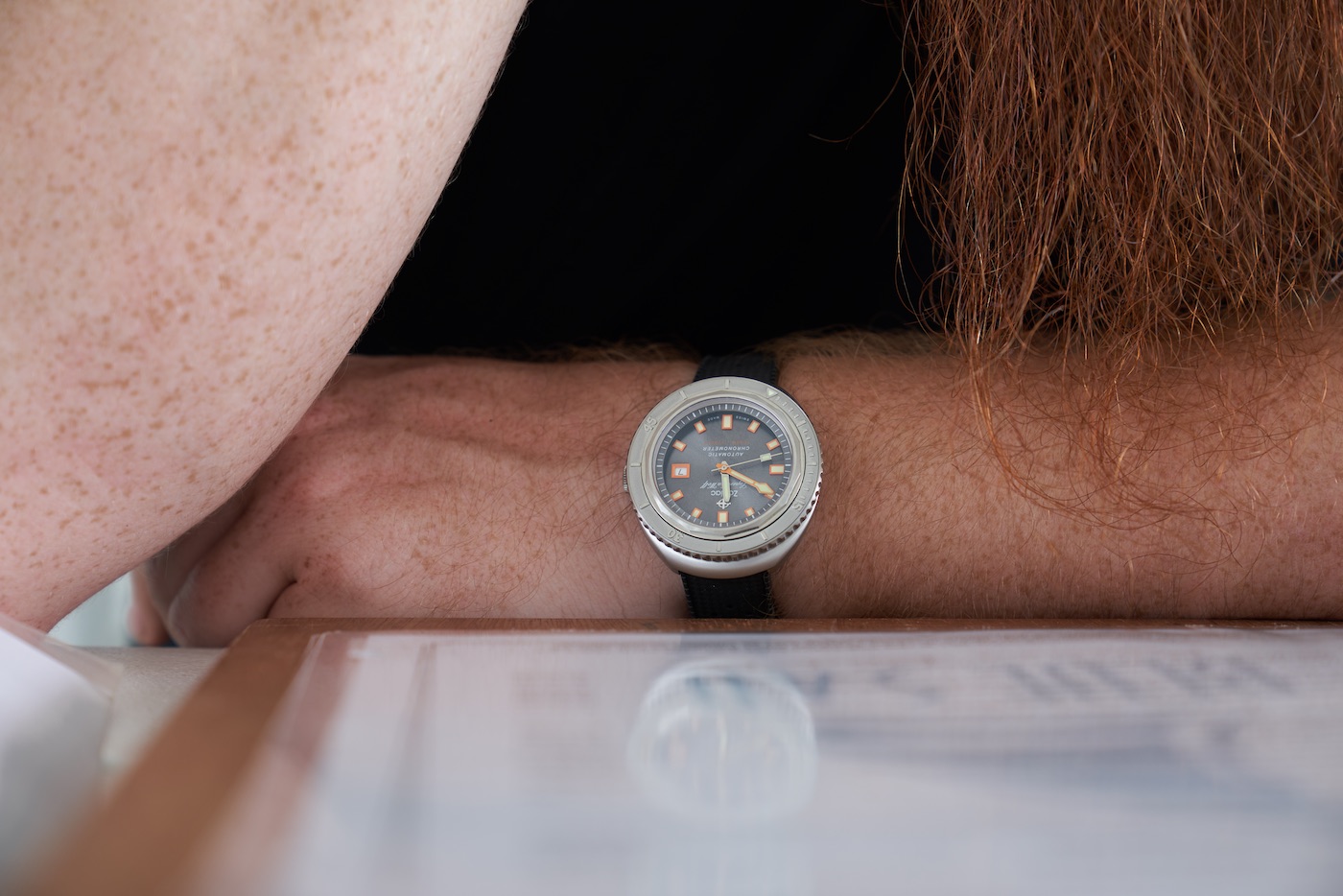 But this particular adventure, despite being designed for maximum pleasure, was a bit different for me. My packing list usually require a three-layer GoreTex hard shell, heavy leather hiking boots with lugged soles, a combination of goosedown and synthetic mid-layers for warmth, gloves, maybe a large-caliber pistol as a last-ditch effort to prevent a bear attack, and more. I traded in all this survival gear for a small Filson shoulder bag packed with sandals, swim trunks, sunscreen, a white linen button-down shirt, and a brand-new 50th anniversary Super Sea Wolf from Zodiac. Polar opposites, eh? 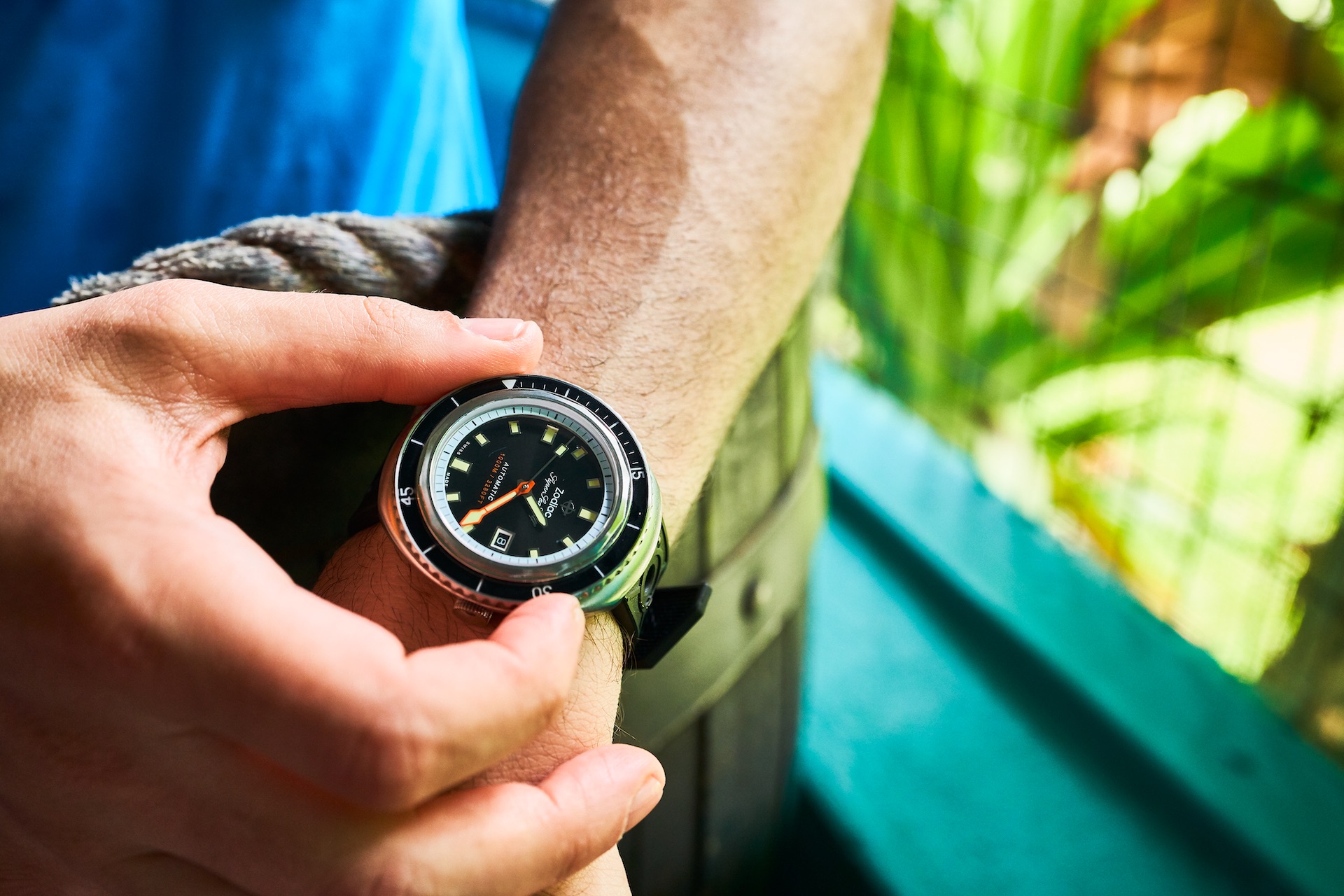 Frankly, that’s what really excited me about all this. I’m used to the former style of adventure. I bring the same bits of kit, knowing exactly how they’ll perform. I’ve got my system down. And now I’ve got to toss that all aside and step (or splash) into the unknown. And I’m happy to say, this is now a world that I want to dig deeper into. Plus, it’s considerably warmer than the places I tend to travel, and that’s certainly a bonus.

But before all that, I was dubious about the no-strings-attached nature of the giveaway. “No way,” I thought. “This can’t actually be real. Maybe it’s some kind of time-share scam. It’s just too good to be true. There has to be a catch… right?” 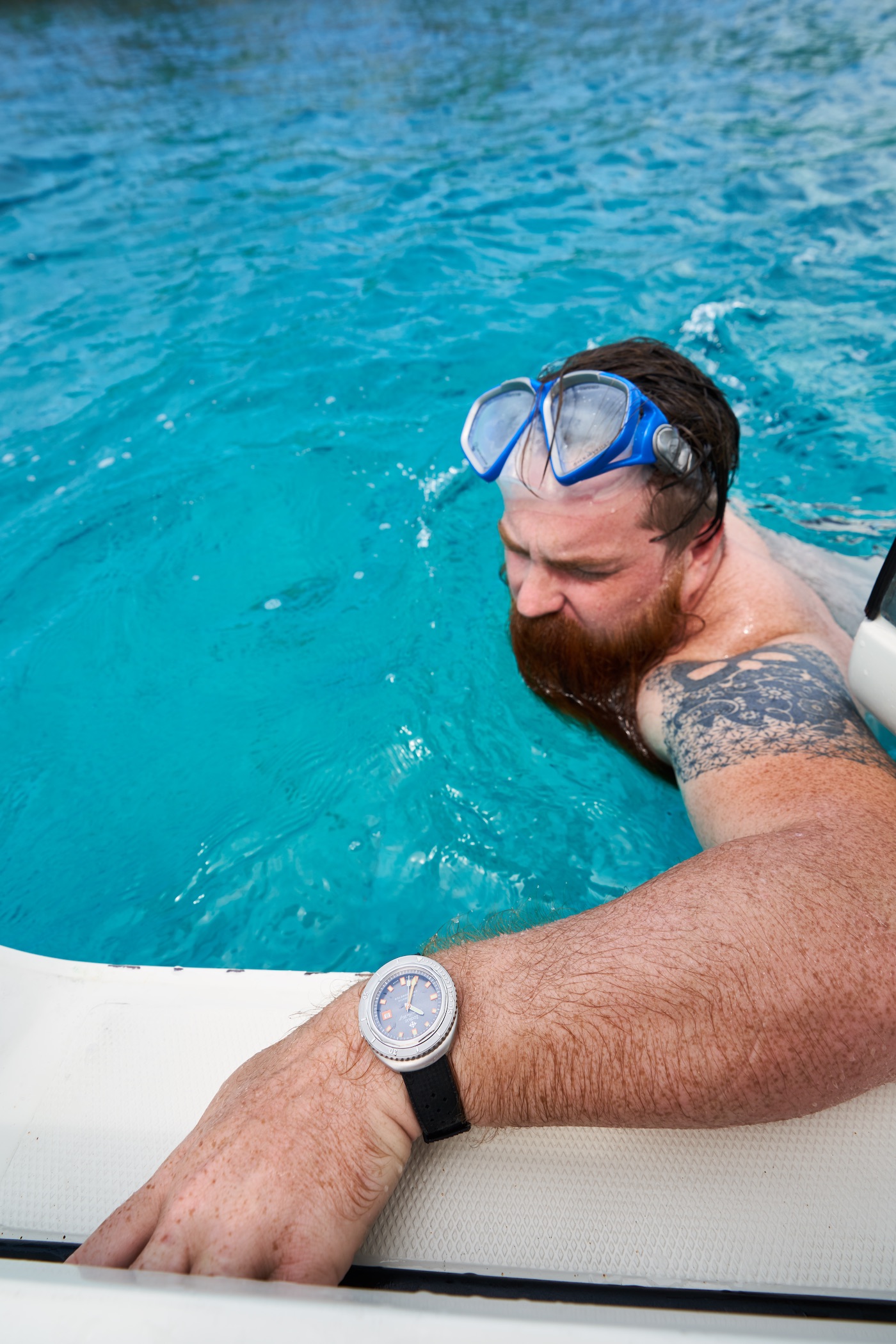 Despite receiving the congratulatory email from the man himself (Ariel from aBlogtoWatch), and despite the Zodiac team reaching out to arrange my flights and subsequently sending over my flight confirmation via email, and despite receiving a Zodiac 50th anniversary Super Sea Wolf in the mail weeks before our departure date, it wasn’t until I was the initial descent on the second of my two flights, looking down at the turquoise reef-speckled island waters… that’s when it all become real. I was going on an adventure with A Blog To Watch and Zodiac Watches in The Bahamas. I finally believed it. 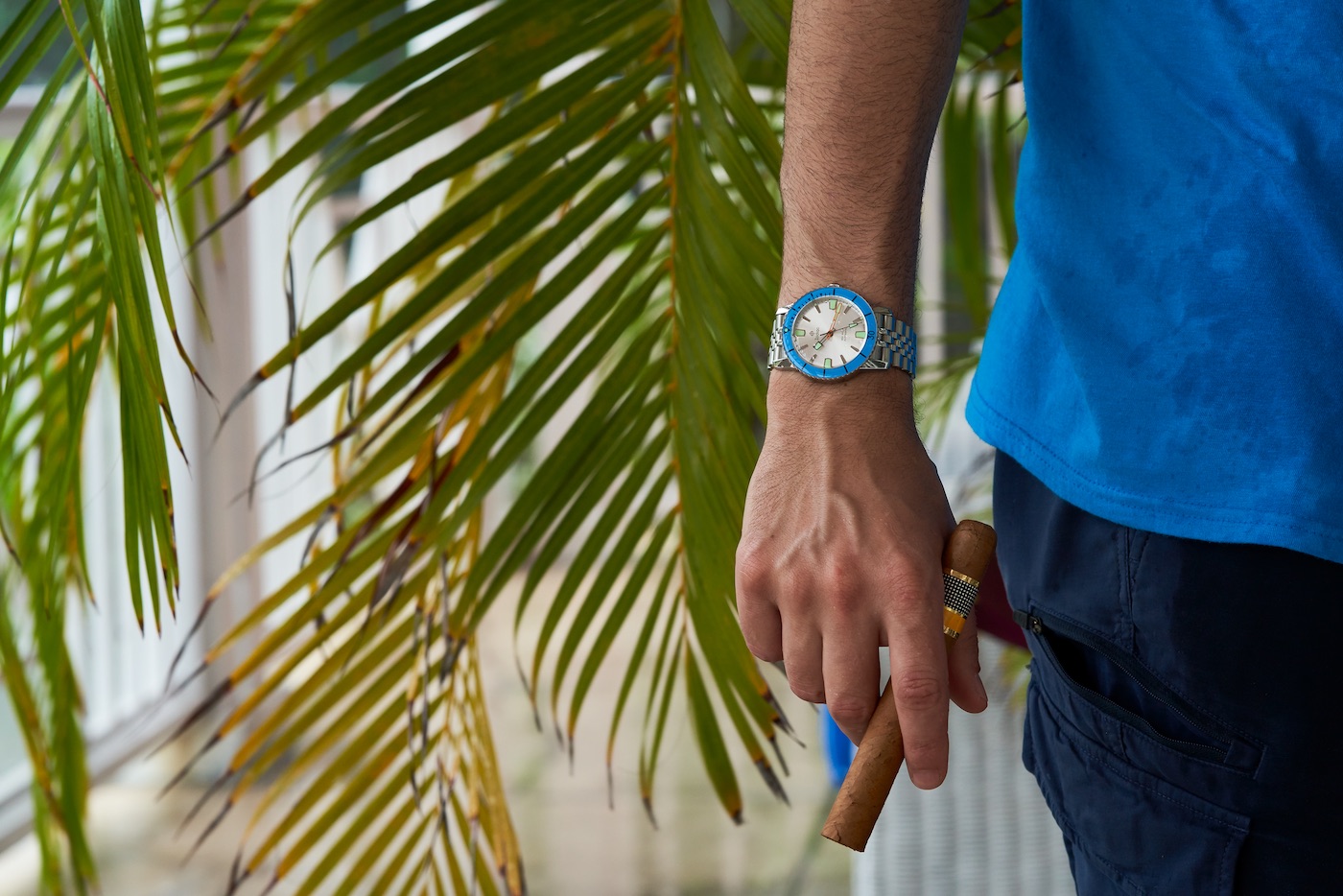 Of course, I was already somewhat familiar with both brands (aBlogtoWatch and Zodiac Watches), but I felt that I had a lot to learn. So, in the weeks leading up to the date, I did some research on Ariel, ABTW, and Zodiac’s products and their history. This gave me a bit more confidence, but I still felt nervous that a joke about some rare 1968 diving model that was revealed in a rare colorway for only two weeks in one small Swiss city would come up over drinks and I’d be left looking like a fool at the table. Well, I’m happy to say that never happened.

Arriving into the late afternoon on Day 1 (of three), I met with the three-person team from Zodiac (Audrey, Nathan, and Chris) and Ariel from aBlogtoWatch. I like to think I’m pretty relaxed when it comes to meeting new people, but meeting four new folks in a relatively intimate setting in a different country can make one second guess oneself. Thanks to some local seafood, a couple of dark-rum cocktails, approximately 27 really good laughs, and being on island time, we all instantly got along like old friends. 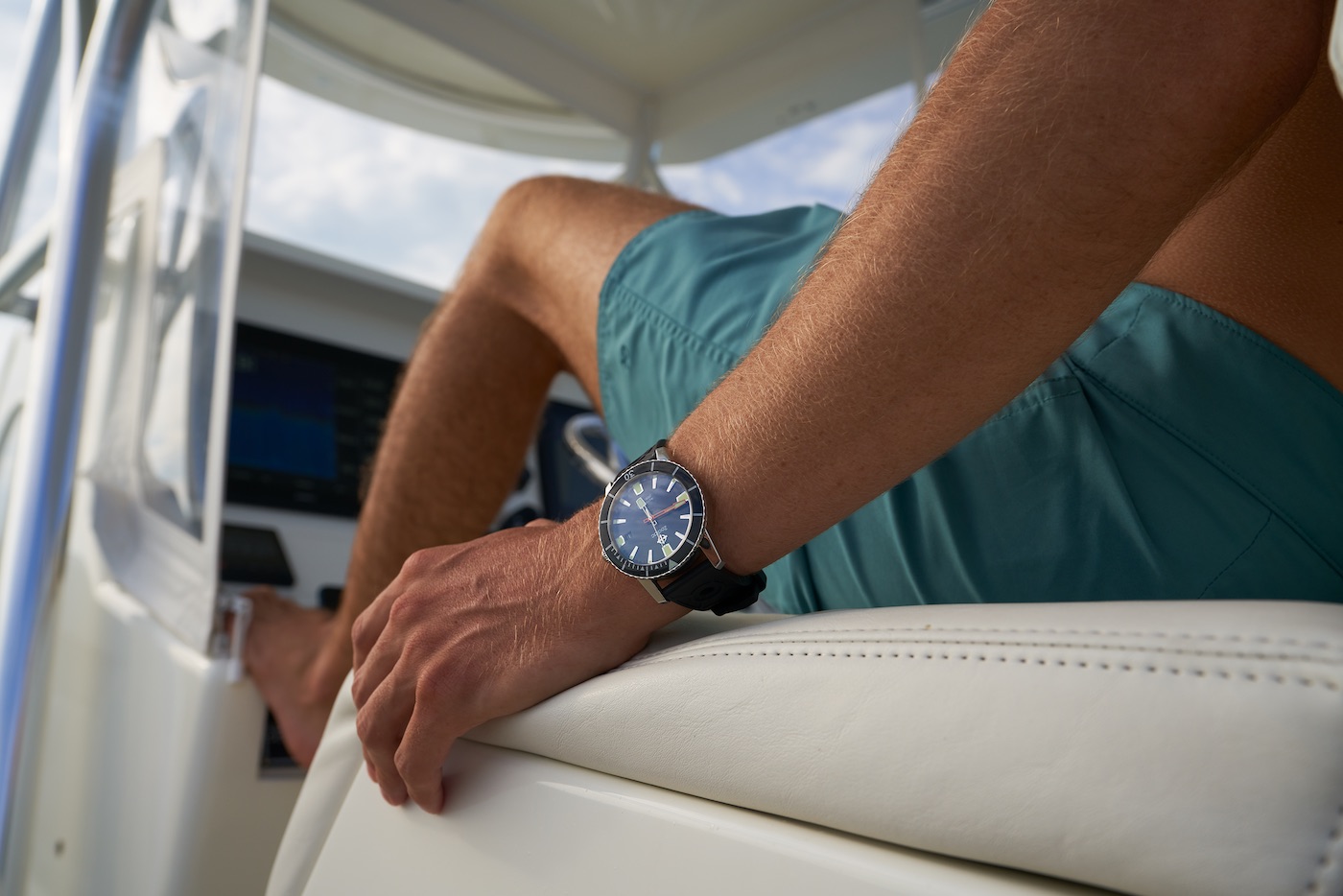 Day 2. Though a belly full of Bahamian crawfish (lobster) and booze helped me pass out the night before, I was up early for sunrise, gathering my gear for the adventure ahead. I double-checked my gear and finally cinched down the vanilla-scented silicone strap of my Super Sea Wolf as I walked out the door from my villa, anxious to see just how waterproof this watch was. 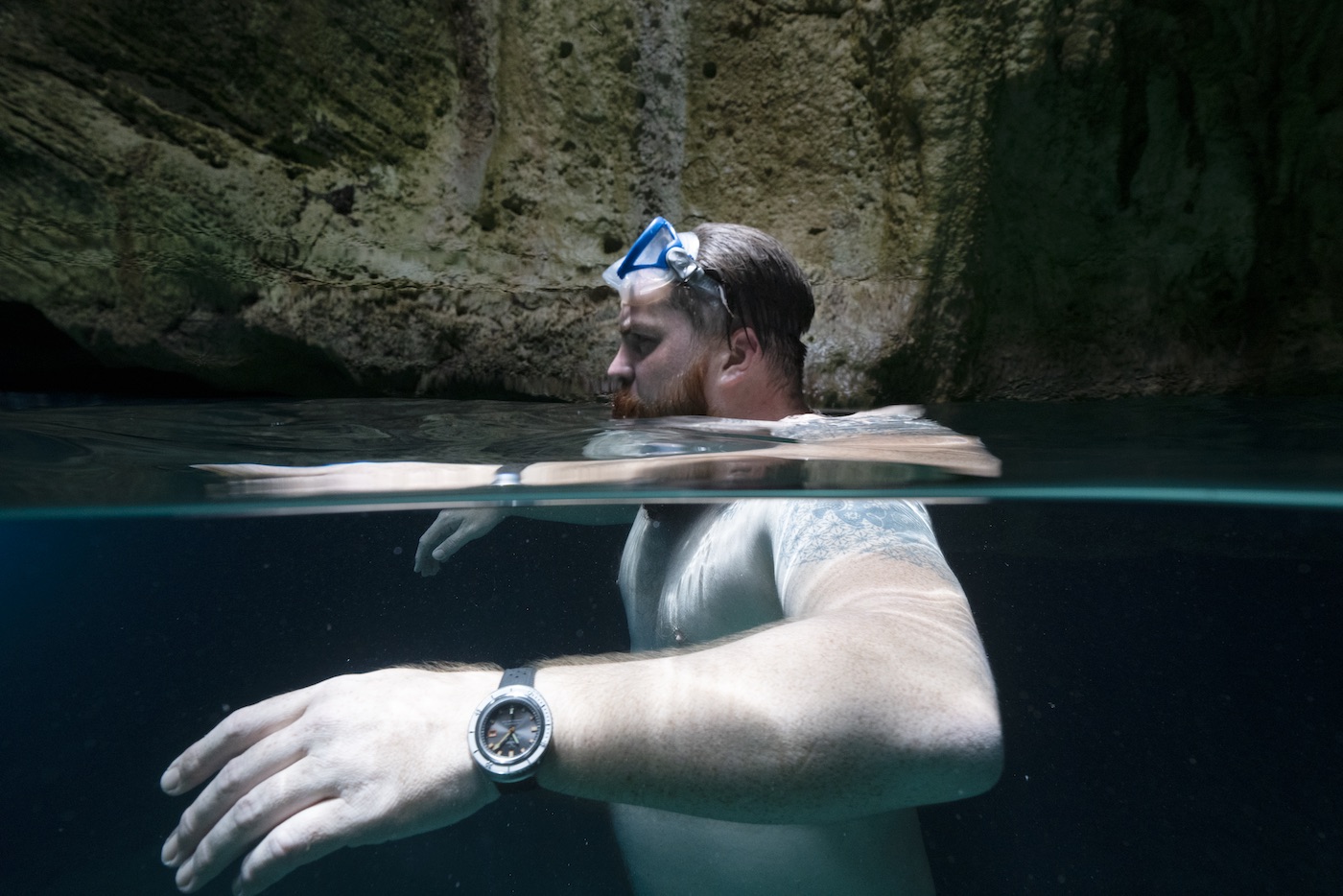 Our boat’s four engines launched us out into the blue-green waters that stretched out in every direction. The cool island air hitting me in the face 60 mph was one hell of a way to blow off any remnants of what might remain of a hangover. The roar from the motors made conversations minimal on the 2.5-hour voyage as our captain piloted us toward adventure via his high tech GPS. It was very relaxed ride, but with one focus: getting there. But where was “there?”

“Here it is,” our stoic captain comments, as we drift to a stop. I’ll admit, I was a bit perplexed. There’s a small rocky island to the portside of our speedboat. And not a traditional “Bahamian island” like you’d image. There’s no beach of any kind, but a 15-feet-tall wall of razor sharp rocks the length and width of a soccer field, reaching up and out from the crystal clear waters. “What is it? Where is here?” 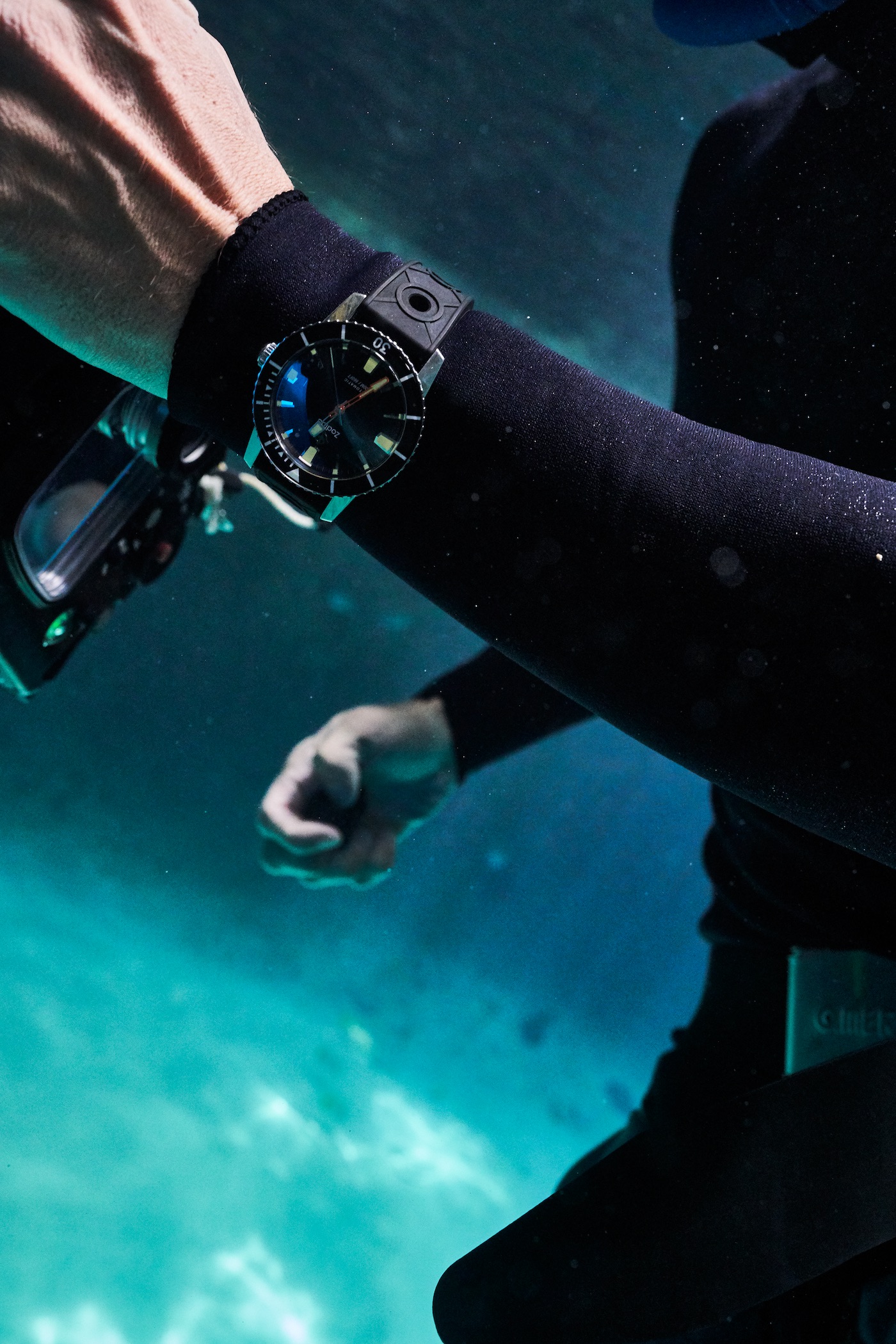 We have the entire cave to ourselves. Bathed in well-defined sunbeams like spears piercing through a collapsed hole in the natural rock ceiling above, I nervously checked my watch. I wasn’t checking for the time, but because I’m not very familiar with doing any type of underwater sea-cave diving with an automatic watch on my wrist. It calmly ticked away in perfect clarity. It is rated for nearly a mile of depth at 1000M (3,280FT). That’s the last time on the trip I felt the need to question my Super Sea Wolf’s water resistance, leaving me to focus on the moment I was in. I felt the Super Sea Wolf cartoon character on the back of the watch laugh at me with handsome confidence. 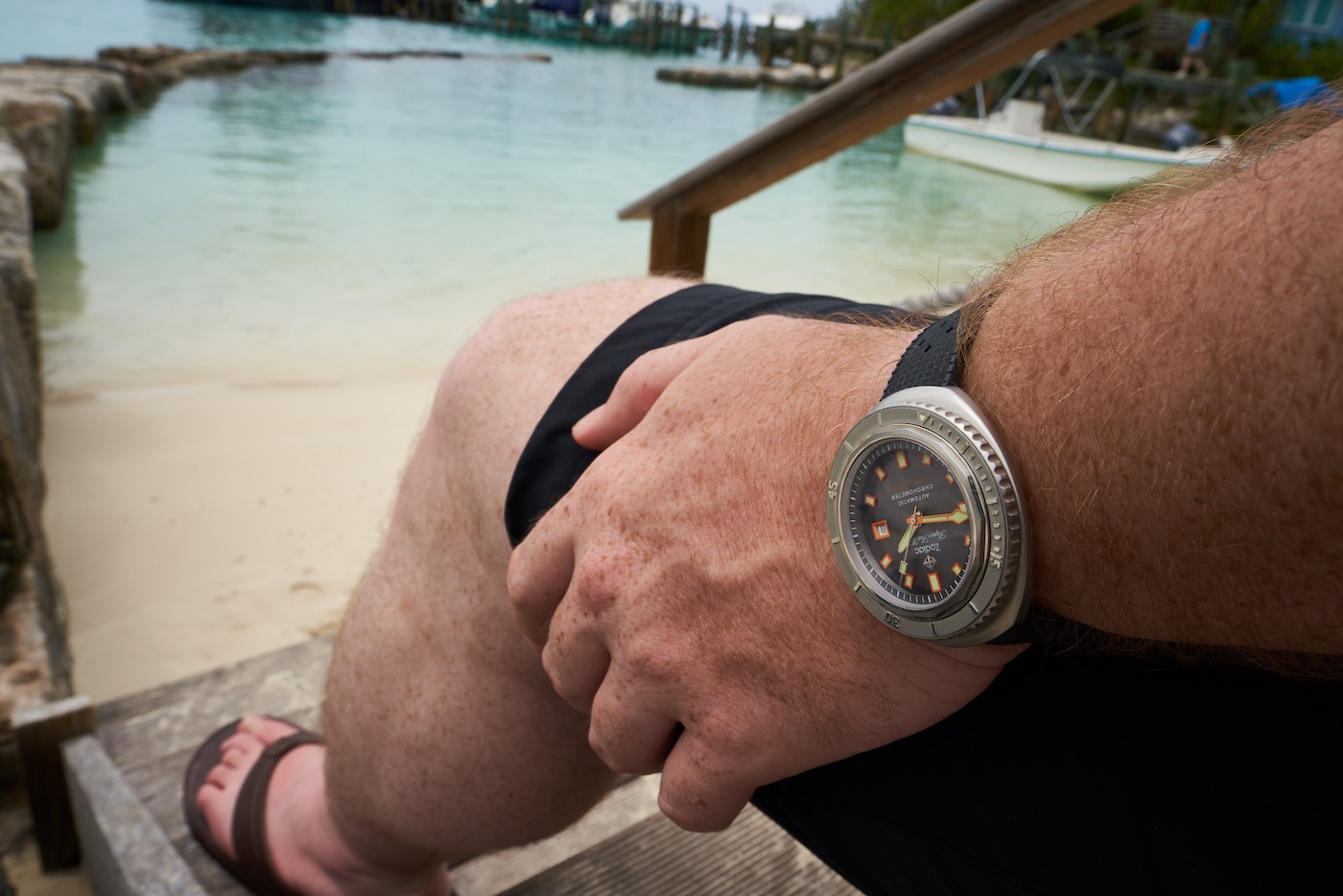 Sharks and schools of neon colored fish danced effortlessly beneath our fins as we silently looked up to the natural cathedral in silence, taking it all in. We had nearly 30 minutes of this peace until, one by one, they began popping up in the water around us. First one human head arises. Then a second. Then 12. Then two dozen human heads, all attached to the respective body of a tourist from a tour group. A few kids scream. The tour guide begins illegally chumming the water, which attracts some small sharks. One teenager begins crying. A mother begins yelling at her children, presumably to behave, in German. Ok, we’re outta here. Onto the next adventure we had planned ahead for the weekend.

In the end, the team and I spent hours cutting through waves on the hired speedboat, explored a sunken ship resting at the bottom of the dark navy blue waters, hung out and shared some treats with the famous swimming pigs (a bucket list item for me), ate and drank like kings and queens, and shared an incredible adventure-meets-pleasure experience together. 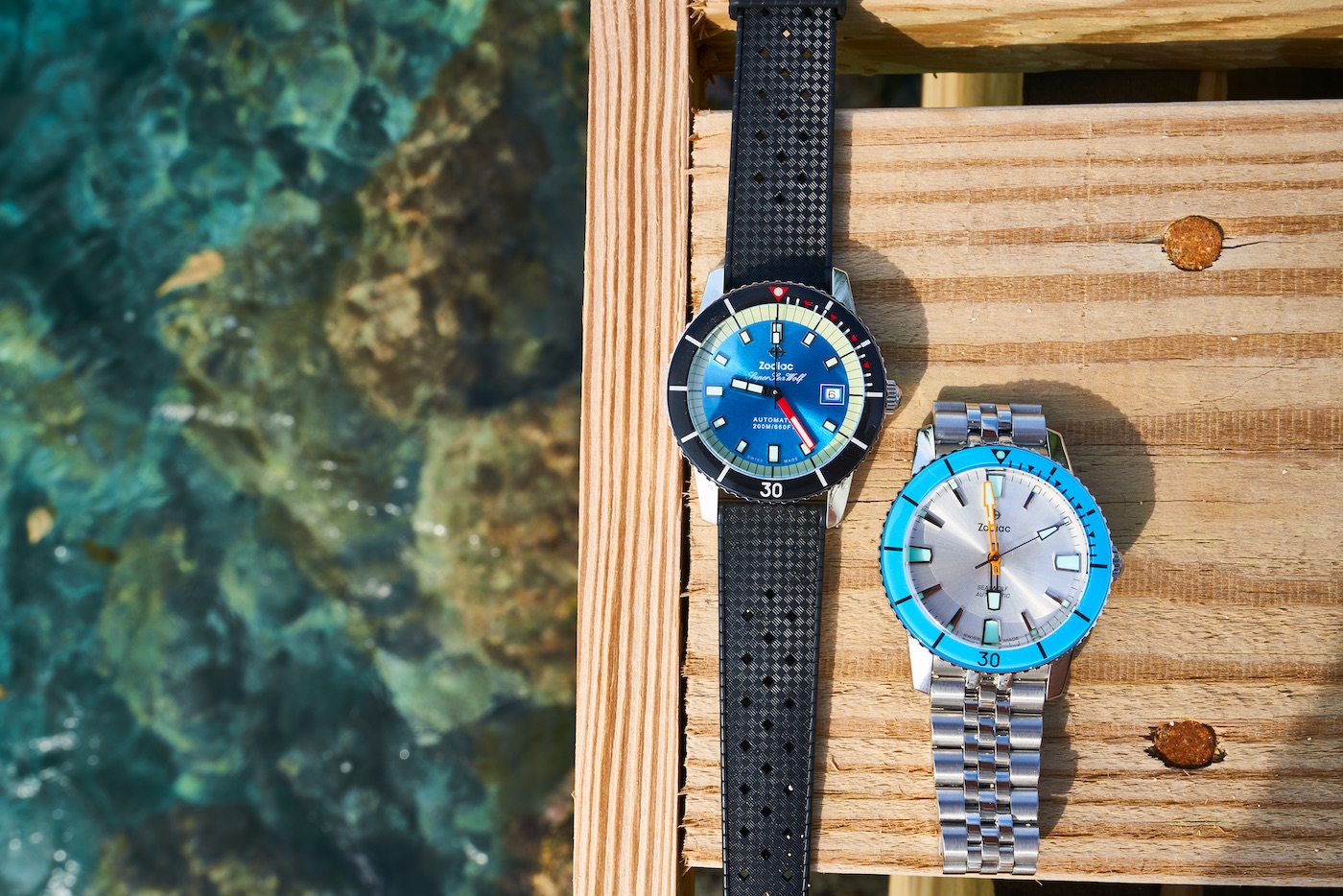 Sure, being surrounded by some of the biggest watch nerds on Earth (I include myself in this group), the reason we were there came up many times in our conversations. We’d regularly swap watches out of excitement, for fun, and for photo opps. I really enjoyed the brand new Super Sea Wolf 53 Compression (ZO9275) with the blue dial when I got to take that particular model out for a spin. But frankly, after that first moment of panic in the Thunderball Grotto, I found myself completely forgetting which was on my wrist at the time while we were out in those waters and while cheersing with cocktails over meals. 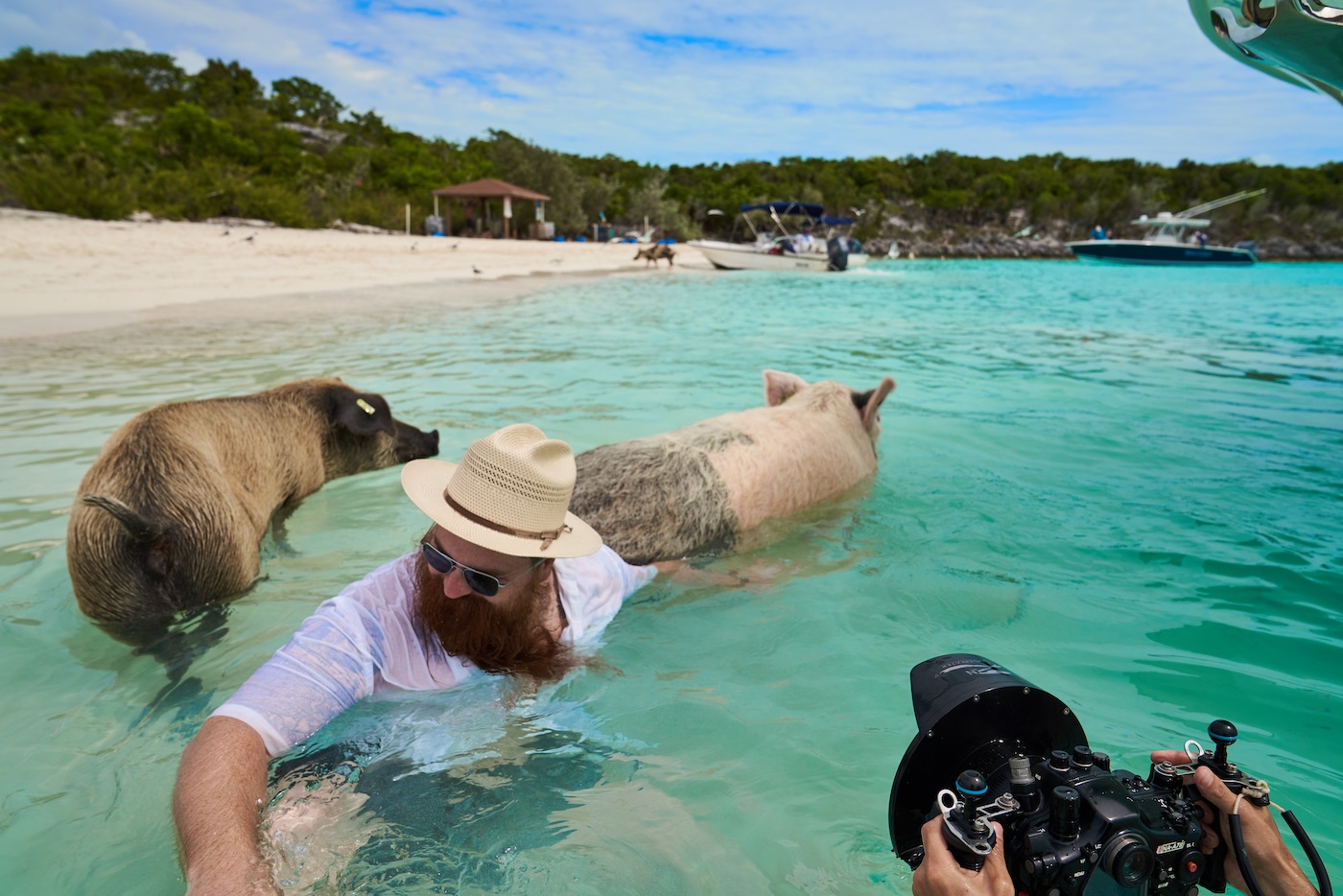 The Super Sea Wolf on my wrist performed its duty, exactly like I had hoped it would, with class and without a single hiccup. In the end, even on extreme adventures where I’m planning for days of sub-zero glacier hiking in a rugged environment like Iceland, that’s what I expect of all my gear — to perform its intended mission perfectly. Every Zodiac watch I wore did exactly that. And hell, it’s just added bonus points that they look sharp while reliably ticking away.