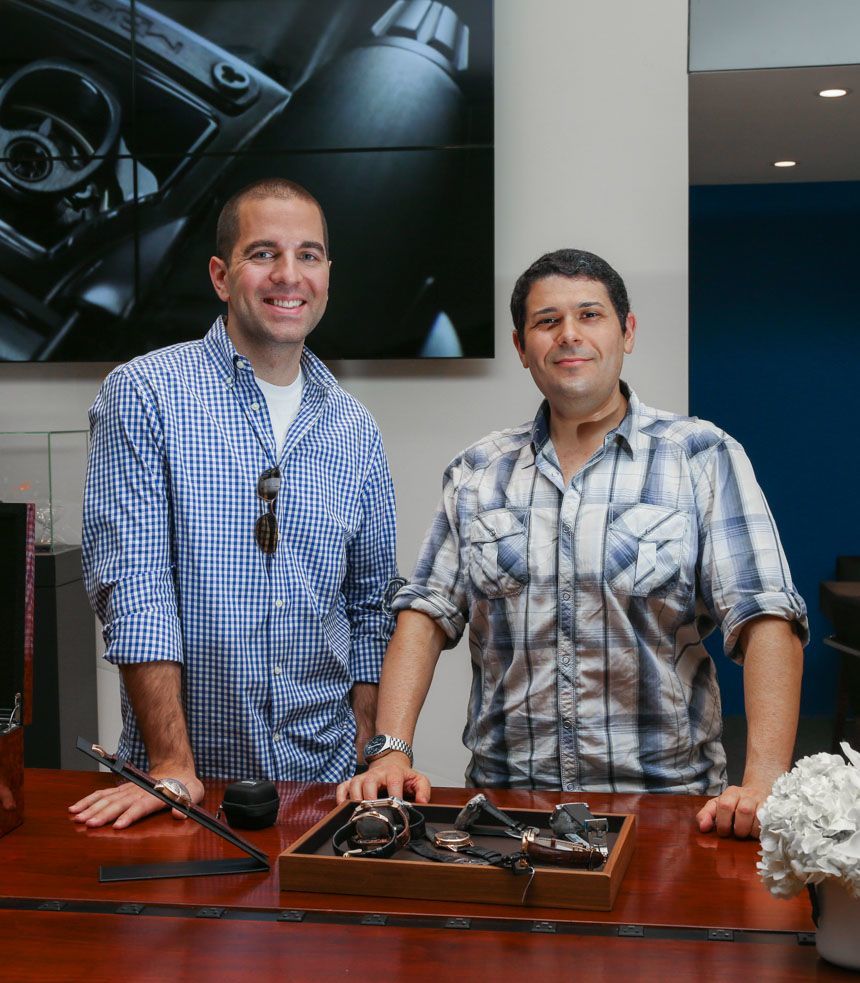 aBlogtoWatch Reader Joins Us For Watch Weekend In Los Angeles Recently, aBlogtoWatch reader Griffin C. from Chicago, Illinois, joined me here in Los Angeles for a few days of geeking-out watchnerd-style and to attend The World’s Most Expensive Watches book party with us. This was a result of Griffin winning a giveaway prize early in the year that we had intended to experience with him over the summer. Unfortunately, despite our best efforts, the originally planned trip to the watch maker RGM in Pennsylvania was cancelled by RGM, and resulted in a dispute between the company and aBlogtoWatch that the online watch community has discussed a few months ago. Nevertheless, despite the setbacks, I had an obligation to Griffin and wanted to make the most out of the situation.

Griffin had never traveled to Los Angeles, and I thought it would be a good idea to bring him to town and give him a great watch experience with people he might not otherwise get to meet. I was fortunate to have him come join me during the right weekend at the Chateau Marmont for my book party and meet local aBlogtoWatch audience members. We then took Griffin out for a full day of visiting some of the best watch stores in Los Angeles, including both the Beverly Hills and West Hollywood Westime store locations, as well as rare brand boutiques with Richard Mille and F.P. Journe. Also in town that weekend was my friend Leonid Khankin, who owns the watch brand Ernst Benz. aBlogtoWatch thanks Westime and Ernst Benz for helping to make Griffin’s watch weekend in L.A. a reality. Leonid being a watchmaker and brand owner, it was a unique experience for Griffin to go “watch shopping” together with him, as well as myself, of course. We had a lot of fun checking out exclusive rare watches and getting some special access to a range of fantastic timepieces. Griffin has offered a travelogue of his experience below, sharing his own thoughts about the weekend in L.A. with aBlogtoWatch. The trip started out when I heard that Ernst Benz would be arranging my flight & hotel in L.A. Not only were they nice enough to fly me out, but the head of the company Leonid Khankin and their Sales Manager Hacik Girjikian would accompany Ariel and I on our trip.

I flew into L.A., not knowing what to expect, but knowing I would be having a great time. After all, I was getting to nerd out on watches with people who know far more than me. Getting the chance to hang out with Ariel on a watch shopping trip could not have been a more unique & memorable experience. As I made my way to my hotel, knowing I had a few hours before the book launch event, I avoided any watch shopping. I spent the afternoon soaking up the sun & atmosphere that L.A. had to offer. Coming from Chicago & its 20 degree cold that weekend, I couldn’t get enough. Finally, at 7:30PM, I hopped into a cab and made my way to Chateau Marmont Hotel for the launch party. Walking into this historic venue was amazing, it felt very old-Hollywood and was something I would have never stumbled upon on my own. Getting there a bit early, I was able to talk to the Hublot representatives and get some 1-on-1 time with the pieces they brought. Having never seen the Hublot MP-05 in person, it was a sight to behold.

Ariel and I talked, scoping out what each of us was wearing (Hublot for Ariel of course, Glashuette Panomatic Lunar for myself). Once the event started, people started filtering in. After that, the event was a blur of good scotch, great timepieces and even better conversations. It was great to meet people of all walks of life who wanted to celebrate Ariel and, of course, watches in general. There was the couple from NYC (he wearing a Daytona, her without a watch) who were driving back across the country. The very nice people from F.P Journe, Orient, & Ernst Benz, in addition to countless watch writers, distributors and owners, it was a stellar collection of amazing people. After a long night, we grabbed some late dinner and I retired to the hotel. If Friday was about the event, Saturday would be about classic watch nerdery. We all began the day with meeting at a classic diner just off Rodeo Drive. I knew I would be outclassed when both Ariel and Leonid showed up wearing watches on each wrist – but I was right in hoping that I would soon get to make up for this. When we sat down, I was able to get some good wrist time with Leonid’s Chronolunar Officer. I’ll admit, I didn’t know too much about Ernst Benz before this trip. However, early on in our conversation with Leonid, I realized just how much he loves watches. Sitting personally with a second generation watchmaker & listening to him describe every major decision that went into the watch was an eye opening experience, and one that I’ll hardly ever get a chance to do again. Once breakfast was finished, it was onto the watches. When watch shopping in Beverly Hills, for me, I had no doubts about where to start: Richard Mille. Though I’ve gotten to experience some RM timepieces before, having unfettered access to anything and everything in the mono-brand store was incredible. I was even able to get a picture with a RM watch on both of my wrists – quite a memorable moment for any watch nerd, I guess! After Richard Mille, we landed at the Beverly Hills Westime boutique. Westime, for me, was one of the two stand out highlights of the trip (and I’ll get to the other one a bit later). Though it is tough competition, Westime had what I really love: a huge selection of ultra high-end independent brands. It was a who-is-who of watches, from Urwerk to HYT, up to my favorite: MB&F. Imagine my surprise when I found out that this was the smaller Westime, & we’d be hitting the bigger one after lunch. Incredible. Once we were done at Westime (for now), we made our way to the section of Rodeo Drive, affectionately known as Richemont Row: IWC, Panerai, Hublot, Cartier, JLC, Vacheron Constantin and Piaget are all within a block of each other. Incredibly, none were that busy that Saturday, and so we had the whole place to ourselves. The real amazing part of this trip is not when you get to try on a rare IWC Ingenieur or Panerai Luminor. It’s when Ariel gives the nod, and they bring out the ‘safe’ watches: the ones not on display. I wish I could show you pictures of some of the rare & boutique only watches we got to see, but sadly, no pictures were allowed (I really tried!). Exhausted from Part 1 of the day, we made our way to West Hollywood for some some much needed lunch. Over Chinese food & tea, the 4 of us recounted the amazing watches we just saw. Narrowing down a favorite wasn’t easy for me, but I’d have to say the MB&F Legacy Machine 2 was one to remember. After lunch, it was over to the big Westime. A friendly & generous man named Leon was going to be our tour guide through their expansive collection. If the first Westime was a small, intimate boutique experience, this one was the opposite: wrist candy as far as you can see. It was easy to be overwhelmed, but luckily, the staff was incredibly friendly, knowledgeable, & accommodating. There was absolutely no pressure to move us from brand to brand, and we got to experience the store at our own pace. For me, motivated by my new-found knowledge of the brand, the first pick was to start off with the Ernst Benz display. I wanted to see more of their watches & get some background from the man himself. Hearing him breakdown the different models, options, & variations was mind boggling. I sort of knew watches, but listening to Leonid made me feel like I never picked one up. His appreciation for his craft gets transferred on to you, and thanks to that, I’ll never look at watches the same again. Heading upstairs to the “haute area,” I was again blown away. Some of the pieces I’ve only read about and some of the pieces in Ariel’s book were now in my hands/on my wrist. This includes MB&F, HYT, Hautlance, Christophe Claret, De Bethune, and to my amazement, an original Daniel Roth Il Giocatore Veneziano. Jaw, meet floor. After recovering from the amazing experience, we left, loaded up with exclusive books, catalogs, and other gifts from Westime. So much, in fact, that we had to stop at the car to drop them off before heading to our last stop – and my personal favorite part of the day – the F.P. Journe boutique. Imagine my surprise when, upon walking up to the boutique, I noticed they were closed. For anyone else that would have been a problem. However, Ariel had arranged for the two people working that day, Jean-Louis & Valencia, to stay after hours, until we got there. As we walked in, I was stunned at the level of detail & design that the boutique had. I should have expected nothing less than that, given the brand. I spent the first 10 mins just taking pictures of the boutique. As we were welcomed in, we grabbed some scotch & espresso at the bar, then Ariel and I were shown to the private viewing area upstairs. There, Jean-Louis brought us a tray of the most beautiful watches I had ever seen. Starting off with a Chronometre Bleu, regular and special Byblos editions, then moving into some of the Octa models, I seriously contemplated walking out with my own FP watch. When we rejoined everyone downstairs, Jean-Louis had one more surprise for us: he decided to bring out some of the watches from their safe. To be honest, after seeing the F.P. Journe displays, I couldn’t fathom what they kept in the safe… but I wasn’t disappointed. We got to go hands out with some of the special black label, boutique only editions of F.P. Journe watches. After being given some limited edition materials, we thanked Valencia & Jean-Louis and made our way back to the car. It was a good thing we didn’t go anywhere else, because it would have been a tough act to follow up. We made our way back to the hotel for some much needed rest before dinner. For dinner, we were back in West Hollywood at an amazing place called Church Key. I was told it was a very L.A. place, and it did live up to its reputation. The energy was amazing, and dinner flew by. Our party talked everything from movies and relationships to parenting and, of course, watches. Everyone already knew each other, but it felt like they had known me for years. After an amazing dinner, I was taken to Soho House for a nightcap. A members only club, it was a great way to end the night. Ariel and I waxed poetic over watches & tequila, as I took in a one-of-a-kind view of the city from their private balcony. After leaving Soho House, the group dropped me off back at my hotel. Exhausted, I said my goodbyes to Leonid, Ariel, and Hacik, thanking them for an absolutely one of a kind two days in L.A. I’m sure our paths will cross again soon. Meanwhile, I have some incredible memories (and wristshots) to remind me of how lucky I was to be a guest of aBlogtoWatch.