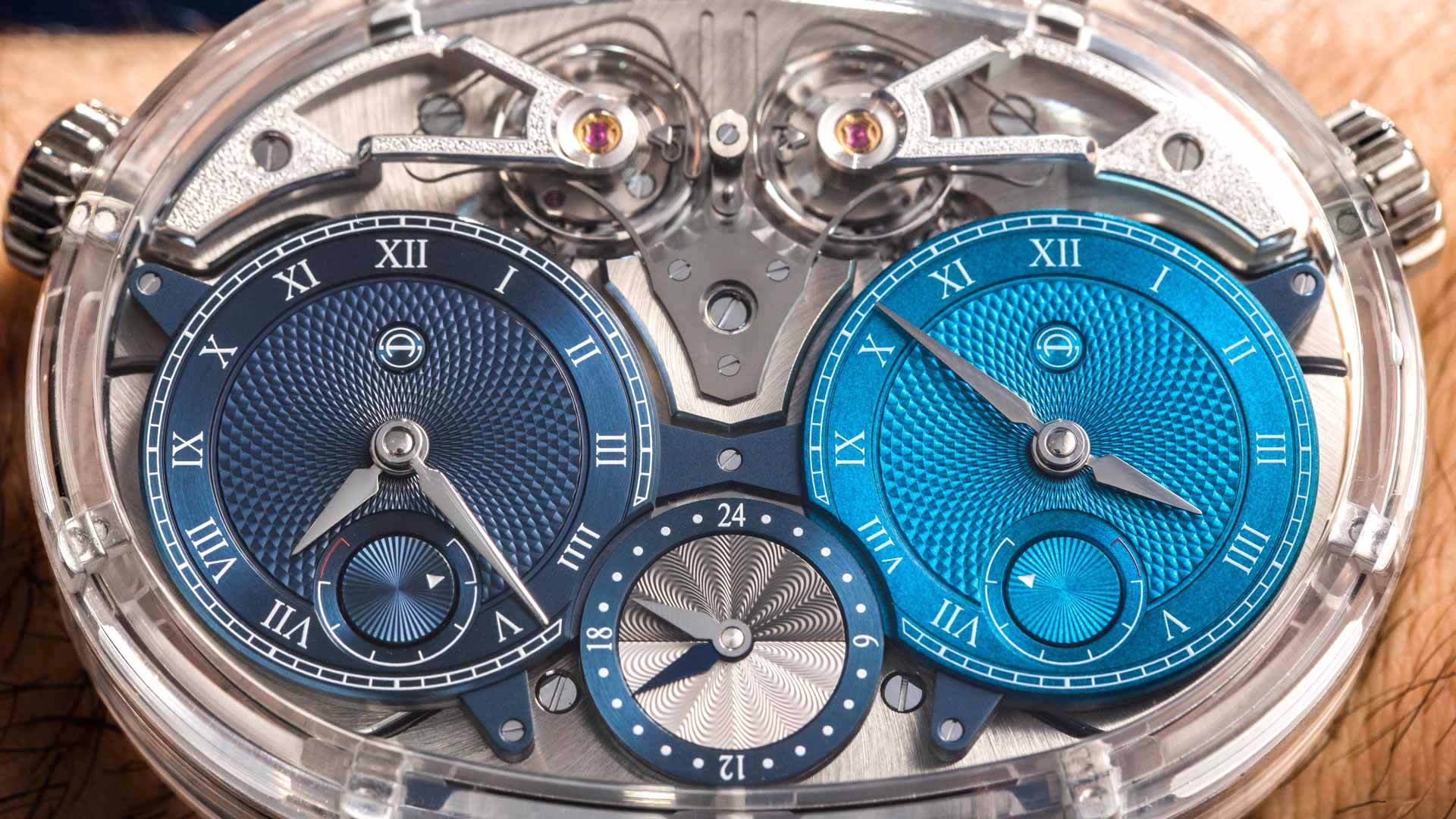 Armin Strom began its fascination with resonant balance wheels in another recent product, the Armin Strom Mirrored Force Resonance watch. That watch has a more traditional round case, as well as a slightly more basic movement, which is mostly different in that it has one dial for the time, versus two. It seems as though the Dual Time Resonance is the product Armin Strom wanted to ultimately release, but felt it was wiser to lead into it with the Mirrored Force Resonance watch as a stepping stone to introduce to watch enthusiasts that it has joined the rare assortment of brands that have a resonance-based movement in its product collection. From a technical perspective, the idea of the in-house-made Armin Strom ARF17 manually wound is to present two independent movements (which exist on the same platform) whose balance wheels synchronize their operational frequency with one another. That is where the resonance part comes in. To understand why someone might want to do this, you need to know a few pieces of foundational information. First, you need to know that balance wheels are subject to errors (from a range of things such as vibrations, gravity, temperature changes, etc.) that negatively affect their ability to be accurate. Anything that reduces balance wheel errors will, in theory, increase accuracy. So, know that the point of any resonance-based watch is as a technique to improve time-telling accuracy. Resonance watches with two balance wheels do not rely on gears that connect the balance wheels at all. They rely on a unique principle in physics that say if you position two moving bodies at just the right distance from one another, their harmonic resonance will eventually (not immediately) synchronize with one another. When it works, the result is the same “averaging” of balance wheel performance that results in a theoretically more accurate timepiece. Resonance watches are rare mainly because they are finicky to design and, from a broad consumer perspective, there isn’t a market for extra-expensive mechanical watches that don’t solve any real-world problems — because if accuracy is what you are after, mechanical watches are not where you generally turn. Thus, complications such as resonance systems with multiple balance wheels are exotic treats for well-funded timepiece aficionados. Watching the two balance wheels in action is a visual treat on the dial of the Dual Time Resonance watch, especially given their front-of-view placement on the top of the dial. Recall that the ARF17 movement is really two movements next to each another, complete with their own crowns. The idea is that because the balance wheels are positioned in a “resonance-friendly” manner, the two movements should have their performances averaged out and, as a result, be telling very similar time. In fact, a way of testing this is to set the same time on both the dials and then, over the course of a few days, see how much (or little) they deviate from one another. Having two dials for the time that use their own running trains but resonant balance wheels is pretty interesting from a watch-nerd perspective, and that is why such a product at this price from Armin Strom makes a lot of sense. Such true watch nerds get the extra “signaling power” of their wrist watch choice as a function of the 59mm-wide (but 43.4mm-long) oblong case that is also 15.9mm-thick. Or you could have no idea what horological resonance is and just wear this product for its distinctive shape and “impressive-” looking dial. There is always a (niche) market for that, as well. Armin Strom worked with a subsidiary of Kari Voutilainen to produce the engraved dials for the times and subsidiary 24-hour indicator, which has a “rich luster” to the open-worked dial that nicely combines classic legibility with a look at elements of the movement. The movement, itself,  is produced from 419 parts operating at an uncommon 25,200 bph frequency (each balance wheel does) with a long 110 hours of power reserve (thanks to the massive mainspring barrels). The ARF17 movement architecture is something to be appreciated, given both its decoration and lovely symmetrical design. One of my small complaints with the Dual Time Resonance watch is the lack of a seconds hand (or hands) on the dial. Seconds hands are all about reading time with precision, which does make sense on a wrist watch whose entire point is about accuracy. The Armin Strom Mirrored Force Resonance watch does have dual seconds indicators, so perhaps Armin Strom just wanted to do something different. Complications on the watch are more for travelers, actually, as the dual times on the dial also come with a handy 24-hour dial (with two hands) that acts as an AM/PM indicator for each of the dials. Inside each of the time dials is a power-reserve indicator, but the wearer of the watch winds both mainsprings at the same time when winding the right crown. Armin Strom merely put two power reserve indicators to impress upon the wearer that the regulation systems indeed run off their own independent power sources. Quirky, complex, and legitimately cool, the Armin Strom Dual Time Resonance watches will certainly be rare and exotic wrist watch treats for collectors with the budget and mentality to appreciate such a product. Layers of horological knowledge are required to first understand the purpose of the resonance-based mechanism, and it takes courage and confidence to pull off a large (albeit comfortable) watch that has this type of shape. That said, I am pretty sure I’d be immediate friends (or at least friendly) with anyone I encountered wearing one of these. Price for the Armin Strom Dual Time Resonance watch starts at $169,000 USD in titanium, $185,000 USD in 18k white- or rose-gold, and goes up to $268,000 USD in sapphire crystal. Learn more at Armin Strom’s website here.