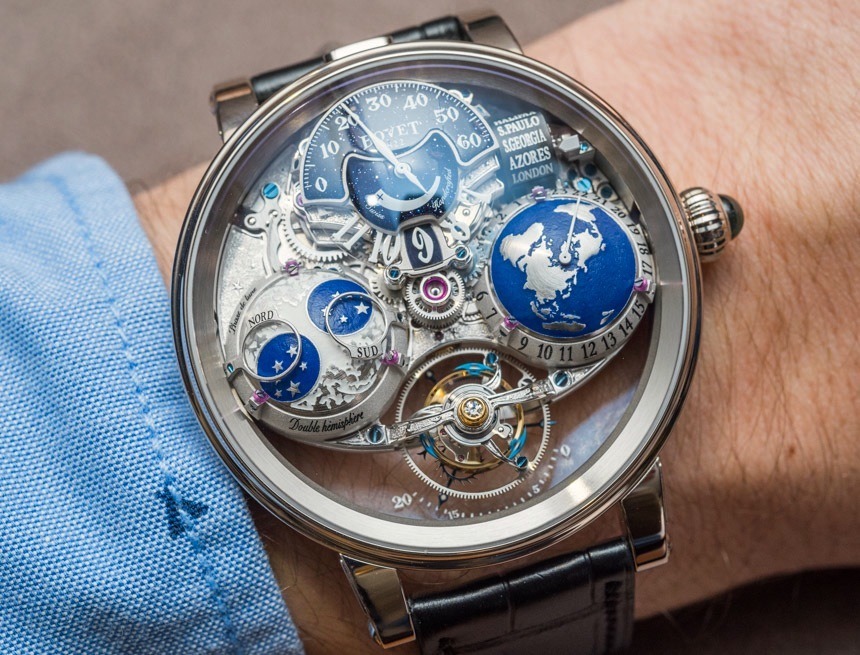 If you ever want to truly and distinctly feel as though small horological gnomes are behind the design, production, and assembly of your high-end wrist watch, then something like the new-for-2016 Bovet Recital 18 Shooting Star is a good place to start looking. Few timepieces can combine such a sheer majesty of details, unconventional design, and complications in a package that is as much fantasy as it is a piece of functional, mechanical art. aBlogtoWatch debuted the Bovet Recital 18 Shooting Star watch here at the outset of SIHH 2016. Bovet isn’t a brand that presents at SIHH but, rather, nearby in Geneva at the same time. This is important to note because the brand doesn’t display at Baselworld either. I often like to place the brand in a thematically similar position as Parmigiani because, in their own way, each has a lot of watches that focus on technical merits and designs which, given Western standards, are unorthodox at best. Not all Bovet watches are to my aesthetic liking, but the watches themselves don’t seem to mind much. That type of confidence earns my respect, and I would pretty much wear any Bovet watch simply as a celebration of its ability to successfully be different and interesting. You don’t really wear a Bovet as a fashion item or as an accessory. You wear a Bovet because of what it is, and you don’t ask a Bovet to be anything other than what it is trying to be. Sometimes, that type of confidence in a product is reassuring because you never get the feeling what you are wearing has an identity crisis.

The simply epic Bovet Recital 18 Shooting Star and some of its functions in operation! Keep an eye out for a full hands-on article in less than 5 hours from now on aBlogtoWatch.com, with all features explained and beautifully photographed! #ablogtowatch #watchnerd #watchmaking #watchporn #horology #instawatch #womw #watchmovement #tourbillon #tourbillonfanatic #bovet #bovetwatch #recital18 #gmt #canon5dmarkiii #swisswatches #watchesofinstagram @bovet1822 The most pleasure anyone will get out of a Bovet Recital 18 Shooting Star is in simply operating it and looking closely at the dial. Bovet designed the entire movement and dial to merge together and the details are outstandingly interesting. One detail that is easy to miss is the three small wheels which move the globe to the right of the dial. These wheels are produced from synthetic ruby – the same material as watch “jewels.” Neat to look at, they also create an extremely low friction connection so that the globe can turn again and again with minimal wear. Another related detail is the globe itself. A mere glance might cause you to reasonably assume it is just a half-globe, but it isn’t. According to Bovet they were unable to find an existing full map of the globe in this shape. So what they needed to do was actually commission someone to produce a full map of the earth on this dome-style half-globe shape – and that is what they did. Spinning once each 24 hours, the globe has a hand over it which indicates either a second time zone or can be set to be a synchronized 24-hour hand. The hand and the globe can move independently, which is of course part of the inherent complexity of the system. Moving the 24-hour GMT hand over the globe is where more interesting fun comes in, as it is linked to the “double drum” reference city selector placed just over the globe system. This is perhaps one of my favorite complications in the Bovet Recital 18 Shooting Star. When you press in the crown, the reference city advances. To get all 24 major time zones, there is a drum that sits inside of the outer drum. This makes more sense once you see it in operation – and it is super cool. I’ve always liked rolling drum-style displays, but they are quite uncommon. Christophe Claret is a particular fan of them and designed such drums into Jean Dunand watches (lastest one here), as well as all the current timepieces from Maîtres du Temps. In the Bovet Recital 18 Shooting Star, Bovet designed these carefully moving drums to work along with the indicator arrow to indicate the second time zone in combination with the GMT hand which moves over the globe. It works surprisingly well and is elegant in its execution on top of that. Moreover, playing with the system by pressing in the crown is probably just too temping a means of overworking the movement and potentially prematurely breaking something, since the owner of a Recital 18 will likely be playing with this complication quite a bit. Opposite the GMT globe on the left side of the Bovet Recital 18 Shooting Star’s dial is a moon phase indicator, also offered on a dome-style display. Here, we have a “double moon phase” which is really just a mirror representation of the moon given its relative phase as seen from the northern or southern hemisphere. Bovet uses a moon phase indicator system which is accurate to about 122 years before it requires adjustment – but I really doubt anyone will have this or any other mechanical watch operating continuously for 122 years. Once again, you see use of the very cool tiny ruby wheels used to ensure that the dome turns with minimal friction. At the top of the dial is the indicator for the time with an included power reserve indicator. Bovet obviously designed the dial of the Bovet Recital 18 Shooting Star to have four “hemispherical” quadrants consisting of the four round areas which are the GMT globe, moon phase indicator, tourbillon, and upper display for the time. This latter section includes complications as well such as the retrograde display for the minutes and the jumping hour indicator. As far as “unusual” displays for the time go, this is actually decently legible and, of course, an exercise in complication for complication’s sake. That is, after all, why you could spend several hundred thousands dollars on a mechanical watch, right? Dial and movement, as stated above, are more or less merged into one and the result is (at least in my opinion) a glorious mixture of mechanical and artistic design. Not only is the architecture of the in-house made Bovet caliber 17DM01-HU movement visually interesting, but it offers the viewer so much to look at in terms of how the mechanism operates. On top of that, there is a lot of hand-decoration as well as engraving to enjoy. Turn the watch over, and most of the rear of the Bovet Recital 18 Shooting Star is full of hand-engraved stars and other “views from space.” The fantasy-like “skyscape” is attractive and features sections in 18k gold. Given the “visibility” theme of the movement, one can intimately view the operation of the tourbillon from both sides of the case. Bovet printed part of the second scale on the rear of the sapphire crystal in order to read it from the front – just another small but appreciated detail which shows the effort of the tiny watchmaker gnomes in action. When you invest in a timepiece of this ilk you should really be investing in some extreme if not obsessive attention to detail.