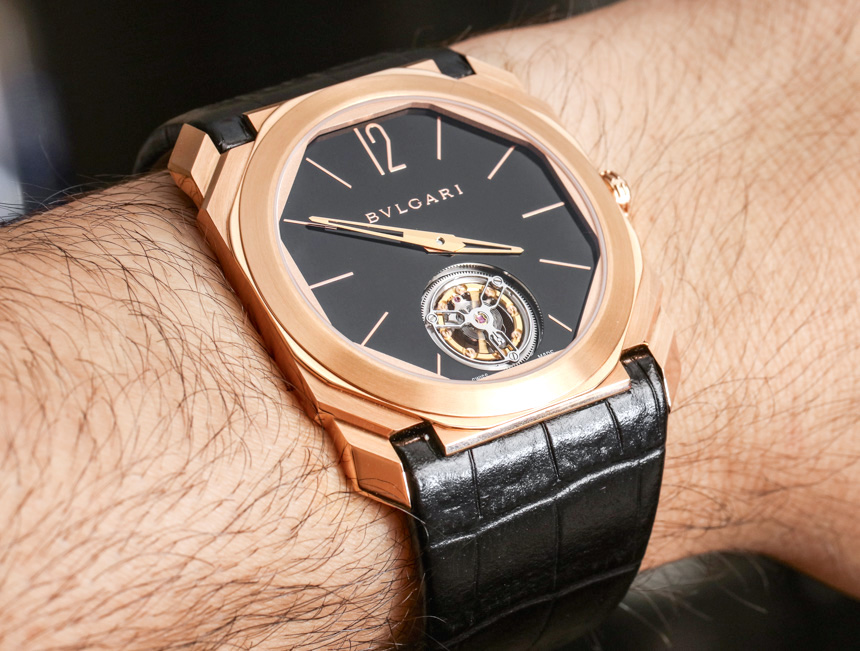 Bulgari’s main appeal for those seeking high complication – or at least high-effort – mechanical watches is a mixture of technical competency and refined design. These are nerd-approved watches for contemporary fashionista tastes, something that is not entirely the norm in the watch world where traditional conservatism usually reigns supreme. Bulgari arguably leads the pack for “fashion house” brands that are deadly serious about their horological credibility – despite the fact that the majority of the overall company’s profits comes from men’s goods such as jewelry. If that fact bothers you as a potential male consumer, all I can say is that you are missing out. The Bulgari Octo Finissimo originally came out in 2014, and this includes the manually-wound time-only version as well as the tourbillon models – each of which I am reviewing here. Of course, the Octo Finissimo needs to be understood within the larger context of the Octo watch family. Originally designed by Gerald Genta (“Octo” implying the eight-sided dial design) the Octo as we know it today was redesigned and incorporated into the Bulgari brand (that at one point purchased and fully incorporated all that was Gerald Genta into itself). Since becoming fully “Bulgarized” the Octo, with its squared case and rich assortment of curves and angles has become the most popular timepiece collection for the brand. What makes the Octo so popular is its modern, almost architectural sense of visual fascination, which heralds classic form, but is entirely contemporary in its appeal. Masculine yet refined, a design like this, even as a dress watch, matches modern urban landscapes from buildings to automobiles in a way that most traditionally-designed timepieces simply do not. The specialty of the Octo is in its ability to blend curves and angles, as well as brushed and polished surfaces in a way where the contrast between the various elements is as eye-pleasing as the harmony between them. That delicate balance is very Italian in my opinion, and of course as a Rome-based brand, that isn’t something that should be strange for a Bulgari watch. The timepieces are produced in Neuchatel-Switzerland, with the movement production and design being in-house. What Bulgari introduced with the Octo Finissimo was an “ultra-thin” version of the standard, thicker-cased Octo. At 40mm wide, the Octo Finissimo is a 5mm thick “pancake” version of its girthier relative. Given this extreme thinness (especially for a mechanical watch) the Octo Finissimo maintains the interesting angles and depth of the Octo design. It also happens to be quite comfortable on the wrist – just don’t accidentally sit on it… Aside from about $100,000 in price, little separates the Octo Finissimo from the Octo Finissimo Tourbillon in visual design other than the tourbillon-based movement of the latter. The cases are for the most part the same, and the appeal – as modern “high character” dress watches – makes the preference for each a matter of taste and how important it is that you show off your disposable income. Neither is an accessible watch when considering value-conscious budget timepieces available, but neither feels absurdly-priced given the quality and competition. With the Octo Finissimo Tourbillon, customers get the added benefit of saying that their timepiece is the “thinnest tourbillon” in the world. For a while it was Piaget who kept making strides to make the “thinnest” this or that around. Piaget still has some records for thinness – such as the thinnest mechanical watch with the Piaget Altiplano 900P. That means it beats the Octo Finissimo by a little margin, but I have to be honest – once you wear the watch it doesn’t matter. At about under 6 or 7mm thick, all very thin watches feel about the same. It is really just a matter of personal style at that point. If your street cred hinges on whether or not you have the thinnest mechanical watch around – you run with some odd cats for sure. When Bulgari released the Octo Finissimo Tourbillon the company they beat wasn’t Piaget but rather Arnold & Son, who came out with the UTTE in 2013. Now at just 5mm thick, with an even thinner movement that is just 1.95mm thick, I don’t think anyone will want to make a movement that is more svelte and still use metal. This is just getting into “dangerously fragile” territory. What you need to know is that the Octo Finissimo is a precious metal wafer on your wrist, and still manages to be masculine – a difficult thing to do in the watch world. One design element which allows the Octo Finissimo movements to be thin is the fact that they can also be wide. All Octo Finissimo watches have expansive sapphire crystal case backs which offer a view into the Bulgari-made movements. The relatively wide area offers room for the parts to be laid out without having to be stacked on one another, which allows for the thin profile. In an era where watches are bigger in diameter it is a clever solution, and one that doesn’t make the watch feel as though the case is too large for the movement contained within it.