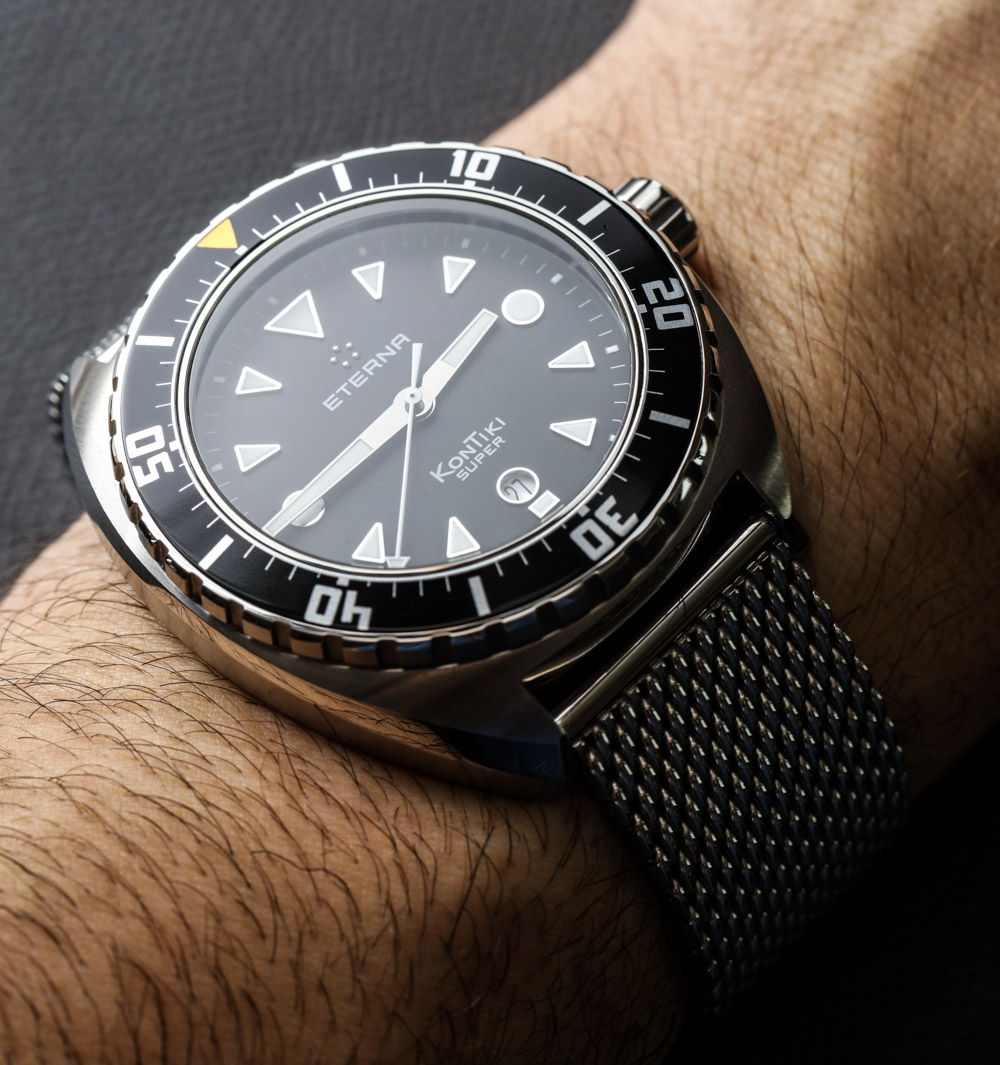 Among the many great historic dive watch “families” is the Eterna KonTiki. The famed range of sport watches has had a legion of variants over the years and has dabbled in entry-level to exotic depending on the model and the direction the company was going. What is clear, however, is that the personality and heritage of the KonTiki is too strong for the brand to ignore, so let’s take a look at the more recent generation of 1273.41 Eterna Super KonTiki dive watches, and see what this rather affordably priced “Super KonTiki Date” watch is all about.

aBlogtoWatch debuted this new Eterna Super KonTiki Date watch here back in 2015 when it was first introduced. Swiss Eterna decided to return to the roots of the KonTiki a bit by producing a relatively simple but easy-to-understand-and-wear Super KonTiki dive watch with a large tonneau-shaped case and powered by a sourced Swiss Sellita caliber SW200-1 automatic mechanical movement.

As you perhaps know, Eterna also produces its own movements which currently consist of the rather capable Caliber 39 and its various executions. Eterna designed the Caliber 39 as a “base movement” which means it is designed to incorporate a variety of complication modules such as a chronograph. Since the Eterna Super KonTiki Date is more simple, having a basic three-hand movement with the date, it probably wasn’t necessary to use a simple version of the Caliber 39 versus a Sellita SW200-1. That might have added a bit of “collector appeal,” but I don’t think the added cost of the watch would have been necessary. As of right now, even the “top” version of the Eterna Super KonTiki Date (as seen here) on the mesh metal bracelet has a retail price of $2,000. Now, I don’t mean to imply that the Super KonTiki is in a league of its own without competitors – as there are many – but rather that there is a lot of value here for the money and more high-end Swiss dive watches can easily range from $5,000-$15,000 (and up). What you also probably know is that the dive-style sports watch segment is perhaps one of the most competitive (if not the most competitive) spaces in the enthusiast watch market. Options in the under-$3,000 range are vast, including models form major and minor brands, as well as models from brands coming from a range of countries (even though the Swiss and Japanese ones are the most desirable). What Eterna has done with the Eterna Super KonTiki Date is seemingly pack a slick design into a high-end-feeling package with an affordable movement that makes for a solidly made all-purpose Swiss sports lifestyle watch. Moreover, while Eterna tweaked the design here and there, this modern Eterna Super KonTiki is directly inspired by the 1970s models which sported a similar color palette and case design. For this modern iteration, Eterna decided to up the case size to a burly 45mm wide and 12.6mm thick in steel. As a dive watch, the Eterna Super KonTiki has 200 meters of water resistance with a screw-down crown. That is enough for recreational diving, and over the dial is an AR-coated flat sapphire crystal. Eterna opts for a slightly glossy black dial with applied and polished hour markers and matching hands. The thick areas of painted SuperLumiNova allow the dial to have very good legibility and the polished sections make for some reflections when the dial plays with the light. Normally, I am against reflections, but Eterna has a purpose for them here. First of all, Eterna cleverly doesn’t use any rounded polished surfaces on the dial, as they are all flat, for the most part. This helps reduce glare and still allows these elements to reflect with the light. Why? For shininess, of course. It seems silly, but yes, a slight light reflection on the dial brings visual attention and, when done right, gives watches a more “high-end feel” versus a strict tool watch personality.

Dial design proportions are well done, and I appreciate the overall symmetry on the dial. Little details are welcome, such as the lumed arrow tipping the seconds hand and the proper length of the hour and minute hands. The design of the hour markers with some round and some “pizza slice” in shape is going to be a matter of taste, but the overall composition is done well.