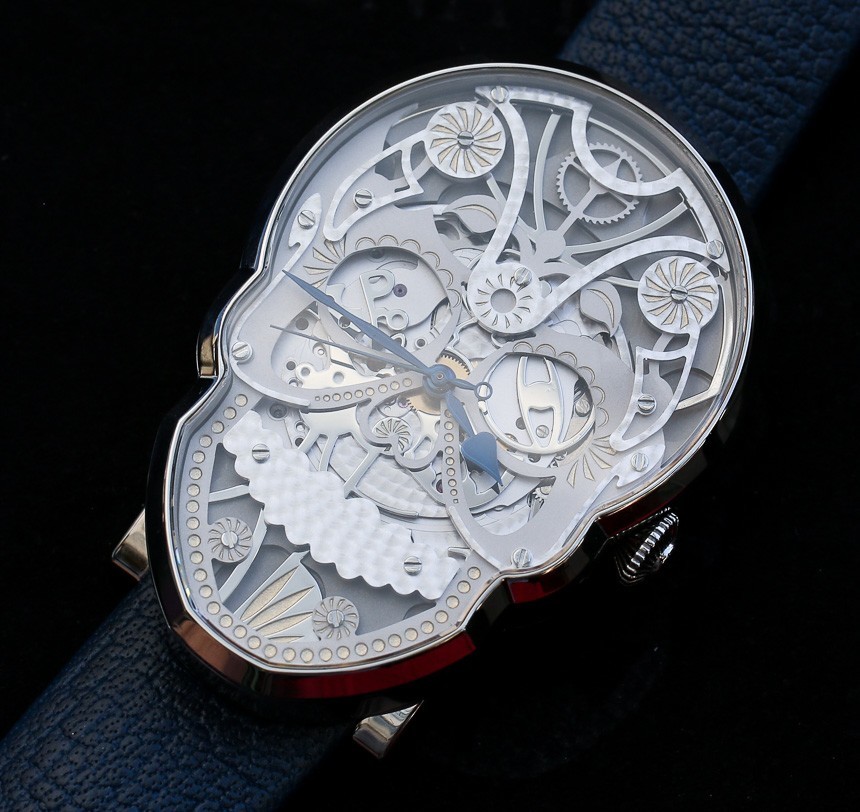 Almost three years after initially writing about her Memento Mori Skull watch, I got to meet designer Fiona Krüger in person to see the resulting timepieces first-hand. Her story is interesting, and those seeking to gain fame and fortune in the luxury industry can learn a lot from her process. While a student at the ECAL art school in Switzerland, she came up with the design for her Memento Mori watch. While she is not Mexican, she did live for a time in Mexico, and was inspired by the colorfully fun and clearly morbid aesthetic surrounding the Day of the Dead celebration. Mixing that with some elements of historic European watch and clock making, this unique skull-shaped wrist watch was born.

At first, it was just a school project, and something that had an unknown future when I wrote about it back in 2011 for the first time. We covered the watch because of the cool design, and genuine feeling of novelty. Fiona wanted to see if it is was feasible to produce a few to sell, and I encouraged her to do so. Apparently, the response to Krüger’s Memento Mori (Memento Morieris) Skull watch was good enough that she felt comfortable going into a small, limited production. It was not until mid 2014 that Fiona Kruger would have a limited edition Memento Mori Skull watch to offer (covered here). Now, it is just called the Fiona Krüger Skull watch, and each Fiona Krüger Skull timepiece right now is limited to 12 pieces, offering various differences when it comes to cases and colors. The good news is that there are even more versions in various stages of development. While she can’t claim that producing watches is her full-time work (right now), Fiona is certainly learning what it means to start an independent watch brand in our modern times. Fiona is young and obsessed with design in a way I could never be. She proudly carries with her a large sketch book full of drawings, clippings, and inspirations which illustrate the development of the Skull watch. According to Fiona, her studies at ECAL were specifically in the design and production of luxury items – and of course, it doesn’t surprise me that such areas of study are specified and offered in Switzerland. She mentioned that, on at least a few occasions, watch brands would work with the local Swiss design school to have students create designs and concepts for their brands – in some instances, that turns into business for them both. Likewise, given that Fiona created the Memento Mori Skull watch while at school, I think it is likely that ECAL has at least some minor stake in it.

Making a prototype watch isn’t easy, but harder is getting to the point of having production partners and suppliers which will take your timepiece from concept to reality. Fiona was perhaps lucky to be a part of an established design department at a well-respected school – a gateway to necessary contacts. Even then, it was through kindness and luck that she was able to get the right contacts necessary to make the Fiona Krüger Skull watches a reality. The truth is that, unless you have “an in” at many Swiss watch making suppliers, etc… their doors will be mostly closed to you. Fiona Krüger gave special thanks to Peter Speake-Marin. Now that some of the watches have been produced, things are going a bit more smoothly for Fiona, but there is a lot to consider such as use of new movements, what direction to go next, and keeping costs reasonable. At over $15,000 each, Fiona admits that while the quality and value of the Skull watches are on par with the price, she laments that her creation is something that most of her friends cannot afford. A deeper story I’d like to explore in the near future is that fact that many small, independent watchmakers don’t actually represent their own customers. While the products they create are certainly what they themselves want, they aren’t often the people who can afford them.

On her feminine wrist, the distinctive skull-shape of the watch is much more attractive than the concept might come across on paper. History isn’t exactly full of skull-shaped wrist watches, but I think Fiona Krüger made it work. While the current Fiona Krüger Skull watch is over 50mm long (not sure about width), Fiona is planning a smaller 42mm tall version as well, given that the reception from women has been very positive. I put it on and am startled by how comfortably it wears. The positioning of the lugs under the case as opposed to where it ends means that while it does sit high off the wrist, it does not feel at all awkward. Given the limited production of the Fiona Krüger Skull watches and the pretty decent suppliers she managed to work with, each is produced with the same treatment as many much more established luxury watches. So it doesn’t matter that Fiona Krüger isn’t a watchmaker (she never claimed to be one), you can still design a watch, and if you have the right connections, you can have them produced by some of the most talented people in Switzerland. Fiona appears to be genuinely thankful of the help she received in her efforts, but makes it clear that working with the Swiss is difficult for those who have evenly slightly “out of the box thinking” when it comes to design or manufacturing. There is a reason so many Swiss watches look the same; even if Swiss workmanship is excellent at producing particular items, the scope of their open-mindedness about what they will work on is often limited, warns Krüger (as well as a host of other people I’ve talked to about the same topic).

The Fiona Krüger Skull watch dial is made up of three layers to create the full stylized skull effect. Fiona designed the dial not only to embrace the thematic elements, but also to look like it is part of the movement. One of her goals is to design a movement whose bridges incorporate the design elements of the watch itself. For instance, she would like to do a version of the Fiona Krüger Skull watch with a skeletonzied movement that is the dial – rather than a dial meant to look like one. The layers of the dial are hand-polished, and hand-painted, where necessary. Legibility is OK, but I think it would be better if in the future she were able to incorporate hour markers into the design. Krüger’s sketch book is really impressive to flip through, while investigating the many inspirations that led to the exhaustive amounts of concept art. Seeing such documents from watch designs is rather rare, and that is a shame. By better understanding a designer’s inspirations, passions, and background, you can much more easily understand their art and creations. Without knowing about Fiona’s status as a professional artist, personal interests, places she grew up, and what she looked at in order to design her first watch, it would be impossible to fully appreciate the final result – whether or not you like it or would wear it. For me, there is something thrilling about someone showing you a small object that fits in your hand, and more or less expressing, “I just spent years of my life working on this, and now I’d like for it to help pay for my future.”

Fiona recalls the feedback she got after initially designing the Memento Mori Skull watch. Some good, and of course a lot bad. Being her first watch project, I don’t think she adequately knew whether or not it would be a commercial success, or even whether or not it was worth pursuing. I think enough positive feedback is what pushed Fiona to make the Memento Mori Skull watch a reality; a story that applies to many young designers with novel or “different” product ideas.