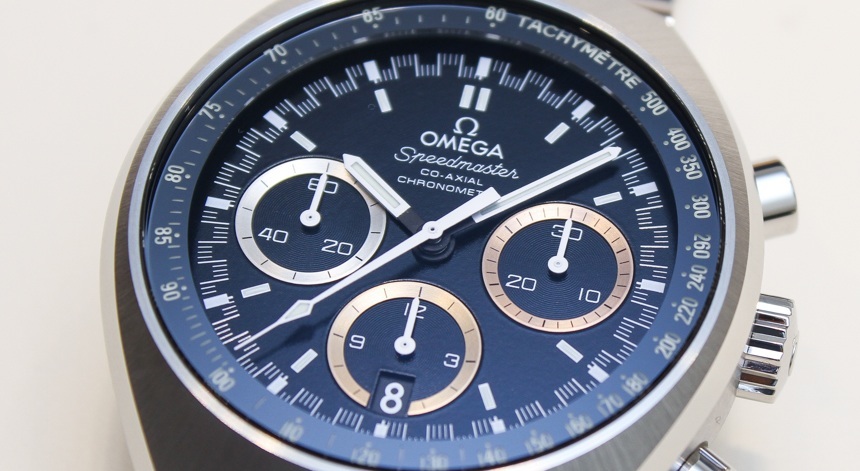 Among a wide range of impressive releases for Baselworld this year, Omega has announced another “new vintage” piece in the same ilk as last year’s Seamaster Bullhead. Announced a couple months ago, the new Omega Speedmaster Mark II is based on a model from 1969 and takes that successful tonneau Speedmaster design and updates the technology and details to suit Omega’s modern line-up. I’ll admit that I didn’t really get excited for the Omega Speedmaster Mark II when the press release landed in my inbox. It wasn’t that I felt it was bad, I just didn’t feel much for it at all and I had decided to take a closer look in person at Baselworld. Having now seen the Omega Speedmaster Mark II in the flesh, I can safely say that I was way off the mark with this new chronograph from Omega. It’s straight-up awesome.

With a total of three versions soon to be available, buyers will be able to choose between the super-retro and achingly cool grey and orange dial or a very Speedmaster-y black dial. The third version is a limited edition model made for the 2016 Summer Games in Rio. With a black dial sporting gold, silver and bronze chrono registers, the Rio LE is limited to 2016 pieces. Based on the vintage reference 145.014, the Omega Speedmaster Mark II is 42 mm wide and sports a chunky and thick steel case with brushed flanks and polished edges. The dial design is fairly self explanatory and offers the legibility and military format that we’ve come to expect from the Speedmaster line up. Of special note is the design of the tachymeter scale, which is rendered in sapphire and carries numerals that are clear. The sapphire scale sits on top of a Super-Luminova treated aluminum plate that allows the lume to shine through the transparent scale text. It basically works like a sandwich dial, but the scale is clear rather than being cut out. The effect is really cool and it’s one of very few Speedmasters with a lumed tachymeter scale.