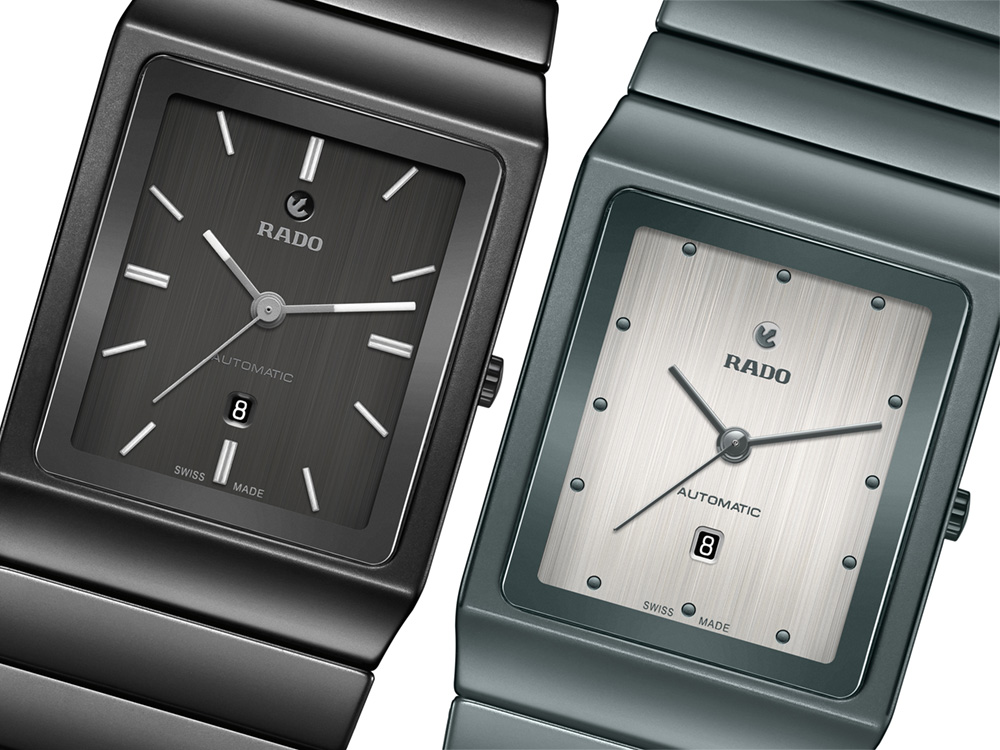 Last year, in 2016, Rado updated their minimalistic rectangular Ceramica watch with a totally redesigned collection by industrial designer Konstantin Grcic. A number of versions were included in the release, all very stylish-looking and powered by quartz movements – which perhaps left mechanical watch snobs who otherwise liked the design feeling as though they were strangely attracted to a “fashion watch.” For 2017, the newly designed Rado Ceramica, as all versions are apparently named, got some mechanical models. It is actually the first time for watches in the Ceramica family, which has been around for a while, to be powered by an automatic movement. This is going to be a polarizing watch as it relies heavily on aesthetics, which will always be subjective, but I think Rado got a lot of things right and is offering something pretty unique. While I like the case design itself, in my opinion, the first thing they got right is the ceramic case and bracelet’s matte finish, as many guys simply don’t want to wear a lot of glossy ceramic. With the vertically brushed dial, it appears that there is virtually no bling or sheen here, and that is a good thing. The lume on the dial and hands (on at least two of the models) as well as 50m of water resistance also help the Rado Ceramica feel more serious and robust – while hardly a dive watch, I wouldn’t have been surprised to see only 30m of water resistance for what is obviously not a sport watch. For a men’s watch, the automatic Rado Ceramica’s case measurements of 30mm wide by 41.7mm tall, with a thickness of 12.3mm, might sound diminutive but it is notoriously hard to balance the proportions of square and rectangular watches. For comparison, the Cartier Tank Solo XL (hands-on pictures here) is 31mm by 40.85mm by 7.65mm. The Rado Ceramica automatic is significantly thicker and about twice as thick as 2016’s quartz-powered Ceramica Konstantin Grcic watches. In the end, we will need to see the watches in person to determine how the dimensions work and how its matte black ceramic might diminish visual size on the wrist. As the technology has improved, ceramic watch cases have become one of the big trends across the industry. However, if one brand is historically associated with this more or less scratch-proof material, it is Rado, so it seems like they would be in a good place to capitalize on their “heritage,” cred, and the ceramic trend. Meanwhile, fellow Swatch Group brands have grabbed the spotlight with admittedly already popular models with new ceramic cases – the Omega Seamaster Planet Ocean (hands-on) or the Blancpain Fifty Fathoms Bathyscaphe Flyback Chronograph (hands-on), for instance – that may even be using technology developed by sister brand Rado. Finally, I think with watches like the Ceramica, and especially these automatic versions, Rado is doing more of what it should be and more to get our attention. I’ve focused mostly on the black version because I feel that it is the real winner, but there is a total of three automatic models in this release, and Rado is highlighting the limited-edition version. The limited edition in gray ceramic with a light-colored dial has unfortunately foregone the lumed hands and indices apparently in favor of aesthetic considerations. Here, “concave dots” function as the indices, and it appears to be priced more than the production models due primarily to its limited nature. The two non-limited models are black and gray ceramic with respectively matching dials (though we only have info on the black model and the limited model for now). Note the tiny swinging anchor logo that is found on many Rado watch dials. This doesn’t have any practical function but it provides some movement and interest on the dial, and it also seems to reference the watches’ mechanical nature because it is reminiscent of an automatic winding rotor. Powering the Rado Ceramica automatic watches is the ETA (also Swatch Group) 2671 movement. With a power reserve of 38 hours and operating at 4Hz, the ETA 2671 was undoubtedly chosen because it is smaller than many of the more familiar ETA movements and will fit in the Rado Ceramica’s narrow case. It’s slightly interesting because it’s not a very commonly seen movement, at least not in men’s watches – but for the Rado Ceramica you won’t be seeing it anyway because it unfortunately features a closed caseback, I believe (though we don’t have images of it now). The case design, in my opinion, is really cool and interesting with a modern look but one that fits in with Rado’s other somewhat ’80s-reminiscent collections. The aesthetics of the Rado Ceramica automatic watches are going to require certain tastes, personalities, or moods, but I think they will be very attractive for the right people and, now with automatic movements, more watch enthusiasts will be among them. USD price for the Rado Ceramica automatic watches will be $2,500 for the non-limited models, and $2,600 for the limited edition. rado.com