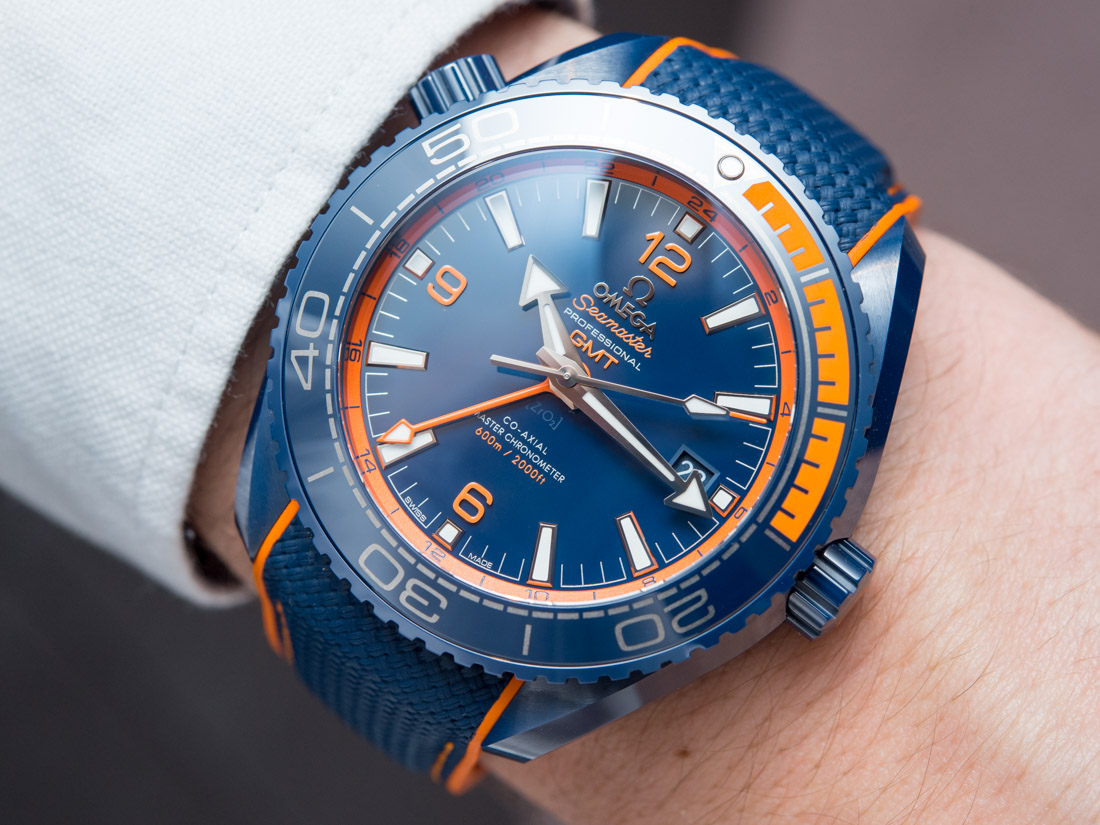 The Omega Seamaster Planet Ocean Big Blue Ceramic GMT may have one of the most descriptive product names out there – it’s a Planet Ocean that is indeed very big and very blue. And, in truth, it is also quite expensive. Let’s see where your money goes if you get one of these Big, Blue, Beautiful, Expensive things when they become available later in the year. 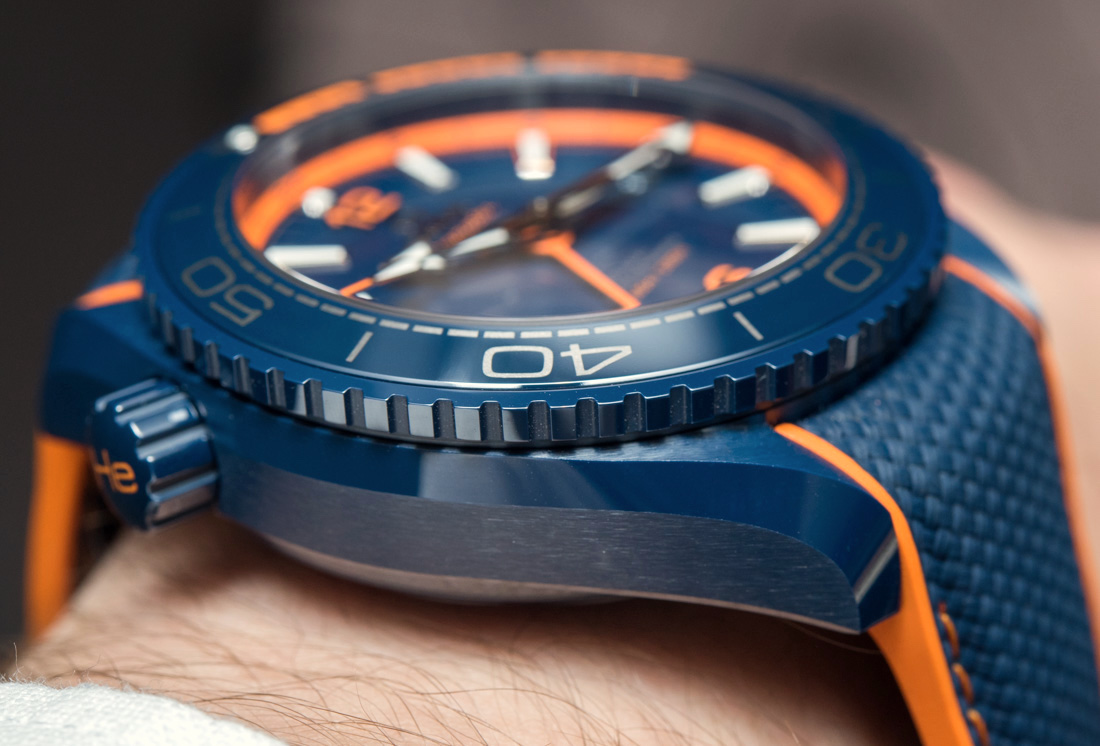 For lack of a better analogy, I like to look at the Omega Seamaster Planet Ocean Big Blue as a fully spec’ed-out Audi or BMW – it is based on a model range that you can enter at a much lower price point, but this particular specimen has all the latest tech both on the inside and out. While its $10k+ price point very clearly puts it up against some tough competition coming from all sorts of places, there is enough going on here to make me want to review the Seamaster Big Blue soon. 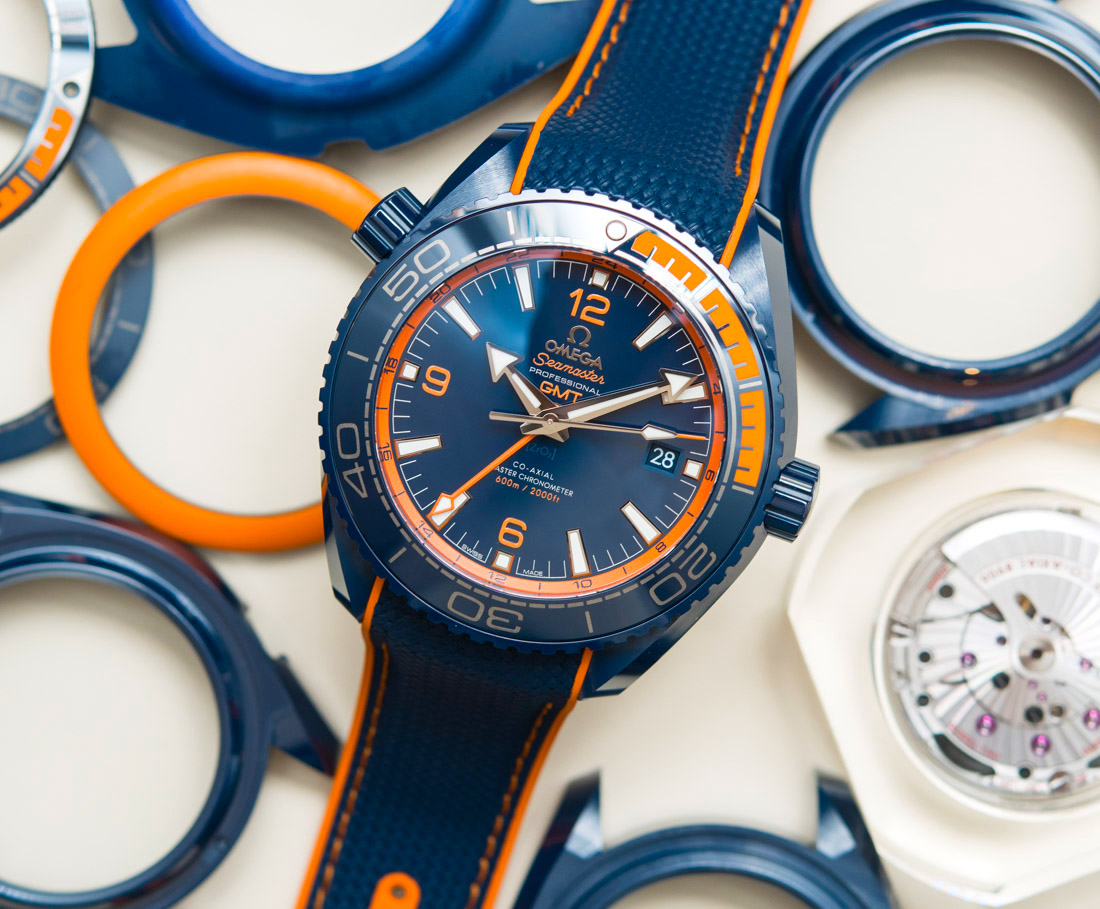 For me, the primary takeaway message I have from this watch after seeing it hands-on at Baselworld 2017 was something along the lines of “I have to see how this blue ceramic fairs in the real world” because, while I have worn ceramic watches before, how this Big Blue watch works on a day-to-day basis is something I want to see for myself. How lastingly interesting, comfortable, quality-exuding, and versatile it is in the mid- to long-run, we’ll only know when Omega starts rolling it out. For now, however, we’ll start on the outside and work our way inwards from there to understand what Omega’s latest and supposedly greatest advancements in case and movement manufacturing can offer. 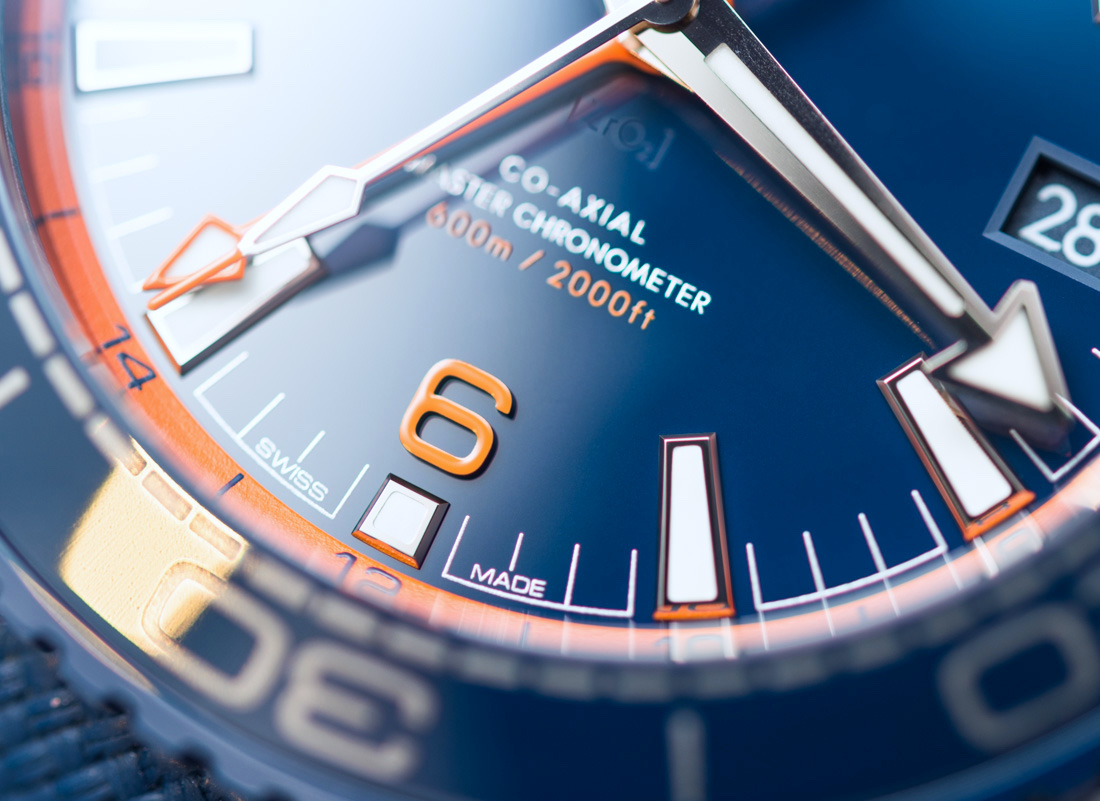 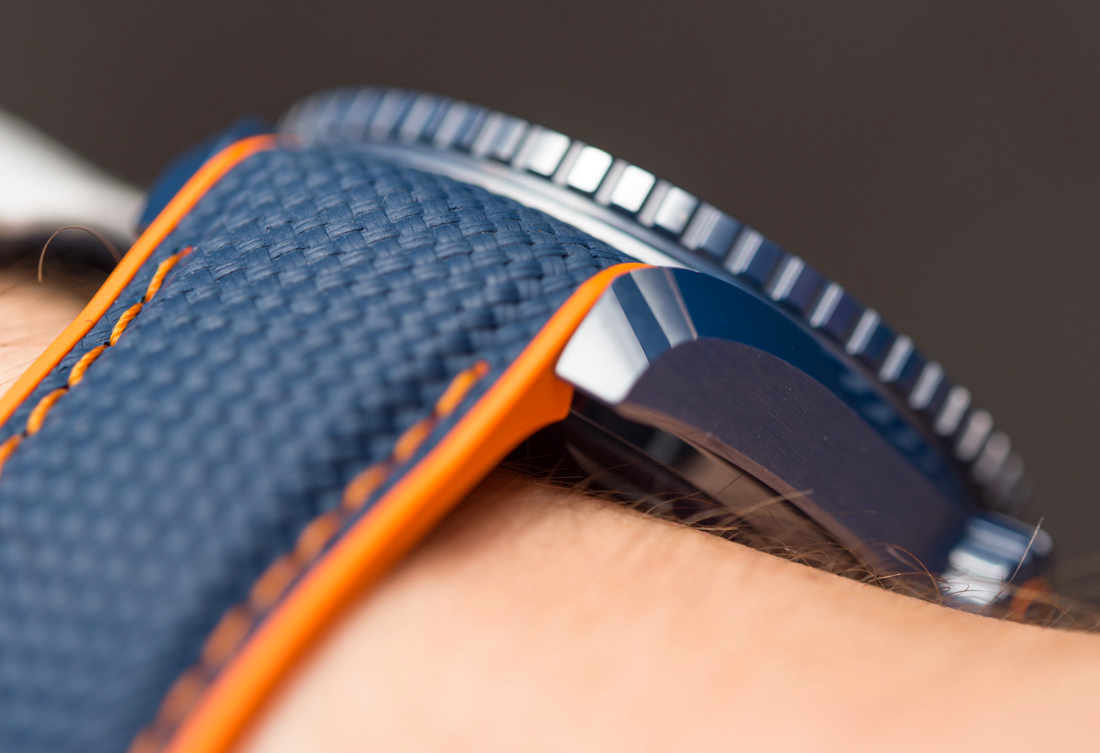 The most important thing to clarify about the Omega Seamaster Planet Ocean Big Blue Ceramic GMT is a certain dissonance between how it looks in images and how it actually is in the real world – you only need to lift it off the watch tray to see for yourself what I’m about to say. Because blue, especially such a saturated, deep blue, we scarcely see quality, durable materials take on, when seeing it in images alone (particularly in official images such as in our release article here) I found myself prone to associating it with a plasticky look and “feel” – though you really can’t make that conclusion from images alone.

That, however, couldn’t be further from the case. Omega watches are very far from being the lightest in the crowd, and the Big Blue is no exception to that rule, thanks to its massive, solid ceramic case and bezel and its also rather generously proportioned automatic movement. In the hand, even upon first impression, the Big Blue feels not only heavy, but also remarkably solid. 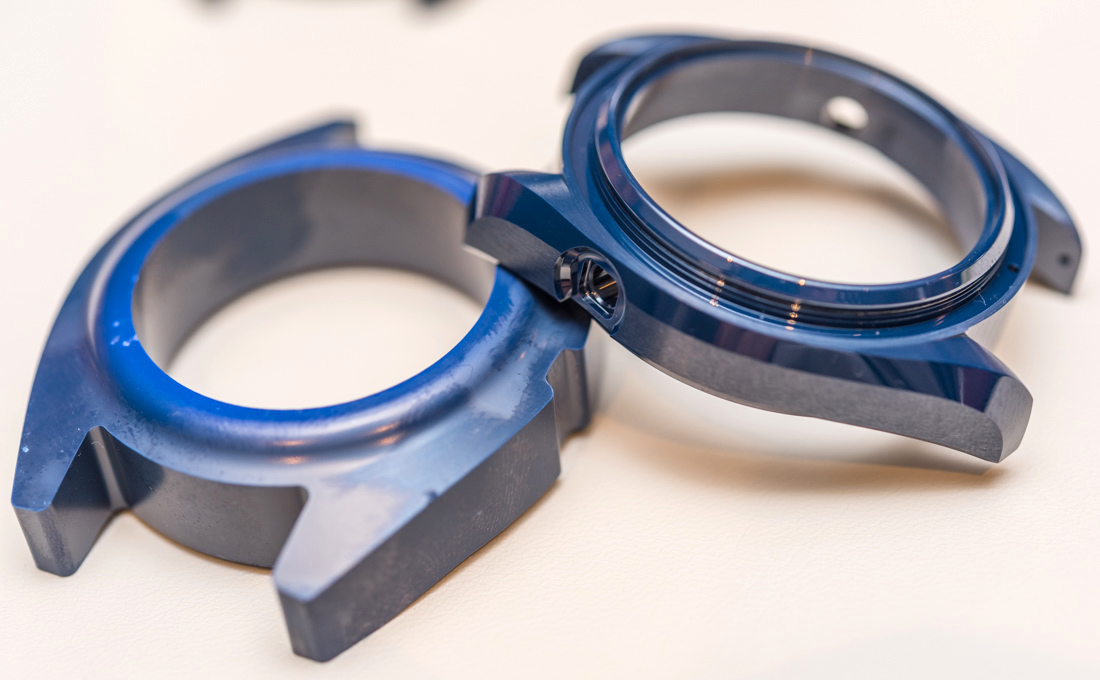 Omega did something very cool and brought along a five-piece puzzle to show how the case is crafted from a solid block of ceramic along with a number of other production pieces for the bezel and case-back. Unlike the Chanel J12 and nearly all other ceramic-cased watches, Omega’s ceramic-cased watches do not use a steel inner core with a thin and relatively brittle ceramic layer wrapped around it. Instead, the case is solid ceramic through and through.

It wouldn’t be surprising to learn the technology was coming from Swatch Group sister-brand and ceramic expert Rado, whose HyperChrome ceramic from about five years ago did away with the steel core thanks to its mold-injection ceramic-manufacturing technology. Not a broadly advertised connection, this one, but it would only make sense for Omega to harness the group’s technology and that, fortunately, is exactly what happened. 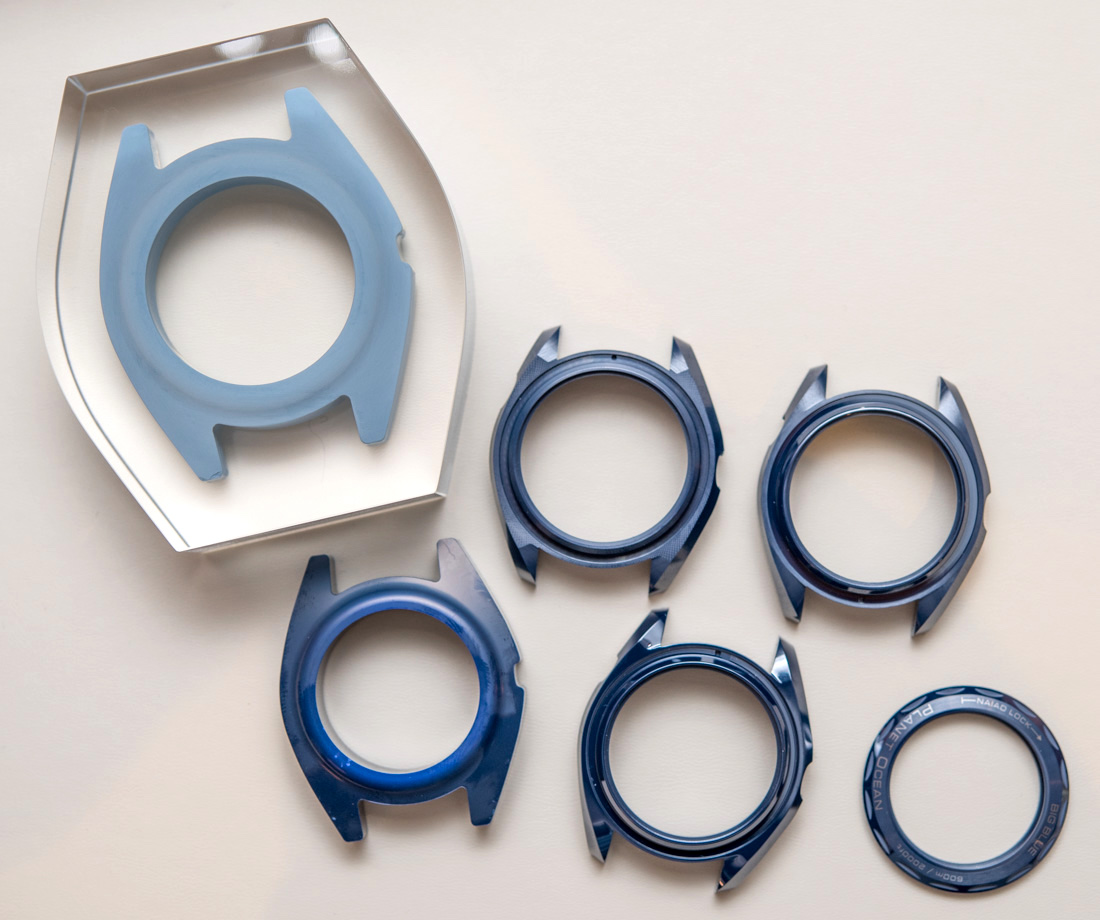 Both Rado’s HyperChrome and Omega’s ceramic manufacturing process begins with a mold into which “a special zirconium-based powder” is injected. That light blue, large piece you see wrapped in glass in the top left corner of the image above is how the case looks at that stage. It is rather accurately in the case’s final shape, already incorporating all openings for the bracelet, side inserts, as well as the crown and pushers (on applicable case designs). The injected zirconium oxide inside the mold is then subjected to an extremely high pressure of around 1,000 bar and then cooled down and removed from the mold. 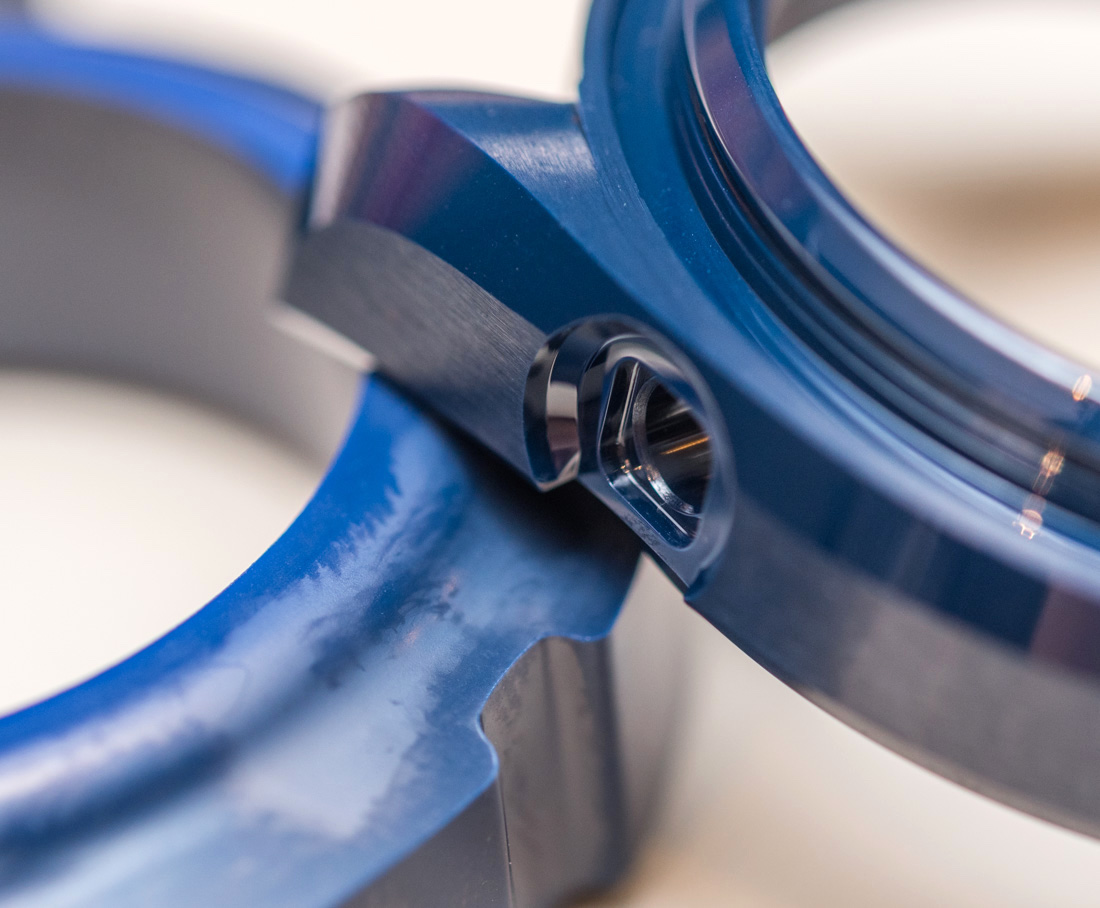 Compare: the rough mold after its first high-pressure treatment on the left and the sharply finished final case on the right.

At this point, it has shrunk considerably to the size you see in the lower left corner of the image above. Notice how deep blue it has become by the end of this process, indicating that the material itself is colored in its entire depth. It is here where we should note that colored ceramic (and especially in such massive and complex pieces) is extremely rare in watchmaking. 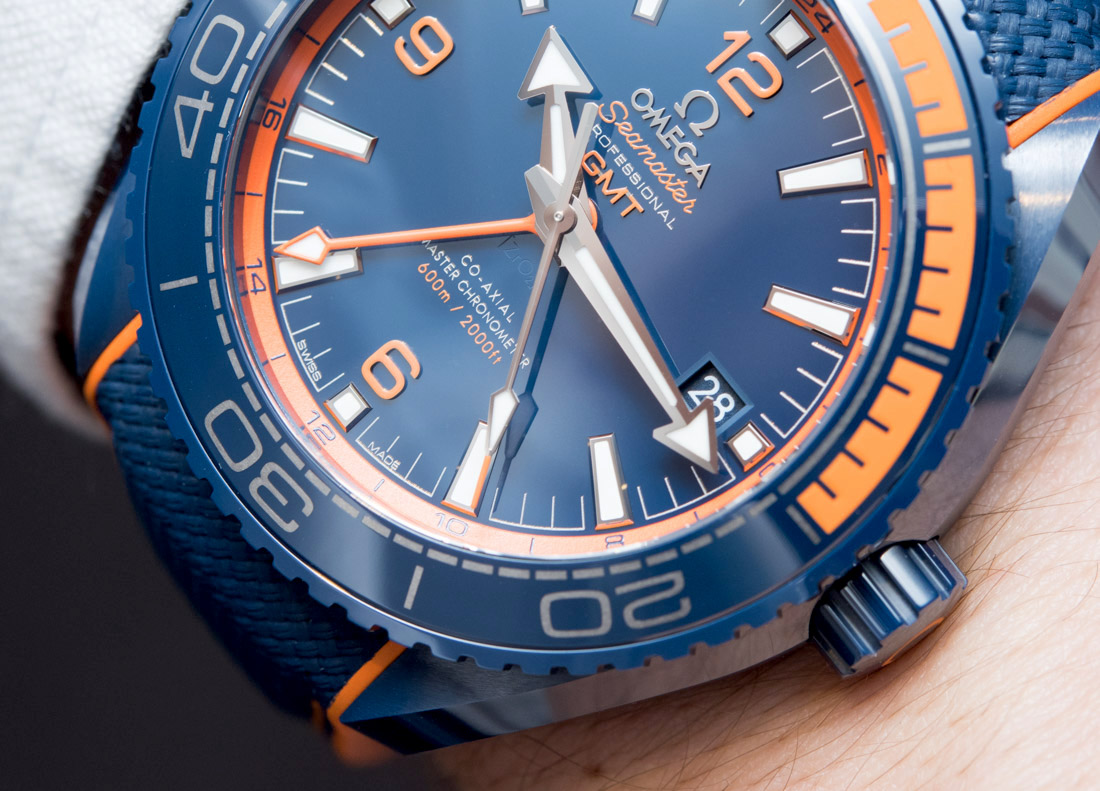 Monochrome ceramics have prevailed in white, black, or tones of grey because the moment you start adding pigments to ceramic and then exposing said pigments multiple times to immense heat (more on that in a bit), they react with the ceramic compound and result in discolorations and inconsistencies on the surface and inside the material itself. More often than not, this results in unacceptable numbers of rejects that are not salvageable but took a lot of effort to produce nevertheless. 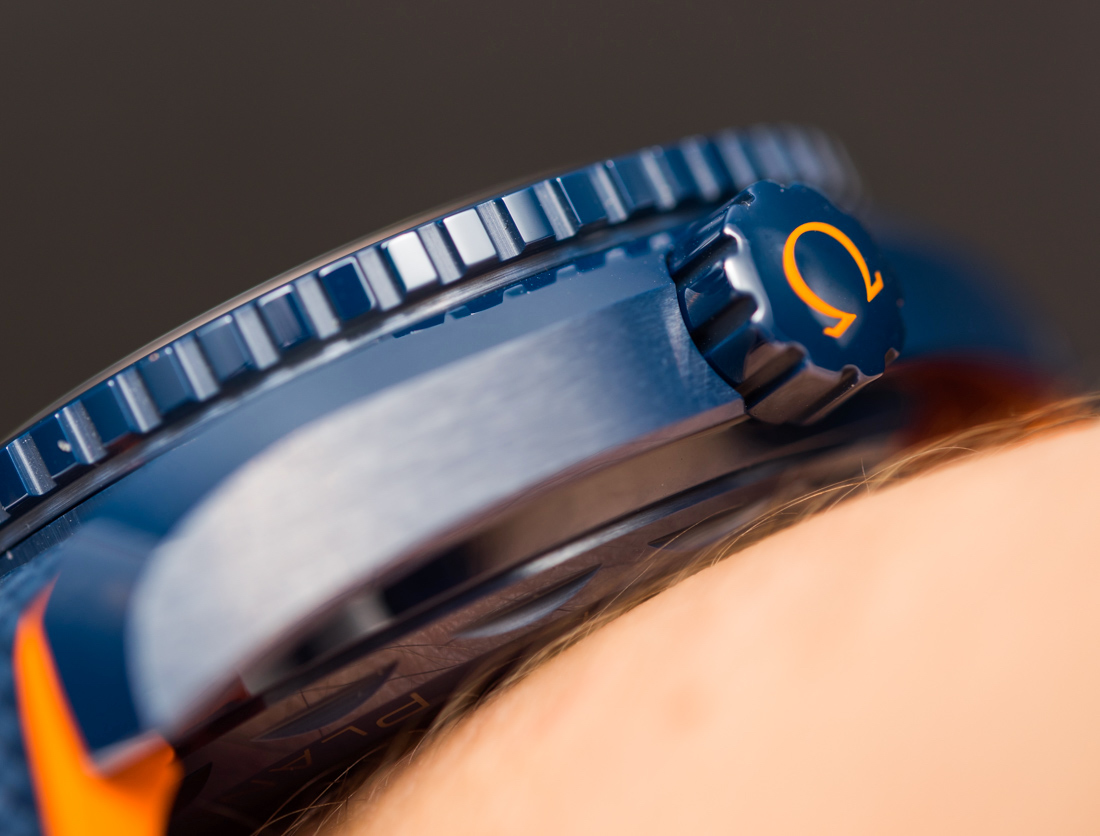 As such, the initial high-pressure treatment is followed by a sintering process at 1,450 degrees Celsius (2,642° F), further strengthening and shrinking the material that now even more closely resembles the final shape and is now ever harder and more scratch-resistant.

Omega explains: “for such a tough material, it then takes diamond tools to add the defining edges and grooves while also being lubricated and cooled by high-pressure oil solutions. A three-hour plasma treatment in a 20,000° C furnace then paves the way for precision laser-engraving.” 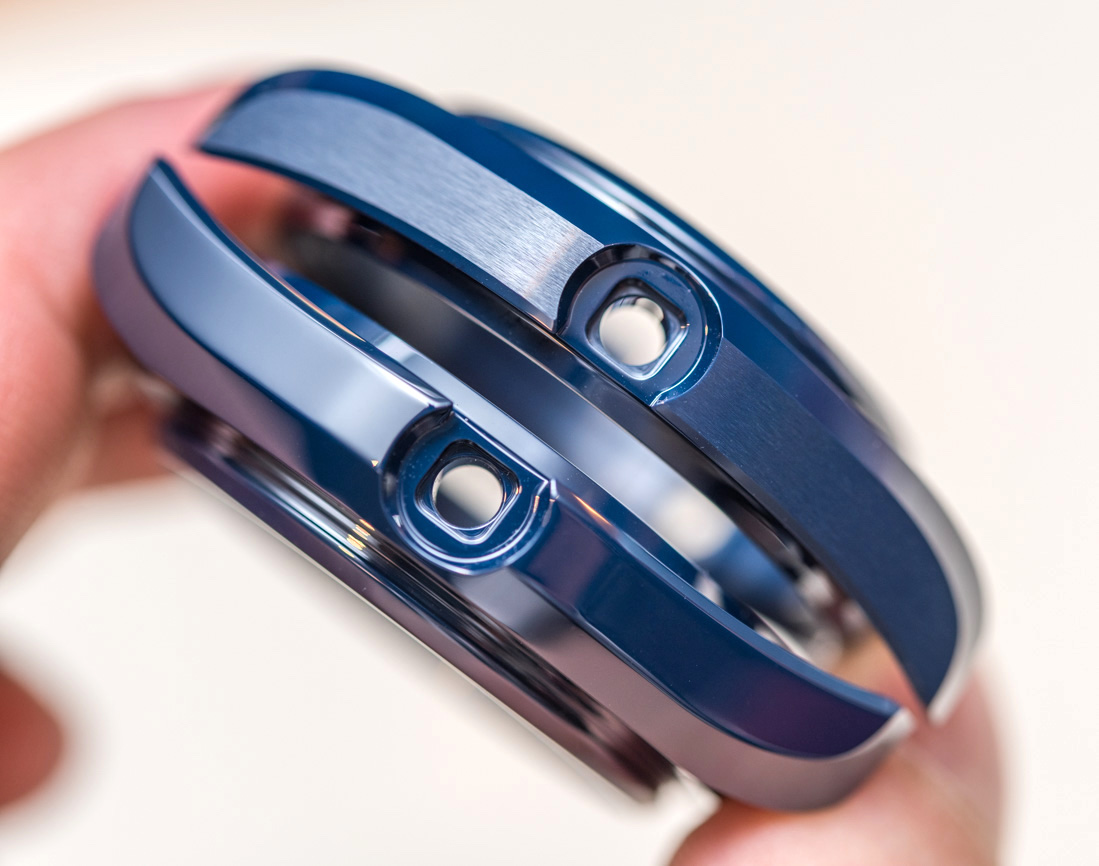 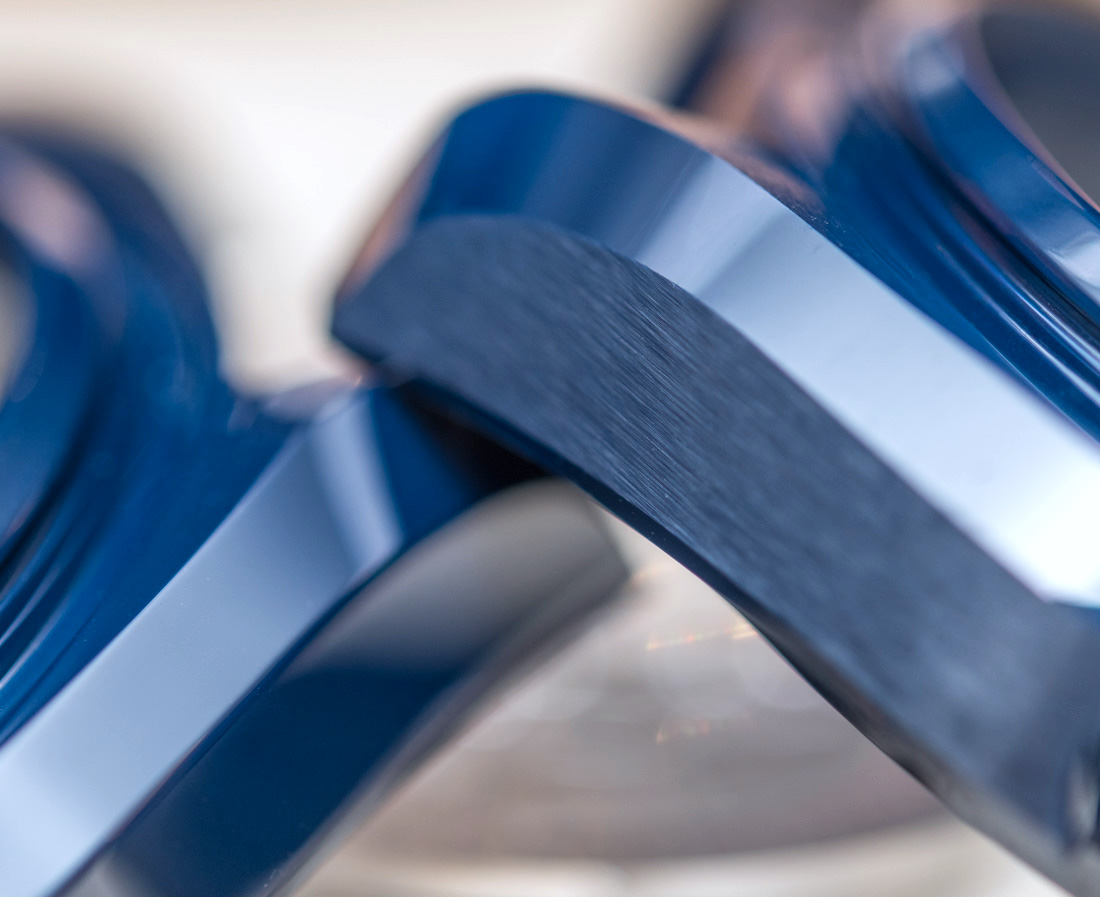 All this noted, what’s really super impressive is how Omega can finish ceramic which is about five times harder than steel, coming in at around 1,200 Hv on the Vickers scale against 316L and 904L steel’s 180-490 Hv (depending on compound, and heat- and surface treatments, the result varies quite a bit for stainless steel). What you see above is the final case on the left before finishing touches and, on the right, the finished product ready to be assembled.