For the 75th Anniversary of Batman, Swiss Romain Jerome has partnered with DC Comics to produce the Batman-DNA collection of limited edition watches. There is one version of the watch, and it is limited to just 75 pieces, with a Batman logo on the dial and case shaped with angles on the bezel to remind of the Batmobile. It might appear as though there are two versions, but it is just a “light and darkness shot” of the watch with and without the luminant glowing. This is the first watch relationship between Romain Jerome and DC Comics, but the concept is by no means a surprise, given Romain Jerome’s history of making limited edition watches in honor of pop culture icons.

Romain Jerome and Batman fans will love the new limited edition watch, but it won’t win any converts who are more interested in traditional horological fare. In many ways, the almost $20,000 timepiece is the ultimate Batman fan-boy wearable. It captures the dark, strong essence of the modern Batman characters nicely, and the design isn’t so over-the-top that the watch cannot be worn outside of comic book enthusiasts events and meetings. What I don’t understand is where the “DNA” part comes in. For the RJ Batman-DNA watch it does not appear as though the watch contains any metal or other “DNA” from anything related to Batman. No doubt Romain Jerome tried to do so though. I gather that they tried to get some metal pieces from one of the Batmobile movie props to include in the set of limited edition watches. The Romain Jerome Batman-DNA watches are 46mm wide, in PVD black-coated steel cases. The rear of the watch contains a Batman “medallion” while the face of the watch has the Batman logo over a neat “broken tile style” face design. Compare the intricate design with something like the Memorigin Batman The Dark Knight Rises Tourbillon watch from a few years ago. Other high-end companies to recently produce Batman-themed watches include Italian writing instrument and watch maker Montegrappa.

Inside the Romain Jerome Batman-DNA watch is a base Swiss automatic movement and attached to the cases is a black hornback crocodile strap. The dial of the watch is all black, but the luminant glows blue. The dial shots here are a “day view” as well as “night view” with “blue emission” SuperLumiNova luminant glowing. Limited to 75 pieces, the Romain Jerome Batman-DNA ref. RJ.T.AU.WB.001.01 watch is priced at $18,500. romainjerome.ch 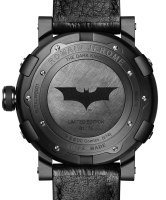 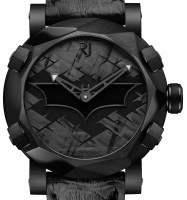 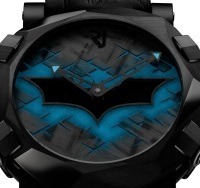