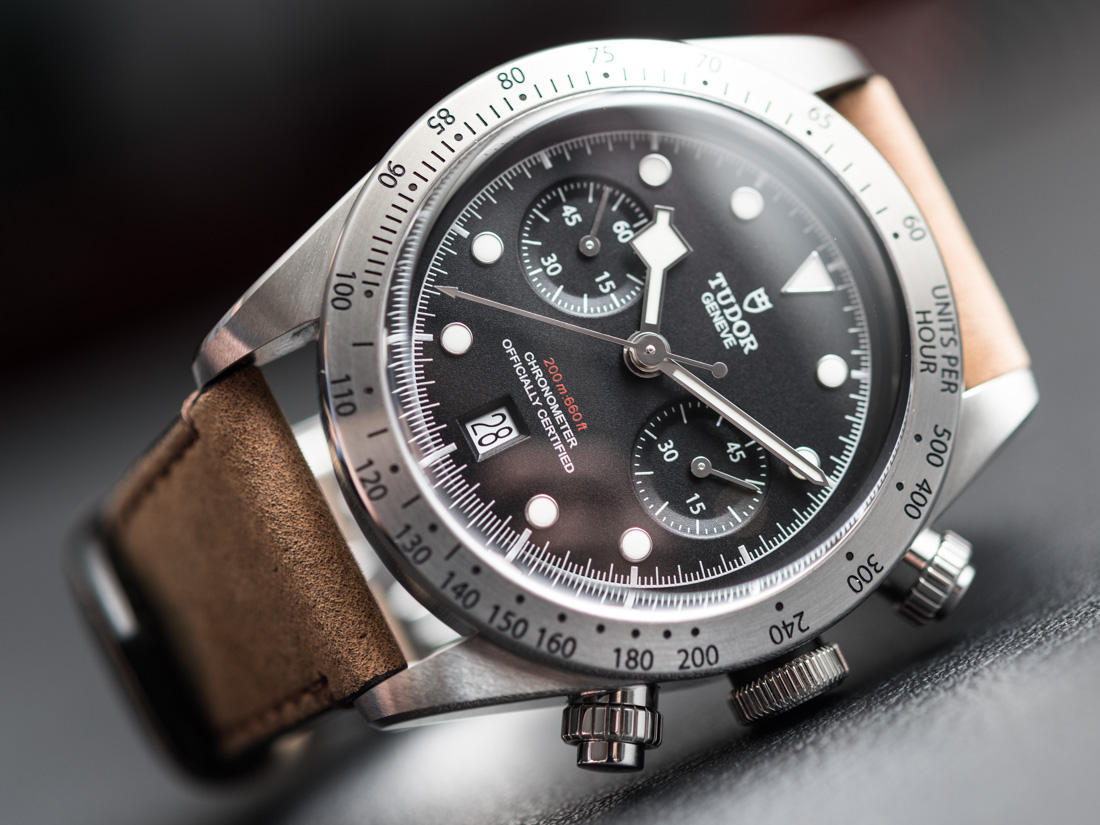 We looked forward to seeing new iterations of Tudor‘s highly successful Heritage Black Bay line at Baselworld 2017 – but this is something that we didn’t expect. A new chronograph watch with an “outside group movement,” it is officially called the Tudor Heritage Black Bay Chrono. In short, its surprising combination of typical chronograph and dive watch design elements powered by a new-for-the-brand chronograph movement leaves us with a lot to discuss. With the Heritage Black Bay Chronograph, Tudor has added a new and, again, sort of unexpected element by turning a full-on dive watch into a “diver chronograph” – a very sensitive, complicated combination that we have seen both work well and not work well in the past. A quick rundown of the mixed elements in this watch are as follows: the tachymeter scale, two sub-dials at 3 and 9 o’clock, central seconds hand and two screw-down pushers for the chronograph; a highly legible dial with large and bold indices and hands, the red “meters first” text and the so-called “big crown” for the diver. Tudor made a risky move by merging all these traits to pretty much completely remove the Heritage Black Bay from its comfort zone of being a clean-looking, vintage-inspired dive watch and turn it into what we could best categorize as a diver and/or sporty chronograph. The boldness of the move comes in how watch enthusiasts (many of whom are Tudor fans and customers) often tend to prefer single-purpose designs and purpose-built products to feature-laden and multi-purpose ones as the former tend to age and look better and also work with a wider range of situations and attire. Tudor thus far has pretty much excelled at nailing this “purpose built” ethos throughout its Heritage Black Bay, Pelagos (reviewed here), and even their Heritage Chrono (reviewed here) lines. Now, the Tudor Heritage Black Bay Chrono is the first to really go in a totally different direction and blend two into one… Which begs the question, can it win the hearts of both Black Bay and Heritage Chrono enthusiasts, find a new customer base, or suffer from what some do-it-all products do and fall to the floor between two chairs? In steel and at 41mm wide, it is as wearable and comfortable as any Black Bay before, and the leather straps are especially good this time around, though we are still not fans of the woven straps. There also is a riveted bracelet that we saw debut last year when the Heritage Black Bay received its update from an ETA movement to Tudor’s in-house caliber. Wearability, therefore, is still great and the sizing remains timeless – if you want a larger Black Bay you’ll have to go with the bronze iteration. Water-resistance is rated at 200 meters (as is noted on the dial with a vintage-watch-enthusiast-enticing red lettering) thanks to the screw-down crown and pushers. The Tudor Heritage Black Bay Chrono debuts the brand’s new chronograph caliber MT5813, a column-wheel, vertical clutch and silicon balance spring-equipped, COSC chronometer-certified caliber. Serving as its base is the Breitling Caliber B01, Breitling’s flagship chronograph movement and, in fact, the Tudor Caliber MT5813 is manufactured by Breitling but updated with Tudor’s proprietary adjustable moment of inertia balance wheel, hairspring, and finishes. Though the proprietary movement is manufactured by Breitling, the solid case-back of the Black Bay Chrono does say Calibre Manufacture twice on it. In return, Breitling will receive Tudor’s MT5612 calibre (a three-hand with date) and use it as their Breitling B20 (as in the new Superocean Heritage II). So yes, Tudor and Breitling are sharing resources in what the brands refer to as a “complimentary partnership” of offering services to one another – an intelligent move considering both the history and present state of the watch industry. Power reserve is an impressive 70 hours and operating frequency is an expected 4Hz. Indications include hours and minutes via the typical Black Bay handset, two sub-dials with running seconds on the left and a 45-minute counter on the right and, new for the Black Bay, a white date at six. Legibility overall is good, with only the curved crystal’s occasional glare and the large snowflake hand covering most of a chronograph sub-dial hindering it. The interesting, subtle texture of the dial helped highlight the shiny hands more, though black dials will always be outperformed by brighter ones when it comes to legibility. The date window and tachymeter scale are two design elements that frequently cause controversy in modern watchmaking and this is especially true when you think about the Black Bay’s successful and well-loved clean/undisturbed lines. The date at six o’clock makes for a balanced and symmetrical look but the black on white text, and the square cut-out against the round indices makes it stand out more than would arguably be ideal.