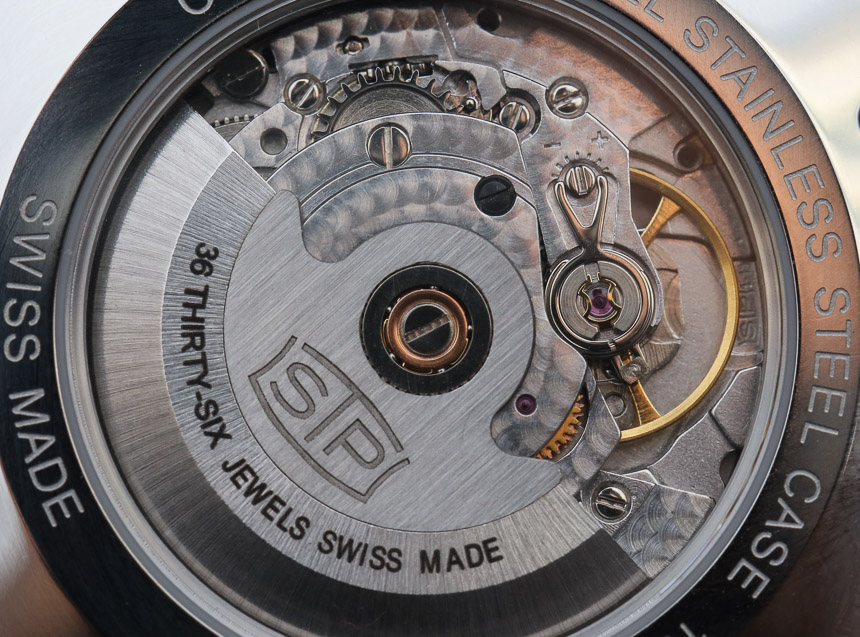 STP stands for “Swiss Technology Production,” and it is the Fossil Group’s secret weapon to winning the mechanical watch market game. Opened in around 2008 and wholly owned by the Fossil Group, STP produces mechanical movements for both Fossil watches as well as a host of undisclosed third-party manufacturers. In that way, STP is a little bit ETA (supplying its group with movements) and also a little bit Sellita (selling movements to third-party companies). I’ve been excited to visit Fossil’s secret watch manufacture ever since I learned about it when checking out the new generation of “Heritage” watches from Zodiac. Watches I reviewed such as the Zodiac Astrographic, the Sea Wolf, and the Super Sea Wolf each contain the caliber STP1-11 automatic mechanical movement which is the company’s main movement base. The STP1-11 also happened to be engineered to fit anywhere an ETA 2824-2 would. In that sense, the STP1-11 is a 2824 clone and exists as an alternative to the Sellita SW200. With that said, the STP1-11 is more than just another 2824 clone, but alone that would be enough to make it noteworthy. Without backing from major groups such as TAG Heuer, Sellita would have never been able to get off the ground and produce an ETA 2824 competitor that was competitively priced. Likewise, STP benefits from its Fossil Group ownership, which has its sights set on the international market for mechanical watches in addition to the fashion watch market (that it clearly already owns). Serious watch enthusiasts may pay little attention to many lower-priced quartz products the group makes such as Fossil watches, Emporio Armani, Burberry, and Michael Kors, but together these products earn the company the resources necessary to take on the landed aristocracy of the Swiss watch movement industry. Fossil just opened up a new major office complex in Basel, Switzerland, steps away from the convention center where the Baselworld watch & jewelry trade show takes place each year. Actually, Fossil has had its Swiss HQ in Basel for a long time, but previously rented out office space from a Nestle building. The new Fossil watches headquarters is impressive, with an open showroom view that marks a new visual strategy for the typically closed-door atmosphere of most Swiss watch brands. About an hour away from Basel in Biel is the Antima office which is more or less a design studio where the Fossil group’s “AAA products” are imagined, designed, and industrialized. Across the street from where Rolex makes its watch movements, Antima is an uncharacteristically American-style office in the heart of Swiss watch making country. Not only are the Group’s most complex and best watches designed here, but many of them are also assembled here. This includes Zodiac products as well as the Swiss-Made collections from other brands such as Fossil and Emporio Armani. Antima is a special place to go for anyone fascinated by watch case, dial, and bracelet design – and many of the watches created there include movements also produced by the Fossil Group. So with that said, let’s head over to the STP factory which is a few hours south of Basel near Lugano, the epitome of “Swiss discreet.” There is barely a sign outside with the STP name, and most people visit the area for the lunch cafe which has much more conspicuous signage. Inside and up to the second floor of the building, you get a glimpse into one of the clearly more advanced mechanical watch factories in Switzerland. STP claims that it was the first company to employ robotic automation to assist human labor in the production of watch movements. STP benefits from American owners and Swiss operators who combine the best of their talents to ensure efficiency, quality, and of course, productivity. STP does not have satellite centers where the “dirty work” is done, and all the assembly happens right there at the facility. Even though they aren’t near their production goals (meaning that they want to increase average daily production volumes), the company is still able to produce 600 to 1,300 watch movements per day depending on the specific movement that they are currently working on. STP is a movement assembly location, but the Fossil Group also produces many of the movement components in another factory also in Switzerland. Most of the components in STP movements are produced by the group, but they also rely on a series of regional watch industry suppliers who together make the bridges, springs, gears, wheels, jewels, and other materials that go into the production of a modern mechanical watch movement.

With that said, STP not only produced a “Swiss Made” movement by current standards, but also movements that will comply with the more rigorous “Swiss Made” standards that will take effect in 2017. Watch movement assembly and watch movement part production are two totally separate fluencies, and it takes companies years to master them both. There are just too many good suppliers in Switzerland to ignore their expertise, and going along with tradition, the Swiss watch industry is about companies working with other local companies, and not total vertical integration as is more common in countries such as Japan. STP’s volume product is the STP1-11 automatic movement which is an 11.5-ligne-wide (25.94mm) caliber that operates at 4Hz with a power reserve of 44 hours. The base movement comes standard with perlage polishing and STP prides itself on being able to offer as much customization as possible for its customers. An example includes the date wheel. ETA and Sellita seem to more or less only offer black or white date wheels, while STP is happy to work with its two date wheel suppliers to find the right color and font options that its customers (and Fossil watches) want. This adds further value to their finished product, and also helps address one of the bigger issues timepiece enthusiasts complain about, which is how date windows and indicators are designed on watch faces.