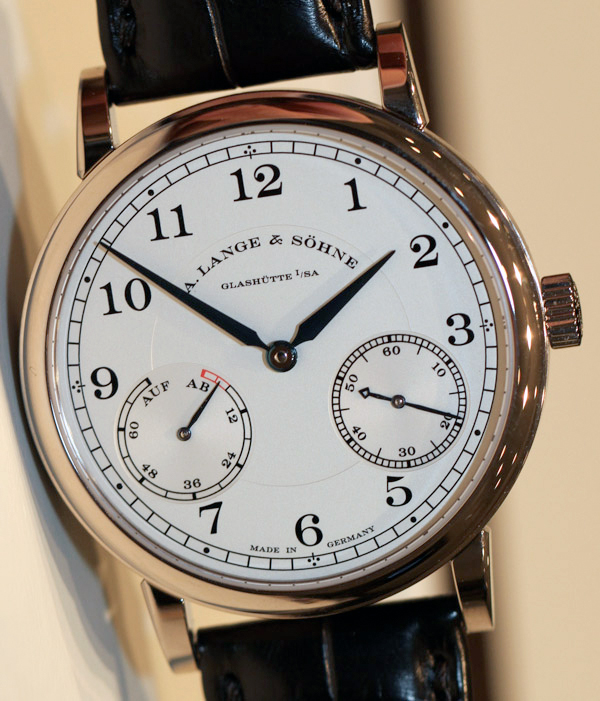 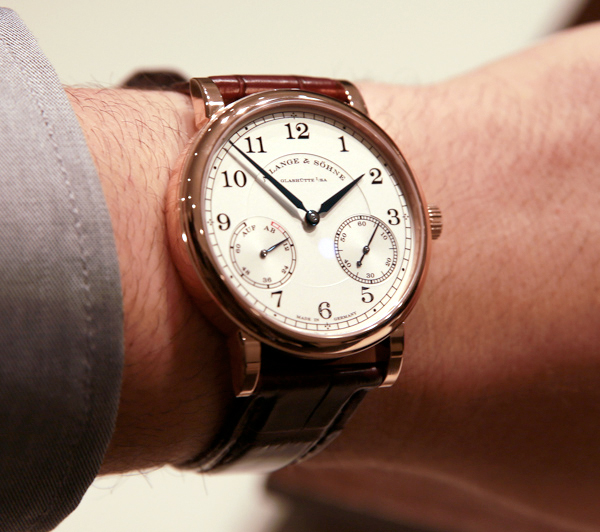 If there was such a thing as a “pedestrian watch” at A. Lange & Sohne then it would surely be one of their “more basic” watches priced under $50,000 like this 1815 Up/Down. Anything over that simply could not be considered “ordinary.” There of course is jest in my words as A. Lange & Sonhe is among the most exclusive high-end brands in the world that given their volume (about 5,000 or less watches a year) produce the nicest movements around. Turn over one of their watches – ideally a chronograph, and you’ll see what the fuss is all about.

In the same year A. Lange & Sohne released a new version of their 1815 power reserve watch, they released the most complicated version of the 1815 yet with the 1815 Rattrapante Perpetual Calendar watch. The 1815 collection is among my favorites, especially since Lange has been increasing their size to meet up with Western demand. The simple dial with its proper sized hands and Arabic numerals offer a precise, calm sense of legibility. This 1815 Up/Down is a new version of an older watch. Rather than produce a lot of new pieces, Lange is feeling rather comfortable with their existing collection and offering new or updated versions of popular ones from the past. 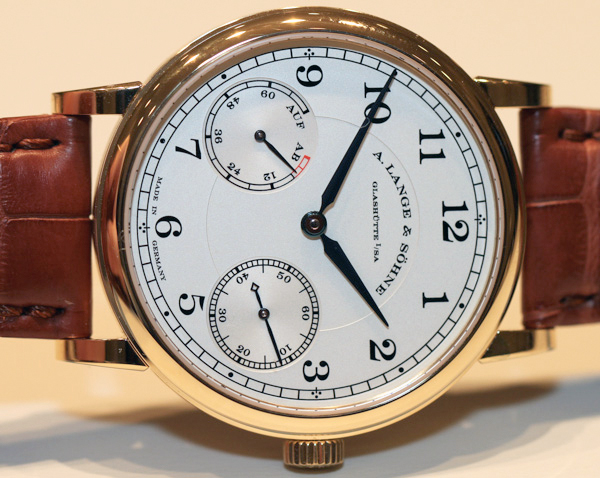 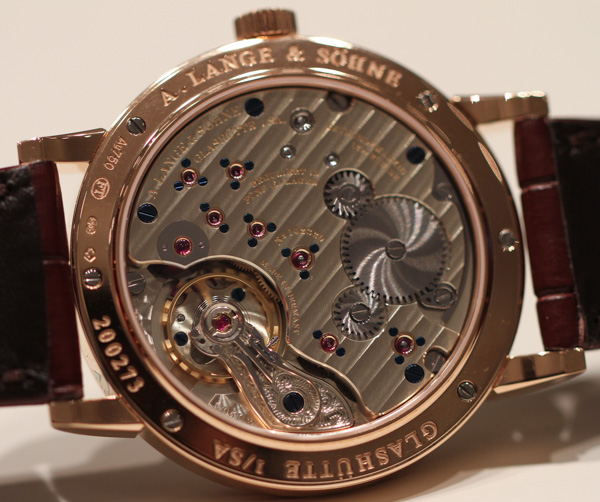 Before it was called the 1815 Up/Down, it was called the 1815 Up and Down, or rather just the 1815 Up/Down. At least with the new version of the Datograph, A. Lange & Sohne offered a new name. What? No “Grande” to add to title? That former model (ref. 221.032) was just shy of 36mm wide – making it femme or kid-sized by today’s typical standards. The new 1815 Up/Down is 39mm wide, and a slim 8.9mm thick. While this is still a smaller watch, it is certainly appropriate for the modern man. I’d wear it with pride for sure. The new and old version of the 1815 with the power reserve indicator and subsidiary seconds are very similar from a design perspective, but the new version does have a hint of red color in the power reserve indicator.

What I like about the design is two things. First, it is very legible and useful. The hands are the right size and the numerals are crisp and easy to see. The dial is also visually balanced offering the type of conservative Germanic design and detail that you pay the big bucks for. The second reason is that this is about as simple a watch as I would like to get that contains a manually wound movement. A. Lange & Sohne automatic watches are getting more common but they are still rare. That means that most of their watches are manually wound, and when you have to manually wind a watch I prefer a power reserve indicator to tell you when. For me that is an almost essential complication in a watch like this. The 1815 Up/Down offers this in a simple and minimalistic manner that is also very attractive. 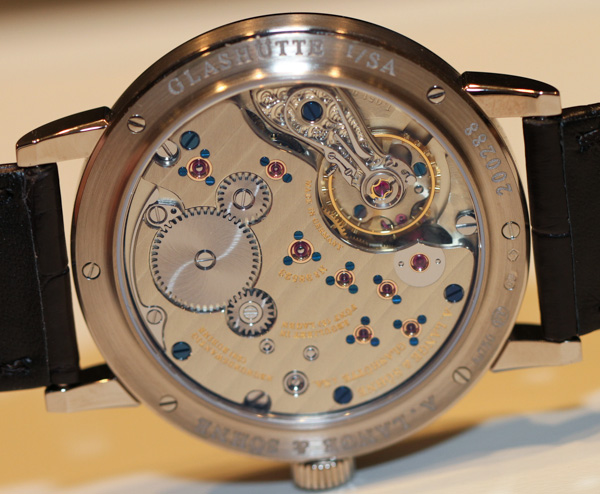 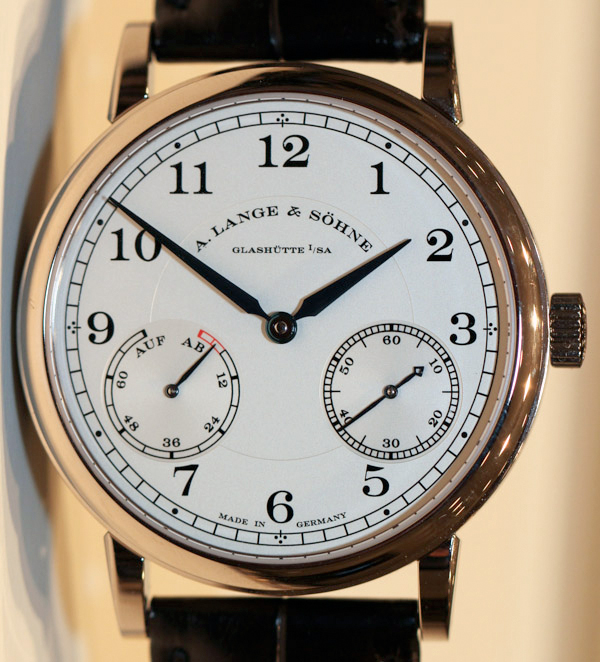 2013 sees three versions of the 1815 Up/Down. You can get the watch in 18k pink gold (ref. 234.032), 18k yellow gold (ref. 234.021), and 18k white gold (ref. 234.026). Each has blued-steel hands and solid silver dial. I really like how Lange tends to order their gold cases polished. There is a sort of antique quality to it. Rather than the perfect mirror polish of many gold watch surfaces, these have the finish of silver tabletop items that a maid has been hand polishing for years. The middle of the case is further brushed in order to prevent the case from looking too ordinary. Subtle styling on the lugs helps them flare with grace.

The remarkably balanced dial is so easy on the eyes it makes you wonder why there aren’t 1000 copycats. It is quite fantastic and offers a sort of unrivaled vintage looking instrumentality which feels more suited to gadget loving men than the usually stark and simple dials of most tuxedo or dress watches. Turn the 1815 Up/Down over and you’ll get the typical Lange treat – a pleasant unhindered view of the in-house made mechanical movement (with hand-engraved balance cock!). 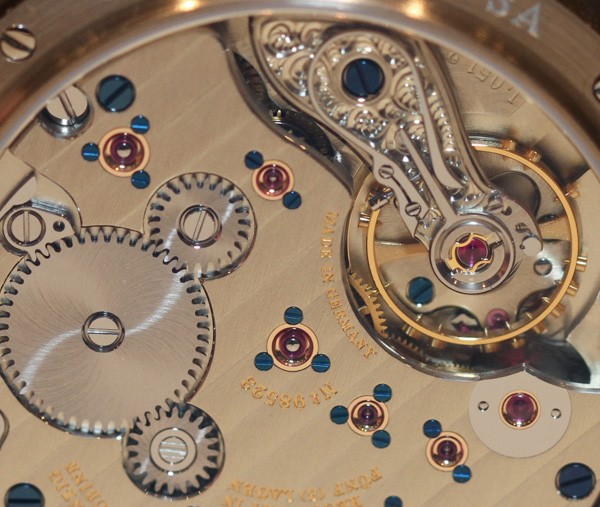 Mechanically, the older and newer 1815 Up/Down watches are totally different. The movements are totally distinct with the new model featuring the predictably beautiful A. Lange & Sohne produced caliber L051.2 movement. Compared to the older L942.1 movement of the previous model, the L051.2 has a 72 hour power reserve running at 21,600. The amplitude is the same, but the power reserve is longer. The movement architecture also features a visible wheel train which you can see turning as you wind the crown. The visible top-mounted great train is merely a way to offer a more dramatic view of the movement, which was a bit stark given the typical Germanic 3/4 plate architecture. I still can’t get enough of that color mixture when you combine German silver, blue-steel screws, gold chatons, and red synthetic rubies. It all just goes together so nicely in combination of the copious amounts of hand decoration.

With the hand-decorated and engraved elements along with features such as the free-spring balance wheel, you have a wonderful traditional movement with all the beauty and allure that horophiles seek out. If you are the kind of person who can see owning several A. Lange & Sohne watches, the new 39mm 1815 Up/Down watch is a perfect daily wear. Acceptably priced at $27,400 – $28,600 depending on the case material. alange-soehne.com