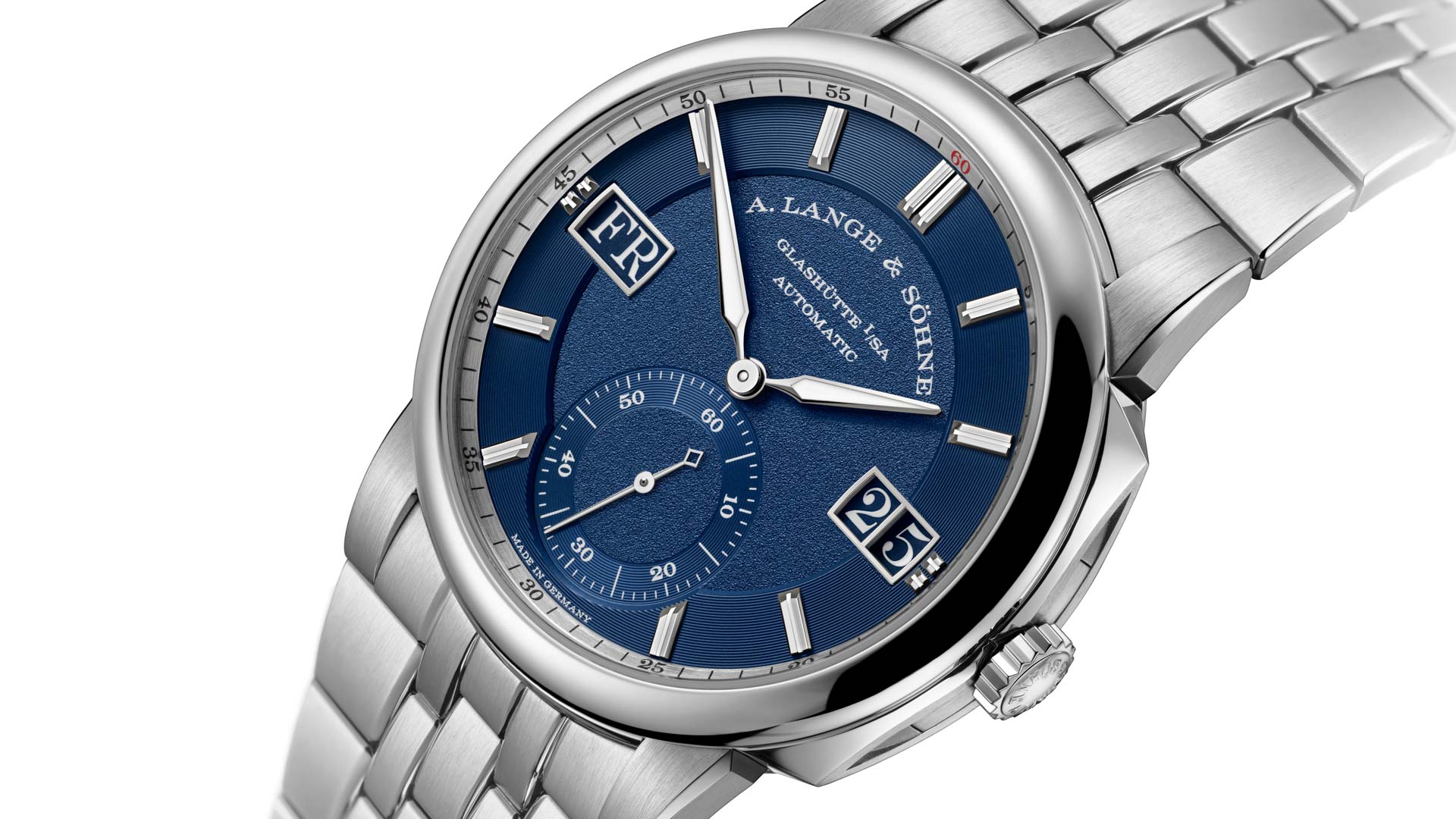 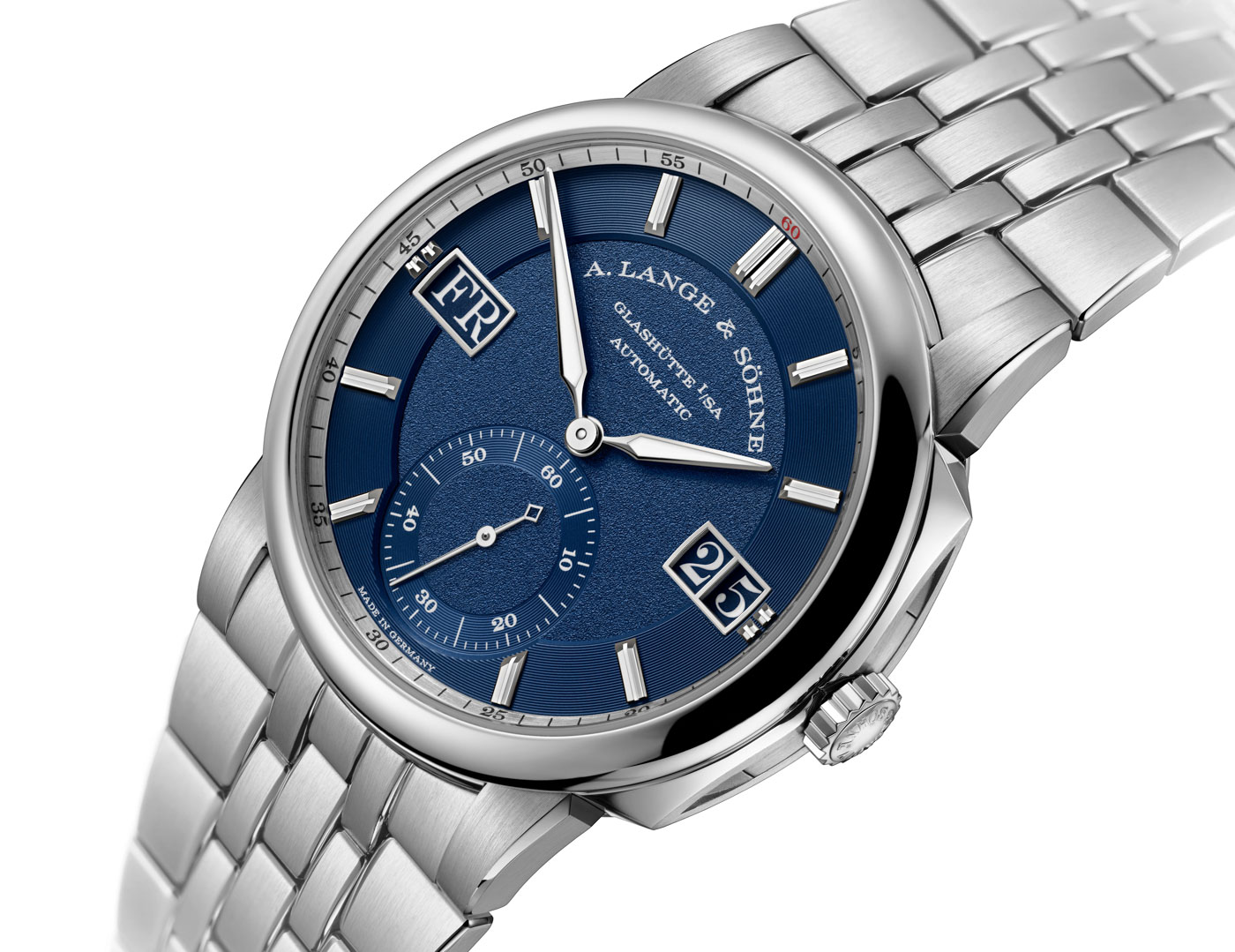 After days of strategic teasing on social media, today Lange revealed its first-ever steel luxury sports watch with the A. Lange & Söhne Odysseus. Lining up for a fat slice of this highly lucrative and equally populated market segment would be no news in itself — but the fact that it is Lange we are talking about, the brand that has never serially produced a steel watch before, stirs things up quite a bit. Combine that with a decidedly big departure from the company’s established design DNA, and there suddenly is a lot to take in. Let’s see what the Lange way of high-end watchmaking is good for when it’s focused on the creation of a luxury sports watch. 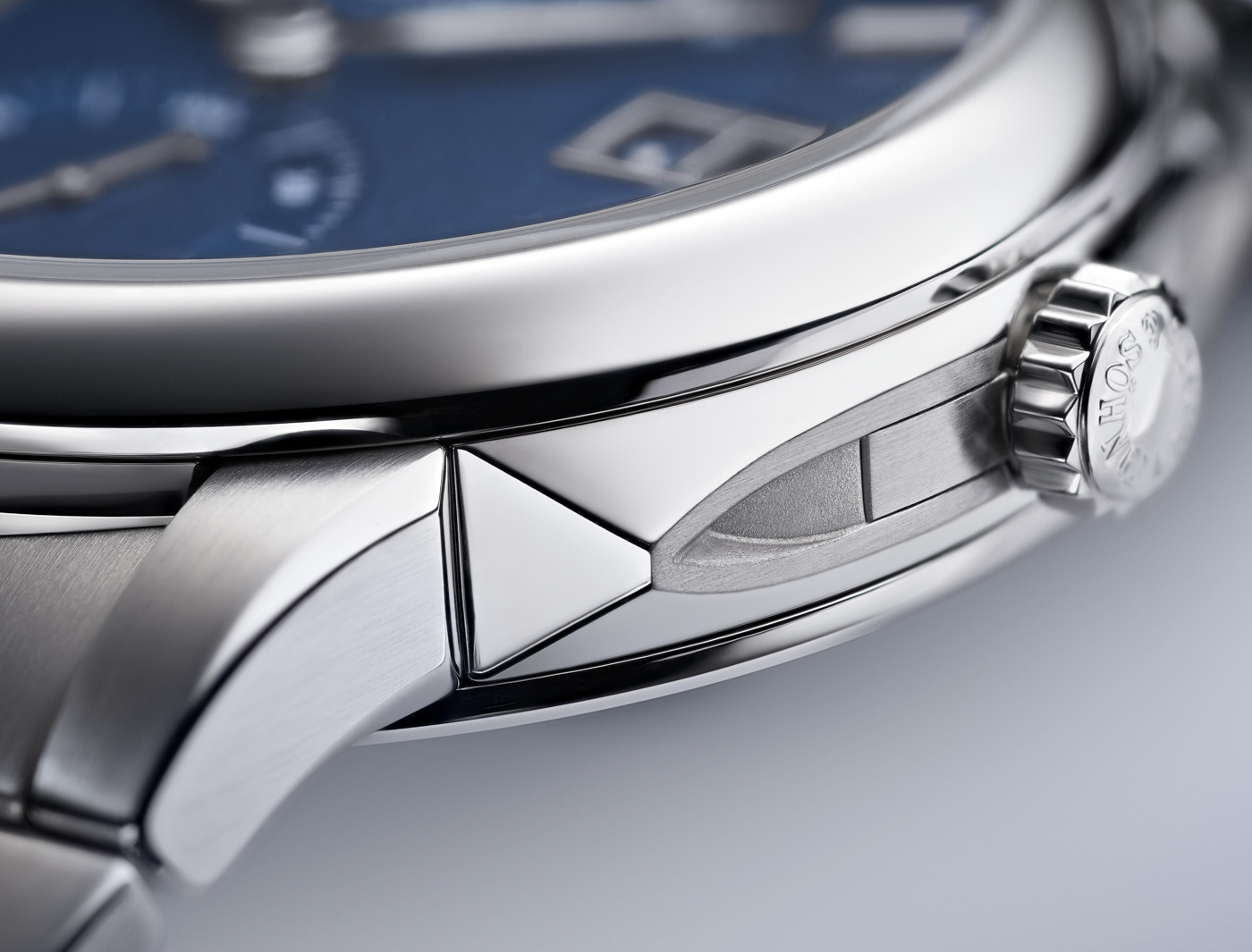 A Big First For Lange

Brand-related matters, looks, and technical specifications are all on our plate, so let’s go in that order. An all-steel, serially produced A. Lange & Söhne watch is a big flippin’ deal for the fans of the brand. With only a handful of unique piece deviations, the Saxon manufacture has strictly adhered to its self-imposed rules of only producing watches in precious metals, namely 18k gold and 950 platinum, something that has, understandably, ruled out the prospect of a sports watch. 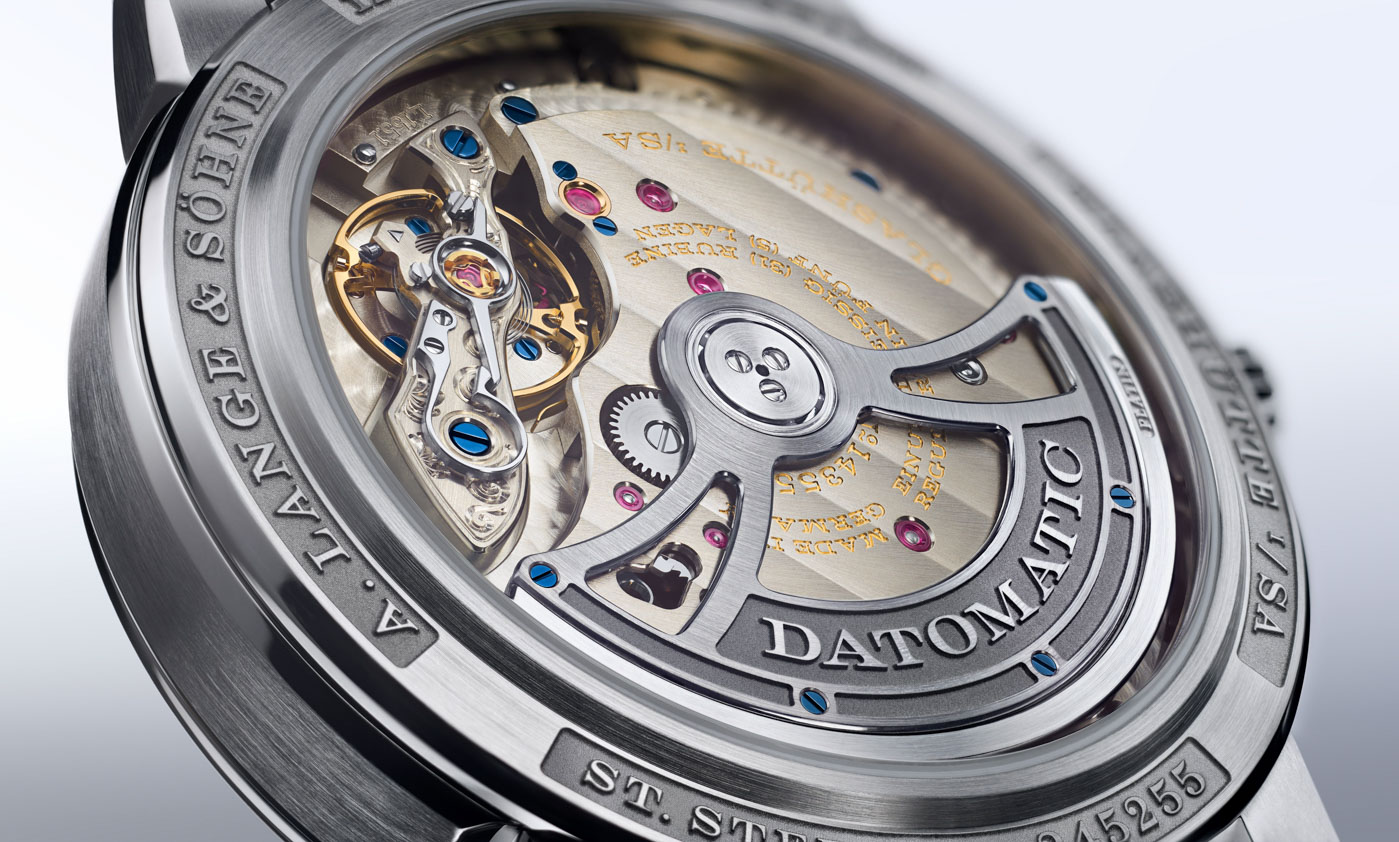 Some 25 years into making precious-metal watches only, for Lange to introduce an all-steel watch that it’s going to “mass-produce” is a major turn of events. The first analogy that I thought of was the 911 going from air-cooled to water-cooled. Some fans loved it, others held torch-lit rallies at their city centers (simply because Internet forums hadn’t been invented yet). Notably, there are two things happening simultaneously with the introduction of the A. Lange & Söhne Odysseus: It is the first steel Lange watch, and it is the first sporty Lange watch — all in one. Not for the faint of heart, that’s for sure! 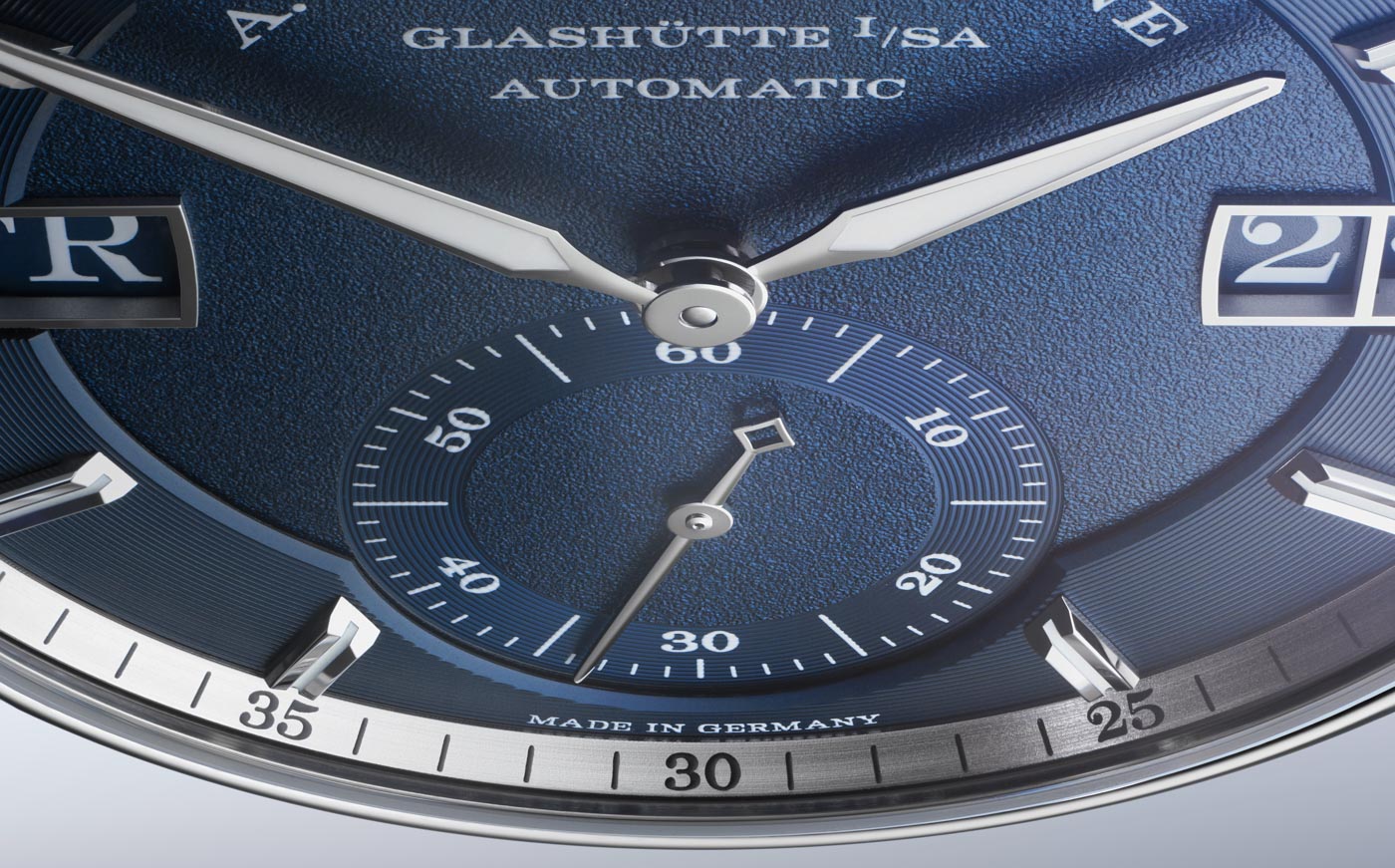 Will this upset some seasoned collectors and fans of the brand? Maybe. No, scratch that and I’ll say: certainly. Everything makes someone angry somewhere, so why would the out-of-the-blue launch of an all-steel sports Lange be an exception?

On a personal note, I’ll add that, judging by the official images at least, the Odysseus (with its proportions and especially its choices of stylistic elements) doesn’t yet add up to a coherent whole for me — but more on that in the looks chapter below.

With that in mind, A. Lange & Söhne broadening its portfolio I don’t think could ever be considered as an all-out bad thing. Lange and its arch nemesis, Glashütte Original, have really been two super-dedicated brands shaping the global image and recognition of Saxon watchmaking — and Lange now having a watch that, by design, should speak to a wider audience, can only add to the diversity of non-Swiss luxury watches. And that’s always a good thing in my book. 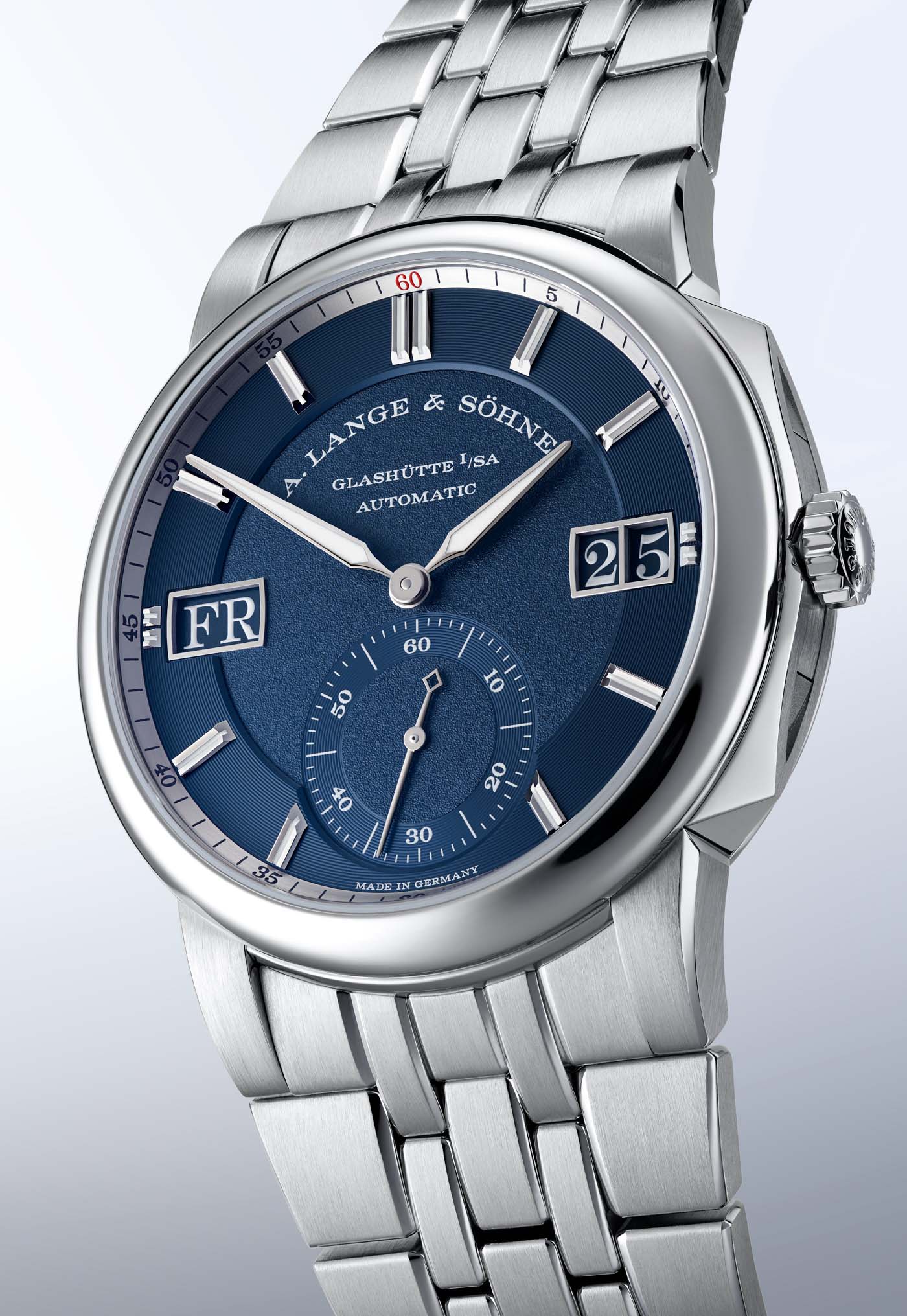 Looks & Design Of The A. Lange & Söhne Odysseus

My first thought was, “Thank goodness it’s not a Lange 1!” When word reached me that a steel, water resistant, “sporty” Lange was brewing, the first spark of hope (and worry) that lit up in my mind was fueled by the imminent threat of a boring, weird regurgitation, and the consequent ruination of the beloved and, at this point, basically perfect design that is the Lange 1.

Presented in what will likely go down in history as an initially controversial package, the stainless steel case of the A. Lange & Söhne Odysseus is 40.5mm-wide and 11.1mm-thick, and is water resistant up to 12 bar, which roughly translates to 120 meters. In real-world watchmaking terms, 10 bar is where proper water resistance begins, with the combination of a screw-down crown and properly sealed buttons, if any. It is always entertaining when brands with strongly defined comfort zones and established DNA set out to abandon said safety boundaries. What’s entertaining about it? That they consciously and subconsciously apply their core codes to these totally new creations.

This is also the same technique that results in new watches the competitively conservative watch audience has programmed itself to reject upon first sight.

Take the Odysseus, for example. Lange has created a new movement that it named the L155.1 Datomatic. The new caliber features two separate indications, a double-disc for the date and a single disc for the day of the week. Both indications can be adjusted through two pushers — pushers that needed proper waterproofing to support the 12 bar rating. As opposed to adding unsightly screw-down pushers around the crown, Lange has recessed these pushers into the crown guard at 2 and 4 o’clock. It is their desire to maintain a clean, unobstructed look that reveals itself in this quirky design element. This being a sports watch of sorts, something more along the lines of “form follows function” probably would’ve sufficed. But no, they went the extra mile to make a sporty watch look a little more streamlined. 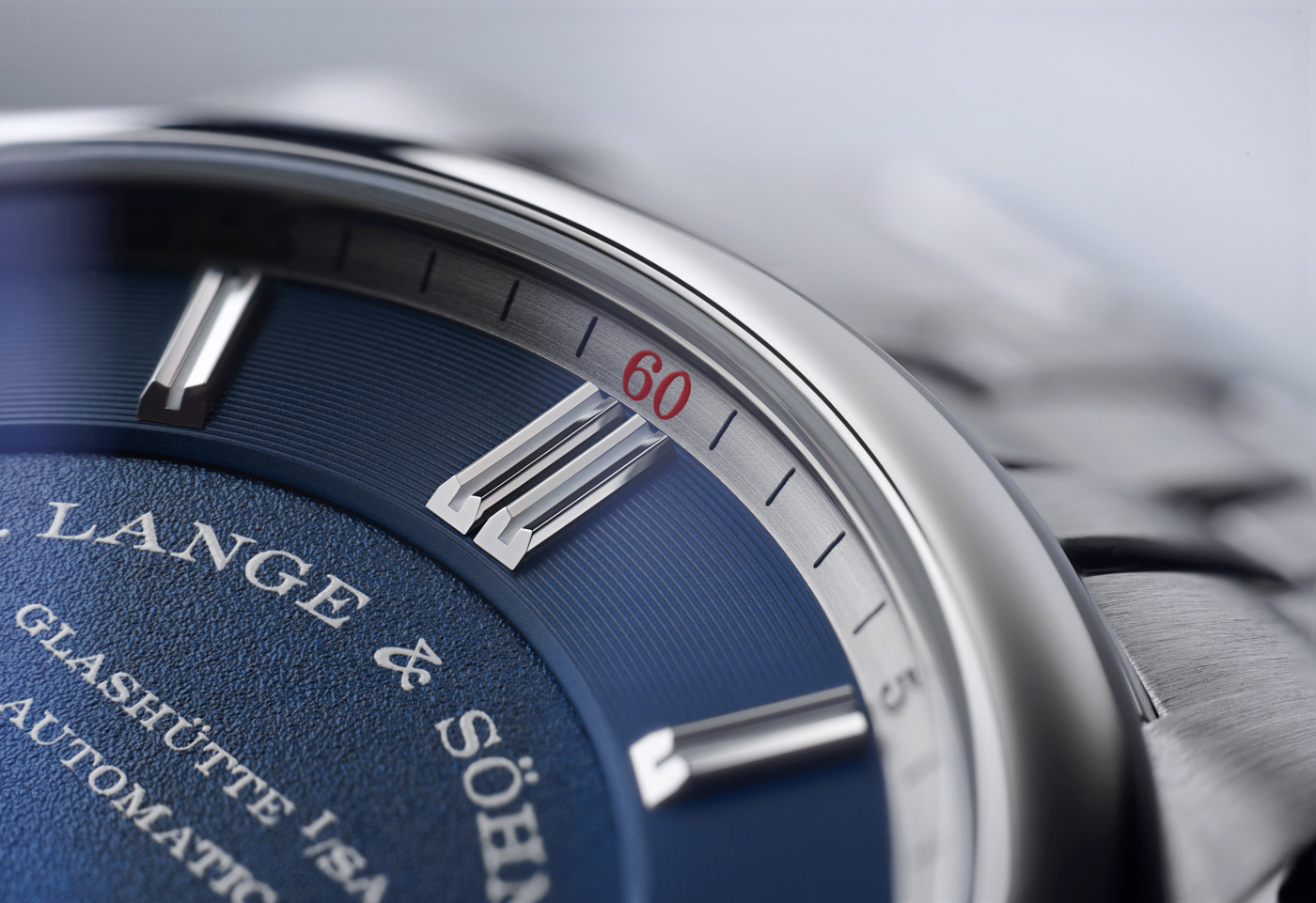 Another apparent testament to Lange trying to take the edge off of its first sports watch is the dial, especially the choice of color. Blue is the new black in watchmaking. Consequently, it’s become a stale, flat color that’s had every last bit of novelty and nobility drained out of it completely. Not by Lange, but by everyone, cumulatively. If you like blue, that’s great — but in watch design, it no longer has much excitement or novelty. I, for one, would have loved to see a more ballsy launch color, like crisp white (with the white on blue discs remaining for some contrast), burgundy red, or some outdoorsy green — or at least a different color dial center, maybe. But blue has been the go-to color of nigh-on every Richemont brand, irrespective of the type, style, market segment, and target audience of a brand, a collection, or new reference. 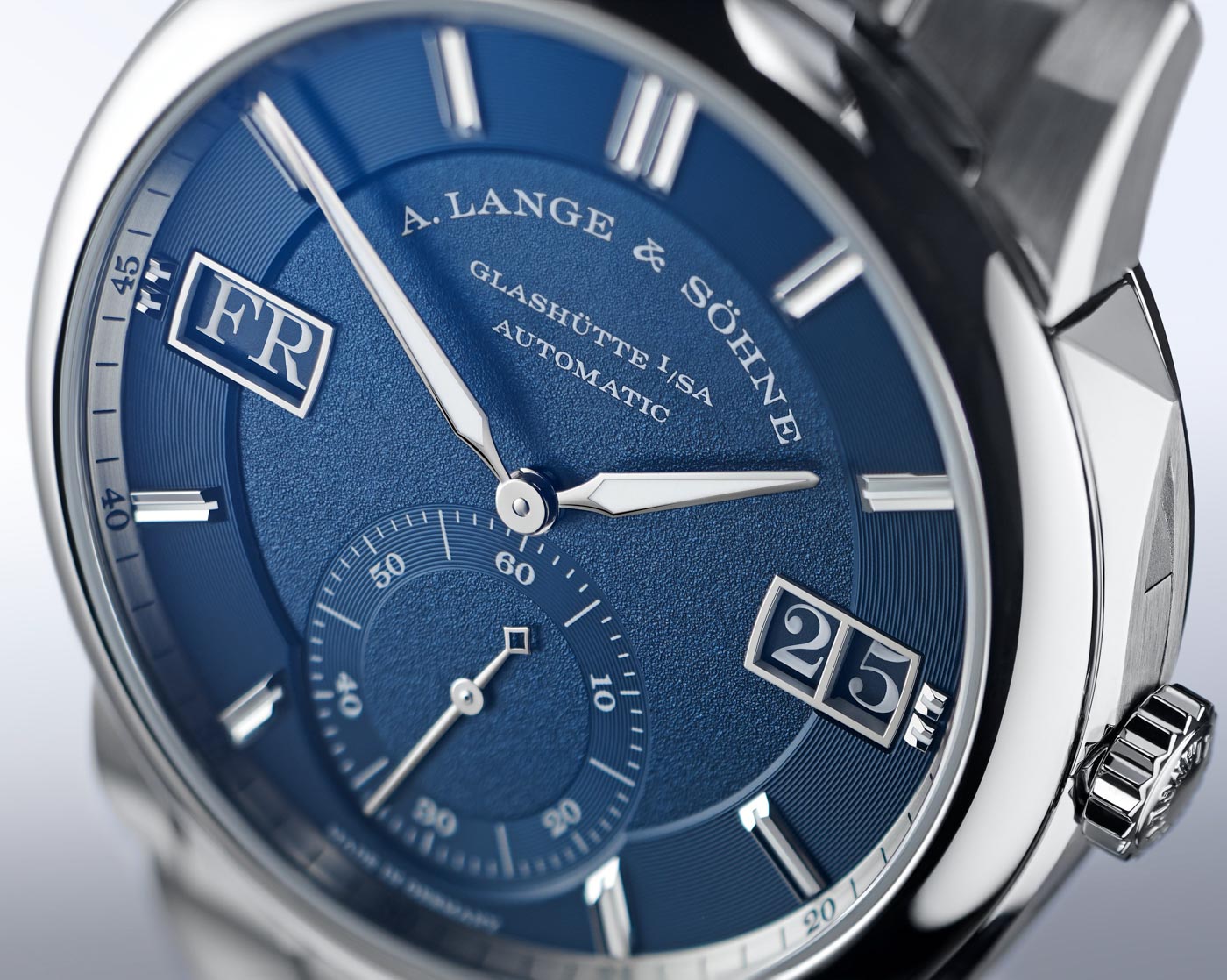 Legibility is superb, though. It’s interesting how the typical lancet-shaped hands stand out so much more on this design than they do on the more restrained and classical Lange watches. The applied, 18k white gold indices, as well as the main hands, feature luminescent material — a rare, but not entirely new thing for A. Lange & Söhne watches. 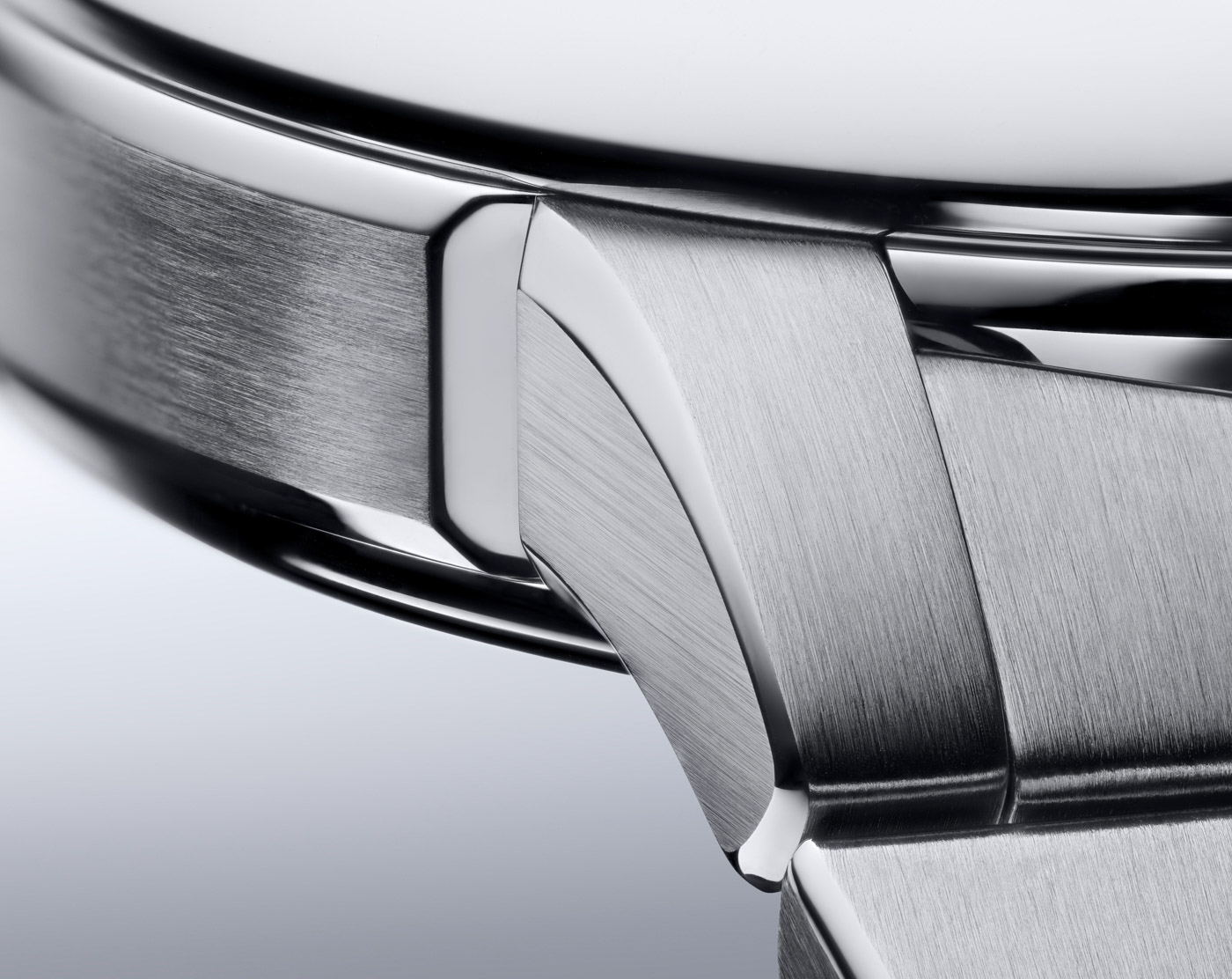 I have already mentioned the two watchmaking giants of Glashütte, and they both have established themselves as the creators of some properly beautiful and extremely well-made cases. The truly beautifully beveled and polished case profiles and lugs are a big part of their appeal, and the A. Lange & Söhne Odysseus now adds an all-steel bracelet to that successful mix. It is a wider, more masculine, more defined — and definitely more intricately decorated — take on the five-link design made famous by and associated with the Rolex Jubilee bracelet. Judging by the images, I can already respect the amount of work that goes into the beveling and decoration of each individual link that makes up the bracelet of the Odysseus — and so I’m not saying “no” to it off the cuff but want to check it out and wear it around first. If there’s anything questionable about the design, it is in its integration with the outer edges of the lugs — generally speaking, that look can create the appearance of a small watch head fixed to a wide bracelet. 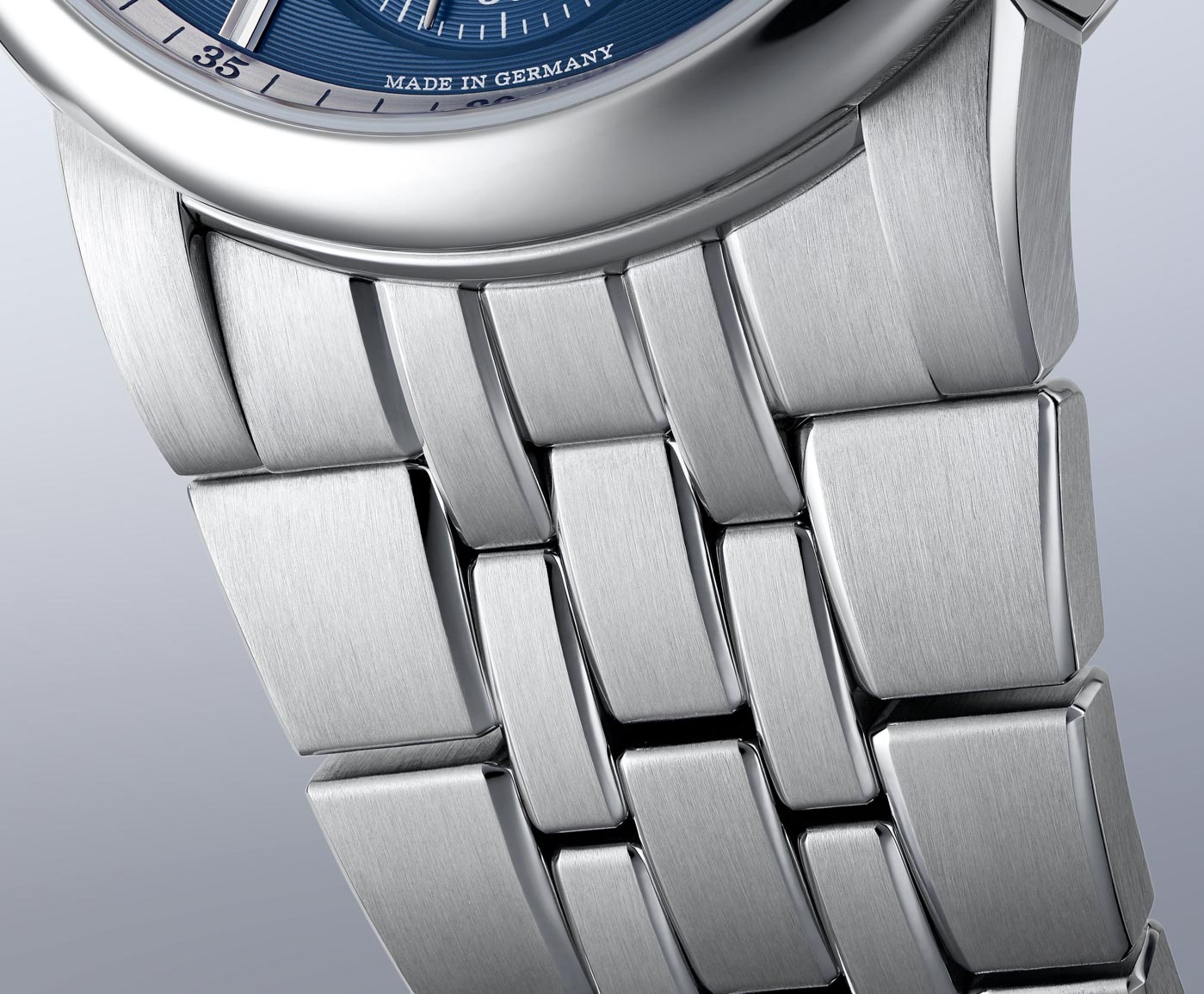 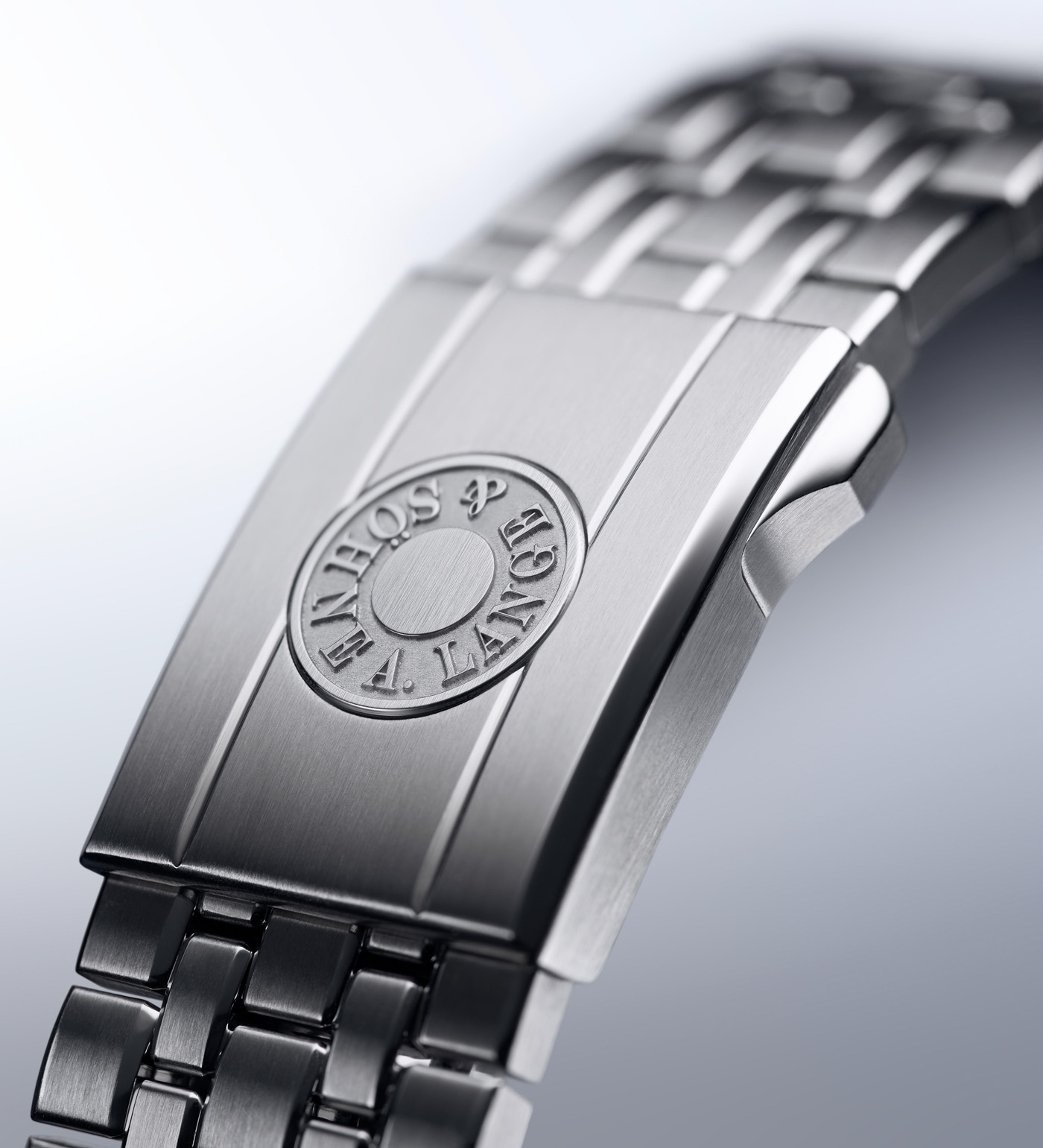 The steel bracelet is secured around the wrist by a safety deployant buckle that includes a precision adjustment mechanism that can be operated without having to take the watch off the wrist. Just press on the embossed Lange logo in the center of the buckle, and the bracelet can be adjusted by up to 7mm. Not revolutionary, by any stretch of the imagination, but a feature that damn well should be part of every luxury sports watch bracelet made today. 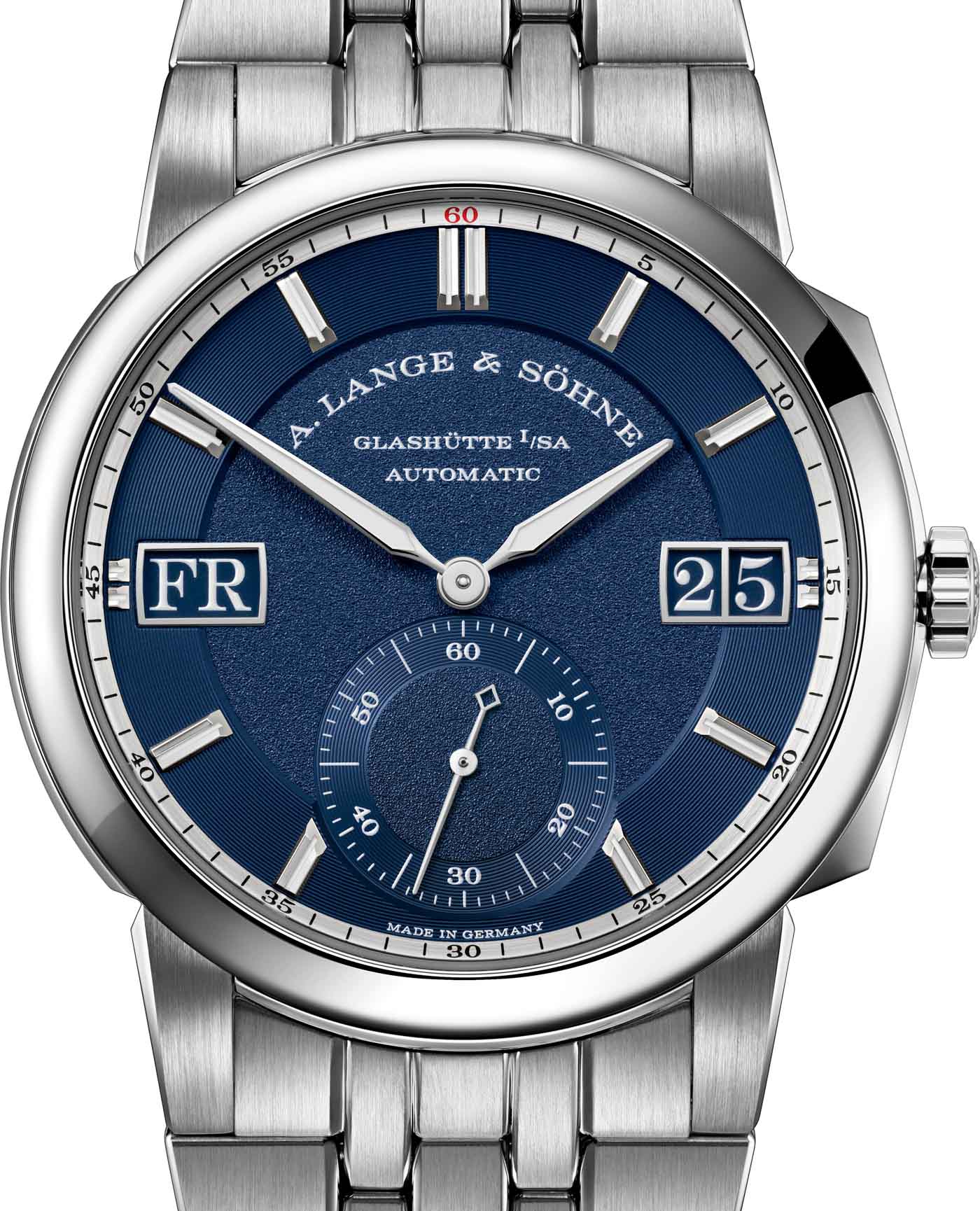 Taking a bit more time to look at the new A. Lange & Söhne Odysseus, I realize that it has a bit of a Zeitwerk look to it with those double windows so neatly positioned by 3 and 9 o’clock. Somehow, with its downturned lugs, thin and perfectly round bezel, and strong dial, the Lange Odysseus also has a Calibre de Cartier feel to it (if anyone cares to remember this more-or-less discontinued steel luxury watch from Cartier, a sister company of Lange within Richemont). 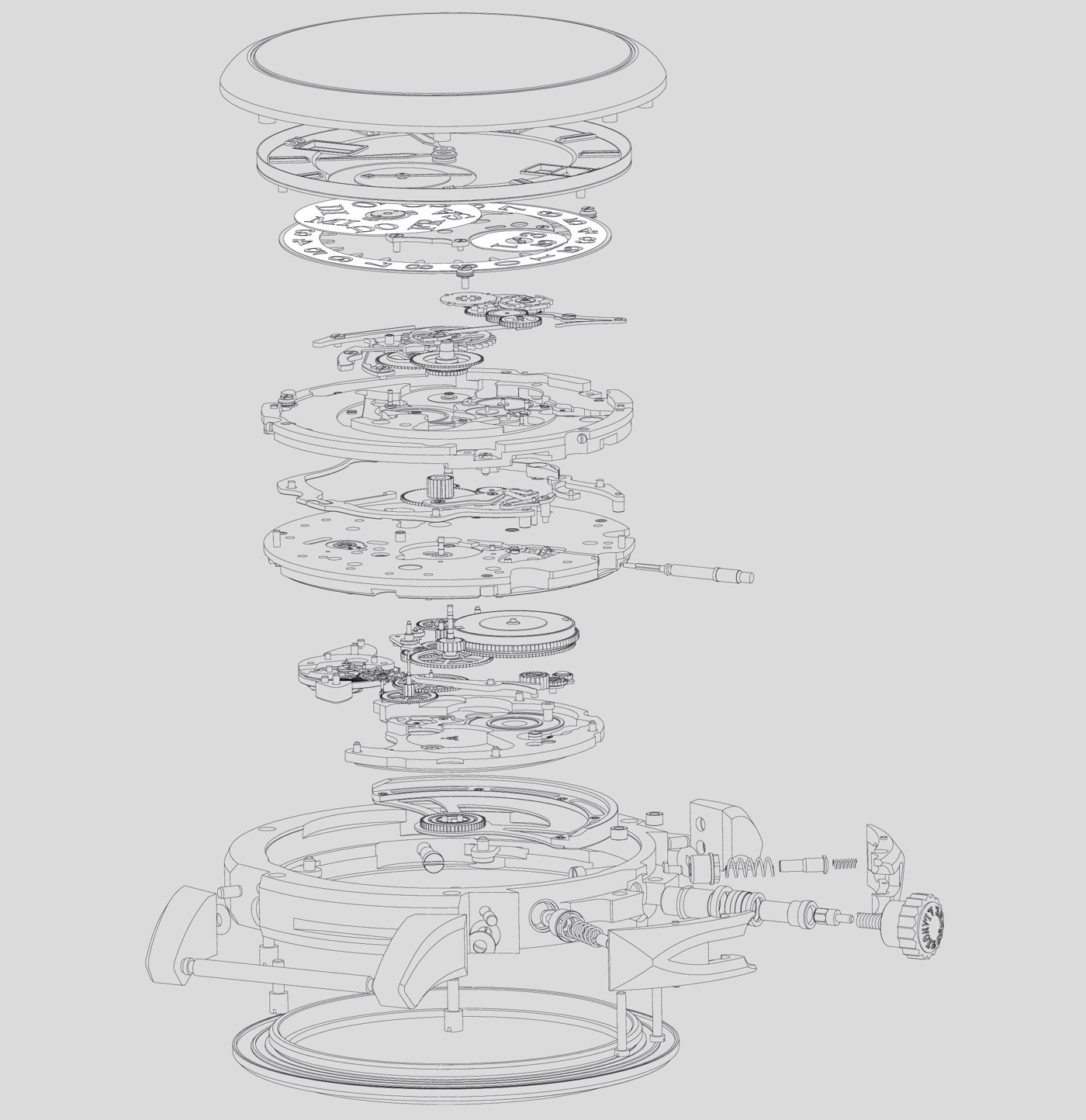 The Datomatic Technology Inside The A. Lange & Söhne Odysseus

In the A. Lange & Söhne Odysseus, the classic “outsize date” aperture of Lange at 3 o’clock is complemented by a day of the week display at 9 o’clock, tailored to be exactly the same size. As can be expected from the brand, there is a lot of neat watchmaking action going on under the dial to ensure that these two displays switch at the right time and in the correct way. The day of the week display is controlled by a 24-hour wheel that is,  not surprisingly, connected to the hour wheel of the movement (this completes a rotation every 12 hours). There appears to be no word from Lange on these displays changing instantaneously at the end of the day — from the creators of the Zeitwerk, which pulls off an instantaneous change once every minute, I reckon we can nevertheless expect the instantaneous advancement of these displays at midnight. 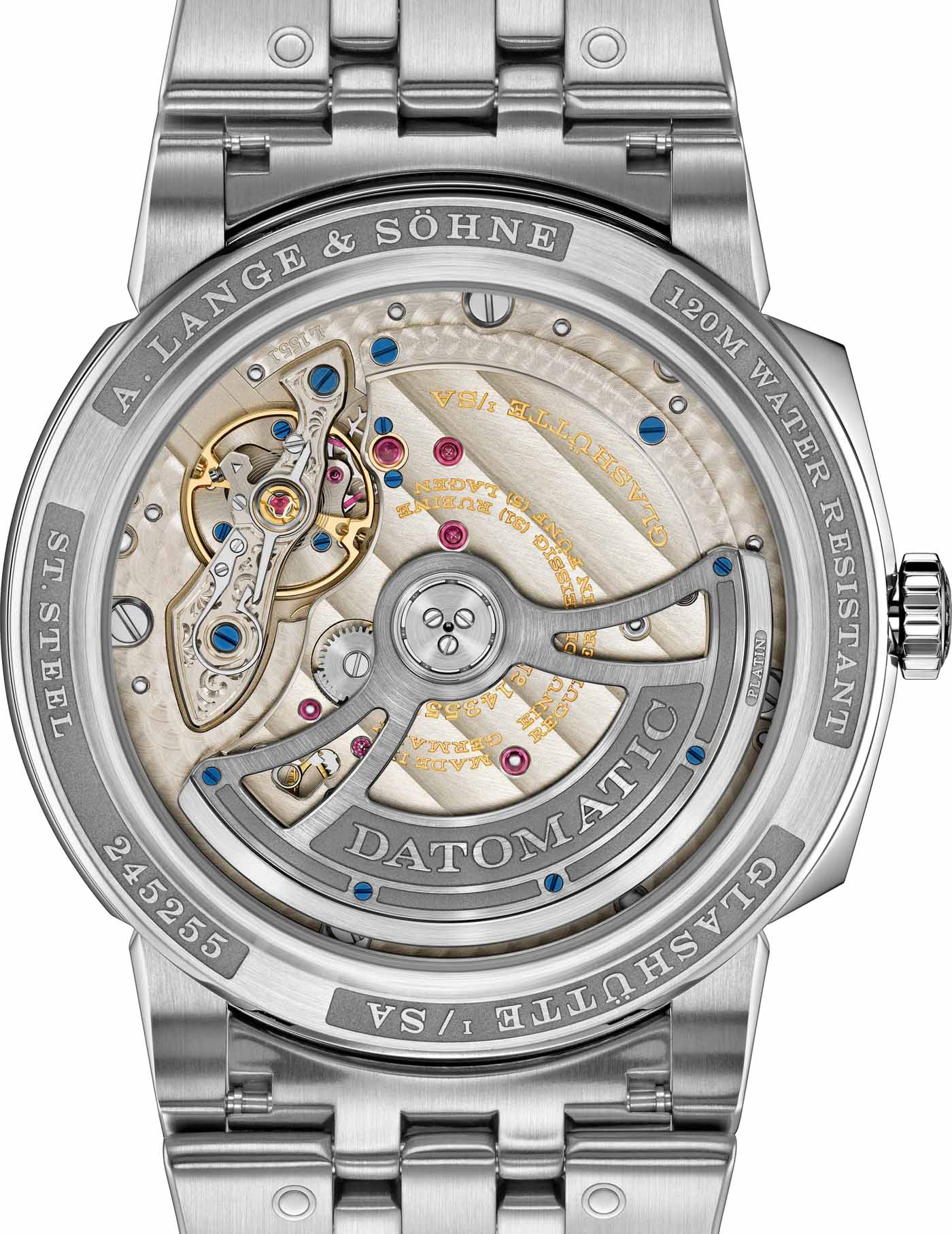 With the new L155.1 Datomatic caliber, we are looking at 50 hours of power reserve combined with a more modern and stable operating frequency of 4 Hertz, a first for Lange. Also serving timekeeping stability is a newly designed, larger-than-usual balance wheel that is regulated with four “poising” screws whose heads are flush with the outside edge of the wheel to minimize air friction. The balance wheel is secured in place not by the traditional balance cock (a one-ended “bridge”) but a proper bridge that arches over the balance wheel and is screwed down not just at one end, like a cock, but at both ends. The component is hand-engraved, as is the norm for a high-end luxury watch made in Saxony. 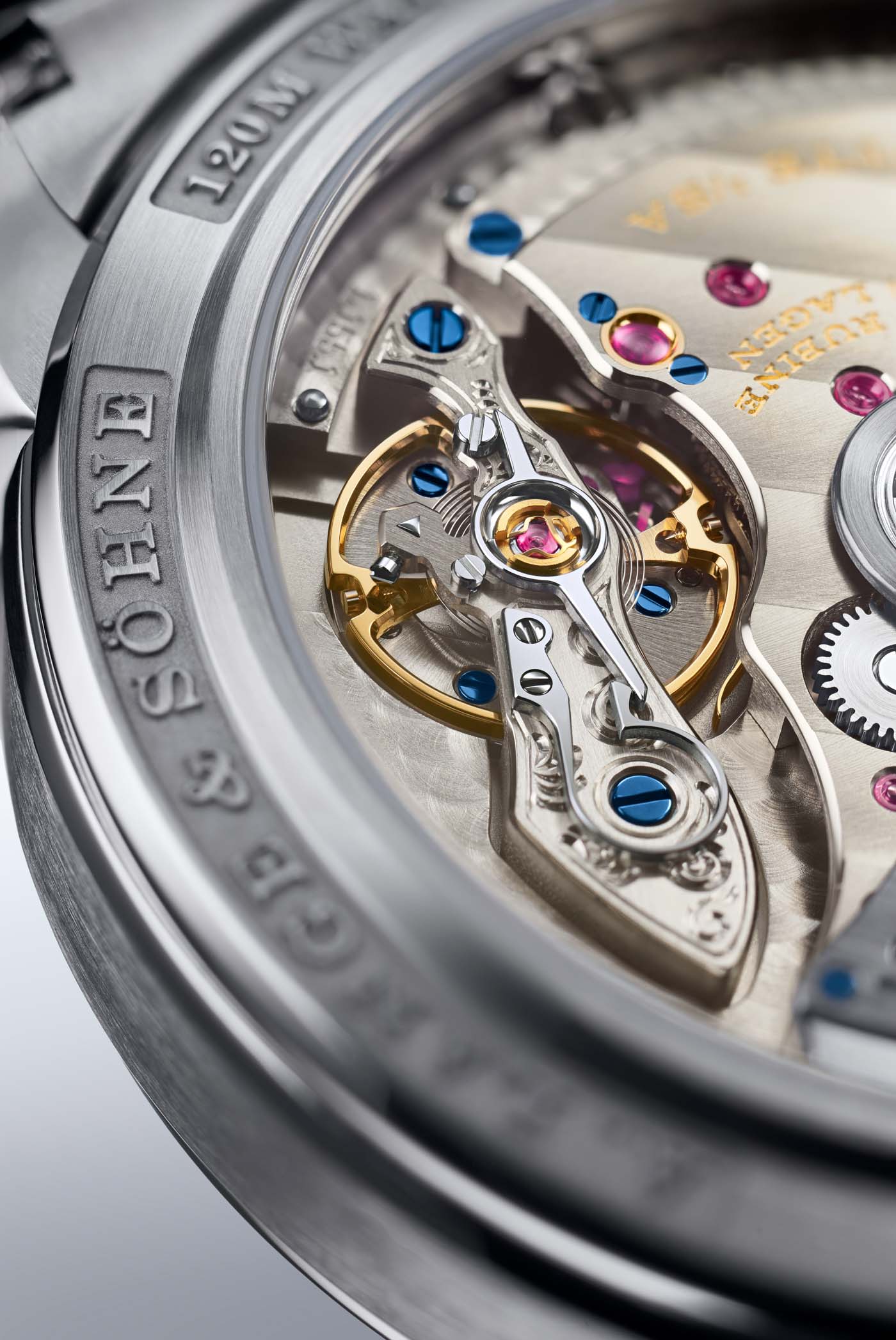 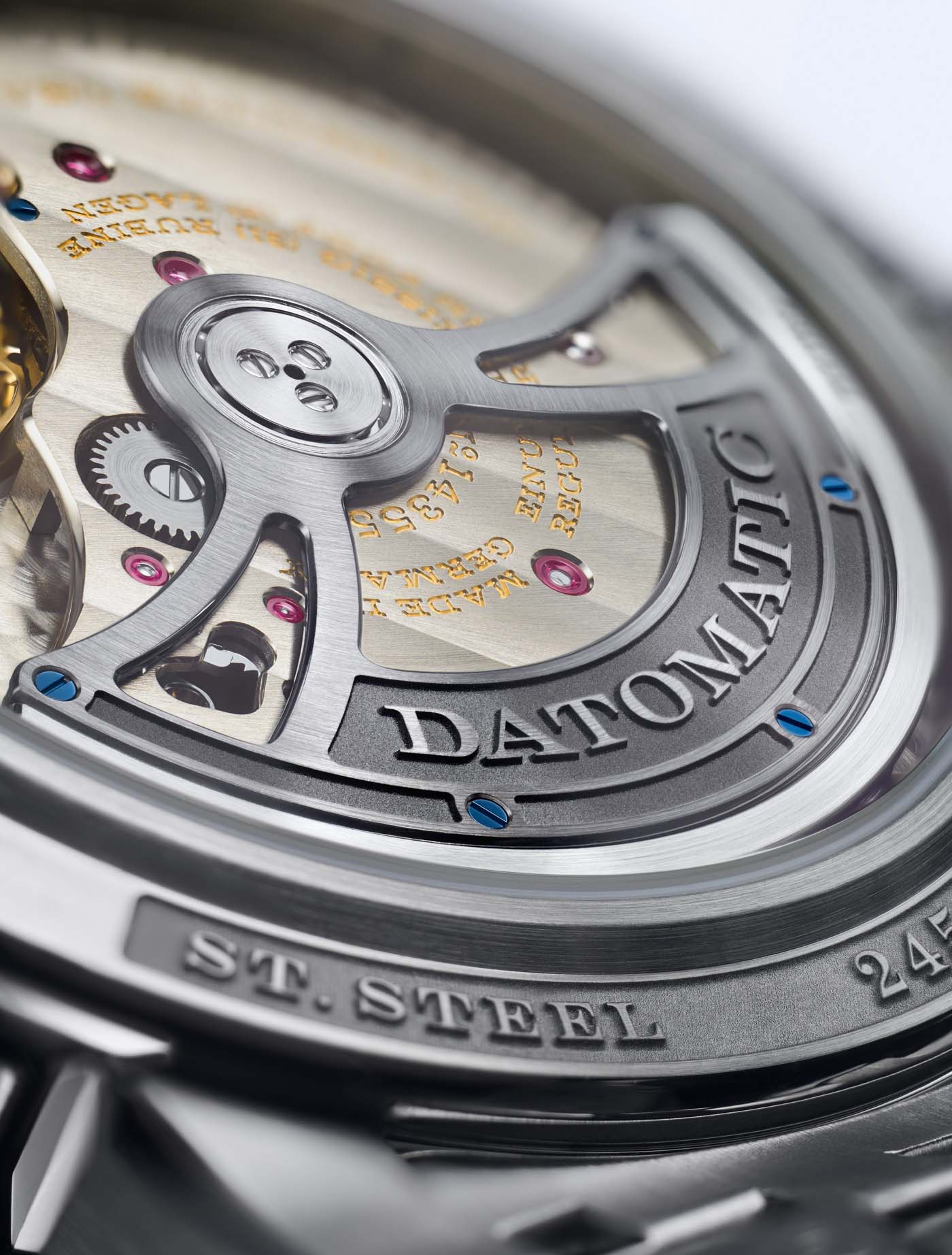 The black rhodium-plated, self-winding rotor contains a thin strip of platinum around its outer edge for added heft and moment of inertia. The L155.1 Datomatic movement contains as many as 312 components, 31 jewels and 1 screwed gold chaton — that’s a lot of room for typical German watchmaking jewelry. The movement, claimed to measure in at 6.2mm-thick and 32.9mm-wide, shows up larger than it actually is. The wider caseback view reveals a more closely packed arrangement of going train and escapement, and it is through the combination of neatly tailored baseplate and a larger self-winding rotor that it fills up the 40.5mm case so nicely. This is a very elegant way of gaining some extra girth and presence for an otherwise more compact movement architecture — a much more welcome sight than a wide rear bezel and narrow sapphire caseback. 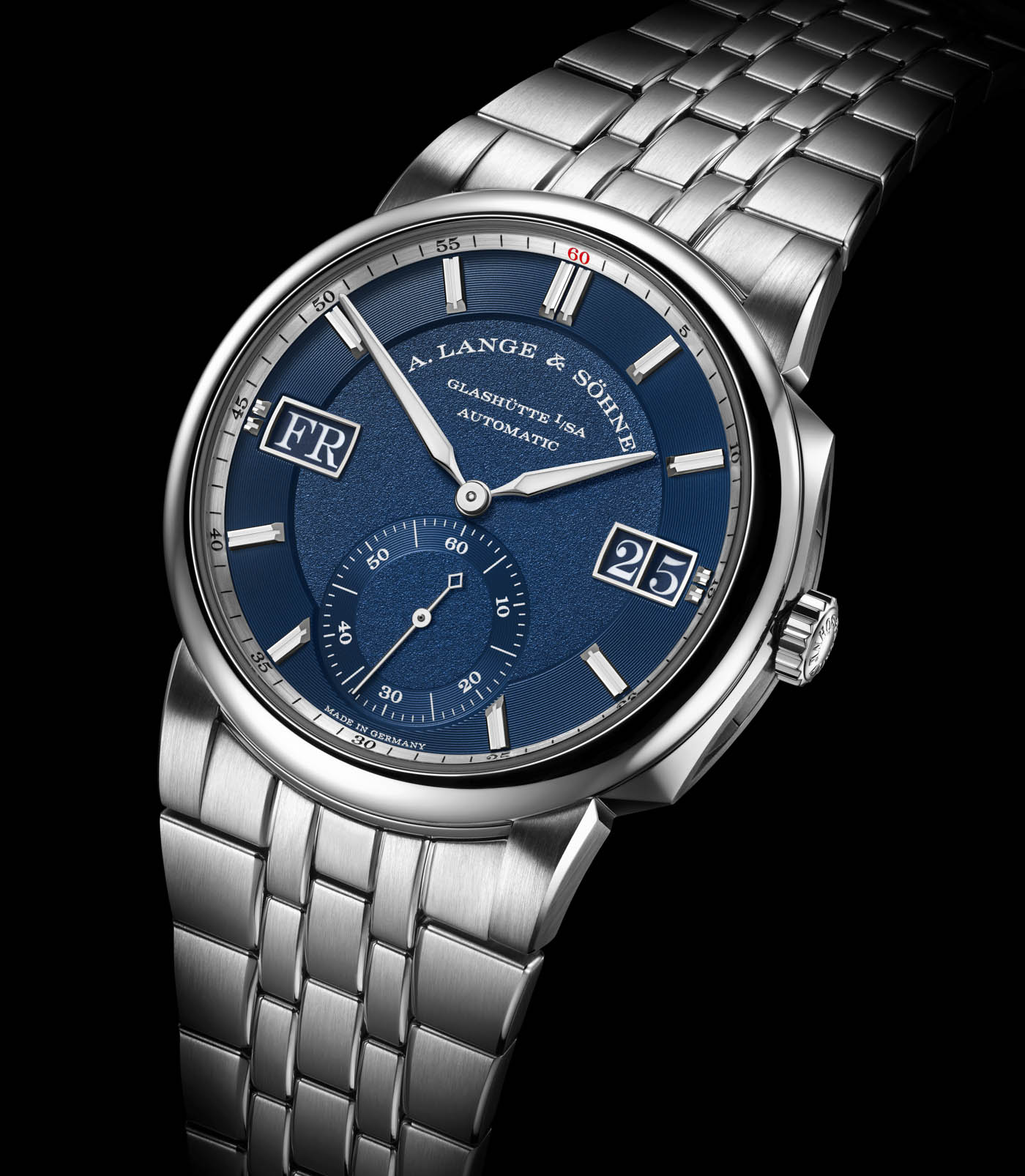 The A. Lange & Söhne Odysseus, like the hero of Homer and king of Ithaca, apparently wants to pose as an adventurous, brilliant, and versatile character — and in some crucial ways, it performs that task well. That said, I am looking forward to some extended hands-on review time with it to get to grips with the first steel sports Lange ever made.

The A. Lange & Söhne Odysseus in all-steel is priced at €28,000, which places it well below (about half) the current market value of Patek’s Nautilus, but close to three times as high as the price of the also beautifully made, albeit less complex, Chopard Alpine Eagle. You can learn more at the official A. Lange & Söhne website.