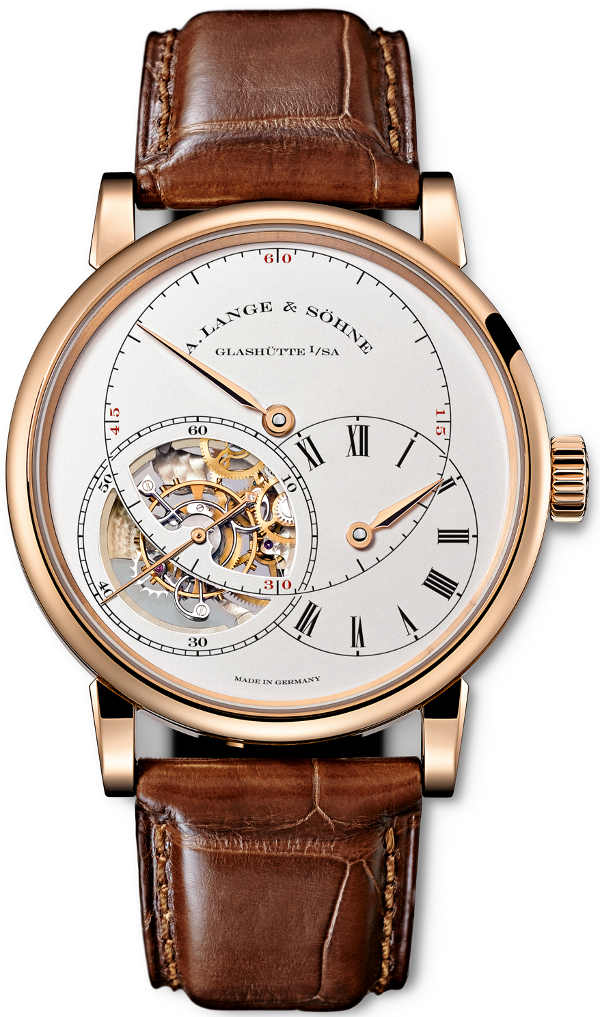 2011 will experience the release of this new fusee and chain transmission watch from Glashutte, Germany based A. Lange & Sohne. To be honest, fusee and chain movement watches excite me a lot more than tourbillons. Not that they are mutually exclusive, but I really love the idea that there is a tiny hand-made (bicycle style) chain in a watch helping to move power from the mainspring to the movement. Plus, a fusee and chain is a lot more useful for accuracy and rate reliability than a tourbillon is.  Today there are only a few brands that offer watches with fusee and chain complications. The three that I can think of off the top of my head are A. Lange & Sohne, Breguet, and Cabestan. Who am I missing?

Cabestan does the fusee and chain best because they make it visible on the dial. On This lovely Lange you’ll have to peek around through the back of the watch for views of the chain. If you look at the movement image in this post you can see bits of the chain wrapped around the brass colored mainspring barrel at the upper right-hand part of the movement. In terms of a video on how a fusee and chain works, the best I could find is a Breguet video on YouTube here. 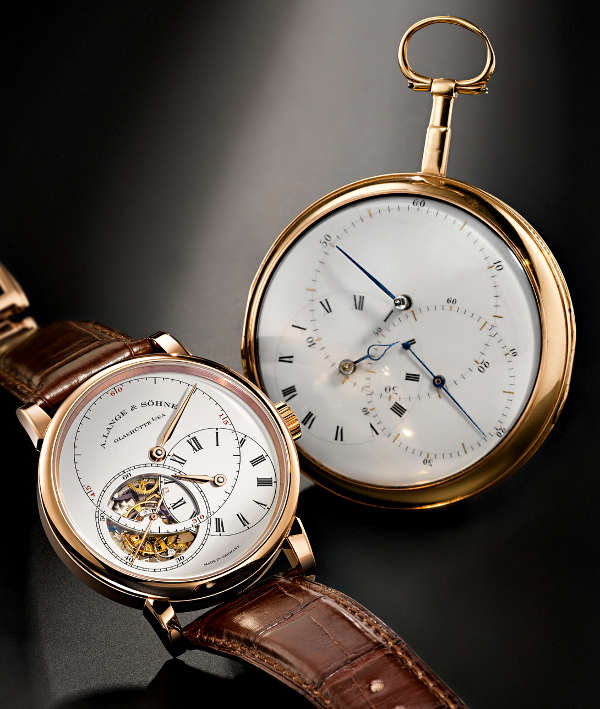 So the new watch is called the A. Lange & Sohne Richard Lange Tourbillon “Pour le Merite.” In addition to a fusee and chain, this watch has a three subdial regulator style display, tourbillon (gotta have that tourbillon in there) and a stop seconds mechanism (stops the seconds hand when you pull the crown out for more accurate time setting). The watch, based on certain regulator clocks of the past, as well as an historic pocket watch, is beautiful. To me, most of what Lange releases is beautiful. Though in this instance I am beginning to grow a bit weary of the this watch’s naming convention. There are other watches in the collection with the terms “Richard Lange, Tourbillon, and Pour le Merite” in them. I trust Lange that this new combo of words is new, but it just sounds too much like their other names. Lange actually has some very clever watch names, so I’d like to see them apply more thought in to all new watch titles. Some of my favorite names in their collection are the “Tourbograph, and the Zeitwerk.” 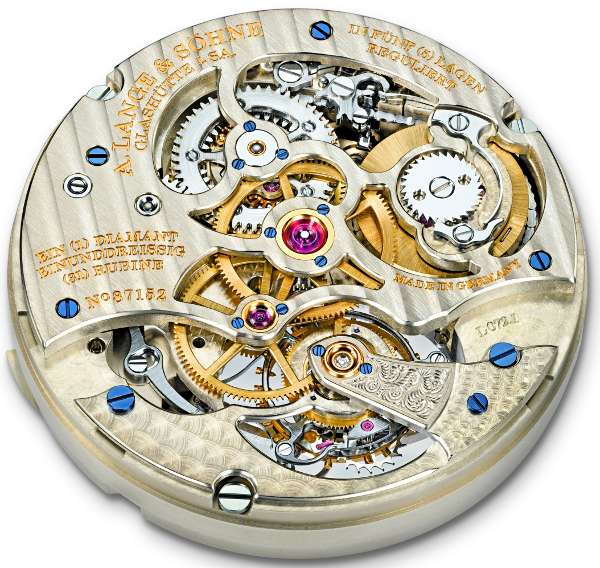 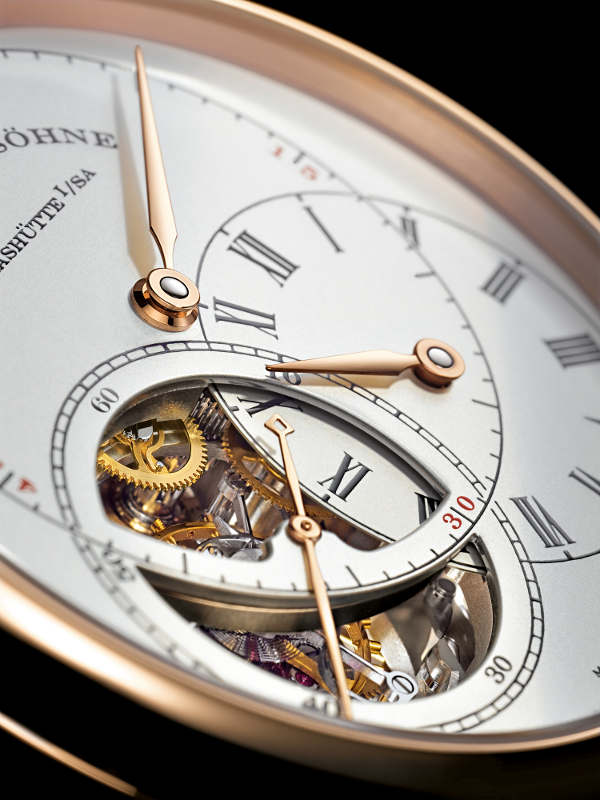 In this instance the dial of the watch contains three overlapping subdials. These each represent either the dial for the hours, minutes, or seconds. This concept is not new, but this particular arrangement is uncommon. Lange ups the ante a bit by adding something additionally interesting. The seconds dial is cutaway – with a view of the tourbillon and movement underneath it. There is also a small retractable section that makes up the “full” hour dial to the right of it. That disc is moved and “hidden” for a full, unadulterated view of the tourbillon window when not in use. Let me explain how it works. When the watch is telling the time from 12 – 6 o’clock, the portion of the disc that roughly has indicators for 8 – 10 o’clock is hidden from view. When the time is 6 o’clock, the hidden dial segment instantly moves into the view! Once the time reaches 12 o’clock, the disc instantly moves out of view. Aside from being cool, allowing a full view of the tourbillon window, this complication ensure that the watch wearer will never have to guess what time it is – Teutonic need for order!. It is a little thing, but ads to the complexity, precision, and interest in the watch. Seriously, only the Germans make complications like this – and I love them for it. 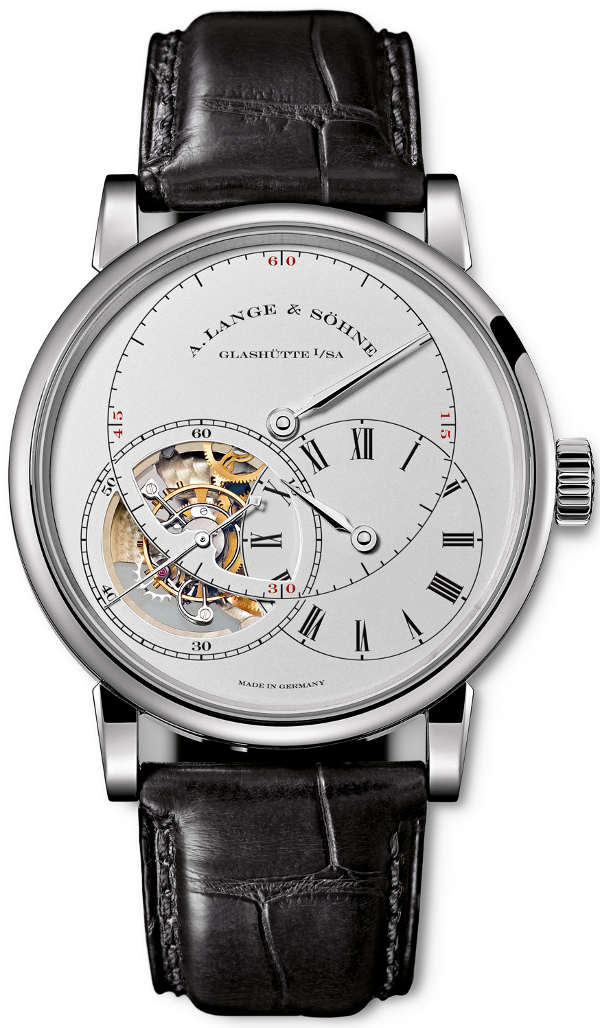 I mentioned that the watch has a stop seconds feature. Your basic ETA 2824 has this function, so it isn’t inherently complex. Though it is when you have a tourbillon. A. Lange & Sohne was the first to develop a stop seconds mechanism for a tourbillon a few years ago, and that complication has been put into place here on the Richard Lange Tourbillon Pour Le Merite watch.

The timepiece is really beautiful. Another gorgeous interpretation of an historic timepiece by A. Lange & Sohne, with a few new tricks to make it interesting. Inside the watch is the in-house made and designed Calibre L072.1 manually wound movement. You know the features it has already, but it has a 36 hour power reserve (a bit low compared to their other stuff, but there was likely not room for a long fusee and chain (I am guessing that is the reason). Lange also includes a hairspring that they manufacture themselves. These “Lange hairsprings” aren’t placed in all Lange watches, just a select few – and very few watch makers are able to make hairsprings. The movement itself has 351 parts, but counting the chain (which is 636 parts) , it has 987 parts. Typical impeccable decoration from the Lange manufacture as well.

Lange puts the Richard Lange Tourbillon Pour Le Merite in a 41.9mm wide case in either platinum or 18k pink gold. The hands on the dial are in gold, and the dial itself is solid silver. Strap is brown or black crocodile. The platinum version of the watch will be limited to just 100 pieces, while the pink gold model will not be a limited edition. In pink gold the watch is $193,600 while that price jumps to $233,600 for the limited edition platinum model.