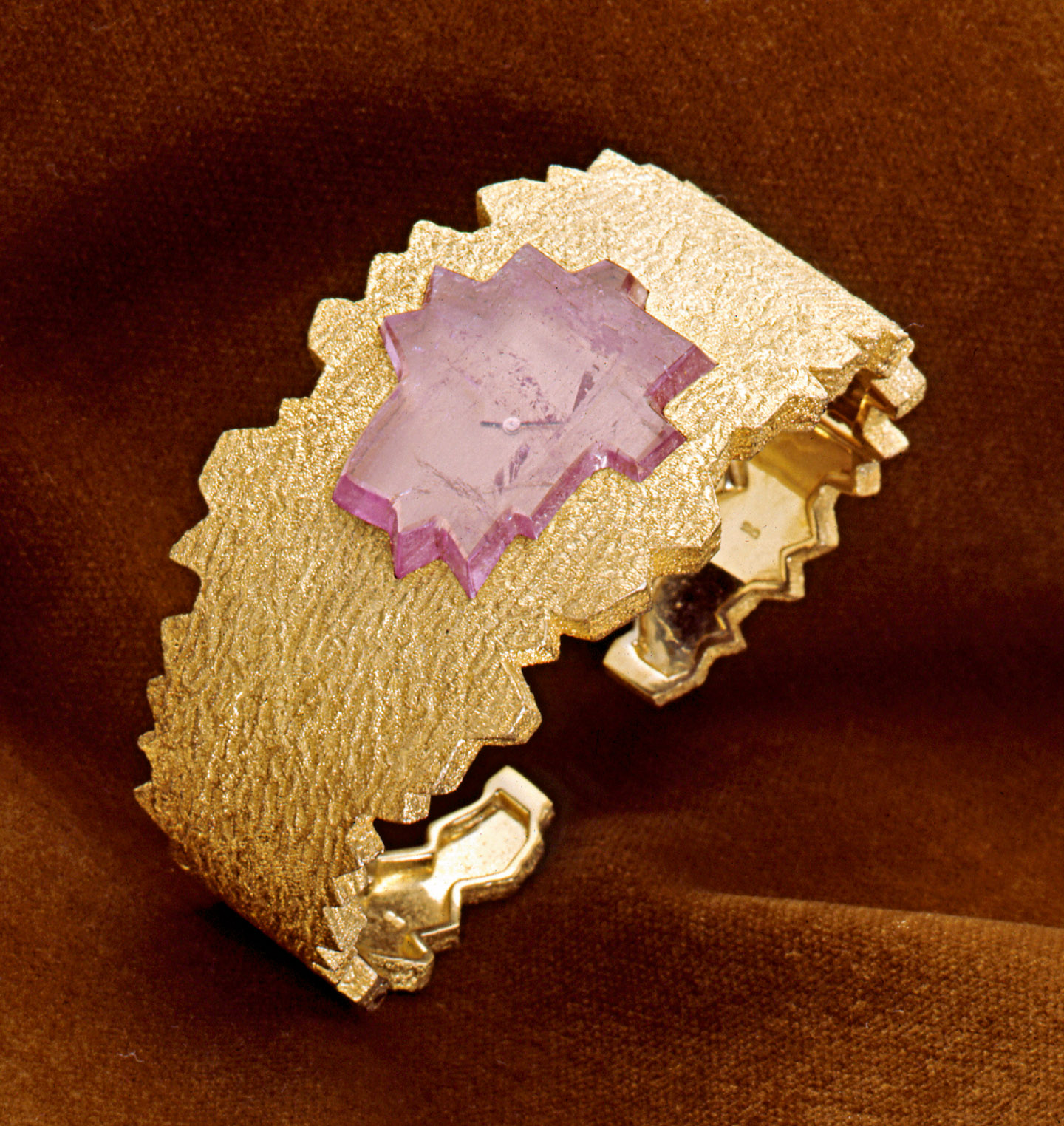 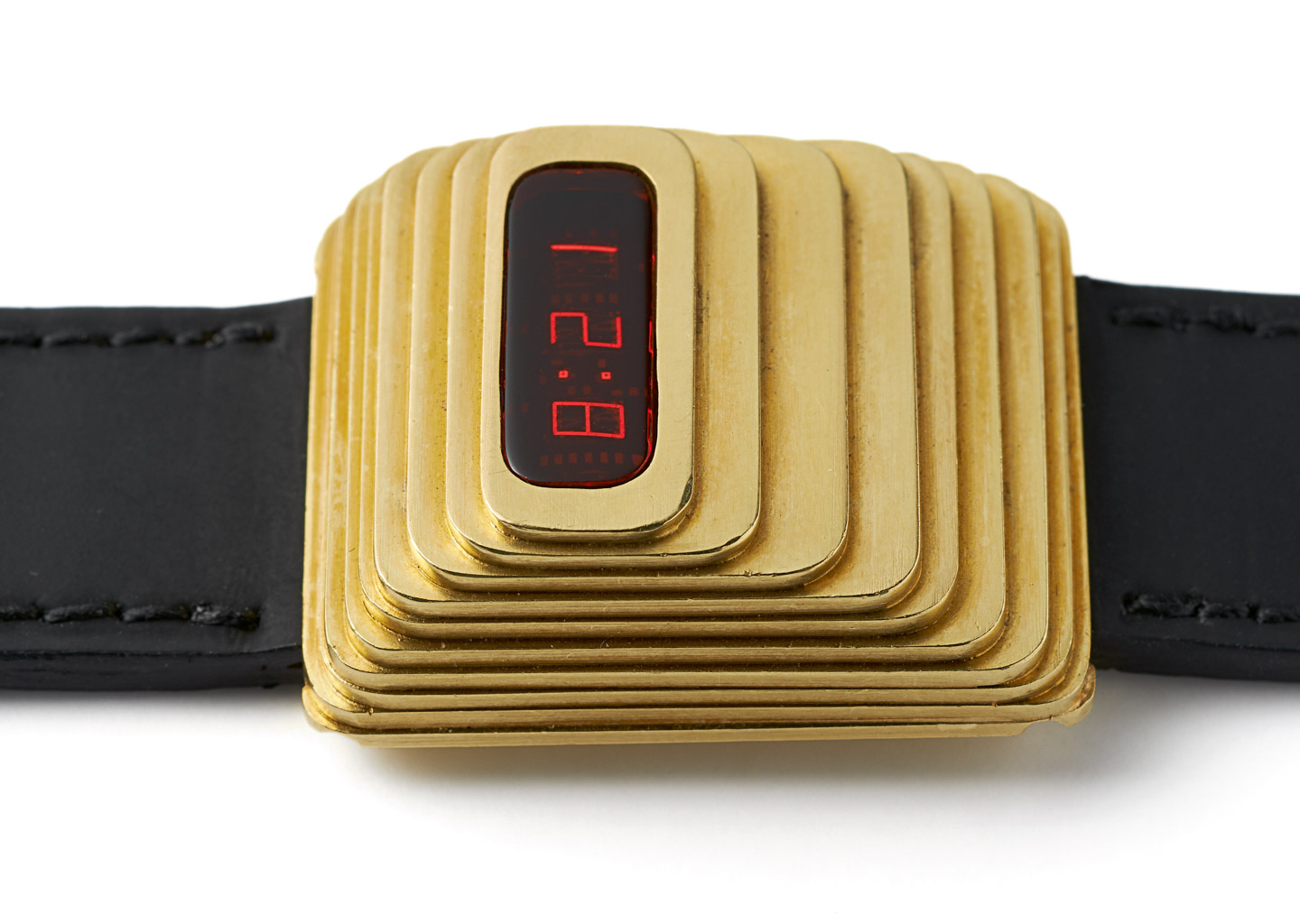 Andrew Grima: The Father of  Modern Jewellery is the first major monograph on Britain’s arguably greatest jewelry and watch designer.

In the early to mid-1970s, British designer Andrew Grima created two of the most groundbreaking and rarest watch collections of the 20th century. The first, for Omega, was conceived in 1969 and is perhaps the most avant-garde collection of timepieces in the history of the watch. The second, created in 1976 for Pulsar (inventors of the LED watch), has almost “unicorn” status amongst digital watch collectors; most have heard of their existence but have never seen one in reality.

In 1969, over dinner in Philadelphia, Robert Forster, Omega’s Director of Production, outlined a brief to British designer Andrew Grima for a collection of watches that would recreate the same sense of fantasy and flamboyance that had characterized the elaborately crafted decorative timepieces so coveted by the aristocracy during the 17th century and again at the turn of the 19th century. Grima, who had never made a watch before, insisted on being given completely free rein in terms of overall theme, individual designs, component materials, and cost per piece – the only thing he conceded was that each watch would have an Omega movement. He got the job.

Within two months of the contract being signed, Grima made the first of many visits to the Omega factory in Biel/Bienne and Omega’s offices in Lausanne, presenting and planning what was to become the About Time collection. It was perhaps the most important and certainly one of the most dazzling and original watch collections of the century. Comprising 55 watches, the About Time collection had two unifying themes: The first was the idea of seeing time through a colored gemstone; the second was keeping the dial completely clear apart from the hands. This allowed the watch face to blend seamlessly with the overall design and distanced the wearer from the tyranny of time. 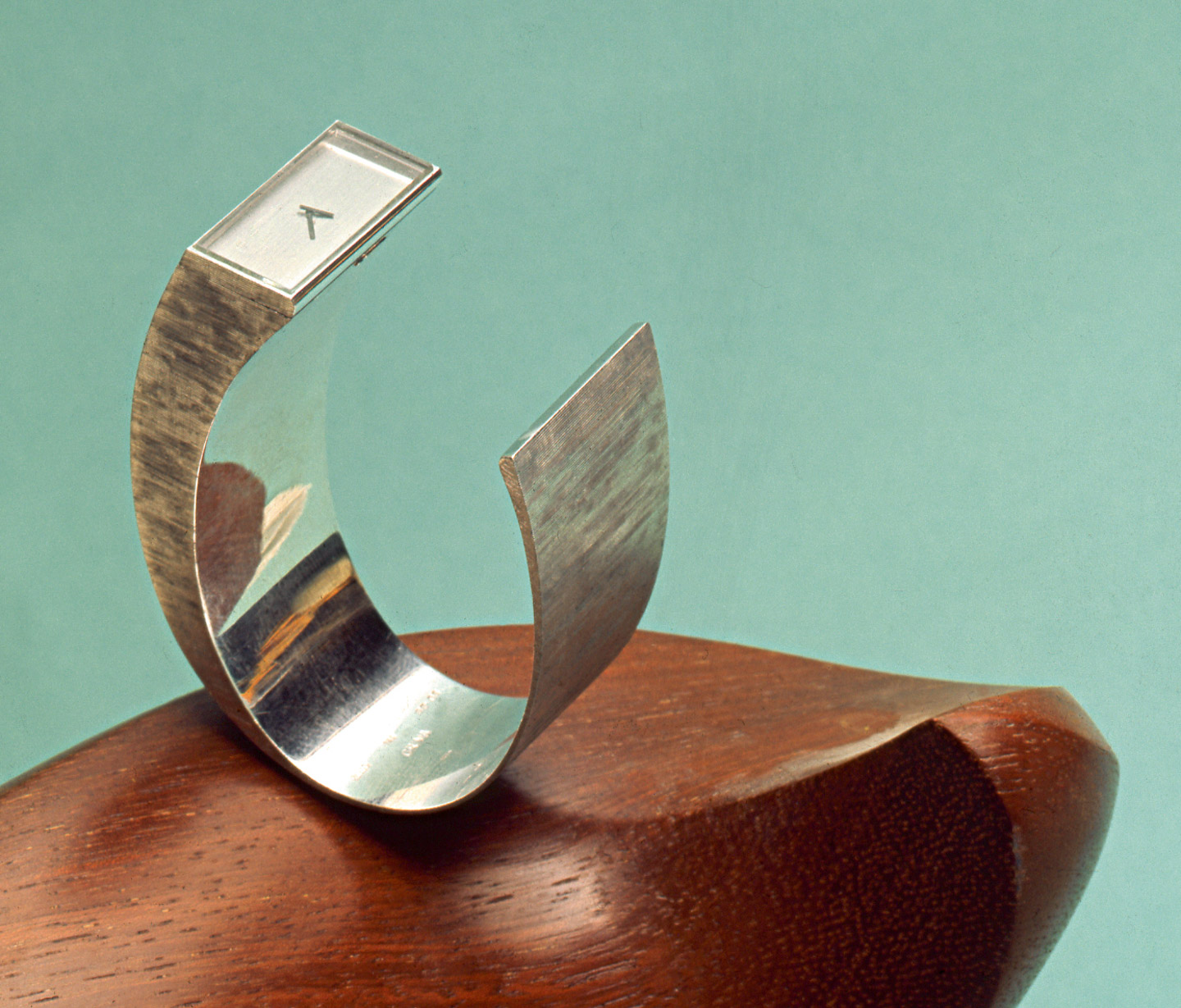 Having sketched his initial ideas in just a few weeks, Grima presented the first prototype designs to Omega in Switzerland. The initial reaction was muted:

“The first time I went to Switzerland with the first experimental wooden models, I was greeted with silence and then a series of polite questions. The Swiss are not inclined to go mad. They instantly started banging the models against the table to check practicality. Then when they saw the first jeweled pieces they were delighted, and the wife of the managing director actually ordered one. As she was the first woman to see them – and she sees quite a few watches – they realized that women might actually like exotic watches.” 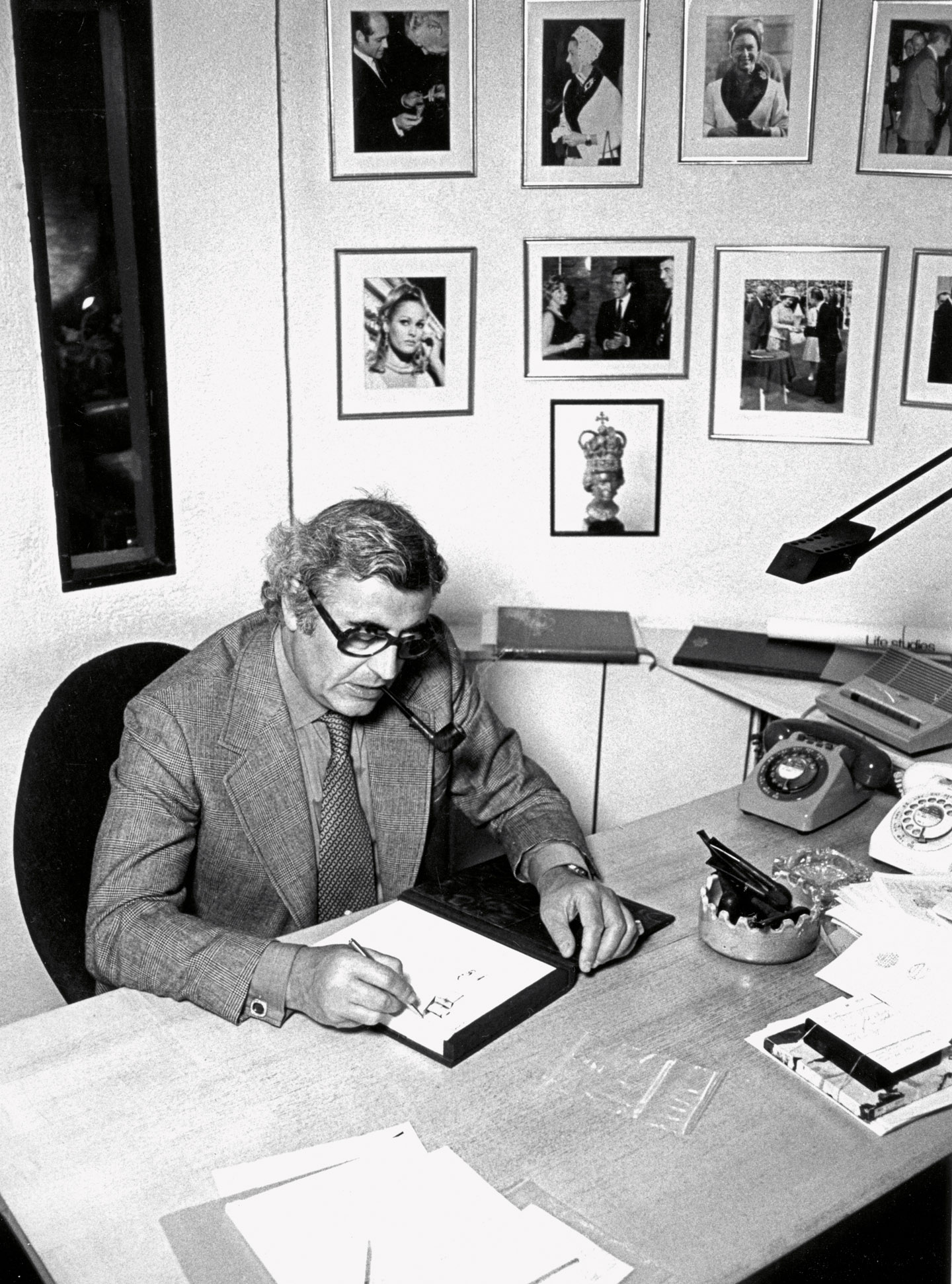 The watches were handmade in the Grima workshop using a brass block to represent the Omega movement. This avoided the problem of it getting clogged with dirt and gold filings. When the watch cases were completed, a few goldsmiths would travel from London to the Omega headquarters and fit the movements with the aid of the Swiss watchmakers. Everything about the process was unique; the designs, the stones, and the artisanship. As Andrew Grima explained to the press, only the best would do:

“These watches might be some of the last examples of this type of craftsmanship. I mean it’s vanished already in America and even in Britain, we could not have produced such a collection without calling in craftsmen from all over Europe, from Austria, Holland, Germany, Sweden, Czechoslovakia, and Switzerland. We had to comb Europe for the right people because we couldn’t find enough craftsmen in England to cope with a million-pound commission of this magnitude.” 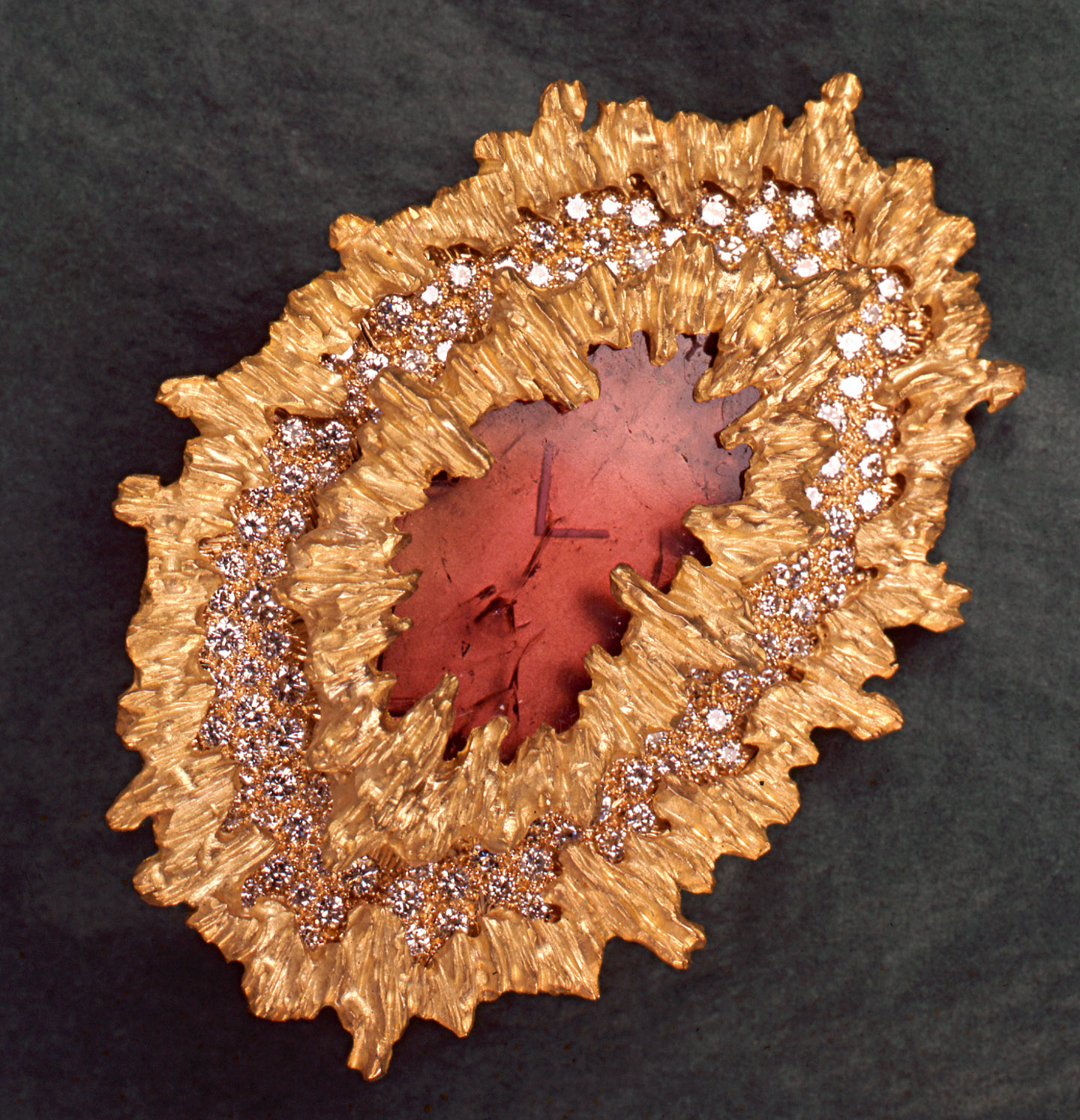 Precious and semi-precious stones were used to make the watch glasses, including rock crystal, moonstone, smoky quartz, rutilated quartz, aquamarine, citrine, peridot, and green and pink tourmaline. These were supplied by Gustav Caesar of Idar-Oberstein, who brought in special cutters to create the unusual and innovative shapes and sizes. The stonecutters had no clue as to the end purpose of these strange commissions that ostensibly decimated the value of the materials being used and, to be fair, they did not ask:

“Because the project was a secret we didn’t want the cutters to know that the stones were for watches, so when we told them that it was imperative to see through them and that the stones had to be a certain thickness they just thought that we were rich English eccentrics because we kept insisting on these impossible specifications.”

The collection – launched at Goldsmiths’ Hall in London on May 4, 1970 – caused a sensation. The three-day public showing, attended by Princess Anne, was followed by a fortnight in the Round Room basement of Andrew Grima’s gallery in Jermyn Street. Both exhibitions generated teeming crowds and extensive press coverage. Prices ranged between £660 and £7,500 which was a great deal of money at the time (£7,000 would have bought you a small Ferrari!), but over half the pieces sold during the first London showing, mainly to overseas customers. 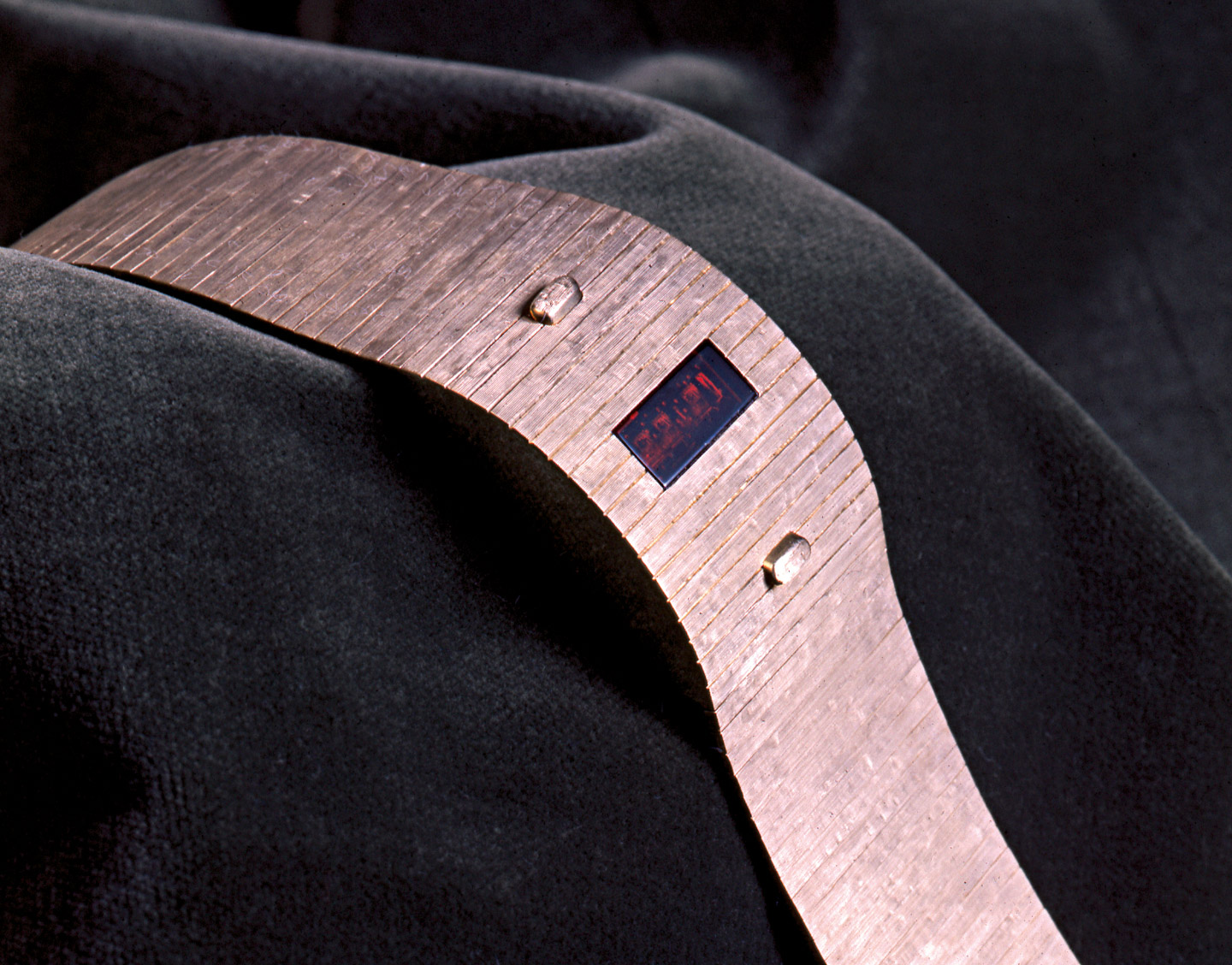 Shortly after the London launch, Omega decided to take the About Time exhibition to the Swiss Pavilion at Expo ’70 in Osaka. The collection was then presented to the trade at the Château de Chillon on Lake Geneva, where Ursula Andress was presented with a ring watch specially commissioned for her by Omega. Over the next four years, About Time was exhibited in every major city in the world. A handful of the pieces were replicated, but even these were limited to one per continent. Otherwise, as each piece was sold, it was replaced by a new design, thus preserving the uniqueness of the collection.

Omega viewed the collaboration with Grima as transformational to the development of its watch ranges, as this excerpt from their 1972 sales guide demonstrates:

“He added new dimensions to jewelry watches. And these models have been exhibited with immense success in the capital cities of the world. Grima’s watches are the boldest and highest expression of our jewelry collection; they have opened new horizons for us, and their influence is felt even on our most ‘commercial’ models.” 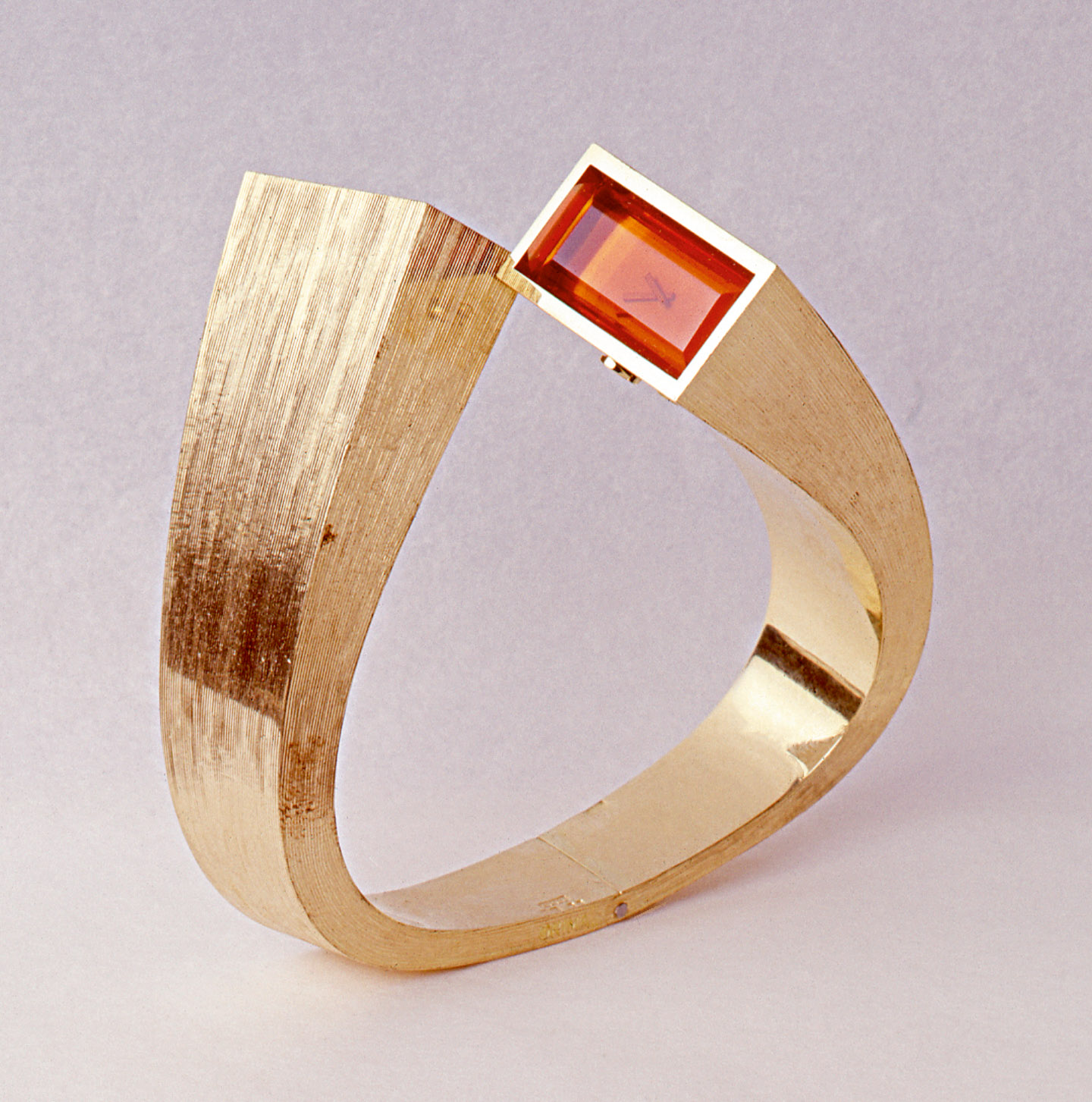 Grima’s collaboration with Omega was the most challenging but also the most rewarding phase of his career. The resulting About Time collection was the ultimate expression of his genius, eclipsing anything he achieved before or since. As journalist Anna Motson wrote at the time:

“It was…. a collection above the tides of fashion, a collection that would be a work of art in its own right. But the significance of the Grima collection goes even further. In turning the watch into a jewel, Grima hit on a simple yet brilliant idea, the substitution of a precious or semi-precious stone for each watch glass. It is this revolutionary idea of seeing time through stones that not only forms the unifying theme of the About Time collection but also ensures Andrew Grima his place in the history of the watch.” 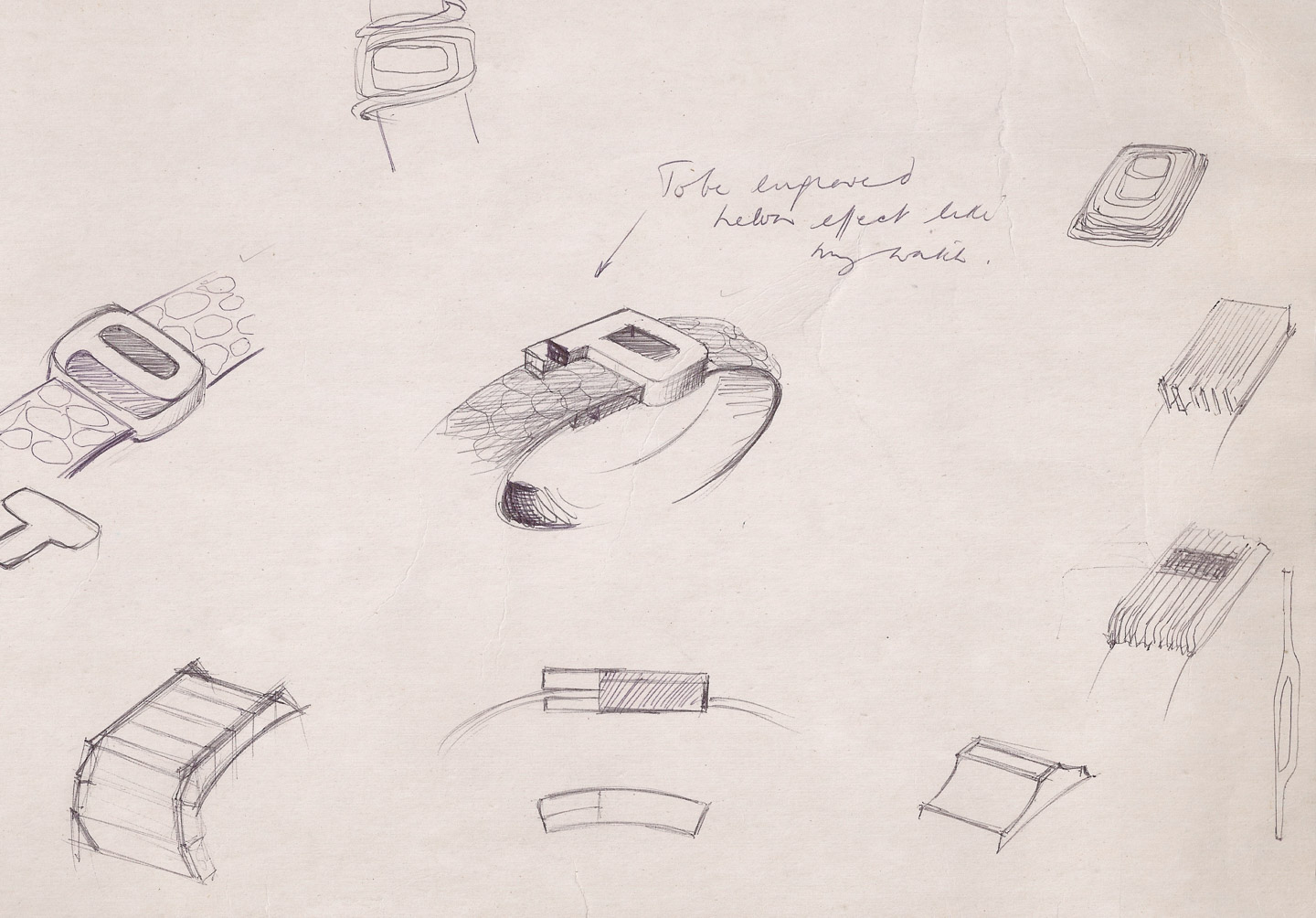 Andrew Grima designed a second watch collection in the mid-1970s for Hamilton Watch Company’s Pulsar brand which pioneered the digital electronic watch. Again, Robert Forster was the instigator: he had left Omega to join the Hamilton Watch Company and approached Grima with a commission to work on 18k gold versions of a digital LED watch. Hamilton’s Pulsar division had developed the first digital electronic watch in 1972 after John Bergey, the head of Pulsar, took inspiration from the digital clock Hamilton had made for the 1968 science fiction film 2001: A Space Odyssey.

The prototype was developed in 1970, but the first commercial Pulsar digital watch was the P1 – a limited edition cased in 18k gold, which retailed for $2,100 when it came onto the market in 1972. P1s are extremely rare today, as only 400 were made and many are presumed to have perished during the gold-melting frenzy of 1979 to 1980 when the price of bullion surged past $800 per ounce. The Grima Pulsar collection was launched at Goldsmiths’ Hall in 1976 as an attempt to underpin the brand’s premium positioning at a time when competitors such as Texas Instruments and Casio were churning out digital watches for $20–30 apiece. 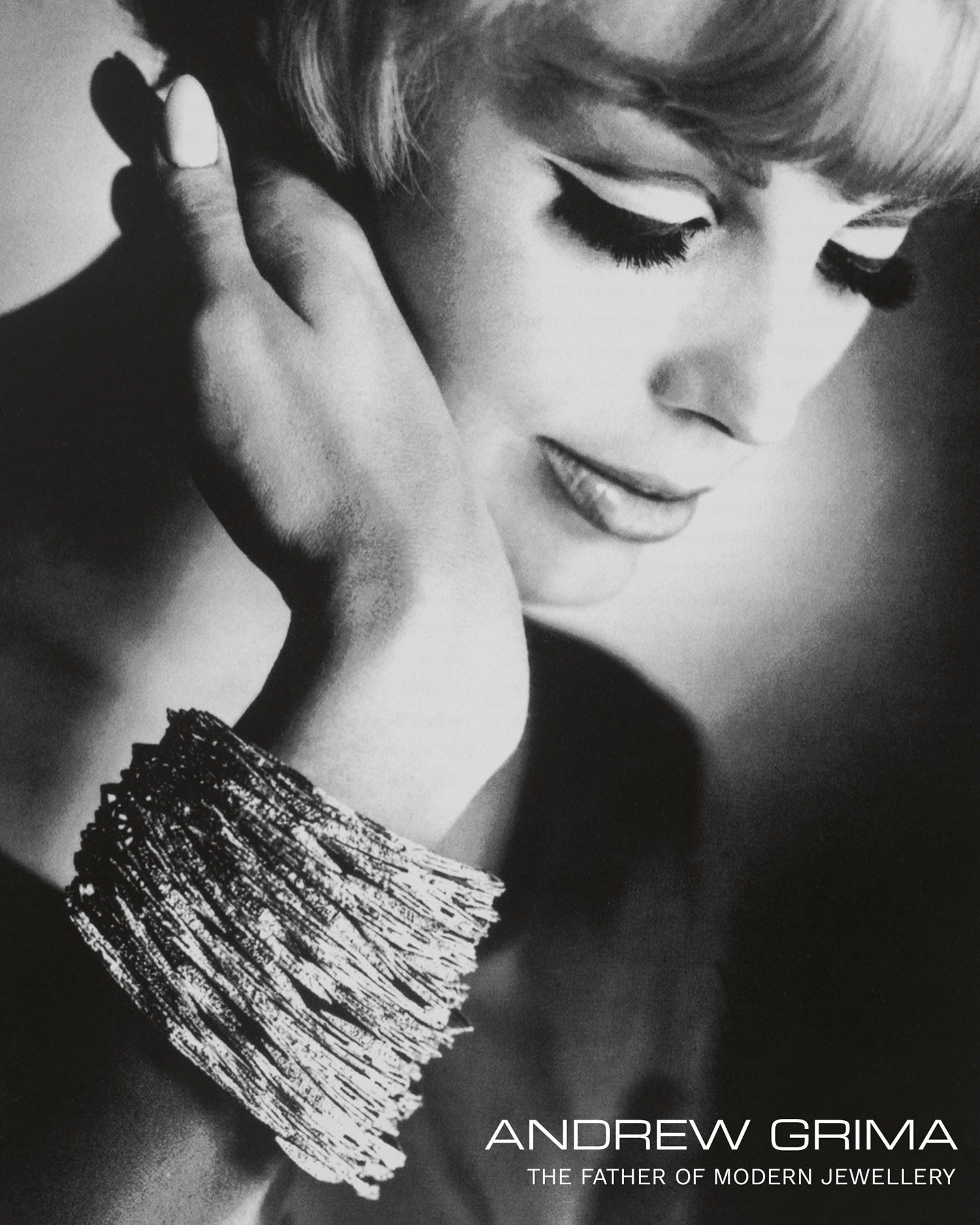 Pulsar would stop manufacturing watches by 1977, but the Grima versions were, nevertheless, a wonderful swansong. The Pulsar collection comprised 30 or so unique wrist, pendant, and pocket watches for men and women, handmade by Grima craftspeople. In stark contrast to the Omega collection, the style was predominantly clean and symmetrical — a very un-Grima-like trait but appropriate given the space-age technology involved.

Priced at $85 USD, Andrew Grima: The Father of Modern Jewellery, by William Grant, is available to pre-order on Amazon here.