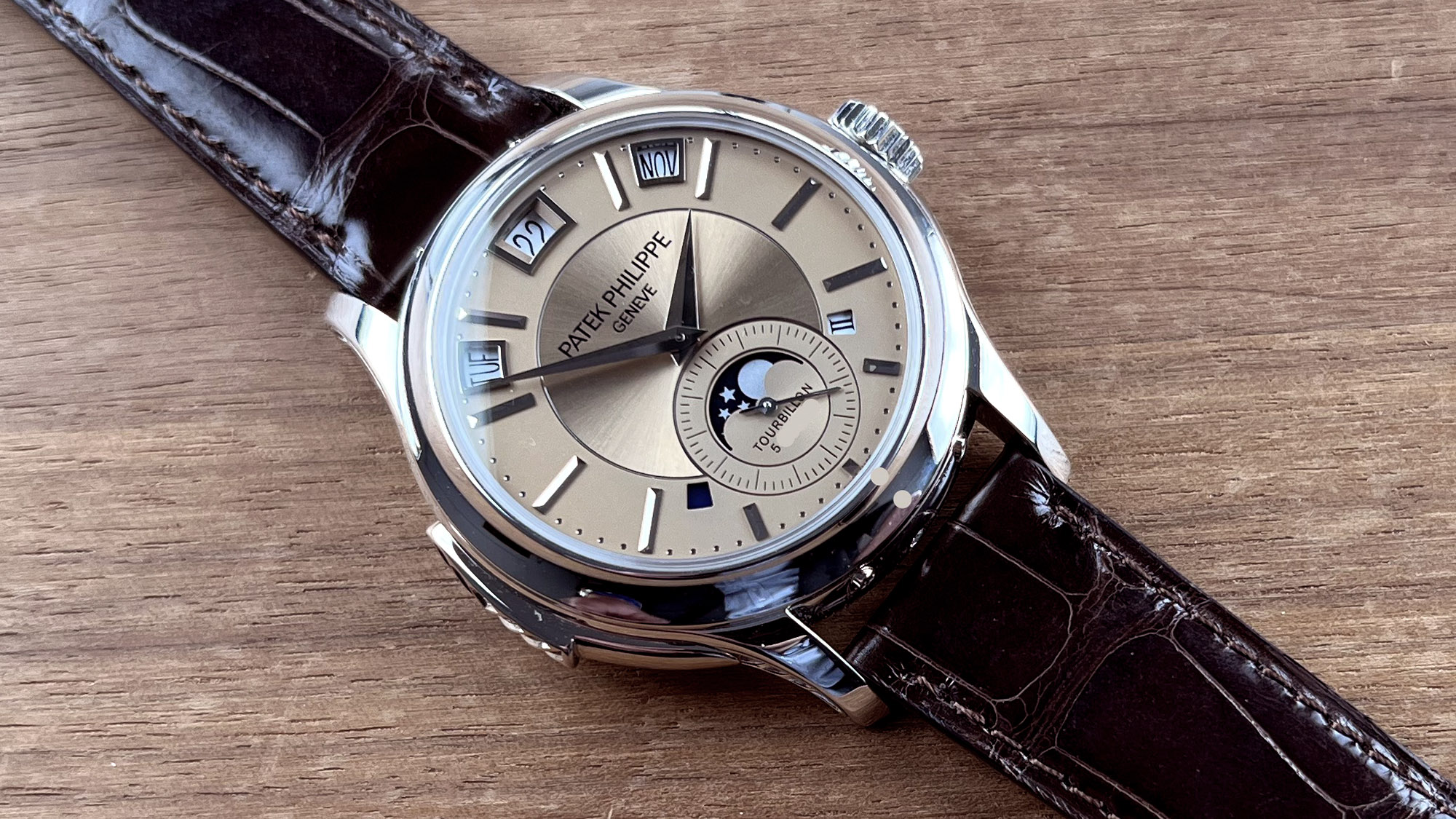 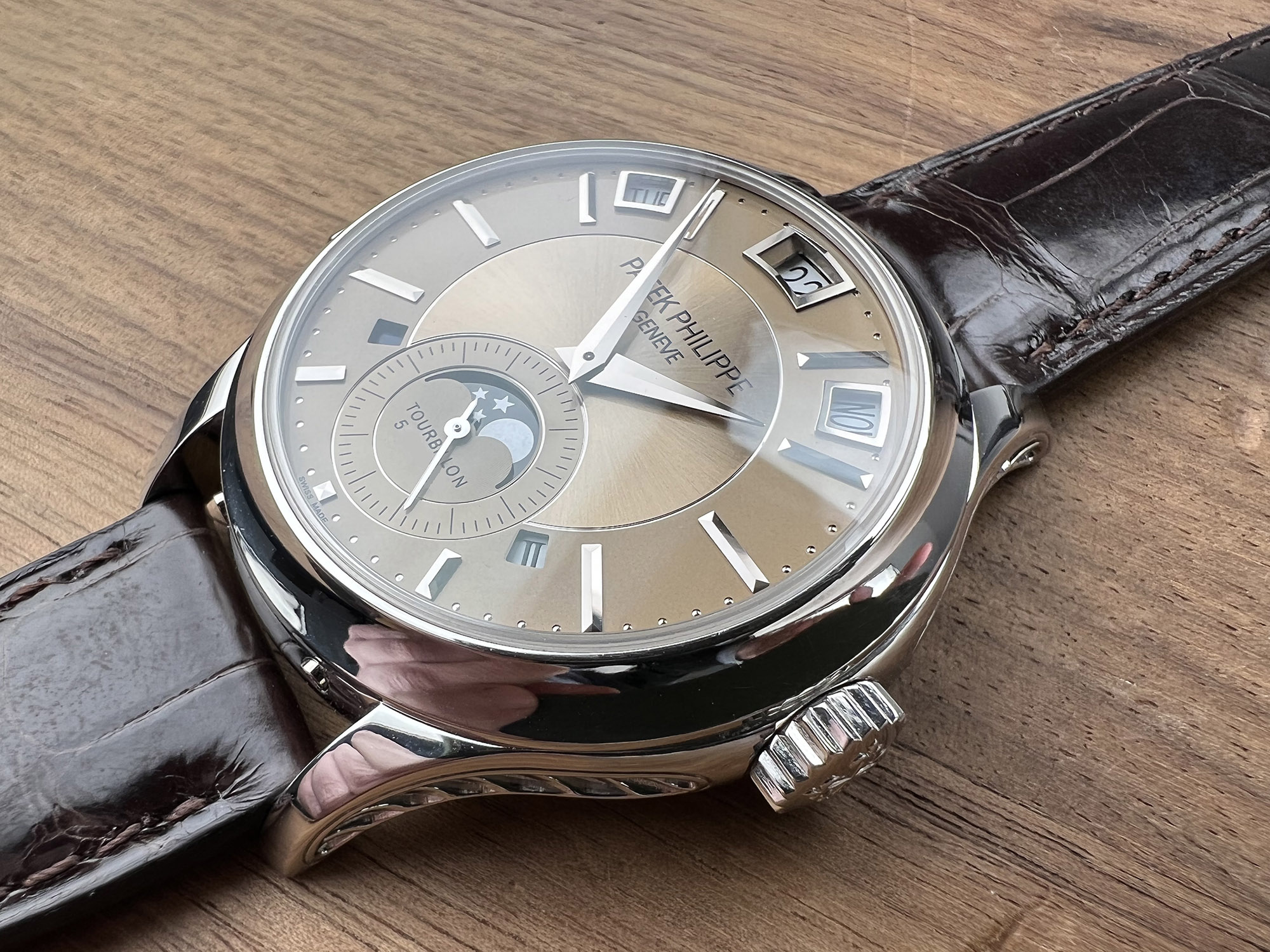 Editor’s Note: Following the success of our ongoing weekly editorial columns, the aBlogtoWatch team is opening up its popular Monday column format to leading figures and insightful voices from across the industry and the watch enthusiast space. First up in our new series of aBlogtoWatch Guest Columns is Tim Mosso, a longtime industry veteran who currently works as the Director of Media and Watch Specialist for leading pre-owned luxury watch sales platform WatchBox. We hope you enjoy these new and informative features as much as we do. – Sean Lorentzen

The Patek Philippe 5207P is a smart watch. To be clear, it’s not a smartwatch, but Patek Philippe’s 41mm platinum marvel is an extremely smart watch. It understands the Gregorian calendar better than you do. It can memorize the phases of the moon for 122 years. It’s clever enough to read and chime the time if you’re pressed for lighting. In addition, its caseback tourbillon regulator is smart enough to keep chronometer-grade tabs on the time. As with many standout intellects, the 5207P boasts a legacy of high achievers. 1993’s reference 5016 was the first Patek Philippe wristwatch to combine a perpetual calendar, a tourbillon, and a minute repeater. The 5016’s diminutive 36.5mm diameter marks that pioneer as a product of another era, but the precedent it set leads directly to the 5207 series. 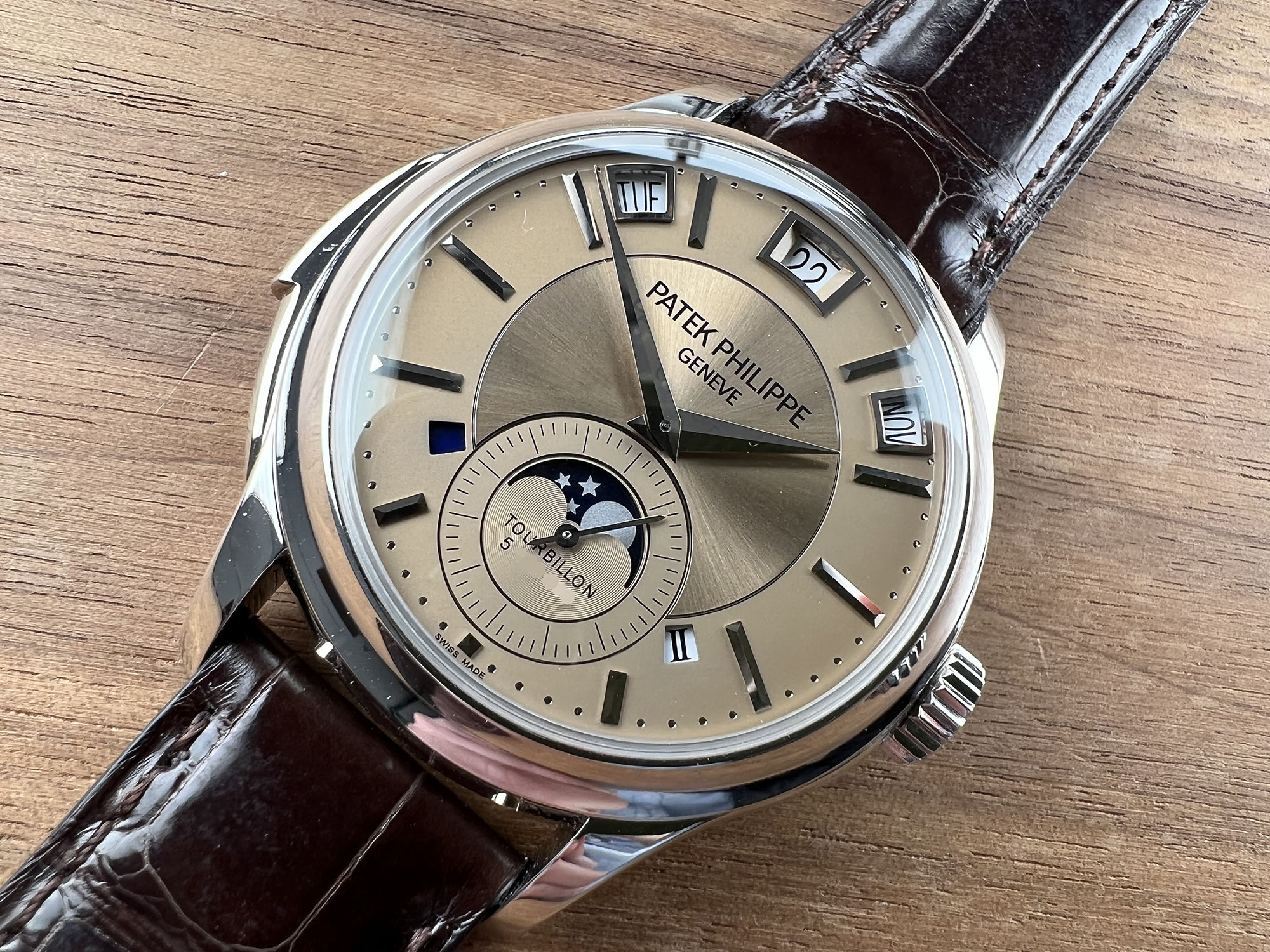 Baselworld 2008 was the overheated watch industry’s last outburst of 2000s exuberance. In that era of junk bonds and junk mortgages, watch size, complexity, and price were king. The Patek Philippe 5207P had all three. To be fair, the 41mm case was nothing special in an epoch of 48-50mm aberrations, but the Patek’s brick-of-platinum mass, immense 51mm+ lug-to-lug span, and imposing presence create the impression of a monster machine. The 5207P’s complexity was the equal of any contemporary. 557 precision pieces labored in concert within the manual-wind machine. Despite the marquee value of its minute repeater and tourbillon, the 5207P’s headlining innovation was an instantaneous jumping perpetual calendar. Despite its formidable history of perpetual calendars, Patek Philippe had never offered a series-production wristwatch with anything but a “dragging” or progressive-change calendar system. 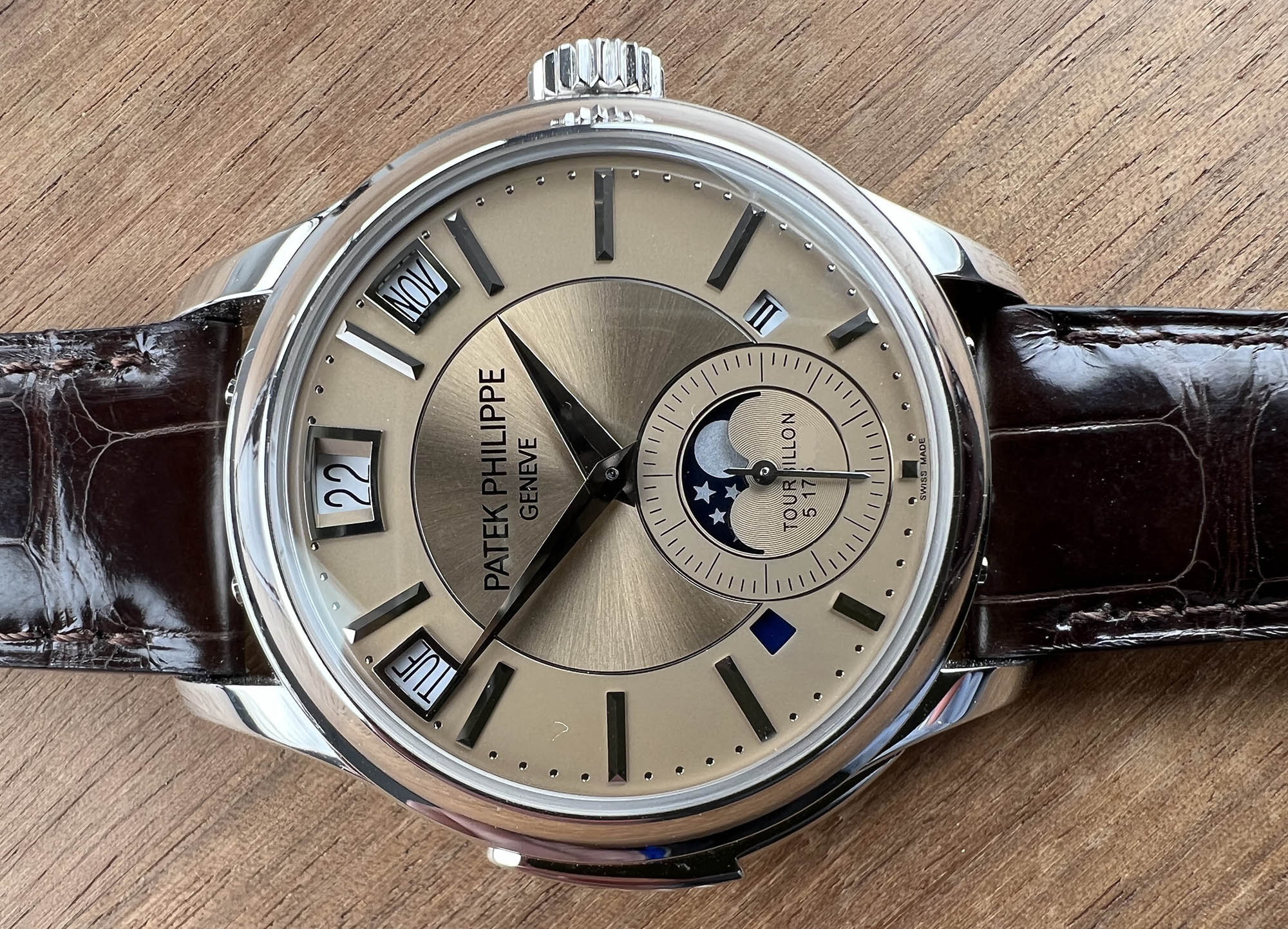 In contrast, the 5207P features a set of calendar displays that snap like a bear trap. To be fair, truly instantaneous complex calendar jumps are the realm of electronic watches, and the Patek’s advertised claim is a jump of all indicators within two minutes of midnight. Theoretically, the watch can coordinate a jump of day, date, month, moon phase, and leap year as the hour and minute hands overlap. Moreover, the ambition of the 5207P expands through the employment of aperture-style displays. Calendar discs require more energy than hands, and jumping displays draw more energy than progressive ones. Combine the two, and the sprawling 425mm mainspring’s rationale becomes self-evident. Given two power-intensive complications in the calendar and tourbillon, this watch’s 48-hour power reserve is a standout achievement. 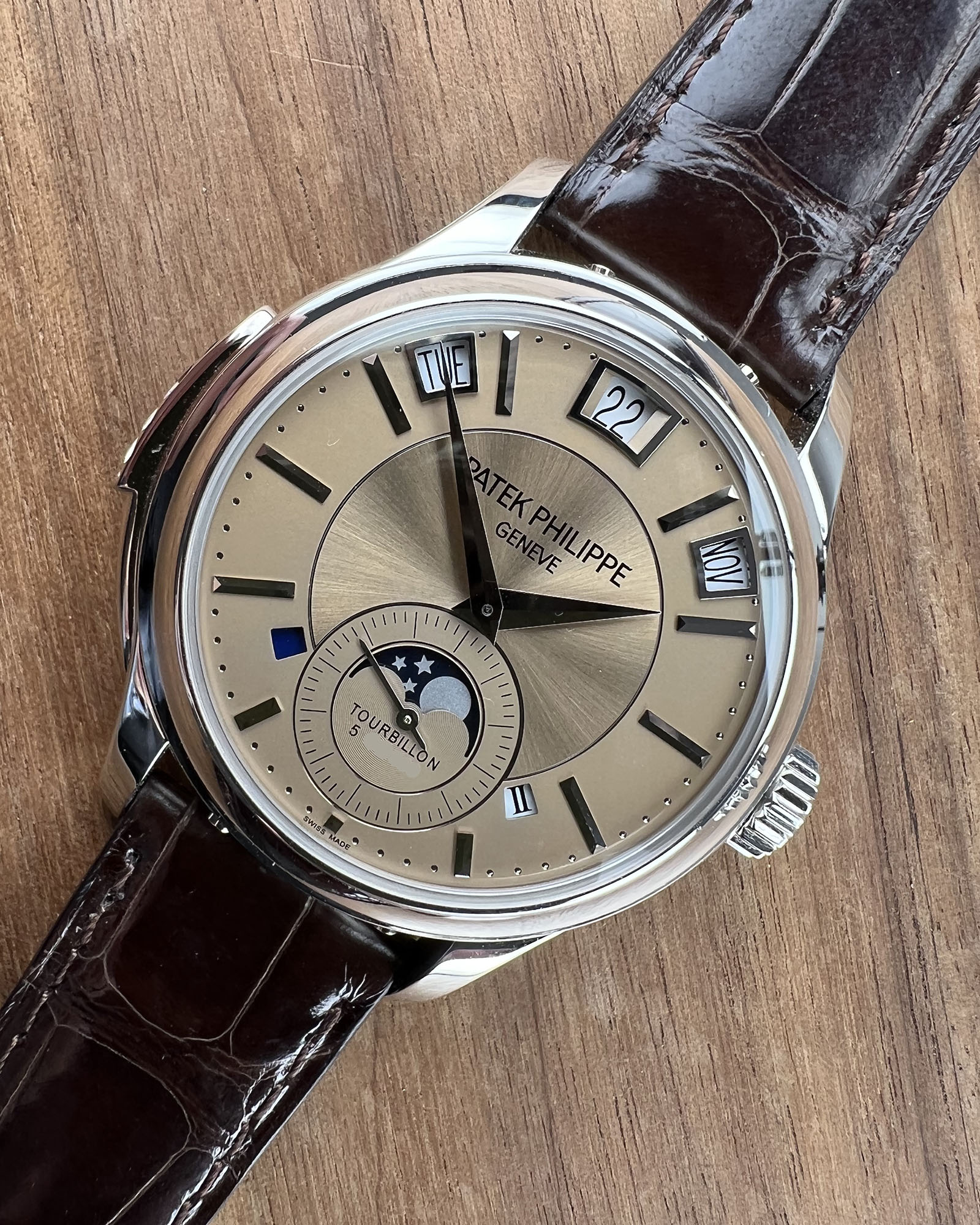 Topside, the 5207P is a balance of grace and bombast. Its dial, a metallic sunburst in a galvanized color Patek describes as “honey,” is crafted from a solid disc of 18K gold. The unseen precious metal reflects a commitment to subtle opulence that mirrors the caseback-only tourbillon. The center dial pops with metallic sunburst graining, and the hour track glows softly with a frosted finish Patek dubs “opaline.” Combine the two, and the look is both “honey” and “money.” The overall dial balance is outstanding. Calendar indicators, moonphase, and AM/PM window are deployed in a fashion that creates bilateral symmetry; each side mirrors the other. Not only is the aperture calendar technically impressive, but it’s easier to read than common perpetual calendars with pointer-based sub-registers. The vaulted display of day, date, and month is often described as an “American” calendar, and its windows are garnished with polished white gold frames. Faceted 18k-gold hands and hour indices are finished to a flawless standard of detail, and a glowing ring of metallic “dimples” permits precise reading of minutes. 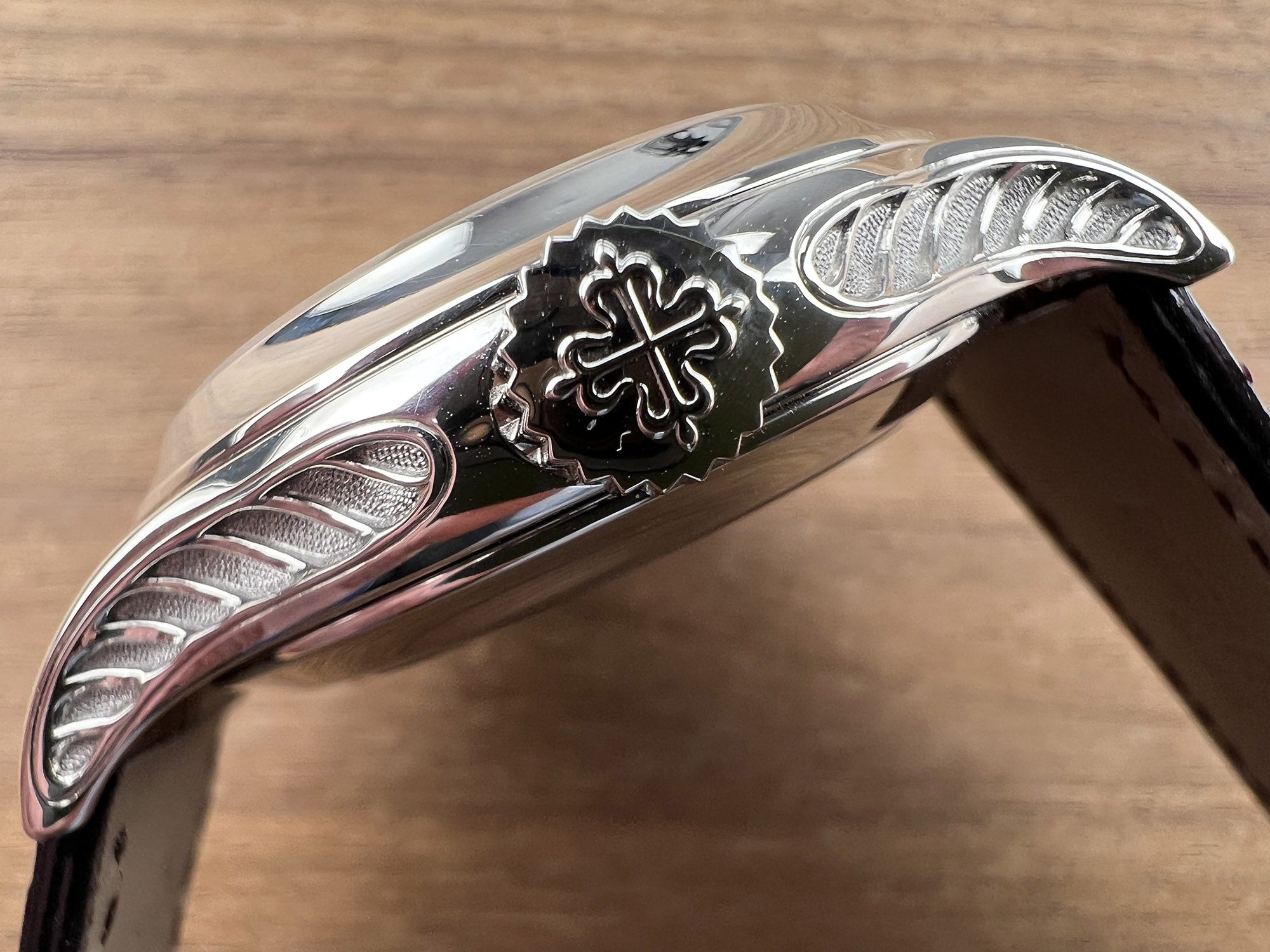 Patek Philippe case manufacturing began in earnest with its Ateliers Réunis acquisition in the mid-1970s. Patek’s decades of lessons learned building its own canisters come to the fore in the 5207P. The company’s favorite slimming trick, a concave bezel, leads the line of refinements. Tapered lugs of generous span define the extremities of the shape. Hired-gun case ace Jean-Pierre Hagmann’s minute repeater slide channel is present and correct. But the case’s showstopper is its combination of engraved flanks with hammered recesses. The sculpted depth of the watch’s sides astounds with its intricacy and nuance. These evacuations have naturalistic overtones that evoke the gills of a shark, the petals of a flower, and the roll of ocean waves — all at once. The forms are mesmerizing and stagger the imagination; each platinum case risks a total write-off if these manual decorations err in the slightest. Within the watch industry, platinum has a toxic reputation for its tendency to destroy tools and push craftsmen to their breaking points. Compared with any other metal save tantalum, platinum deforms, overheats, runs, and smears in a way other materials do not. Consider the multiplicity of repeating watches offered by Patek, and then consider how few platinum models of any description use case sculpting like the 5207P. Minute repeaters predominate! 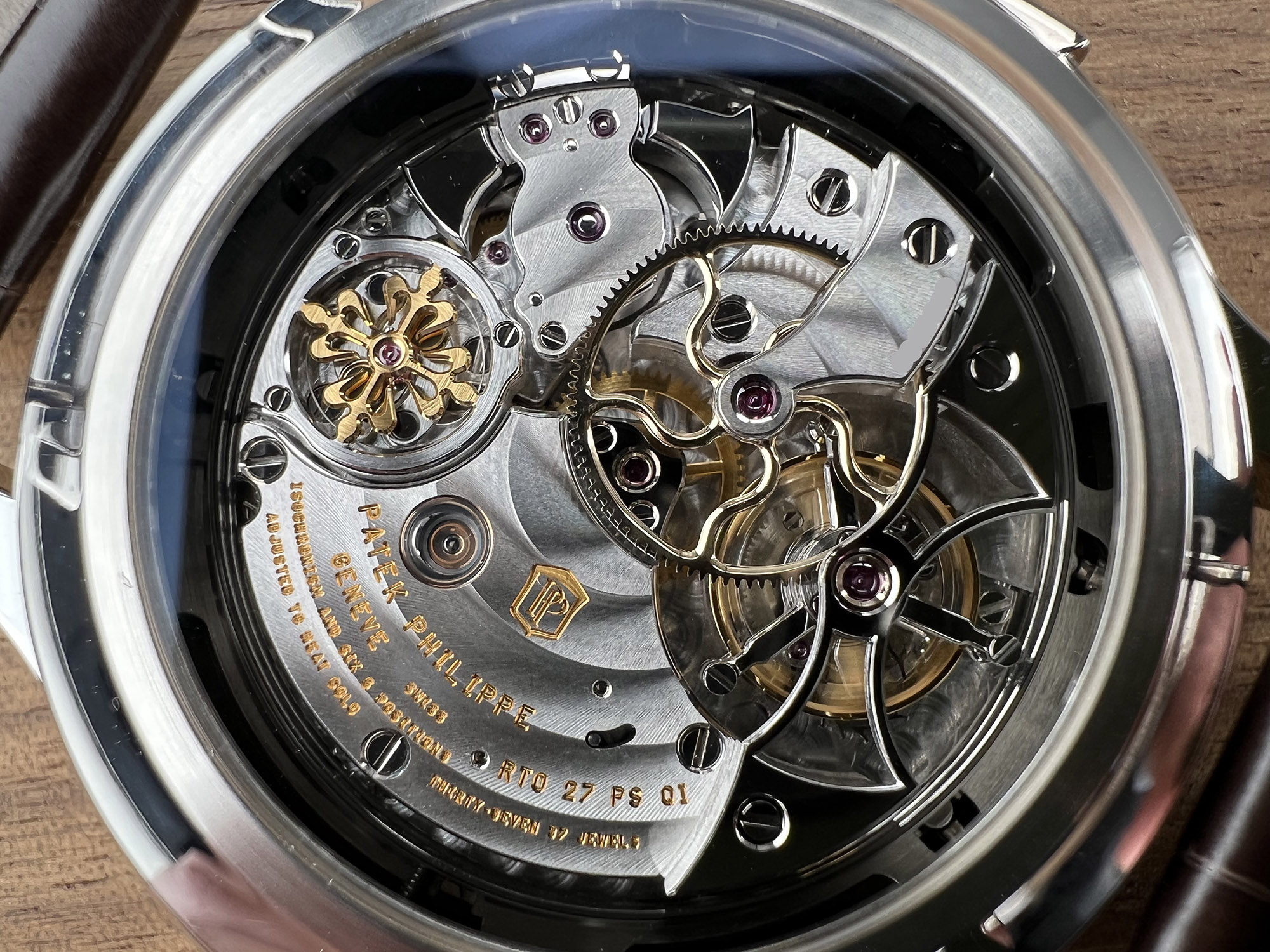 A Mensa-grade watch deserves a movement to match. Even in name, the caliber RTO 27 PS QI is an imposing thing. That eye-exam of a name expresses – en français – the size of the caliber’s core and its functions. While the movement’s roots lie in the early 1990s, the addition of an instant calendar brings it up to 21st-century standards. Frankly, no core-caliber refinements were necessary because the existing base mechanism is a staggering achievement. Like many of its high-horology peers, Patek Philippe reserves its highest standard of finish and manual movement detailing for flagship models. With a new retail price between $800,000 and $1,000,000 depending on year and model, every version of the 5207 qualifies as a “flagship.” The first version of this movement bowed in 1993, and it remains the basis for an extremely smart watch. Early versions of the 5207P even boasted an advanced degree of sorts: a C.O.S.C. chronometer certificate. The initial series also featured Poinçon de Genève signatures attesting to an elite standard of finish rendered within the city or canton of Geneva. Movements built after roughly July of 2009 feature the Patek Philippe seal and no chronometer grading, but quality and precision are unchanged from earlier examples. 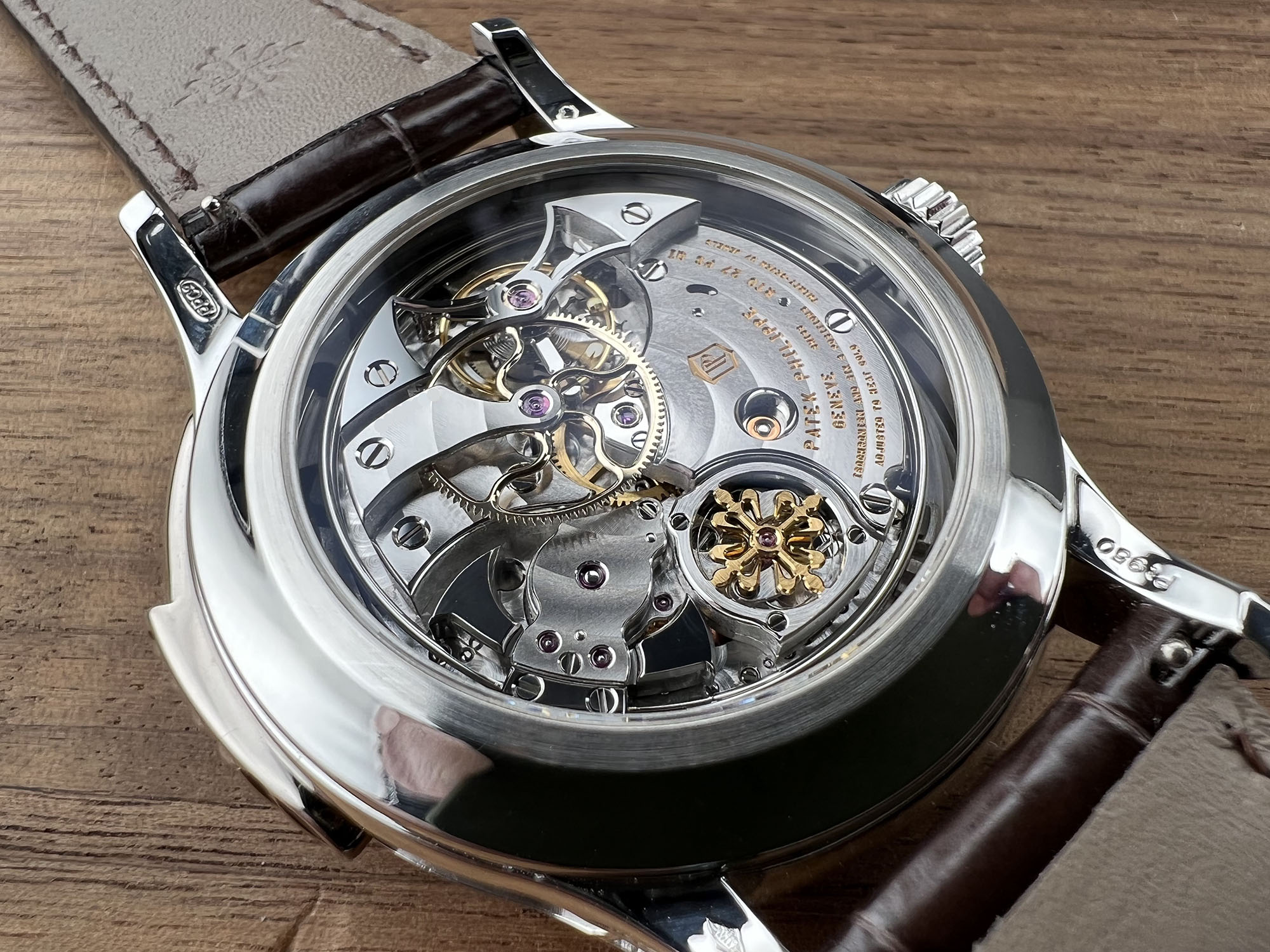 The fine finish starts with the standout third wheel in 14K gold — the grade of gold generally used for mechanical applications inside watches. Though described as an “octopus” wheel by Patek collectors, the wheel has only five spokes. Its true inspiration is the wheel of a traditional watchmaker’s topping/rounding-up tool. The gold gear is finished to baroque standards requiring between nine and 11 hours to complete. All stainless steel components of this movement are graced with a specular finish. “Black” polish, as it is known, requires either diamond paste, extremely fine grades of abrasive paper, or a combination of the two to execute. The tourbillon bridge, center wheel cap, screws, and minute repeater strikers feature an optically pure mirrored finish that appears pitch black from most angles, hence the term “black” for this type of polish. 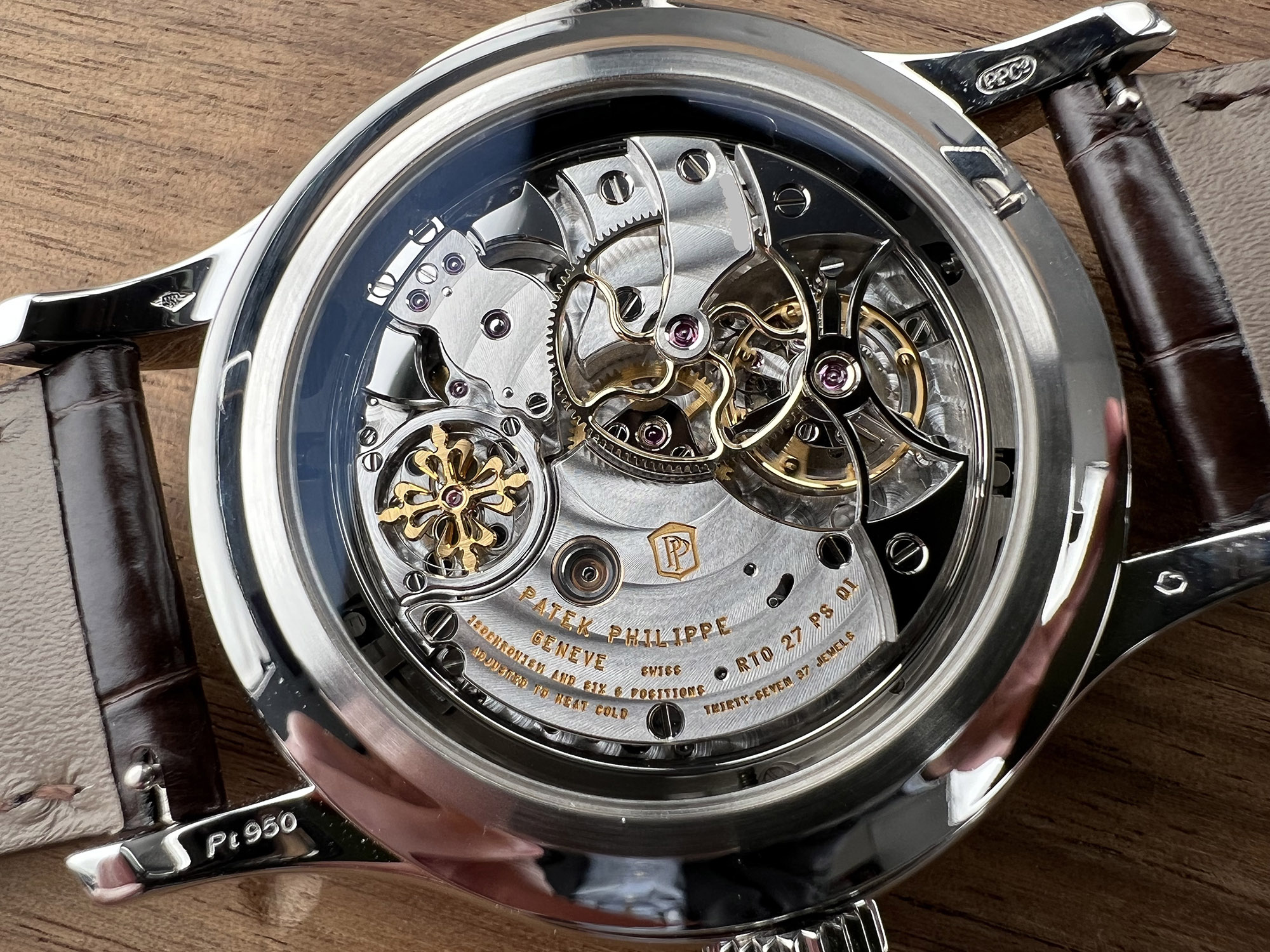 Bevels are a standout. Even the standard brass bridges include lavishly rounded and blazingly bright shoulders. There are no telltale milling marks, and — even under magnification — the chamfer profiles retain no evidence of machine involvement. Unlike hybrid bevels, which are started by milling tools and polished with a hand-held buffer on a power tool, the RTO 27 PS QI’s anglage doesn’t read as polished flat planes. This is what an artisan can achieve when time is no object and production volume is irrelevant. Inward angles where bevels meet exhibit the hallmarks of exacting standards. Merely “rounded” junctions where two chamfers merge are common even in watches priced above $100,000. A sharp crease where chamfers collide is considered the gold standard for this type of joint, and it defies mass production. Many movements bearing the “Geneva hallmark” feature exactly zero examples of inward angles. The Patek 5207’s guts sport at least nine: eight reside within the steel upper bridge of the tourbillon, and one crease looms on the half-bridge for the gold third wheel. 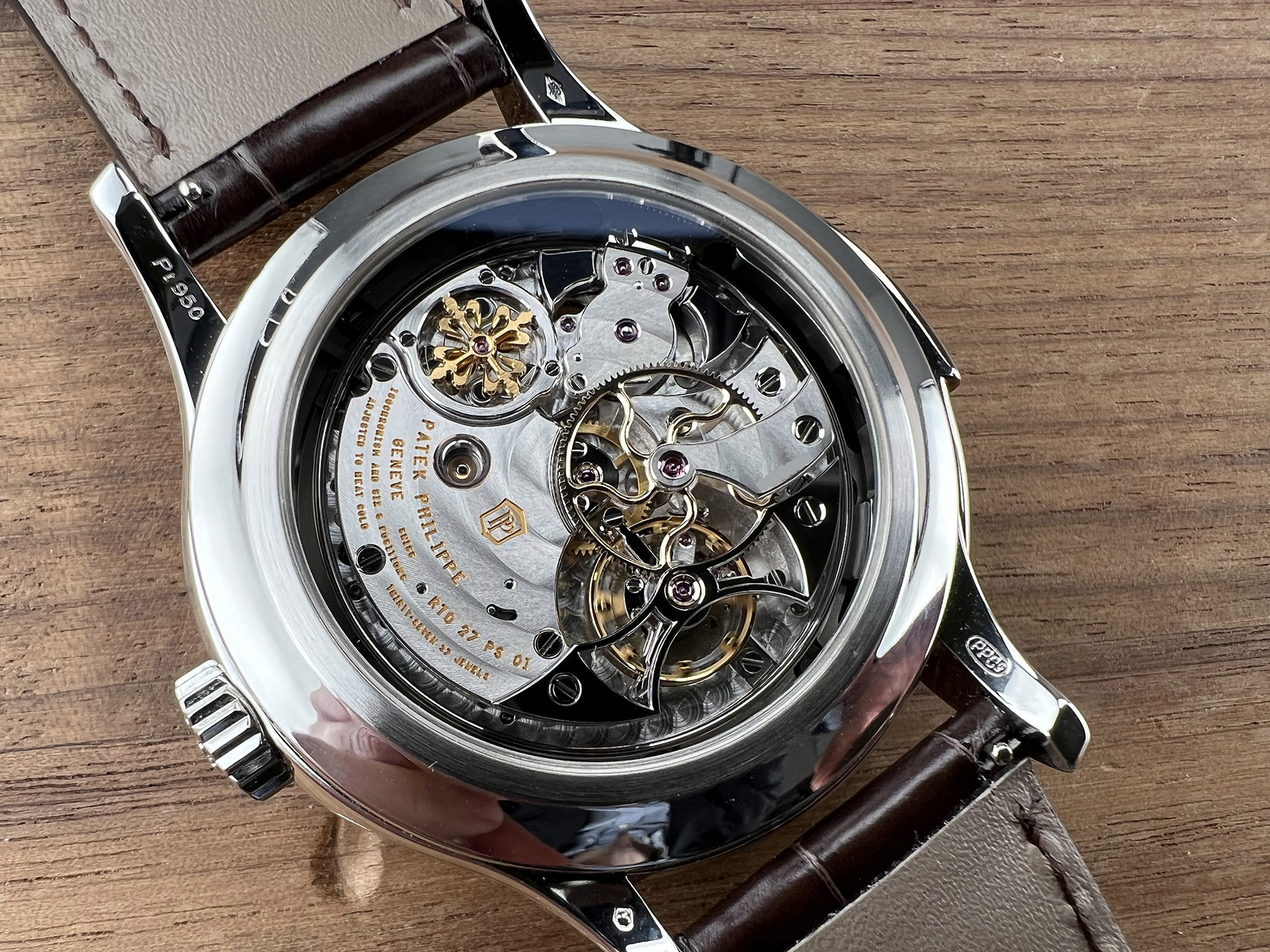 “Exterior” points are formed where two bevels converge in a sharp tip; they’re as relevant to the collector as inward creases. The RTO 27 PS QI includes several tapered points on the tourbillon bridge and the repeater strikers. Each of these structures is fashioned from steel, and that complicates further the process of decoration as steel is more challenging to finish than brass. Patek’s only obviously cut corner (pun intended) is the gold Calatrava cross that covers the centrifugal governor for the repeater. The edges of this gilded Patek Philippe logo are straighter and more clearly machine-milled than the rounded gleam of the other bridges. These aren’t artisanal bevels, but the limited space for tool ingress likely forced this compromise.

Although Patek Philippe dabbled in pocket watch trials and wristwatch tourbillon regulators for decades, regular production of such watches did not accelerate until the early 1990s. As with most Patek tourbillon watches prior to the 5303R of 2019, the rotating escapement of the 5207P is visible only from the reverse of the watch. Patek has justified this decision by various means including conservative modesty, tradition, and protection of lubricants from UV light exposure. Regardless, owners of this watch have one more reason to put the caseback on display among friends. And for those who desire even greater discretion, the 5207P ships from Patek with an alternate solid platinum caseback that can be installed on request. 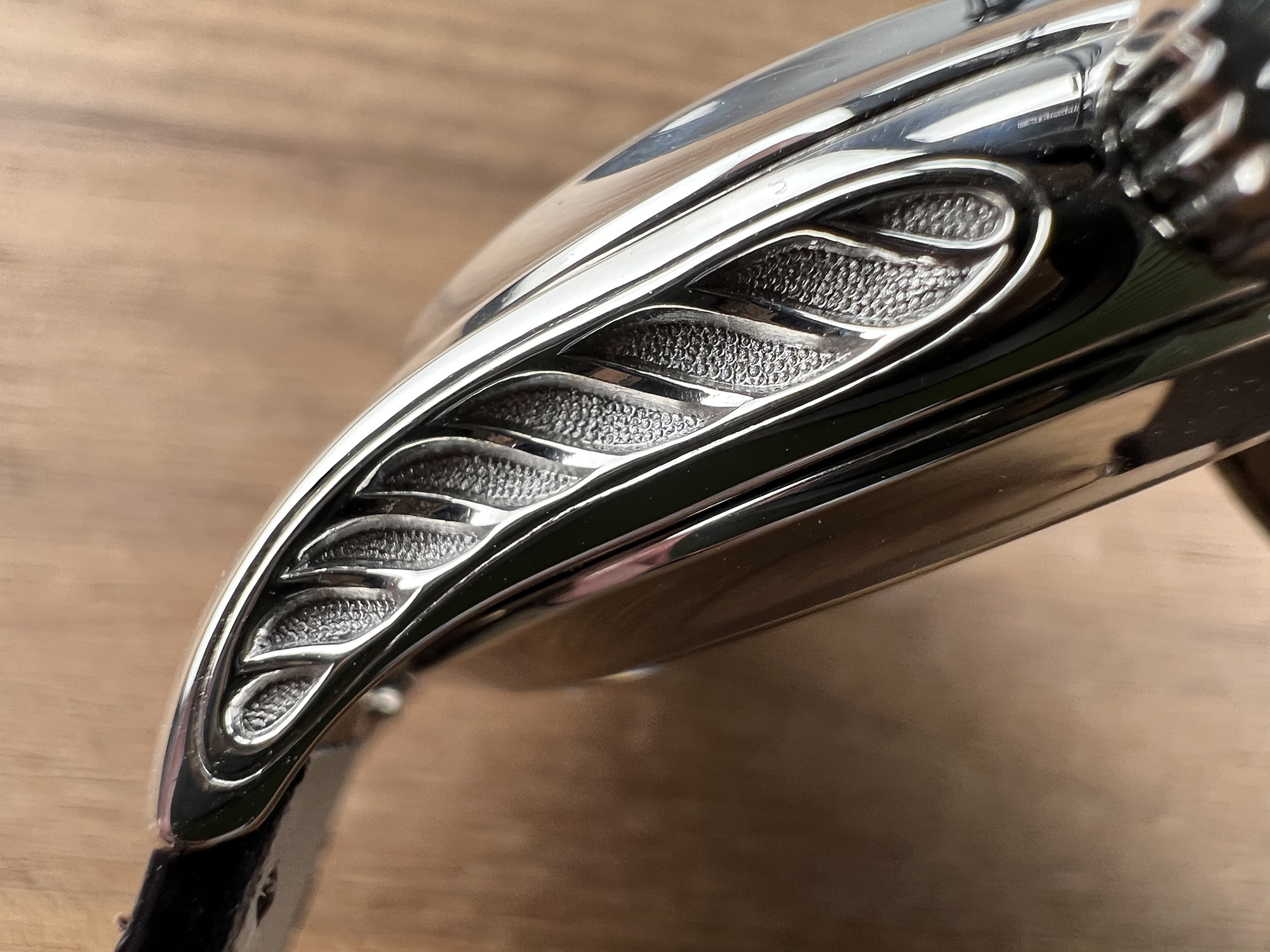 Today’s luxury watch landscape groans with monstrously priced watches, bewildering complications, and extravagant designs screaming to be noticed. No company – even Patek Philippe – dominates the peak of the market the way Audemars Piguet, Gérald Genta, and Patek itself did thirty years ago. But heritage, tradition, and continuity are beyond easy reach to even the most ambitious upstarts — virtues of experience require time to acquire. Six years ago, I was the guest of a vaunted independent watch brand on the cusp of superstardom. Awaiting molten curds in a Geneva fondue joint, one of the company officers proudly shared his cellphone gallery of prized art, autos, and watches acquired as long-term investments. The crown jewel of his collection wasn’t from his house brand — it was a 5207P. It was both a smart watch and a smart choice.