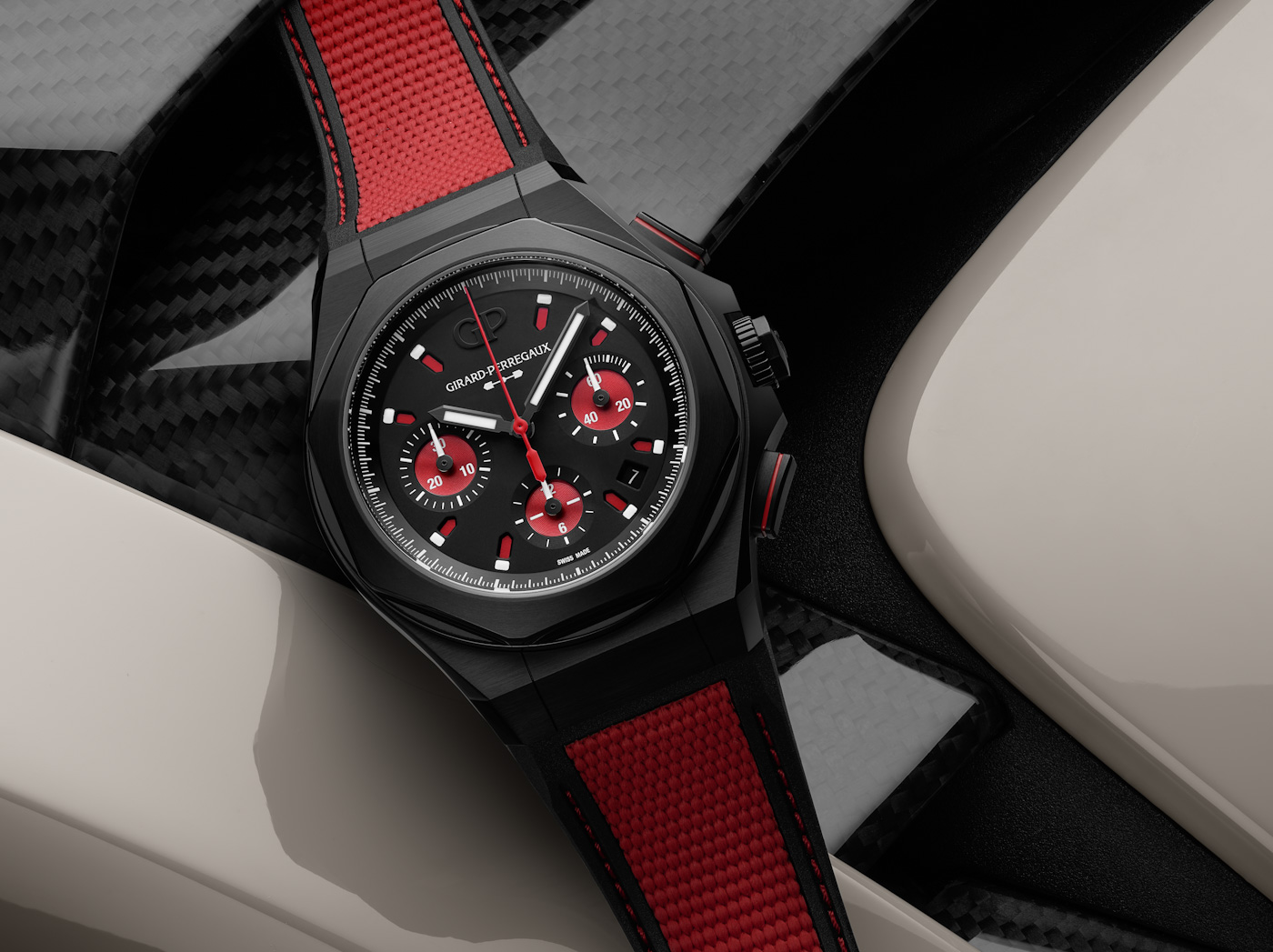 As part of its official partnership with the Festival Automobile in Paris, Girard-Perregaux has launched the limited-edition Laureato Absolute Passion chronograph. Limited to just 50 pieces, the new timepiece features a 44mm faceted case and is set on a black PVD treatment with touches of red, giving an ultra-modern sporting appearance to the Laureato that calls to mind interiors from Ferrari and Lamborghini while helping to slim down the case profile on the wrist. Although it might look more compact, it certainly doesn’t hide on the wrist thanks to a unique bright red strap. The new model retails for $13,400. For more information, check out the brand’s website.

As part of its first major new model debut of 2020, Hamilton revitalizes the dressy, movement-focused Jazzmaster lineup with a series of new iterations for both men and women. The women’s Jazzmaster Open Heart 36 takes the ornate, oversized open heart window found in the men’s Jazzmaster line and downsizes it to a more delicate 36 mm stainless steel case without compromising the overall essence of the design. The strongly architectural attached lugs remain a standout feature, while the dials have been reimagined with smaller markers and new colors including navy, black sunburst, ice blue, and a standout white mother-of-pearl treatment. The Jazzmaster Open Heart 36 benefits from Swatch Group’s recent advancements in power reserve, with an H-10 automatic movement that offers 80 hours of power along with an antimagnetic Nivachron hairspring. Hamilton offers the Jazzmaster Open Heart 36 on a series of matching quick change strap options, including alligator pattern and ostrich pattern leather along with a five link bracelet. Pricing for the new line starts at $945. 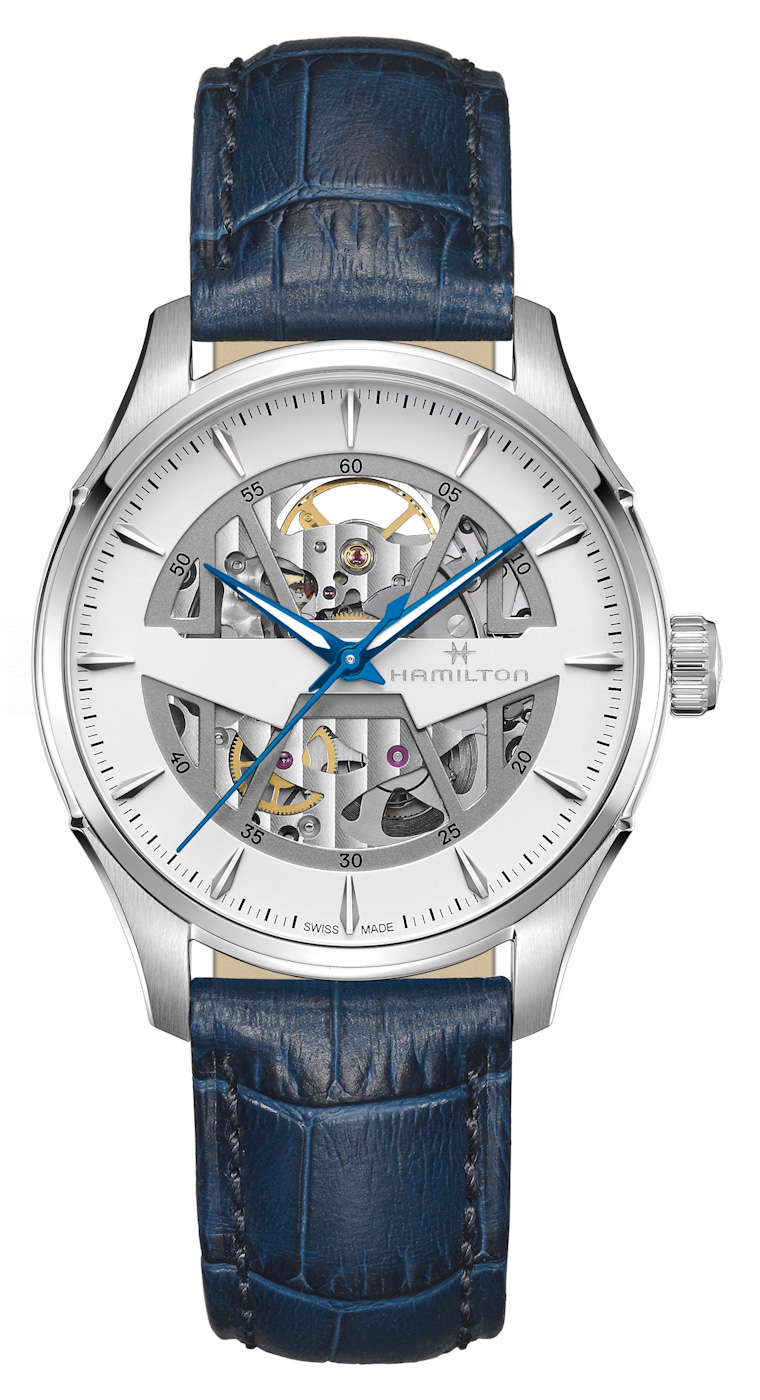 For the men’s Jazzmaster series, Hamilton now takes this concept to its logical conclusion with the new Jazzmaster Skeleton. The 40 mm case keeps them classic Jazzmaster lines in both stainless steel and optional rose gold PVD, while the dial takes on a new and more radical appearance. The dauphine hands remain part of the equation, but the abstract open heart dial cutout has been replaced with a far more ordered, geometric, and futuristic design. The skeleton dial, available in both black and white, interacts with the skeleton bridges underneath in order to form the stylized Hamilton “H” emblem filling the entire skeleton windows. It’s a creative and subtle bit of branding, reinforcing the marque’s core iconography in an organic and visually dynamic way. Part of this design feat comes courtesy of the newly modified H-10S automatic movement, delivering the same impressive 80 hour power reserve while revealing more of its inner workings and adding a generous helping of decoration in the form of Geneva stripes and perlage. Hamilton pairs this more angular design with alligator pattern leather in black, navy, or brown, along with a five link bracelet. The Jazzmaster Skeleton’s MSRP starts at $1,245 . Visit Hamilton’s site for more information. 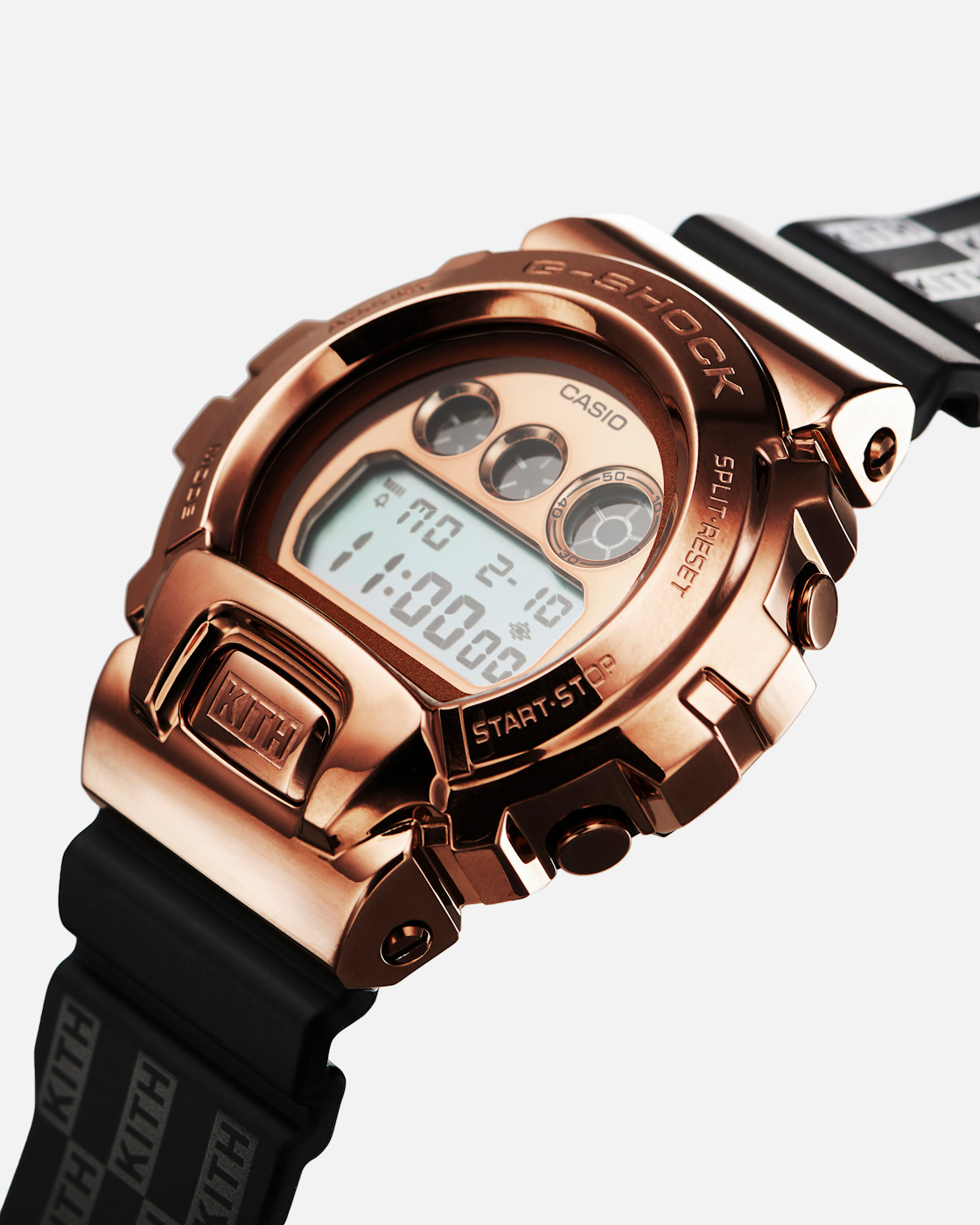 Casio‘s ultra-rugged G-Shock line has added a second collaboration piece with fashion brand Kith that takes the classic G-Shock GM6900 in a new monochrome luxe direction. While the chunky GM6900 shape and digital layout remain unchanged, the whole case and dial ditch the standard black resin for a flashy rose gold tone treatment accented with copper details including the Kith logo at the 6 o’clock pusher. The resin strap, offered as a pair in both black and white, features an all-over print of the Kith logo. Despite the more luxurious finish, Casio claims the G-Shock has lost none of its signature durability. The Kith x G-Shock GM6900 Rose Gold is priced at $380, and will be available from all Kith authorized retailers and the Kith website on Monday, February 10. 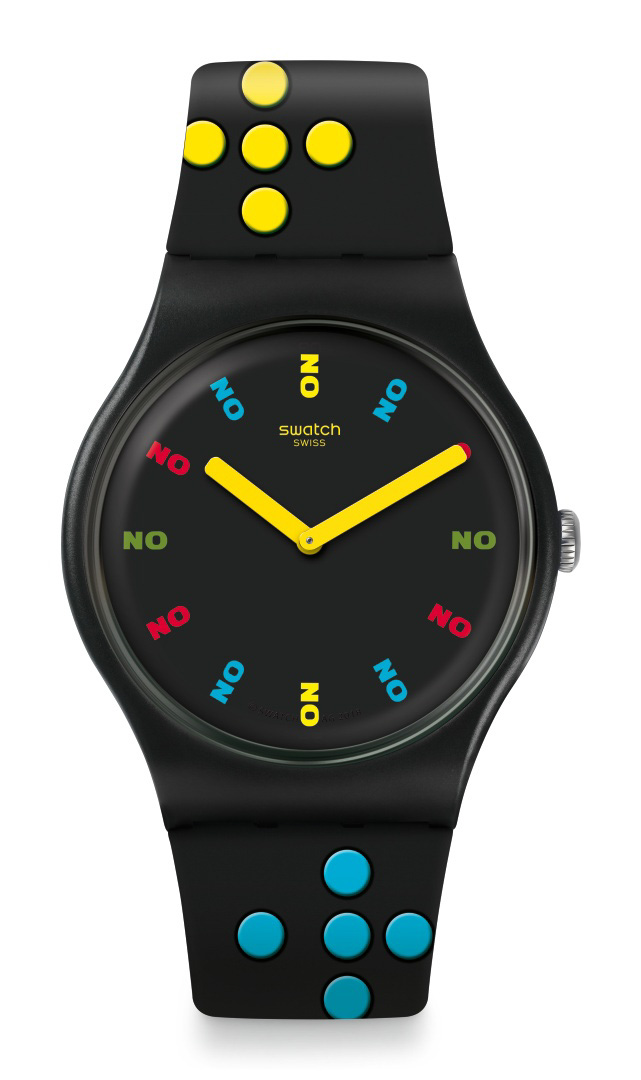 While fictional secret agent James Bond himself famously wears specialty Omega Seamasters, for those on a more modest budget Swatch Group stablemate Swatch offers a touch of the famous spy’s colorful world with the Swatch x 007 collection. Six new models based on films including “Dr. No,” “On Her Majesty’s Secret Service,” “Moonraker,” “License To Kill,” “The World Is Not Enough,” and “Casino Royale” will debut on February 20, taking bold and colorful inspiration from these films’ opening sequences and posters. While these six regular production editions display graphic representations of Bond history (to varying degrees of success,) Swatch has also announced a seventh limited edition model to be unveiled coinciding the release of the latest James Bond film, “No Time To Die,” in early April. This model will be worn on screen by 007’s famous gadget designer Q, and is promised to incorporate some of the character’s spirit of innovation in its design. While pricing and availability of the “No Time To Die” limited edition piece has not yet been announced, the rest of the new releases in the Swatch x 007 collection will start at $95. Visit the Swatch website for more information.