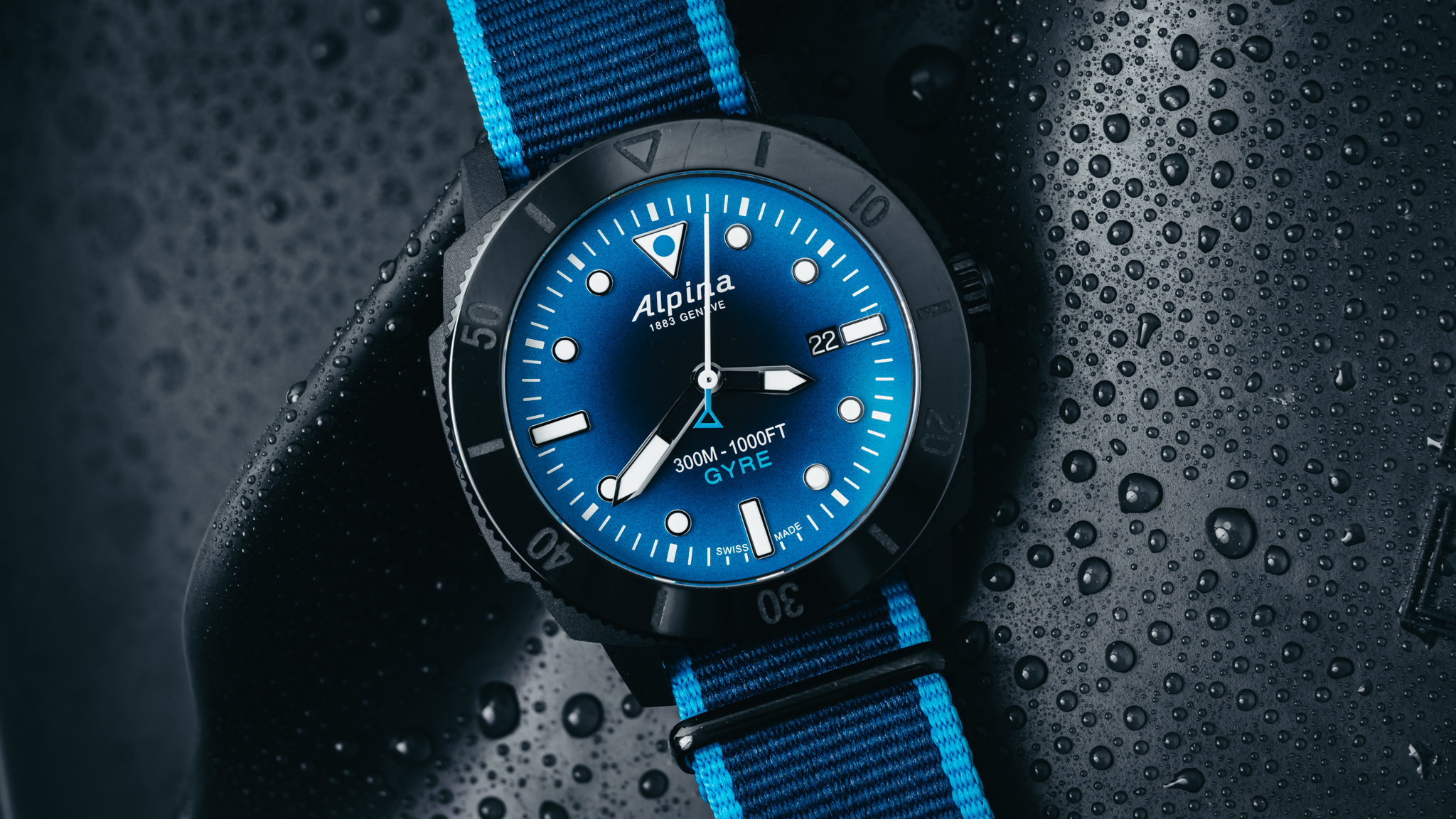 Hands-On With The Alpina Seastrong Gyre, A Dive Watch Made From Ocean Plastic 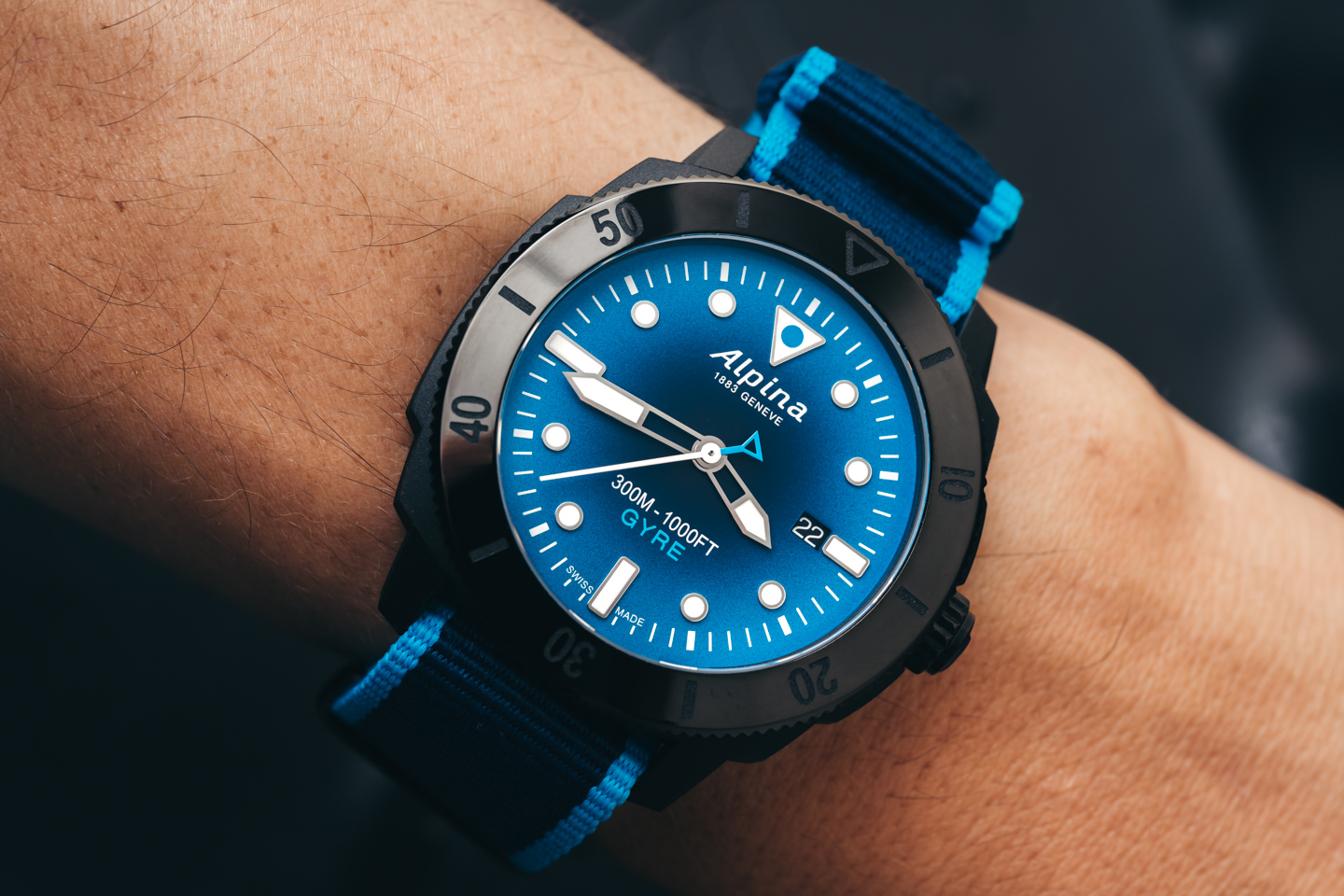 So, there’s an island that fills an area twice the size of Texas (or three times the size of France, for our European friends) floating around in the middle of the ocean, but paradise lost this ain’t — it’s actually a floating vortex of trash appropriately dubbed “the Great Pacific Garbage Patch.” In fact, this human-made blight is so big, its nebulous location can be followed via Google Maps as it drifts on the ocean’s currents between Hawaii and California. Numerous efforts are underway to reduce the size of the patch, which is estimated to contain nearly two trillion pieces of plastic (weighing a collective 80,000 tons) wreaking havoc on ocean ecosystems worldwide. One such way to do this involves creating products out of the plastics retrieved from its slurry — products like the new and limited Alpina Seastrong Gyre. Why “gyre?” Well, in oceanographic terms, a “gyre” refers to a large system of circulating ocean currents, one of which is, sadly, best known for the amount of garbage trapped within its movements. 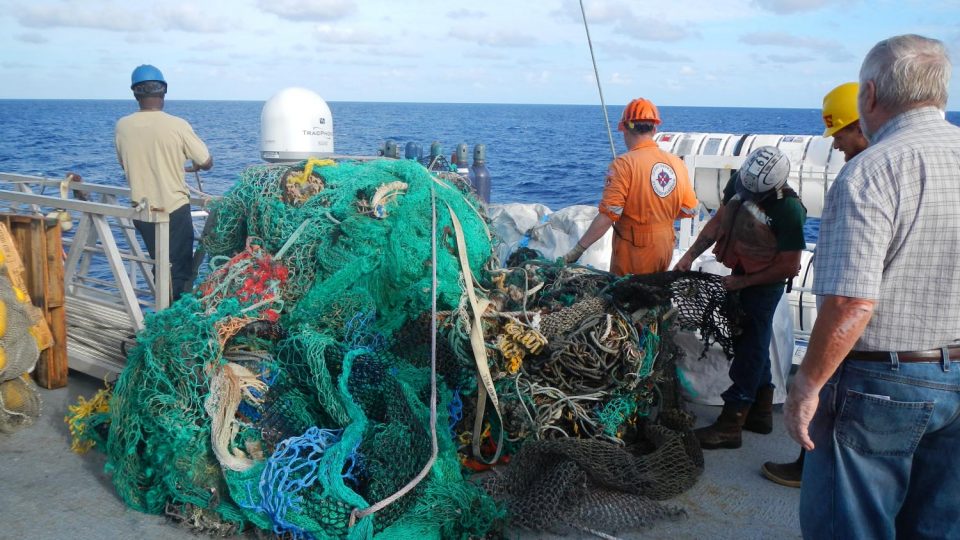 A collection of ghost nets pulled from the Great Pacific Garbage Patch. Source: The Ocean Cleanup

Produced in collaboration with Dutch microbrand Gyre, the Seastrong Gyre’s matte black case is made from a combination of fiberglass “ghost nets” (abandoned fishing gear) and upcycled plastic pulled from places like the Great Pacific Garbage Patch. It’s quite light on the wrist, though not unnervingly so — a feeling that many forged carbon or pure composite cases tend to lend their wearer. Being a dive watch with a full 300 meters of water resistance, the Gyre is fitted with a ratcheting unidirectional bezel, but it lacks the sharp, detented precision I remember from my stainless steel Seastrong. So, while concessions might have been made around elements for the bezel assembly, the rest of the watch oozes quality — particularly the dial, which is easily one of the nicest I’ve seen this year. More on that in a moment. 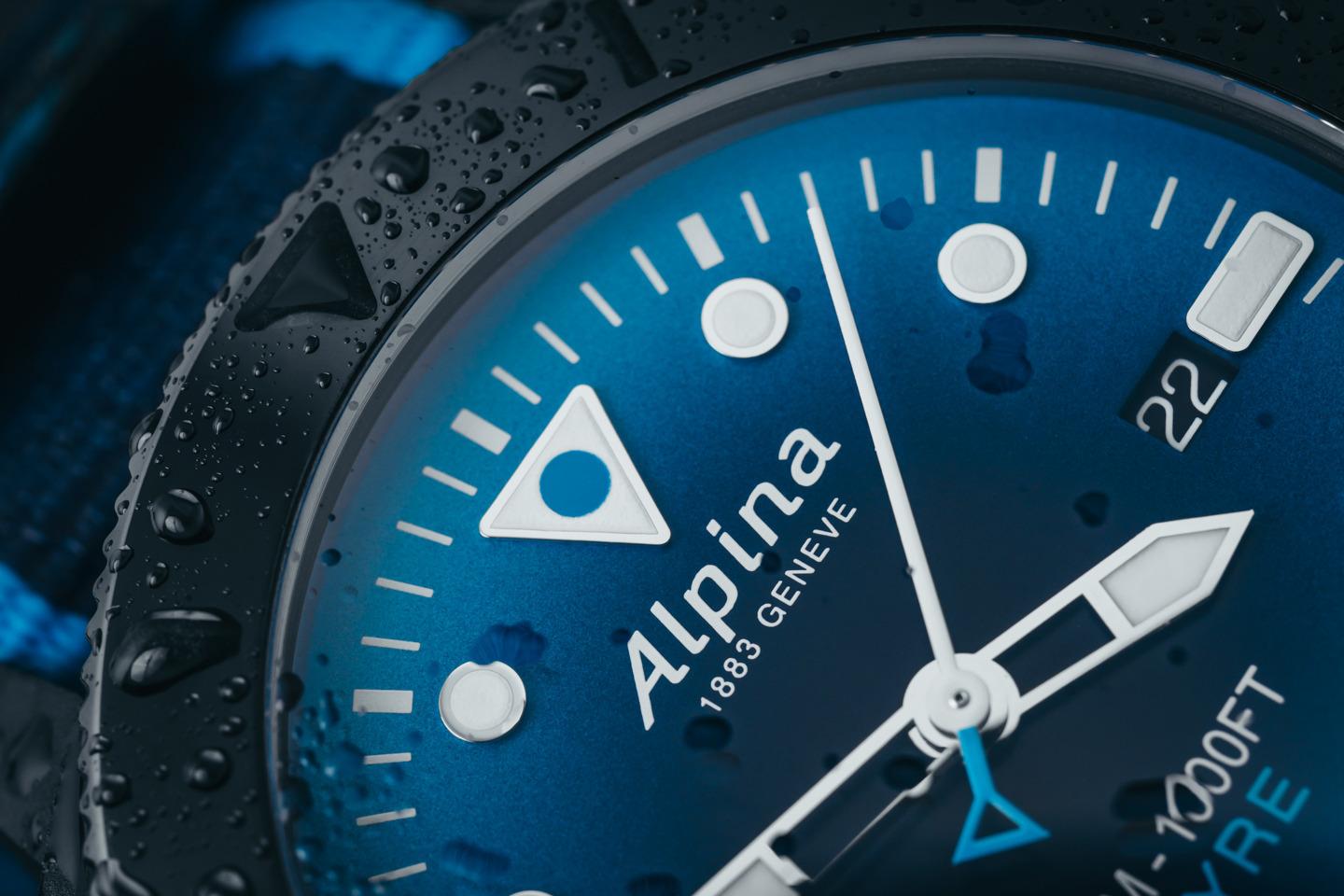 I’ve said it before, and I’ll say it again: Brands that are not contributing to reducing human’s overall footprint, either through addressing climate change solutions or upcycling refuse – however great or small in this era — are part of the problem. It’s encouraging to see more brands in the watch industry get on this bandwagon because at the end of the day, whether the intent is genuinely altruistic or simply the creation of marketing talking points, both ultimately achieve a positive objective: a greater level of awareness inside and outside the industry that can ultimately empower consumers to side with progressive, planet-first issues while creating pressure on fellow brands to participate. Given Alpina’s support of the National Parks Foundation, and other outdoor-focused endeavors, I’m inclined to believe the brand’s intent with the Gyre watch is one of genuine altruism. 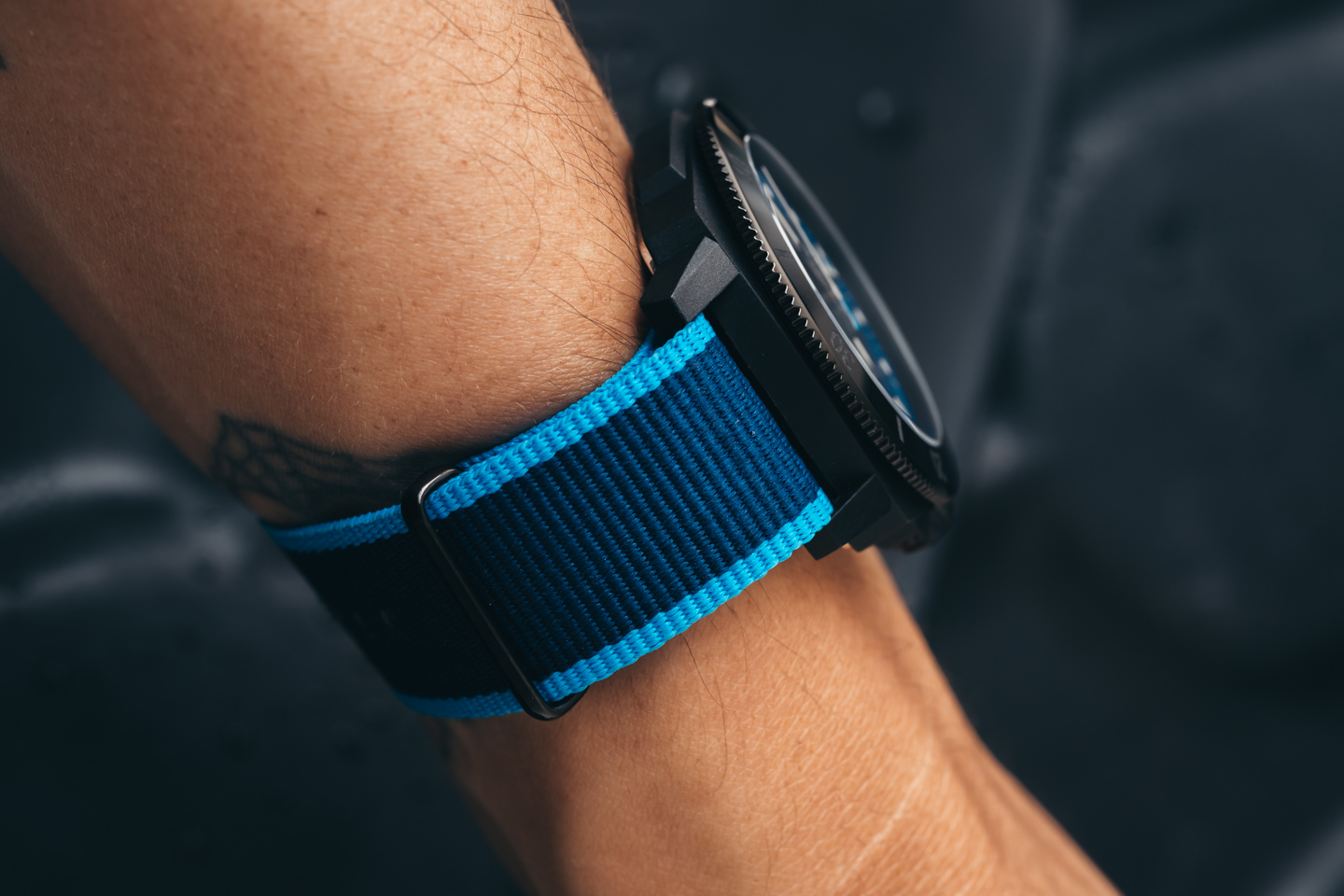 At first glance, on the wrist, the Seastrong feels vaguely familiar – perhaps the combination of several sources of inspiration, one of which might have been a Bonati-era Panerai Submersible, with its minimalist approach to dial design and the circle-atop-a-square case footprint. In contrast, though, the Seastrong’s fitted with a set of short, pointy lugs that enable its 44mm case to wear with a surprising amount of ease — making it far more comfortable than any deep-diving Panerai I’ve ever worn. Regardless of inspiration, the end result is a very cool, markedly distinctive modern dive watch that feels comfortable enough in its own skin to forge an entirely new identity. 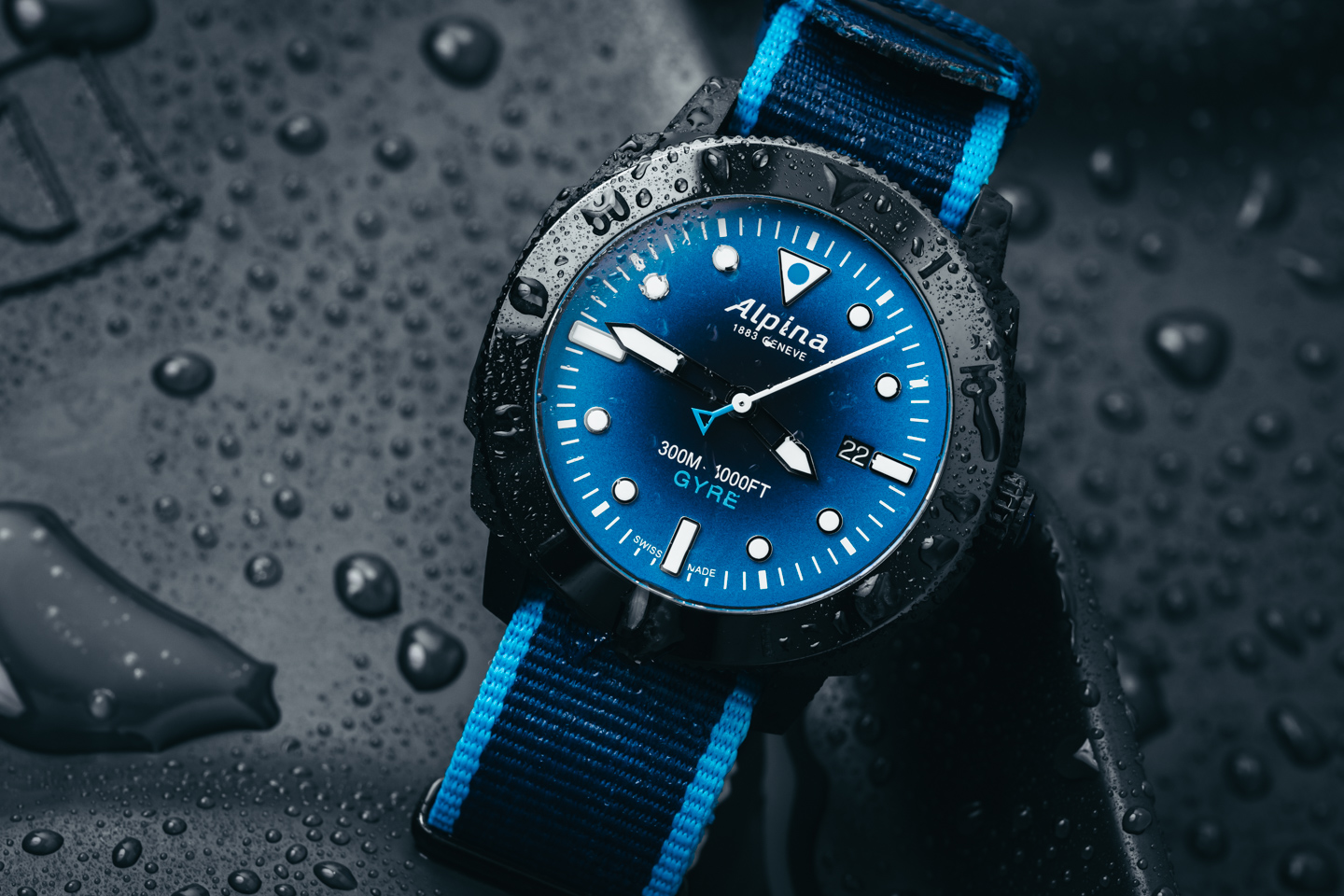 But even within the Seastrong collection, the Gyre is an entirely different beast. Sure, it borrows the same case design, but its composite makeup makes it dramatically lighter on the wrist. Meanwhile, it’s also been fitted with a gorgeous “smoked blue” gradient dial that’s finished with circular applied hour markers, as opposed to the long, pill-shaped markers used on the standard Seastrong. It’s really a fantastic-looking watch and a highly legible one — as long as you’re not trying to time anything with the blacked-out bezel, which, by contrast, is not particularly easy to read in anything but direct light. Beneath that dial, we’ve got Alpina’s AL-525 automatic movement — a Sellita SW200-1 base, with the expected 4 Hz beat rate and around 40 hours of power reserve. Alpina made the custom black rotor for this movement visible through an exhibition caseback on other Seastrong references, but not this one. 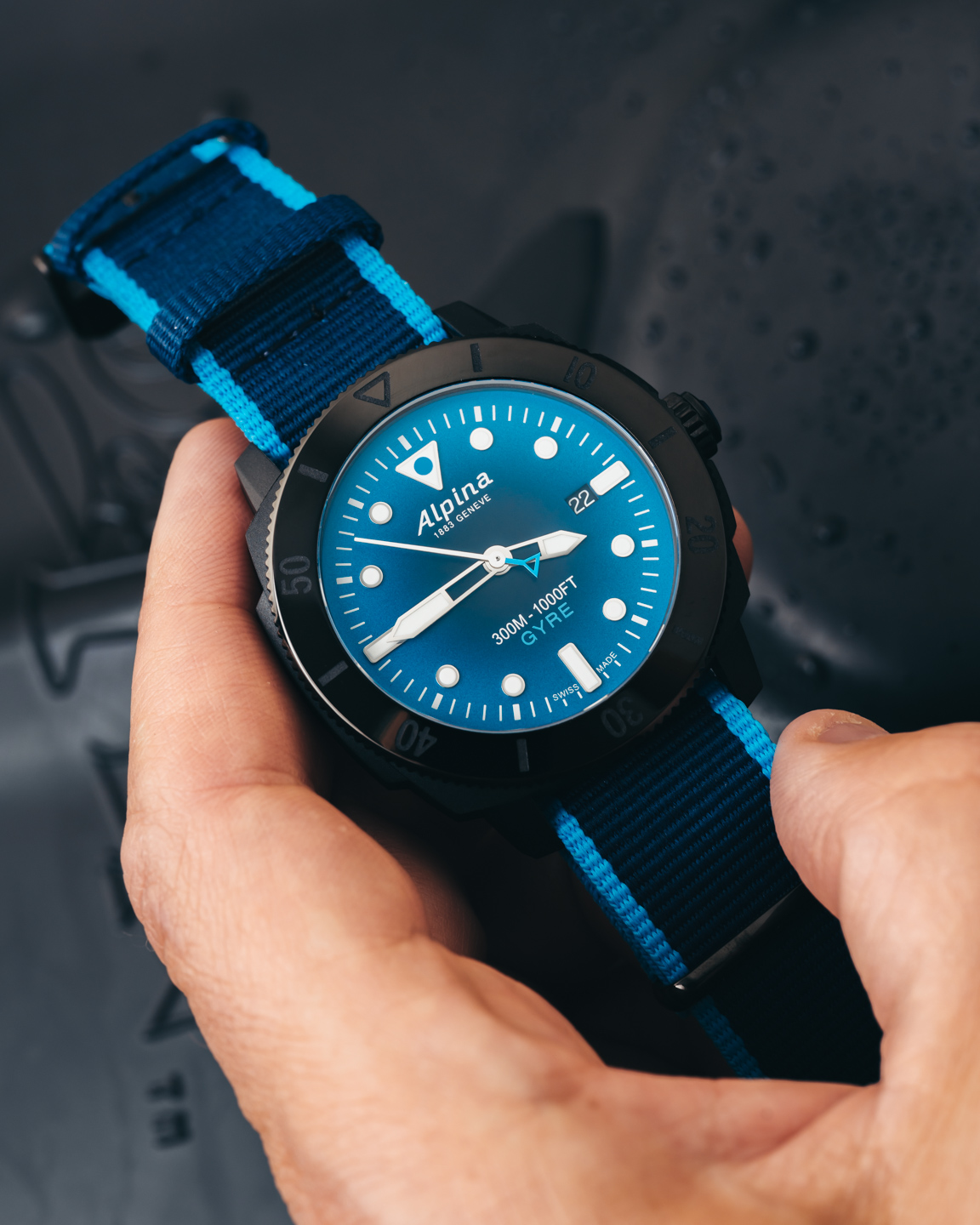 The Seastrong Gyre is said to ship with two straps: the recycled nylon NATO (made with two recycled plastic bottles) photographed here, and an additional “apple leather” strap, which was not part of the press sample kit I received. Interestingly, this new form of sustainable “leather” is actually called Pellemela, which is made from dehydrated and powdered apple peels and cores, water, and natural glue. It’s already being used in other sustainable leather applications like belts and handbags, so why not watch straps? 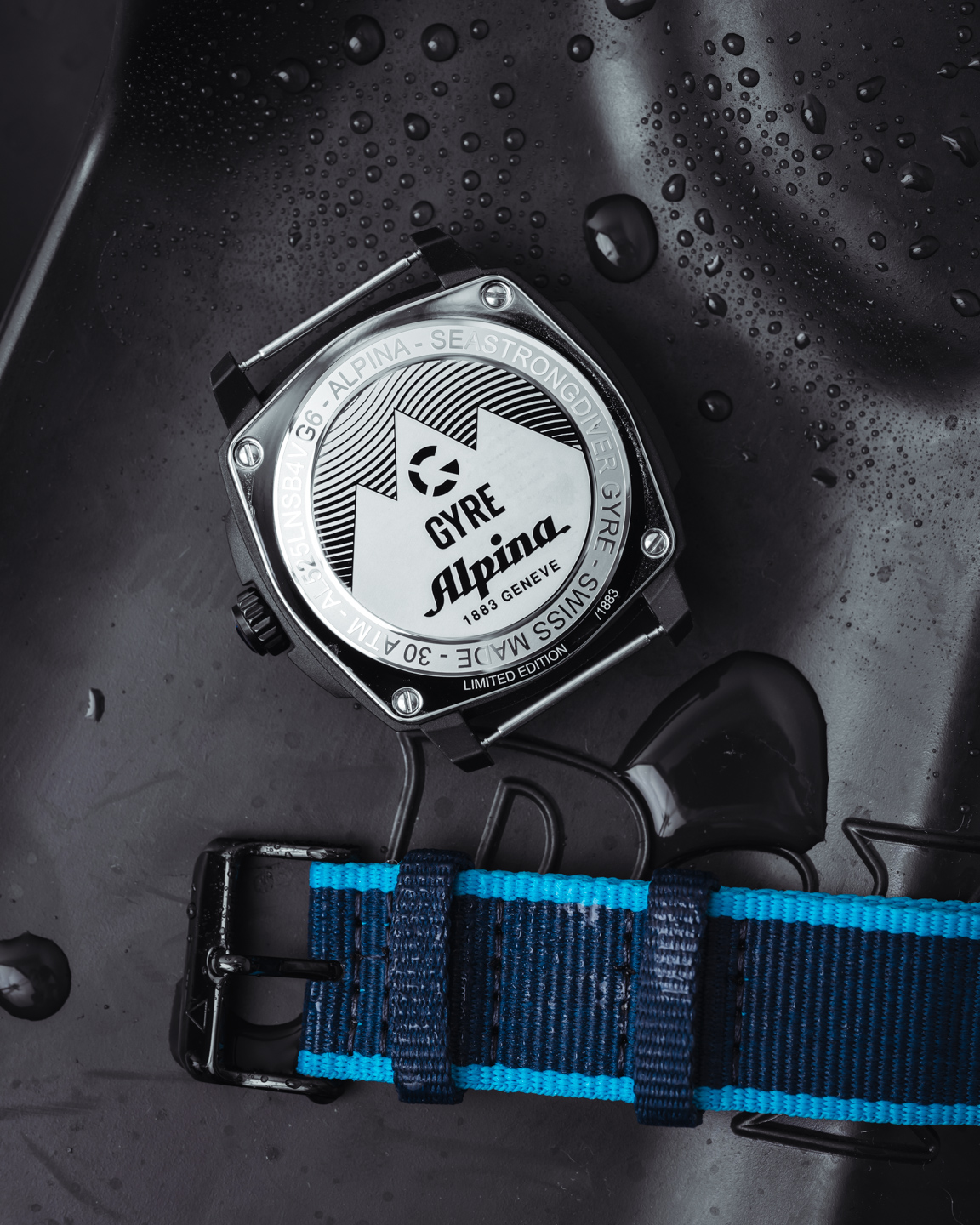 All things considered, I’m quite pleased to see just how good the recycled and sustainable strap options have gotten in the watch space. In just a few short years, we’ve gone from stiff, oddly colored affairs (no offense Oris, even if you were well ahead of the curve), to colorful and surprisingly comfortable nylon options from Panerai, Breitling, Ulysse-Nardin, and now Alpina. Something as simple as a recycled plastic watch strap or a limited-production watch case made from ocean trash are collectively small drops in a large bucket, for sure, but small, incremental changes are the key to widespread meaningful impact – just ask Apple, which, as part of the brand’s 2030 net-zero climate impact plan, has pledged to omit something as small as the power adapter from every iPhone box moving forward — a change that the tech giant says will cut over two million metric tons of carbon emissions annually (the equivalent of removing nearly 450,000 cars from the road per year). Alpina is certainly no Apple, but as a small tooth in a much larger global cog, this matters.

Only 1,883 pieces (a nod to the brand’s founding in 1883) of the Alpina Seastrong Gyre are being made in two colorways (the “Smoked Blue” dial pictured here, as well as a softer, matte blue option) each with a price of $1,650 USD. Learn more about the Seastrong and order your own at alpinawatches.com.