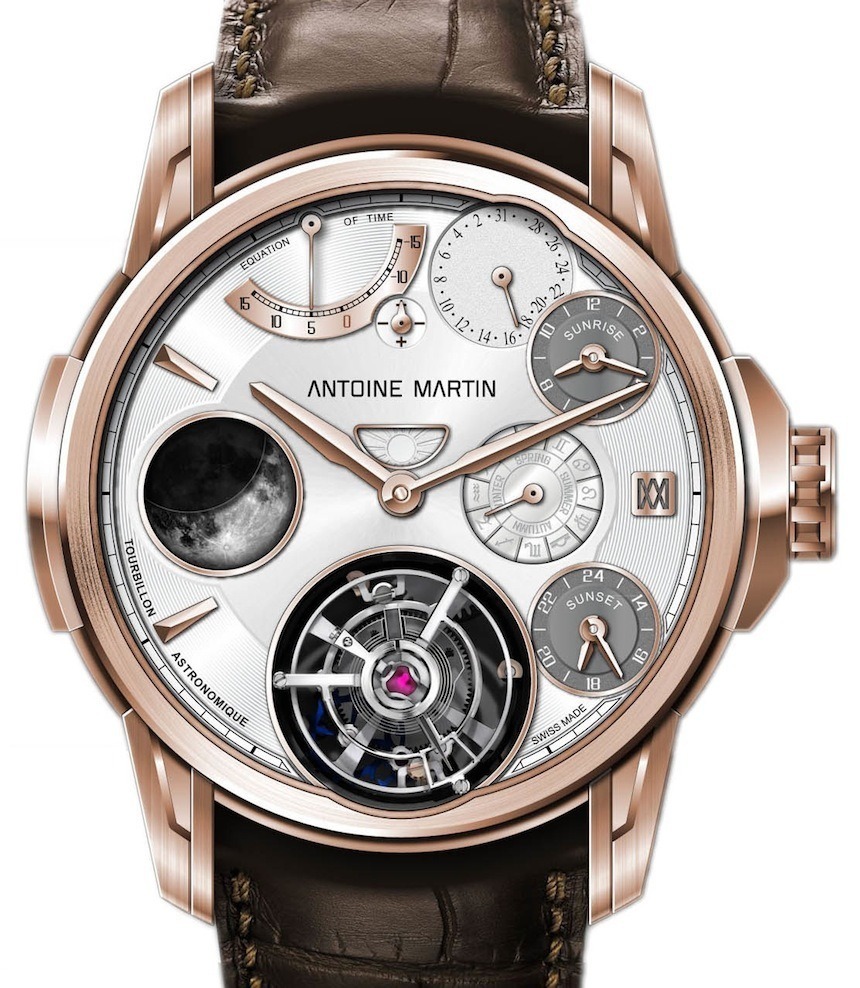 Antoine Martin has rightfully earned itself a special place in the heart of hardcore watch enthusiasts with their Slow Runner piece and its huge, gracefully oscillating balance wheel exposed at the caseback. But there is another side to the brand, one that offers more traditional complications, re-interpreted to fit into the rather well-defined styling cues of the brand. In 2012, Ariel went hands-on with their perpetual calendar and tourbillon model, and today we are debuting the Tourbillon Astronomique, a watch they also refer to as their “Masterpiece No. 1”. Now, that is a name that we find rather fitting for what is an incredibly complicated piece that fuses more traditional features with a number of unique astronomical indications.

Looking at the list of features and the actual dial of the Tourbillon Astronomique, it gives the impression of a watch that was intended to be complicated in the first place, but then somehow morphed into a watch maker’s wet dream, comprising an array of functions that go beyond the line of what makes sense, but is likely just enough to entertain a master watch maker and his narrow circle of customers. Let’s start from the more traditional and work our way through to the more outlandish features of the Tourbillon Astronomique. 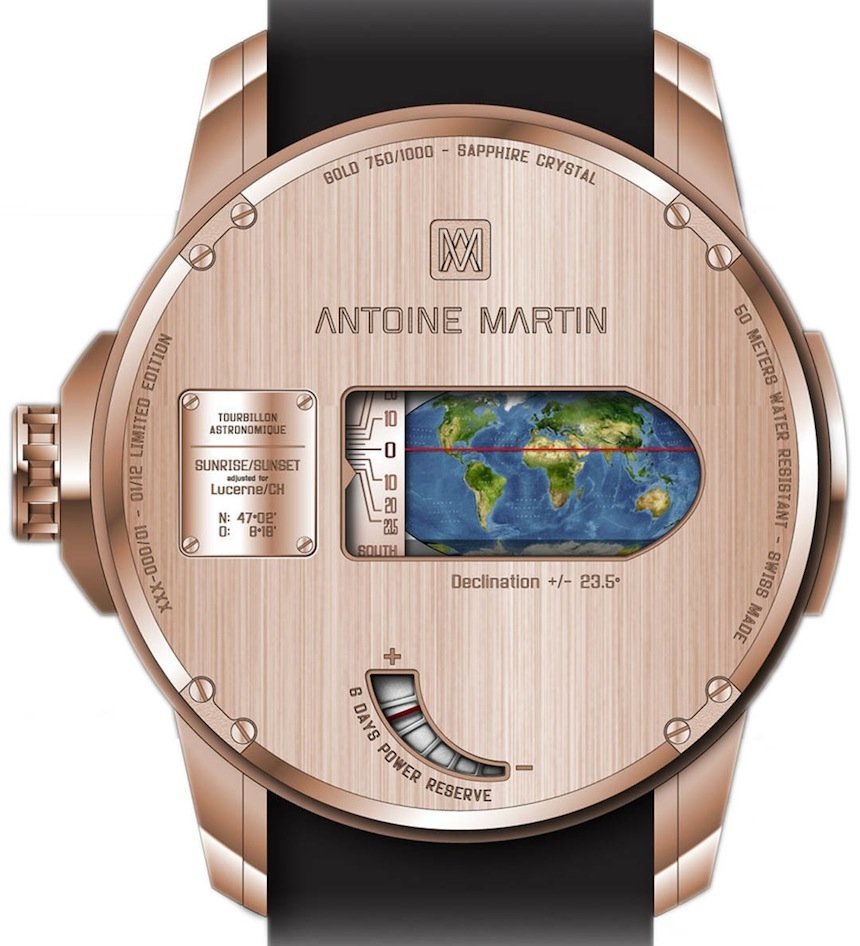 As a nod towards traditional watchmaking, a one minute, 2.5 Hertz flying tourbillon is seen exposed on the dial side. Knowing that Antoine Martin likes to have their own interpretations when it comes to escapements, it is of no surprise that they could not leave this two centuries old invention alone. Instead, as a rather unique feature from such a small independent brand, the pallet lever, escape wheel and impulse pin are all made of silicium (or silicon), for the material’s non-magnetic qualities and the fact that it renders the use of lubricants redundant. Something that many brands tend to “forget” when they set out to make a tourbillon watch is properly regulating it. This is not to say they are horrendously inaccurate, but rather that while such pieces are praised for their superior rate results, they actually are often set to less stringent expectations.

With today’s manufacturing abilities, creating the microscopic parts of a tourbillon escapement is difficult, but is nonetheless manageable, and so the real challenge lies in regulation, as the constantly rotating tourbillon is not only much more difficult to adjust than a fixed balance wheel, but is also a lot more time consuming to repeatedly check for accuracy as adjustments are performed. By contrast, according to Antoine Martin, the tourbillons in their watches are adjusted for five positions and for temperature changes; which is an appreciable, and again, not so ubiquitous effort.

It is safe to say then that a lot of effort has gone into making this watch a tourbillon, and a rather special one at that. Things get more, well, out of control with the astronomical indications of the Masterpiece No. 1. There are six of these on the dial and two on the case back, so let’s go through them one by one. To begin with, there is a date, and no, it is not of the perpetual, not even of the annual kind: it is your simple date that requires correction at the end of every month that is less than 31 days long. The reason for this is that there was really no space left in the movement –or inside the already substantially sized case – for a more complicated version. One thing that does make it rather unusual though, is the date hand’s rotation which is counter-clockwise, instead of the more usual clockwise direction. But never mind, there are a great number of other features that render this piece truly special. 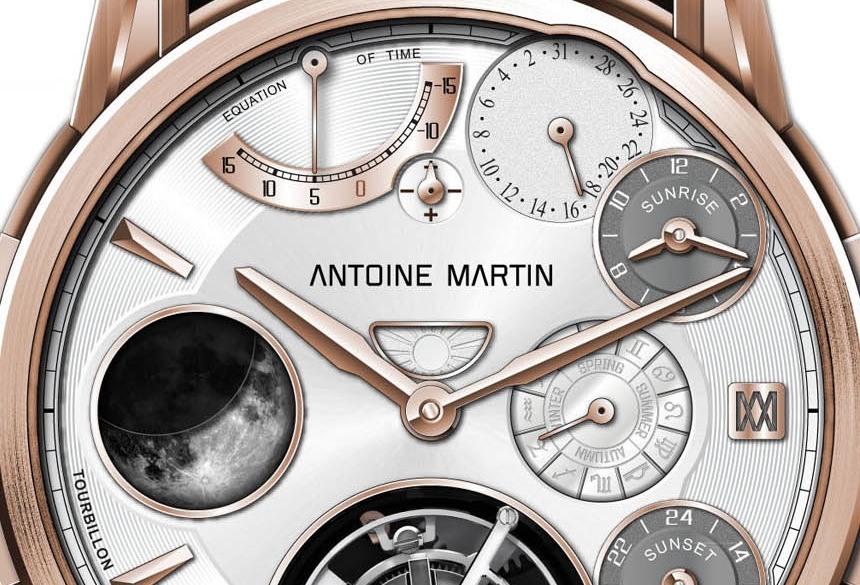 On two grey-ish subdials the sunset and sunrise times are indicated for a location of the buyer’s choice, while in the top left corner of the dial is an indication for equation of time. Now, all of these functions are set through the crown, meaning that these astronomical complications of the movement are synchronized. In practice, once the sunrise and sunset times are correctly set – which can be done through the crown using the table that is provided with the watch, they are synchronized with the equation of time and the polar shadow displays. If you suffer from trouble sleeping after a long and tiring day, just try and figure out why and how these are linked and I am certain you’ll be sleeping like a baby in less than two minutes! A more tangible explanation could be the fact that – according to the brand’s founder, Martin Braun – it was him who first created a wristwatch with sunrise and sunset indication, so he must know his way around this complication.

Another one of his inventions is the retrograde moon phase display, a rather interesting concept which was again necessitated by the lack of extra space that is normally required by the rotating disc used for this indication. Instead, in the Tourbillon Astronomique, it is replaced by a semi-transparent shadow that gradually moves across the moon until new moon (i.e. when no crescent is visible). At this point, the disc changes direction and moves the other way until it reaches full moon. The moon phase display indicates whether the shadow is moving towards full moon, i.e. waxing (symbolized by a “+”) or towards new moon, waning (as indicated by a “-“). Completing the list of indications of the dial side is the zodiac and season display, as seen at the 3 o’clock position. 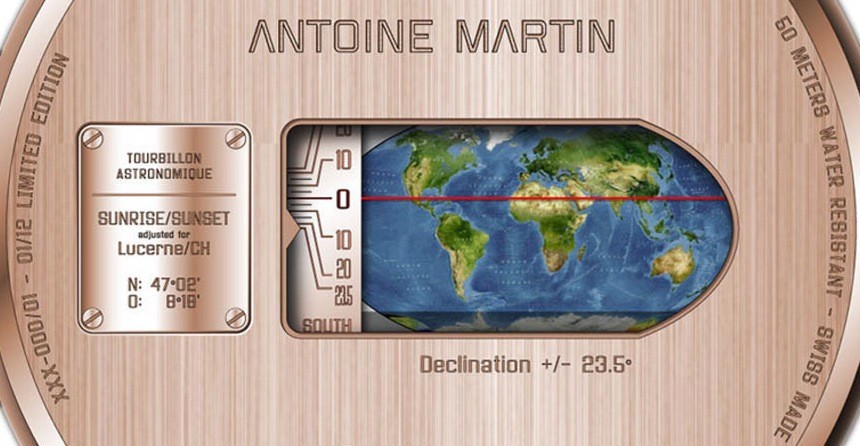 The case back is – unfortunately – not revealing any parts of the movement, instead it bears two more displays which complete the Masterpiece No.1. The more interesting of the two is the one called “declination display” and it indicates the latitude at which the sun at 12 noon stands 90° above the horizon – or in other words when a stick standing upright in the ground would cast no shadow. The thin red line moves up and down between the Tropics of Cancer and Capricorn in the course of the year; or between 23.5° northern latitude and -23.5° southern latitude. As Antoine Martin explains, “declination is required for navigational purposes and is used with right ascension to locate heavenly bodies”. In reality, it is just really cool to have a map of the world displayed on the back of your watch, with a red line officiously running up and down on it throughout the year. Below it is the indication for the movement’s six days of power reserve, while next to the “map” is a little plaque showing the location to which the mechanism and its astronomical indications were set for.

The Tourbillon Astronomique is a very new concept that strives to be one of the most complex astronomical watches ever and, in fact, it is a piece on which the brand is still working day and night to completely finish for Baselworld 2014. Consequently, they don’t have any additional images of it just yet, although hopefully we will be able to get some hands-on time with it in Basel – given that it is finished on time – and perhaps also have a closer look at the special, 428-part movement inside. What we know for sure is that the Tourbillon Astronomique will be manufactured in extremely limited quantities and will retail for around $565,000. antoinemartin.com