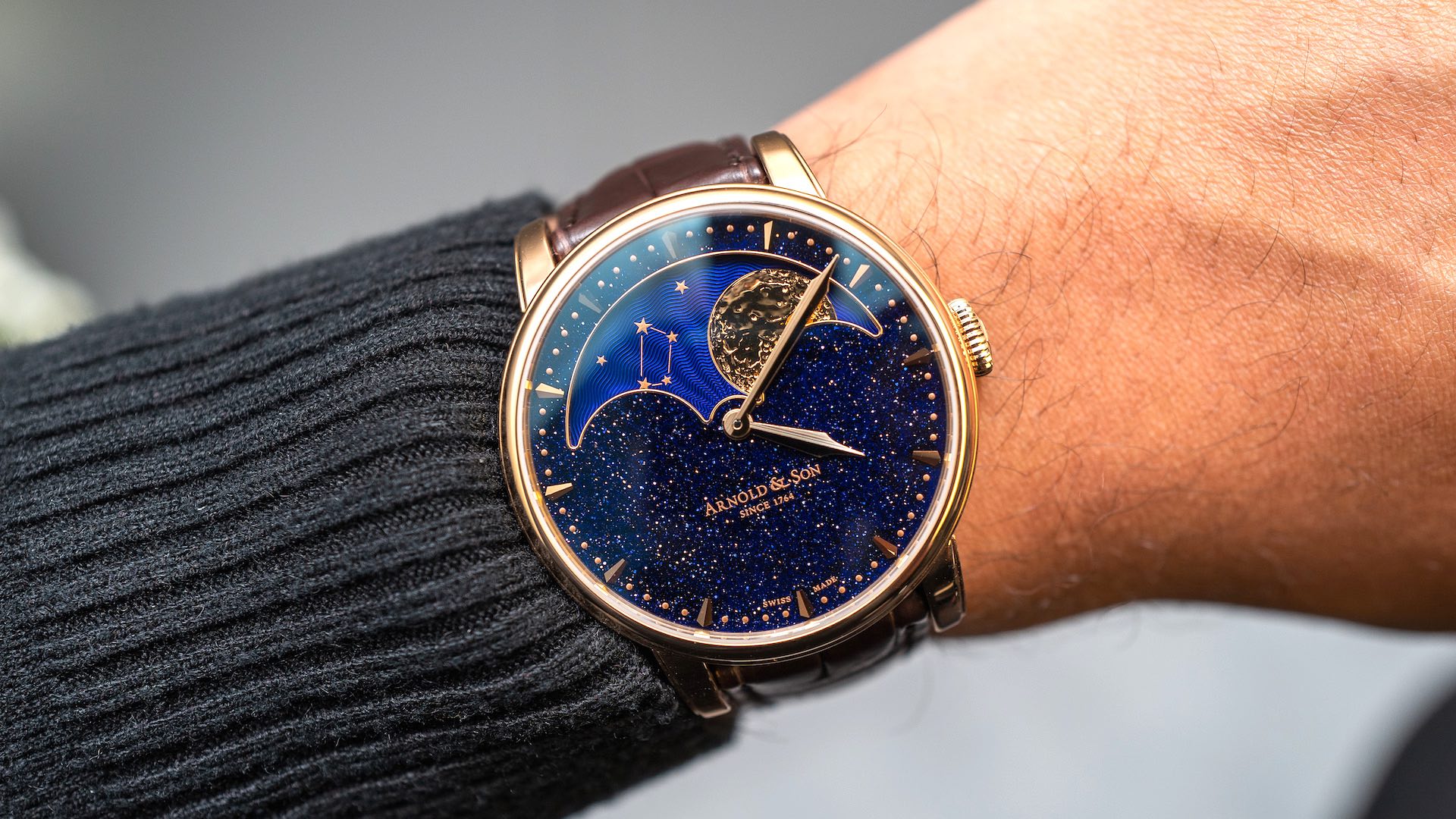 The new Arnold & Son HM Perpetual Moon Aventurine watch is, hands-down, one of the most beautiful watches I’ve seen in recent years. Aventurine has been getting more use recently, which makes more sense than a lot of other materials where celestial themes are concerned. Where the Hermès Arceau L’Heure De La Lune showed off a more brooding and shadowy aventurine dial in a subdued white-gold case, this Arnold & Son is vibrant, shimmering, and done in red gold. Both are a testament to how versatile similar themes can be when bolstered by great design. The HM Perpetual Moon Aventurine has so much textural variation and refinement, which is pulled together and crowned by the absolutely gigantic 29mm-diameter aperture looming over the dial that houses the empyrean 11.2mm-wide moon floating effortlessly in a blue, guilloché sky. 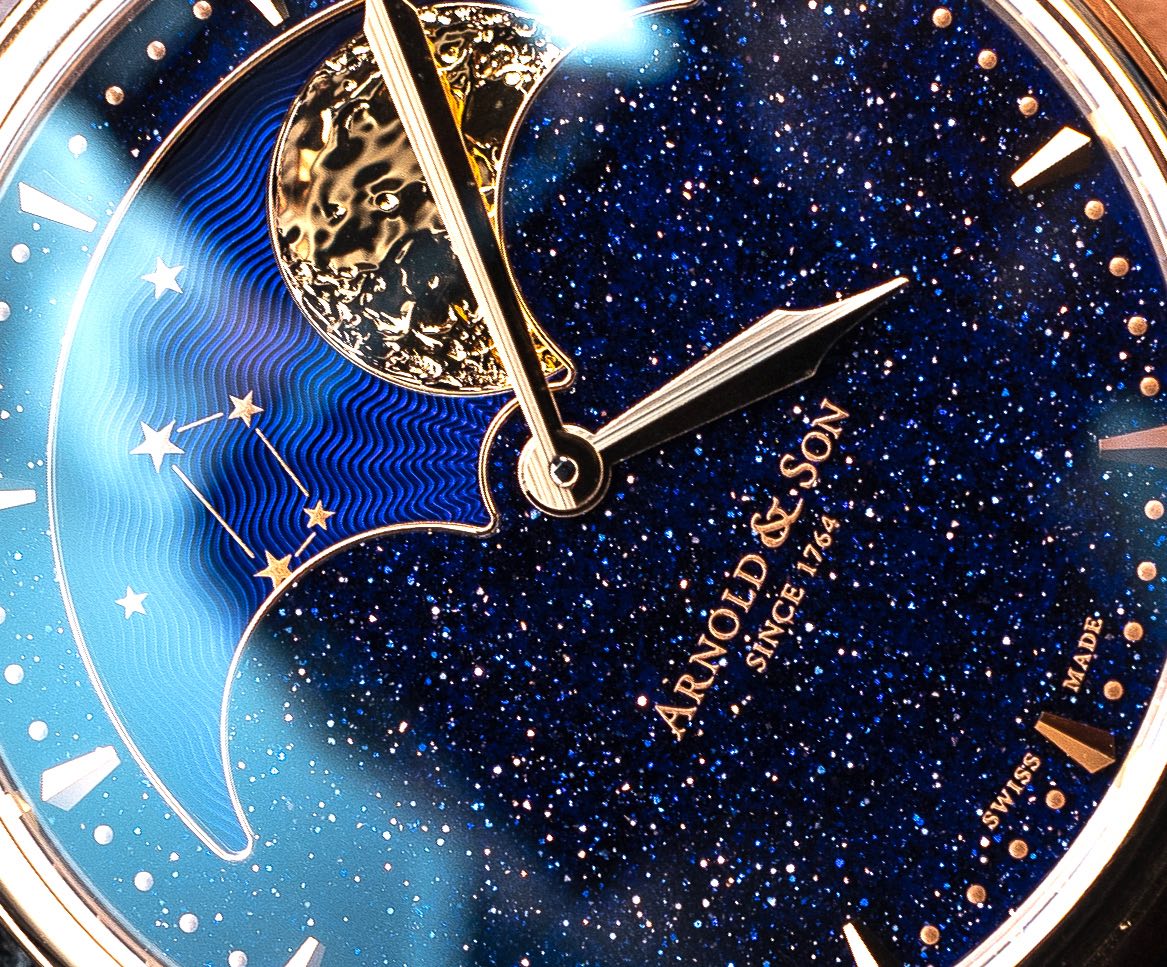 The HM Perpetual Moon has been around for some time available in a few dials. A recent model was made in steel; I never was fond of the wavy guilloché pattern used throughout the dial, but the use of Aventurine results in a magnificently celestial look. 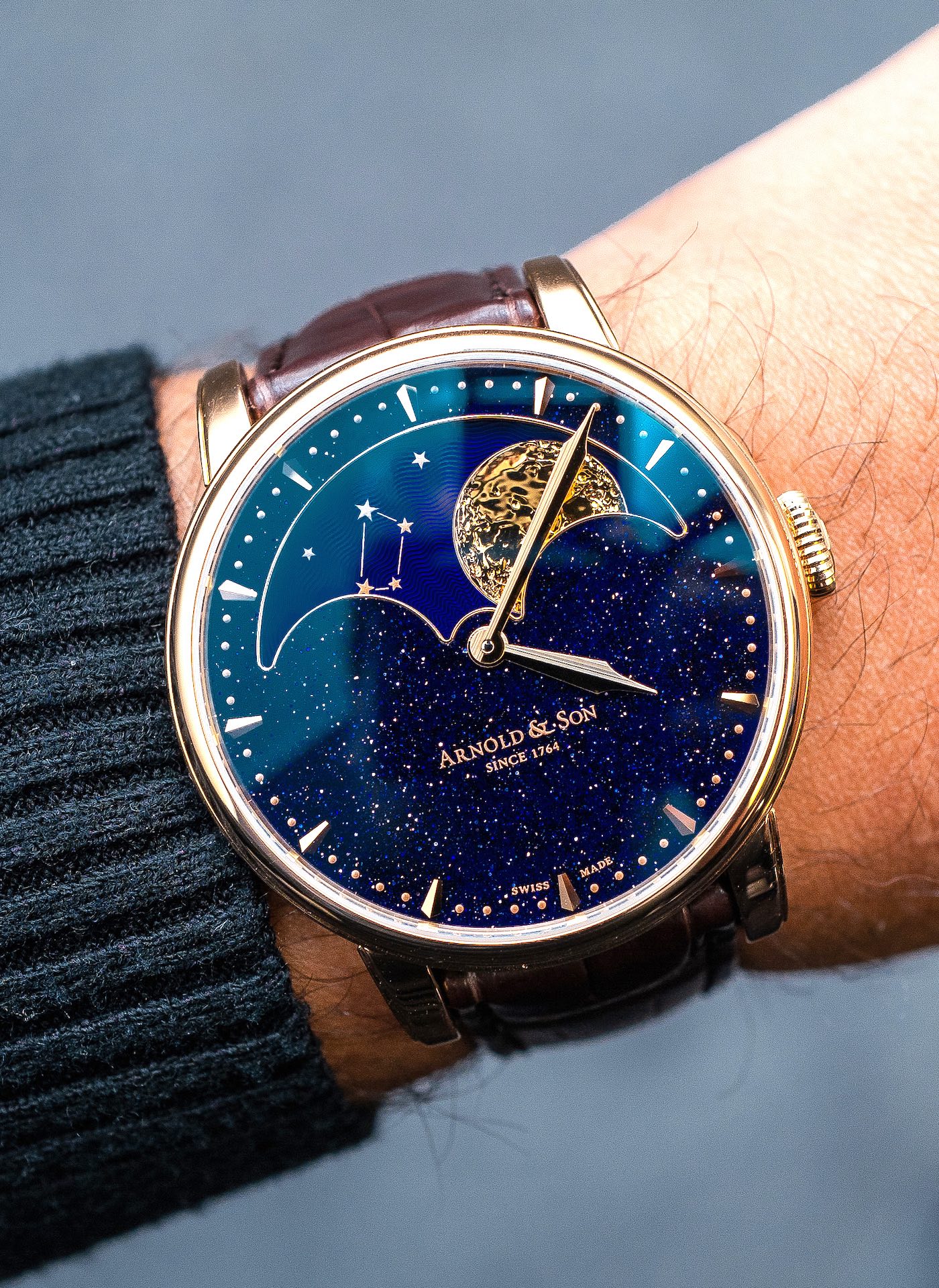 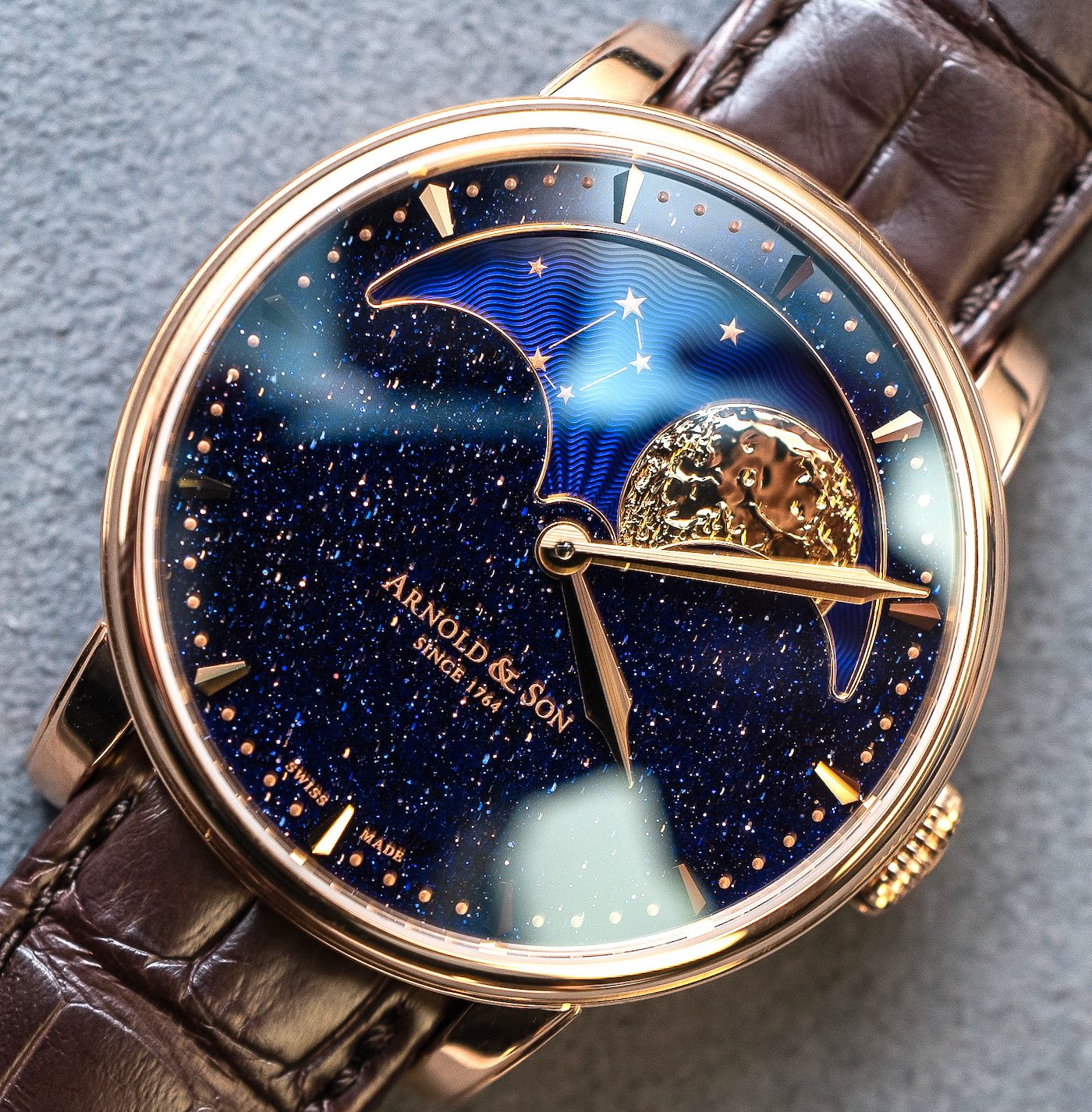 Housed in a 42mm-wide and 11.43mm-thick red-gold case, the Arnold & Son HM Perpetual Moon Aventurine keeps both the bezel and the lugs short and thin, respectively. This is more than enough real estate for the bezel since this is a watch that demands as vast a canvas as possible. 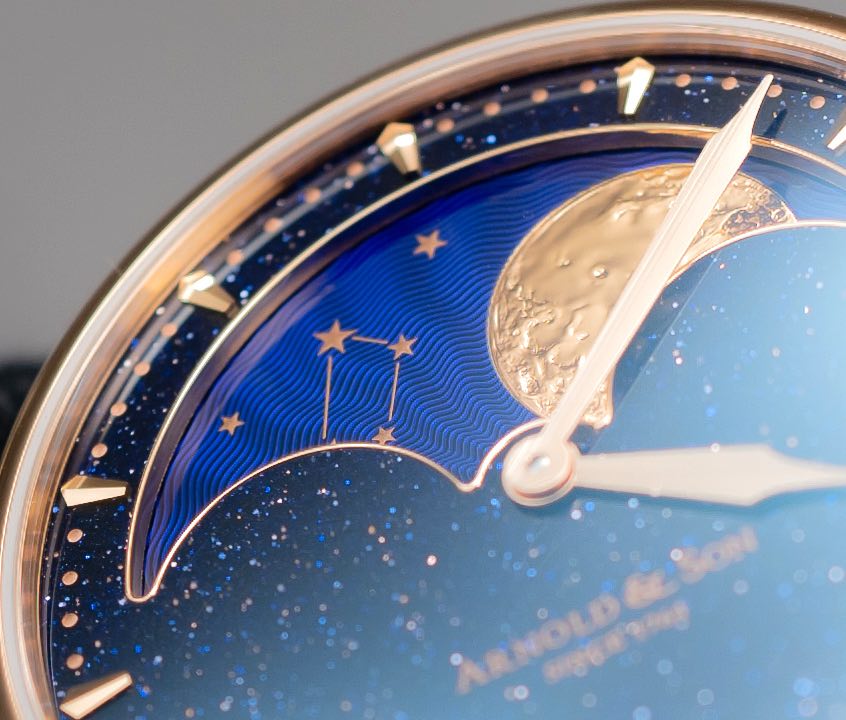 The semi-circular moon phase aperture that runs between 10 and 2 o’clock steps down on the dial, framed by a red-gold wall that creates a great feeling of depth to the aperture. It demonstrates thoughtfulness and attention to detail but also immaculate execution that results in such a truly sublime visual experience. I tried as well as I could to have the photos reflect the in-person aesthetics but they capture a fraction of it.

The 11.2mm-wide gold moon is hand-engraved and sculpted to look not just three-dimensional but as thoroughly textured as the rest of the dial. 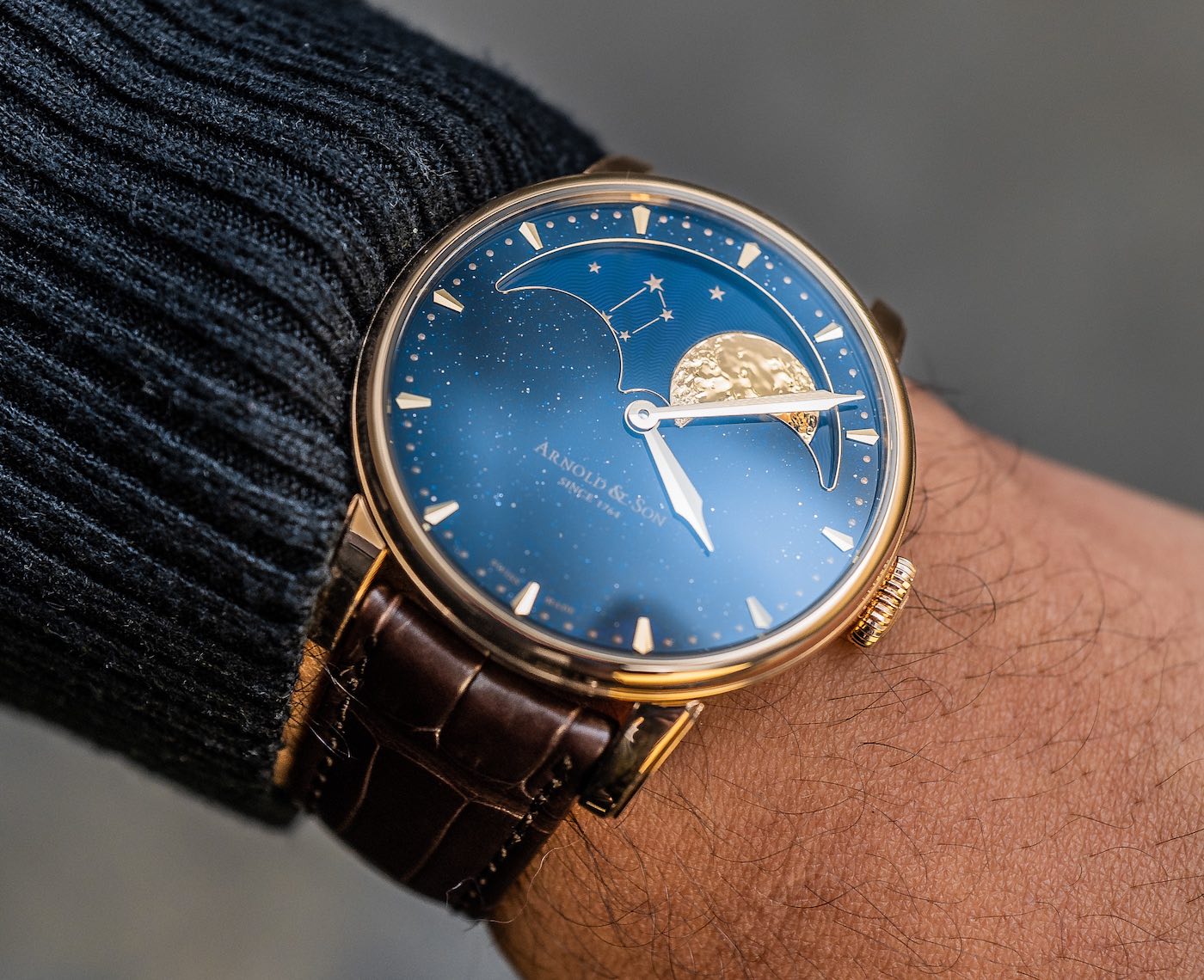 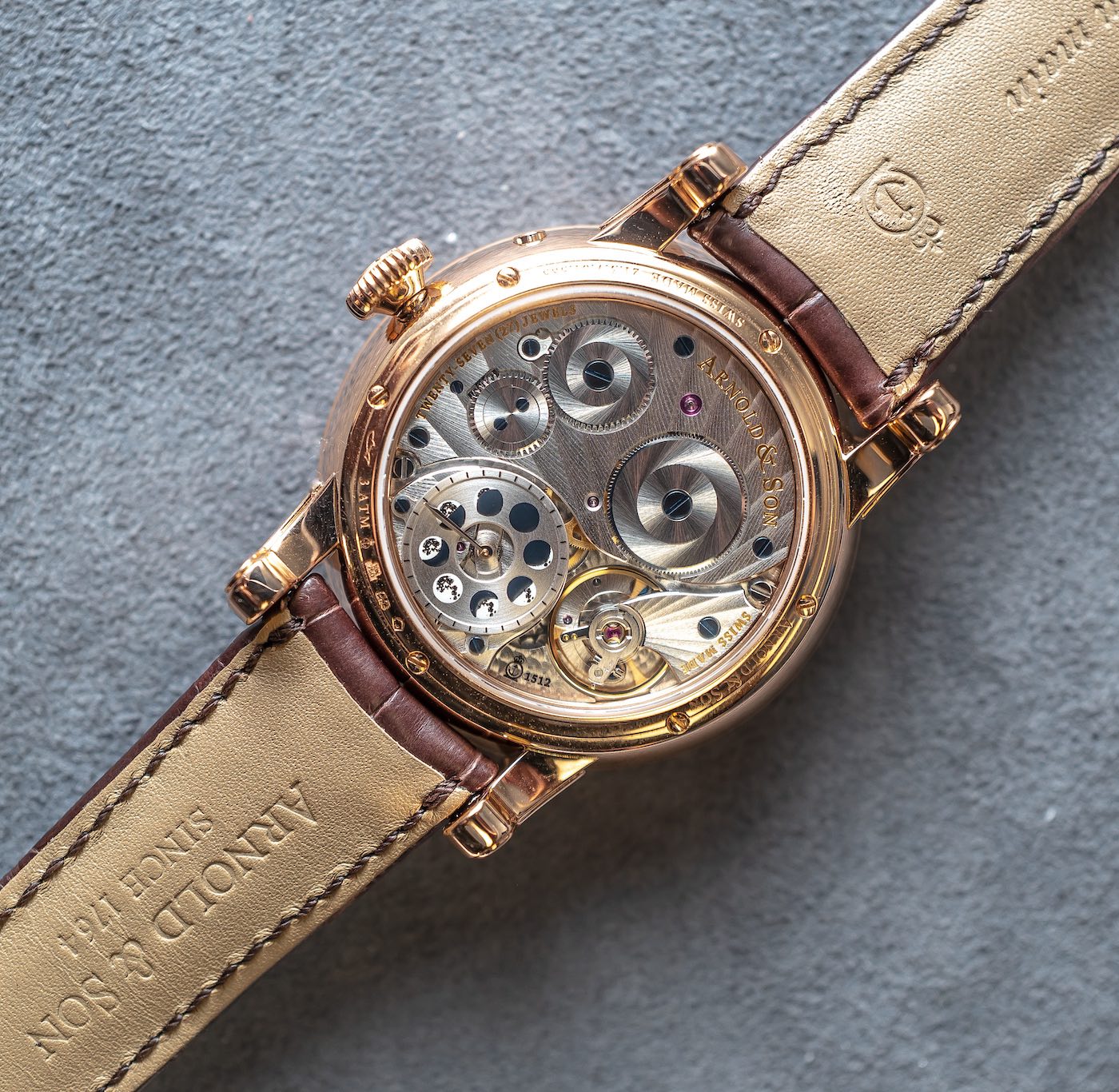 The manual-wind caliber A&S1512 was specifically designed by the brand for its moon phase watches, and it shows. When you turn the watch around and look at the caseback, there is a second moon phase “sub-dial” indicator (6 and 7 o’clock on the dial) that allows for easy correcting and setting of the moon phase (done by adjusting the pointer hand). The movement is impressively accurate, with moon phase accuracy to one-day deviation every 122 years. It’s unlikely you’ll be alive for this following step but on that 122nd year, just a push of the corrector on the side of the case will sync it for another 122 years. So make sure to leave that in a note to whoever inherits this watch from you. 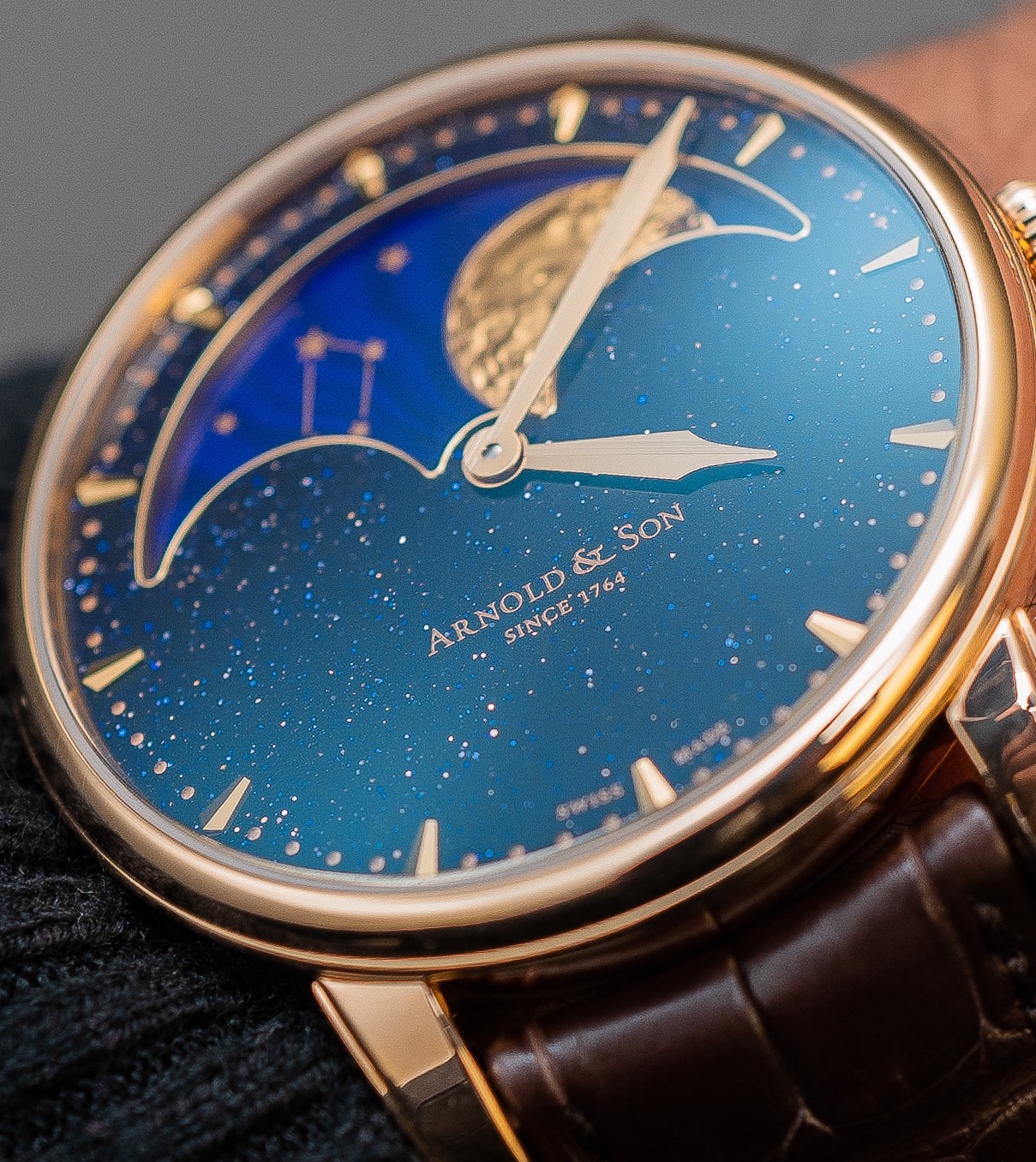 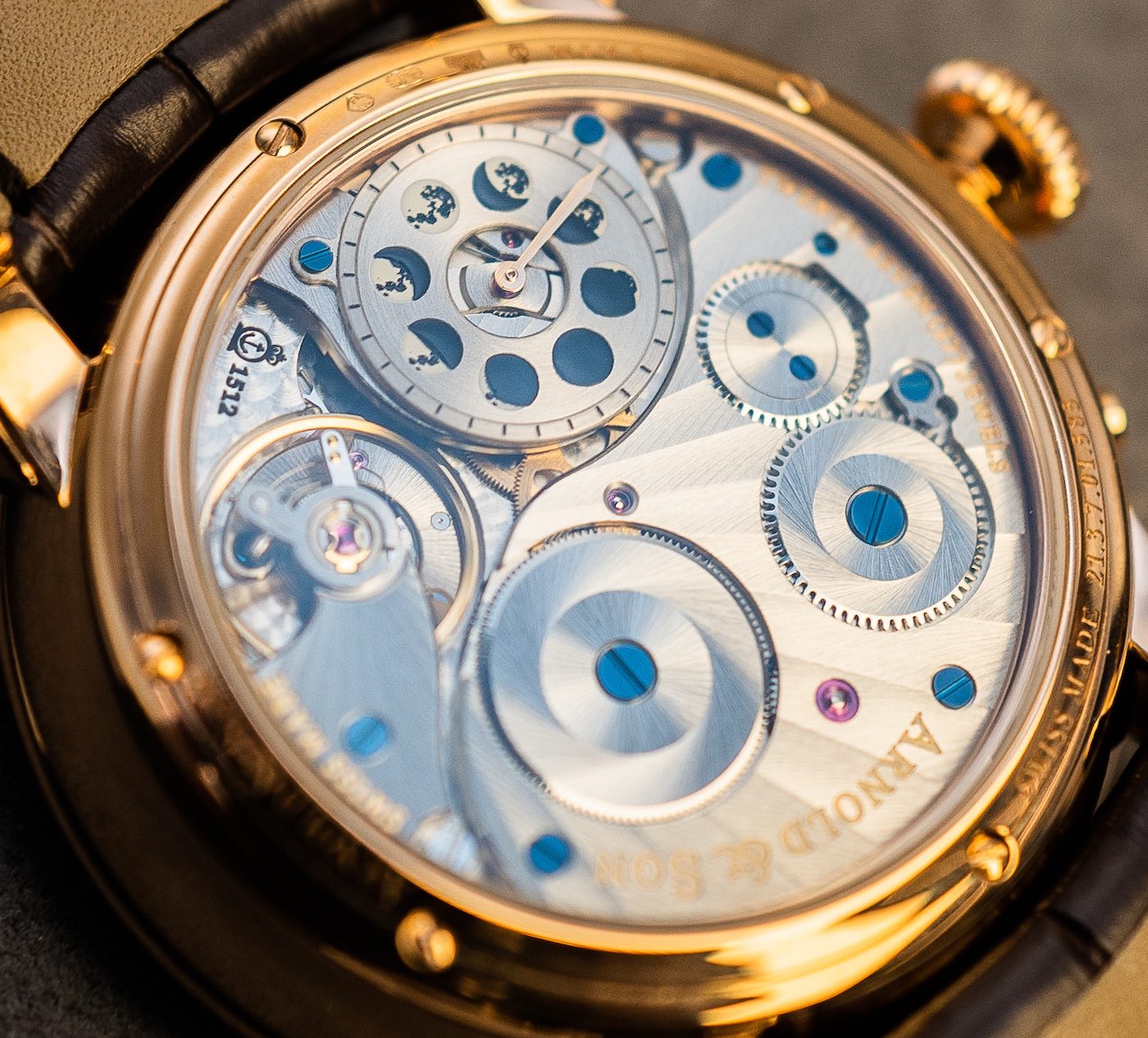 The twin-barreled A&S1512 movement measures 5.35mm-thick and operates at 21,600 vph, allowing for a robust 90-hour power reserve. As for finishings, Arnold & Son keeps things a little more demure with the movement done in a rhodium treated nickel-silver. The bridges are chamfered with polished edges, Côtes de Genève, circular graining, and blued screws are all done by hand and look polished. The star of the show on the caseback is going to be the moon-phase indicator, as it’s such a novel inclusion by Arnold & Son. Almost everyone you come into contact with while wearing this watch will likely comment on it, but the moon phase indicator on the back is something that’s really just for the owner to enjoy. 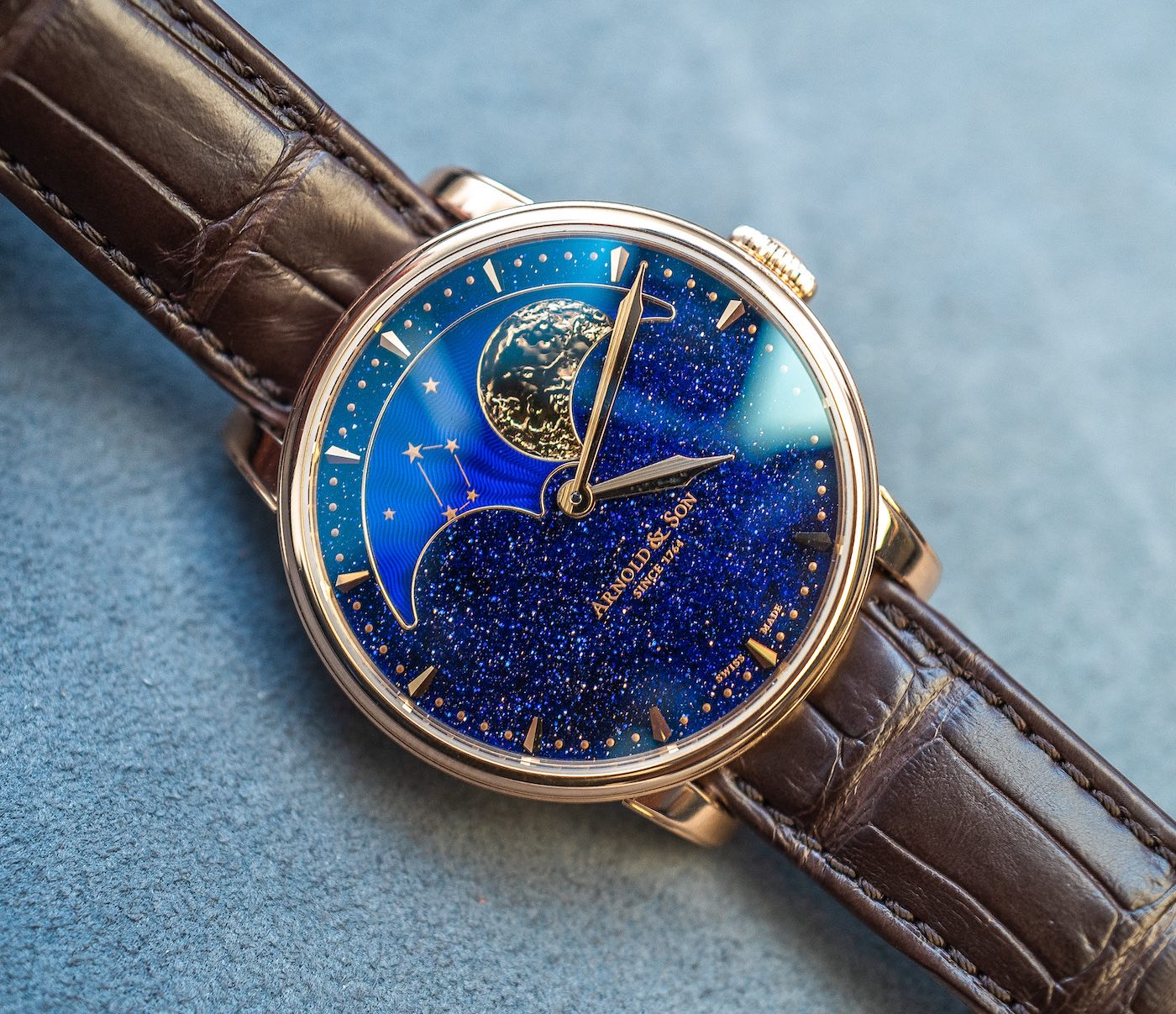 Aventurine itself isn’t a highly valuable commodity, though Arnold & Son does use pricier Aventurine stone, as opposed to glass. However, when sourced properly, the use of Aventurine can channel the spirit of the cosmos beautifully. The Hermes Arceau L’Heure De La Lune used a darker tone, while this Arnold & Son is a radiant blue with dense speckling throughout. 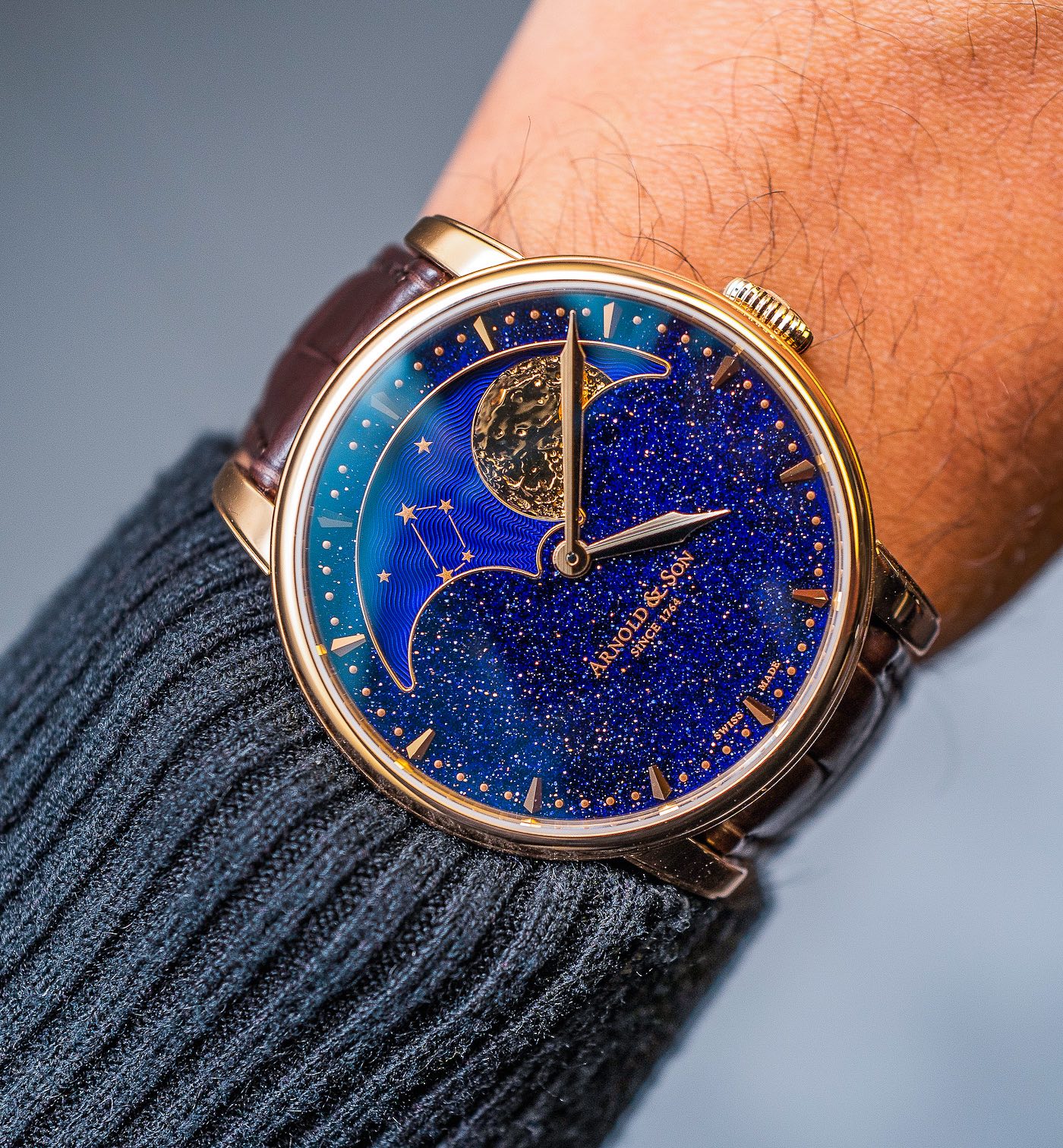 Arnold & Son has a very defined lane, and the results are hit or miss. But it’s when they produce watches like the Time Pyramid and this HM Perpetual Moon Aventurine that they earn their place as peers of the biggest names in haute horlogerie. When I asked the aBlogtoWatch editorial team about what their favorite moon phase watches are, this watch hadn’t been released. Now that I’ve seen it, it certainly would be my pick.

Again, this Arnold & Son HM Perpetual Aventurine is going to be limited to 28 pieces and will be priced at $33,650. You can learn more at arnoldandson.com.