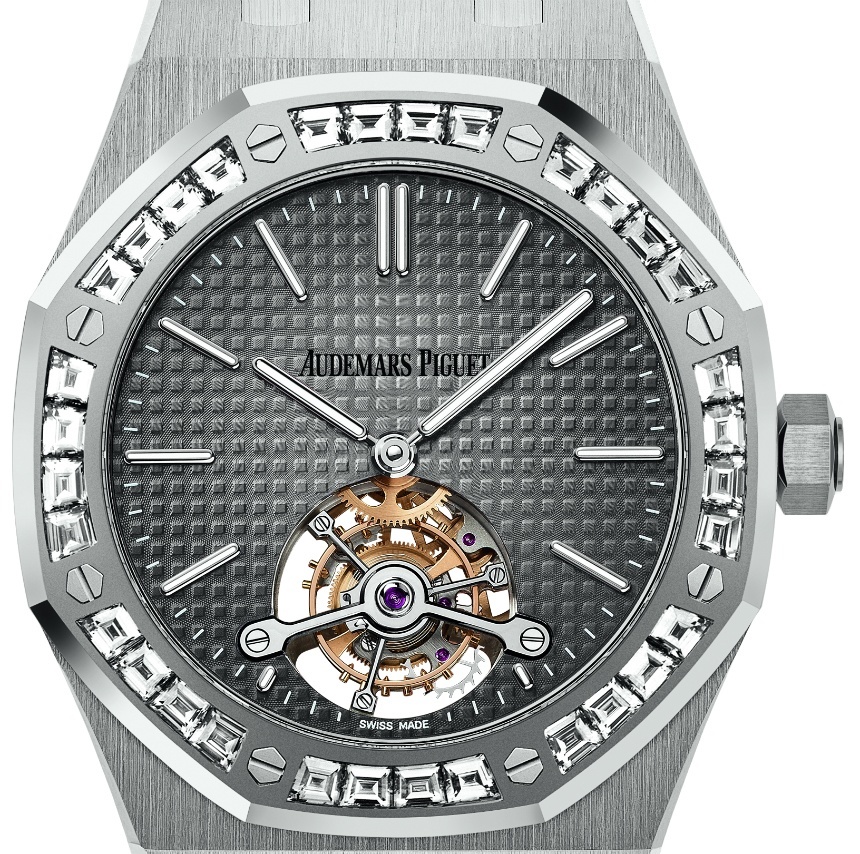 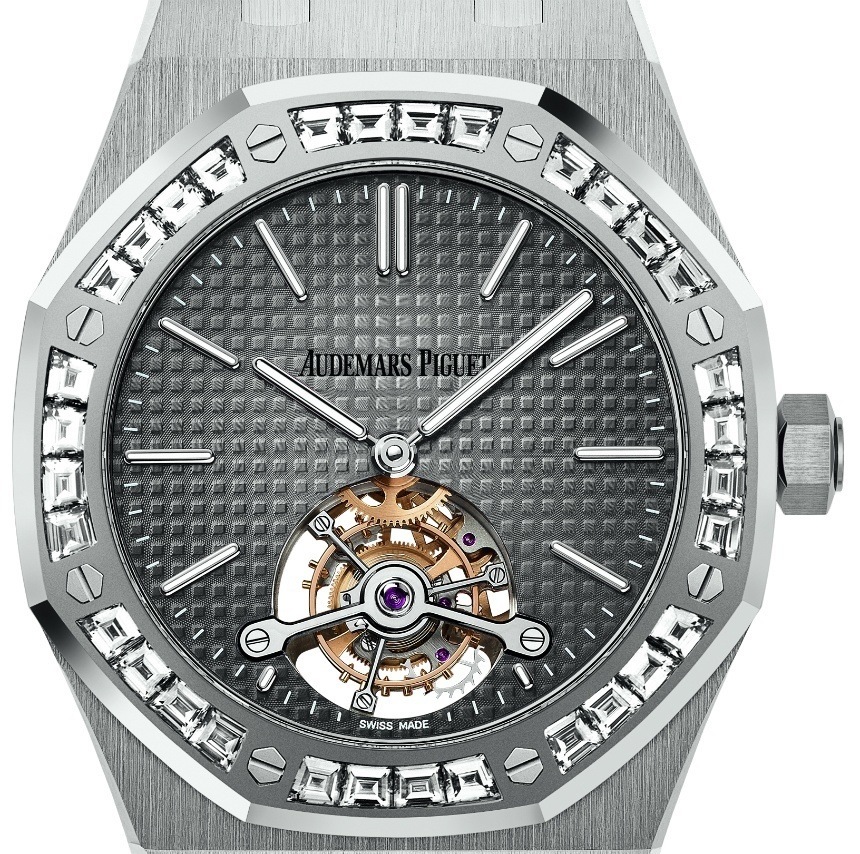 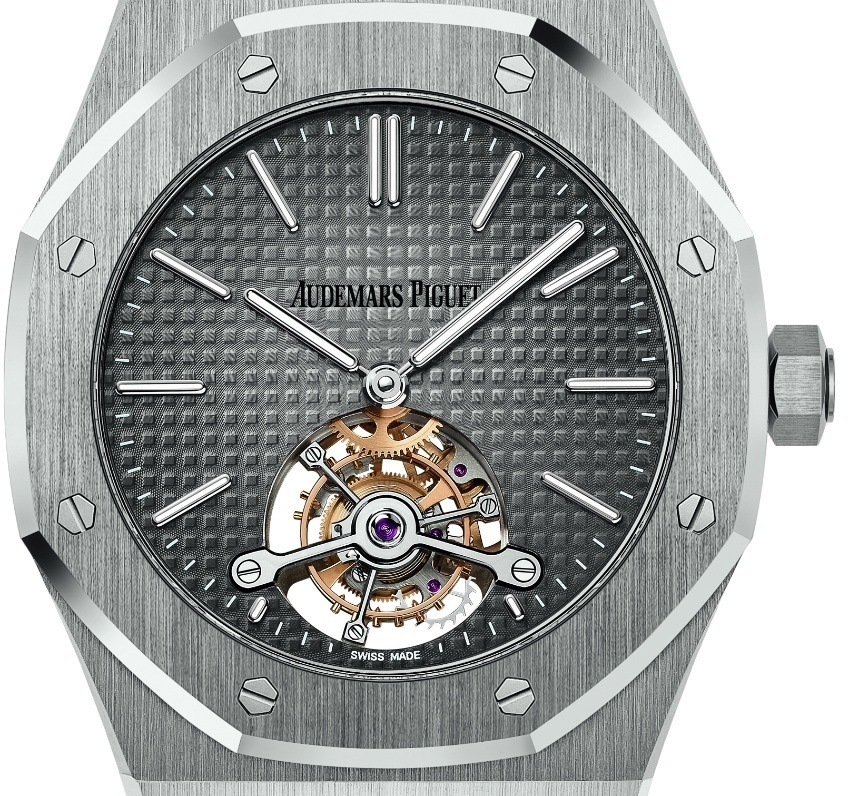 If you are familiar with the history of the Royal Oak, then you probably know that, in addition to being designed for Audemars Piguet by famed watch designer Gerald Genta, the Royal Oak was intended by the brand to be a luxury steel sports watch for (initially) the Italian market. In 1972 when the Royal Oak came out, it was just when quartz watches were coming in, and the notion of a luxury sports lifestyle watch for affluent playboys was becoming popular. The concept was to take emphasis away from the movement and instead focus on an interesting case and bracelet design. The Swiss watch industry wasn’t winning a lot of hearts and minds with traditional mechanical movements given the increasing popularity of quartz, so this new tactic allowed them an ability to separate themselves in a unique way by offering something visually rather distinct on the wrist.

I mention all of this because I always find it interesting when the Royal Oak gets rendered (case and bracelet) in a precious metal and not steel. A Royal Oak in gold makes sense because the color of the metal is so different that steel, but in metals like 18k white gold or platinum, the type of customer Audemars Piguet is likely reaching is easily very different that the man who wears a steel, 18k rose gold, or yellow gold Royal Oak. 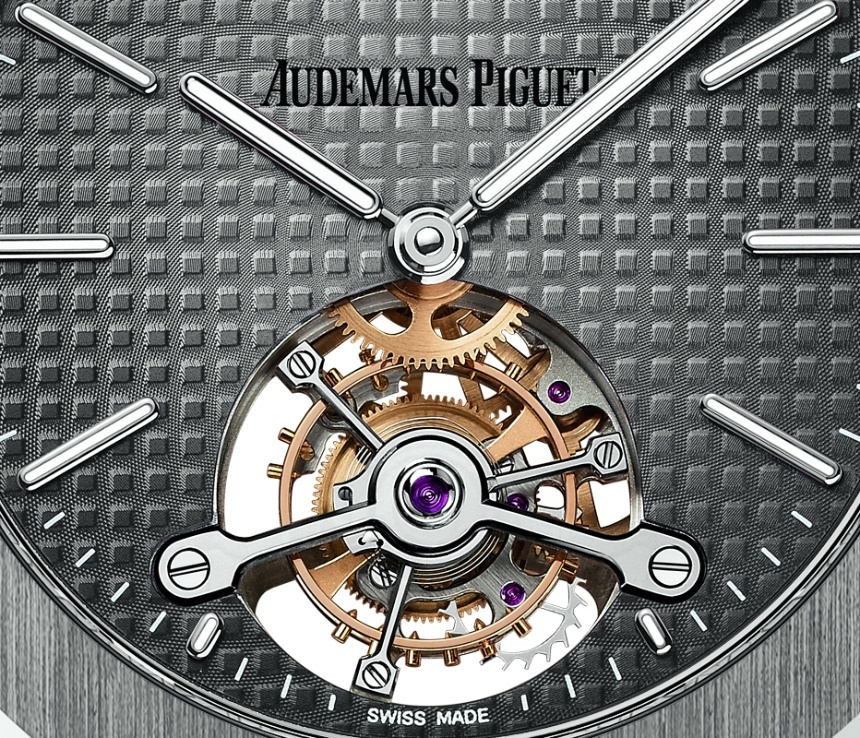 Moreover, the subtle and extremely non-pretentious “smoked gray” color of the “Mega Tapisserie” makes these platinum Royal Oak Tourbillon watches feel even more down to earth. Ignoring the diamonds on the gem-set model for a moment, and aside from the exposed tourbillons on the dial, these platinum Royal Oak watches almost look “reserved.” With that said, I think this gentle irony is something that a lot of collectors will appreciate. I have a sort of name for very expensive watches that don’t actually look that expensive, and that is an “F- you watch.” Why “F- you?” Because the timepieces goes against the traditional notion of conspicuous luxury, saying “most people don’t know I spent this much money on the watch, and even though it looks like something a bit less expensive, certain people around the world who are watch nerds like me will know what it is.” It is really saying “F- you” to the notion of at least being able to enjoy flaunting money a bit if you spend so much on an item like a wrist watch.

One of the things I find interesting, or at least curious, is that the 950 platinum version of the 41mm wide Royal Oak Tourbillon is water resistant to 50 meters while 18k gold model of the same watch is only water resistant to 20 meters. Maybe someone can tell me why that is? In any event, I am actually more curious as to exactly how much the Audemars Piguet Royal Oak Tourbillon Extra-Thin watch weighs. The Royal Oak has never had the thickest case or bracelet (by design), but there is nevertheless a fair amount of platinum metal in this timepiece.

If the standard reference 26510PT.OO.1220PT.01 Royal Oak Tourbillon at 41mm in platinum isn’t enough for you, then there is also the reference 26516PT.ZZ.1220PT.01 with the diamond-set bezel. Audemars Piguet didn’t want to ruin some of the characteristic traits of the iconic Royal Oak bezel, so the screws are retained and the 32 baguette-cut diamonds are placed between them. With roughly 3.04 carats of stones total, you get the increased luxury look of diamonds without interfering with the masculinity (or distinction) of the core Royal Oak design. 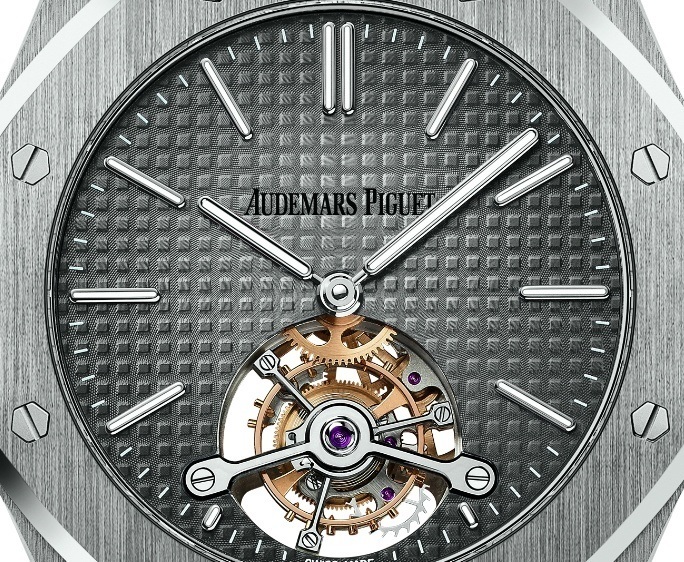 Inside the Audemars Piguet Royal Oak Tourbillon Extra-Thin is the in-house made Audemars Piguet calibre 2924 manually-wound movement. While the movement does require hand-winding, it does have a power reserve indicator placed on the rear of the movement, and it offers 70 hours of power reserve operating at 3Hz (21,600 bph). Produced from 216 parts, the calibre 2924 is just 4.46mm thick.

Iconic, stately, undeniably super high-end, and also actually somewhat edgy, the Audemars Piguet Royal Oak Tourbillon Extra-Thin 41mm watches in platinum will not be adored by all for their unapologetic lavishness, but if you are in the bracket of people who can afford them and have the personality to pull them off, this is among the few more conservative watches at this price point that can actually get you a “cool” compliment. Price is $178,600 without diamonds and $213,800 with diamonds. audemarspiguet.com