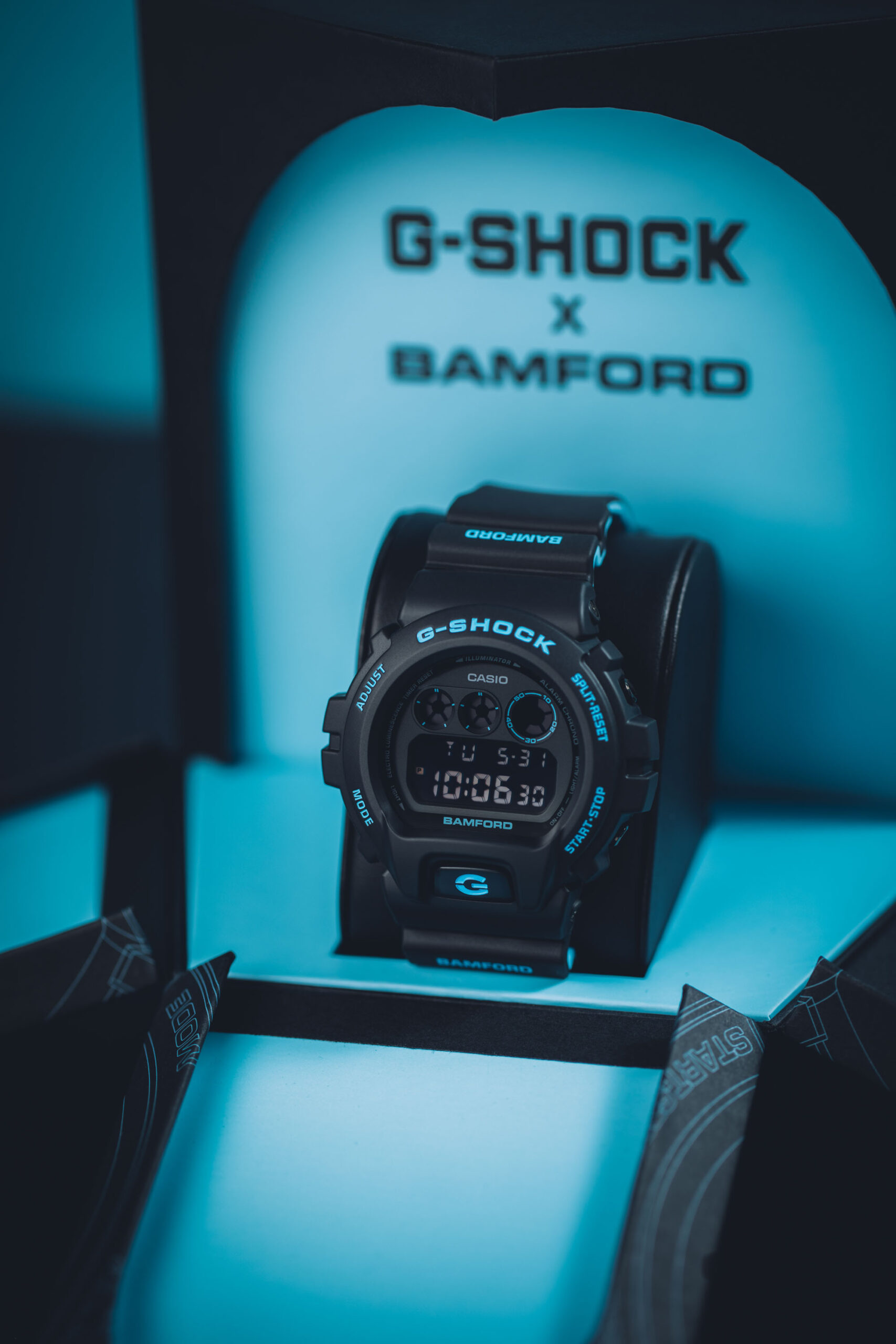 As the official authorized customizer for watch manufacturers like Tag Heuer, Bulgari, and Zenith, Bamford is a brand that frequently engages in collaborations. The London-based company now produces several of its own watch models in addition to offering its usual customization services, but Bamford also designs various collaboration pieces with other brands throughout the industry. Bamford’s latest release marks its second collaboration with G-Shock, after the first limited edition piece from 2020 sold out within just three minutes. The new Bamford x G-Shock DW-6900BWD-1ER watch uses the popular ref. 6900 as its foundation, which holds a special place in the heart of Bamford Watch Department Founder, George Bamford, as it was the very first G-Shock model he ever owned. 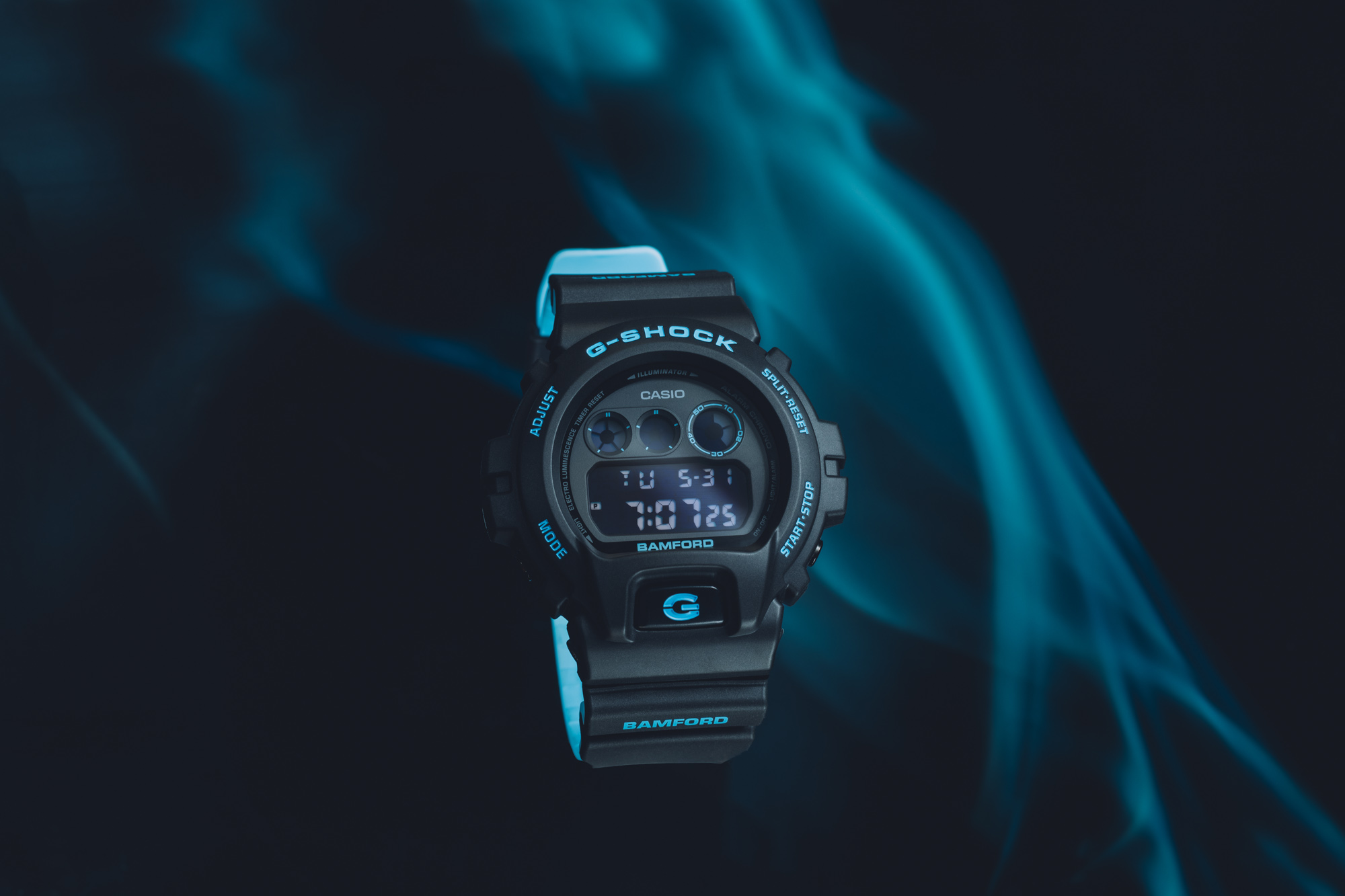 The ref. 6900 is easily one of the most recognizable G-Shock silhouettes, and its sideways D-shaped case will be instantly familiar to anyone who has even briefly encountered the brand. Next to the original 5600 “Square” model, which was the very first G-Shock design from 1983 and served as the basis for the original Bamford x G-Shock collaboration, the classic ref. 6900 is the only other G-Shock that could possibly qualify as being truly iconic. The ref. 6900 first appeared in 1995, and it is widely considered to be the model that helped make the G-Shock an inseparable part of streetwear and mainstream popular culture. 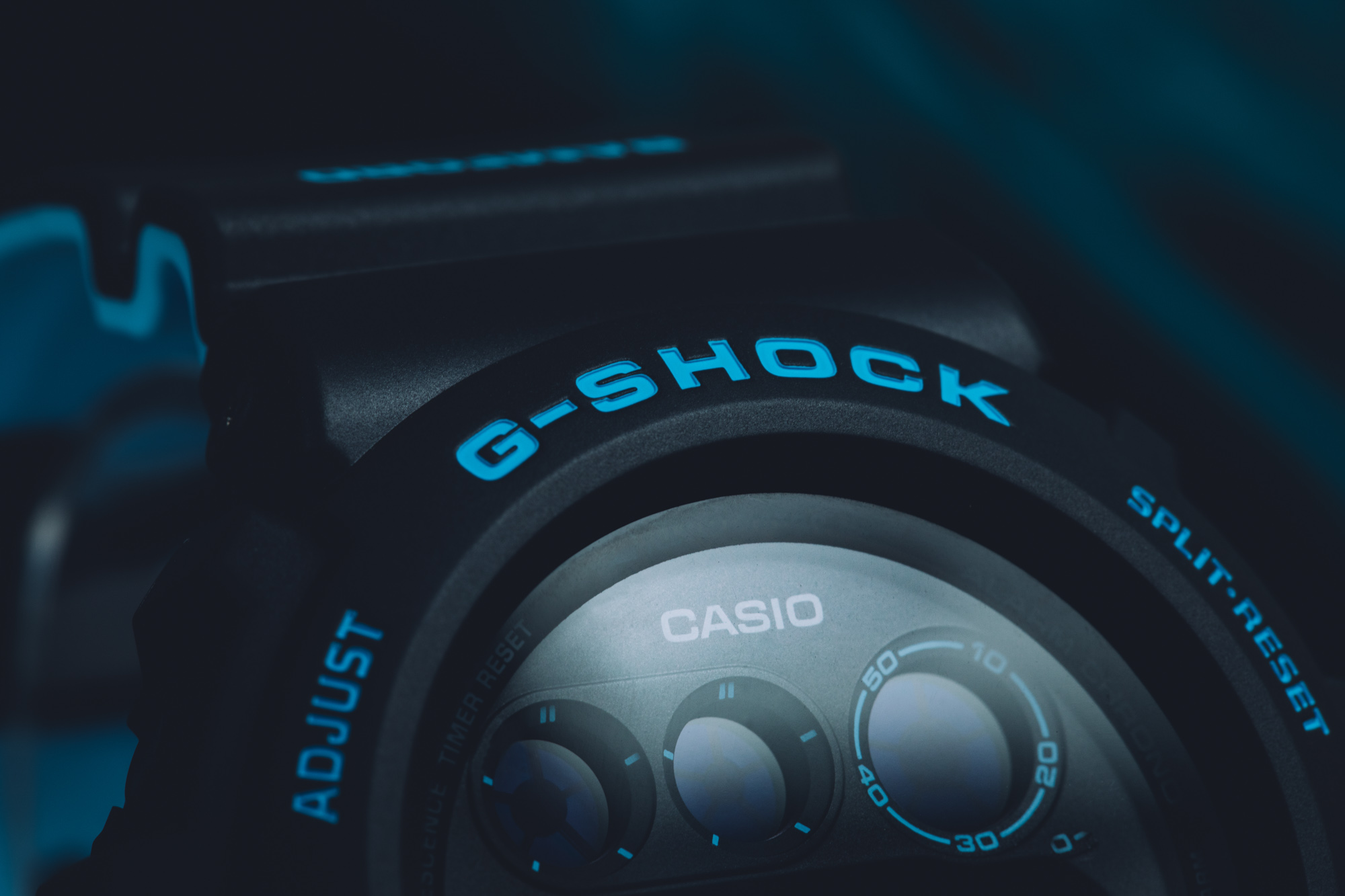 The case of the Bamford x G-Shock DW-6900BWD-1ER measures 53.2mm x 50mm and comes in at 18.7mm-thick. Like most G-Shock watches, the inner case is made from black resin and fitted with stainless steel buttons and a stainless steel caseback; however, on the new Bamford collaboration piece, these metal components are given a matching black IP finish. Covering the inner case is the G-Shock’s signature resin bezel, which is designed to help protect against impacts. Again, this component gets the Bamford design treatment and features its text in Bamford’s signature shade of aqua blue to match the stylized “G” on the center-mounted light button. 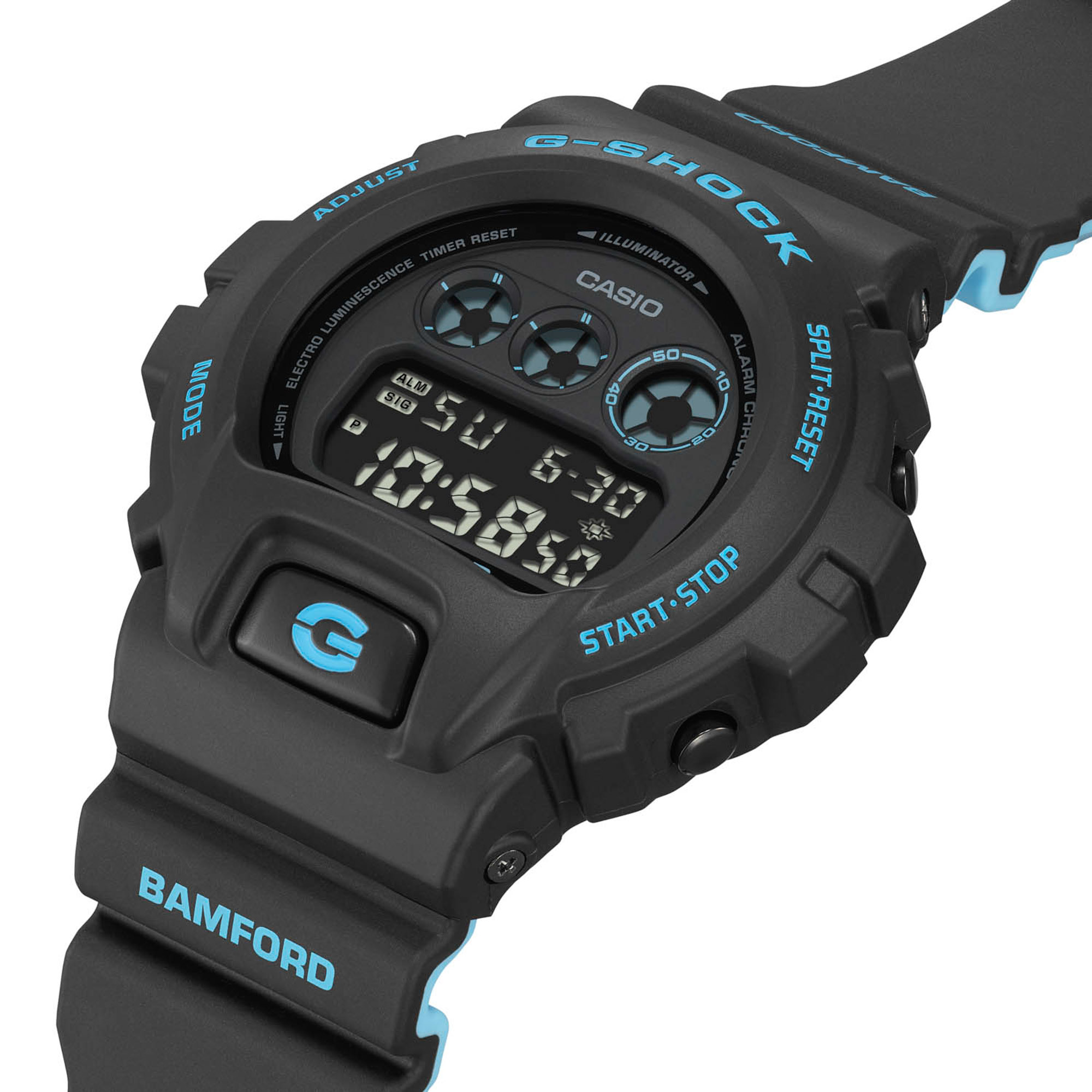 The black and blue colorway extends to the resin strap, which is black on the top with an aqua blue underside that is visible on the edges when the watch is being worn. On the top part of the strap is the “Bamford” name printed on either side in aqua blue letters, while completing the watch and matching its buttons and caseback is a stainless steel pin buckle finished with a black IP coating. What is interesting to note is that the blue accents aren’t all the exact same shade of aqua, and the Bamford x G-Shock DW-6900BWD-1ER features George Bamford’s new “Triple Blue” concept that utilizes three different shades of the brand’s aqua blue color to create a more dynamic overall appearance. 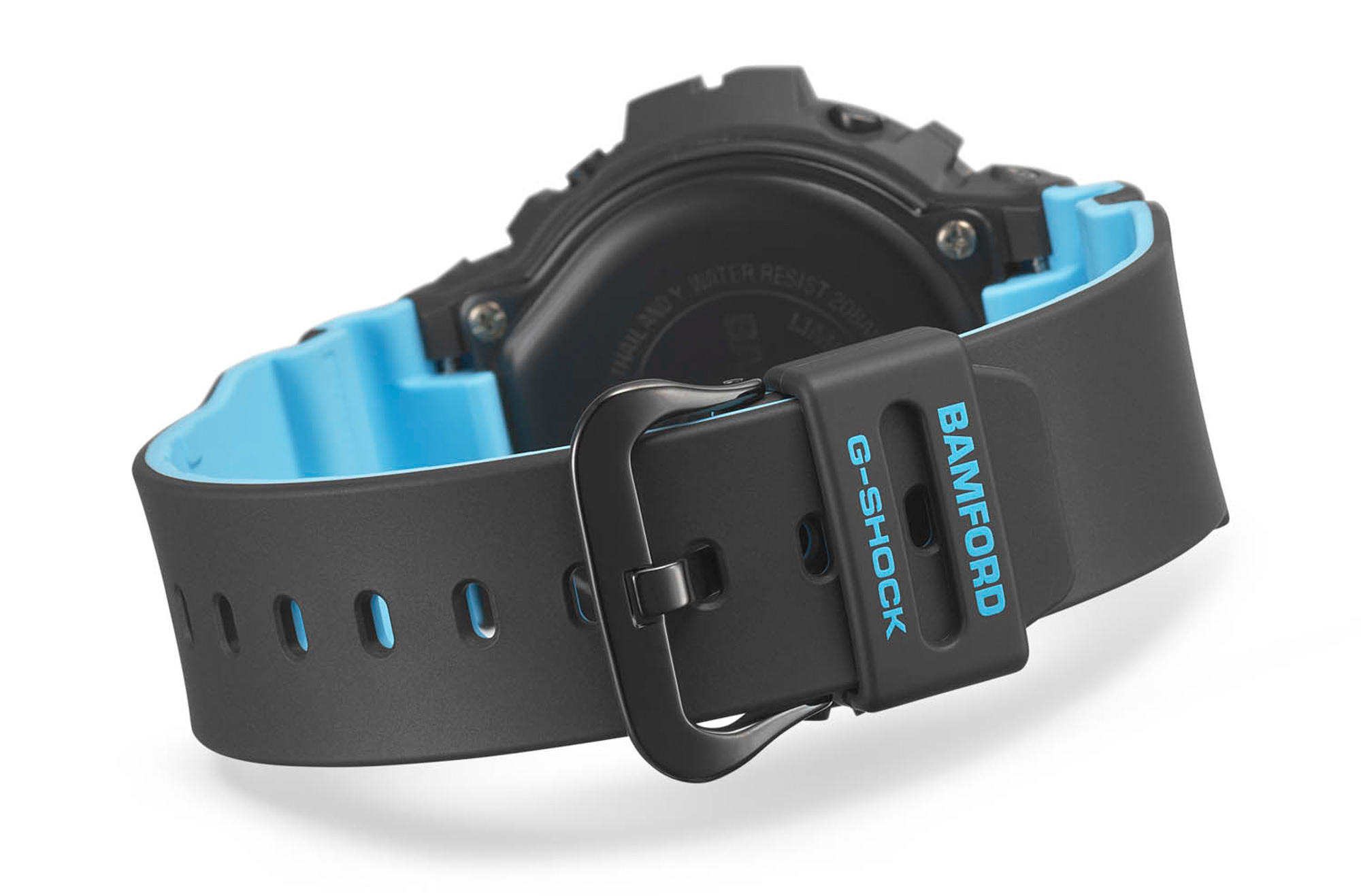 The dial follows the usual G-Shock 6900 layout and features a digital screen on the lower half with the model’s signature three circles appearing above it. On the Bamford DW-6900BWD-1ER, the dial itself is matte black with a negative LCD display, while pops of pale aqua adorn the trio of circles located on its upper half. The “Bamford” name printed below the screen appears in the same pale shade of aqua, while the rest of the text appears in gray letters against a black background for a more subdued appearance than the bright contrasting colors that are normally used on G-Shock 6900 watches. 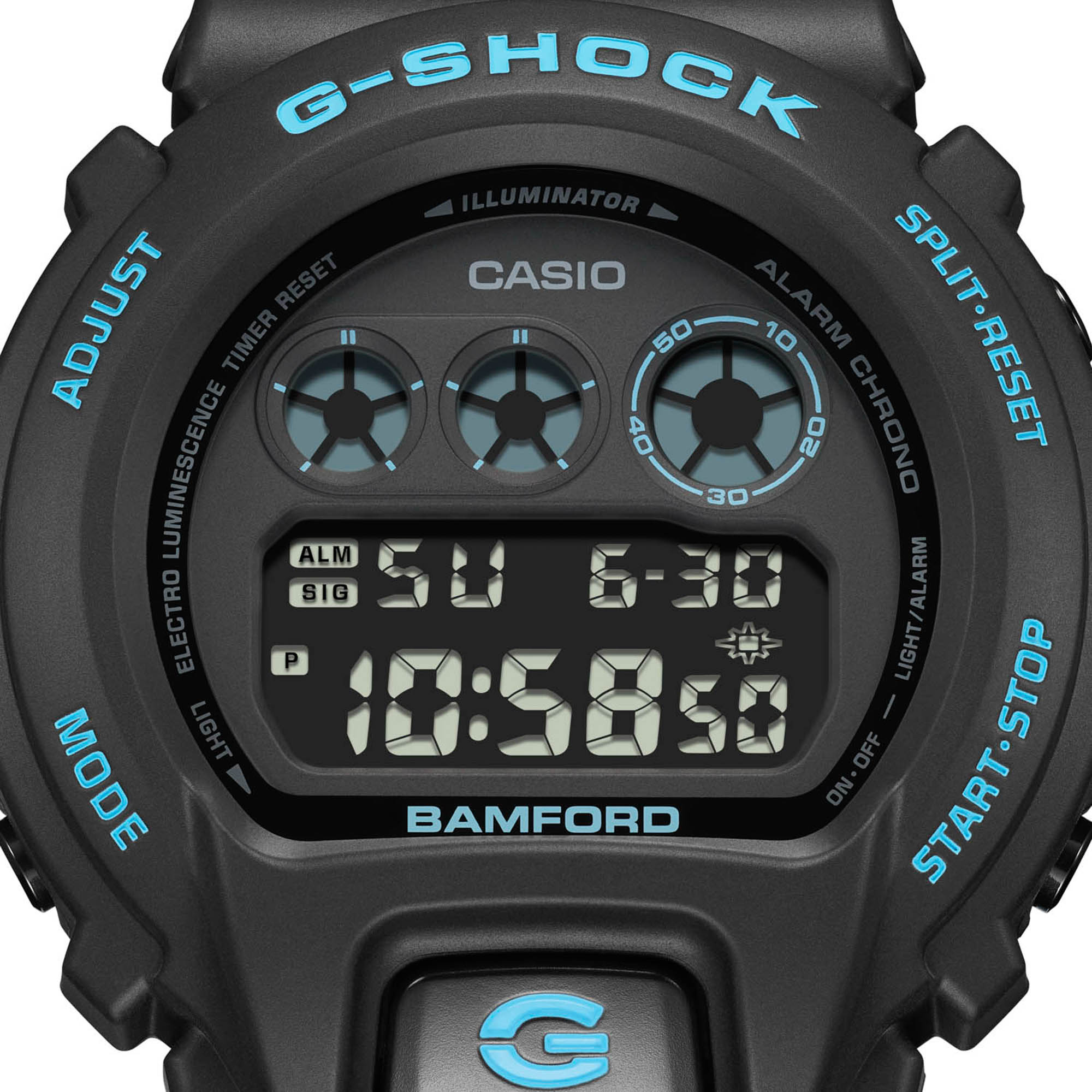 Inside the Bamford x G-Shock DW-6900BWD-1ER is the 3230 module, which is one of the standard multifunction digital quartz movements that G-Shock uses throughout its current-production range. Battery powered and offering an approximate battery life of 18-24 months, the 3230 module lacks some of the more advanced features like solar charging and radio-controlled timekeeping, but it still offers most of the functions typically associated with a digital watch, such as a stopwatch, countdown timer, auto calendar, multifunction alarm, and backlight. Additionally, just like other models that are produced under the G-Shock name, the Bamford DW-6900BWD-1ER collaboration piece is both shock resistant and water resistant to a depth of 200 meters.

For both Bamford and G-Shock, collaborations are a natural part of their respective brand identities. However, while most of G-Shock’s offerings occupy the more affordable end of the price spectrum, Bamford’s collaboration watches frequently have retail prices that start out at several thousand dollars. Not only does this place them outside the reach of some collectors, but there are also certain buyers who enjoy Bamford’s signature black and aqua blue aesthetic but would prefer it on a budget-friendly sports watch rather than a high-end luxury timepiece, and that is exactly what these new G-Shock collaboration watches promise to offer. The official retail price for the Bamford x G-Shock DW-6900BWD-1ER will be $170 USD in the special orchid-shaped box and $160 USD in the alternative packaging. The watch itself will be a limited edition, and the orchid packaging is only available for the UK nationwide and selected retailers. The new collaboration piece will be available first at the G-Shock Carnaby Street, London store on July 18th, 2022 and then followed by a global release on July 20th, where it will be available both online and at select physical retail locations. For more information, please visit the brand’s website.