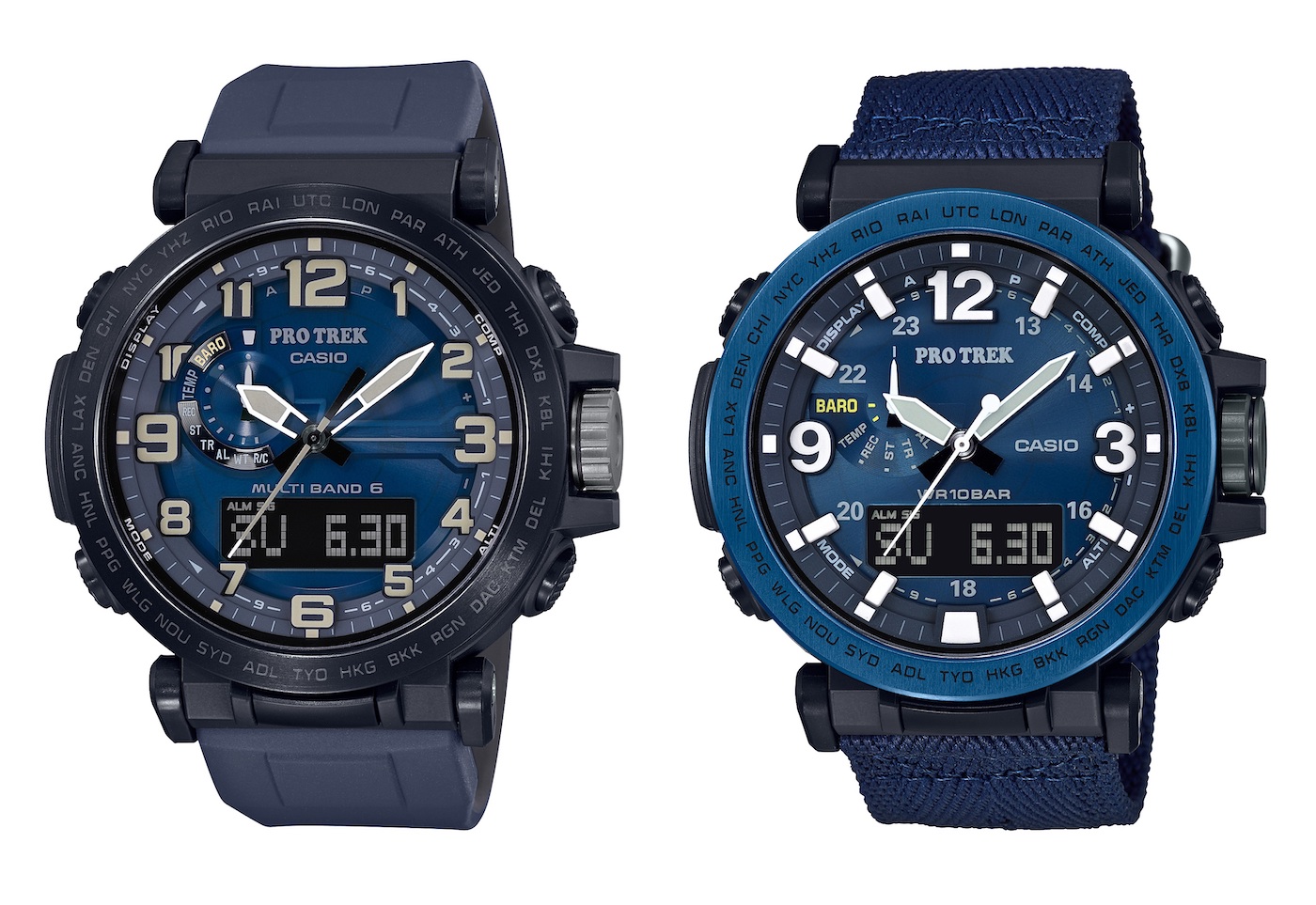 New for 2019, Casio unveils two new watches to the Pro Trek line. The Casio Pro Trek Midnight Navy Series adds a new “water-inspired” colorway to its “Ana-Digi” (Analog-Digital) offerings designed for use in the great outdoors. The PRG600YB and the PRW6600Y-2 have identical functionality but different styles. They are loaded with Casio’s established technology, for which the Pro Trek line is known, and are available at a reasonably affordable price.

“Full-screen” digital watches are incredibly common. In an era when smart watches make up a large portion of new releases, we’re quite used to seeing fully electronic displays, so I applaud Casio for sticking to this slightly anachronistic display style. Old school as it may be, I personally find analog watches intuitively easy to read. It is certainly easier to get a sense of time when glancing at hands, and for an outdoor adventure watch, that seems perfectly apt.

The brand has not released case diameters but does state that these watches have a 12.8mm profile. That said, I expect them to be rather large on the wrist. The ana-digi display looks very legible (an important quality when outdoors), and the dial is coherent. The PRG600YB-2 comes equipped with a nylon band, while the PRW6600Y-2 is fitted with a rubber strap. The case is said to boast water resistance of 100 meters, so these watches are more than comfortable with the odd dunking, but given that nylon is not the most comfortable wear once wet, I would probably plump for the PRW6600Y-2 with the rubber strap.

There are two real draws to the Casio Pro Trek models. First, they’re solar powered. Casio’s “Tough Solar” technology converts light to electricity that can last up to 7 months on a full charge. Further, it can charge off of some seriously low Lux levels, including minimal fluorescent light. So, even if stored in a space with minimal light, there is a low impact to the battery life. An added feature to the Pro Trek line is a cool power-saver option that powers the watch down when not exposed to any light for an extended period of time — for example, when the wearer sleeps. That means it’s possible for these watches to remain charged and functional for almost two years, without exposure to light.

The second draw is Casio’s Triple Sensor Version 3 Technology. There are three main components to this technology. First, the watches feature a directional sensor allowing for the watch to act as a compass. When activated, an angle value, direction indicator, and four directional pointers act as a dynamic compass that moves with the watch. Secondly, the watches feature a pressure sensor to allow for altimeter and barometer readings on the fly. Thirdly, a thermosensor allows the wearer to quickly check the temperature. Combined, these features make the Casio Pro Trek PRG600YB and the PRW6600Y-2 formidable outdoors watches for the budget conscious.

To list all the features this watch contains would require a portfolio (even the brand sends you to the website instead of listing them in the press release), so you can read more about them at the end of this article by clicking on the link below. The result is an incredibly functional watch at a very accessible price-point. The PRW6600Y-2 will come with an easy to swallow $350 price tag, while the PRG600YB-2 comes in even cheaper at $320, pitching them both in the same ballpark as the recently-released Casio Mudmaster. Read more at protrek.casio.com.