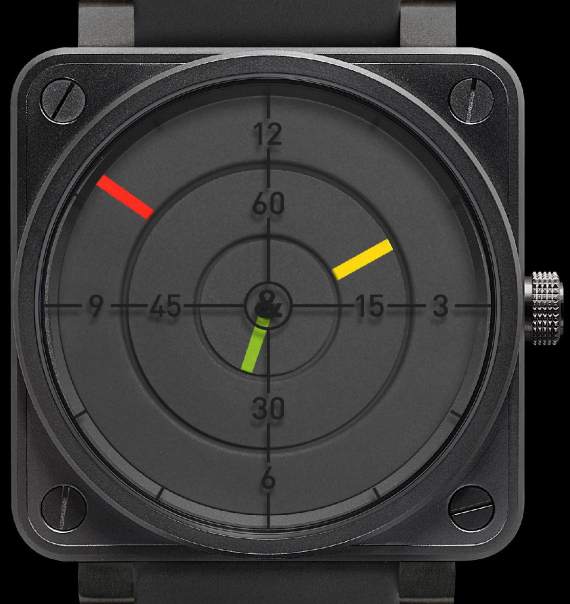 The below article was written by contributor Marco, who sells Bell & Ross watches.

By now, most people that know of it know that the Bell & Ross BR-01 watch was conceived to look like the instruments in an airplane cockpit — namely the altimeter or other similar analog gauges. Airplanes necessitate plenty of gadgets to run, however, so Bell & Ross has taken their Instrument idea and extended it to include an other important element of flight instrumentation — the Radar. The BR01 Radar will be produced in a limited edition of 500 pieces. It displays the time using three discs, each marked with a happily colored line to indicates a unit of time. This configuration emulates the sweeping light beam of the radar screen, but more importantly it creates a unique and fun look for enthusiasts of the BR-01 92.

The dial of the BR-01 Radar is what makes this watch peculiar. The traditional hands that point out the time have been replaced by three discs that are marked with colored lines. These discs, simple as they may be, actually took some tinkering with before becoming functional. This is because each disc is much heavier than the traditional hand that it replaces. Bell & Ross’ desire for perfection creates further problems for its engineers and watchmakers, because of the high level of precision necessary to assure that all three discs are perfectly aligned on the same plane, and that each gap between them is uniform and parallel. The original delivery date predicted by Bell & Ross had to be pushed back due to these technical challenges. [Ed. note – this watch was supposed to come out a while ago (last year), but these technical problems made it such that additional engineering was required to make it Bell & Rossable!)

While I am not exactly sure what the two axes represent on an actual radar screen, on the BR-01 Radar they are used as minute and hour makers with each graduation overlapping its respective indicators. The rest of the hours or 5-minute increments are marked at the perimeter of the crystal. The time is clear and easy to read once one gets over the initial shock of the dial’s peculiarity.

Aside from the dial, the rest of the Radar watch is a pretty straightforward BR-01 92 Carbon. It runs on a modified ETA 2892-A2 automatic calibre, which offers a power reserve of roughly 42 hours and benefits from the use of 21 jewels. The square case is 46mm wide and is fitted with a sapphire crystal and screw-locking crown. Its water resistance rating is 100 meters. Finally, thanks to removable lugs and specialized tools that come with the watch, you can also configure the BR-01 Radar as an automatic winding desk clock provided you have the Bell & Ross desk stand. 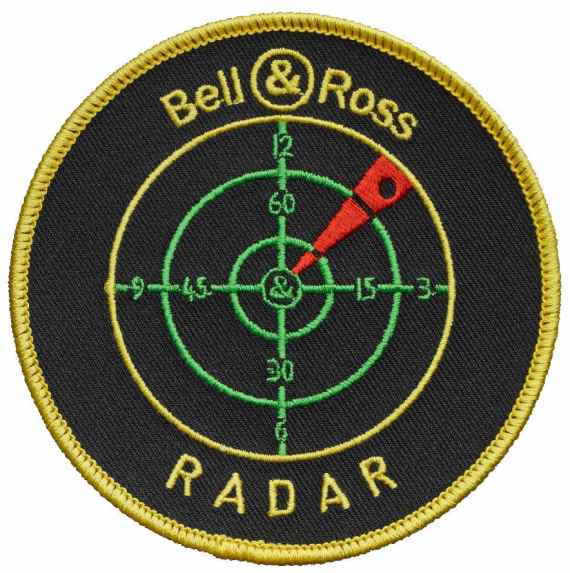 The limited edition Bell & Ross BR-01 Radar is collectible and different. As much as it is a serious, high-quality timepiece, its colorful indicators and peculiar arrangement make wearing the Radar enjoyable and fun. Like several of Bell & Ross’ latest limited edition BR-01s, the Radar is not a watch for everyone, but perfect for some [Ed. note – some-one].